YANGON - A powerful 6.8 magnitude earthquake that struck central Myanmar on Wednesday killed at least one person and damaged around 60 pagodas in the ancient city of Bagan, officials said.

The quake, which the US Geological Survey said hit at a depth of 84 kilometres, was also felt across neighbouring Thailand, India and Bangladesh, sending panicked residents rushing onto the streets.

At least one man was killed in Magway region where the quake struck, said Han Zaw Win, a local MP from Pakokku township.

"A 22 year-old man was killed when a nearby building collapsed during the earthquake," he told AFP, adding that a woman was also injured.

A local official reported heavy damage to several temples in Bagan -- Myanmar's most famous archaeological site and a major tourist destination some 30 kilometres north of the quake's epicentre.

"About 60 pagodas in Bagan were damaged. Some were seriously damaged," said Aung Kyaw, the director of Bagan's culture department.

A tourist police officer from Bagan confirmed the damage and said a Spanish tourist was slightly hurt when the quake knocked her from the temple where she was watching the sunset. 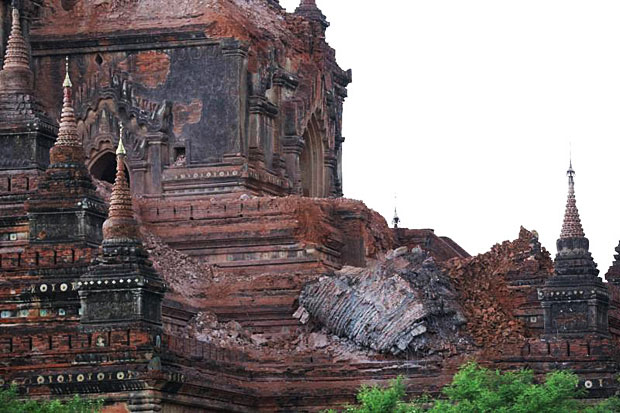 Malinda Perera, manager of Bagan Lodge, a luxury hotel, told Kyodo News the quake was the strongest to shake Bagan in recent years and lasted for about a minute.

"All of our guests rushed to the two assembly points outside the hotel calmly. They handled it nicely and weren't panicked at all," Malinda said.

"The hotel building wasn't damaged. Only some water glasses and plates were broken, the Sri Lankan said, adding, "It's still safe to visit Bagan."

Photos and video footage posted on social media showed what appeared to be severe damage at Sulamani Temple, one of the most popular temples for visitors to Bagan.

Scaling Bagan's ancient Buddhist monuments to watch the sun set over the city's 2,500 temples is a daily ritual among tourists and local pilgrims who flock to the site.

The temples, built between the 10th and 14th centuries, are revered in the Buddhist-majority country.

Myanmar, which has opened its doors to a rising tide of visitors since emerging from junta rule in 2011, is eager to see the ancient capital designated as a Unesco world heritage site.

The USGS estimated that the earthquake's impact would be "relatively localised" but noted that many buildings in the region are "highly vulnerable" to shaking.

Soe Win, a local MP from Chauk -- a riverside town close to the epicentre -- said it was the worst earthquake he had experienced in years.

"More than eight pagodas in town collapsed," he told AFP, referring to Chauk. "Two buildings collapsed as well, while some others were cracked. People in town are still scared."

The earthquake caused high-rise buildings in Myanmar's largest city Yangon to sway, as well as those in Bangkok and the Indian city of Kolkata.

The quake was also felt throughout south and southwestern Bangladesh close to the border with Myanmar, with residents running outside.

At least 20 people were injured as workers tried to flee a building in the Savar industrial district outside Dhaka, ATN Bangla television reported.

"All of us ran to the streets leaving the houses and shops unsecured as the quake seemed very dangerous," Nazmus Sakib, from the southern city of Chittagong near the Myanmar border, wrote on his Facebook wall.

Earthquakes are relatively common in Myanmar, although the country has not suffered a major one since 2012.