Although a new theory denies Sukhothai being the first capital of Thailand, no one can refute the fact that it was one of the most important kingdoms in Thai history. It was where the Thai language, the unique lotus bud-shaped stupas and the beautiful Sukhothai-style Buddha images were created. This year, Sukhothai Historical Park celebrates its 40th anniversary and has new sites for visitors to explore. 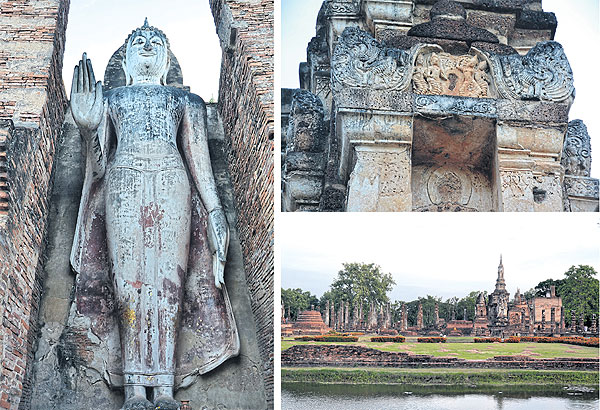 Wat Maha That is in the heart of the ancient town of Sukhothai and built in the ancient Indian Mandala style. Wat Maha That was a symbol of each city with Buddhism and dhamma followed by its kings. It boasts a main chedi (stupa), a vihara (praying hall), mondop (pillared outdoor hall) and ordination hall, as well as 200 subordinate stupas. The main chedi is in the shape of a lotus bud, the typical style of Sukhothai art, and is surrounded by eight other chedis. The base is decorated with stucco reliefs of Buddhist disciples walking with their hands clasping together in salutation. Pichaya Svasti

Visitors no longer have to look at ruins of palaces and temples or ancient artefacts only. They can now have fun learning about the history from well-trained staff and multimedia presentations.

On Dec 12, 1991, Sukhothai Historical Park covering 70km² was declared a World Heritage Site by Unesco as part of the Historic Town of Sukhothai and Associated Historic Towns -- Si Satchanalai and Kamphaeng Phet.

Sukhothai governor Piti Kaewsalabsi said: "Sukhothai gives importance to the Sukhothai Historical Park and the development of cultural tourist attractions for economic and social benefits. We have sustainable tourism promotion strategies to improve tourist attractions by improving landscape, facilities and transportation routes and developing services, safety and tourism promotion activities. The public, private and people's sectors are encouraged to participate in the work process."

Anandha Chuchoti, director-general of the Fine Arts Department, said the department registered the old city of Sukhothai as a national historic site in 1936 and started conducting studies and conservation work in 1953. In 1976, the cabinet permitted the department to develop the old city covering 1,600 rai as a historical park. 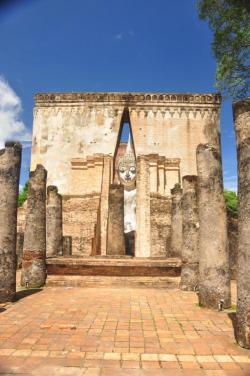 Wat Si Chum is just outside the city walls of Sukhothai, at the northwest corner. It is famous for a large sitting Buddha statue whose lap is 11.3m wide and occupies almost the entire vihara (prayer hall). The statue is named Phra Achana, which means 'one who is not frightened', as mentioned in the First Inscription. The image is built with brick and stucco in the subduing mara posture with a symbolic hand gesture known as a 'mudra', which meaning 'determined and not distracted', according to Indian tradition. Photo courtesy of Sukhothai Historical Park

Last year, 827,000 people visited the park, including about 400,000 visitors during the Loy Krathong Festival in November, when the park hosts big celebrations. From January to July this year, the number exceeded 900,000 due to increasing tourism activities. From February to September, the retro-style market and a mini light and sound show are held on the first Friday of each month at Wat Sa Si.

Sathaporn Thiangtham, director of the Sukhothai Historical Park, said: "We try to adjust tourism approaches and opt for slow life, environmental conservation, cycling and tram riding. Fewer personal vehicles will be allowed into the park. There will be a hop-on hop-off tram service and bicycle riding in the park." Currently, tourists must hire an entire private company-owned tram like a taxi. The park boasts an information centre, which focuses on providing knowledge of history and archaeology, and put up signs with suggestions for tourists. Although the park has only two archaeologists and four assistants to guide and lecture visitors and a limited budget, it tries to make prudent use of its resources.

The ancient city of Sukhothai stood on the northern edge of the Chao Phraya River Basin. In the middle of the 13th century, the city came into existence as a result of the establishment of Lop Buri, the largest city on the Central Region's river basin. The Wat Si Chum Inscription states that Phor Khun Bang Klang Hao, or Phor Khun Sri Intrathit, became the second king of Sukhothai after he helped his friend Phor Khun Pha Muang, a son of Phor Khun Si Nao Nam Thom, the first monarch of Sukhothai, to fight a Khmer coup-maker, and his friend decided to give him the throne.

This city flourished in the reign of the third monarch King Ramkhamhaeng. Mahayana Buddhism from the ancient Khmer empire was gradually replaced by Theravada Buddhism from the southern city of Nakhon Si Thammarat. The most glorious things were the king's creation of the Thai language and unification of many towns. After his grandson King Lithai's death around 1371, Sukhothai became influenced by kings of Ayutthaya for about 50 years. It finally merged into Ayutthaya's Northern Region in 1438.

According to Sukhothai inscriptions, the city of Sukhothai was rectangular in shape -- 1.3km wide and 1.8km long. Outstanding innovations of Sukhothai were the irrigation system, including Sa Reed Phong Dam, or an earthen dyke, Barai, or ponds numbering 80, and water pipes. Named after a Sanskrit word meaning dam or dyke, Sa Reed Phong is about 3km away on the southwest side of the city.

Apart from the ruins of numerous temples and Ramkhamhaeng National Museum, the Sukhothai Historical Park has kiln sites for visitors to learn about the history of pottery making. About 52 kiln sites have been discovered in the historical park outside the north wall near the dyke of Wat Phra Phai Luang.

Thongchai Sako, an archaeologist of the historical park, said: "Only about 50 out of 70 kilns in Sukhothai remain. The rest has been lost to farming and treasure-hunting in the area."

This year, the Fine Arts Department allocated a budget of 250,000 baht for the park to conserve the kiln sites. All grass and weeds in the area north of Wat Phra Phai Luang were cleared to make way for the excavation of three new sites near the old kilns found 30 years ago.

"The director-general wishes to develop the Sukhothai World Heritage site and add tourist attractions to other zones besides the centre," director Sathaporn noted.

This year, moats and dykes around Wat Phra Phai Luang were dredged and cleaned, while Wat Si Chum was cleaned and developed with a new car park, a ticket office and dyke dredging. More kiln sites were surveyed.

Next year, the kiln sites east of the old city will be excavated. In 2018, a kiln site museum project like in Si Satchanalai will be considered. If approved, the bidding and design process will begin.

Outside the Sukhothai Ancient City area, the department has been restoring a 200-year-old Tripitaka library at Wat Thung Noen Phayom in Kong Krailart district and the 168-year-old ordination hall of Wat Nong Wong in Sawankhalok district.

"Sukhothai is an ancient city significant to Thais. It is an important World Heritage site, but few people seriously study it. The Thai people should do it, not just taking photos. We should learn about history, take care of and conserve Sukhothai to last forever," director Sathaporn added. 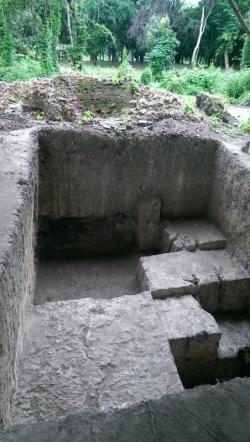 Tao Thu Rieng kilns in the old city of Sukhothai were a major production source of pottery. The entire kiln site covers 5,000m² in the Sukhothai Historical Park outside the northern city wall. The emergence of these kilns was in support of the kilns in Si Satchanalai, which was superior in terms of firing techniques and glazing. Pottery from the Sukhothai kilns had a less delicate texture and was for family use and domestic sale rather than for export. The kilns on the west side of Wat Thuriang are cross-draft, or prathoon, kilns with high temperature for firing high-quality porcelain and decorative art, and those in the east are up-draft, or takrub, kilns with a lower temperature for producing lesser-quality pottery. These kilns are about 600 years old and were built in the late 14th-early 15th century. The recent excavations at three new sites found pieces of white-glazed black pottery with one-, two- and three-fish patterns, accessories for women, earthen figurines, roofing and decorative ceramics, fragments and moulds of votive tablets and a bronze bowl. One of the three sites was probably a religious structure, not kiln. Pichaya Svasti 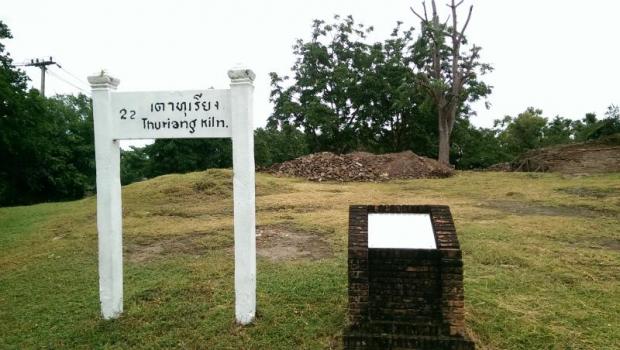 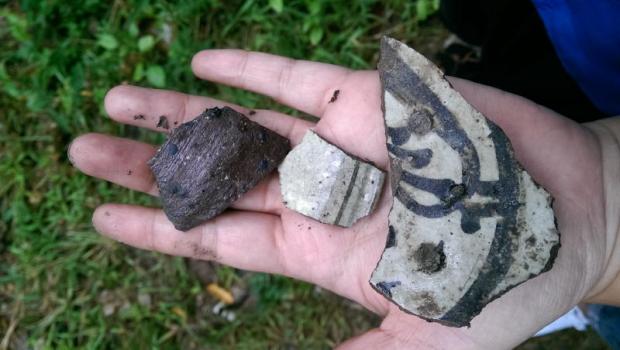 Sangkhalok refers to ceramics made in Sukhothai and Si Satchanalai during the Ayutthaya period. The name is derived from Sawankhalok, the name that people in the Ayutthaya period called the town of Si Satchanalai. Back then, ceramic items were glazed in different colours, such as brown or pale blue, with a transparent coating over decorative designs. They were exported to Ayutthaya, the south of present-day Thailand, Japan, the Philippines, Indonesia and other places. Pichaya Svasti 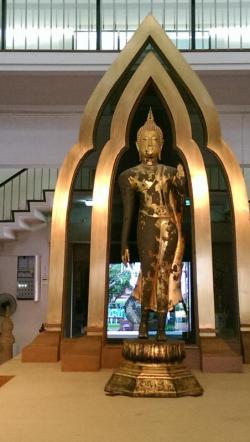 Ramkhamhaeng National Museum attracts about 70,000 visitors each month. Unlike most museums, which are closed on Mondays, it is open daily because it is in the World Heritage area. Highlights include one of the country's finest walking Buddha statues, inscription stones featuring Thai, Mon, Sanskrit and Pallava characters, and the life-size model of Wat Si Chum Tunnel, which kept numerous votive tablets. The upper floor of the museum portrays the way of life and economy in the Sukhothai period, especially the sale of pottery called Sangkhalok. Pichaya Svasti 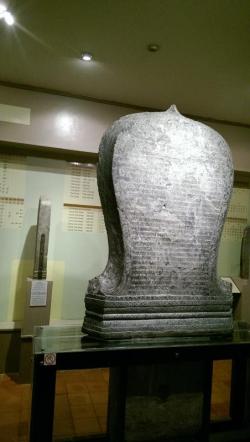 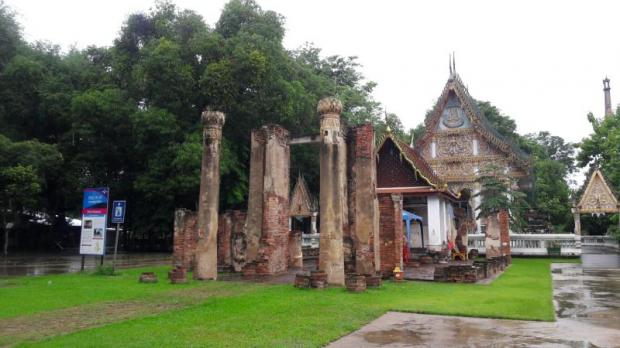 Wat Thung Noen Phayom is in Pa Phaek, Kong Krailart district. The royal chronicle of Krung Thonburi states that the temple was burned by some of the 15,000 Burmese invaders in 1775. The temple was later rebuilt by locals. The principle Buddha image is a Sukhothai art form. The Fine Arts Department is restoring the 7.6mx7.6m wooden Tripitaka library, or Hor Trai, in a big pond based on an old photo. Pichaya Svasti Wat Nong Wong is a royal temple in Muang Bang Yom, Sawankhalok district. It was established in 1699. In the past, it was called Wat Nong Ong for being a resting point for Mon jar vendors who travelled by boat on the Yom River. The ordination hall was built by a governor of Bang Yom Town in 1848. The principle Buddha statue is made of brick and stucco in the Sukhothai art style and in the subdued Mara posture. The interior walls sport murals of the 10 lives of the Lord Buddha. The ceiling is decorated with gold lacquered wooden flowers. The Fine Arts Department is mending the roof, doors, windows, walls, ceiling and floors of the hall, as well as five Buddha statues. Pichaya Svasti 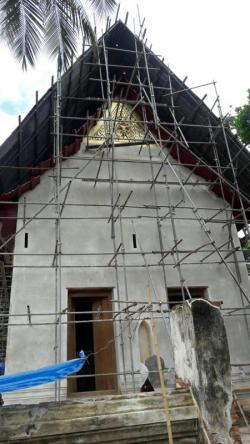 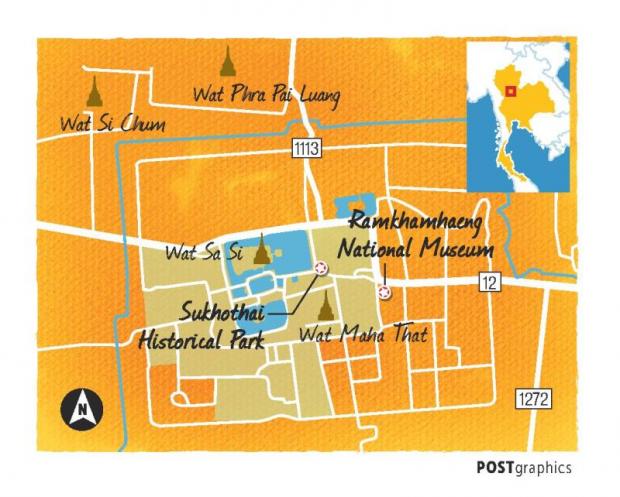 The Sukhothai Historical Park is on Highway 12 about 12km from the centre of Muang district and opposite the Ramkhamhaeng National Museum. It is open daily 6am-9pm. Call 055-697-527.