Back to nature
Travel

Besides the popular Bridge on the River Kwai and Death Railway, a national park await visitors in Kanchanaburi

published : 8 Dec 2016 at 04:00
newspaper section: Life
writer: Pichaya Svasti
It is enjoyable for tourists to go rafting and cruising on the Kwae Noi River. The river starts from watershed areas in the western region's evergreen forests along the Thai-Myanmar border. Hiring a six-seater boat to cruise the river around Sai Yok Yai Waterfall for 45 minutes costs 400 baht. Pichaya Svasti

Kanchanaburi has long been a popular destination for day trippers. However, the scenic Sai Yok National Park and several caves and rafting on the Kwae Noi River seem overlooked by Thai tourists. These places are worth visits besides the infamous Death Railway and the Hollywood-misnamed "Bridge On The River Kwai" that remain popular tourist spots.

Nestled 98km from the town of Kanchanaburi is Sai Yok National Park covering 958km² of forested land in Sai Yok and Thong Pha Phum districts. Declared the country's 19th national park on Oct 27, 1980, it is full of mountains, mostly limestone ones, stretching from north to south. Its western border is adjacent to Myanmar.

Nature is abundant there. This park mainly consists of mixed and dry evergreen forests (pa benjaphan and pa dib laeng). Along the Kwae Noi River are narrow strips of teak trees.

This national park is home to many wild animals, including elephants, gaurs, bantengs, tigers, boars, deer and a variety of birds. Interestingly, it is the only habitat of Kitti's hog-nosed bats (bumblebee bats) and regal crabs.

Rafting along the Kwae Noi River is a relaxing experience because the current is gentle and there are no rapids. If you are interested, you can cruise from the waterfall for about 150km further to reach where the Kwae Noi River merges into the Kwae Yai River to form the Mae Klong River and approach the Bridge on the River Kwai.

On the way back to Bangkok, tourists may want to visit Kanchanaburi's newest attraction "Mallika R.E. 124 The Siamese Living Heritage Town" in Sai Yok district and Surasee Camp Floating Market (Prommitr Film Studio) in Muang district. The former is a themed park where visitors can travel back in time to more than a century. The latter is where the famous film series King Naresuan and several other movies were filmed. Another must-see, especially for motorcyclists and collectors, is LHM Motorcycle Museum in Tha Maka district displaying a vast collection of motorcycles since the aftermath of World War II.

If you feel hungry, you can fill up on delicacies like pla raed and pla khang, and termite mushroom dishes for which several local restaurants are famous, or snack on fruits like melon and strawberry grown alongside the road leading to the national park. In Tha Maka, well-known dishes are pork noodles and kao kriab pak mor (steamed noodles with vegetables). In the end, you will return home with a happy heart, full stomach and smiley face. 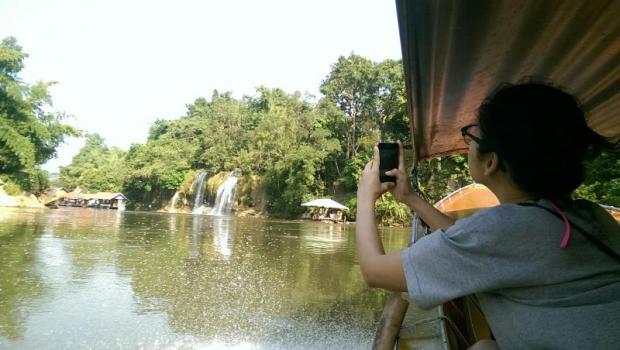 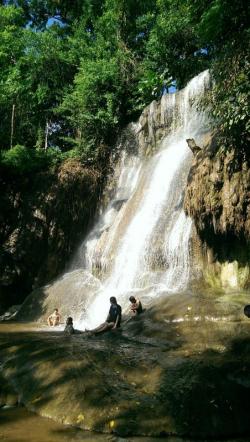 Sai Yok Noi Waterfall, or Khao Phang Waterfall, is in Kanchanaburi. The environs around the fall are shady and beautiful with unspoiled nature, especially in the rainy season during July-October. A steam locomotive used during World War II is exhibited near the fall to commemorate the construction of the Death Railway. Historically, King Rama V visited the falls in 1888. Located near Highway 323 (Kanchanaburi-Thong Pha Phum), it is accessible by car and train. Admission is free. 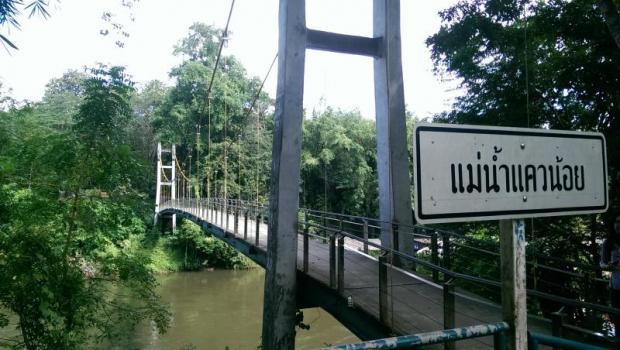 Sai Yok National Park has several attractions, including Sai Yok Yai Waterfall, Sai Yok Lek Waterfall, Old Railway Bridge, Sai Yok Cave, Phra Cave, Japanese Stoves, Nature Trail, Bat's Cave and Watershed. All these places are nearby each other and can be visited in one day. The park has bungalows, camping zones and tents for visitors to stay in. Visit www.dnp.go.th or call the park on 034-516-163. Pichaya Svasti 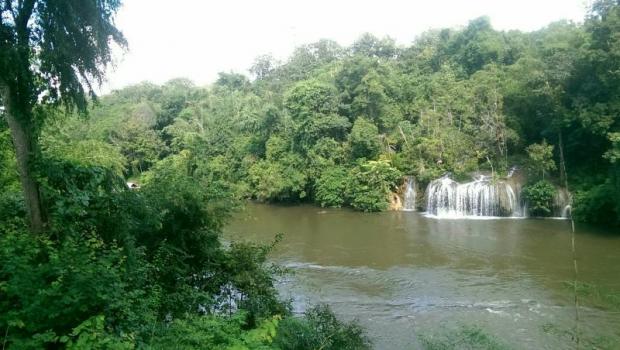 Sai Yok Yai Waterfall, or Khao Chon Waterfall, is one of the two major waterfalls that flows into the Kwae Noi River. The other fall is Sai Yok Lek further down the river. The Old Railway Bridge is between both falls. Sai Yok Yai Fall is 8m high from the ground and is lush throughout the year. It is not only beautiful but also historically significant for being visited by King Rama V twice in 1877 and 1888. The king was accompanied by one of his brothers HRH Prince Narisara Nuvadtivongs, who admired the beauty of this waterfall and revised and renamed classical song Khamen Klom Luk as Khamen Sai Yok, which is well-known. Visitors can enjoy the serene and pristine beauty of this waterfall from the bank and while cruising boats or while rafting. Pichaya Svasti 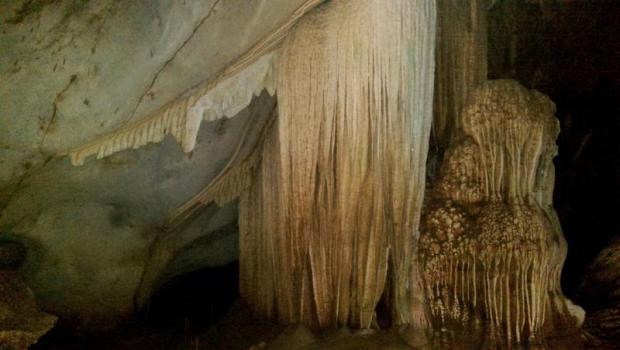 Located on a road leading to Pak Saeng Pier 18km off Highway 323, Lava Cave is 25m high from the ground and 385m deep into a mountain. It consists of very beautiful stalactites and stalagmites, and several chambers — Hanuman, Crocodile, Music, Bats and The Curtains of The Royal Chamber which were named after shapes of rocks. It takes about 45 minutes to stroll Lawa Cave Trail after climbing a 100-flight staircase. The cave is well-equipped with lights. Admission fee per head is 100 baht for adults and 50 baht for children. 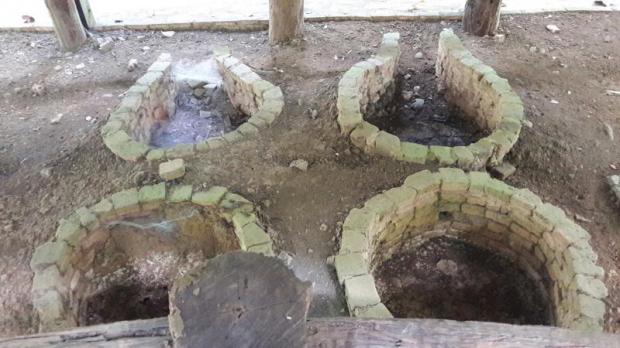 During World War II, Kanchanaburi was used as a base by the Japanese Imperial Army to invade British Burma. More than 200,000 Western prisoners of war and labourers from other parts of Southeast Asia were forced to build the infamous Death Railway to move the troops, weapons and supplies. Over 40,000 of the war prisoners died of malaria and war-related causes. The construction ended when Japan lost the war in 1945 and ended its occupation of Thailand. The Japanese troops took Sai Yok Waterfall to be their camp, kitchen, prison for war prisoners and bunkers. 6 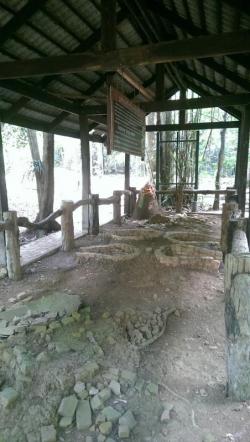 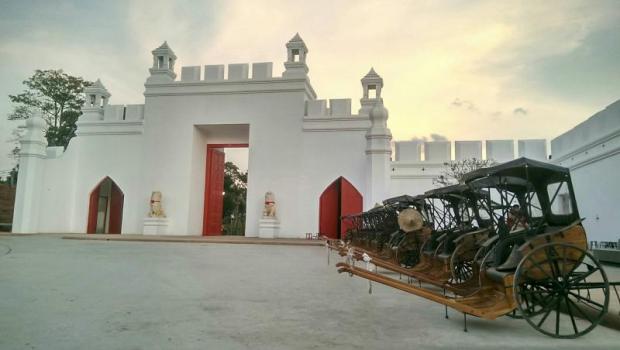 Mallika R.E.124 The Siamese Living Heritage Town takes you back to the reign of King Rama V in 1901. It is located on a 60 rai land plot in Sai Yok district about 30km from the town. Walking or taking a rickshaw ride through the old-style city gate, you will first see Talat Saphan Han, a market on a bridge. Stepping through a neoclassical gate, which resembles the gate of Bangkok's Phraeng Sappasart, you will reach an old business district with numerous shops selling traditional perfumes, candles, clothes, other goods and authentic Thai dyes. You must make payment with replicas of ancient coins at the money exchange rate of 1 satang for 5 baht. Vendors dressed in traditional Thai costumes greet you with the old-style words chao kha and khorub. You will enjoy a lot of photo opportunities with replicas of old buildings and things ranging from a tower, four traditional houses, a barn, a floating market and more. About 400 staff members don traditional costumes and speak old-style words and visitors can do it, as well. Traditional Thai costumes can be rented at the prices of 200 baht for women, 100 baht for men and 50 baht for children. The themed park is open 9am-8pm daily. Admission per head is 250 baht for adults, 120 baht children, the elderly and the disabled. Visit www.facebook.com/ MallikaR.E.124 or call 034-540-884. 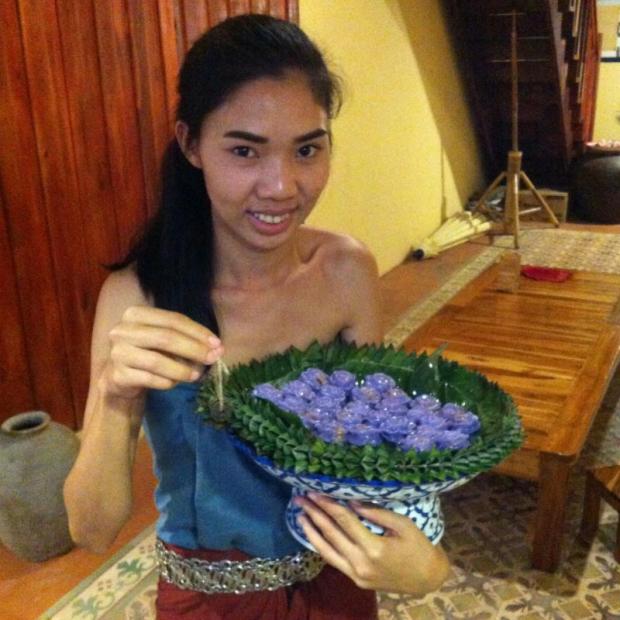 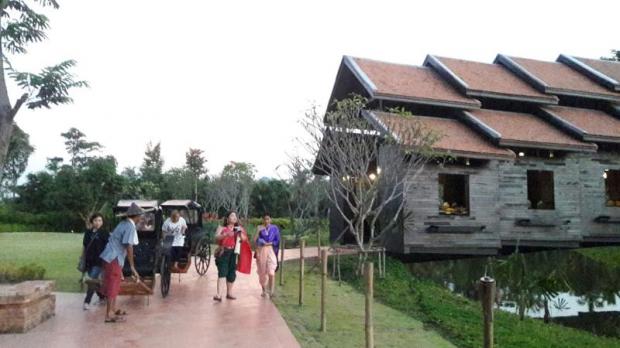 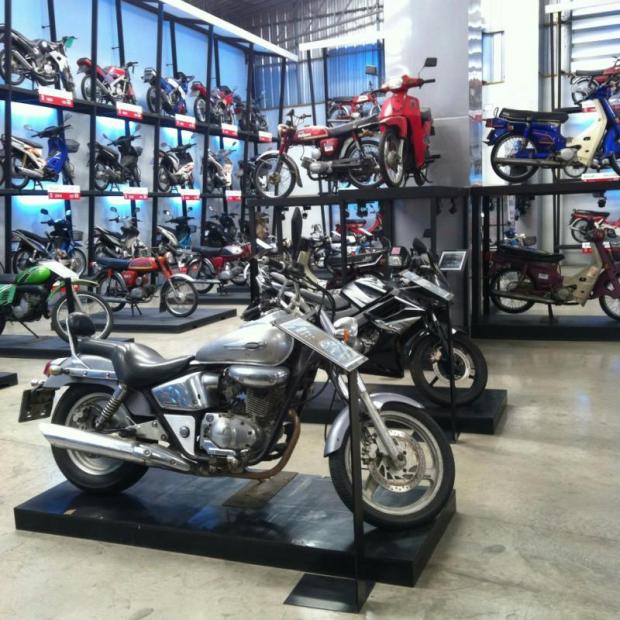 LHM Motorcycle Museum belongs to Lo Heng Mong motorcycle shop in Tha Maka district, which has been in the business since 1964. It showcases its vast collection of motorcycles of all Japanese brands and some Western bands since the aftermath of World War II, as well as exhibitions on Honda and Yamaha motorcycles and posters. The museum is open during 8am-5pm daily. Admission is free. Visit www.facebook.com/LHMmotor or call 034-561-028. 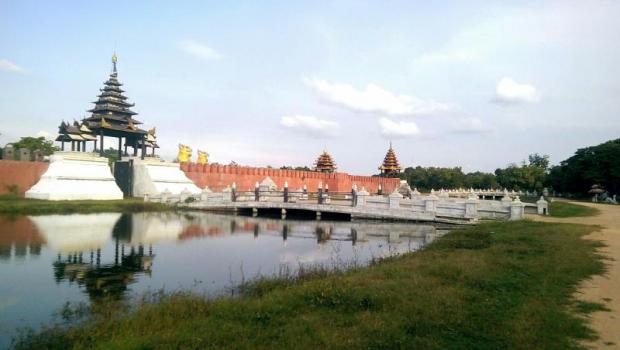 Surasee Camp Floating Market, or Prommitr Film Studio, is in the compound of Surasee Military Camp in Muang district, Kanchanaburi. The settings depict old cities, palaces, temples and villages. A tram tour with a guide is available for 100 baht per head for adults and 50 baht for children. During each tour, visitors will be led to visit the life-size models of Wat Phra Mahathane Khanchong in Bago, Myanmar, Hanthawaddy Palace, Singha Palace, Yodia Village, Ancient Khmer Palace, Sanphet Prasat Throne Hall of Ayutthaya Kingdom and more. Visitors will enjoy photo opportunities outside and inside the beautiful sets and shopping at the floating market. The film studio is open 9am-6pm daily. Visit www.facebook.com/floatingmarket kanchanaburi or call 034-510-428.