published : 15 Dec 2016 at 04:00
newspaper section: Life
writer: Patcharawalai Sanyanusin
The Ruins of St Paul's refers to the three-storeyed sculpted stone façade that remains of the ancient Church of Mater Dei and its adjacent St Paul's College, which was the first Western-style university in the Far East. The church and the college were built in the early 1700s and were destroyed by a fire 200 years later. Located on the same grounds is the Museum of Sacred Art and Crypt. There is no admission fee. The two bronze statues in front of the base of the grand staircase to the Ruins of St Paul's symbolise the handover of Macau from Portugal to China. The male statue represents Portugal, the female statue refers to China and the lotus in her hand signifies Macau. Patcharawalai Sanyanusin

When people think Macau, the first thing that comes to mind is casinos. That was also the case with me. But my perception has changed after a recent trip, which made me realise that there is a lot more to discover in this gambling capital of Asia.

On the southeast coast of China in the South China Sea, 30.3km² Macau (also known as Macao) is made up of a main peninsula and two islands -- Taipa and Coloane. Linking the populous and historic peninsula with the less busy Taipa are three bridges, the longest of which is the 4.4km Friendship Bridge. The largely rural Coloane is joined to Taipa by a strip of reclaimed land called the Cotai Strip.

The city's skyline is dominated with dozens of large and luxurious hotels with round-the-clock casinos. Many of them belong to Las Vegas casino moguls. According to the Macao Government Tourism Office, this sleepless city has 48 casinos.

So, it's a surprise to find that hidden not far from those neon-lit palaces of chance are distinctive buildings, each filled with an interesting past, waiting to be explored.

Like Hong Kong, which is 60km to the east, Macau is another special administrative region of China after Portugal transferred sovereignty to the "motherland" nearly 17 years ago.

However, four centuries under the Portuguese Empire, which settled in the territory in the mid-16th century, have left many architectural legacies which, when enhanced with Chinese roots, make Macau unique.

The harmonious coexistence of the two cultures is evident in the Western side of the peninsula where the Historic Centre of Macau is located. Listed as a World Heritage Site in 2005, it comprises 22 historical buildings and eight urban squares, many of which are within walking distance from one another. Several narrow roads are lined with open store fronts that sell a variety of delicacies. The roads are rather steep due to the hilly landscape.

Among the most frequently visited locations that reflect Macau's Western architectural wealth from the early years of Portuguese colonisation are the Ruins of St Paul's, St Anthony's Church, St Dominic's Church, House of Mercy, St Augustine's Church and St Lawrence's Church. Though each one has undergone several restorations.

The historic centre also includes a Mount Fortress where one can get a full view of Macau; Guia Fortress, which houses a chapel and a lighthouse; the Protestant Cemetery where the bodies of prominent figures are buried; and Dom Pedro V Theatre, which was China's first Western-style theatre and remains a venue for stage plays and concerts.

The most popular attraction, however, is Senado Square, which is surrounded by pastel-coloured neoclassical buildings where a shopping plaza is housed. Once a meeting place for the Chinese and Portuguese in the 16th-18th centuries, the triangular-shaped square is now the venue for public events, celebrations and also shopping sprees.

The total population of Macau is around 640,000 and more than 90% of the residents are ethnic Chinese of Buddhist faith. No wonder there are almost 50 Chinese-style temples across the city. But most of them are quite small, looking more like the Chinese shrines we see in Thailand. The A-Ma Temple is Macau's oldest and most famous. It is also listed as a World Heritage Site.

Besides ancient buildings, Macau has more than 20 museums that tell of the aspects of the old city. A recommended one is the Handover Gifts Museum of Macao, which displays the auspicious gifts presented to Macau by China's 56 ethnic groups to mark its reunification. The museum was built on the site of the Macau handover ceremony of the two governments on Dec 20, 1999.

Macau is also renowned for its Macanese cuisine, a fusion of Portuguese and Chinese food that can't be found elsewhere. It also has many famous food shops and restaurants of various cuisines located mostly in the peninsula and Taipa island. Bakeries and coffee shops can also be found serving delicacies everywhere.

In order to get a bigger picture of Macau, however, visiting its gigantic hotel-casinos is recommended. Besides the spacious casino quarters that are filled with countless slots and gaming tables, various forms of lavish entertainment, fine dining and luxury shopping with brand names products from around the world are available there.

Only a few minutes after stepping into one of them, I couldn't help but wonder how long it would take such a billion-dollar establishment to be able to break even. But, considering the fact that Macau's casino market has annually made around US$29-45 billion in the past several years, it's not strange that Macau saw two new casinos opening just a few months ago. And three more mega projects are due to open next year.

It's impossible not to feel impressed with what Macau has to offer. It might be a perfect place for "big time" players. But, for an ordinary visitor like me, getting the chance to stroll around a city rich in the legacy of East meets West during the day before witnessing its modern wealth at night is a one-of-a-kind experience. 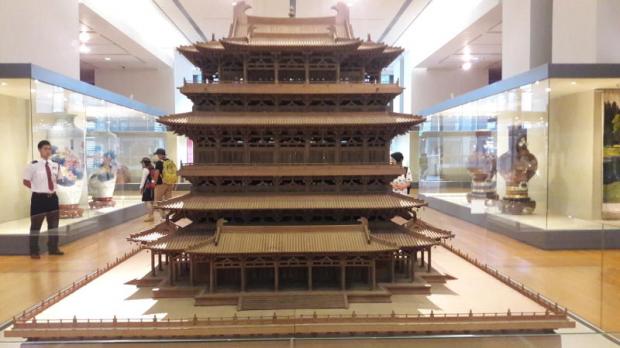 Stork Tower, a woodcarving, is among many other precious pieces on display at the Handover Gifts Museum of Macau. It was given to Macau by the Provincial Government of Shanxi to mark its return to China. Patcharawalai Sanyanusin 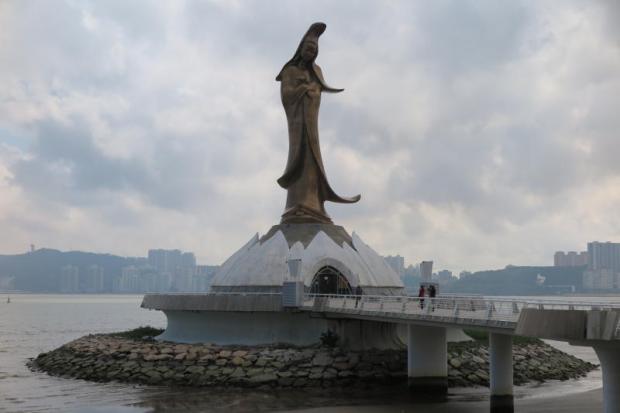 Kun Iam Ecumenical Centre is another landmark. It comprises a 20m-tall bronze statue of the Goddess of Mercy (known among Thais as Guan Yin) and a 7m-high lotus-shaped dome as its base. Located on an artificial island in the outer harbour, the centre presents information on Buddhism, Taoism and Confucianism. Patcharawalai Sanyanusin 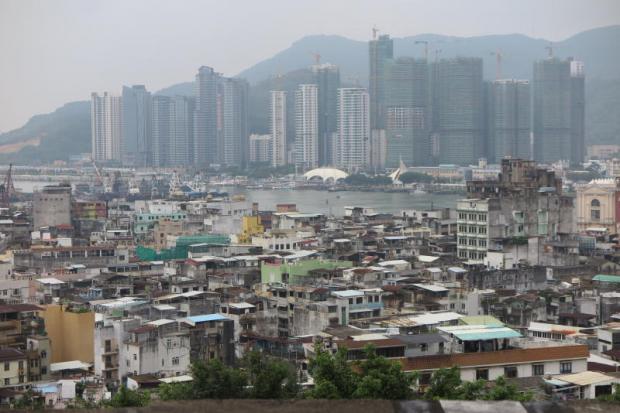 This is one of the dormant cannons that line the battlements of Mount Fortress that had protected Macau for centuries from invaders. The fortress is one of the best places to get a spectacular view of Macau. The Museum of Macau is on the same premises. From the top see the Zhuhai River and Zhuhai city of Guangdong province, China. Patcharawalai Sanyanusin 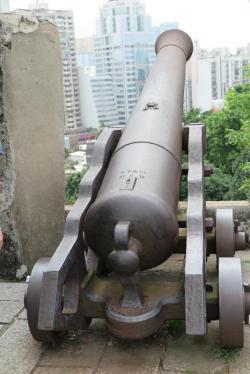 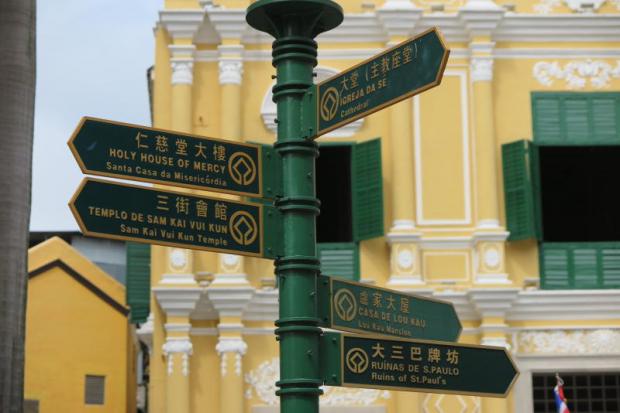 Next to Senado Square, St Dominic's Church was China's first church built by Dominican priests in 1587. The first Portuguese newspaper was published here in 1822. At the back of the church is a small museum called Treasure of Sacred Art, which displays around 300 artefacts. There is no admission fee. A green sign post displays the names of each venue in three languages — Chinese, Portuguese and English. It can be spotted at nearly every corner in the tourist areas. Patcharawalai Sanyanusin 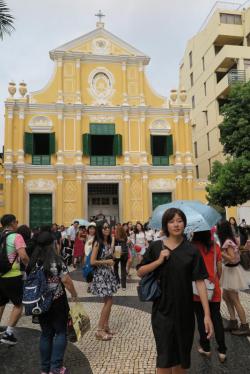 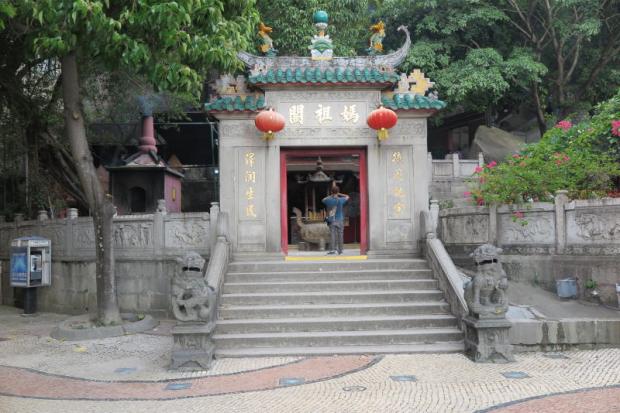 A-Ma Temple was built in the late 15th century in dedication to the goddess of seafarers and fishermen. The world 'Macau' is derived from the Chinese A-Ma-Gau, which means 'Bay of A-Ma'. This automatic stamp vending machine is near the temple. Similar ones can be found in tourist areas. All are equipped with a receptacle for ordinary mail. Patcharawalai Sanyanusin 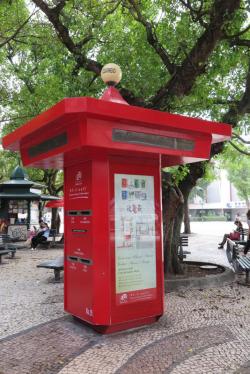 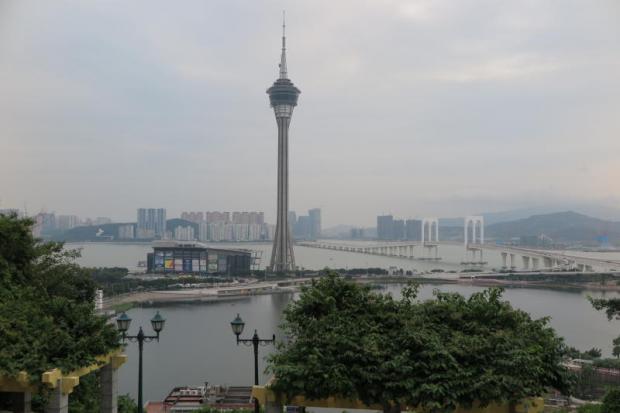 Located on the tip of the peninsula, the 338m-tall Macau Tower offers the best view of Macau, as well as the world's highest commercial sky jump (233m). It also houses a restaurant with panoramic views, theatres and shopping malls. Patcharawalai Sanyanusin 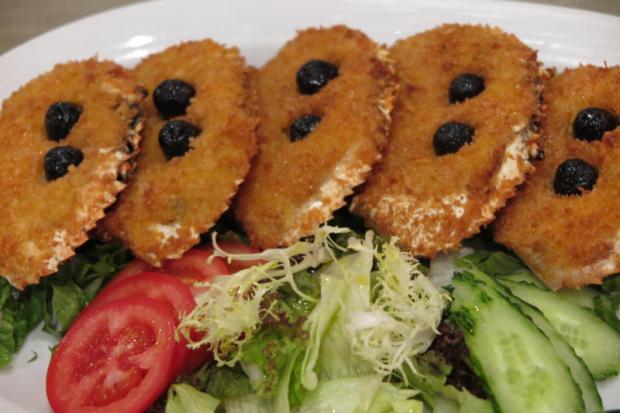 Portuguese fried rice and deep-fried stuffed crab are among the famous dishes of Macanese cuisine, with pastel de nata (egg custard tart) as the most popular dessert. Patcharawalai Sanyanusin 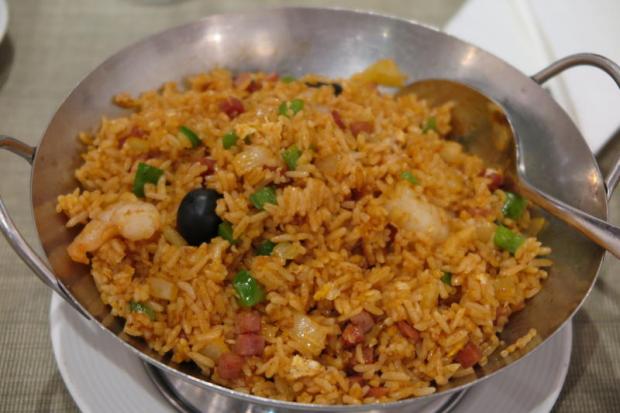 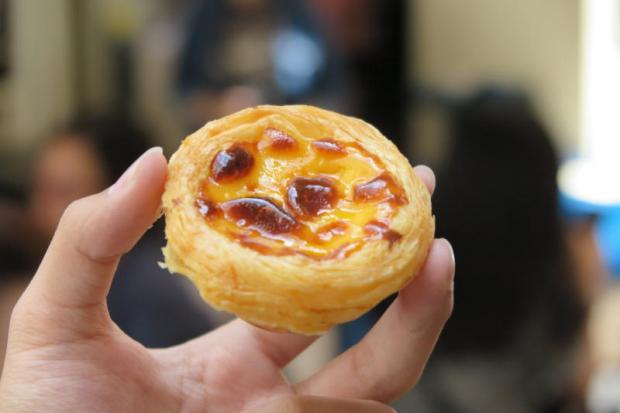