published : 15 Jan 2017 at 04:00
newspaper section: B Magazine
writer: Chaiyot Yongcharoenchai
Tickled pink: Nong Han Lake, or the Pink Water Lilies Lake as it's known, is in Udon Thani province. The flowers are best viewed between 6am and 9am and will bloom until the end of March.

When scrolling through my Facebook feed over the holiday season, I see that most of my friends have left the country for a winter break away from their usual scene of busy Bangkok. Family vacations spent at a Hokkaido ski resort, colourful scenes of Christmas lights and displays in London, sunny escapes to Florida -- these images all flood my newsfeed.

I start to get depressed as I consider my own vacation options. With my limited budget, I can't travel quite as far as many of my friends.

But sitting in front of my computer and complaining wouldn't change my situation.

I begin researching a destination to fit my budget and realise there are plenty of cheap and nearby places I have yet to explore here in my own country.

The only region I haven't explored extensively is the Northeast region, or Isan, known for its ancient sites, natural landscapes and scenes of agrarian life.

So I pack my bag and get the car ready. I hit the wide open road headed northeast.

I set a goal to make my first stop after no more than four hours of driving. I plan to take it easy -- I don't want to return to Bangkok feeling too tired out from the long drives.

I make my first stop in Nakhon Ratchasima, or Korat as it is locally known. When most people think of Korat, images of lush greenery and the upscale resorts of the neighbouring mountainous Khao Yai come to mind. However, I tend to think of the city's fascinating historical parts.

I made Phimai Historical Park my first stop, away from the mountain areas more densely populated with tourists. After 332km and roughly four hours on the road, I pull up to the site.

I have visited Angkor Wat before and recall being blown away by how majestic it was. Similarly, at Phimai, I experienced a sense of awe particular to the experience of being in a powerful historic place with roots in the 11th century.

I whipped out my money for the entrance fee, a relatively small amount compared to most historical parks around the world. But the lady at the ticket booth just gave me a big smile and informed me it was free.

She explained that the park was offering free admission in order to pay respect to King Rama IX. I was only asked to register with my name and telephone number.

From exploring the site, I learned that Phimai served as a blueprint for Angkor Wat, which was built a century after the Korat temple complex.

In the past, a road led directly from Phimai to Angkor Wat, allowing influences to flow easily between the cities.

The site was well preserved and new parts had recently been added to make the building resemble its original state.

I could see many parallels with Angkor Wat, such as the Naka bridge leading into the complex and the lion sculptures guarding the steps.

Phimai itself was modelled after Mount Meru, a sacred mountain in Hindu beliefs.

A few hours passed in the park before it was time to move on. My next destination was Khon Kaen, 153km or roughly a two-hour drive away. This is where I planned to spend the night before heading to my next destination.

I had a layover in Khon Kaen, a city I found to be not terribly different from Bangkok. The downtown area was busy and bustling, while the traffic was really bad.

The main destination seemed to be the shopping mall, situated at the heart of the city.

On that second day, I woke bright and early to check out Bung Kan's Wat Jetiyakhiri, also known as Wat Phu Thok. It was a 268km drive away, taking me at least four hours to get there. I started off on a main road, which eventually split off into smaller rural roads.

Google Maps showed me a helpful shortcut and I ended up sharing the road with several service trucks, allowing me to speed up to my next site.

At the two-hour point, I took a break at a coffee shop to stop me from falling asleep.

An hour and a half later, I hit the road again and begun noticing new elements of my surroundings with fresher eyes.

As I drove along the narrow road, I started to notice signs pointing to the Pink Water Lilies Lake. It was then that I remember it was the season when the bright water lilies went full bloom in Nong Han Lake, located in the Kumphawapi district of Udon Thani.

It was 10.30am by that time, close to when the full sunlight would strike and cause the water lilies to close up at noon.

I arrived at the local pier of Chiang Haeo where both small and big boats are available for rent from 300 to 500 baht.

"You arrived at the perfect time," said Boonsong Hansantia, a 62-year-old boat skipper, as he greeted me.

He offered his tour service at 200 baht since the peak time to see the lilies in the morning had already passed.

I hopped on a small boat and we motored out to the middle of the lake.

"I see this lake all the time," Mr Boonsong explained. "I didn't think it was anything special until the Chiang Haeo district office made it a new tourist destination five years ago.

Following Mr Boonsong's suggestion, I write them a favourable review. It is well deserved -- the lake is incredibly beautiful.

The flowers will continue to bloom until the end of March. The best time to come visit is in the early morning, from 6am to 9am.

I was lucky to see the water lilies fill the lake with their colour until when they closed up at noon.

It was a unique experience, one definitely worth the long drive to go see.

I debated whether I should rest or continue onto Bung Kan, a two-hour drive away. Despite my fatigue, I decided to forge on and check out my next stop, Phu Tok Temple.

As I arrived at the temple, I saw the tall jagged hills made of red rock rise up from the land. A wooden walkway wrapped its way around it, hanging off the sides of the hills.

A sense of peace came over me the moment I stepped onto the temple grounds.

In 1969, a monk arrived at these hills to meditate. He found the perfect spot hidden in a jungly part of Phu Tok, meaning "lonely mountain", where he set up a small tent.

From that time onwards, the temple at the hills' base became increasingly well known among monks seeking a peaceful, remote place to meditate.

As more monks trickled into the area, so too did the locals to bring them food. Some villagers offered to make a simple shelter for the monks to use when it rained.

Over a five-year period, people constructed the stairway in order to allow the monks to go to higher grounds, away from the wild animals around the base.

Built out of people's voluntary efforts, the structure attests to locals' commitment to their Buddhist faith.

The hill is now among the most popular attractions in Bung Kan province.

I was heaving my way up the first to second level of the steps, feeling unfit to go any further.

But just when I thought of surrendering my climb at the third level, an elderly-looking lady came down the steps and gave me a great big smile.

At that point, giving up would have felt a bit embarrassing. So I kept climbing, pausing here and there, before reaching the fifth level.

The view was quite literally breathtaking.

I continued onto the final sixth level, which offered a stunning panoramic view of the city below. From up above, I could understand why monks love meditating here.

I made my way down, which almost seemed harder than going up, having already extolled so much energy.

That night, I headed back to town to rest before the next day's big journey.

After a good night's rest in Udon Thani town, I decided to head back to Korat to visit Jim Thompson Farm, a site that's open to the public for a few weeks every winter. The drive was 310km long and it took me four and a half hours.

Having woken up late to recover from my climb, I got to Korat by 5pm.

I visited a newly opened shopping centre in Korat, modelled after a well-known Bangkok mall. What made it different, though, was the 800-metre-high Sky Deck tower, which is available for free panoramic views of the city. The wait for the tower was long, but it didn't offer much to see in the end.

On the final day of my trip, I woke to what felt like my first winter morning. The temperature fell to 16 degrees C, perfect weather for a walk outdoors. I drove one hour outside the city to see Jim Thompson Farm, located in Pak Chong district.

Despite it being a weekday, the farm was very busy with visitors.

From the front entrance, I could tell that whoever designed the farm intended to make it stand out from other farms in the area. The decor was very tastefully done, bringing out the unique character of Isan culture with an international flair.

Upon arrival, a tram picked us up for our tour. We began in the farm's most iconic site -- a wide open field where flowers and plants, bursting with colour, were in full bloom.

Another stop showed us the local pha kao ma fabric that the farm produces.

Traditional Isan houses around the flower fields feature informative displays on how silkworms are raised and how they contribute to making Jim Thompson's quality silk.

Visitors can easily spend the entire day checking out a variety of activities, including family-friendly ones like the giant pumpkin patch -- an ideal stop for avid amateur photographers.

The tour ends with the staff showing off a variety of Jim Thompson products, such as silk clothing and accessories, fruits, vegetables, deserts, snacks and more high-quality goods from the farm.

In my four-day trip around northeastern Thailand, I got to learn more about the local culture, see beautiful natural landscapes and how they are influenced by faith, as well as spend a relaxing day on a farm inspired by a legendary figure.

I couldn't manage a trip halfway around the world for my holidays.

However, I still managed to snag some beautiful photos to show my Facebook friends that I didn't just sit at home and passively "like" photos of their trips.

Most importantly, I learned that there is still a great deal of Thailand to discover. 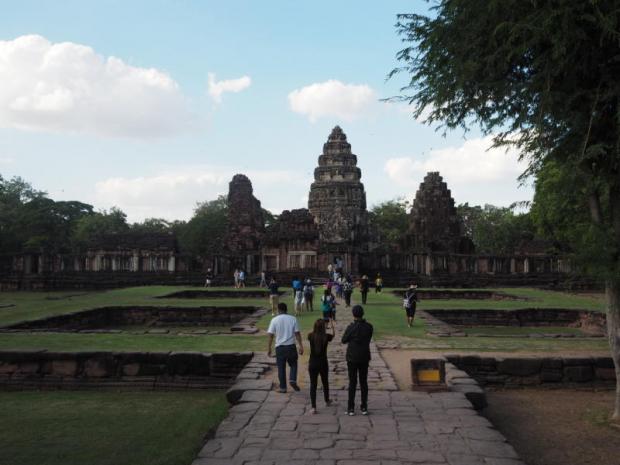 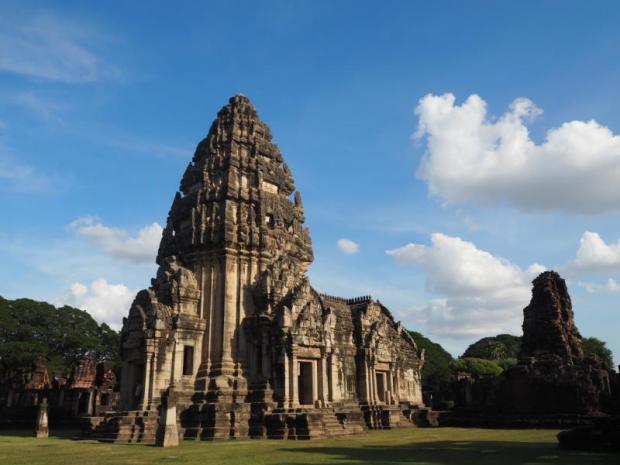 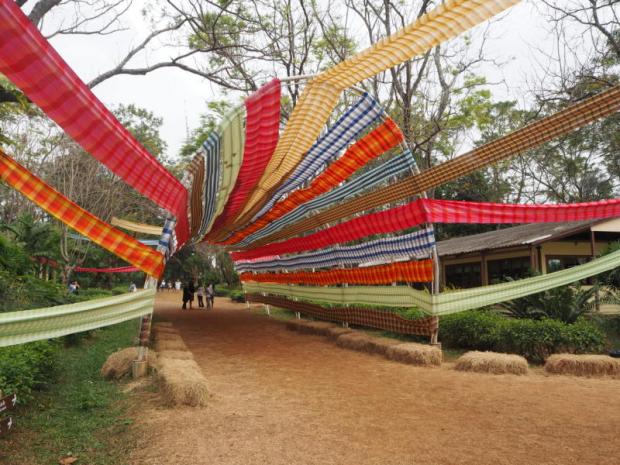 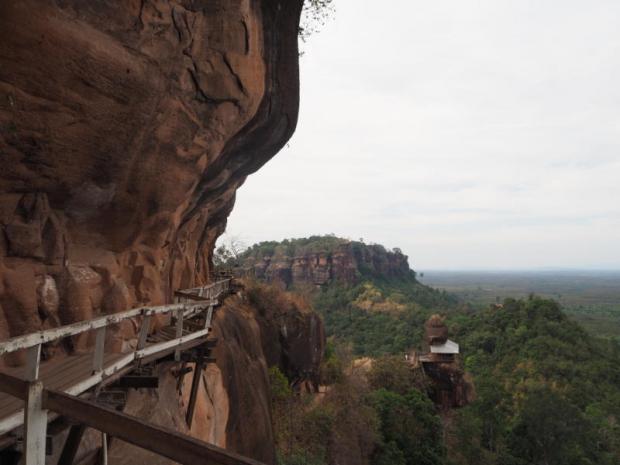 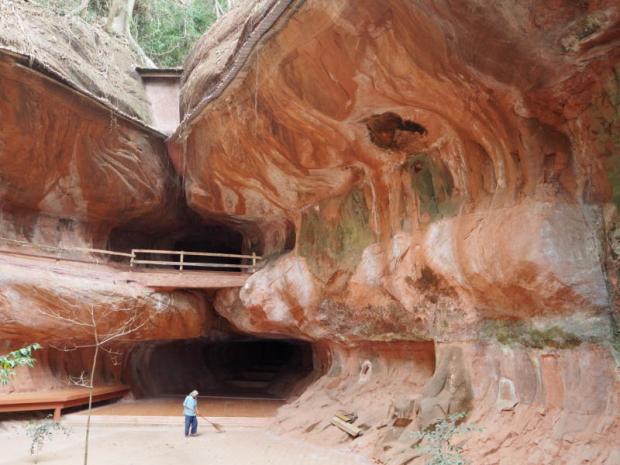 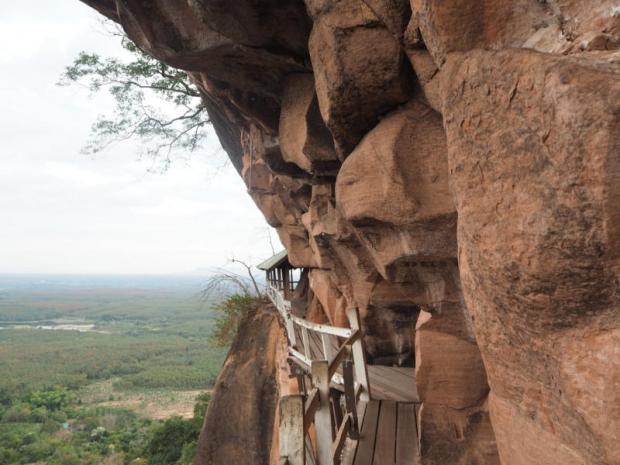 on the edge: A walkway spanning six levels wraps itself around Phu Tok, offering spectacular views. a field day: Jim Thompson Farm, offering informative workshops and photo ops, is open to the public for a few weeks every winter. 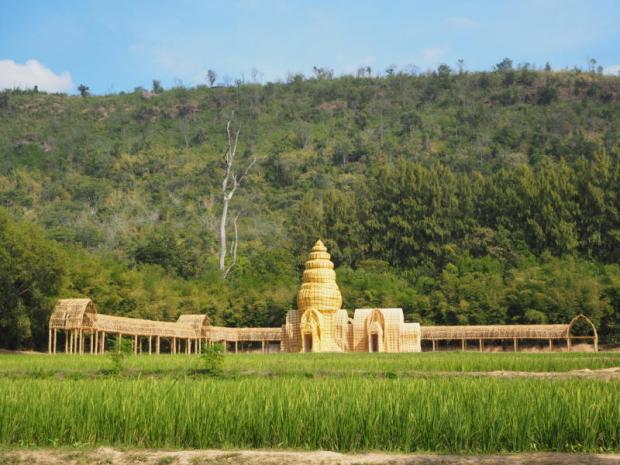