Phetchaburi in the Central Region is a reminder of the old Kingdom of Ayutthaya in terms of art, architecture and culture

published : 2 Mar 2017 at 04:00
newspaper section: Life
writer: Pichaya Svasti
Khao Luang Cave is in Khao Luang Hill that rises 92m from ground level. The cave has beautiful stalactites, stalagmites and several chambers. It houses 170 Buddha statues, many of which were built in the Ayutthaya period and restored by King Rama IV and his children, as well as a large Buddha statue commissioned by King Rama V. The first chamber boasts a model of the Lord Buddha's footprint built by King Rama IV. The second chamber has three small rooms with a reclining Buddha image, a huge Buddha statue called Luang Phor To and a few other Buddha statues. One of the statues is on a base bearing the royal emblems of the first five monarchs of the Chakri Dynasty. Pichaya Svasti

Two-and-a-half centuries have passed since the fall of the Ayutthaya Kingdom. The old palace and numerous temples are in ruins and it is hard for people to imagine what the architecture and religious art was like in the past. Fortunately, Thailand still has a "living Ayutthaya" in Phetchaburi province.

Phetchaburi is an ideal place to explore major cultural attractions, local lifestyles and delicacies in a day or over the course of a few. Many temples date back to the Ayutthaya period and maintain their original art decor. A half-day walking or cycling trip hosted by community tourism groups is highly recommended. An upcoming trip is the "Phetchaburi Dee Jang" (How Nice Phetchaburi Is!) Fair, which will be held on March 18-19.

Visitors can stroll from Wat Maha That, in the heart of town, and Wat Phlabphla Chai to Khlong Krachaeng to see old wooden shophouses, the house of the late author Manas Chanyong, an old community pavilion and a local museum, displaying earthenware and other artefacts retrieved from the Phetchaburi River.

After crossing the river from Suwan Munee Road, they will enter the old market area. This neighbourhood has numerous shops and restaurants, which are in retro style and display antiques and goods ranging from furniture, clocks and toys to kitchenware and food containers from the 50s-90s.

Must-sees include the Tangsawatdirat family house, which is a community learning centre, and old shops selling Chinese rice cakes and student uniforms. At the nearby dessert market, there are stalls selling the town's famous food -- khao chae (rice in fragrant iced water eaten with sweetened fish, pork and radish and other dishes). At the foot of the iconic Phra Chomklao Bridge is an empty space for organising activities, such as photo exhibitions, and some old houses dating to the reign of King Rama V. 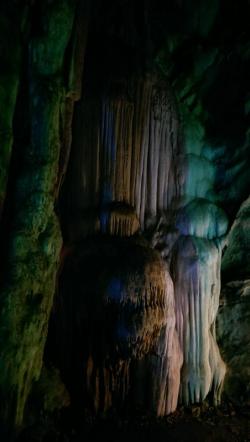 Khao Luang Cave is in Khao Luang Hill that rises 92m from ground level. The cave has beautiful stalactites, stalagmites and several chambers. It houses 170 Buddha statues, many of which were built in the Ayutthaya period and restored by King Rama IV and his children, as well as a large Buddha statue commissioned by King Rama V. The first chamber boasts a model of the Lord Buddha's footprint built by King Rama IV. The second chamber has three small rooms with a reclining Buddha image, a huge Buddha statue called Luang Phor To and a few other Buddha statues. One of the statues is on a base bearing the royal emblems of the first five monarchs of the Chakri Dynasty. Pichaya Svasti

Visiting temples and cultural attractions in Phetchaburi is a good way to appreciate several forms of local art, which are presented through religious art. If visitors want to see a natural attraction which boasts Ayutthaya- and Rattanakosin-style arts, they can visit Khao Luang Cave, about 5km from the town centre.

If they want to enjoy nature and Rattanakosin art, they can visit Phra Nakhon Khiri, or Khao Wang, the summer palace of King Rama IV on a hill full of trees and monkeys. If they want to learn more about local history through old photos and documents, they should visit Phetchaburi Museum, a private museum.

Human settlement in Phetchaburi dates back to the prehistoric era, according to archaeological evidence unearthed on mountains in Ban Nong Fab, west of Tha Yang district. Although no traces of Dvaravati-style communities have been found in the Phetchaburi River basin, many historic sites and artefacts dating to the Dvaravati Period (6th-11th centuries), including Buddha statues and sculptures of the Wheel of Dhamma, were found scattered in the area.

In Ban Lat district, traces of buildings and stone statues were recovered at Ban Nong Phra in Ban Lat district and pieces of earthenware, moulds of Buddha statues and glass beads in Noen Pho Yai. Traces of human settlement and historic sites were found near Khao Krajiew of Tha Yang district, while ruins of a large religious building were uncovered in Thung Setthi, Cha-am district.

There is no clear evidence to confirm the year of the establishment of Phetchaburi. However, the base of Wat Maha That main stupa is made of large bricks in the Dvaravati art style. The long corncob top of the pagoda is in the Ayutthaya style. This temple also has a large red sandstone Buddha statue in the pre-Ayutthaya U Thong art form. Given such evidence, Phetchaburi must have been founded before the Ayutthaya period -- possibly when Buddhism spread from Ceylon via the southern city of Nakhon Si Thammarat.

Apart from learning about local history through art, visitors should taste the town's famous khao chae and local desserts, especially khanom mor kaeng (Thai-style custard). Beachgoers will love the sandy Chao Samran, Puek Tian and Cha-am beaches. In all, Phetchaburi has almost everything from art and culture to nature and delicious food to offer visitors. 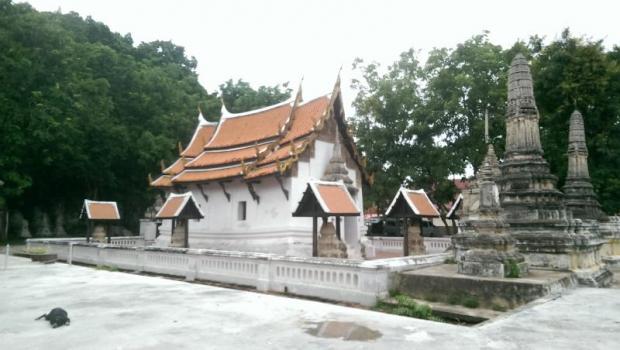 Wat Sa Bua is 500m from Khao Wang, the summer palace of King Rama IV.Its structures reflect the Ayutthaya art style. Its ordination hall has a beautiful base in a lotus shape and sports a fine roof decorated with wood carvings, gold lacquer and coloured mirror glass. The front and rear gables are each adorned with stucco art depicting the Hindu god Vishnu riding a giant with different details. A highlight is the red sandstone sema stones around the ordination hall. Each piece is unique. The gates and walls around the ordination hall date back to the late Ayutthaya period. The gates sport several tiers set into 12 recesses and are decorated with stucco lotus petals and stucco motifs called klib khanoon. Pichaya Svasti 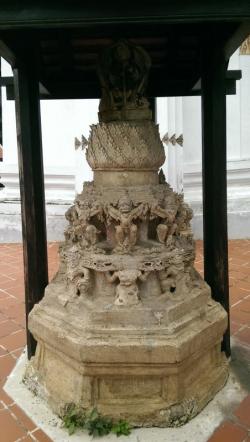 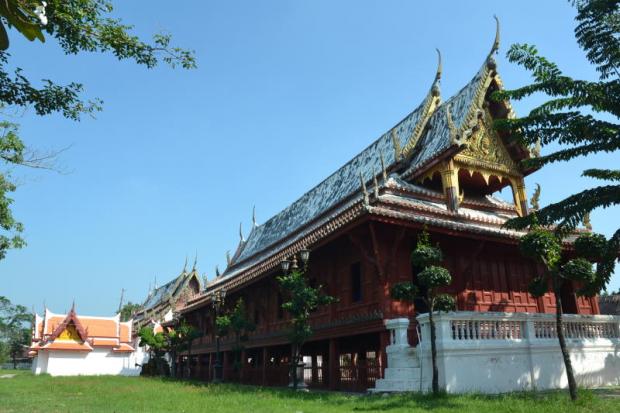 Wat Yai Suwannaram was built during the late Ayutthaya period and restored in the reign of Phra Chao Sua of the Ayutthaya Kingdom, who also had his royal mansion moved from Ayutthaya and rebuilt as the temple's salakan parian (multi-purpose building). This teak wooden building is beautifully decorated with fine wood carvings and octagonal pillars with different gilded black lacquer motifs. It has one of the country's finest praying chairs. Its front doors are made of finely carved wood with foliage motifs and gold leaf. The ordination hall sports beautiful murals that date back to the 16th century. They portray golden phoom khaobin (flower offerings), the devil and the efforts of his troops to conquer the Lord Buddha and the gathering of angels. Wat Yai Suwannaram is also home to Somsong Boonwan's lakhon chatri theatre troupe. Pichaya Svasti 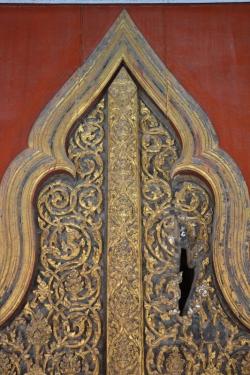 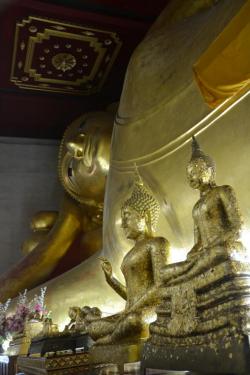 Wat Phra Buddha Saiyart or Wat Phra Non, is in Khlong Krachaeng, at the foot of Khao Wang Hill. It was established during the Ayutthaya period. The 43m-long reclining Buddha was originally built outdoors and later covered with a roof built by King Rama IV. A prayer hall was built by King Rama V. This Buddha statue places its head on three round pillows and has feet adorned with red auspicious motifs on the gold-coloured backdrop. Other must-sees are the pavilion with a huge painting of the standing Lord Buddha called Phra Buddha Chai, the pavilion for a crowned Buddha statue, and hor trai (Buddhist scripture library) in the Ayutthaya style. This library was restored by the Fine Arts Department last year and is back to its past glory. Pichaya Svasti 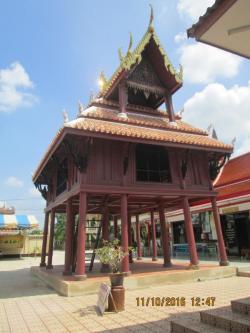 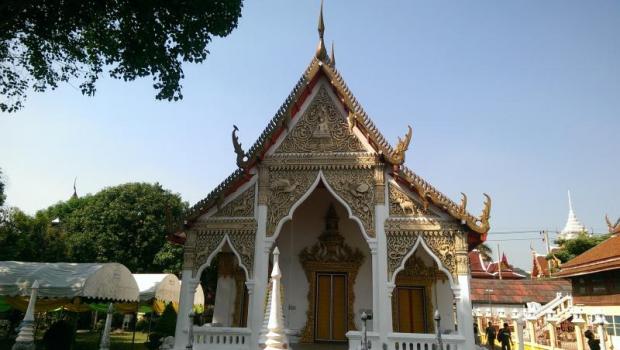 On Damnoen Kasem Road, Wat Phlabphla Chai was established in 1747. It stands out for its fine art stucco on the ordination and prayer halls' window and door frames, as well as Phetchaburi-style wood carvings on the ordination hall's doors. The principal Buddha statue of the ordination hall is in the Sukhothai art style. It also has a nang yai shadow puppet museum and the statue of famed poet Sunthorn Phu, who visited Phetchaburi and penned the travelogue Niras Muang Phet during the early Rattanakosin period. Pichaya Svasti 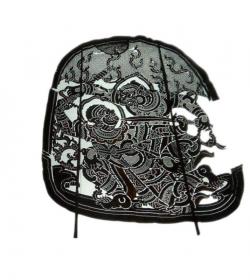 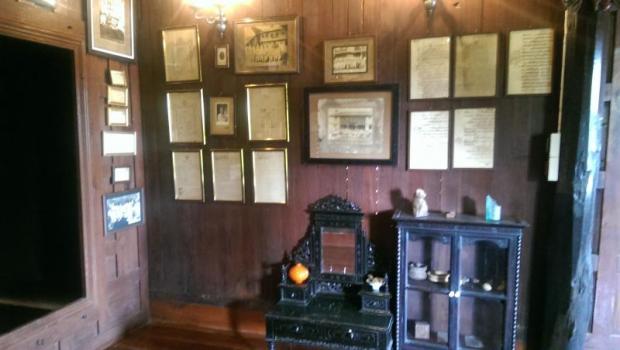 Phetchaburi Museum is a private museum displaying old photos and documents. It tries to promote public understanding that Phetchaburi should be called Phetburi according to its original names Phribphri and later Phetburi. It also informs people that early inhabitants were Brahmin, based on the fact that there was a giant swing and Brahmin shrine at Wat Phribphri, and several Brahmin beliefs and rituals have been passed on in this town for centuries, including the use of holy water from a stretch of the Phetchaburi River in front of a temple in an old Brahmin community. Pichaya Svasti 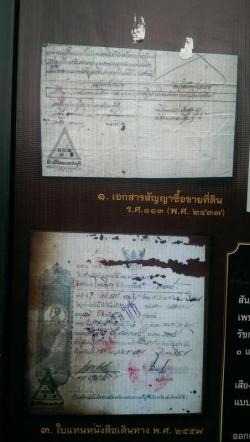 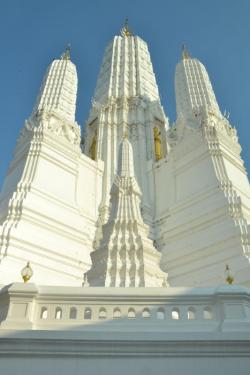 Wat Maha That Worawihan is a royal temple. Its ordination hall was built in the reign of King Borommakot in the late Ayutthaya period. The crowned principal Buddha statue is enshrined among several Buddha images according to the Ayutthaya style, including Luang Phor Wat Mahathat — a Buddha image in the Phetchaburi art style. Luang Phor Wat Maha That is in the subdued Mara posture carrying a praying fan in its left hand. The hall has fine murals and a gable decorated with stucco art showing the Hindu god Vishnu riding the Garuda — genuine Phetchaburi art. The corncob stupa of the temple in the Ayutthaya style enshrines the Lord Buddha's relics and is surrounded by pavilions, which house 193 Buddha images. Pichaya Svasti 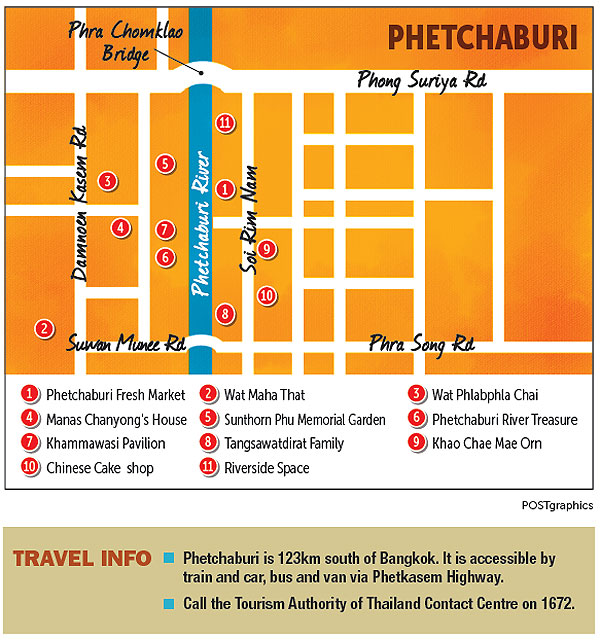