When a tourist bus from Nakhon Pathom reaches the gates of Ban Phu Homestay in Mukdahan's Nong Sung district, villagers are lined up. Many of them grandmothers, dressed in ethnic Phu Thai costumes, they wai each visitor and greet them with a "Sawadee".

"Their homestay service is famous so 50 of us wanted to see their facilities and learn how they manage their resources," said a member of the tourist group.

Phu Thai is an ethnic group, which has its own culture and dialect, according to Thawan Phiwkham, chairman of Ban Phu Homestay, whose gates have the words "Chalerm Rat Cultural Centre Of Ban Phu" emblazoned across them.

Their ancestors migrated from Kham Or Khiao and Wang towns on the east side of the Mekong River in Laos to Nong Sung in 1844, during the reign of King Rama III (1824-1851).

During the cholera epidemic in 1899, about 20 families moved further south and crossed a mountain. They settled in present Ban Phu, which is situated on a hill surrounded by lush, green mountains.

The village has gradually expanded. Today there are 250 families or about 1,200 people living in the community. Most of them are rice farmers. Each family has about 7 rai on average, said Thawan. While men work in the rice fields, women weave clothes for personal use.

The community offered their hand-woven silk clothes to His Majesty the late King Bhumibol Adulyadej and Her Majesty Queen Sirikit when 150 of them visited Chitralada Palace in 1974. They toured the palace and experienced farming projects initiated by the late king.

"We learnt about the self-sufficiency economy. We also applied the philosophy to our way of life," Thawan said. Every family now grows herbs, vegetables and fruit around their homes.

"When I saw my neighbours working on a small vegetable plot in front of their houses, I felt ashamed that I didn't plant anything," said Tom Sama-aphat, 66, who started planting vegetables 30 years ago.

"I planted vegetables that my family like such as shallots, cabbage, Chinese cabbage and kale. Since then we haven't bought any vegetables. We also share and exchange produce with neighbours," she added. The villagers grow vegetables organically. They grow rice for their own consumption so they also avoid chemical pesticides.

When I toured the village with a research team from Suan Dusit University and representatives from the Thailand Research Fund, I saw a villager picking a few green pods from a pigeon pea hedge along the road.

She encouraged me to taste the green beans, which were sweet, and said: "It's a good snack."

Apart from growing vegetables, villagers raise pigs, oxen, fish and chickens. They also grow cassava, rubber trees, fruit trees and cotton for producing yarn. Most of the raised houses in the village have a wooden loom under them.

"It's our traditional belief that every woman must be able to weave clothes, otherwise we wouldn't have a chance to get married," said a granny, 68, adding that she learned weaving when she was 12.

Today the woven clothes of Ban Phu are dyed naturally or using chemicals, with an option of being soaked in fermented mud to soften the textiles. Visitors also get a chance to dye yarn and learn how to weave. The fun part for me was to try on the Phu Tha traditional dress. It reminded me of the time I visited a village in Seoul where visitors can try on the hanbok.

Women wear a dark red phasin (sarong), a long-sleeved, front buttoned blouse in indigo or black colours. A silver belt is used to emphasise the design. A light red woven sabai or a rectangular shawl is worn over the left shoulder. Long hair is usually tied into a bun and decorated with foot-long lines of white yarn flowers.

Men wear a checked sarong in red and green, with a short- or long-sleeved cotton shirt with front buttons. Shirt colours are either indigo or black. A red rectangular woven cloth is tied around their waist. Some of them also wrap their heads with another red woven scarf.

Visitors can play dress-up not only for photographs, but also to join in the traditional parade called hae klong tum (slow dance with a drum).

"We normally organise hae klong tum for merit-making ceremonies, such as the traditional pha pa ceremony [to offer donations and saffron robes to monks]. Since the parade is colourful, we organise it as a reception to entertain visitors," said Thawan.

The parade is joined by villagers of all ages, who dance to the beat of a drum, accompanied by a gong and khaen (Isan mouth organ). It is held in the village's "lan watthanatham" (cultural space).

Yellow mats are placed on the ground and as evening approaches visitors are treated to a traditional khan thok style dinner. A highlight of the dinner is chaeo som, a dip made of fermented fish pounded with galangal, lemongrass, shallots, garlic and dried chillies. It is served with deep fried fish, Thai omelette and boiled cabbage, sponge gourd (buab hom) and amaranth greens (pak khom Thai).

Since the community opened its homestay in 2006, it has received countless awards and certifications, including a Model Community Certification under the Phaen Din Tham Phaen Din Thong (Land of Dhamma and Prosperity) scheme, the Moo Ban Yu Yen Pen Suk (Happy Village) Award in 2006, Outstanding Homestay of Thailand Tourism Awards in 2007 and the Outstanding Model of Self-Sufficient Village of Mukdahan Award in 2009.

"We are very proud that the simple way of life that we started by following the late king's self-sufficiency economy has lead us this far. We will keep on doing what we do best and add more activities such as opening a cultural walking street on Saturdays in the future," said Thawan. 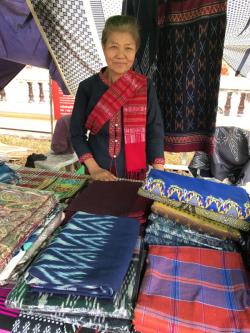 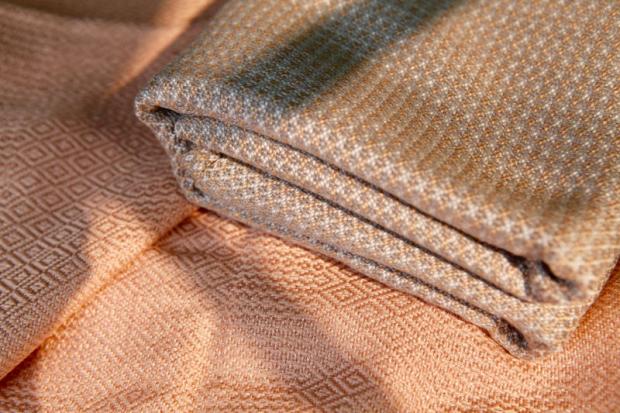 Villagers line up to greet visitors as they arrive. Karnjana Karnjanatawe Villagers demonstrate how cotton yarn is dyed naturally. After dying, the yarn is soaked in fermented mud. The longer it remains in the mud, the softer it gets. The process also helps strengthen the yarn. Karnjana Karnjanatawe 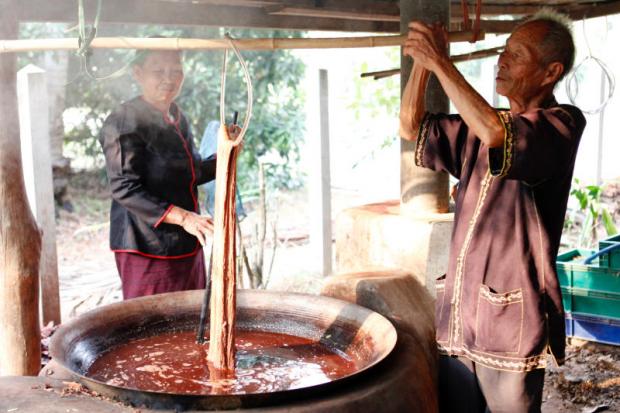 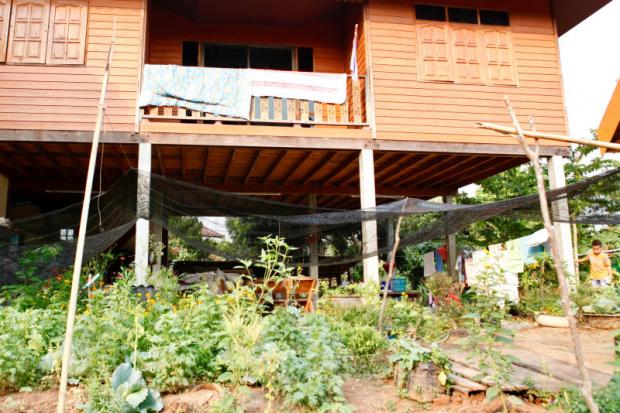 Every family has a small vegetable plot in front of the house. Neighbours are always exchanging produce. Sharing cooked food is also a common practice in the community. Karnjana Karnjanatawe 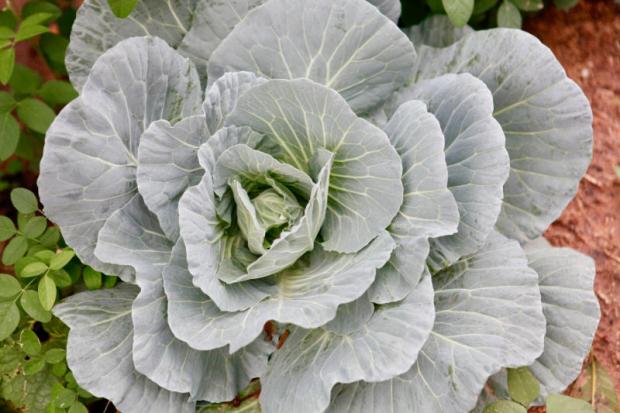 Elderly men lead the bai si su kwan (a traditional blessing ceremony) to ask for their safe journey back home. After praying, the old people tie white yarns around the wrist of each visitor, a warm welcome sign. I was told to put my left hand next to my ear, as a listening gesture, while a man tied yarn on my right wrist and blessed me. He also gave me a boiled egg and wished me good health. However, I felt I should have been wishing him good health. Karnjana Karnjanatawe 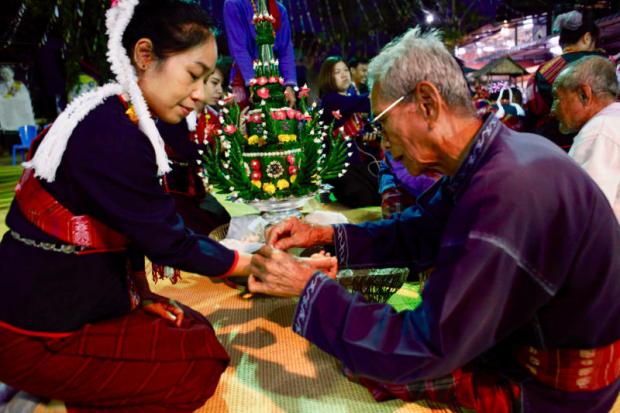 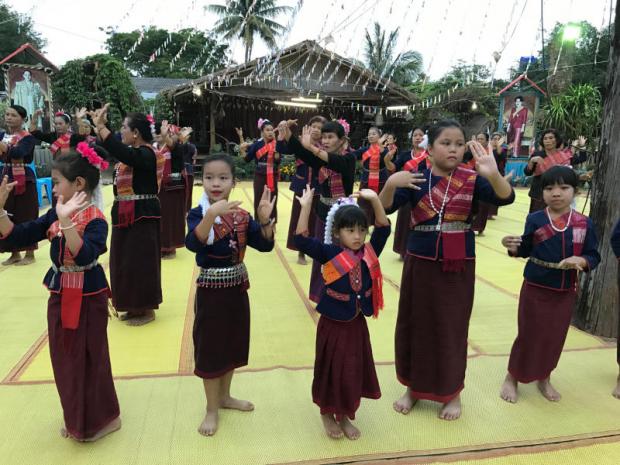 Students participate in a dance performance while Isan music is played by the local village band. They perform the traditional slow phu Thai dance, but also baslop, which is a popular group dance from Laos. The performance ends with a demonstration of the process of producing cotton yarn. Karnjana Karnjanatawe 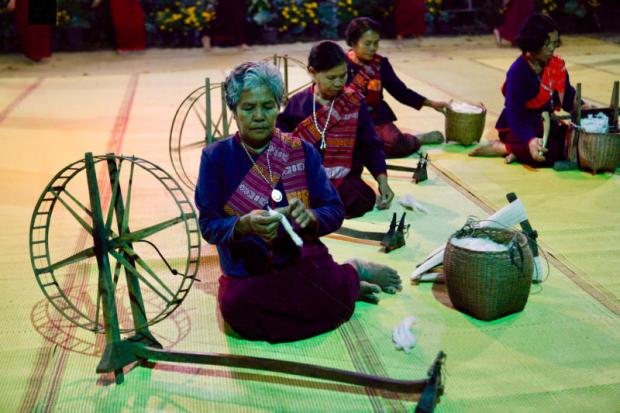 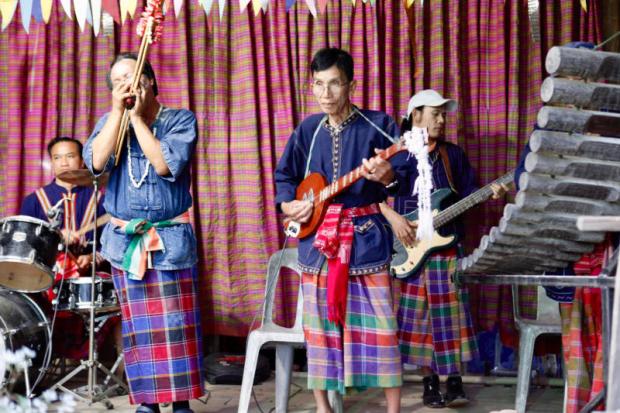 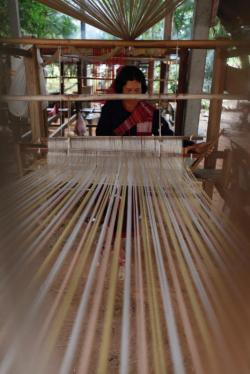 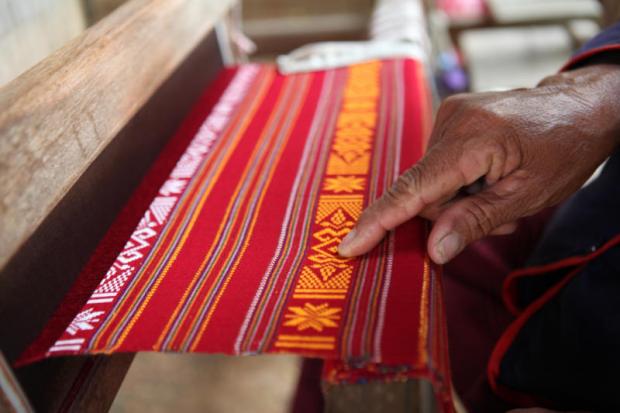 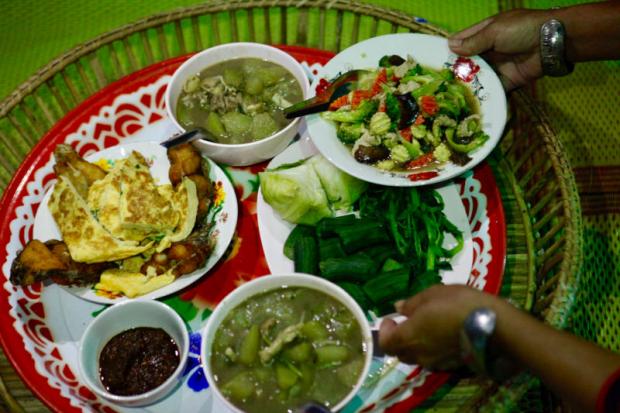