published : 23 Mar 2017 at 04:00
newspaper section: Life
writer: Pichaya Svasti
This steam locomotive attracted a lot of attention when it was parked at Hua Lamphong Railway Station. Hua Lamphong was built between 1910-1916. Designed by Italian architect Mario Tamagno, the Italian Renaissance building resembles Frankfurt Railway Station in Germany. It is made with German construction material. Its staircases and pillars are adorned with beautiful motifs. The hallway of the SRT's Passenger Division is made of marble while the ceiling is made of carved teak — a rare art style. There are stained glass windows on the front and rear parts of the building, as well as a clock in front of the dome. Thiti Wannamontha

Sometimes, people wish they could turn back the clock to the "good old days". Thus visiting ancient places and collecting antiques is trendy, especially in Thailand. 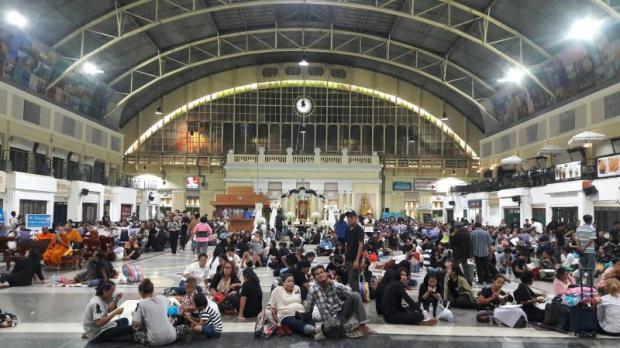 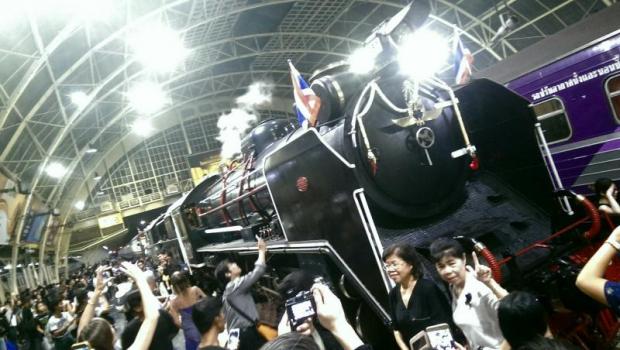 To cash in on this trend, the State Railway of Thailand (SRT) operates one of its century-old steam locomotives from Bangkok to Ayutthaya, the ancient capital. Although destinations may change to Nakhon Pathom or Chachoengsao occasionally, Ayutthaya remains the most popular.

Ayutthaya was established in 1350 by King U Thong as his capital. The city lasted for 417 years and was ruled by five dynasties and 34 kings. It was lost to Burmese invaders twice. The last invasion was in 1767. Today, the province is a Unesco World Heritage site and one of Thailand's most popular cultural tourism spots.

To explore Ayutthaya on a steam train, travellers have two choices -- buy train tickets to get to and travel in Ayutthaya or buy a full-board tour to visit a few temples and a market.

Destinations vary according to different themes, such as places built in memory of a few monarchs or scenes of famous novels and TV series. Previous trips have visited Wat Maha That, Ayutthaya Historical Park, Bang Pa-In Palace and Wat Niwet Thammaprawat.

The upcoming trip to mark the anniversary of the SRT on Sunday includes a boat ride on the Chao Phraya and Pa Sak rivers and a visit to Wat Kasattrathirat and Wat Tha Karong. Even Bang Pa-In railway station, where tourists board the steam train back to Bangkok, is art itself and worth appreciation.

Tourists first visited Wat Phutthaisawan, where Ubon (a leading character in Phit Sawat) performs a dance to celebrate victory at war. According to the Third Regional Office of Fine Arts, Ayutthaya, a royal chronicle states that the temple was built by King U Thong in 1353 in Wiang Lek. It was in memory of the area he had resided in before crossing the Chao Phraya River to establish a palace in Nong Sano in 1350.

The next destination was Wat Kudee Dao, where Ubon was killed by her husband Phra Akk, to ensure her spirit would safeguard the Kingdom's hidden treasures. Another stopover is Kong Khong Market in Bang Pa-In where visitors can experience a retro atmosphere and can shop for local handicrafts and delicacies.

King Chulalongkorn Memorial Day is when the SRT hosts a steam train tour because King Chulalongkorn, or King Rama V, introduced modern transportation to Siam. During his reign, the first railroad was constructed from Bangkok to Ayutthaya. He presided over the opening of the Siam Railway on March 26, 1869. In 1893, a rail route from Bangkok to Pak Nam (Samut Prakan) was opened and this helped support troops when Siam was in conflict with France.

A steam train journey is not only an opportunity for people to see century-old locomotives but also inspires them to learn about Thai history and seek to conserve an old travel tradition and beautiful railway stations. 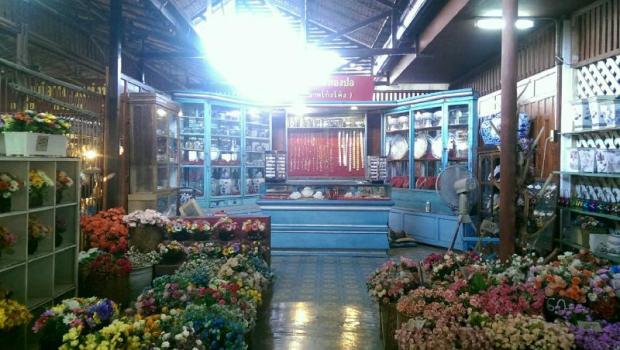 Kong Khong Market is in Ban Saengsom in Bang Pa-In district's Khanon Luang. The words 'kong khong' are derived from the posture of shoppers bending to browse and choose goods sold by vendors who sat on the ground. This market has been brought back to life and is full of vendors wearing traditional Thai attire. It is popular for Ayutthaya's dried fish, spices, fruits, baskets, pottery, wooden handicrafts and rare sappanwood (mai fang) and a variety of delicious food. Visitors can choose between eating at tables or on the floor in traditional Thai style. The market is open on Thursdays, Fridays, Saturdays and Sundays and public holidays from 9am-4pm. Call 035-728-286. 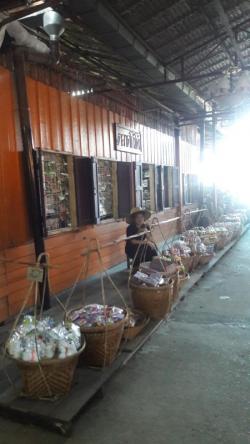 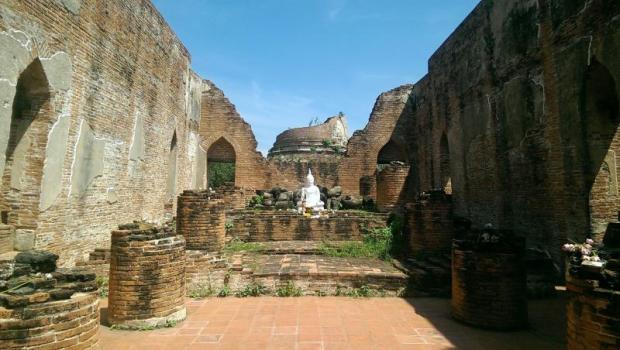 Wat Kudee Dao is a deserted temple in Soi Wat Kudee Dao, east of Wat Maheyong. There is no written evidence to date its establishment, but the Krung Sri Ayutthaya Royal Chronicle says the temple was restored in 1711 during the reign of King Thai Sa by King Borommakot, who was the viceroy. Archaeological excavations found that a few temple buildings were built there in the early Ayutthaya period, such as the way the main pagoda was modified and the way the ordination hall was built on the base of an old structure. The hall is believed to be constructed at the same time as the prayer hall and small stupas by King Borommakot. Adjacent to the temple's northern fence is a two-storey building called Kammalian Mansion believed to have served as the residence of King Borommakot when he was in charge of the temple restoration. 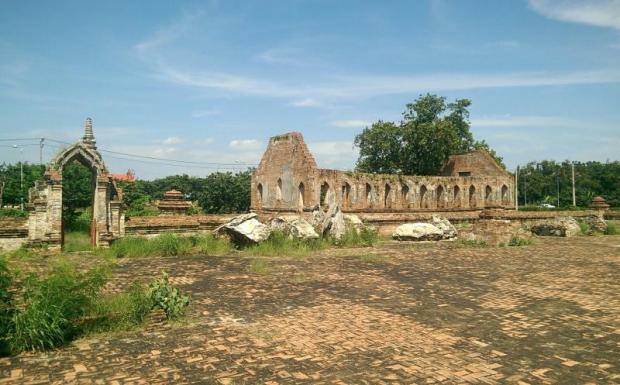 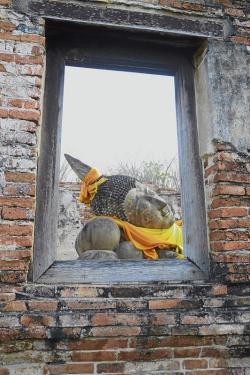 Situated south of Ayutthaya city island and beside the Chao Phraya River, Wat Phutthaisawan resembles temples found on the east coast of India. Some stupas are much like those in Sanchi in Central India. The corncob-shaped dome has a square shoulder and straight vertical sides. The temple was restored many times. It has a corncob-shaped stupa enclosed by cloisters. The front part of the stupa once enshrined a metal statue of King U Thong, which was later moved to Bangkok in 1784 under the royal command of King Rama I and modified into a silver Buddha statue. It has since been kept in Phra Thepbhidorn Hall in the Grand Palace. Behind the surrounding pavilion where the corncob-shaped stupa stands are the ruins of a building housing a reclining Buddha. 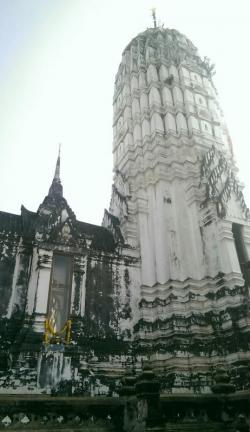 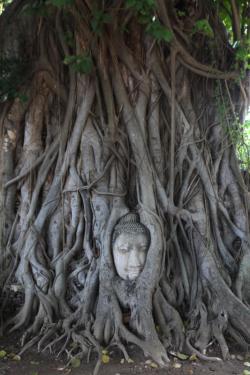 Wat Maha That is in Pratu Chai. It was a royal temple and home of the Supreme Patriarch during the Ayutthaya period. The Royal Chronicle, penned by Luang Prasert Aksornniti, says the construction of the temple's main corncob-shaped stupa enshrining the Lord Buddha's relics began in 1374 during the reign of King Khun Luang Pha-ngua, but was not completed until the reign of King Ramesuan. Later in the times of King Songtham, parts of the stupa collapsed from the top to the level decorated with statues of Garuda. Adorned with four small stupas on its corners and a pavilion called Vihara Khot, the stupa was restored during the reign of King Prasat Thong. The main prayer hall was in the east and the ordination hall in the west. When Ayutthaya fell in 1767, the entire temple was damaged in a fire and was deserted. The stupa collapsed once again during the reign of King Rama VI. The archaeological excavation in 1956 found traces that the prayer hall had been built and modified three times. Photo: Thiti Wannamontha 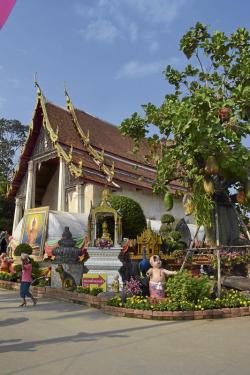 Wat Tha Karong is by the Chao Phraya River on a plot of land where 'Khanon Nua', the old capital's tariff collection office, stood during the Ayutthaya period. It was built before 1533 and became the location where Burmese invaders installed their cannons. Its presiding ancient Buddha image, Phra Buddha Rattana Mongkol, or Luang Phor Yim, is highly revered and is believed to fulfil wishes. Its floating market is lively with vendors selling food, handicrafts and other goods from their paddle boats. The market opens daily from 8am-6pm. Visitors can feed the fish in the river in front of the temple. 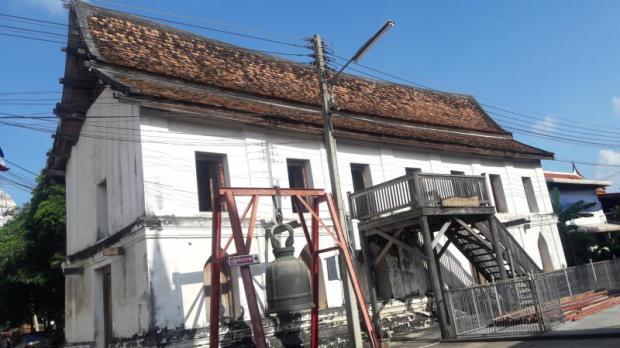 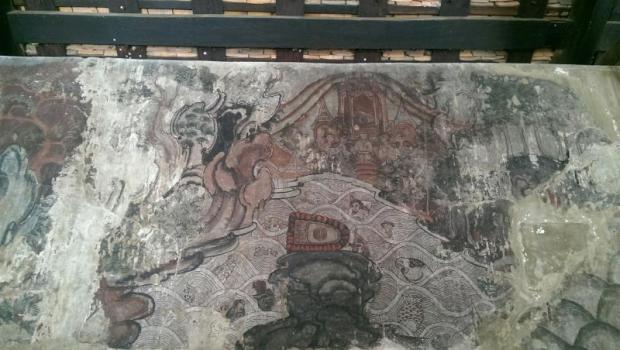 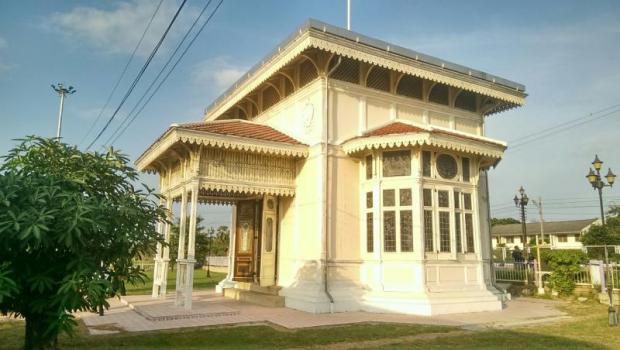 Located beside Bang Pa-In Railway Station, Phlabphla is an open wooden pavilion decorated with fretwork and stained glass in the Victorian style. It was built by the order of King Chulalongkorn as his waiting room during his train trips to Bang Pa-In Palace. The king officially opened the Phlabphla at Bang Pa-In Station on March 26, 1869 — the same day as the Siam Railway. This pavilion has served several members of the royal family, including King Rama V, His Majesty the late King Bhumibol Adulyadej, HM Queen Sirikit and their children during their train trips. The building has been well conserved and won the Association of Siamese Architects' Conservation Award in 1997. 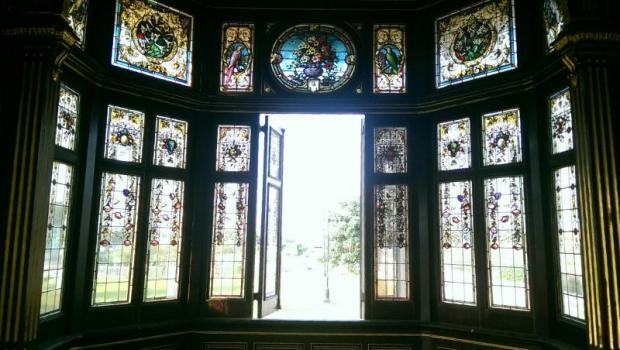 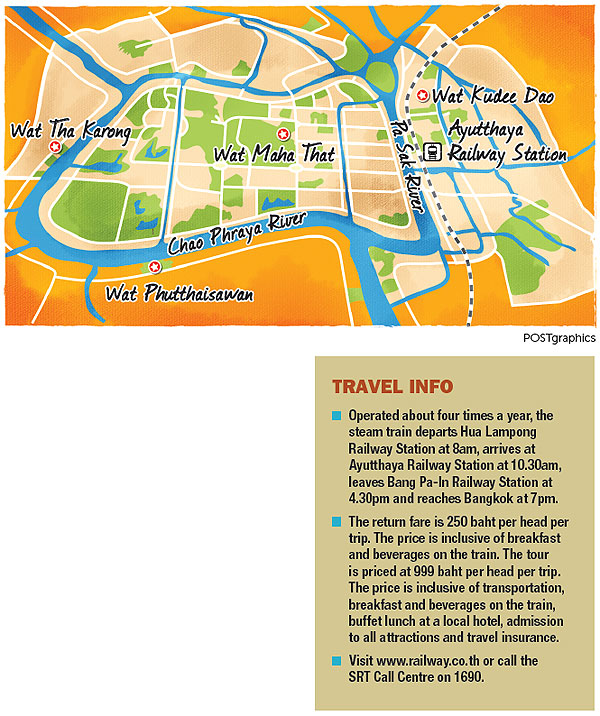