PRACHUAP KHIRI KHAN - A floating garbage island has been found in the Gulf of Thailand off Bang Saphan Noi district.

Snorkellers off Koh Talu in the district on Sunday reported the floating trash moving towards the island to Siam Marine Rehabilitation Foundation.

The garbage includes plastic bags, bottles and foam boxes, which is about one kilometre long. 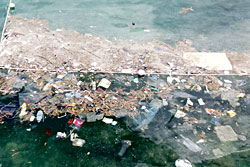 Foundation secretary-general Phaopipat Charoenpak said on Sunday that the garbage could damage shallow water reefs around the island and pollute the island if it washes up its beaches.

The latest floating garbage is the second trash slick found in the province after the previous one was detected in February. Authorities said the trash two months ago could be debris flowing into the sea from the heavy floods in southern provinces. It took about 10 days to move it from the sea.

The foundation has alerted the Marine and Coastal Resources Department, which sent speed boats to locate the trash and it is being collected.