published : 13 Apr 2017 at 04:00
newspaper section: Life
writer: Pichaya Svasti
Chantharakasem National Museum stands where the Front Palace of Ayutthaya Kingdom was and where King Naresuan the Great resided when he was a viceroy. The old palace was restored by King Rama IV of the Chakri Dynasty for his stay during royal visits to Ayutthaya. This museum was established in 1902 by Luang Anurak Phubet who later became Phraya Boran Ratchathanin. The founder had gathered ancient artefacts from around Monthon Ayutthaya and kept them at this former palace for conservation in line with King Rama V's wish to establish museums for the public. The king visited this museum in 1904. Must-sees include the residence of King Rama IV as well as numerous Buddha statues and religious objects. Call the Chantharakasem National Museum on 035-241-587 or 035-252-795. Pichaya Svasti

Tucked away between two rivers and only 76km north of Bangkok, Ayutthaya remains a popular destination for Thai and foreign tourists to learn about the history, art and culture of Thailand. Nonetheless, frequent visitors may want a new theme to explore Ayutthaya. The best yet lesser-known icon is the late Phraya Boran Ratchathanin, a pioneer of the conservation of Ayutthaya. 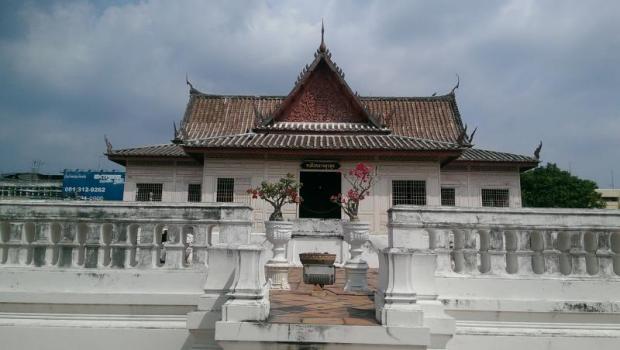 To celebrate the 666th anniversary of the Ayutthaya Kingdom and the 25th anniversary of Ayutthaya as a Unesco World Heritage Site this year, numerous activities under the theme "Development In Accordance With The Footsteps Of Phraya Boran Ratchathanin" were recently held by the Fine Arts Department and public and private agencies in Ayutthaya. Among them was a trip to the Royal Palace, Wat Phra Si Sanphet, Wat Phukhao Thong, Wat Tawet, Wat Thanon Jeen, Khlong Thor Canal and Chantharakasem National Museum -- Thailand's first provincial museum.

Phraya Boran Ratchathanin (Phon Tejagupta), or Chao Khun Krung, was the superintendent commissioner of Ayutthaya Region from 1903-1929 during the reigns of kings Rama V-VII. He surveyed Ayutthaya thoroughly. His studies and work provided significant evidence for history, geography and archaeology of Ayutthaya and neighbouring areas. He wrote several books about the history and archaeology of Ayutthaya and also founded Boran Phiphitthaphan, which was later renamed Chantharakasem National Museum. He also created the first hand-drawn map of Ayutthaya City by the Siamese. "The year 2021 marks the 150th anniversary of Phraya Boran Ratchathanin's birth. We consider nominating his name as a Unesco key world figure due to his great contribution to our country. He protected and conserved Ayutthaya under the royal commands of King Rama V. He created the map of Ayutthaya which has long been in use until present. He surveyed Ayutthaya's old palaces, more than 500 temples and over 600 canals and bridges. He gathered many artefacts and contributed a great deal to the Fine Arts Department's work. He established the first museum outside Bangkok and carried out important administrative tasks," Anandha Chuchoti, director-general of the Fine Arts Department, said.

Ayutthaya was established in 1350 by King U Thong as his capital. The city lasted for 417 years and was ruled by five dynasties and 34 kings. It was lost to Burmese invaders twice. The last invasion was in 1767. Today, this city is one of Thailand's most popular cultural tourism sites.

"We have done a lot of studies about Ayutthaya. An oil on canvas [by a Dutch artist for VOC in 1663] portrays 10 major Asian port cities, including Ayutthaya. Although Ayutthaya Kingdom came to an end, there are many historical stories and documents about it. The conservation really began during the reign of King Rama V and Ayutthaya has become a World Heritage site. Last year more than 2 million people visited the site. Thais also come to Ayutthaya but may not know about it profoundly," the director-general said.

According to the Third Regional Office of Fine Arts, Ayutthaya City Island, or Koh Muang Ayutthaya, is full of waterways that served as transportation routes and water sources from the Ayutthaya period until a few decades ago. Over time, numerous canals were filled. Only a few major canals, including Khlong Thor or Khlong Chakrai Yai, remain. The 2.3km Khlong Thor runs past the west side of the old Grand Palace and mainly retains and supplies water from the Lop Buri River into the city and palace. The Ayutthaya Historical Park has been surveying, excavating and conserving Khlong Thor, which became clogged and narrow over time. The excavation revealed traces of old bridges as well as two brick watergates with holes and wooden poles. Chinese pottery and fragments of roof tiles were found along with newer objects, indicating the continual use of this canal from the Ayutthaya period until present.

Nearby, the department's archaeological excavation and conservation of the palace and Wat Phra Si Sanphet is now in progress. There were three palaces in Ayutthaya City -- the Grand Palace, Chantharakasem Palace, or Front Palace, for viceroys, and Wang Lang, or Rear Palace, for vice-viceroys. The Grand Palace was the home of kings. It was constructed according to the traditional belief of the centre of the universe, consisting of several halls. Wat Phra Si Sanphet served as a royal temple and boasts three tall stupas dedicated to three monarchs.

Outside Ayutthaya City Island, the recent excavations unveil interesting evidence at two deserted temples -- Wat Tawet and Wat Thanon Jeen. The first temple boasts ruins of a royal mansion of two former queens who spent the end of their lives there while the second one has pieces of several Chinese-style Buddha statues among its remains.

In all, Ayutthaya has a lot more precious art and knowledge for visitors to discover. The more we explore this old capital, the better we learn and understand Thai history, art and culture. The Songkran, or Thai New Year, Festival from today until Saturday is another good occasion for anyone to experience Thai tradition and culture. Today, there are merit-making activities in front of Vihara Phra Mongkolbophit. Throughout the festival, everyone can enjoy water splashing, especially with elephants, around the Ayutthaya Historical Park.

Visit www.railway.co.th or the SRT Call Centre on 1690. 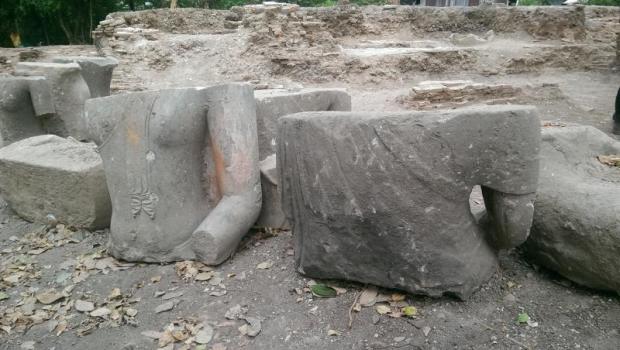 Located southeast of Ayutthaya City Island, Wat Thanon Jeen is called Wat Sam Jeen on Phraya Boran Ratchathanin's Ayutthaya map. This area near Khlong Nai Kai was a Chinese community during the Ayutthaya Period. Now a deserted temple, it boasts the ruins of a large badly vandalised stupa. This year's excavation found traces of a prayer hall and an old stupa. The most important finds are fragments of Chinese-style sandstone Buddha statues and a stone sign engraved with Chinese letters and the year 1766. Also unearthed were broken pieces of pottery, Chinese porcelain and roof tiles. This new discovery helps date the temple to sometime between the 15th century and before the fall of Ayutthaya in 1767. 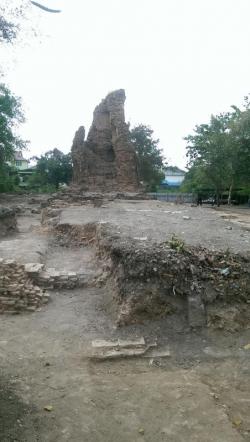 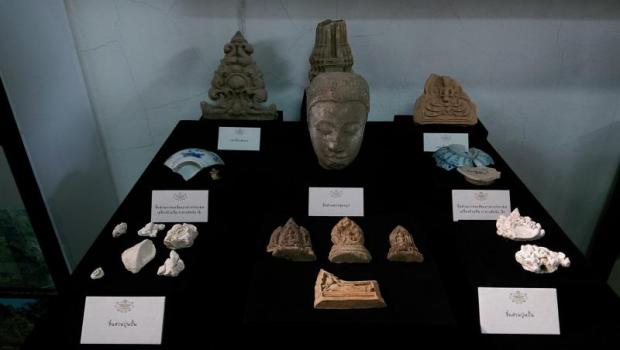 Wat Tawet is a deserted temple located near Wat Phutthaisawan. The date of its establishment remains unclear. However, the Krung Sri Ayutthaya Royal Chronicle, penned by Phra Phannarat of Wat Phra Chetuphon, states that Krom Luang Yothathip and Krom Luang Yothathep, two queens of Ayutthaya's King Phetracha, stayed in a royal mansion near Wat Phutthaisawan. The ongoing archaeological excavation found ruins of this royal mansion — a brick building with two stucco gables adorned with Western-style foliage and human face motifs. Also recovered were traces of an ordination hall, a prayer hall, a stupa, a pier, walkways and bases of three buildings, indicating the significance of this temple. 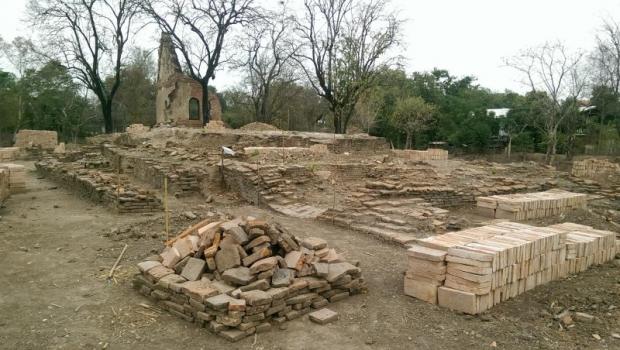 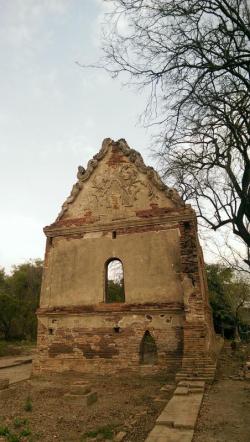 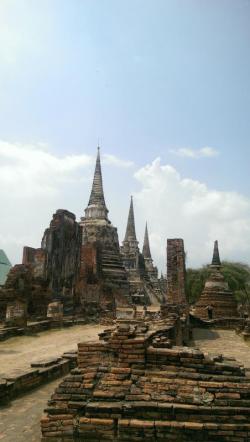 The Grand Palace of Ayutthaya was constructed during the reign of King Borom Trailokkanat who turned the original palace built by Ayutthaya's first monarch King U Thong into a royal temple — Wat Phra Si Sanphet. Archaeological excavations are being done in five areas in the palace and temple compound. Traces of toilets or tap water systems were found north of the palace's Wihan Somdet Hall as well as traces of the Treasury Department building nearby. Also unearthed were broken pieces of pottery, including those dating to the Yuan and later dynasties, as well as fragments of human figurines, bullets and corals. At Wat Phra Si Sanphet, ruins of an older building were found beneath the northern part of Phra Pa Leilai Hall leading to the ordination hall. 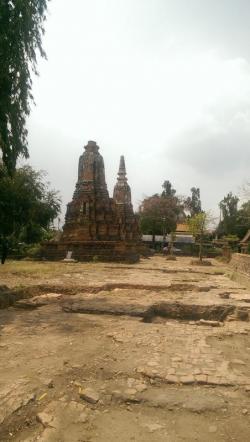 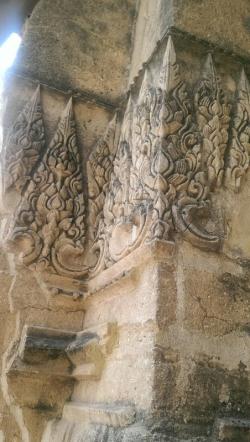 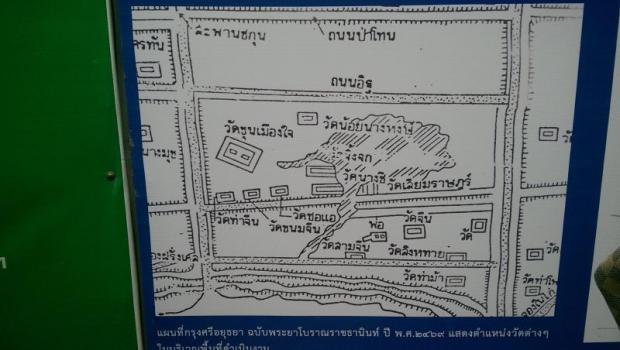 Phraya Boran Ratchathanin (Phon Tejagupta) was born at home in Bangkok on Feb 28, 1871. He graduated from Phra Tamnak Suan Kularp School in the Grand Palace in 1889 and worked as a teacher there. In 1894, he started his work at the Interior Ministry. He progressed fast due to his excellent performance and finally became the superintendent commissioner (Samuha Thesaphiban) of Monthon Ayutthaya (a region of several cities and towns) at the age of 35 in 1906. Monthon Ayutthaya consisted of Krung Kao (Ayutthaya), Ang Thong, Sing Buri, Saraburi, In Buri, Phrom Buri, Phra Phutthabat and Lop Buri towns. During the reign of King Rama VI, he was appointed Phraya Boran Ratchathanin in 1912. After serving as viceroy of Monthon Ayutthaya under a new system that lasted from 1916-1926, he worked as the superintendent commissioner again until his retirement in 1929. He passed away in 1936. He has been recognised as a pioneer for Ayutthaya studies. He had witnessed changes and helped develop the city for more than 30 years. He supervised the excavation of the Grand Palace of Ayutthaya in 1907. To prepare for it, he had studied many documents concerning the whereabouts of the palace's throne halls and temples inside and outside Ayutthaya City. He later wrote important books on the subject and created the map of Ayutthaya. 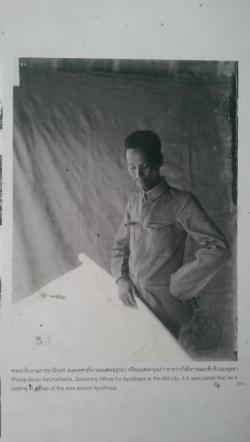 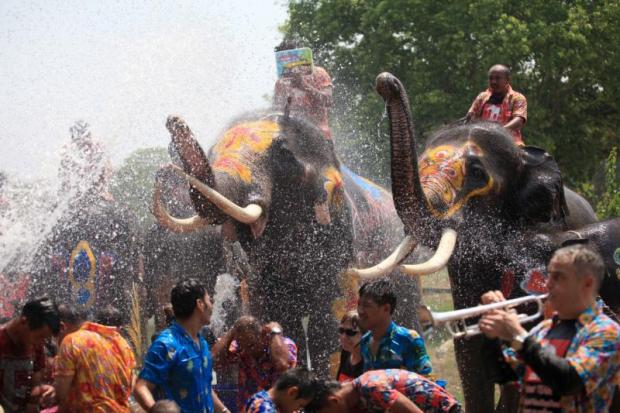 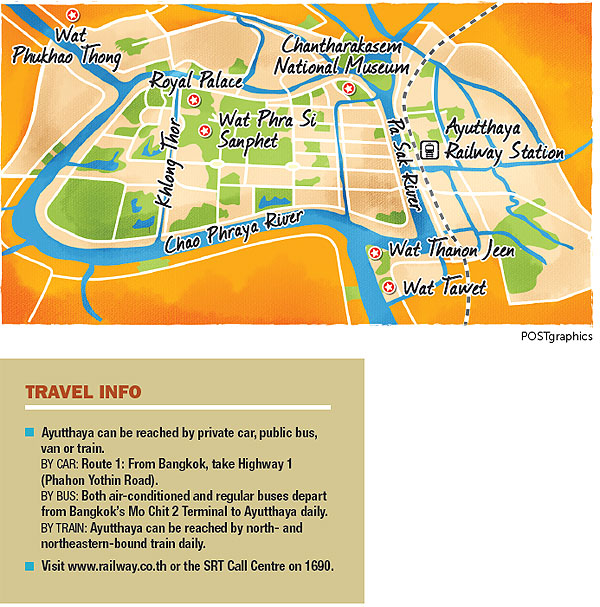