Khao Lak Canal flows slowly from a mountain to the village of Ban Khao Lak in Trang's Muang district. Both sides of the stream are green forest. The canal later merges with another canal called Lam Phu Ra which ends at the Trang River.

"We have to protect our forest so there will be water for our consumption all year round," said village headman Sawat Khunnui. The water originating from the Khao Lak Waterfall has never run dry. It's always clear and cold. This inspired the village headman to open a little adventure service to promote the community.

His idea was to introduce a canoeing service along Khao Lak and Lam Phu Ra canals. The distance is about 4.5km.

About half of the villagers agreed with the idea while the rest held out. They were afraid that their peaceful community would be changed while others were concerned that the small village couldn't attract any tourists. But the village head remained confident. He saw the successful model of the canoeing service of Wang Sai Thong Homestay in Satun as the role model.

Three years ago, he brought a team of his village committee to try canoeing along Lam Lon Canal in Satun. "After the trip, we agreed to give it a try. I was confident that our service would be able to attract tourists because our village has beautiful nature," he said. 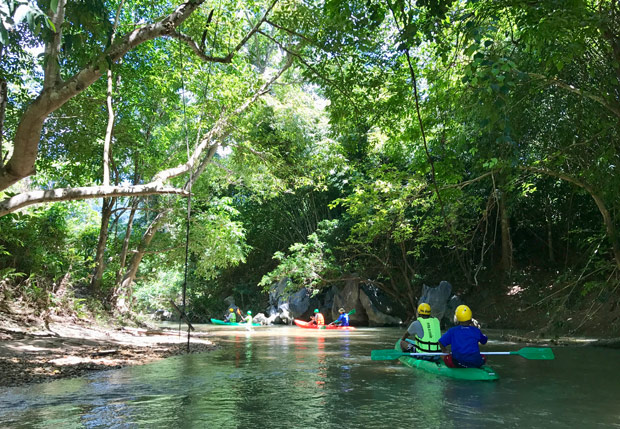 The village committee also had an agreement with its villagers that there would be only one canoeing operator and it must be owned by the community, not any private investor, said Sawat.

They didn't have any money when they started the service three years ago. They borrowed 15 canoes from Wang Sai Thong Homestay in Satun without any fee for six months. When the contract ended, they had enough money to buy their own canoes. They started with eight. Today Ban Khao Lak has 40 canoes to service visitors.

"It's the word of mouth that bring tourists to our village," he said, adding that today Ban Khao Lak welcomes at least three groups of visitors a day, he said.

Tham Kong Yia Shrine is located on Phloen Phitak Road. The shrine houses the Tham Kong Yia deity. A legend has it that more than a century ago, a Chinese man left his hometown in Guangdong of southeast China to find a better life. He brought incense ashes and a sacred fabric from a famous shrine in his town with him as his protection. After settling in Trang, he paid respect to the deity through the ashes and the cloth every day until other people followed suit. They built the humble shrine for the deity and the present shrine was built in 1953. Today Tham Kong Yia deity is one of the highly respected Chinese gods among the locals.

Before starting the canoe trip, every visitor must stop at the Ban Khao Lak service centre, which is located next to Ban Khao Lak school. At the centre, Sawat will brief visitors about their canoe service. Each visitor must wear a helmet and a life vest. There is also small-size life vests for kid.

"It will take you about two hours for the canoe trip. There are also some stops for you to rest and swim in the stream," he said.

We were warned that we would get wet although the stream is calm. The centre also has waterproof bags for phones for visitors to borrow. About 16 of us boarded two pickup trucks. About 10 minutes later, we stopped at a concrete bridge where we got on our canoes. One canoe is reserved for two passengers. As I am not good at canoeing, I asked staff to paddle for me.

The birthplace of former prime minister Chuan Leekpai, 78, has become one of the attractions in Trang. The property is located on a 5 rai plot of land on Wisetkul Road. From the main gate, you will walk pass the simple two-storey house, which is not open for tourists as his brothers live there. The part where tourists can walk around is the large garden. You will hear birds chirping and see the old green jeep, which once was used by Chuan as a young politician. The house is open daily and without an entrance fee.

The trip was quite relaxing because our canoes were propelled under the shade of trees during the first half of our journey. When we reached the second half of the journey to Lam Phu Ra Canal, it was hard to find shade. I felt like a dried fish under the strong sunshine. This might be the reason why there is a rest area for us to swim or take a dip in the stream.

After the two-hour journey, we returned to the service centre to change our clothes and had lunch, prepared with local vegetables. It was cooked by a group of housewives. The group also produces kluay chab (crisp-fried banana chips coated with the mixed butter and sugar or with salt), which is certified as the One Tambon One Product of Ban Khao Lak.

For visitors who love more adventure, they can ask the village head for trekking trips in the forest to see the Khao Lak waterfall or caves. Pitching camps in the forest for a night or two is also possible, said Sawat. 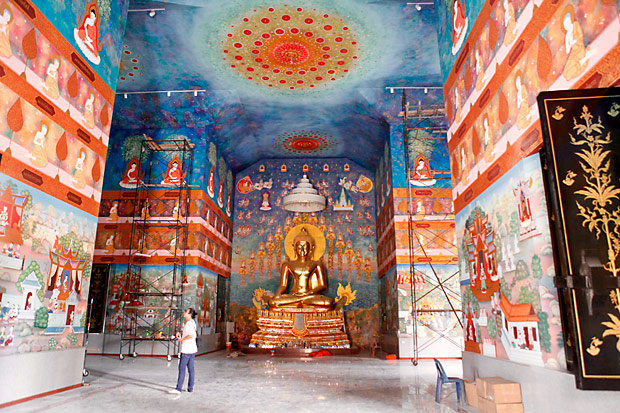 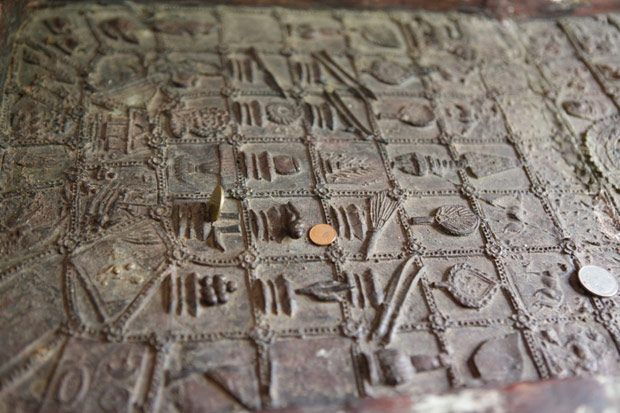 Wat Kaphang Surin was built in 1897. It houses old wooden Buddha images in its 80-years-old ubosot (ordination hall). The temple is building a new hall which now houses the large Buddha seated sculpture. Not far from the temple is Kaphang Surin Public Park, a popular place for locals to picnic.

In addition to the canoeing experience, we also tried a tuk-tuk ride to tour the old city of Trang. The vehicle is called "tuk-tuk hua kob", meaning a three-wheeled motorised vehicle with a frog head. To me the front view of the tuk-tuk looks like Kermit the Frog. The mini-trucks made by Daihatsu Motor were imported to Thailand during the 1960s and were modified by having two rows of passenger seats and a roof.

They were once a popular public transportation in Trang, but today the popularity has faded because they can't drive fast and people have an alternative service such as the songthaew (a modified pickup with two benches at the rear for passenger seats).

To promote the old mode of transportation, a group of tuk-tuk hua kob drivers joined hands to form the Tuk Tuk Club of Nakhon Trang. It has about 30 members and offers a city tour of popular tourist attractions such as Chinese shrines, old temples like Wat Kaphang Surin, old churches, the house of Chuan Leekpai, a two-time former prime minister, old shophouses, the clock tower and the train station.

The service charges are 250 baht, 450 baht and 600 baht for one, two and four-hour rides respectively. One tuk-tuk can accommodate up to five passengers. You can also ask drivers to bring you to local restaurants to try spicy southern food such as kaeng lueang (a sour and spicy yellow soup with snapper), khua kling (stir-fried pork with chillies) and phat sataw kung (stir-fried bitter beans with shrimp and kapi, or shrimp paste).

If you have time, spare one or two days to tour the city of Trang then you will find its hidden charms. 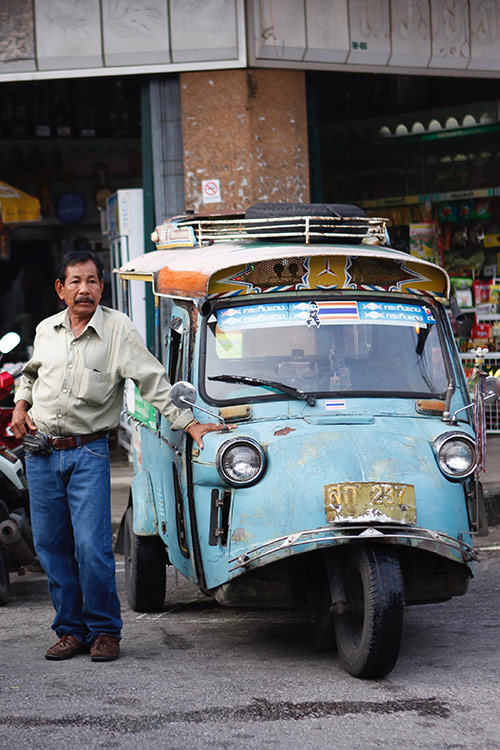 A driver of tuk tuk hua kob waits for his passengers at a fresh market.

The old quarter of the city of Trang is where you can explore either by riding tuk tuk hua kob or by foot. Some streets have names resembling those in Bangkok such as Ratchadamnoen and Rama VI. Lining both sides of several roads in the old town area are shophouses with some buildings renovated to be hotels and coffee shops. Also found is street art such as paintings of a rubber plantation, a garden of Jacaranda trees with blooming purple flowers and Morakot Cave of Hat Chao Mai National Park. 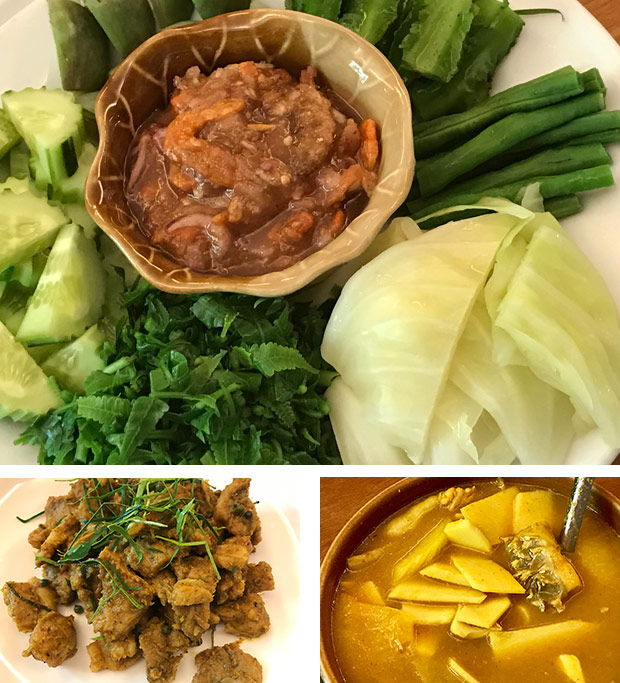 These local dishes are served in Ban Suwimon restaurant on Wian Kaphang Road. The restaurant has four out of five dishes that are certified as authentic southern food by the Tourism Authority of Thailand. The specialities are namphrik kung siab (spicy chilly dip with prawn), kaeng lueang, khua kling and phad sataw. TAT’s certification has been issued since last November under the ‘Amazing Thai Taste’ programme. It is the guideline for tourists to enjoy the local dishes of five regions. The fifth southern dish promoted by TAT is kaeng tai pla (a very hot salty curry made with fermented fish innards).

- Ban Khao Lak Canoe Service Centre is open daily from 10am to 4pm. The centre is located in tambon Ban Nam Phut, about 28km north of old town of Muang District. The service charges are 200 baht for an adult and 100 baht for a kid including safety gear. If you travel in a group and would like the centre to prepare you a lunch, it will cost 150 baht per head and that includes a set of five side dishes.

- For those who take public transportation, take a songthaew from the city. The route is Trang-Nam Phut and get off at Wat Phu Khao Thong. The temple is about 3km from the canoe centre. Then call the village head at 082-420-4691 to pick you up.