The path to nirvana
Travel

The path to nirvana

published : 4 May 2017 at 04:00
newspaper section: Life
writer: Pichaya Svasti
Lumbini in Nepal is on the foothills of the Siwalik Range in Rupandehi and is the birthplace of the Lord Buddha. Buddhist literature says the newly-born Prince Siddhartha took seven steps and uttered an epoch about ending the suffering of humanity when his mother Queen Maya Devi of Sakya King Suddhodana of Kapilavastu gave birth to him in the Lumbini Garden on the way to her hometown Devadaha in 623 BC. Must-sees at Lumbini, a major pilgrimage site and World Heritage site, are Maya Devi Temple Shrine, the Ashoka Pillar and bodhi tree. The shrine bears the ruins of the foundation of the early Maya Devi Temple that dates to the 5th century BC. The main objects of worship are the Nativity Sculpture depicting Queen Maya Devi holding a branch with her right hand for support in the time of her delivery and the Marker Stone buried in the sanctum pinpointing the birth spot of the Buddha. Outside the shrine is the Ashoka Pillar, erected by King Ashoka the Great in 249 BC. The inscriptions on the pillar, engraved in Brahmi letters and Pali language, are still intact. Pichaya Svasti

Riding on a bus on rocky roads, taking an overcrowded train and going to the fields when nature calls is now in the past for those wishing to visit four major Buddhist pilgrimage sites in India and Nepal -- Lumbini, Bodh Gaya, Sarnath and Kusinara -- due to better roads, facilities and transportation options. 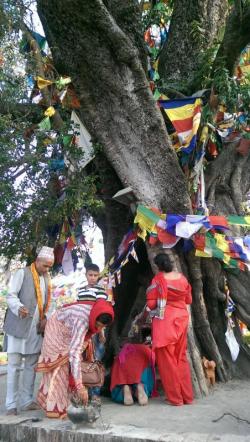 Lucknow is the capital city of Uttar Pradesh and mixes ancient and modern culture harmoniously. More importantly, Lucknow is the gateway to two of the four Buddhist pilgrimage sites since travelling by bus and car from Lucknow takes about five hours (323km) to Kusinara and about four hours (176km) to Sravasti, from where it takes about five hours (about 220km) to Lumbini in Nepal.

"Thai Smile has two convenient routes to the four pilgrimage sites -- two on each route. If you do not want a tough trip, you can fly to Lucknow and travel to Sravasti, which takes about four hours. From Sravasti, you can go to Lumbini, the birthplace of the Lord Buddha. From Lumbini, you can go to Kusinara, the place where the Buddha passed away and attained Parinirvana. Each way takes four to five hours. From Kusinara to Lucknow, it takes about four to five hours as well," said Busaba Sangkawipha, former THAI vice-president, Product and Guest department, who was an honorary tour leader for the recent media trip to India's pilgrimage sites.

Another recommended route is taking a Bangkok-Gaya flight with Thai Smile to visit Bodh Gaya where the Lord Buddha attained enlightenment and then travel by car, bus or train to Sarnath where the Buddha delivered his first sermon.

On this trip, after the aircraft landed at Lucknow's Chaudhary Charan Singh International Airport shortly after midnight, our group spent a night in Lucknow and left for Sravasti in the morning.

Today, it is no longer difficult to travel from Lucknow to Sravasti and Lumbini since the roads have been improved and a few new Thai temples have been built on the way as resting points for pilgrims. The first stop is Wat Siddhartha, a small temple located between Lucknow and Sravasti, and the second is Wat Thai Nawarajrattanaram 960 near the India-Nepal border, with clean toilets, a clinic, a resting pavilion and a canteen for pilgrims.

We arrived in Sravasti shortly before lunch and then headed to Wat Jetavana Maha Vihara, where the Lord Buddha stayed for 19 years. We passed the fields where the three sinners, Phra Devadatta, Jinjamanavika and Nanda Manop, who attempted to discredit the Lord Buddha and destroy Buddhism, lost their lives in sinkholes.

After praying in front of the ruins of the old temple, we visited the remains of the house of Anatha Bhithika Setthi, a Buddhist patron, and the house of the father of one of the Buddha's principles Phra Angulimala. Before sunset, we walked up the Place of Twin Miracles -- the hill where the Lord Buddha showed his miraculous abilities.

The next morning, our group left Sravasti for Lumbini, Nepal. We reached Wat Thai Nawarajrattanaram 960 at 9am to have breakfast. During the winter, which is high season, queues at border immigration can take more than three hours, however since we were there at low season it took our group only 45 minutes to be processed.

From the border, we travelled by bus for about 45 minutes to Lumbini, a World Heritage site. We first visited Maya Devi Temple Shrine where the Lord Buddha was born. After staying overnight in Nepal, we travelled about five hours to Kusinara, the city where the Lord Buddha passed away, and another five hours to Lucknow. We also visited the exquisite Wat Thai Kusinarachalermraj. After making great merit at the most important places of Buddhism, we flew back to Bangkok with delighted hearts and less fatigue than we feared. 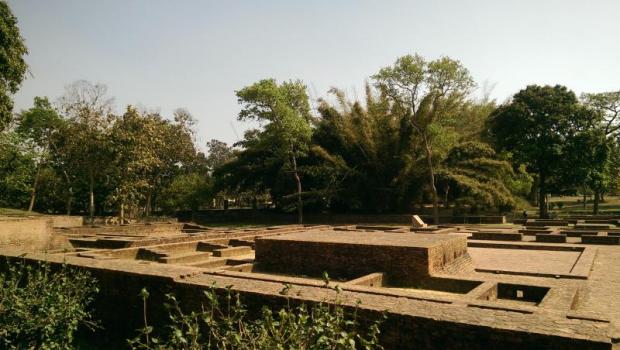 Wat Jetavana Maha Vihara, or Sahet Monastery, was commissioned by Anatha Bhithika Setthi, a billionaire of Sravasti, on an 80 rai plot for the Lord Buddha to stay. Upon arrival, pilgrims will first see the ruins of the Dhamma Council building where the Lord Buddha delivered more than 1,000 sermons. Nearby are the living quarters for female monks. Also in the compound are ruins of the Lower Court, Appeals Court and Supreme Court from the Lord Buddha's times for handing rulings over religious issues and where Phra Ananda, Phra Upali and Lord Buddha's only son Phra Rahul worked for the courts. There are also ruins of the stupa of arahants, who served the Lord Buddha to spread Buddhism and dhamma. Pichaya Svasti 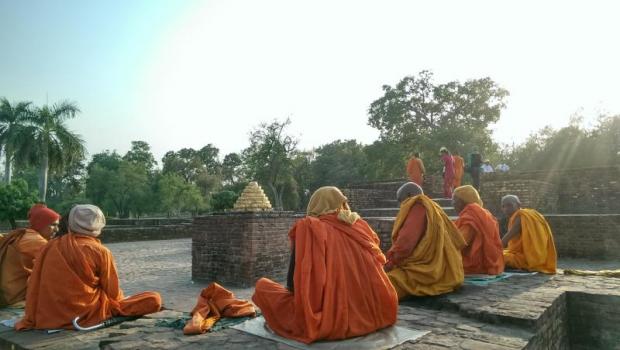 Among Wat Jetavana's major buildings are the ruins of the Lord Buddha's living quarters for different seasons, including the famous Mulakhantha Kuti (Rainy Season Residence), the Summer Residence made of pine wood and the Winter Residence. Near the Summer Residence are the ruins of the living quarters of Phra Ananda, the Lord Buddha's close aide. Near the Winter Residence is the temple's hospital. Other sites are the living quarters of Sariputra and Mahamoggallana, the Lord Buddha's two chief disciples who had great intelligence and magical powers respectively, Phra Anurutha, who had magical eyes, Phra Sivali, who brought good fortune, and Phra Mahakasapa, who was an excellent pilgrim. Nearby the residence of Phra Mahamoggallana is the debris of the stupa of Phra Angkulimala. Pichaya Svasti 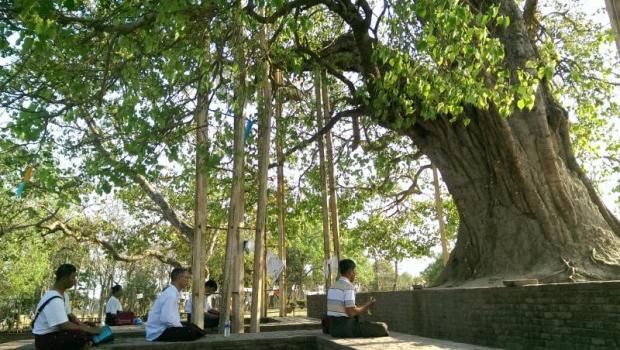 One of the must-sees at Wat Jetavana Maha Vihara is the Ananda Bodhi tree, grown by Lord Buddha's close aide Phra Ananda when the Buddha was 49 years old. The sapling was brought from Bodh Gaya, the place of the Buddha's enlightenment. The existence of this tree was recorded in an inscription by Chinese monk Fa-Hien who travelled to India and Ceylon between 399–414 AD and visited Wat Jetavana. Pichaya Svasti Kusinara was part of the ancient Malla region during the Lord Buddha's time. It is the home to Salavanodhayan (the forest of cannon trees), where the Lord Buddha passed away and attained Parinirvana. The 65m Parinirvana Stupa, commissioned by King Ashoka the Great for Rs 100,000, is constructed over the exact spot of the Buddha's death. Parinirvana Vihara also houses a 7m-long reclining Buddha, built from red sandstone during the Gupta period (280-550 AD), and is adorned with the sculptures of three of the Buddha's disciples Supata, Anurutha and crying Ananda. Pichaya Svasti Within the old city walls are the ruins of the official residences of Anatha Bhithika Setthi, a billionaire and economic adviser of King Pasenadi, and Bhakava Brahmin, King Pasenadi's general adviser and the father of Phra Angulimala. The houses stood opposite each other. Anatha Bhithika Setthi was a major patron of Buddhism and built the Jetavana Monastery for the Lord Buddha to stay in Sravasti. Bhakava Brahmin was the father of one of the Buddha's enlightened disciples (arahant) Phra Angulimala, who had killed 999 people before the Lord Buddha taught him to be a good person. He was later ordained as a monk. Pichaya Svasti 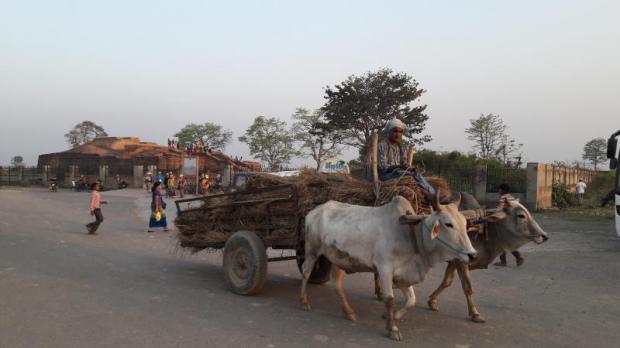 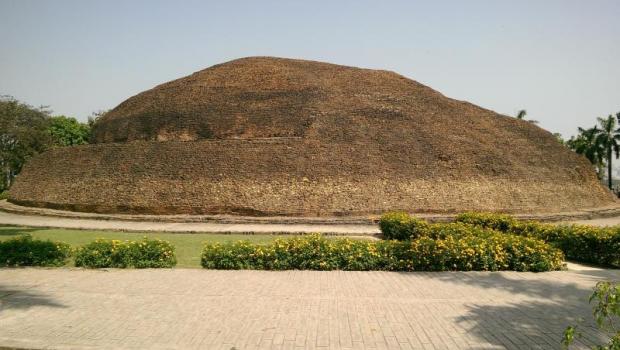 Another important pilgrimage site in Kusinara is Makutphantha Chedi. The stupa is built on the site where the body of the Lord Buddha was cremated eight days after his passing. It is about 1km away from Parinirvana Stupa and near the Hiran-navati River, where funerals have long been held. Pichaya Svasti 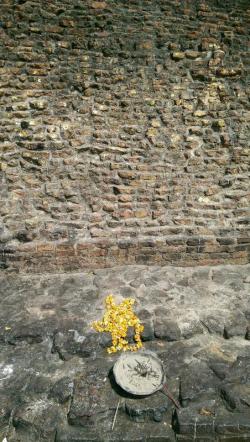 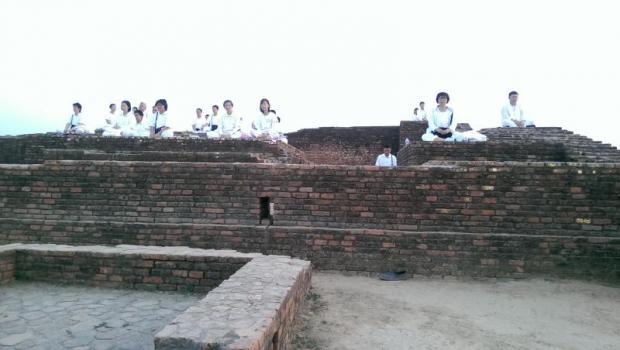 The Place of Twin Miracles in Sravasti is the hill where the Lord Buddha showed his miraculous abilities in two separate incidents. The first was the Yamok Patihara Miracle under a mango tree to make six arrogant heads of other sects humble. The second was the Lord Buddha's journey to heaven to visit his late mother Queen Maya Devi. Pichaya Svasti 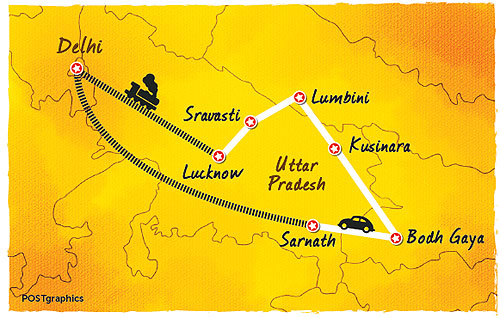 Thai Smile Airways operates flights from Bangkok to Lucknow on Tuesday, Thursday and Saturday (departure at 10pm and arrival at 12.20am) and flights from Lucknow to Bangkok on Wednesday, Friday and Sunday (departure at 1.20am and arrival at 6.25am). The starting net price is 4,135 baht per person each way. It also flies to Gaya, Varanasi and Jaipur. Visit www.thaismileair.com.

All the cities with pilgrimage sites are accessible by car, public buses and train. Public bus tickets are only available at bus terminals. To take trains, passengers can book online at www.indianrailways.gov.in or at train terminals. The most convenient way is to hire a car.