published : 29 May 2017 at 15:32
writer: New York Times
Ethnic Shan-ni villagers wash and bathe in the Indawgyi Lake, as a boat of pilgrims passes by, in the village of Lwemun, Myanmar, March 25, 2017. Despite the encircling mountains and buffering remoteness, Indawgyi Lake is straining under many of the same environmental and conflict-related challenges that are stressing the fragile nation. (New York Times photo)

LONTON, Myanmar -- Cresting a mountain pass on a freshly bulldozed road, Indawgyi Lake and its valley appear below, pastoral and calm.

The 300-square-mile surface, one of the largest freshwater bodies in Southeast Asia, reflects the clouds. A plaid quilt of rice paddies is squeezed between the water and jungled mountains. Widely spaced hamlets dot the shores.

Besides a few spindly mobile phone towers, there are few signs of the globalisation swamping Myanmar as the nation opens itself after half a century of isolation under a military dictatorship.

For centuries, the indigenous Kachin people in Myanmar’s remote north planted rice when the lake flooded their fields during the monsoon, fished its waters and hunted its wetlands and the surrounding mountains. As Ma Thwe Thwe Win, 32, a local birding guide, explained: “The lake gives us fish, waters our fields, and brings the birds here. It is everything to my people.” 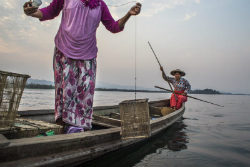 Today, every morning and afternoon, fishermen still paddle out, singing Burmese songs to themselves,

In the mid-1990s, Myanmar’s army captured the Hpakant jadeite mine, the world’s richest, from the Kachin Independence Army, a rebel force of around 10,000 men, about 35 miles north of Indawgyi Lake. The mine was mechanised and expanded, and soon many of Indawgyi’s inhabitants had traded their native villages for squalid mining camps where heroin addiction ran rampant. Increasing commercialisation of the region’s economy also led to the expansion of illegal gold mines in the mountains above Indawgyi Lake.

At about the same time, young men from other regions of Myanmar began to flood into the valley as their elder brothers inherited what land remained in their hometowns and an ill-conceived dam flooded prime farmland nearby. These migrants established five villages and introduced fishing techniques like small-gauge gillnets and electroshock fishing that began depleting the lake’s fish stocks.

Another kind of visitor also appeared: foreign tourists, seeking the peace of rural life or a glimpse of rare migratory lake birds. Adventurous souls would ride the colonial-era train north from Mandalay and then bump over the mountains on the back of motorbike taxis to the tiny town of Lonton, a row of lakeside teak houses on stilts sheltering about 2,800 inhabitants.

But then in 2011, a cease-fire broke down, and the army occupied the valley while the KIA locked down the highlands. Today, on the outskirts of town, peasants riding ox carts and dump trucks heading to Hpakant line up at candy-cane striped sawhorses wrapped in barbed wire. Machine-gun-wielding soldiers wave the traffic through after inspecting it, as European backpackers in jean shorts and flip-flops lounge at the town’s four food stalls across the road.

Tin Myaing, owner of the ramshackle Indawmahar Guesthouse, one of the two in town, estimates that 400 tourists visit annually, down more than 50% from its peak. A sign on the wall warns day trippers to return by dark and not to stray off the beaten path -- hand-drawn maps mark potential rebel areas with cartoonish skull and crossbones. Sometimes, land mine explosions echo from the canyons.

Most foreigners visit Inn Chit Thu, a non-profit ecotourism group, the only tourist-centred business in town beside the guesthouses. From an office decorated with the mounted plumage of two owls, young workers rent out kayaks and bicycles.

If fighting is low, as it has been recently, they lead treks into the safe parts of the mountains. They also offer bird-watching tours, as it was rare birds like Pallas’ fish-eagles, Oriental darters and sarus cranes that first enticed foreigners here.

Every year, rare and endangered birds from China and Siberia migrate to Indawgyi Lake’s flooded grasslands. About 73,000 hectares of the valley were designated a wildlife reserve in 1999, and in 2014 it was nominated as a UNESCO World Heritage sanctuary for supporting a “diversity of globally threatened wildlife”, including the white-rumped and slender-billed vultures, and at least three endemic fish species and one turtle. Hog deer, Bengal slow loris, Asian elephants and clouded leopards also lurk in its jungles. 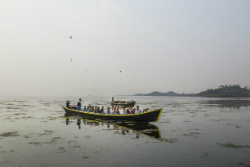 Pilgrims in a boat make their way to a big wicker Buddha in Nammilaung, one of the attractions around Indawgyi Lakein Myanmar, March 25, 2017. (New York Times photo)

The domestic tourists that ride longtail boats to the “floating” Shwemyitzu Pagoda, which is said to contain several of the Buddha’s hairs, have a different relationship to the local wildfowl than the international birders: They summon Hitchcockian swarms of sea gulls with confetti showers of breadcrumbs.

But they are not just feeding them; they are also accumulating Buddhist merit, which could help them avoid reincarnation as such an animal. Every year, 80,000 pilgrims camp on the lake’s shores during the pagoda’s annual festival.

The Buddha’s locks in the Shwemyitzu Pagoda are not his only traces in the valley: a legend relates that Indawgyi Lake was created when the ruler of a prosperous and sinful kingdom insulted him, and the region’s guardian spirits retaliated with a flood.

A modern local story adds that when a foreign tourist strapped on scuba gear and flippered into Indawgyi Lake he found the ruins of wooden palaces in its depths. But he also encountered huge fish with bared human teeth: ghosts of the deceased offenders. Since then, no one has dared investigate what lies beneath its surface.

Just a few miles south of Lonton, the town of Maing Naung straddles Khaung Tong Creek. A decade ago, the waterway coursed pristinely into Indawgyi Lake, but it has since become choked with mud and chemicals from an illegal hydraulic KIA gold mine.

Villagers warn foreigners not to venture upstream. On its banks stands a convenience store, stocked with bags of potato chips, shampoo and other sundries -- as well as a scale and a miniature blowtorch for processing the raw gold that freelance miners sell before stocking up on supplies to take back into the jungle.

Elevated mercury levels and increased sedimentation make some environmentalists fear that the distinctive ecosystem is at risk. Other problems threaten the watershed too. Illegal logging is thinning the forests that once protected hillsides from eroding into the lake. Overfishing and the use of banned techniques like dynamite, cyanide and electroshock fishing have depleted fisheries that many locals depend on.

“The ecology of Indawgyi Lake has been severely impacted by silt and mercury pollution from mining and overfishing, so much that it’s become hard for the local fishers to make a living,” said Oliver Springate-Baginski, a professor at the University of East Anglia who has led an environmental survey of the area.

He added, “The conflict has undermined the effectiveness of regulatory mechanisms, and powerful people have been able to exploit the natural resources at the expense of less influential locals.” 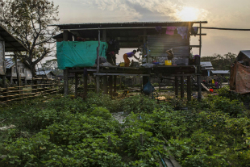 A woman takes a bath at her house while another hand-pumps water from Indawgyi Lake, in Lonton, Myanmar, March 24, 2017. (New York Times photo)

Nongovernmental organisations, local fishermen and the government are working to address the problems.

“Now the lake’s communities, with assistance from NGOs, have established fishing-free zones that have been recognised by the government,” said Julia Fogerite, a Myanmar-based environmental researcher. “Continued collaboration has the potential to improve the management of the lake and ensure its future health.”

Despite the nation’s tropical latitude, the mountain elevation chilled the air on a recent night. The inhabitants of Lonton huddled around fires by the roadside, listening to the night frogs as they had in the old days. The asphalt road to Hpakant lay empty, though during the day it was packed with dump trucks and motorcyclists, as the KIA roamed beyond the checkpoints after sunset.

Not long ago, mahouts prodded their working elephants to help push trucks free of muddy quagmires on the road. Today, the only unpaved section is in the mountains above -- and when it is completed this year, it will allow the outside world even freer access to Indawgyi Lake.

Inside a nearby house, an old boat captain watched DVDs of traditional Indawgyi dances that now are spotted only at festivals. He poured himself shot after shot of whiskey. Each time the short clip finished, he cued it up again.