Built more than 60 years ago to connect rural suburbs and townships to the city’s commercial heart, its trains -- some almost as old as the line itself -- move nearly 100,000 people a day, in a slow, 28-mile loop around Myanmar’s biggest city.

Like much else in the country, which is still emerging from decades of isolation under military rule, the Circle Line is a functioning, if fading, piece of the past. But modernisation is on the way, and commuters who take the train daily say it cannot come soon enough.

Some of the trains are Hungarian imports from the 1960s. Newer ones, from Japan, were introduced in 2007, but even those were old, decommissioned trains. Comforts are scarce in the oldest carriages; the bench seats are hard, and many of the fans seem to be broken.

The older trains hobble along at what can seem little more than jogging speed. Passengers sometimes hop on and off while the train is still in motion.

My trip started on Platform 7 of bustling Yangon Central Station, Myanmar’s largest train station, built by the British in 1877. Heading anti-clockwise, the train crawled through sprawling rail depots and repair yards. Soon the larger, national trains branched off and headed north, and the six tracks thinned to two, servicing the Circle Line alone. 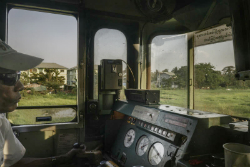 An engineer operates a Circle Line train through the rural northern reaches of its 28-mile circuit around Yangon, April 3, 2017. (NYT photo)

As the train moved up Yangon’s east side, mildew-stained buildings started to give way to farmland. The carriages gradually emptied out as the train looped around the city’s northern reaches, past open fields, a golf course, a military base and palm huts where some of Yangon’s poorest live.

Railway employees are supposed to wear crisp, white Myanmar Railways shirts with epaulets. But at some of the route’s 38 stations, like Danyingon in the north, they frequently strip down to their undershirts to keep cool in the sweltering ticket booths and control rooms, which often do not have a working fan.

Coming down along the city’s western edge, the train passed Insein Station and the notorious prison of the same name, where the military regimes locked up dissidents -- even monks, after the so-called Saffron Revolution in 2007. Approaching downtown, the train began to fill up again, with stylishly dressed professionals in jeans and pressed shirts. Finally, it pulled into Yangon Central Station, completing the circle, a little less than three hours after its departure.

At just 15 cents to ride the entire loop, the Circle Line train is affordable even for the poor -- and for many years, few others would use it, said Moe Moe Lwin, director of the Yangon Heritage Trust.

“The public impression is that it is dirty, slow, unreliable,” Moe Moe Lwin said.

“Only the poorest people used it because they had no choice, but it was very irregular and inefficient,” she said. “The far satellite towns only had the railway network to access the city, because the buses would not service them.”

“It was mainly used by vendors taking their goods to market, so blue-collar workers would not use it because it was too dirty and full of produce,” Moe Moe Lwin said.

But that equation has changed in recent years, as economic growth and neglected infrastructure have resulted in crushing traffic on Yangon’s streets. More and more commuters now see the Circle Line as a sensible alternative to spending hours in a car.

A bus service introduced in January has proved so inefficient that it seems to have caused even more people to use the train. Daily ridership has since soared to 95,000, from 75,000, said Zaw Lwin, a divisional traffic manager for Myanmar Railways, which operates the Circle Line. 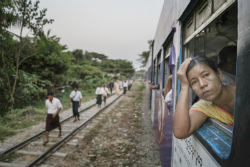 A passenger looks out of a Circle Line train as others who just disembarked walk along the tracks in Yangon, April 8, 2017. (NYT photo)

With its archaic fixtures and slice-of-life appeal, its crowded carriages with vendors selling fruit and newspapers, the train has become a draw for tourists seeking a picturesque experience. But commuters would gladly trade all that for a more efficient service.

“We need more trains, and modern trains,” Khin Hnin Oo, 41, a teacher, said as he rode the Circle Line home toward Mingaladon, north of the city. “It will be good for us. Yangon has too many cars, and the buses are overcrowded.”

Myanmar Railways plans major changes for the Circle Line by 2020, funded in part by a $212 million loan from Japan’s development agency. All of the trains are to be replaced, along with the ageing tracks, and the manual, push-button signalling system is to be automated.

A large market next to that station overflows onto the platforms and tracks, where villagers sell their mangoes, potatoes, watercress and other kinds of produce.

Officials hope to nearly triple the line’s daily passenger numbers, to 263,000. Htun Aung Thin, general manager of Myanmar Railways, told local news outlets that the new service would be faster, with trains completing the circuit in less than two hours.

Modernisation would put an end to many of the Circle Line’s anachronistic charms. That might make it less appealing to foreigners looking for a slice of old Yangon, or Rangoon, as it was once called.

But most commuters would welcome the trade-off.

“Upgrading the public transport system is the best solution for the city,” Moe Moe Lwin said.