In the footsteps of King Rama IX
Travel

In the footsteps of King Rama IX

On the shores of Lake Geneva, Lausanne is where the late monarch spent his formative years

published : 20 Jul 2017 at 04:00
newspaper section: Life
writer: Karnjana Karnjanatawe
Visitors can take a 20-minute train ride from Zermatt to the Gornergrat viewpoint to get a panoramic view of the snow-capped mountain range. Those who love adventure can trek down from the top of the mountain to Zermatt, which may take about four hours. They can also ride mountain bikes down the hilly road. Along the route, visitors can make a stop at Riffelsee Lake (2,757m above sea level) for a better view of the Matterhorn and its reflection. An alternative is to ride a train down one station to Rotenboden and walk down the slope to the lake.

A main reason for Thais to visit Lausanne, the French-speaking city on Lake Geneva in Switzerland, is because it is where the late King Bhumibol Adulyadej spent 18 years of his life, from 1933 to 1951.

The capital of Vaud state, Lausanne is part of the "In The Footsteps Of HM King Rama IX" themed trip, initiated by Kuoni travel agency and hosted by Switzerland Tourism Organisation and Swiss Airlines. The idea is to strengthen relationships between Thailand and Switzerland.

Known as the University City, Lausanne is home to 144,000 people of which 42% are foreigners, said Ellis Pagani, a local guide. 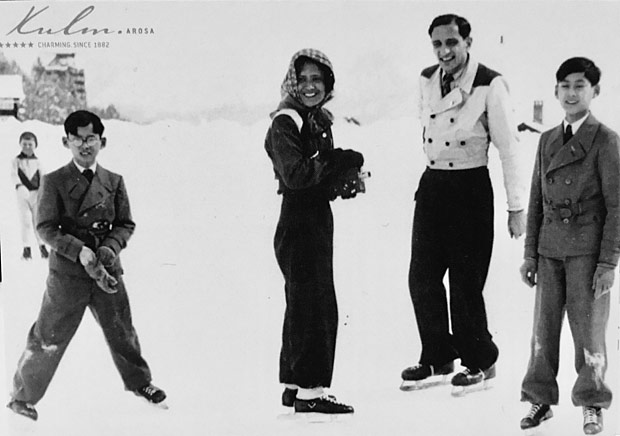 The royal family ice-skating in Arosa with their private tutor Cleon Seraidaris. This postcard is one of a collection Arosa Kulm Hotel provides for guests.

"Lausanne is not a big city," she said. The city was built on slopes made by three hills and two rivers. It faces Lake Geneva and it takes a 40-minute boat trip to get to Évian in France, which is on the other side. Many French workers crossed the lake to work in Lausanne because the city has a stable economy, Pagani added.

Lausanne is a "dynamic, open and multicultural city" where people from many parts of the world come to work, live or study, she said.

"This is the strength of Lausanne because local people are open-minded. Newcomers give new ideas as they bring with them their cultures, languages and religions. Together we can learn new things," said the guide, who was born in the Netherlands and has lived in Lausanne for 30 years. 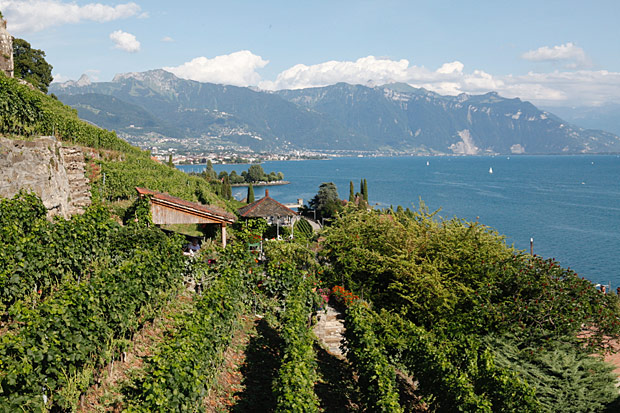 The Lavaux vineyard is between Lausanne and Vevey. It faces Lake Geneva and also houses old churches and houses from 16th to 19th centuries, including the Auberge de l’Onde restaurant where royals were regulars. The hillside vineyard was listed as a Unesco World Heritage site in 2007. 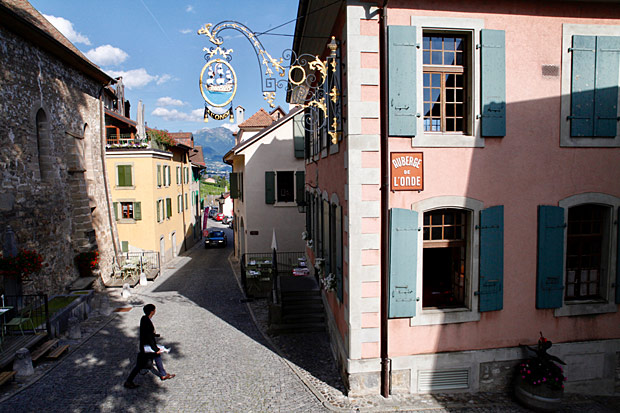 The Mahidol family settled in a modest apartment on Tissot Road. Today, the apartment is painted an eggshell colour with a green balcony. They lived in the apartment for two years before moving to the spacious mansion, Vadhana Villa, after nine-year-old Prince Ananda Mahidol became King Rama VIII. 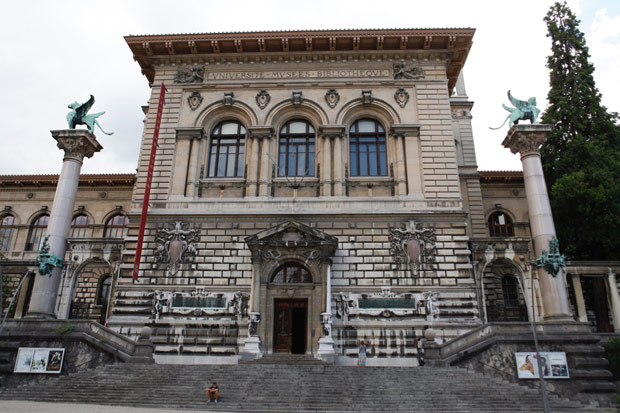 The Renaissance style building is the former University of Lausanne. The building is known as Palais de Rumine, or the Palace of Rumine, to honour Gabriel de Rumine (1841-1871), a Russian prince who gave 1.5 million Swiss francs to the City of Lausanne for public use. The city built a university in the 1990s and later the university was moved to a larger location. Today the building houses a library and five museums, for archaeology, fine art, geology, history and zoology.

In Lausanne, the children began their schooling at the Miremont School where they learned the basics of the French language, according to the book titled King Bhumibol And The Thai Royal Family In Lausanne written by Lysandre C Seraidaris, the son of Cleon, a private tutor of the monarchs.

According to Seraidaris, the young princes were enrolled in the boarding school Ecole Nouvelle De La Suisse Romande but they did not reside in the school. His father Cleon picked them up from Vadhana Villa and dropped them off at the school. The private tutor was also a major influence in the lives of the two young royals. During school breaks or free time, Cleon took them cycling, skiing, ice-skating, trekking or camping, and taught them how to build model ships, electrical gadgets and radios, and even invented board games. 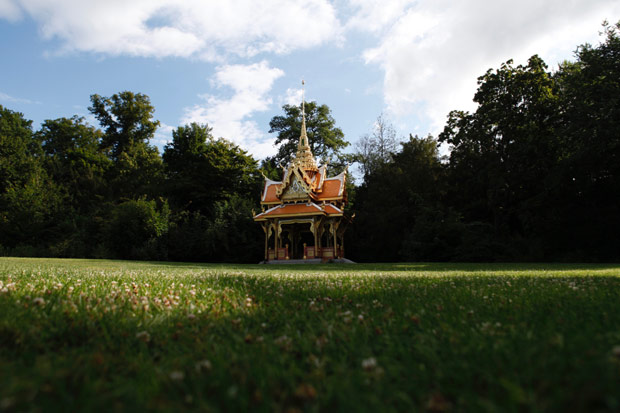 The Thai Pavilion was designed and built by Thai craftsmen before being assembled in the Parc du Demontou in 2007. It was built in the jaturamuk style, 6m in width and length and 16 in height. Last October, Thais in Lausanne visited the pavilion to pay respects to the late king by offering flowers in front of his photo. In another corner of the park stands the Monkey Fountain, which has a sundial and a sentence reads ‘Etre Toujours A L’Heure’, meaning ‘Always Be On Time’. It reflects that Swiss people are always on time, according to the guide. 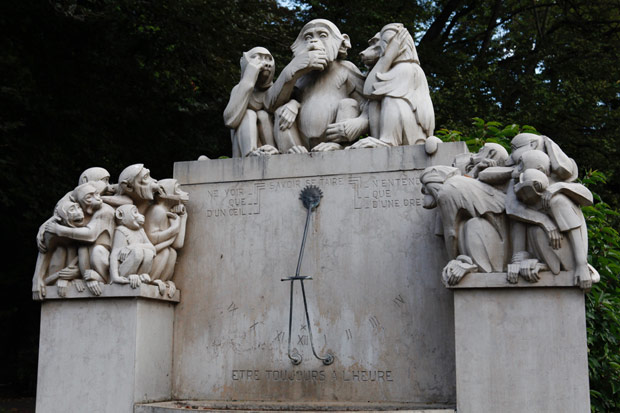 Vadhana Villa was near Parc du Demontou, which faces Lake Geneva. According to Pagani, the royal family visited the park often, strolling along the lake side.

The late king liked the Fontaine aux Singes (Monkey Fountain), which is a sculpture of three groups of monkeys where the central sculptures show three sitting monkeys; one closing the right eye, another closing its mouth with a hand and the third closing its ears. The fountain was created by Edouard-Marcel Sandoz in 1934.

Pagani said the monkey was believed to be one of the late king's favourite animals as he also referred to himself as "the monkey" (in his Patapoum Club, co-founded by the two young monarchs to administer their hobbies). 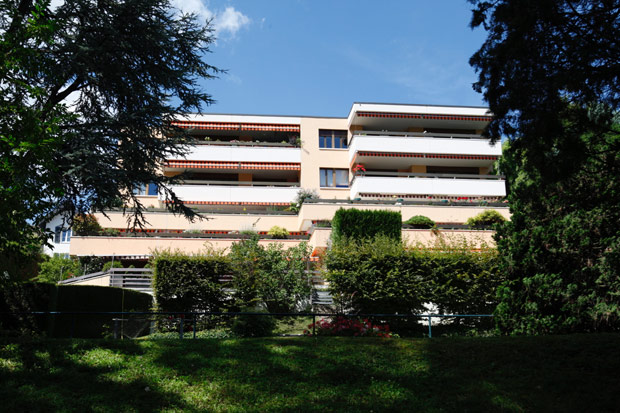 Vadhana Villa has changed a lot. When it was rented by the royal family, it was a 13-room mansion. It was later renovated to be a three-story building, with seven rooms, while a private garden was partly used to build a 50m swimming pool.

Not far from the fountain is the Thai Pavilion, a gift to the City of Lausanne to mark the 60th anniversary of the late king's accession to the throne and the 75th anniversary of diplomatic relations between Switzerland and Thailand, according to the Lausanne Tourism and Convention Bureau.

Thai visitors to Lausanne can explore the former Lausanne University where the late king studied science and later changed to law and political and social sciences after the tragic incident that killed his brother.

The university was relocated in the 60s to accommodate more students and the old building was converted into five museums and a library. 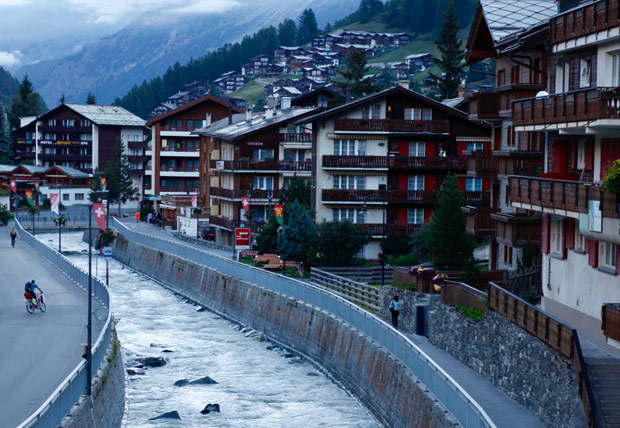 At the south of the country and at the foot of the Matterhorn, Zermatt (1,620m above sea level) is an environmentally-friendly town where only electric vehicles are permitted. It can be reached by the Glacier Express train, from which visitors can enjoy a scenic view of pine forests, green valleys and flower fields in the summer.

A trip to Switzerland can't be completed without a visit to Arosa, the German-speaking ski resort town. Arosa is where the two young royals learnt to ski. They stayed in connected suites at the Arosa Kulm Hotel.

The hotel has many photos of famous guests, including a portrait of King Ananda on a lobby wall and King Bhumibol, when he was young, on a wall leading to a Thai restaurant.

The highlight is to view the King Suite 427, where the late king stayed the 10 times he visited Arosa, according to the hotel's marketing director Jeremy Kunz. 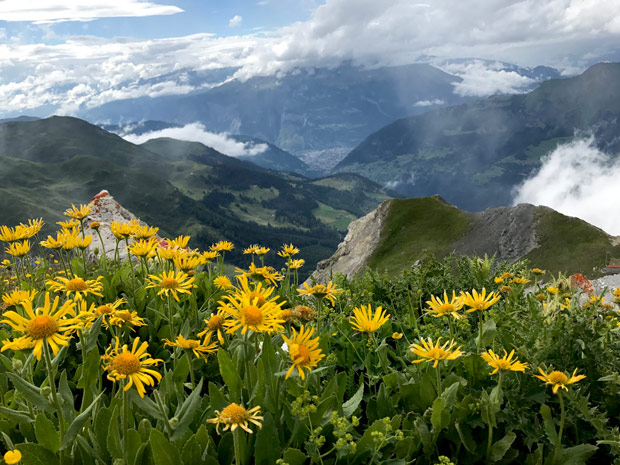 Located about 1,800m above sea level, Arosa offers a wide range of outdoor activities such as hiking in the summer and winter sports. Visitors should take a cable car to Weisshorn. A stunning view of mountain peaks and valleys down below is visible from the top. The air is fresh and the weather is cold and windy even in the summer. 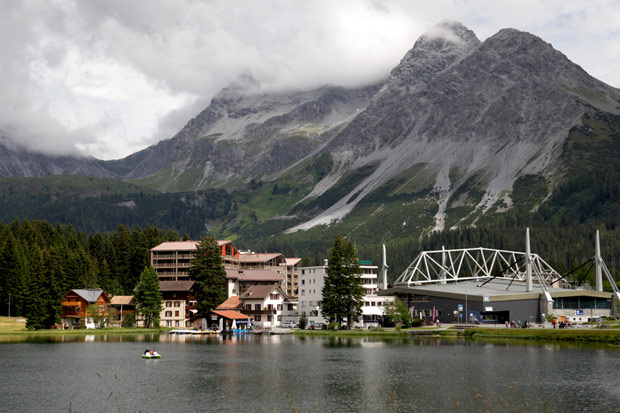 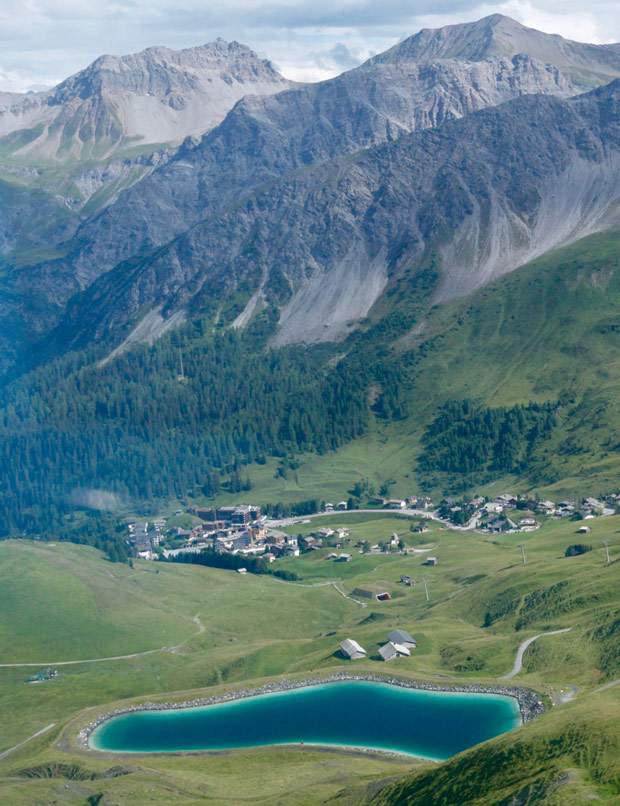 There is also a photo of a young King Rama IX on a balcony to let visitors see the position where he posed for the picture.

Between Lausanne and Arosa, there are at least two places worth visiting.

One is Aigle, the old city surrounded by hilly vineyards. The highlight is its 12th-century Castle of Aigle, which has been turned into a Vine and Wine Museum. Visitors can stop for lunch and wine tasting.

Zermatt is where visitors can take a train ride to Gornergrat viewpoint (3,089m above sea level) to get a panoramic view of the horn-shaped peak, Matterhorn (4,478m above sea level). Matterhorn is one of the famous mountains in the Swiss Alps and is the natural border between Switzerland and Italy.

The journey to Lausanne and Arosa provides an unforgettable experience of natural beauty filled with snow-capped mountains, pine forests, a calm lake and peace-loving people. 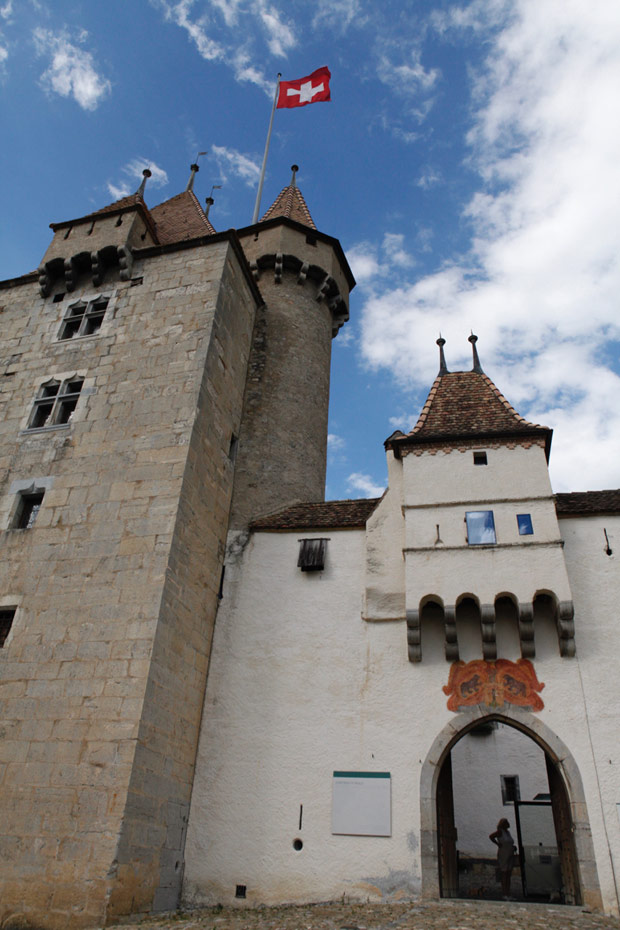 Chateau d’Aigle was built in the 12th century as a castle of the Barons of Aigle. It was used as the court and prison from 1804-1972 before being renovated as the Vine and Wine Museum in 1976. It houses more than 20 exhibition rooms, as well as function and event rooms. The museum houses a wide variety of wine presses, wine labels, old inn signs, equipment and tools in vineyards, as well as old murals. The museum also has a prison room and a torture room, which are not open to the public. 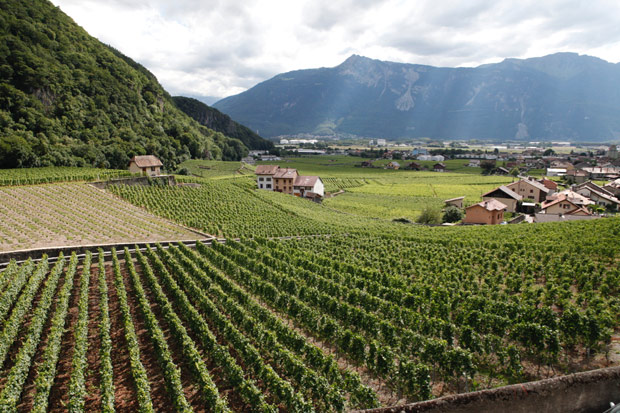 - Swiss Airlines (www.swiss.com/gb/en) flies daily direct flight from Bangkok to Zurich. The departure time from Bangkok is 1.05pm and the arrival time in Zurich is 7.35pm. The travel time is 11 hours and 30 minutes.

- An alternative is to fly Thai Airways (www.thaiairways.com). It departs from Bangkok at 1.05am and arrives Zurich at 7.50am.

- Travelling to other cities in Switzerland can be done via train. Visit www.swissrailways.com. 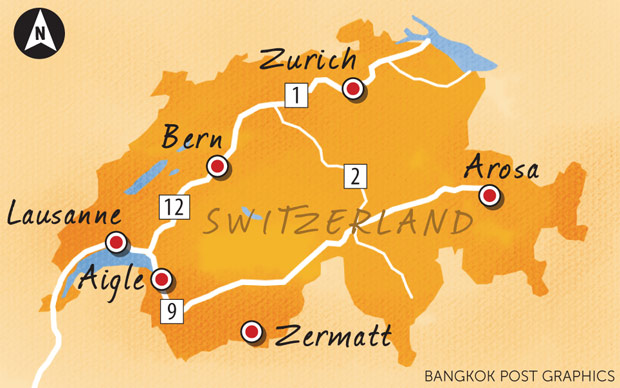