As the monsoons envelope Chiang Mai's mountains, it makes travel to the northern city sublime.

The cool season is always chaotic for Chiang Mai as the province turns into a mess with tourists flooding major attractions to feel the winter breeze. Yes, the weather is refreshing, but many times I find many destinations in Chiang Mai crowded during peak season.

The rainy season is also a nice chance to visit Chiang Mai when the forests wake up from the summer slumber and blanket the mountains with a refreshing green. Farmers are busy at work in open fields and rice sprouts fill the paddies. It is a lively time of year with less tourists.

The small loop in the southern part of Chiang Mai is a nice route to enjoy an easy drive -- from Chiang Mai International Airport, head south on highway 108.

The southern part of Chiang Mai is a far cry from the city. Highway 108 in Chom Thong is empty and driving is a breeze. Vast open spaces, shadows of rain clouds moving across lush mountains interrupted by the bright Sun and mountain views add colour to the trip.

From Hot district, I snake through a winding road that runs alongside the Mae Chaem River, which cuts into a rock mountain and forms a steep gorge known as Ob Luang in local dialect.

The Ob Luang National Park is a nice pit stop. A fierce stream from the Mae Chaem River runs through a rock valley where two big rocks on both sides almost touch each other, like they are trying to kiss each other.

Stunning views of the gorge, grass lawns by the stream and a walkway under tree canopies make it a good place for a picnic or camping. Among the trickles of a running stream, I stroll along the serene way, uphill to the kissing rocks to explore prehistorical cliff paintings on the mountain.

From the gorge, head north and find yourself among neat rows of mountain pines that distract travellers on the route.

Some people call it "Nami" as they find its scenery is similar to South Korea's famous Nami Island, a tiny isle where many a romantic movie has been filmed. 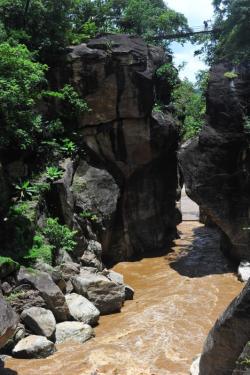 The steep gorge where two rocks on both banks of Mae Chaem appear to be kissing is the landmark of Ob Luang National Park. A narrow canyon makes Mae Chaem River run fierce and fast. On the mountain there are prehistoric cliff paintings which date back 2,500 to 3,000 years. Peerawat Jariyasombat

From the pine forest, my van snakes through a lonely road to visit the peaceful district of Mae Chaem.

Situated in a remote valley by Doi Inthanon, the country's highest peak, Mae Chaem is a quiet district. The vast majority of people are farmers. Difficult accessibility to Chiang Mai makes it a forgotten place. However, today it has become a popular destination for those who want to witness dreamlike terraced rice paddies.

During the rainy season, the entire valley turns green and lively. Farmers begin their jobs and gradually fill their terraced rice paddies with young plants. From August to late September, the district is full of visitors hopping around for the views.

A highlight of Mae Chaem's terraced rice paddies is Pa Bong Piang, a Karen village next to Doi Inthanon National Park. The ridge of paddies snakes along the slope, shaping hundreds of green contour lines. What makes the scenery in this lonely village special is the backdrop of colourful plantation slopes and the horizon filled up with countless mountains.

From Mae Chaem, it is a short drive to Doi Inthanon National Park. If you visit the mountain during the cool season, when the bustling park is too crowded, you may love it more in the monsoons. The monsoon weather is comfortable and not too cool, the forest is lush, with less crowds.

Hilltribes on Doi Inthanon farm rice on terraced paddies, as well. Besides the famous Mae Klang Luang, Ban Pha Mon is another Karen village with a great view. The village offers a tranquil homestay experience in a beautiful valley, watching local farmers at work or visiting ethnic cuisine workshops.

Though it is the period tourists ignore, you may love Chiang Mai more in the impressive green season. 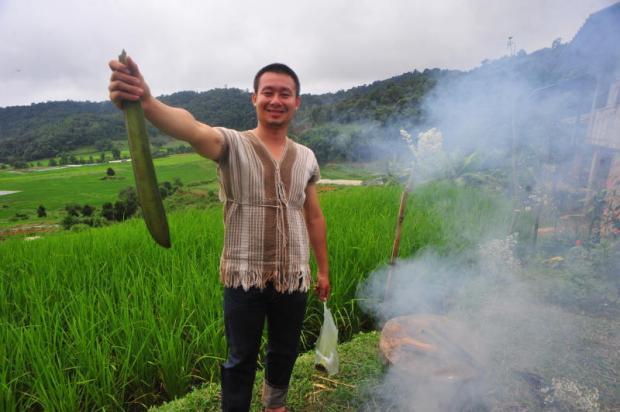 A traditional Karen homestay is offered by Pha Mon Village, which was established more than 130 years ago. Besides rice, villagers grow different temperate vegetables for the Royal Project. Trekking trips to explore the mountain and waterfalls can be arranged. Peerawat Jariyasombat 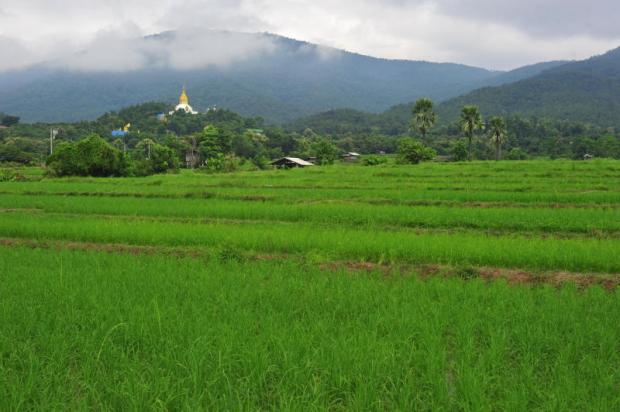 Situated at the foot of Doi Inthanon, Ban Mae Tia in Chom Thong district offers an excellent view of rice paddies hidden behind a vast longan plantation. The landmark of Ban Mae Tia is a Nepalese style stupa, which is a replica of the Boudhanath Stupa in Nepal. Peerawat Jariyasombat 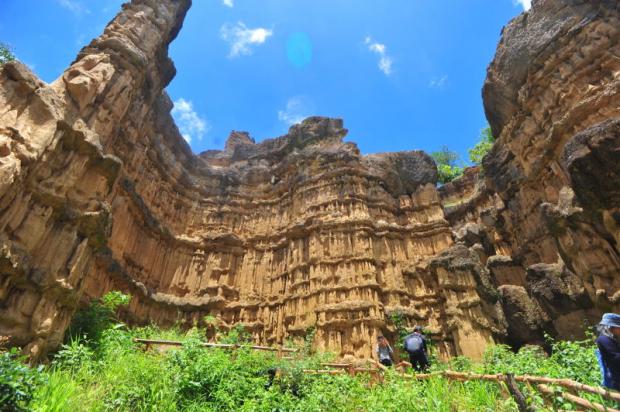 Situated in Mae Wang National Park in Doi Lo district, Pha Chor is a 30m-high cliff created by the uplift of the Earth's plate and erosion by wind and rain. Five million years ago, this area was a part of the Ping River, which has changed its course. Peerawat Jariyasombat 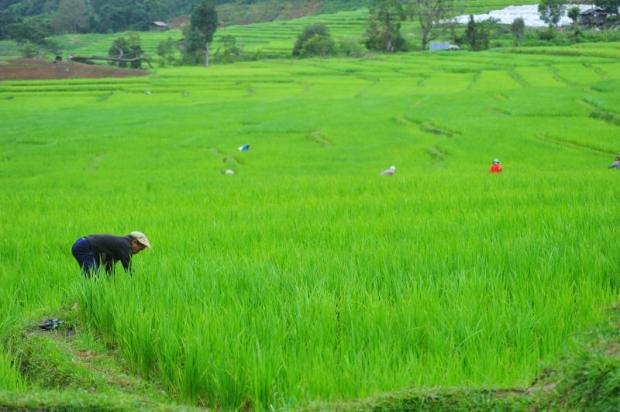 Mae Klang Luang village on Doi Inthanon is popular filming spot for many TV series and movies. If you are fond of coffee, the village offers very good organic Arabica. Peerawat Jariyasombat 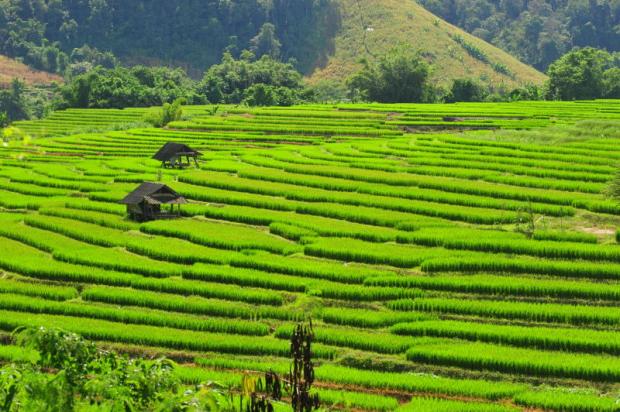 At the foot of Doi Inthanon, Mae Chaem district is serene. Besides the famous embroidered tubeskirts or pha sin, the district is famed for scenic terraced rice paddies. Mae Chaem is home to a number of impressive paddies and landscapes, namely Pa Bong Piang, Ban Mae Pan and Ban Kong Kan. PEERAWAT JARIYASOMBAT 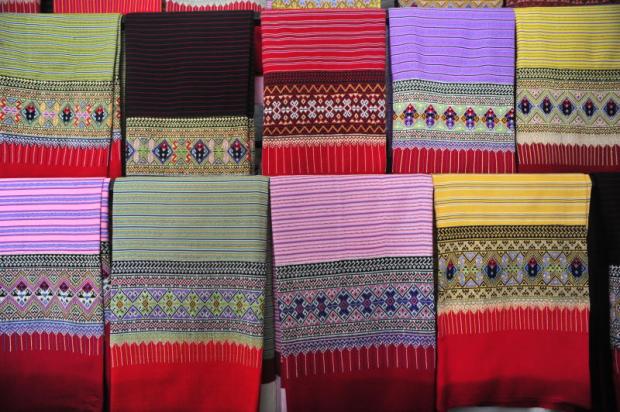 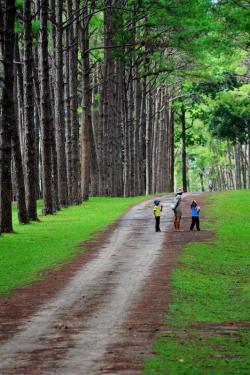 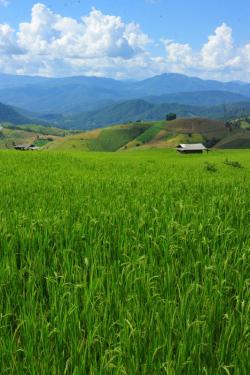 A terraced paddy field in Pa Bong Piang at the foot of Doi Inthanon Mountain. Pa Bong Piang is a Christian Karen village. Harvest is in October and the fields are an impressive gold. Peerawat Jariyasombat 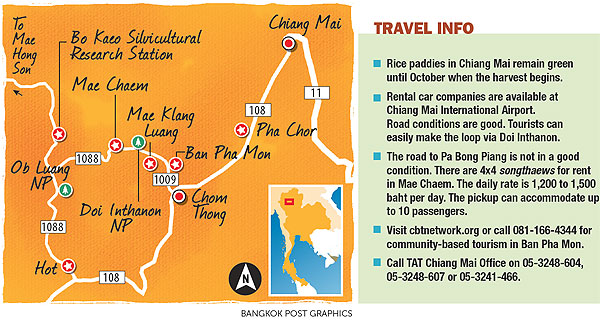