Mention Fukuoka and travellers to Japan are not sure if they should pay the city a visit. Compared to metropolitan Tokyo, enchanting Kyoto and lavender-infused Hokkaido, Fukuoka is lesser known.

The largest city on Kyushu island and the sixth largest in Japan, Fukuoka is definitely worth visiting. With a population of only 1.3 million -- the eighth most populous Japanese city, according to the World Population Review -- Fukuoka is not as crowded as Tokyo and visitors can still enjoy modern aspects of the Land of the Rising Sun.

Earlier this year, Fukuoka was ranked by London-based Monocle magazine as the 14th most liveable city in the world in its "Quality of Life Survey" for 2017. The first five spots are Tokyo, Vienna, Berlin, Munich and Melbourne. Last year, however, Fukuoka came in seventh.

Surprisingly, Fukuoka is the city with the second highest number of temples and shrines, after Kyoto in Japan. From 1274 to 1281, the city was involved in warfare when the Mongols led by Kublai Khan tried to invade Japan. During those years, feudal lords built many temples along the coast so soldiers could stay in the monasteries during wartime. The Mongol invasion eventually failed, thanks to samurai warriors who protected the country.

Set aside its historical, war-related importance, Fukuoka served as a port town -- a passageway to Dazaifu, the administrative centre of the entire island of Kyushu in 663. During this time, Japan started trading with China and Korea so there was an influx of people and culture from the two countries into Japan. It is said by locals, sometimes jokingly though, that the reason Fukuoka girls are more good-looking than those in other parts of Japan is because they inherited genes from foreigners.

Fukuoka is a small city with an area of around 340km² (it's a quarter the size of Bangkok, which is around 1,500km²). Due to the city's compact size, travellers will find it convenient to get around. The major means of public transportation in Fukuoka are buses and the subway. Travelling by subway is simple especially for foreign tourists given that signs are available in English. Buses can be quite complicated as travellers need to figure out the right bus number to destinations.

The major railway station in Fukuoka is Hakata Station. The largest railway station on Kyushu island, it serves as a gateway to other cities. Hakata Station can be pretty hectic as it connects the subway, Japan Rai and the Japanese bullet-train shinkansen. Visitors may travel from Hakata to Tokyo by shinkansen, which takes around five hours.

Fukuoka is a bicycle-friendly city, too. Two years ago, the city was ranked by The Guardian as one of the world's most bicycle-friendly cities. In Fukuoka, cyclists are banned from the roads but they are allowed to share pavements -- which are wide -- with pedestrians. So commuters walking on the footpath while cyclists criss-crossing them are a familiar sight. Bicycle parking spots are available all over the city.

In 2014, Nishinippon Shimbun, a local newspaper, reported that the number of foreign tourists visiting Fukuoka airport saw an almost 30% increase from the previous year. According to data provided by Fukuoka mayor Soichiro Takashima, in 2015 the city saw around 19 million tourists. More than 90% of the Fukuoka-bound foreign tourists are from Asia -- Korea, Taiwan and China.

Mayor Takashima's vision is to make Fukuoka a hub of Asian cultures. Every year the city organises the Asian Party, which comprises several activities with objectives not just to draw visitors but also to put Asian cultures in the global spotlight. Three main events in the Asian Party are the Asia International Film Festival Fukuoka, the Fukuoka Prize recognising people who contribute to safeguarding Asian cultures, and The Creators featuring lots of attractions including live performances by artists and a contest of stage and video works by creators from Fukuoka.

This small city has gained ground among Thai visitors too as seen from signs at some tourist destinations that are available also in Thai. This is in part thanks to THAI Airways International operating a direct flight to Fukuoka, which was inaugurated in 2013. 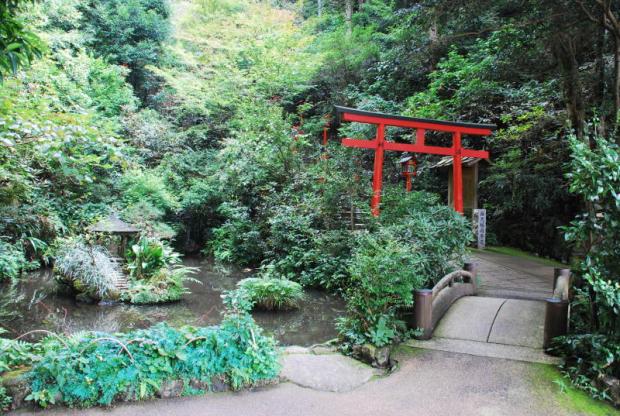 Nanzoin Temple is a large complex with many shrines scattering over the hillside. There are lots of statues inside the temple's compound, including 500 statues of the Buddha's disciples. Nanzoin is one of the 88 temples in the Sasaguri Pilgrimage route, which is Japan's most well-known pilgrimage.The environment in the premises of Nanzoin Temple is very verdant, full of big trees, ponds and small waterfalls. Arusa Pisuthipan 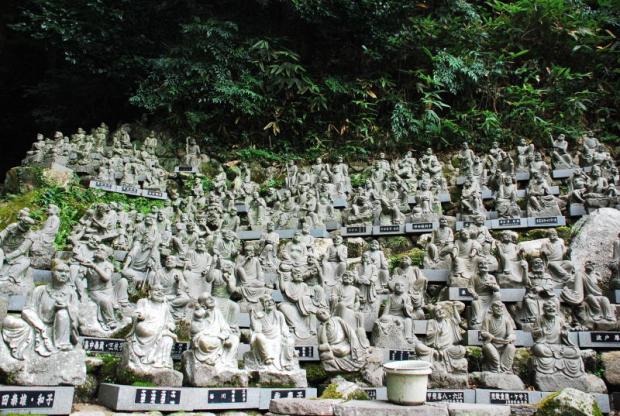 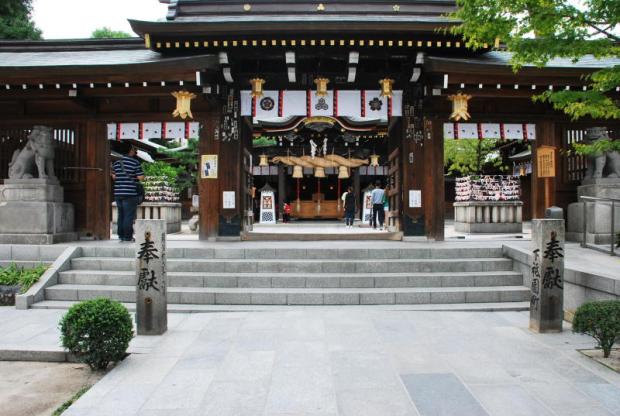 One of Fukuoka's oldest shrines, Kushida Shrine is regarded as the guardian shrine of the city. This Shinto shrine is also called "O-Kushida-san" by the locals who believe the Shinto god Okushida-sama resides here. The god is worshipped as a deity of business and trading.Kushida Shrine is the starting point of the July festival of Hakata Gion Yamakasa, which takes place annually in Fukuoka from July 1-15. The festival started 750 years ago. At the festival, teams of men race through the streets at full speed at the break of dawn while holding 1-tonne floats on their shoulders. The floats are elaborately decorated particularly for this festival. Each year, seven teams compete to be the fastest. The winning team is awarded with nothing but honour.A large number of foreign tourists visit Kushida Shrine each year. The Omikuji or fortune-telling paper strips are available in English, Korean, Mandarin and Hokkien — but not yet in Thai. Arusa Pisuthipan 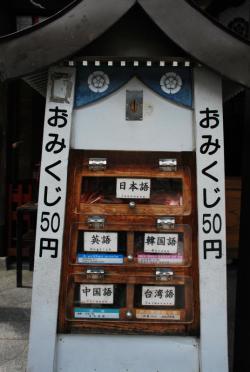 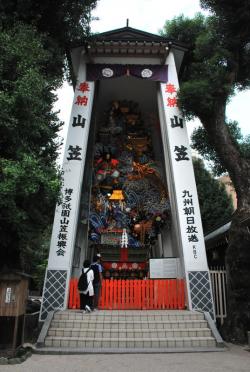 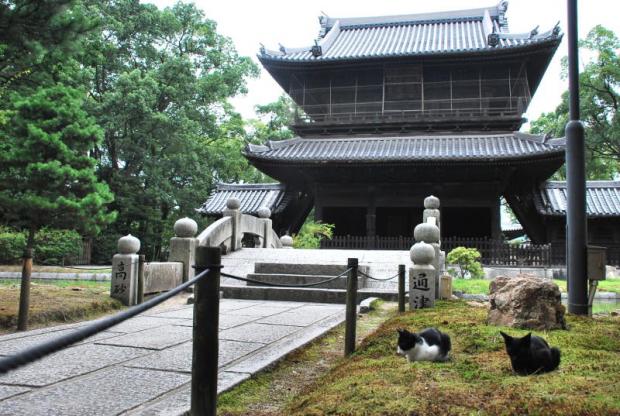 Shofukuji Temple is the first Zen temple in Japan established by high-ranking priest Eisai in 1195, who brought Zen Buddhism from China to Japan. This very peaceful temple comprises several wooden structures. Visitors are only allowed to stroll in the temple's compound but not enter the wooden buildings. This temple is believed to be one of those where green tea cultivation and consumption culture was initiated with Eisai introducing and bringing it from China. Local people, however, call this temple a cat paradise, given there are lots of cats staying at this monastery. Arusa Pisuthipan 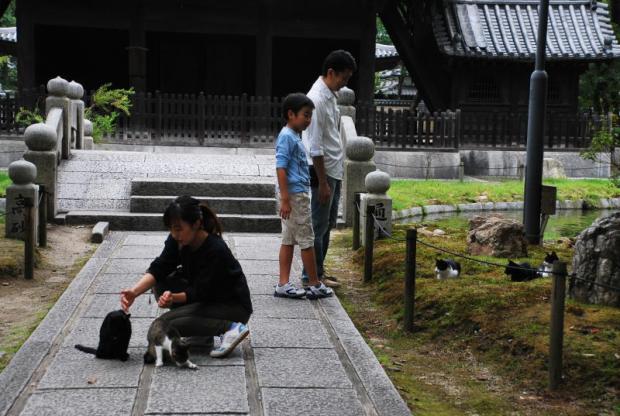 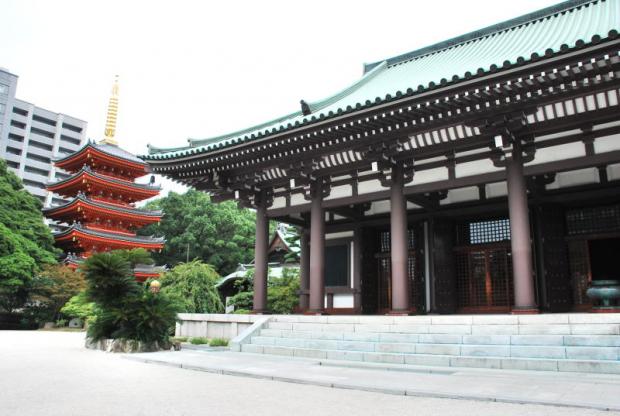 Built in the year 806, Tochouji Temple was founded by Shingon Buddhist monk Kobo Daishi Kukai. Mostly people come to Tochouji Temple for the 'Fukuoka Daibutsu' or the Great Buddha of Fukuoka — a huge wooden statue of a seated Buddha thought to be the biggest of its kind in Japan. This Buddha was finished in 1992 after four years of carving. The statue is 10.8m tall. Visitors are not allowed to take photos of the Great Buddha statue.Visitors can enter the inside of the Buddha statue's base, part of which is basically a walk through complete darkness. They have to proceed while holding onto the handrail until they see the light at the exit. This is thought to be the pilgrimage from hell to heaven.Next to Tochouji Temple is a shop famous for its rice crackers and green-tea ice-cream, which costs ¥194 (56 baht) apiece. A must-try. Arusa Pisuthipan 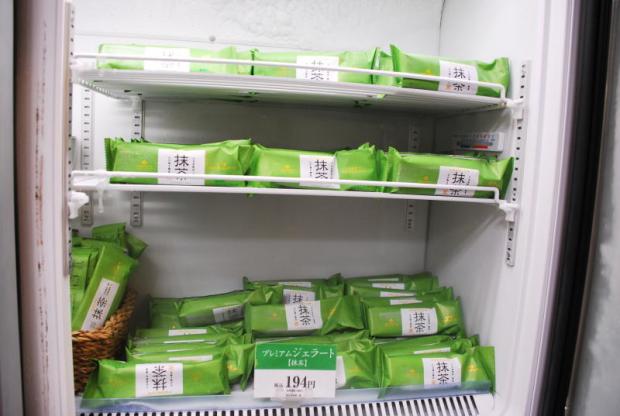 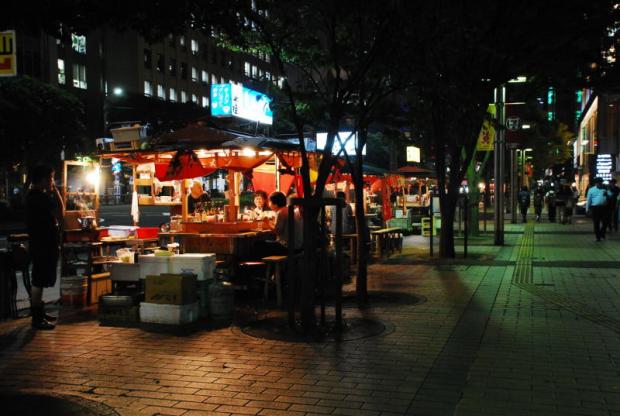 Open air food stands or yatai are unique to Fukuoka. Each yatai can accommodate around seven to eight people. There are more than 150 yatai across the city. Locals really enjoy eating at yatai especially on weekends where almost every one is seen fully seated.Yatai is where diners can eat local treats, quite similar to street-food experience in Thailand. For foreign visitors, it is a place where they can interact with the locals. Arusa Pisuthipan 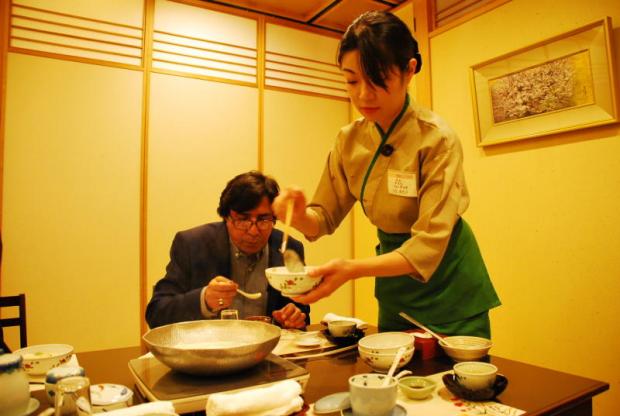 Fukuoka is well known for its tofu. Ume no Hana restaurant is one of the eateries that specialise in tofu-based dishes. Ume no Hana is translated into English as plum flowers.Among the highlights is tofu yuba hotpot featuring a soup of tofu sheets and vegetables, which are prepared right in front of diners. Desserts are also made from tofu. This place is a definite must-try even for non-vegetarians. Arusa Pisuthipan 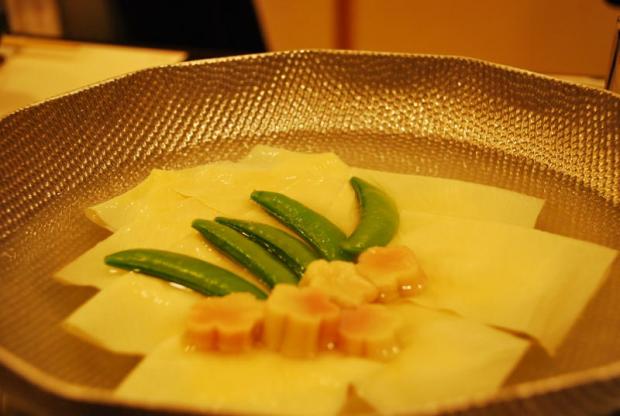 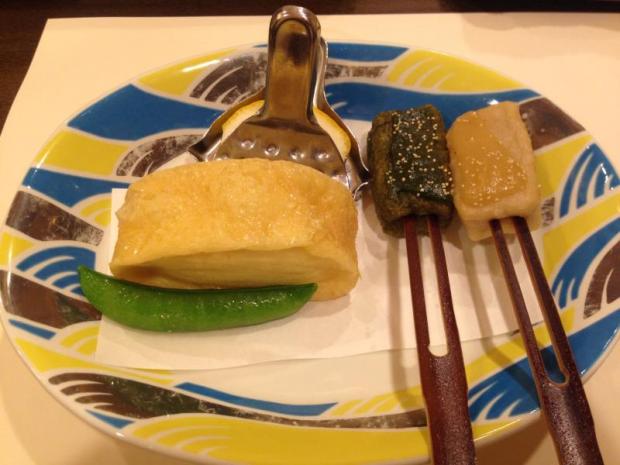 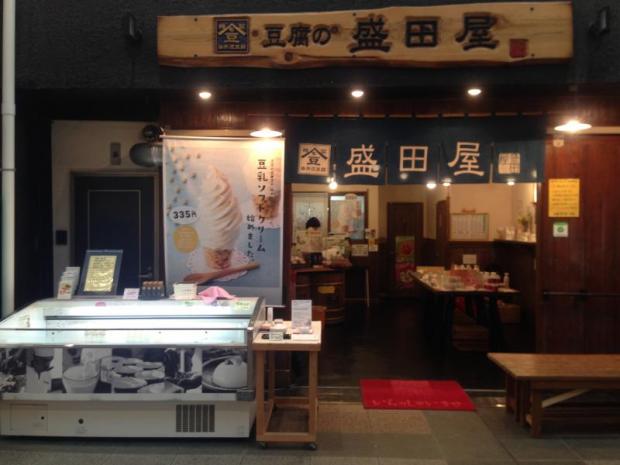 Hakata Kawabatadori is one of the city's oldest shopping streets. The area is lined with more than 100 shops selling various types of goods, from clothes and souvenirs to handkerchiefs, cosmetics, umbrellas, letter-writing sets, fruits and food. Famous here is a small shop selling tofu products such as facial masks, drinks and soft-serve ice cream. Arusa Pisuthipan 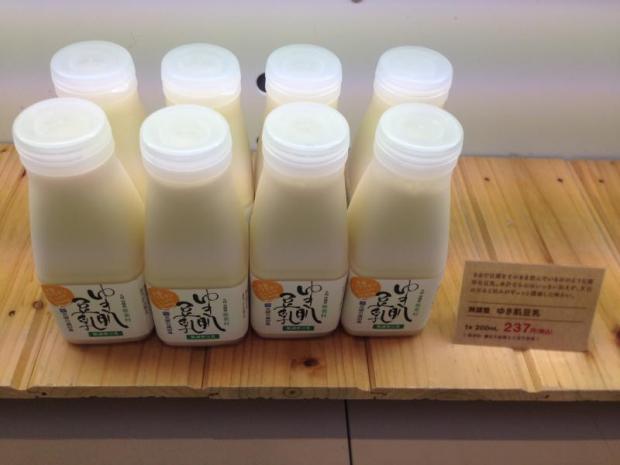 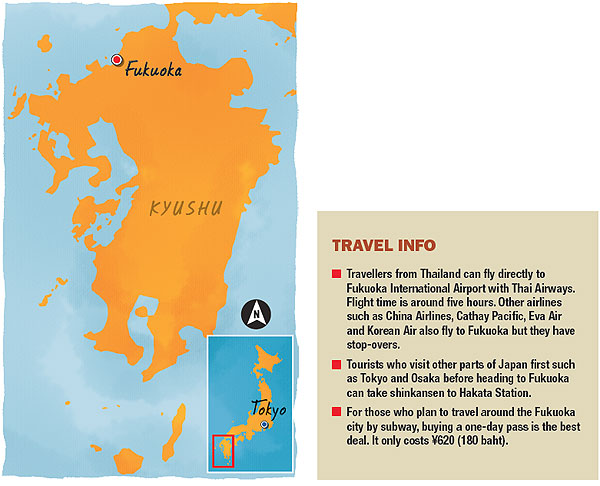