published : 21 Dec 2017 at 04:00
newspaper section: Life
writer: Pichaya Svasti
Phra Phuttha Angkhirot, the principal Buddha image of the ubosot at Wat Ratchabophit, was made of gold in the reign of King Rama V. The gold — weighing 2.7kg — used in moulding the statue had been melted from jewellery worn by King Rama V when he was a young prince. The statue is in the meditation posture and wearing a pleated saffron robe. Its lap is 1.5m wide. It was named after one of the previous Lord Buddhas, meaning there's an aura around the body. The base was made of marble imported from Italy. Inside the base are the remains of King Rama V, King Rama VII and his queen, and King Rama IX. Jetjaras Na Ranong

Apart from Wat Bowon Niwet, which is King Bhumibol Adulyadej's symbolic temple, Wat Ratchabophit on Ratchabophit Road is one of only two temples that enshrine his ashes. Since Nov 7, when the temple started permitting the general public to pay respects to the royal remains, many have flocked there for this purpose.

This temple holds historical and religious significance because it is the symbolic temple of King Rama V and King Rama VII, and has housed three supreme patriarchs, including the current one. It is also home to the royal cemetery for wives, children and descendants of King Rama V -- up to those holding the ranks of queens and chao fah only. According to royal tradition, the bones and ashes of kings must be kept in the bases of Buddha statues and in the Grand Palace only.

In the early Rattanakosin Period, the ashes of King Rama I, II, III and IV were floated onto the Chao Phraya River from the pier of either Wat Pathum Khongkha or Wat Yannawa. This tradition was abolished on the order of King Rama VI, who initiated the tradition of enshrining kings' ashes in the bases of Buddha statues at major royal temples.

Wat Ratchabophit was built from 1869-70, on the order of King Rama V, as the symbolic temple of his reign. The construction of the temple on a 10 rai plot was supervised by Prince Praditworakan, a skilled royal craftsman. This temple was beautifully designed and decorated.

The full name of this temple is Wat Ratchabophit Sathitmahasimaram Ratcha Wora Viharn. Ratchabophit means "built by a king", and sathitmahasimaram means "a royal temple with large sema stones". According to the Fine Arts Department's Historic Sites Survey Report, issued in 1995, this temple has large carved sema (religious demarcation) stones on stone pillars placed on the temple's outer walls in eight directions. 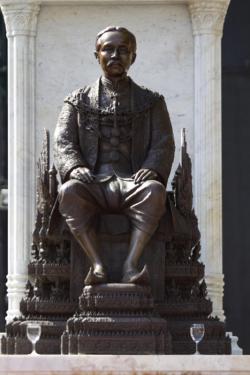 This temple is one of only three with a Maha Sima boundary. The others are Wat Ratchapradit Sathitmahasimaram and Wat Boromniwat. One of the special characteristics of the Maha Sima temples is that monks' religious activities are not performed only in the ordination hall (ubosot) but anywhere in the boundary of Maha Sima.

Stepping into the temple compound, visitors walk through the entrance with wooden door panels depicting Western-style soldiers. They see the boundary walls surrounding the Buddha's zone (Buddhawas) in the northern part of the temple. The walls are made of plastered bricks and decorated with glazed tiles designed by Acharn Daeng -- a famous artist from the reign of King Rama V -- and made to order in and imported from China.

A highlight of Wat Ratchabophit is its ubosot. It is traditional Thai architecture on the outside, but its interior is decorated in a mixed Thai and Western fashion. The doors and windows of the ubosot are decorated with mother-of-pearl Thai motifs and the likenesses of five major Thai royal decorations. They are among the most important art pieces from the Rattanakosin period.

Located south of the main pagoda, the prayer hall, or Phra Vihara, is in the same style as the ubosot. Yet there are a few differences. The door and window panels of Phra Vihara also depict royal decorations, but are only wood carvings without pearl-inlay works. The interior of the ubosot is in a blue tone, while that of the Vihara is in a pink shade. 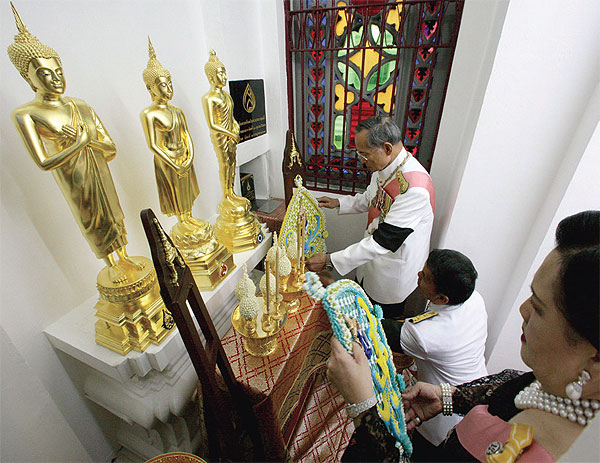 In the Vihara, Thai motifs are shown only on the connecting parts of the ceiling and window frames. The ceiling is in gold, but sports no patterns. The upper parts of the interior walls are painted pink and depict falling flowers. The lower parts feature the Thai number nine -- like the auspicious symbol unalom and the initial Jor, meaning King Rama V reigned as long as King Rama I. The principal Buddha image is in the posture of subduing the Mara and named Phra Pratheepwarothai.

Other must-sees at the temple include Koei (a platform for mounting royal vehicles), Phlubphla Phluang Khruang (a dressing pavilion), Arun Royal Mansion and Sitalaphirom Royal Mansion. Koei and Phlubphla Phluang Khruang are on the northeastern corner of the temple's fence. The pavilion on a plastered brick base is for a king to change his attire during his visit to this temple for the kathin (robe presentation) ceremony, as part of a royal procession. Its two-tiered roof is covered with glazed tiles and has a finial on its sloping edges. The gable depicts a royal guard unit's seal. The doors and windows are adorned with coloured mirror glass.

In all, Wat Ratchabophit is worth a visit. Its historical, artistic and religious significance is doubled by the existence of the remains of King Rama V, King Rama VII and his queen, and King Rama IX, as well as those of many other royals. This temple is also symbolic of the two kings who steered Siam towards great changes and development. 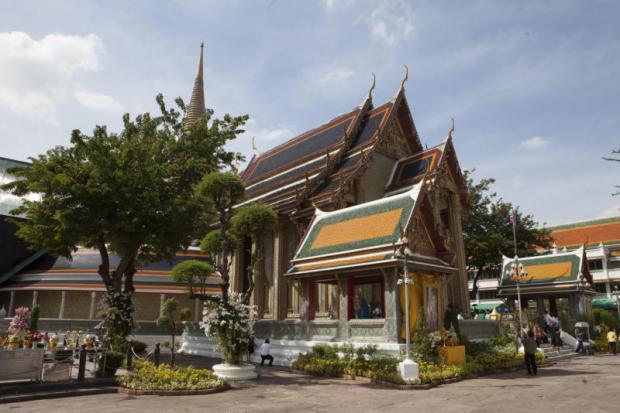 The ordination hall of Wat Ratchabophit is in traditional Thai style on the outside, but its interior is decorated with a mix of Thai, Romantic and Victorian styles, according to Vasu Poshyanandana, senior architect of the Fine Arts Department's Office of Architecture. The ubosot has a two-tiered roof. The front gable has a deck, finished with colourful glazed tiles. The gable depicts a seven-headed elephant that carries a gold-footed tray holding a Thai-style crown supported by royal umbrellas and the mystical animals ratchasi and khotchasi. The other gable portrays god Vishnu riding on the garuda. Jetjaras Na Ranong 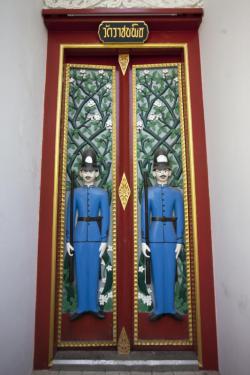 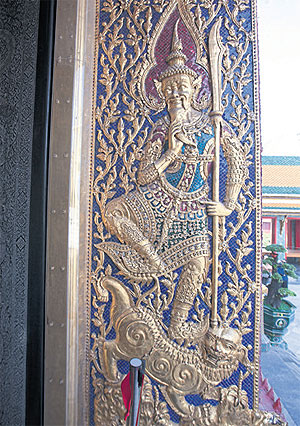 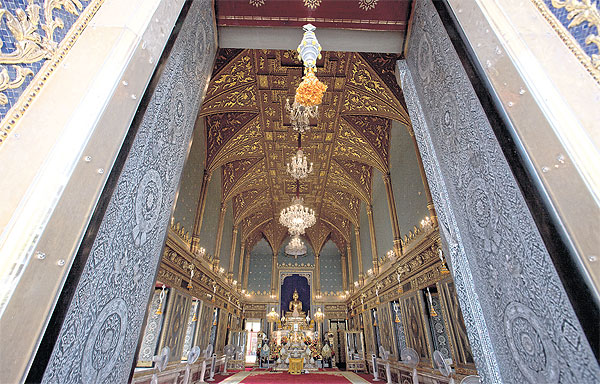 Inside the ubosot, the interior walls and ceiling feature Romantic and Victorian art, blending with traditional Thai floral motifs. Certain features are inspired by Gothic-style pointed arches, pilasters and friezes. Above the arch of the entrance is the reign mark of King Rama V in Western style. Between the windows are the auspicious symbol unalom and the initial Jor, which means King Rama V has reigned as long as King Rama I. The mother-of-pearl inlaid door panels depicting royal decorations are highlights. The inlay works were made by Prince Krommamuen Thiwakonwongprawat, chief of the Department of Mother of Pearl Works in the reign of King Rama V. According to the Association of Siamese Architects, the ceilings, columns and gilded walls are in the Rococo style, said to be similar to a hall in the Versailles Palace of France. The upper parts of the interior walls between the columns portray the life of the Lord Buddha, designed and painted by Mom Chao Prawit Chumsai. Later, King Rama VII had the original paintings removed and repainted with the falling-golden-flowers design, and added designs to the walls between column bases and behind the principal Buddha statue. 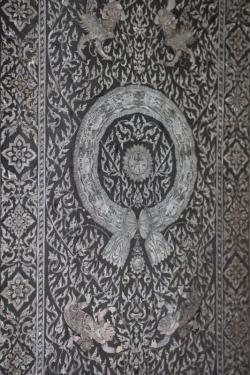 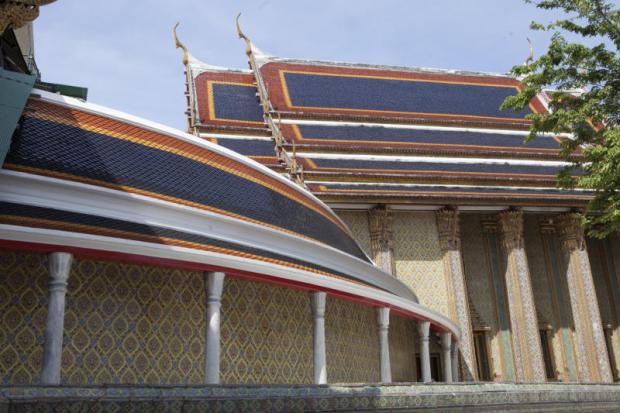 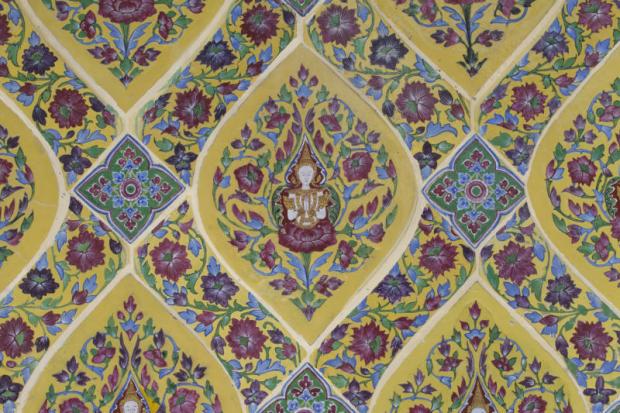 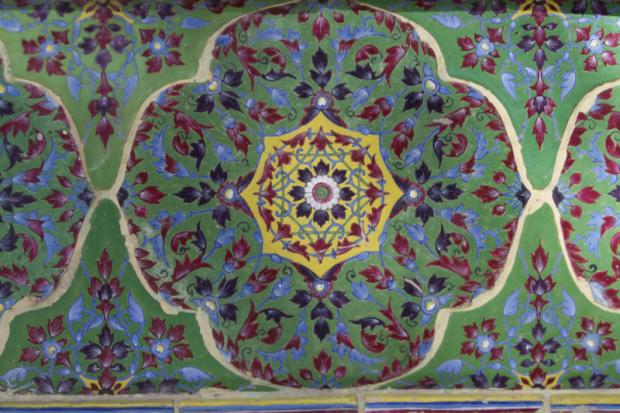 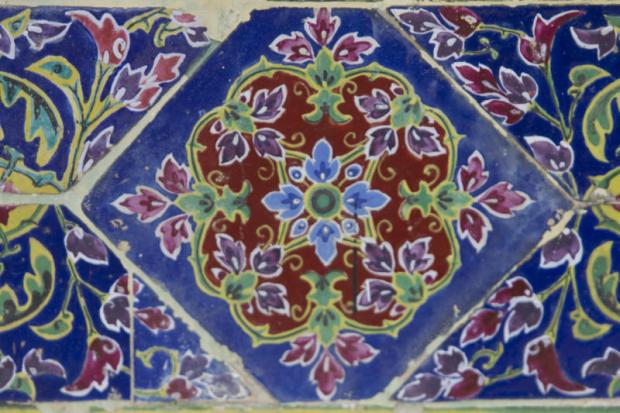 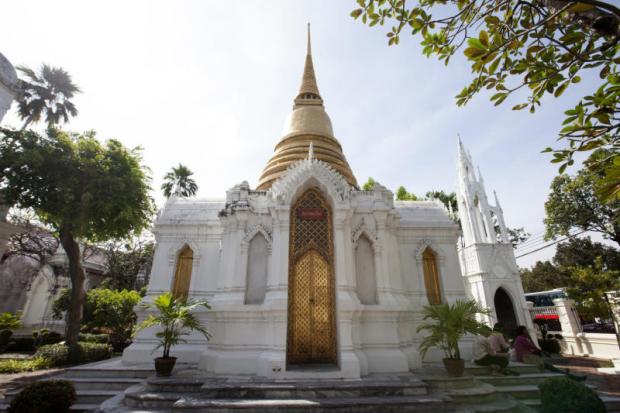 The royal cemetery boasts 34 monuments in memory of the wives, children and descendants of King Rama V. Some of the funeral monuments were built in Gothic and Renaissance styles. The four most important monuments are four gold-coloured stupas dedicated to four queens of King Rama V and their children and grandchildren. Standing from north to south are Sunandha-nusaowari for Queen Sunandha Kumariratana, Rangsi Vadhana for Queen Savang Vadhana, Saovabha Pradisathan for Queen Saovabha Phongsri and Sukhumal Naruemit for Queen Sukhumala Marasri. Chedi Rangsi Vadhana enshrines the remains of Queen Savang Vadhana (King Bhumibol's paternal grandmother) and all of her children, including Prince Mahidol of Songkla (King Bhumibol's father), as well as HRH Princess Srinagarindra (King Bhumibol's mother) and HRH Princess Galyani Vadhana (King Bhumibol's elder sister). 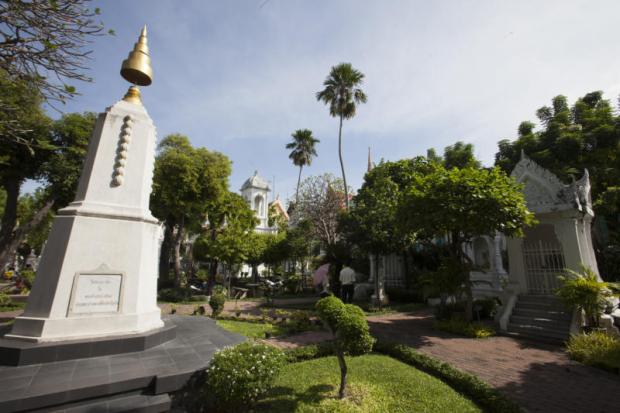 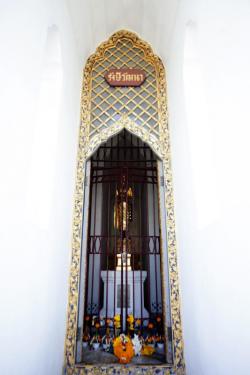 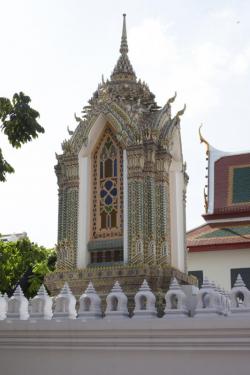 The temple's bell tower has two storeys. The first floor has brick walls and the upper floor consists of four arches. The top is in the shape of a Thai-style crown called Phra Kieo. The drum tower is in the same style as the bell tower, but decorated with coloured mirror glass. 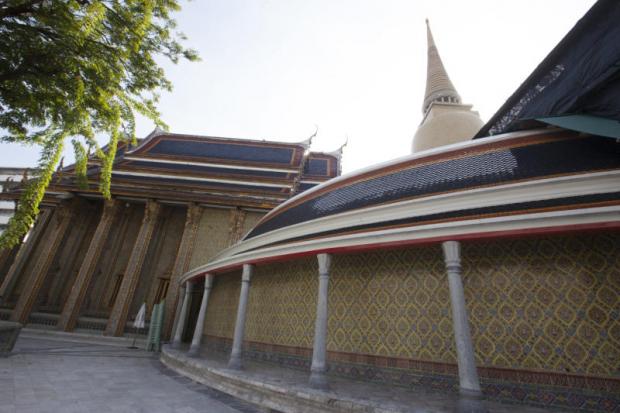 Located in the centre of the temple compound, Phra Chedi, or the main pagoda, is round and about 43m high. It is placed on a high base with coving corners, almost as tall as the roof level of the gallery. It is entirely finished with five-coloured (benjarong) glazed tiles and surrounded by 14 niches, which enshrine Buddha images, and a statue of Krom Luang Chinnawonsiriwat, a former supreme patriarch and temple abbot. The top of the pagoda enshrines 6,018 pieces of the Lord Buddha's relics. In a chamber in the middle of the stupa are two Buddha statues in the posture of meditation covered with the naga dating to the Khmer-influenced Lop Buri period in the 15th century. On the interior walls of the stupa are six other Buddha statues. The circular cloister (gallery) connects the ubosot to three other halls called Phra Vihara and Phra Vihara Thit (directional halls) in the eastern and western parts. It surrounds the main pagoda in its centre. The walls are finished with benjarong tiles. On the outside, there is a walkway made of marble. On the inside, there are two tiers of the floor. The outer columns are made of marble and the inner made of brick, with capitals decorated with gilded and coloured glass mosaics. 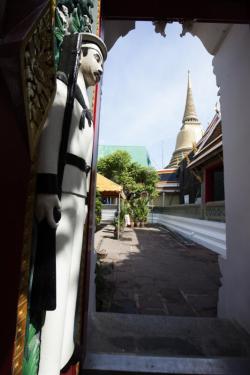 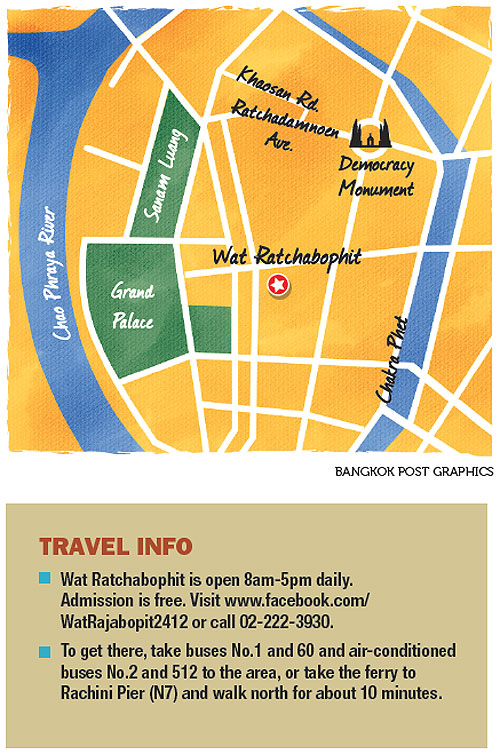