The Christmas Star Procession is a tradition unique to Sakon Nakhon and has been held annually since 1982. It reflects Christians' belief that Jesus Christ was born on a very starry night.

This year, the celebrations will be held at two venues: St Michael's Church until Christmas Eve and the Tha Rae-Nong Saeng Roman Catholic Church and Saint Joseph Sakon Nakhon School until Christmas Day.

On Saturday from 4.30-8pm, more than 20 festive parades with glittering stars will take to the streets from St Michael's Church to the Sala Matino community centre near Visetsilp Road.

Until Christmas Eve, visitors can enjoy paper star-making workshops, a food fair and the sale of New Year gifts in colonial-style buildings in the Tha Rae community.

On Christmas Eve, there will be a procession of locals carrying paper stars around St Michael's while a staged play and a mass prayer will begin at the church at 6.30pm.

On Christmas Day, 200 Christmas Star parades from churches in Sakon Nakhon, Nakhon Phanom, Mukdahan and Kalasin, along with more than 100 people dressed like Santa Claus, angels and Roman soldiers, will begin on the road in front of the government offices at 6pm, and head onto Sukkasem Road past Lan Khon Muang, Jai Phasuk Road and Sakon Rat School Intersection, stoping at St Joseph School at 7.30pm. After that, there will be a Christmas choir concert, food fair, performances and fireworks show.

From this month until the end of February, the annual Udon Thani floral festival "Blooming Red Water Lilies" in Nong Han, Kumphawapi, takes place at the 22,500 rai Nong Han lake.

Visitors can see thousands of red water lilies in full bloom in the morning from 6am to around noon. They can hire boats to see the flowers up close and enjoy the natural scenery.

Besides the "Sea of Red Water Lilies", Udon Thani is well-known for its archaeology and Unesco Heritage site Ban Chiang, the centre of Bronze Age civilisation dating to more than 5,000 years ago.

A run in Chiang Mai

The start and finish point is the Tha Pae Gate in the city centre. The route takes runners along city roads past local temples and the city moat with Doi Suthep as a backdrop.

The contest consists of a marathon, half-marathon, mini-marathon, fun run and kids' run. The marathon will begin at 4am, the half-marathon at 5am, the mini-marathon (10km) at 6am, and the Smile Run and Kids Run (3km) at 7am. Last year's event saw 11,000 people from 53 countries. 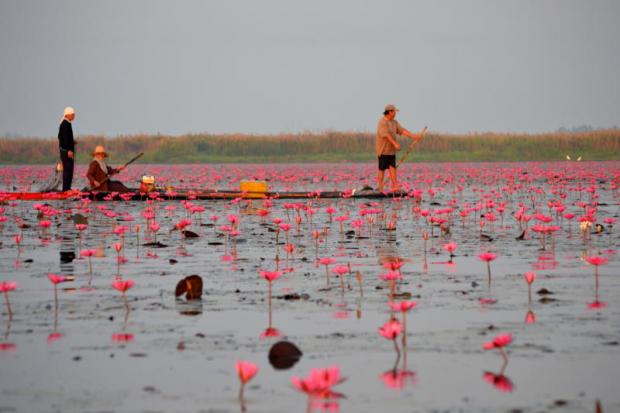