It was a sunny morning when we left Pokhara, spending 90 minutes in a van before reaching the village of Nayapul where we would begin the longest trek any of us novices had ever attempted.

Our sight was set on Poon Hill, a hill in central Nepal which -- at 3,210m above sea level -- offers a great sunrise view over the Annapurna massif. It generally takes about two days -- six-seven hours a day -- plus an hour predawn walk to reach the top of the famous hill, starting from Nayapul.

"Poon Hill is especially famous for first-time trekkers," said Madan, a Pokhara native who was our guide for this trip. "It's recommended that trekkers try out Poon Hill first as the altitude is quite OK. Then, if they like it, they can go to the Annapurna Base Camp [ABC, 4,130m in altitude] or even the Everest Base Camp [EBC, 5,364m]."

Our party of nine adventurous souls arrived in Nepal two days earlier. We spent a night each in Kathmandu and Pokhara to get accustomed to a new country, and to get ourselves ready for the four-day trek.

The first day of our hike was a warm up on a relatively flat surface. In the afternoon, we began to climb the stony steps to the village of Tikhedhunga (1,540m above sea level). The distance and whereabouts of places on the mountain were often described with the altitude and the time it would take to reach it. So, it was quite unclear how many kilometres we ended up walking, though it was estimated that we walked about 9km on our first day.

Being on the trek reduced our lifestyle to just the bare necessities. Our guest house that evening came with the simplest of bedrooms -- with nothing but a bed, a pillow and a blanket. And there was one shower, toilet and basin to share among roughly 20 of the guest house's occupants. It cost about 300 rupee (100 baht) a night per person. If anyone needed a hot shower, Wi-Fi, drinking water or even to charge a phone, they could pay extra (about 100 rupee for each additional service).

"Can I plug in my hairdryer?" One of my fellow trekkers asked. And the answer was no. Our guide said it could potentially cause a power shortage. The locals get their electricity from solar panels and micro-hydro power. The electricity comes limited, and it is also shut down during daytime to save power for the evening.

While the general living conditions up there were far from five-star, Madan did say it was as comfortable as it could get. This accommodation -- owned and operated by the locals -- has only been popping up along the trail for the past 30-to-40 years after the trek to Poon Hill (and further to ABC) became more popular. Before that, trekkers needed to carry their own tent and food.

With nothing much to do at night-time, we played dominoes and board games after dinner. Then, we enjoyed the night-time sky and its abundance of stars. Bed time came, and we passed out from exhaustion.

The second day of the trek was claimed by our guide to be the most difficult part of our road to Poon Hill. We left Tikhedhunga at 7.20am, with our destination being the village of Ghorepani (2,874m) -- our last stop before the predawn climb up Poon Hill. We'd be conquering the steep stony steps to ascend over 1.3km in altitude in a single day on foot.

"After this, it's gonna be easy," said Madan. Then, as an afterthought, he added, "Well, not too easy". 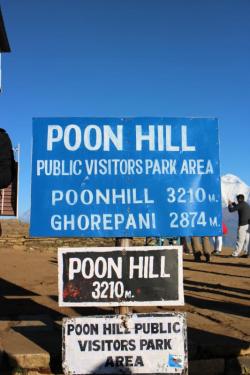 It did get very tiring with countless steps to climb. At the same time, it was easy to be distracted from sore muscles by the breathtaking view -- with terraced rice fields, creeks and valleys surrounding us.

However, unlike our aching feet, one aspect that wasn't as easy to ignore was the random plastic bottles and candy wrappers lying along the path. While the area was not completely littered, it was still an eyesore to see even a small, stray work of selfish people among the gorgeous vista.

Concerning the waste management uphill, Madan said that garbage had to be collected and brought down from the mountain for proper disposal. To limit the amount of plastic waste, the locals refrained from selling bottled water as we ascended higher up the trail, and instead offered to refill our existing bottles for 80-100 rupee a litre. However, they still sell bottled soft drinks. At 3.40pm, we reached Ghorepani. By that time, some of us were starting to feel the effects of thin air and the resulting acute altitude sickness. We got noticeably more tired with each step we took, and some said they felt dizzy and slightly nauseous.

Outside the hotel's window, beyond the power pole and someone's roof, we got our first real glimpse of the Himalayas before it disappeared into the mist of clouds.

For dinner, we had a flaming piece of steak, and it was marvellous.

At 5am sharp the next day, we met outside the hotel in our winter gear. The sky was dark, but there were already a few hundred figures with bobbing flashlights walking around. We all followed the same path towards the foot of Poon Hill where we began our final ascent to the top.

I think Madan was wrong when he said that the walk from Tikhedhunga to Ghorepani was the hardest. Personally, this final 50 minutes of walk up Poon Hill was perhaps the most challenging of all. At over 3,000m above sea level, the low oxygen took a toll on our bodies. We took even more breaks. Our pace slowed. Fifty minutes sure felt a lot longer. At 5.50am, we reached the top, wasting no time in finding the best spot to watch the sunrise. Our energy was miraculously replenished. And when the cloud dispersed, when the snow-capped peak of the Annapurna South was slowly kissed by the first ray of sunlight, illuminating it with a golden halo, everything else -- the sore muscles and the cold (the temperature was reportedly 6C) -- melted away. We were filled with euphoria. All over the hill, a loud cheer erupted.

I wish I could somehow capture the moment perfectly into words and photos. But as anyone who has been to Poon Hill would tell you, nothing could capture that panorama of snow-capped Himalayas rising over the sea of mist like actually being there and experiencing it yourself.

We spent over an hour up there basking in the moment, trying to capture as many memories as we could. We took hundreds of photos, while some phones mysteriously shut down (perhaps due to the cold).

Too soon, we found ourselves bidding Poon Hill farewell. And the rest of the walk that brought us down from the mountain passed by in a blur. We had our breakfast, packed our bags and left the hotel. The beauty of the Annapurna massif accompanied us throughout the day. On the path, we encountered a group of trekkers blasting Take Me Home, Country Roads on their stereo, and the catchy tune sure stuck. I found myself humming the song as we continued our journey to Tadapani (2,630m), where we spent our final night on the mountain.

We finally completed our four-day adventure on foot the following day when we took a jeep back to Pokhara, ending the arduous yet joyful journey that would stay with us for a long time.

That night, we unwound at a bar next to our hotel, trying out hookah and local beers. Reflecting on the journey, we found Nepal growing on us.

The country offered us both highs and lows -- from the crazy traffic and dusty streets of its big cities, to breathtaking nature, exotic food and friendly souls.

Our party of nine, starting as strangers and now good friends, have since made a pact to come back to Nepal together, planning to head all the way to EBC next time around. 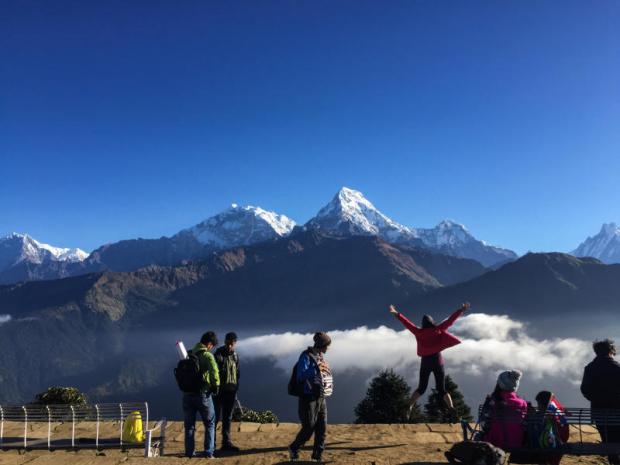 A view from the top of Poon Hill, Nepal. Melalin Mahavongtrakul 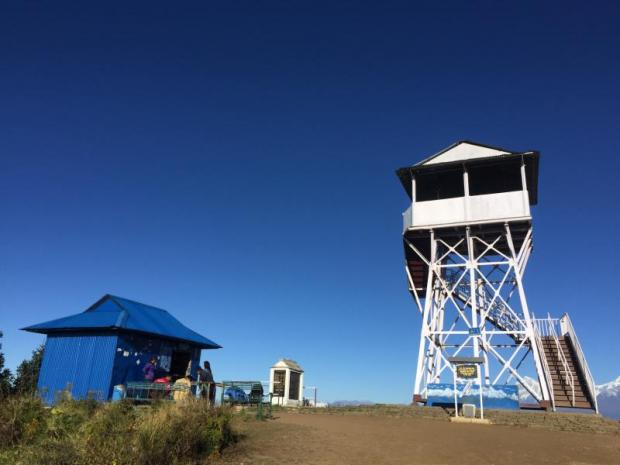 The top of Poon Hill comes with an observation tower that visitors can climb for a good view of the hill itself and a panorama of the Himalayas. There is also a stall selling hot drinks and light snacks if anyone needs to replenish their energy from the predawn walk. Melalin Mahavongtrakul 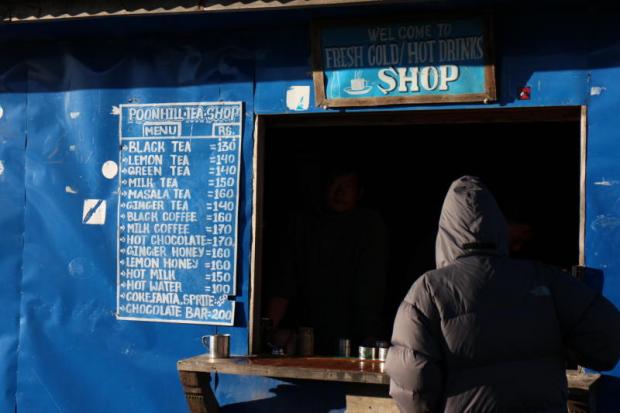 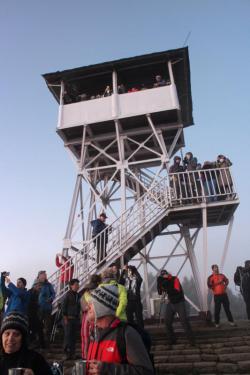 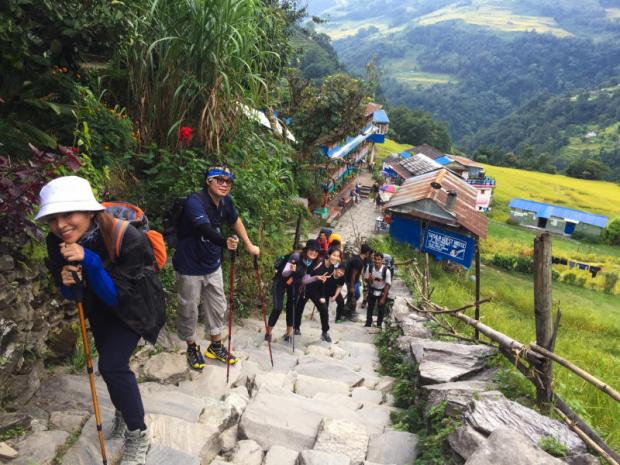 Poon Hill makes for a moderate trek suitable for all trekkers. A road well-trodden, there's no area that's particularly risky, though some steps can be slippery near the creeks and waterfalls. Perhaps the only thing trekkers would need to be aware of are the animals. Along the way, we encountered a pack of mules and rams sharing the same road. It's advisable to let the animals go first. Melalin Mahavongtrakul 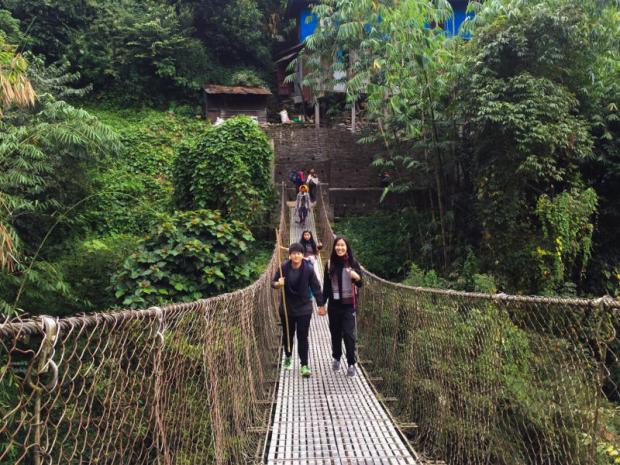 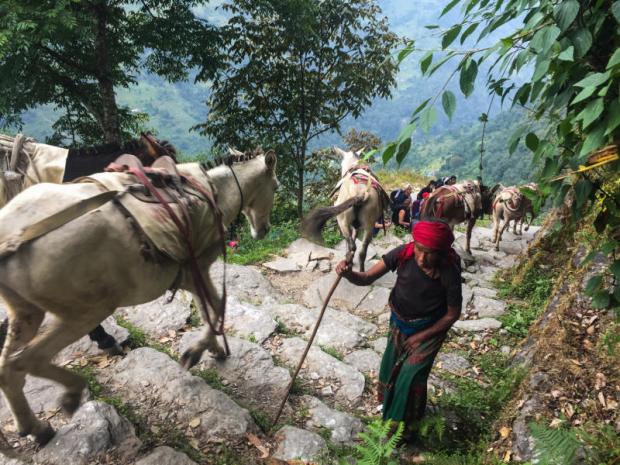 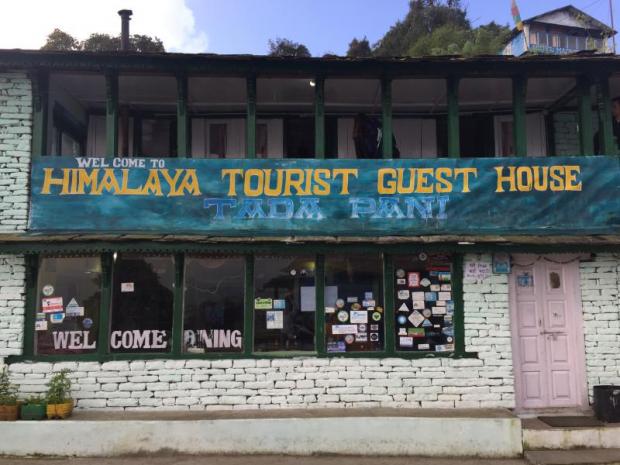 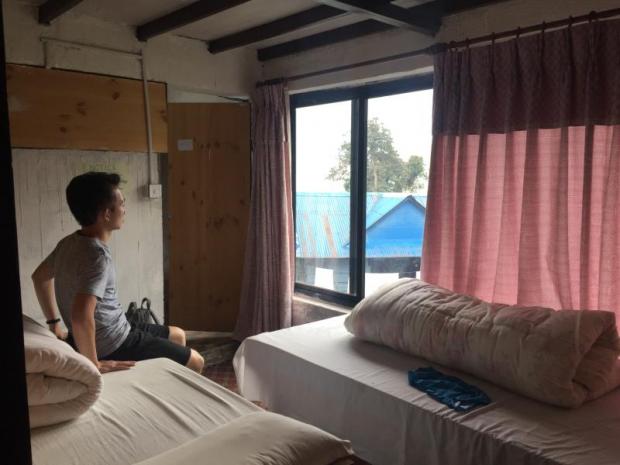 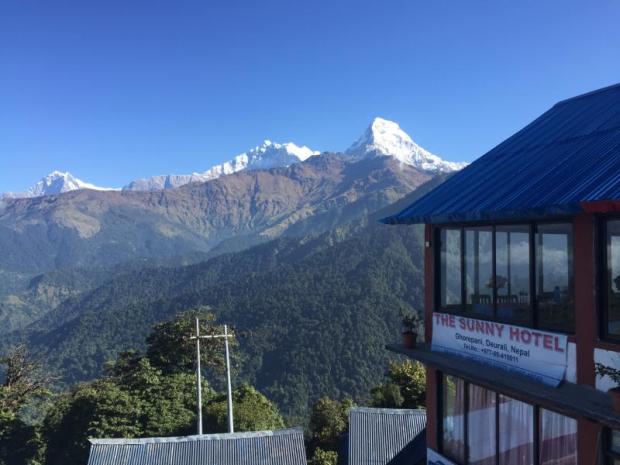 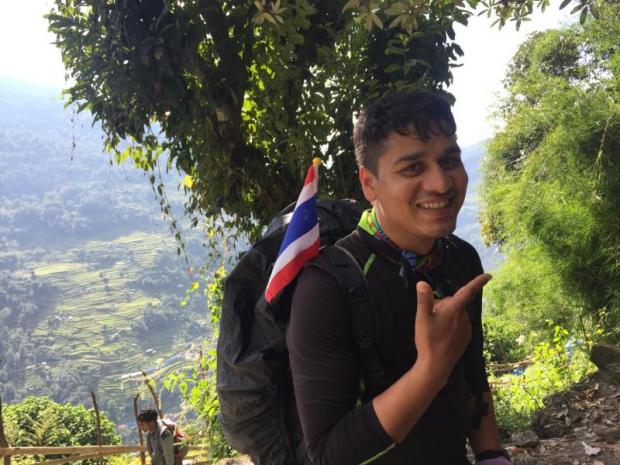 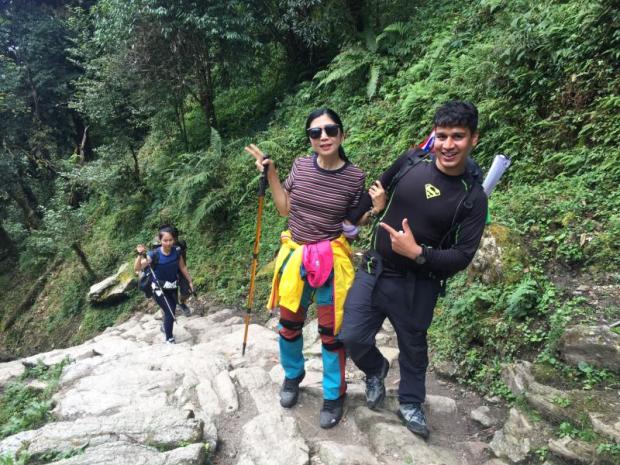 A local guide and porter are a great source of information for anyone wishing to learn more about Nepalese culture and lifestyle. And while the road to Poon Hill is very safe, it is still recommended that all trekkers are accompanied by a guide as the villagers don't speak much English. There's also no signal up the hill. There are unaccompanied tourists getting lost along the trail every year, according to our guide, and some are never found again. Melalin Mahavongtrakul 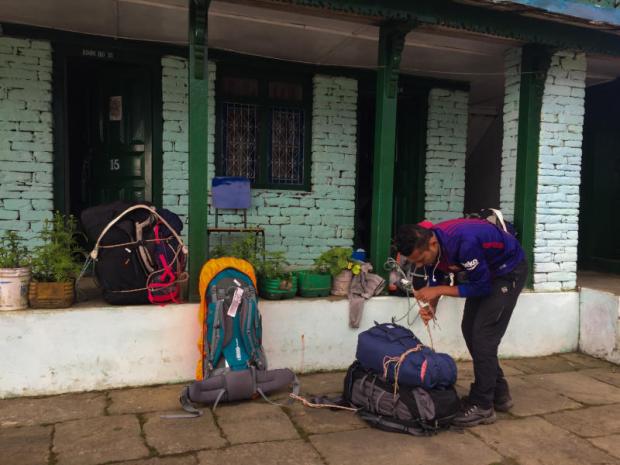 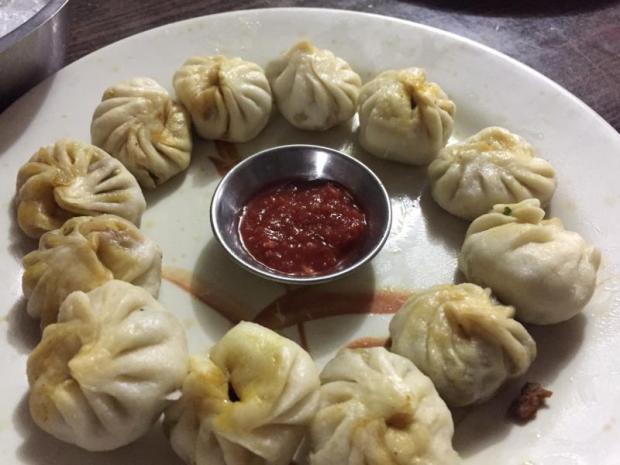 Nepalese cuisine — with influences from Tibet, India and other Asian cultures — is comprised of spices, herbs, lentils, rice, vegetables and meat. Try a plate of dal bhat, which features steamed rice, lentil soup, chicken curry, vegetables and pickles. Our guide and porters all said this is their source of energy for the trek (there's even a T-shirt with "Dal Bhat Power 24-Hour" print selling in Pokhara). And you can't miss momo, the Tibetan-style steamed dumpling with fillings such as chicken, buffalo, cheese, potato and vegetables. For a hot drink, try masala tea (spiced tea). Still, fret not if you're not a fan of exotic food. There are fried rice and noodles, omelettes, bread, muesli (served with hot milk) and more available at all of the accommodation leading to Poon Hill. Bring a small bottle of soy sauce. It can add a lot of flavour to your fried rice and eggs. Melalin Mahavongtrakul 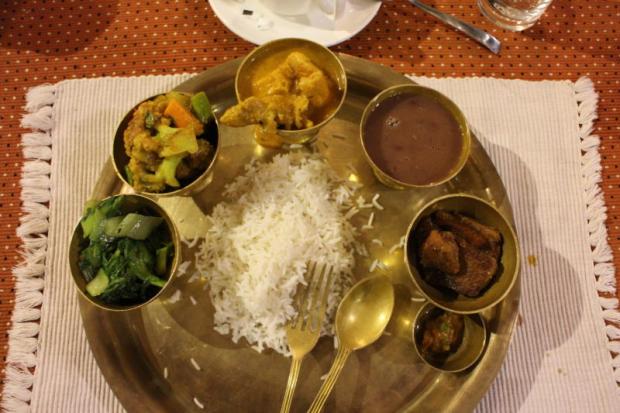 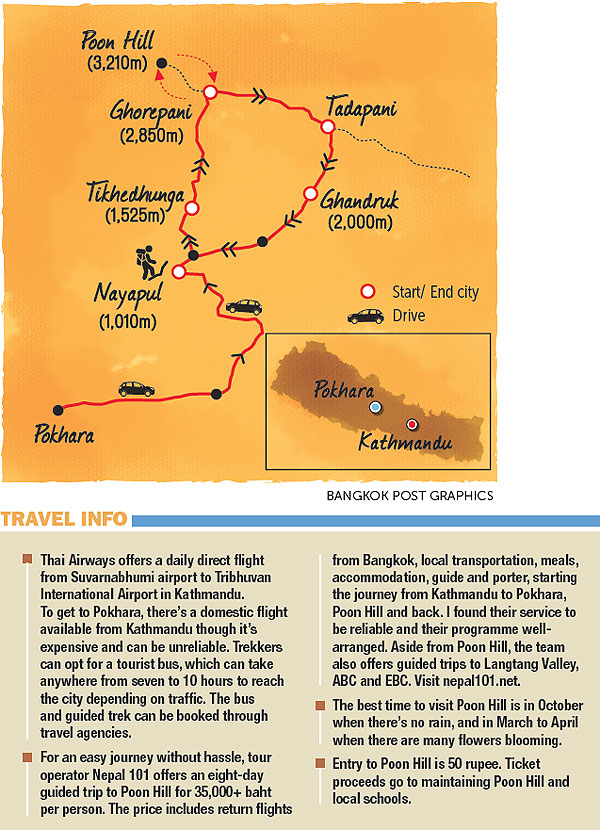