With exceptionally light traffic and lovely weather, Bangkok was wonderful for biking during the recent long holiday weekend. Instead of joining the mass in the exodus out of the capital, on New Year's Eve my friends and I opted to hang around and explore the city on two wheels.

Our target area was the middle section of Bangkok's old town, the Rattanakosin Island which is so-called because it is surrounded by the Chao Phraya River and three parallel canals, each of which, as you can see in the accompanying map, connect to the river at both ends.

The canal closest to the Grand Palace is called the Khlong Khu Muang Doem. Dug during the Thon Buri Period before Bangkok was established as the capital, it marks the boundary of the inner Rattanakosin Island. The next waterway further east is the Khlong Rop Krung (also known by other names in the different areas it runs through such as Khlong Bang Lamphu and Khlong Ong-ang). Excavated during the reign of King Rama I, it served as the moat for the new city. The outermost canal of the three is Khlong Phadung Krung Kasem which did not come into existence until the times of King Rama IV. 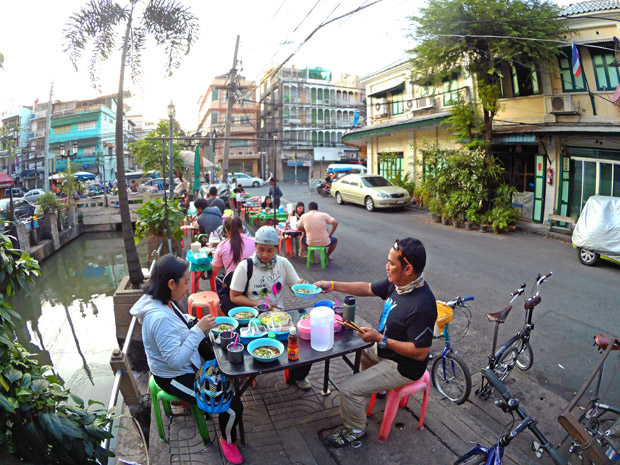 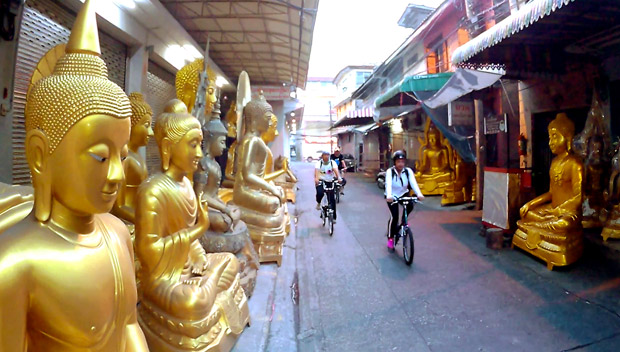 To make it easy to get the picture of the middle section of Rattanakosin Island, which lies between the two older canals, let's further divide the area into three parts -- the upper zone north of the Ratcha Damnoen Klang avenue, the mid-zone between the avenue and Charoen Krung road, and the lower zone south of Charoen Krung.

We started our ride in the upper zone from Wat Chana Songkhram where we parked the pickup. Skipping the backpackers' area of Khao San road nearby, we emerged through the temple's back door onto Soi Rambutri and a smaller lane which led to Phra Athit Road. At the corner where Phra Athit and Phra Sumen roads connect stands Phra Sumen Fort, one of the only two forts of the Rattanakosin Island that still remain. Behind the fort is the northern end of Khlong Rop Krung, which meets the Chao Phraya River just a stone's throw away. 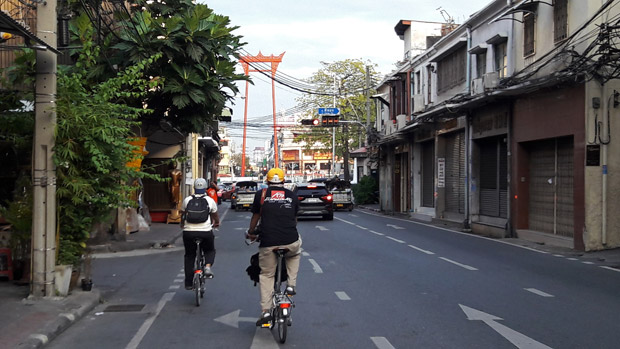 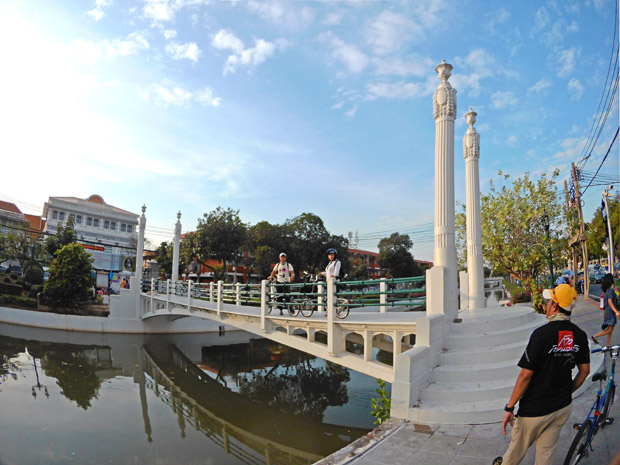 The fort is flanked by Bang Lamphu Museum, one of the many in this part of the city, and the Suan Santi Chai Prakan, a small park on the riverside.

From the park, we biked along the promenade to the Somdet Phra Pin Klao Bridge not far downstream. Before the bridge was constructed (1971-1973), the site was a point where Khlong Khu Muang Doem connects with the Chao Phraya. It didn't take us long to cover the north ends of the two canals that mark the eastern and western boundaries of the middle section of Rattanakosin Island.

From the Somdet Phra Pin Klao bridge, we followed its namesake road to the Phan Phiphop Lila Bridge north of Sanam Luang. There, the remainder of Khlong Khu Muang Doem is well preserved. Both sides of the canal, all the way to its southern end at Pak Khlong Talat, the famous flower market, are lined with beautiful buildings of various styles and sizes, from temples and ministries to shophouses and more bridges with design influences from the West. We dropped by at Wat Rat Bophit to pay respect to the royal ashes of King Bhumibol Adulyadej. Later, after zigzagging through the roads and sois and checking out many interesting sites within the confinement of the two canals, we also paid a visit to Wat Bowon Nivet, the other temple where King Bhumibol's ashes are enshrined. Along the way, of course, we made many stops to enjoy the ubiquitous street food. 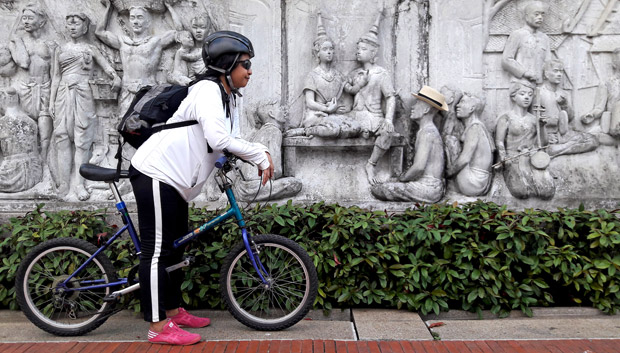 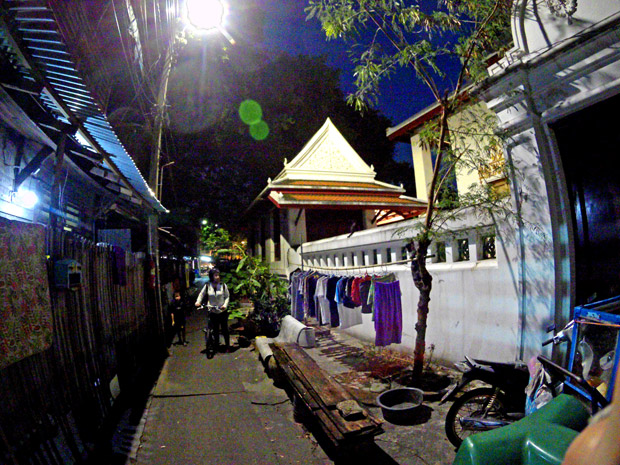 To be frank, even though we had limited our ride to within the middle section of the Rattanakosin Island, we managed to cover only a fraction of the area in one afternoon. On the next long holiday, the Chinese New Year in mid-February, we'll probably do it one more time.

Trail condition: Roads and narrow lanes.
Distance: Up to you.
Getting there: The Rattanakosin Island is one of Bangkok's top tourist areas. It can be easily accessed by public transportation.
Parking: Apart from Wat Chana Songkhram, several other temples in the area also have parking lots.
Food & drinks: There are so many street food vendors and restaurants available, you may spend more time eating than actually biking.
What your family can enjoy while waiting: Explore the area on foot.
Accommodation: Rattanakosin Island boasts a large number of hotels and hostels. 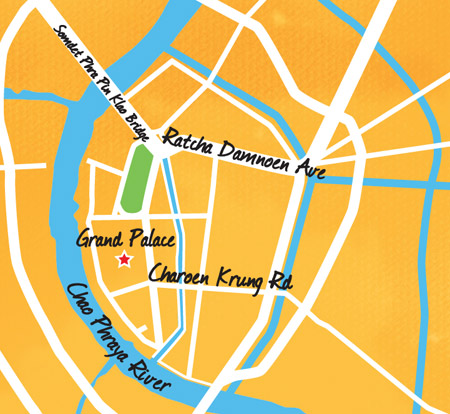 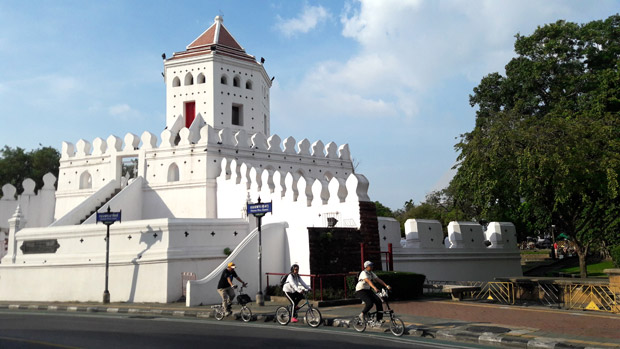