A garden in the city
Travel

A garden in the city

A short drive from Taipei City, Yang Ming Shan National Park is a backyard garden for the city dwellers.

At the park there's a sound like a gas leak. And it may be a huge gas leak, as the sound can be heard hundreds of metres away.

The sound echoes in the valley. Backlit white grass flowers dance when gusts of wind blow through the mountain, bringing a strong smell of sulphur in the air.

A few years ago, I visited this mountain on a very cold and foggy day. The visibility was down to metres. But today, I can see what makes the sounds. Fierce fumaroles are emitting white gas and smoke that rise high in the air, before blending with the breeze above among a scenic view of surrounding mountains.

"The volcanic activities here have been staying quiet since some 5,000 years ago. So do not worry about the eruption now. Just stay away from the geysers. They are very very hot," a park ranger warns when I am about to pass the bubbling area.

This area is called Xiaoguanyin. It is famed for the roaring fumaroles, sulphur crystals and impressive landslide terrain formed by post-volcanic activities.

With careful steps, I avoid the small geysers and look for a scenic spot for a photo opportunity. Under the bright blue sky, Yang Ming Shan is pretty beautiful. Such a view makes it hard to believe that this park is an easy drive away from Taipei.

From the car park, I trek uphill through the bamboo forest to stand over a hill. When I look back, I am stunned with a panoramic view of the lava terrace landscape. White grass flowers wave on the grassland while gas leak-like sounds fill the air.

Situated north of Taipei City, Yang Ming Shan is a scenic place. It is very convenient for city dwellers to visit. From the city, it takes less than an hour's drive to reach the park. So it is also called the garden of Taipei. 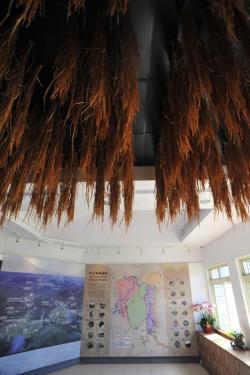 The agricultural centre features the story of Japonica rice farming in the area. Peerawat Jariyasombat

The national park covers an area of more than 114m² area featuring different landscapes, interesting flora and fauna as well as numerous hot springs widely found in the park, from an elevation of 200m to 1,100m above sea level.

I take a coach, which makes its way through a winding leafy lane into the valley below. Like most parts of Taiwan, Japanese influence remains in this area. We can find the black pines, acacia trees and Formosan gum trees, which were planted by the Japanese during the occupation period. This makes the mountain popular among Japanese tourists.

This valley was the first place where the Japanese successfully grew Japonica rice in Taiwan, in 1926, after many failures across the island.

Agriculture in Yang Ming Shan can be dated back a bit over 200 years. Before the Han Chinese came in 1804, people settled here and developed irrigation and farms.

Another main attraction is Yangming Shu Wu or the Zhongxing Guesthouse. Built in 1969 to serve as a place where Chiang Kai-shek, Taiwan's late president, received guests from overseas, and a summer residence for him as well. Now, the house opens for public visits.

The gigantic house is well-hidden in a large lush garden. It comprises a number of living rooms and study rooms which keep a number of pictures and documents about the late president. What I like most is the Chinese-style garden in the backyard that offers a very peaceful atmosphere.

The whole national park is an amazing place for an easy day trip. Moreover, it is a short drive from the bustling city. 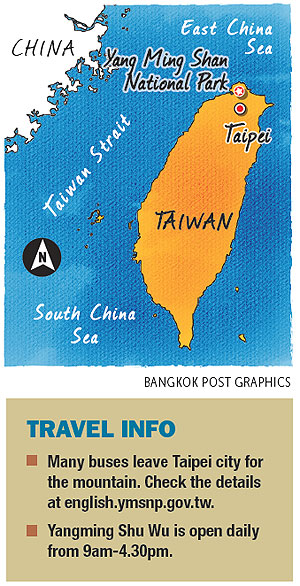