Bangkok by the sea
Travel

Bangkok by the sea

Bang Khun Thian, only about 50km from the city centre, is a pleasant day trip away from the bustle

If tourists have only a day to spend in the Thai capital and want to relax by the sea, Bang Khun Thian is a nice choice. Bang Khun Thian is a Bangkok district of which a certain part of its shoreline forms part of the Gulf of Thailand. You can enjoy a boat ride, see a mangrove forest along Phitthayalongkorn Canal, visit shrimp and blood cockle farms, and savour tasty yet cheap seafood at a homestay.

Even those who do not drive or do not want to hire a car or van can get to Bang Khun Thian conveniently. You can take a passenger bus to Central Rama II department store and catch a songthaew to the 15km-long Bang Khun Thian Chai Thalay Road and get off at Klong Phitthayalongkorn School at the end of the road. The school is home to a mangrove ecology and marine farming learning centre and also provides teacher and student guides to lead tourists on tours and learn about the area.

This primary school blends King Bhumibol Adulyadej's sufficiency economy principles well in its curriculum by focusing on outdoor activities for its students to learn about nature and their community from observing the mangrove, local plants and marine farming and cooking food from local vegetables, such as sea blite leaves (bai chakhram in Thai). In addition, it allows outsiders to visit its learning centre, rent its bikes and ride to the nearby mangrove natural trail route and nearby areas, and also provides accommodation for school camping upon request.

The 1.7km-long mangrove study route is about 2km away from the school. Visitors can stroll on a wooden walkway on the route and enjoy the natural beauty around them. No bicycles and motorcycles are allowed on the path.

This mangrove reflects biodiversity. Unfortunately, it has been under threat from human encroachment and soil erosion (by about 7m a year). Mangrove forests in Bang Khun Thian have declined in size from 2,735 rai to about 200 rai. However, the Bangkok Metropolitan Administration and local villagers try their best to protect the remaining mangroves by building dykes to curb soil erosion and to grow trees for 3,000 rai of reforestation. You can also hire boats at either Wat Pracha Bamrung Pier or Klong Pitthayalongkorn School Pier to travel on Klong Phitthayalongkorn and further to the sea. You will see more mangrove forests, local houses and fishing boats.

Highlights are the 28th post that demarcates Bangkok and Samut Prakan in the east and the 29th Post that marks the boundaries of Bangkok and Samut Sakhon to the south and west. These posts are about 5km away from each other. They were previously installed on land, but soil was eroded by waves and the land became part of the sea.

In addition, you can experience the local way of life by visiting tiger shrimp, clam and crab farms in the area and buy fresh seafood from local fishermen.

If you want to enjoy delicious yet inexpensive seafood, you can make reservations for lunch at Uncle Sorn Home Stay in the nearby Ban Saen Tor Community. There, you can try catching blood cockles which are being raised naturally in the owner's previous shrimp farm, and eat home-cooked seafood. Famous dishes there include half-boiled blood clams with spicy seafood dipping sauce, grilled shrimp and crab, and bai chakhram fried with egg.

At the end of the day, those having spare time may want to spend a night at any of homestays at Ban Saen Tor so that they will be able to explore more of Bang Khun Thian, which is home to the sea of Bangkok. 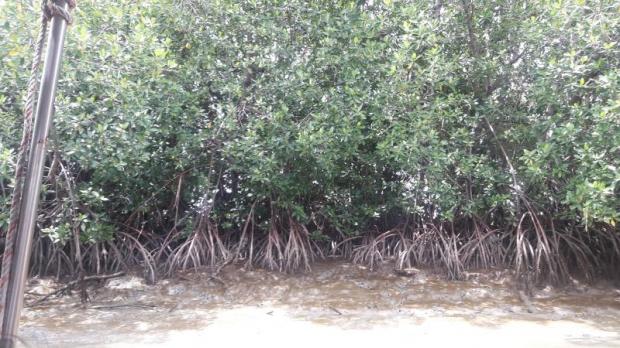 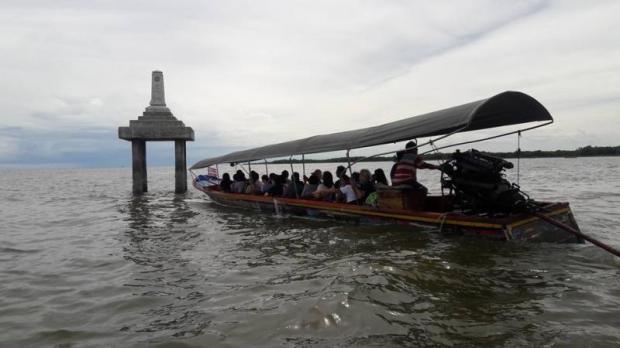 One of the demarcation posts in the sea. Photo courtesy of Thai Tourism Society 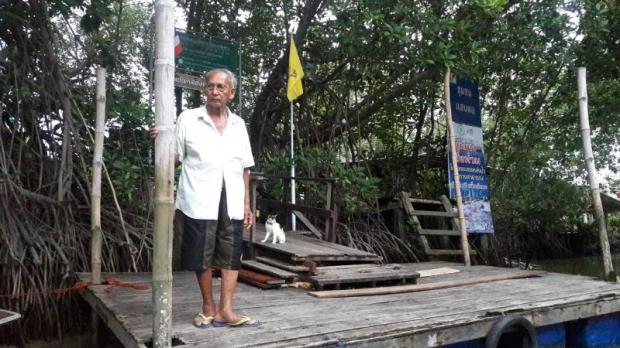 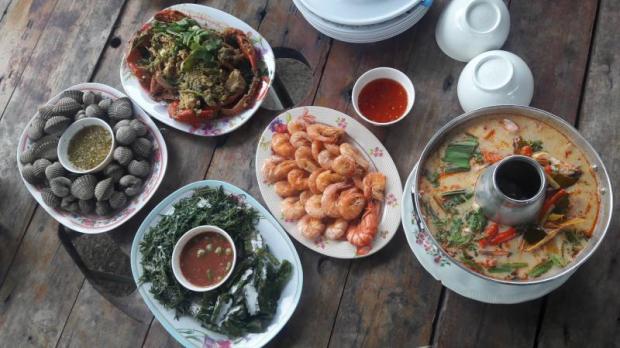