Come for the food, stay for the art
Travel

Come for the food, stay for the art

The sea of skyscrapers is a familiar scene when you travel to Hong Kong. Numerous choices of delicious Cantonese food, a shopping paradise and well-known theme parks may trigger you to return to the vibrant island in the South China Sea. 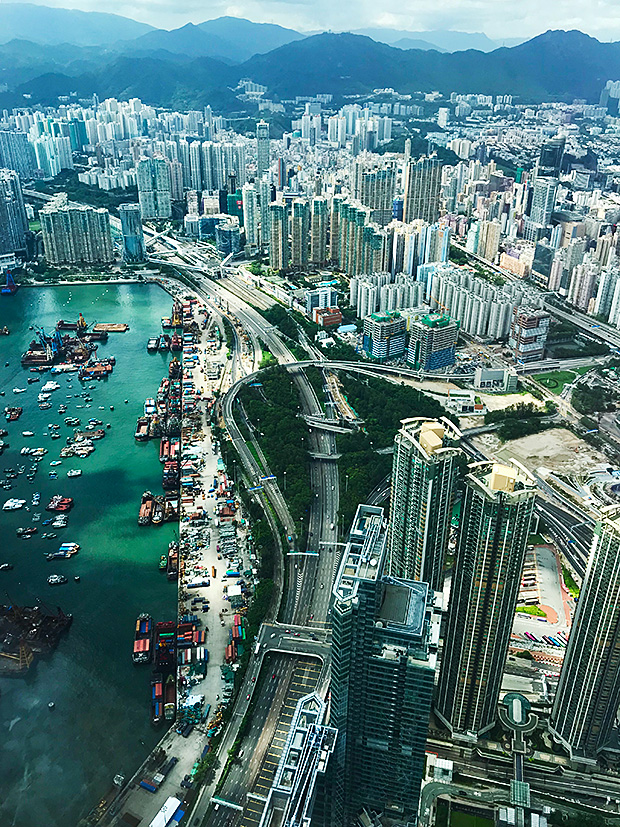 A bird's-eye view of Hong Kong is taken from the Ritz-Carlton Hotel, located on the top floors of the International Commerce Centre, the tallest building in Hong Kong at 484m. The hotel has a rooftop bar on its 118th floor and restaurants on 102nd floor where you can have panoramic city view and also bustling waterfront scene of Victoria Harbour. An alternative is to go to the building's observation deck (sky100.com.hk) with an entrance fee on the 100th floor.

During my recent trip to Hong Kong, I found that the contemporary art scene provides another reason to lure me back to this popular destination.

Hong Kong has numerous art galleries. It also has organised Art Basel -- the largest international art fair in Asia held annually during the past decade. Being known as the art hub of Asia, the island does not stop its expansion in the creative world. During the first half of this year, two high-profile art spaces opened. One notable site is Tai Kwun -- Centre for Heritage and Arts, while the other is H Queen's, a private mall for art galleries.

Tai Kwun officially opened on May 29. It is the centre of contemporary art for both local and international artists

Located in the heart of the Central district, the centre was renovated from the former central police station compound. 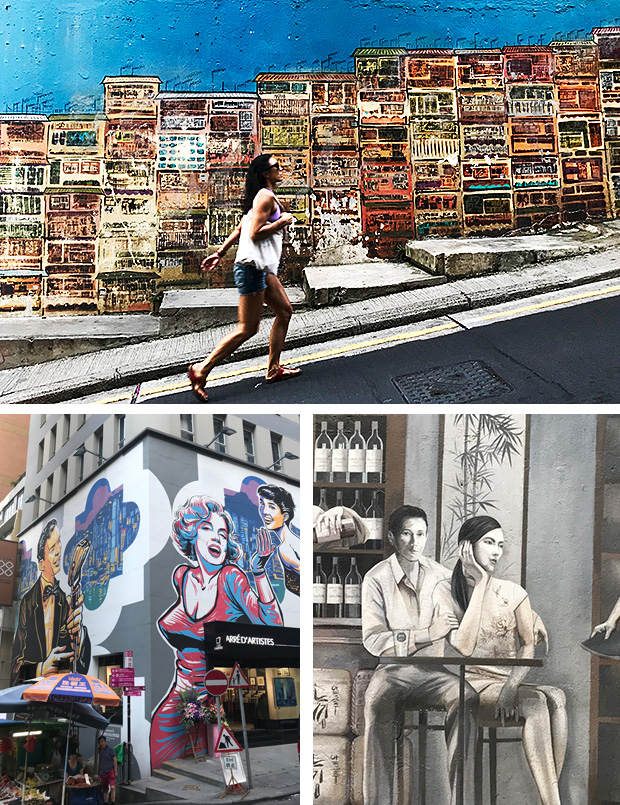 Among the popular street art in the central area of Hong Kong, the mural of the old community of Kowloon on narrow Graham Street is the most popular. It was painted by Alex Croft, the local graffiti artist, on the wall of Goods of Desire shop. Opposite the shop, you will find superstars of Hollywood on the wall of Hotel Madera. Just a short distance from the hotel to Elgin Street, there is more street art showing the ambience of an urban pub.

Tai Kwun means "big station" in Cantonese. The name refers to the central police station compound, said a centre guide. A Magistrate's House with jail blocks was first built in the compound in 1841. The site was rapidly expanded to 16 buildings and housed the Central Police Station, the Central Magistracy and Victoria Prison.

"Once a closed compound to the public, the centre is today the latest landmark and the largest art space on the island," said the guide.

The renovation project started after the compound was shut down in 2006 when government agencies moved to new locations. The Hong Kong Jockey Club worked with the Hong Kong government to outline the conservation plan. The aim was to preserve the historical buildings, which were listed as Declared Monuments in 1995.

The renovation project took about a decade to be completed with a total investment of US$3.8 billion (about 16 billion baht), said the guide, adding that two new buildings were built -- the Contemporary Building and an auditorium for hosting film screenings and performing arts. 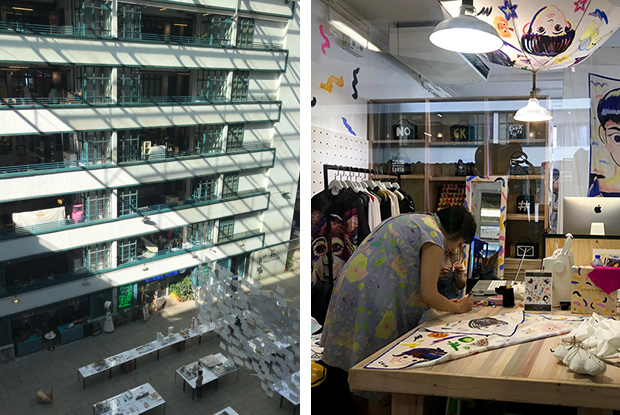 PMQ is like a local mall of creative products, which you may not find in typical shopping malls or markets in Hong Kong. About half of the shops offer fashion and household products while the rest are in creative design categories such as furniture, jewellery and fashion accessories such as eyeglass frames made from horns of buffaloes and yaks in the Smith and Norbu shop and stylish wristwatches by Eone, which were originally designed for the blind to tell time by touching.

The renovation team put in all efforts to return the authenticity of the original designs and colours with the existing materials. They went to many places including England and Scotland to find original blueprints of each building, said the guide.

"Based on extensive researches and advice of experts from Hong Kong and overseas, the renovation project shows a new standard for heritage conservation in Hong Kong," she said.

One of the more striking buildings is the postcard-perfect two-storey red brick structure. Built in the Victorian-style with old roof tiles, it is set against modern skyscrapers in the heart of central Hong Kong.

The century-old building was the former police headquarters. It houses the "100 Faces Of Tai Kwun" exhibition to show stories of people who worked at the station and locals living near the station compound. It offers QR codes for visitors to learn about the daily work of police officers.

Opposite the red brick blocks is the 154-year-old four-storey Bararak Block. It houses an exhibition on the compound's history, the renovation work, police records, plus policing artefacts, such as old handcuffs and guns. 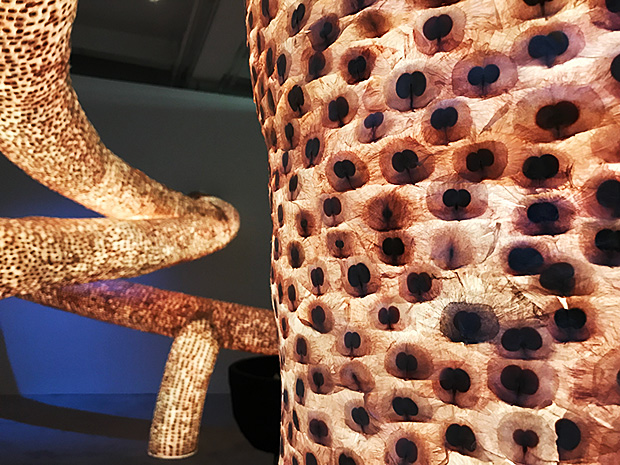 These are some samples of contemporary art on display at the inaugural exhibition "Dismantling The Scaffold", presented by Hong Kong curator Christina Li. The exhibition shows the everyday lives of Hong Kong people through the history of Tai Kwun and its current role as the permanent cultural institution and heritage site in Hong Kong.

Another highlight of Tai Kwun are the old prison cells, a popular spot that offers visitors a glimpse of life behind bars. Here, tourists take turns taking selfies inside the cell or to pose for pictures while holding the bars tightly.

"One of the notable prisoners at the Victoria Prison was the late Vietnamese leader Ho Chi Minh. He escaped prosecution by French authorities in Vietnam and was arrested by British authorities in Hong Kong. He was imprisoned here [during 1931-1933]," said the guide.

From the jail site, we walked to the newly built Contemporary Building. Its outstanding architecture was designed by the renowned Swiss-based Herzog & de Meuron company, which designed the Beijing Olympic Stadium.

The first exhibition hosted in the building is the "Dismantling The Scaffold", which marks the transformation from a law enforcement compound to a cultural and heritage site. More than 20 local and international artists joined the exhibition, such as the Xijing Men, who are an international artist team comprised of Chen Shaoxiong from China, Tsuyoshi Ozawa from Japan and Gimhongsok from Korea.

Time stood still for me as I explored the various art objects. It's quite impressive.

From Tai Kwun, we proceeded to H Queen's, which opened in March. H stands for headquarters while Queen's refers to its location on Queen's Road. The 24-storey building, which looks like a modern office building, houses a number of world-class art galleries like Pace Gallery, Hauser & Wirth and David Zwirner. 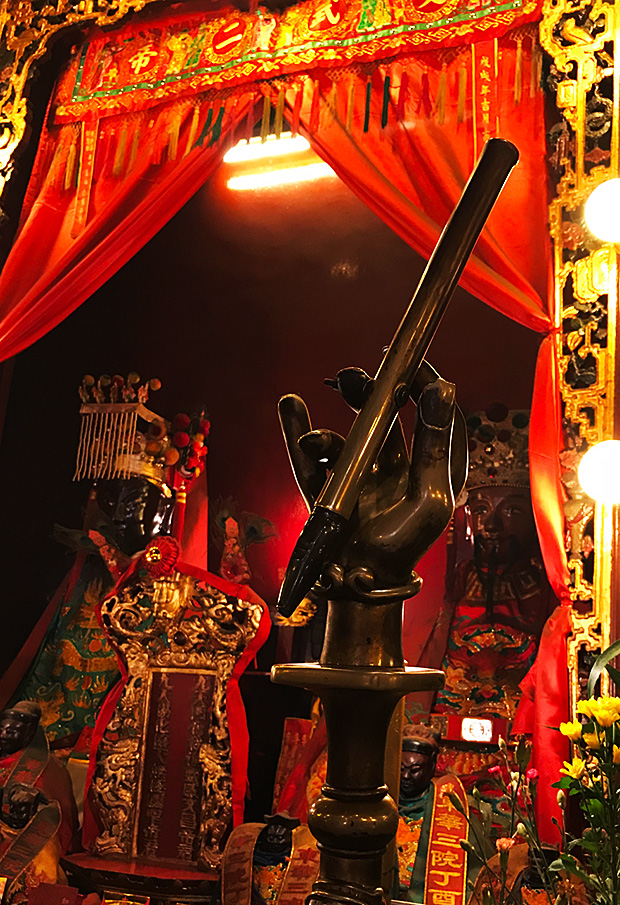 This old Man Mo Temple is about 300m walk from PMQ mall. Built in 1847, the temple is a tribute to the God of Literature and the God of War. It is a famous place of worship, especially for students who want to boost their confidence in taking examinations or for those who want to pass tests for government agencies. The worshippers also rub the God of Literature's hand while holding the Chinese brush for luck.

We visited the Pace Gallery, which occupied the entire 12th floor of the building. It shows a series of 10 new works of Mao Yan, a neorealist Chinese painter. The "By The Edge" exhibition displays his landscape paintings and "Thomas" series, his longest portrait project that begun in 1999. Before coming to Hong Kong, the work of Mao Yan was shown in the Pace Gallery in Beijing and New York.

Galerie Ora-Ora was another stop we made. Located on the 17th floor, it is known as one of the leading galleries in Hong Kong. Focusing on co-exhibiting Chinese and Western contemporary art, it presently is showing the "Amplified" exhibition that features Finnish artist Juri Markkula and Cindy Ng of Macau.

Our last stop in the art journey was PMQ, the former Police Married Quarters. Located on Hollywood Road, the seven-storey building was built in 1951 for police officers with families. The aim was to encourage more people to join the department, said the PMQ guide.

It has 169 residential units in total with a courtyard and a rooftop space. The property was deserted for almost 10 years after the families moved to a new place around 2000. Later, the building was renovated to be a centre for creativity and design, and renamed PMQ to remind people of the history of the building.

Opened in 2014, PMQ has space for outdoor art exhibitions and events in its courtyard, while the ground floor also has a large art hall. The property, which still resembles a housing project, is home to more than 100 outlets run by local designers whose dreams are to be entrepreneurs. Some units are renovated as working spaces, a library and design studios. 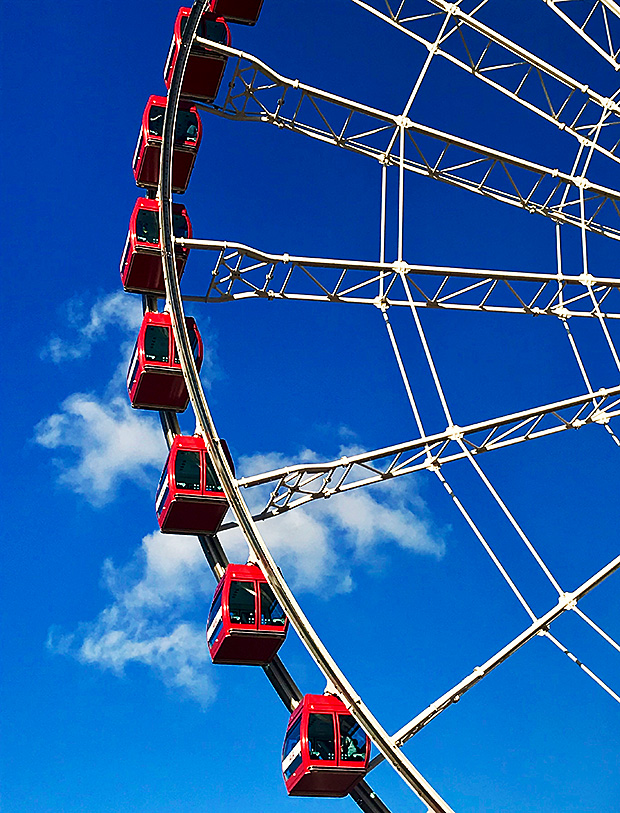 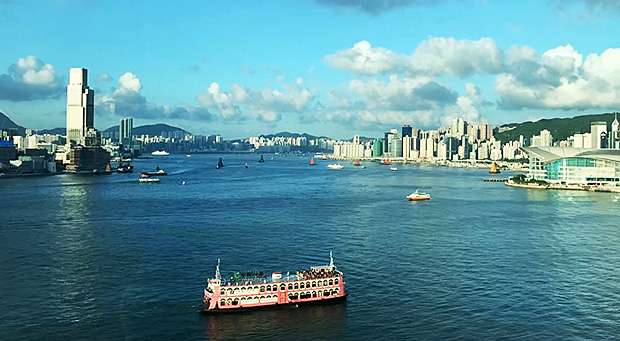 Riding the 60m-high Hong Kong Observation Wheel may give you another city view over the Victoria Harbour. Repainted in red, the Ferris wheel offers a 15-minute ride for HK$20 (85 baht), down from the previous prices at HK$100 (468 baht). The service is available from 11am to 11pm daily. Visit hkow.hk.

"Our aim is to develop local creative industries. We help those who have creativity to have an outlet to sell their branded products by offering them a rental fee about 50% cheaper than the average street price," he said.

Those outlets are not big, but packed with products created by youth passion such as Loom Loop founded Polly Ho, a local fashion designer. She integrates organic dyed silk clothes with traditional Chinese crafts. She intends to preserve traditional Chinese culture in her fashion designs. Not far from her shop are outlets for high-quality women's bags, office utensils and household decorations by Hong Kong designers.

If you have more time for art, you may walk along Hollywood Road and nearby streets to explore street art. When you get tired, rest your legs in a fine dining restaurant along Central Ferry. The sunset views are incredibly romantic.

When you plan to visit Hong Kong for your business or family trip, spare a day to visit these art and design centres to see another side of Hong Kong. 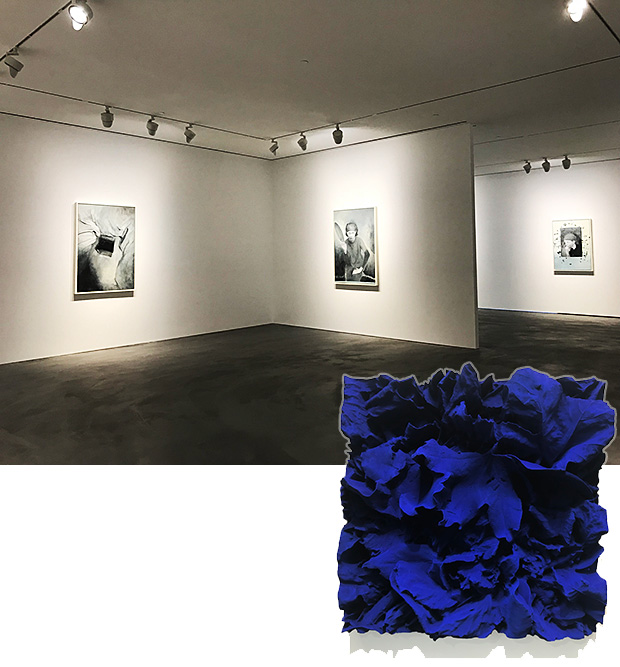 Visiting H Queen's opened my eyes through various techniques and forms of contemporary art. Curators of Pace Gallery and Galerie Ora-Ora are friendly and willing to give you a brief tour if you ask. You can visit each gallery to see the art collections without too many people blocking your view. Perhaps you may find some interesting pieces of art to add to your collections. 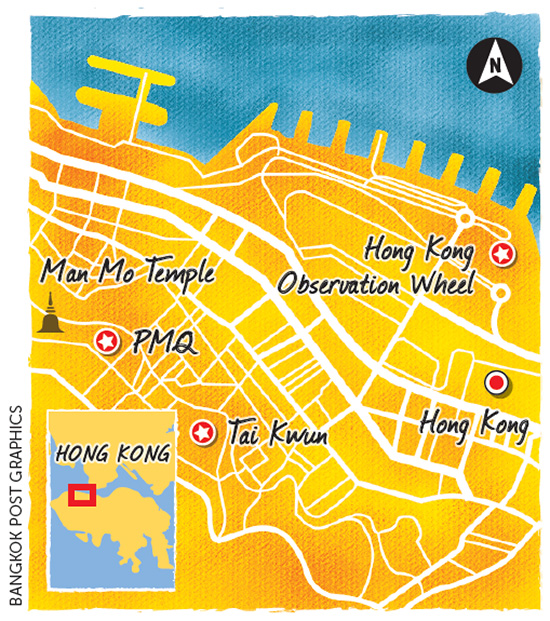