While millions of tourists flock to Tha Tian and Wat Pho (Temple of the Reclining Buddha) each year, a lot of Bangkok residents tend to avoid the area due to traffic jams and lack of parking space. If it has been quite a while since you've been to this old quarter, it's time to set a date for a revisit and witness the charming results of its recent makeover. If you don't think you can fall in love with this history-rich part of the city, come again and test your heart. 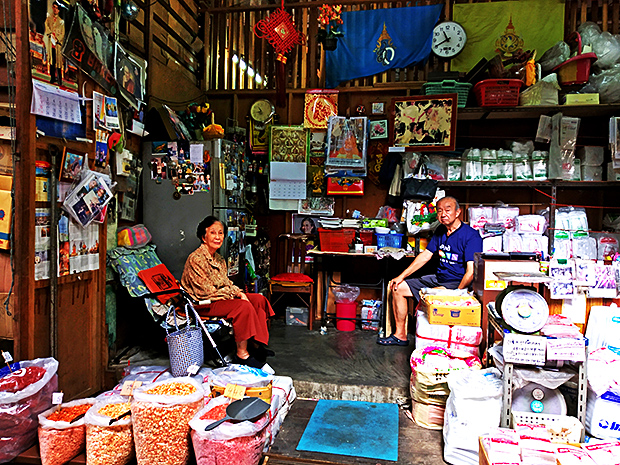 Old-style groceries and shops selling dried seafood and other ingredients can still be seen in the “wet market” of Tha Tian. The market is bordered on three sides by the century-old U-shaped building recently renovated as part of a project by the Crown Property Bureau to conserve old architecture under its care around the Grand Palace. It now houses both original shops and new cafés and restaurants. Just opposite the restored building, on the east side of Maharat Road, is one of Bangkok's most popular attractions for international tourists, the Temple of the Reclining Buddha.

Tha Tian and Wat Pho have long been associated with Wat Arun (Temple of Dawn) on the other side of the Chao Phraya River, thanks to a popular legend that says the demon sculptures from both temples got into a major fight that destroyed all structures in the riverside area, hence the name Tha Tian. Tha means pier, and tian, completely razed. There are other theories about the origin of the name, including one involving a big fire during the time of King Mongkut (Rama IV), which burned palaces and royal warehouses in the area to the ground. There is no record that, prior to the catastrophe, the zone was referred to as Tha Tian.

These days, Tha Tian, with a ferry service, serves as a major gateway to Wat Arun. More than that, riverside restaurants and boutique hotels on the Tha Tian side also offer a great view of Wat Arun's iconic corncob-shaped stupa, which is very beautiful at the sunset.

Wat Pho is one of the most important temples of the current, Rattanakosin Period, while Wat Arun was a royal temple of King Taksin of Thon Buri. Both temples dated back to the Ayutthaya Period but were restored and expanded by kings of the new capitals.

And guess what. The Chao Phraya, which separates the two grand temples, wasn't there until less than five centuries ago. This section of the river was dug as a shortcut for trade ships under the command of King Chai Racha Thirat, Ayutthaya's 13th monarch. The original course of the river has narrowed over time. Different parts of it are now called by different names, such as Klong Bangkok Noi and Klong Bangkok Yai. Perhaps Wat Pho and Wat Arun didn't exist when the new Chao Phraya was first created. Still, it's fascinating to know that once upon a time people could actually walk between the two locations. 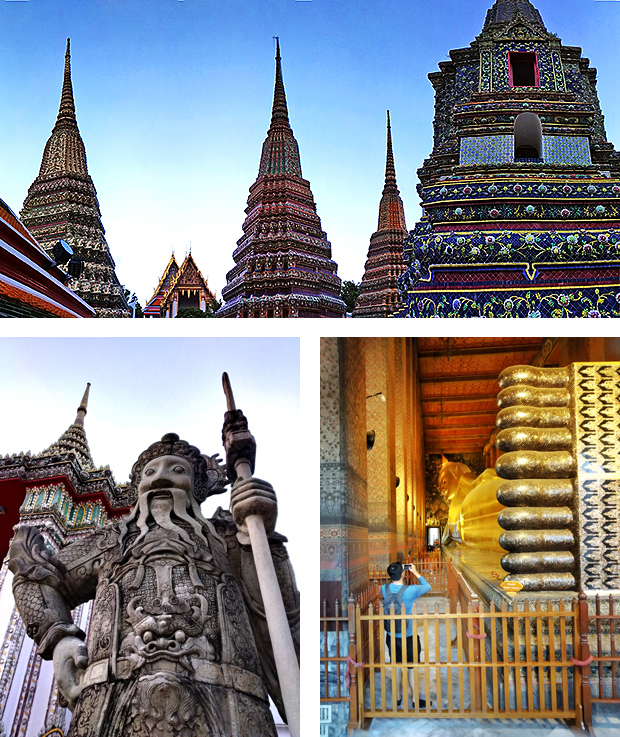 Always one of Bangkok's top attractions, Wat Pho is a showcase of many fields of Thai art and wisdom. Knowledge of traditional medicine, therapeutic massage, religion and literature are depicted in mural paintings or carved in stone so people can come and learn for themselves. The temple boasts the largest collection of stupas and Chinese stone sculptures, the latter a common sight at many temples built or restored during the early reigns of the Rattanakosin Period. Past glory revived Wat Pho is marking its 230th anniversary with an 11-day celebration, starting on Nov 1. There will a variety of traditional performances and academic discussions on the art and culture that are related to the temple. People attending the fair are encouraged to wear traditional Thai costumes.

More realistic, and more fun, nowadays is walking through the market and alleys of Tha Tian, Wat Pho and nearby areas.

Wat Pho is one of Bangkok's largest royal temples, both by size and importance. It boasts not only the famous Reclining Buddha but different types of Thai architecture, which come in different styles since they were built or restored during the reigns of different kings. Among the most important structures are the vihan, where the Reclining Buddha is housed; the ubosoth (ordination hall), where the remains of King Rama I are enshrined in the pedestal of the principal Buddha image; and the sala kanparian (multi-purpose pavilion), which was the original ordination hall of Wat Pho before King Rama I had the temple restored in 1788 -- six years after he established Krung Thep (the shortened version of Bangkok's extremely long official name), on the east side of the Chao Phraya, as the new capital. Since the ubosoth was built during the time of the first reign and the vihan during the third reign, the sala kanparian is the oldest structure of the three.

Strolling eastward from the northern exit of Wat Pho, you will find an intersection where your road meets Sanam Chai and Charoen Krung roads. On the northeastern corner of the junction, there is a patch of greenery, the Saranrom Park. Born a Bangkokian, I have passed this park numerous times. I never knew it was such a nice and interesting place until recently.

From the junction, if you follow Sanam Chai southward, you will get to the Museum Siam, where you can learn about different aspects of Thainess, and to Pak Klong Talat, which, despite the removal of roadside vendors, is still a major flower market. But Pak Klong Talat has more to offer than cut flowers, from architecture to the lifestyles of people living and working in the area around the clock. It's one of the parts of Bangkok that never sleep.

This area next to the Grand Palace may not be huge. As a matter of fact, from Tha Tian to Pak Klong Talat, it's fewer than 650m. But trust me, if you are a culture or history buff, or even a shutterbug, a whole day may not be enough for you to explore the area. 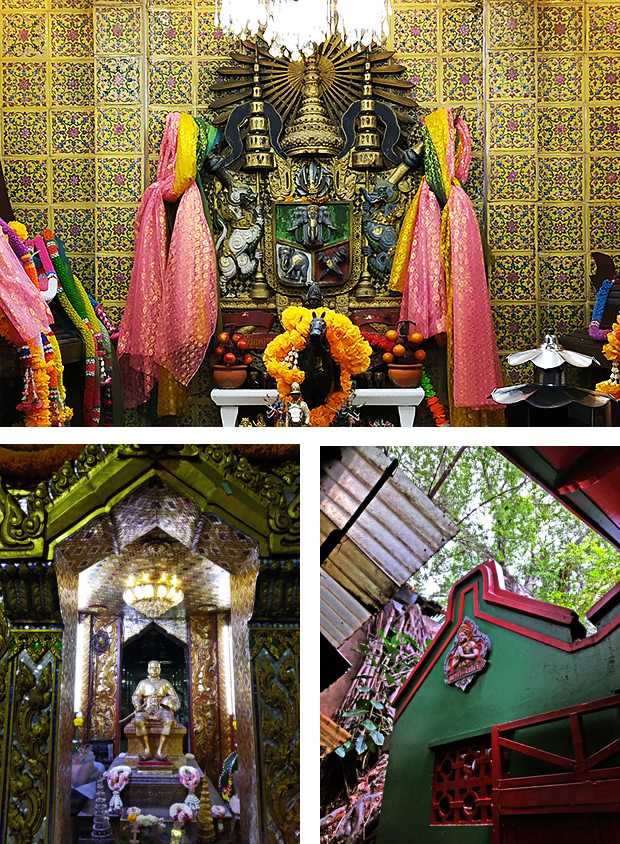 There is no better way to explore this part of the old Bangkok than walking. The area is home to several sites little-known to outsiders. One of the most surprising finds for me was the shrine of Tra Phaendin (country coat of arms) next to the Phra Rachawang Police Station. The coat of arms adorns the front of every police hat. This police station is just a stone's throw from Pak Klong Talat market. In the market itself, you must try looking for the statue of Somdet Krom Phra Ratchawang Bowon Maha Surasinghanat (Bunma), King Rama I's brother and viceroy. The king's larger and better-known statue is not far away. It graces the Memorial Bridge next to the east end of Pak Klong Talat. Another example is closer to Tha Tian. It is a Chinese shrine dedicated to the guardian spirit of a fig tree. The shrine and the giant tree are hidden between shophouses built during the reign of King Rama VI. There are also a few other shrines in the area. During my wander, I ran into many friendly people and no stray dogs. Roaming off the main streets into alleys and other public areas was pretty safe. 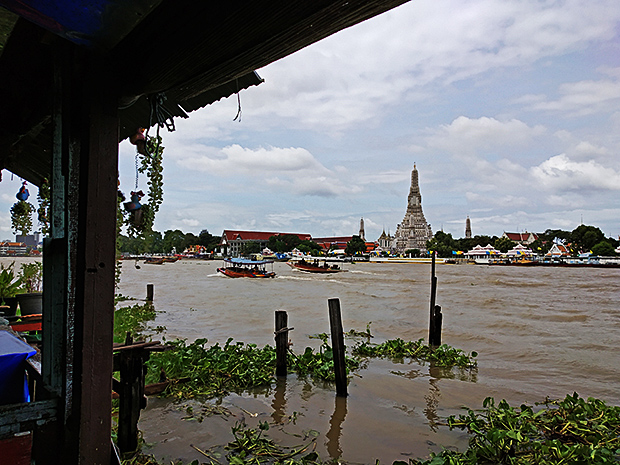 On the other side of the Chao Phraya River stands the iconic phra prang, or corncob-shaped stupa, of the Temple of Dawn. It is widely believed that the Buddhist monastery, known in Thai as Wat Arun and Wat Chaeng (both arun and chaeng mean dawn), was so named because King Taksin of Thon Buri arrived at the site where he would build his capital early in the morning. Phra Prang Wat Arun, despite its location across the river, has played a big role in Tha Tian's return to popularity. A number of boutique hotels and restaurants on the riverfront offera great view of the stupa. But if you want to save money, you can enjoy a similar sight from the pier, where the ferries run between Tha Tien and Wat Arun. This photograph was taken from a modest restaurant on the pier.

Several shophouses in Tha Tian have been converted into chic cafés and restaurants, providing visitors not just with cosy places to hide from the scorching sun but also yummy refreshments. Some, like a restaurant called Siam Spring Bistro, also conduct workshops on a variety of crafts, from making malai (traditional garlands) to sculpting Buddha images.

Located on the site that was once a royal garden of the same name, Saranrom Park, across Sanam Chai Road from Wat Pho and the Grand Palace, provides refreshing greenery and a recreation ground for residents of nearby areas. Hidden in the park are a number of century-old architectural works, including a building that used to house the Thawee Panya Samoson, a literature club founded by King Rama VI. Sadly, the structure is now in a dilapidated condition. 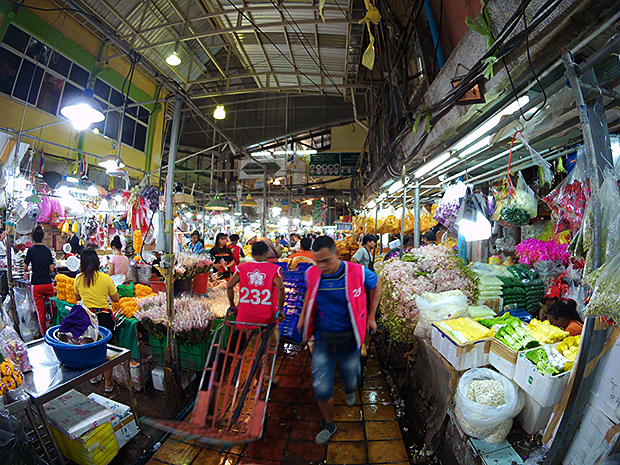 Pak Klong Talat, Bangkok's most famous destination for flower shopping, is about a 15 minutes' walk south of Tha Tian. As part of an urban-beautification plan, roadside vendors have been forced to move to other locations. Yet, in the four roofed markets of the area, business continues as usual.

- Tha Tian can be reached by various modes of public transport. If you want to avoid road traffic, the Chao Phraya Express Boat is a good option. Next year, once the extended Blue Line MRT begins operation (actual date not yet confirmed), you will be able to conveniently take the subway all the way to the Museum Siam, just a short walk from Tha Tian, Wat Pho and Pak Klong Talat. The MRT station, named after Sanam Chai Road -- which runs along the east side of Wat Pho Tha Tian is on the temple's west side) -- promises to be one of the most beautiful of its kind.

- For those who prefer to drive, the good news is that if everything goes as planned, construction of the underground car park next to Tha Tian market should be completed next year. 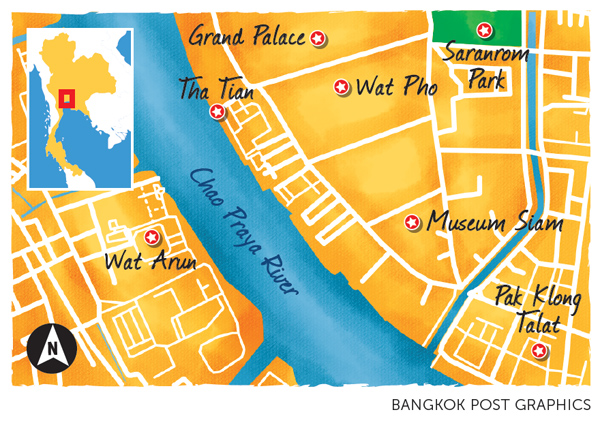