Royal history for kids to witness

Bang Pa-in Palace, near Bangkok, is a winning idea for Children's Day

If you're looking for an educational field trip for your kids on the Children's Day, one choice not far from Bangkok is Bang Pa-in Palace. It is a place where your children can learn about history dating back to the Ayutthaya period as well as the beauty of the mixed architectures of the East and the West.

Originally built in the 17th century, the royal palace was a memorial of the birthplace of King Prasat Thong (1600-1656). The king was born to a commoner named In and the young prince Ekathotsarot, who later became the King of Ayutthaya after King Naresuan the Great. 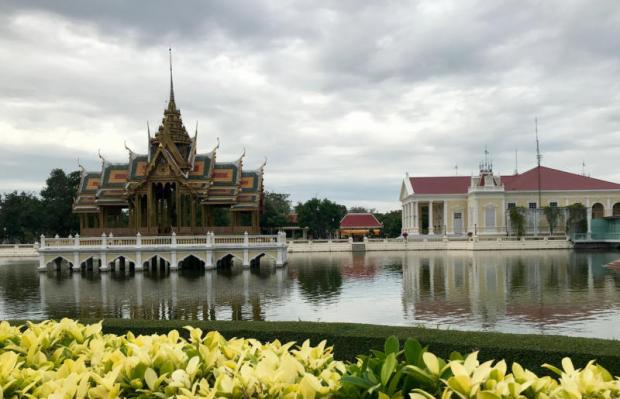 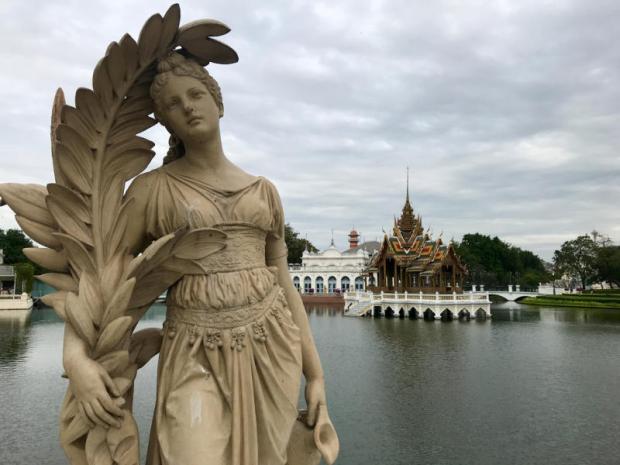 After ascending to the throne, King Prasat Thong founded Wat Chumphon Nikayaram, which still exists, on the land of his mother's house on Koh Ban Laen. He also had a palace built in 1632 as his summer retreat. The palace is located south of the temple and on the bank of the Chao Phraya River.

The summer palace was also used by other kings of Ayutthaya until the Kingdom ended in 1767. The royal residence was abandoned for more than eight decades and it was King Rama IV who restored the place and brought it back to live in as his summer residence. The king also renovated Wat Chumphon Nikayaram. 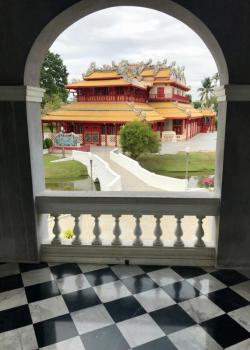 The palace was widely expanded during the period of King Rama V and became the Bang Pa-in Palace we know today.

The royal summer retreat is located on a 116 rai plot of land. It houses more than 30 buildings. The palace complex has two zones: the outer and the inner. The outer was designed for ceremonies and state functions, while the inner was reserved for kings and members of the royal family.

From the entrance gate, you will notice neat lawns, shady gardens and a clean walkway. The path will lead you to Ho Hem Monthian Thewarat. It is a Khmer-style shrine built during the period of King Rama V in 1880 to honour and house a sculpture of King Prasat Thong.

From the shrine, you will see the white bridge adorned with vintage Greek angel sculptures. The art pieces are highly contrasted with the royal hall built in the Thai-style architecture in the middle of the pond. The pavilion is Phra Thinang Aisawan Thiphya-art. It has a spired roof and was rebuilt by King Rama V in 1876. Today the structure houses the bronze statue of King Rama V.

After crossing the bridge, you will find the egg-shell-colour building. It is Phra Thinang Worophat Phiman. The building, which has the characteristics of neoclassical architecture, was used for hosting official functions. Next to the structure is the green bridge that links to the inner area of the palace. One side of the bridge that faces the outer area is covered with a louvred wall to protect court ladies from being seen by those who were in the outer part. 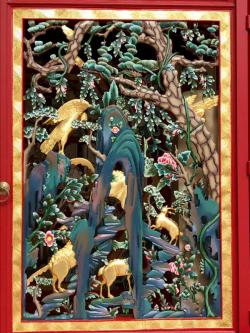 At the end of the bridge, you will find Devaraj Khanlai Gate, which looks more like a building. The gate used to be the passage for the kings to access the inner court. Today it is renovated as an exhibition hall displaying history and pictures of the palace and traditional Thai dresses.

You will find more highlights of the palace in the inner part. The first one is Phra Thinang Uthayan Phumisathian. The two-storey building was originally made of wood and built in the style of a Swiss chalet. It was the favourite royal mansion of King Rama V, as he usually stayed in the villa during royal visits. Unfortunately, the building was accidentally burnt down in 1938 during restoration. The new building was finished in 1994. It is made of concrete and painted in purple. Today it is under renovation.

Opposite the royal residence is the red-and-yellow observatory tower. The name is Ho Withun Thatsana. Due to its old age, the six-storey tower is open for public visits only up to its fourth floor. You need to negotiate a spiral staircase. But you don't have to climb the 76 steps at once. You can take a short rest on each storey before being awarded with fresh air and the palace view on the fourth-floor balcony.

Standing next to the observation tower is Phra Thinang Wehat Chamrun, a two-storey royal mansion. The architecture was different from other buildings because it was built in the Chinese style. The hall was a present of Chinese expatriates who wanted to express their gratitude to King Rama V.

The building has Chinese name, Thien Meng Toey, meaning glorious sky throne hall. It was said that the king also liked the mansion and it was the favourite royal villa of King Rama VI, who usually stayed in the villa when he visited the palace. The ground floor houses a throne, and the upper floor has name plates of King Rama V and King Rama VI with their queens. The building is now under renovation and closed to public visits. 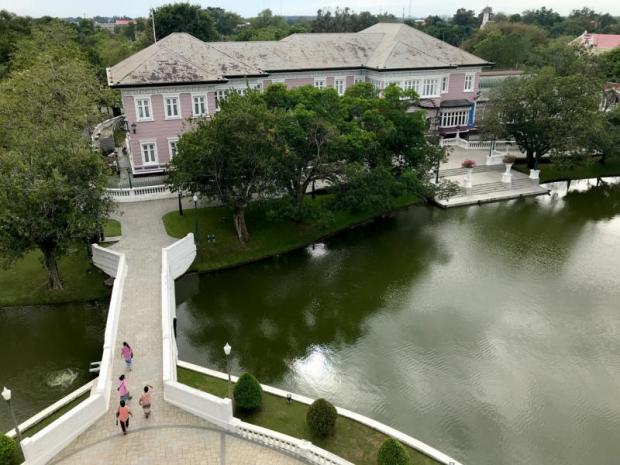 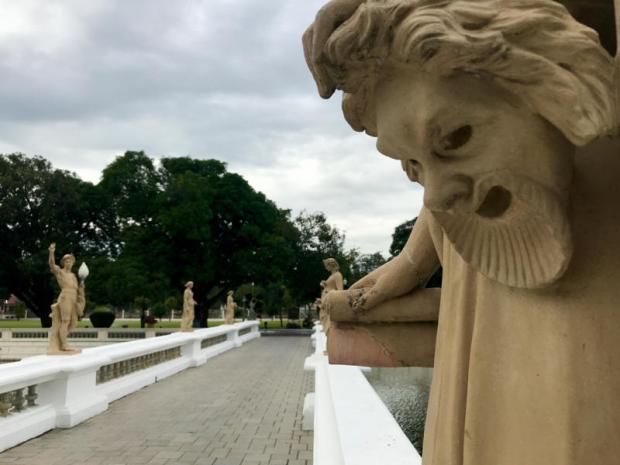 The Greek sculptures on the White Bridge. 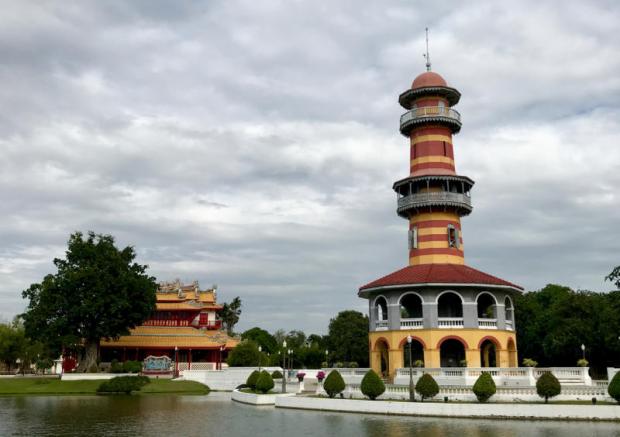 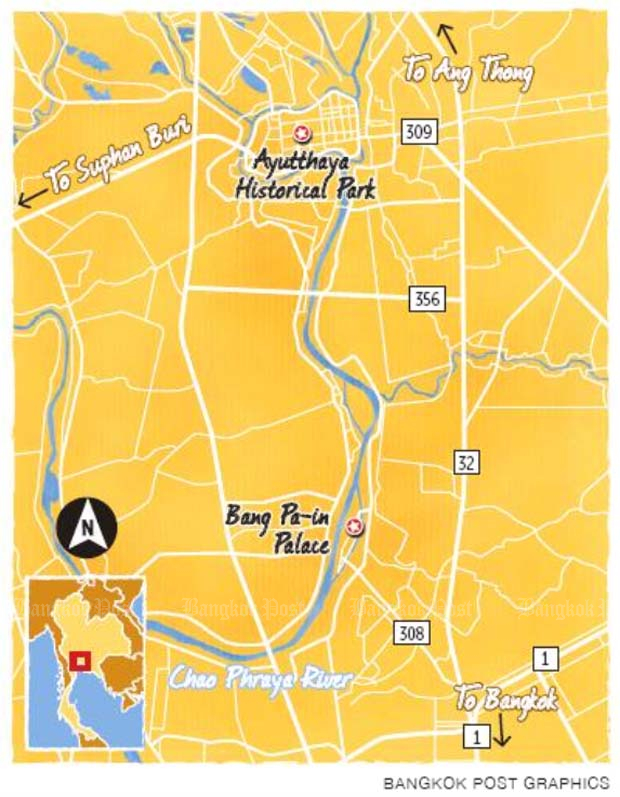