published : 28 Feb 2019 at 04:00
newspaper section: Life
writer: Karnjana Karnjanatawe
Dozens of followers join the fire-walking. Each bearer received a ‘hu’ or pha yan (a piece of talismanic cloth) from the Lim Ko Nieo Shrine before joining the celebration. They were soaked in nam mon (holy water) before the walk. The fire bed is made of burnt charcoal, covered by dry coconut leaves. While walking, some devotees scoop rice grains or salt and throw them into the fire, as a gesture to get rid of bad things. (Photo by Chayawat Manasiri)

Before the Sun rose over the Pattani River, one community in the city of Pattani were widely awake or perhaps didn't sleep from the night before. The old quarter was known as Chinatown Pattani. Last Tuesday, it was crowded with thousands of people from many parts of the country as well as visitors from Malaysia. They came to join the annual celebration of Chao Mae Lim Ko Nieo, the revered Chinese goddess.

It was a bit amazing to see the large group of Chinese descendants holding the festival in the far southern province where the majority of people are Muslims. 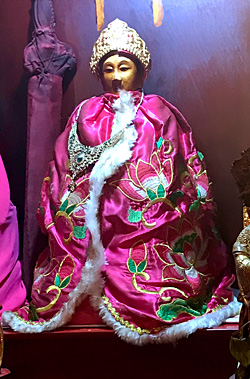 "The festival reflects the uniqueness of Pattani where Thai Buddhists, Chinese and Muslims can live well together. The celebration also shows that happiness can be found in the Deep South," said Dr Noppadol Tippayarat, dean of Fine and Applied Arts Faculty of Prince of Songkla University, Pattani Campus.

The celebration has been organised for more than a century as a blessing to their community. It is held every year on the first lunar day after the Chinese New Year, or 14 days after the new year. The date always falls on Makha Bucha Day. This year, it was on Feb 19.

A story of Chao Mae Lim Ko Nieo somehow has two different versions. One has been told by Chinese descendants in Pattani, the other by Muslim locals. For the followers of the deity, the story dates back to the 16th century.

According to a guide from the Lim Ko Nieo Museum, Lim Ko Nieo (also known as Lin Guniang) was one of younger sisters of Lim Toh Khiam (or Lin Daoqian) who was a merchant in southern China but had been falsely charged as a pirate leader. He and his 2,000 crew escaped Chinese authorities to Luzon Island (which is part of the Philippines today) and later to Pattani in the 1570s. He got married to a daughter of Pattani's ruler and converted to Islam. As a skilled person, he and his team built three canons to help the ruler protect their territory as well as a mosque. Today it is known as Krue Se mosque.

While he resided in Pattani, his mother in China was sick and wished to see the long-gone eldest son. Lim Ko Nieo volunteered to bring him back home. She vowed to take her own life if she failed. She set sail from China with 70 people in nine boats and headed south. She somehow learned that her brother settled in Pattani. When they met, Lim Ko Nieo told him about the mother's last wish. But Lim Toh Khiam denied returning in fear of being imprisoned. In addition, he had a mission to complete building the mosque. 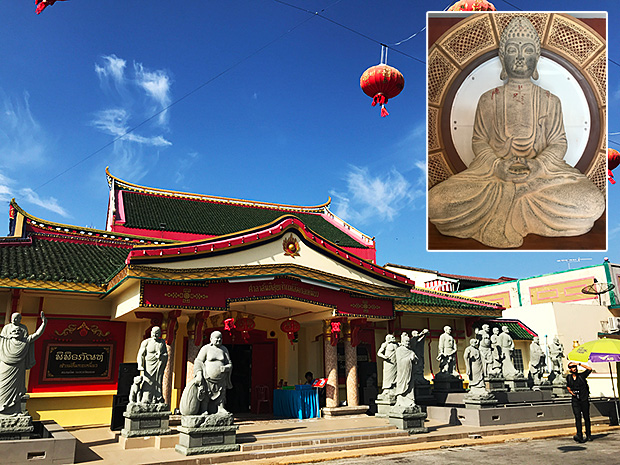 Located not far from Lim Ko Nieo shrine, Lim Ko Nieo Museum has exhibitions about the deity. There are also images depicting her life on the wall as well as a collection of old palanquins used for the celebration.

Realising that she failed her mission, Lim Ko Nieo committed suicide by hanging herself on a branch of a cashew tree next to the under-construction mosque. The story went on that she put a curse that the construction must never be completed. Lim Toh Khiam was very sad after the death of his sister. He buried her where the body was found. The spot today is a large graveyard behind Krue Se mosque. Lim Toh Khiam continued the work but each time the roof was built, it was hit by lightning. They stopped building the roof after three attempts so people strongly believed in the spirit of Lim Ko Nieo.

Lim Ko Nieo was honoured as a person who was true to her words and grateful to her mother. After her death, some locals built a small shrine for her under the cashew tree.

Later, her sculpture was created out of the branch that she hung herself with. Her sculpture has been housed in her present shrine also called Leng Chu Kiang Shrine on A-noh Ru Road in the city. The shrine was built in 1879 by Khunphra Chin Kananurak, the leader of the Chinese community. It also houses the highly respect Zhou Shi Kong, the deity whom people believe has the power of healing sickness. 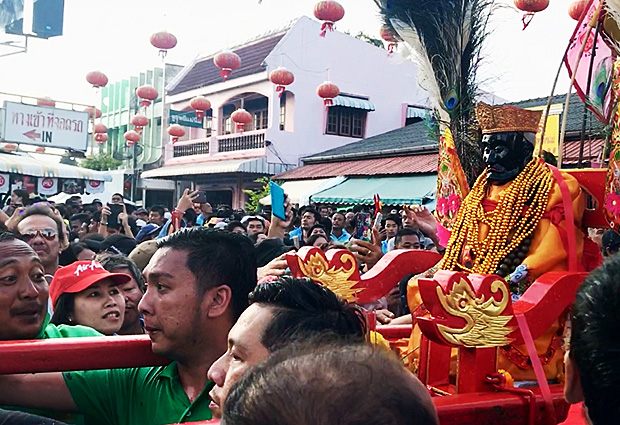 Devotees await their turn to join the fire-walking. Along the way, visitors try to touch any part of the palanquins and divine sculptures for the blessing. 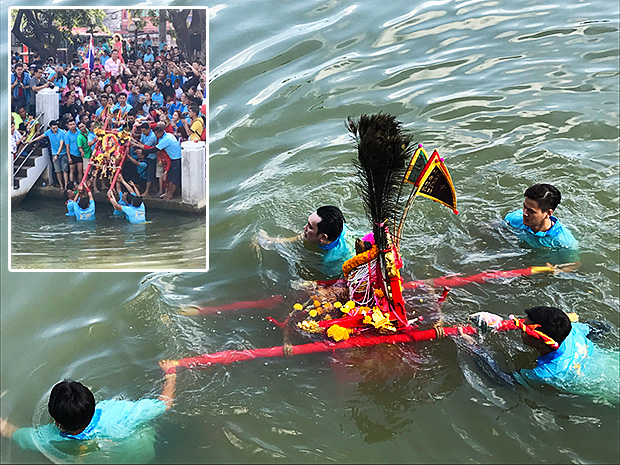 Devotees swim across the Pattani River with a god on the palanquin. The aim is to imitate the time when Chao Mae Lim Ko Nieo set sail from China to Thailand.

Muslims believe the Krue Se mosque was built before the time Lim Ko Nieo was in Pattani or during the period of Sultan Muzaffar Shah (1500-1530), the first Pattani ruler who converted from Buddhism to Islam, said Attaporn Areehathairat, a retired teacher and local guide.

"The mosque is also called Masjid Sultan Muzaffar Shah. It does not have a domed roof as the original plan because of the imbalance of the construction," he said, adding that whenever the roof was built, it collapsed.

"Krue Se mosque is the only mosque in the region constructed by red bricks and has a mixed architecture of traditional Islamic and Arabian styles."

For Chinese descendants, the belief in Chao Mae Lim Ko Nieo has always been strong. They believe that the deity always grants them their wishes, especially for prosperous business, good fortune and health.

About a century ago, there was a cholera outbreak in Pattani. People put the sculpture of Zhou Shi Kong, the principal deity of Lim Ko Nieo shrine, on a red palanquin and carried the sculpture around the community. 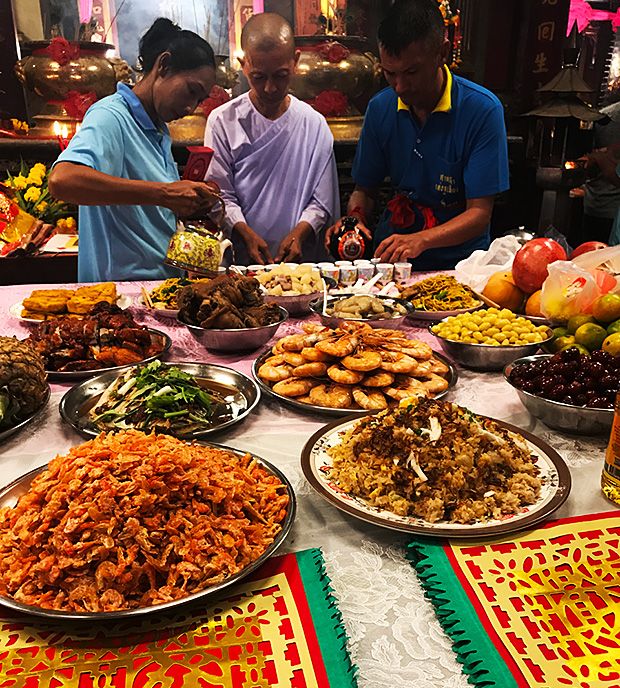 A wide range of offerings are prepared for the deities in the Lim Ko Nieo shrine and also at the front of houses of followers. Krue Se mosque was listed as a national heritage site by the Fine Arts Department in 1935. The construction of the mosque is still incomplete after building began more than four centuries ago. The mosque is still used for praying. It is open for public visits daily.

"The outbreak gradually disappeared. Since then we had a parade to carry the sculptures of Zhou Shi Kong, Lim Ko Nieo and other respected deities around our community every year. The procession is like a blessing. We believe the divines help ward off bad luck from our community," said Sathon Kanchanasim, 74, a committee member of Lim Ko Nieo shrine.

This year's celebration started after midnight on Feb 18 when all palanquin bearers, dressed in a blue T-shirt uniform, gathered inside the shrine. One by one, they asked for permission from each deity to place each of them on a red palanquin. Starting with the sculpture of Zhou Shi Kong, followed by Chao Mae Lim Ko Nieo and other gods and goddess.

When each sculpture was put on the palanquin, bearers -- only men -- danced to the tune of drums and bells. There were no ma song or devotees who were possessed by deities to take the pain or self-sacrifice by piercing their bodies like the vegetarian festival in the old town Phuket and Phangnga. The celebration in Pattani was simple but impressive. 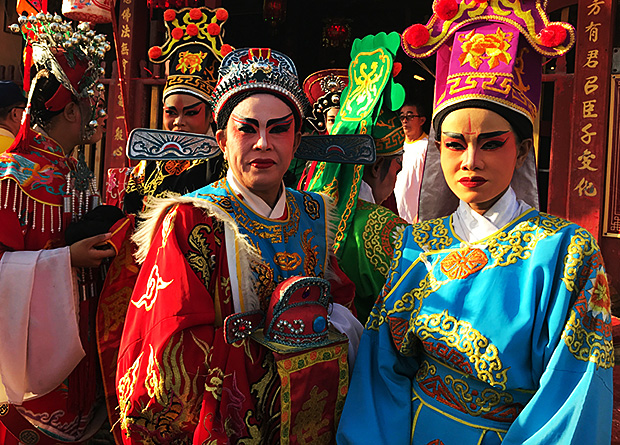 During the celebration, there are performances including dances, Chinese opera and dragon dances. 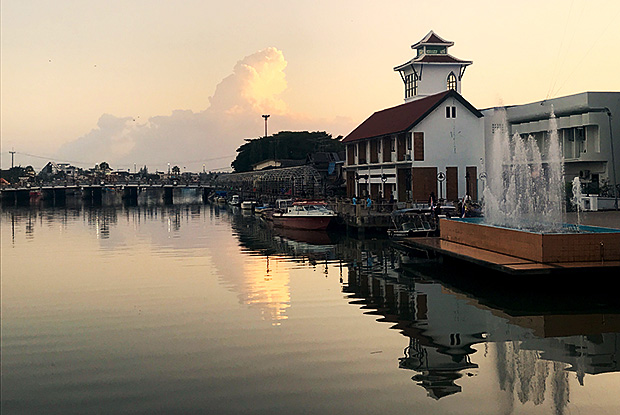 The morning scene at Dechanuchit Bridge over the Pattani River.

At 4.15am on Feb 19, the door of the shrine was opened. Locals lit up the long line of firecrackers. The palanquins of the deities were carried out of the shrine and walked along the streets in the community to bless people. There were 25 deities in the procession this year.

After the morning blessing, the bearers brought the deities to Dechanuchit Bridge for the lui nam or the floating ceremony. People packed along the banks of the Pattani River to observe the ceremony. Some tried to touch each palanquin or gather water from the river to sprinkle on their heads when each deity was floating on the river. Each palanquin was accompanied by four devotees who swam along both sides to lead the palanquin to the other side of the river.

The highlight came in the late afternoon when lui fai or fire-walking celebration started. The ceremony was hosted in front of Lim Ko Nieo Shrine.

"We believe that the fire-walking will help purify our soul," said Sathon who had been a bearer carrying the Zhou Shi Kong deity for 40 years.

"There is no fire that is not hot. I felt the heat since the first step on the bed of burning charcoals. But my feet have never been burnt because I have a strong belief in Chao Mae Lim Ko Nieo," he said.

Those who did not carry any palanquins of deities were also blessed by praying when the fire-walking was in process, he said.

Violence in the Deep South may scare some tourists away, but not followers of Chao Mae Lim Ko Nieo.

"I must come to Pattani for the ceremony. I have joined the celebration every year for 20 years," said a visitor in her 70s from Bangkok. She travelled with her family and said that it was because her life so far has been blessed by the deity. She felt it was her obligation to pay respect to the goddess at least once a year.

"I can't really explain what I feel. I am overwhelmed with happiness," she said. 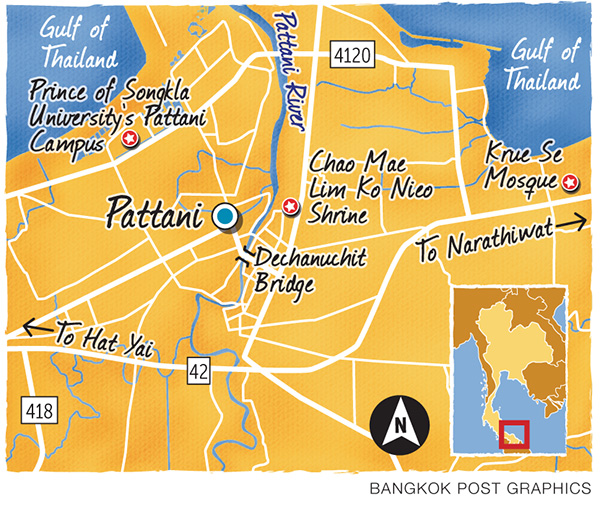