Mohandas Karamchand Gandhi, the guiding light of India's freedom struggle against the British Empire, lived in Delhi for only 720 days. But during that brief stay he left his mark on numerous locations that today draw throngs of tourists seeking to follow in his footsteps through the capital.

It started five years ago with one tour operator launching a "Gandhi's Delhi" package for foreign tourists. Today, at least three companies offer Gandhi tours and the number of explorers is on the rise.

"There has been 10% increase in the number of tourists this year compared to the previous year," said Suraj Jha, the founder of Go City Adventures which has run half-day Gandhi tours since 2016.

The four-hour tour includes a visit to Birla House, or Gandhi Smriti, where the advocate of non-violence stayed for 144 days and was assassinated; Rajghat, where he was cremated, and the National Gandhi Museum. The company plans to add the Charkha Museum and the Kasturba Gandhi museum to its itinerary. Kanika Sharma, 26, a guide with Go City, is currently exploring the two places in detail so that she can share that knowledge with visitors.

The tour operators believe that walks to the places associated with the charismatic leader can also help travellers rediscover and reconnect with the architect of non-violent civil disobedience.

"Our tour is dedicated to the father of the nation, offering experiential storytelling around Gandhiji's philosophies and ideologies which have evolved and developed over time, reflecting the spectrum of social values within and around the country," said Sachin Bansal, who founded Gandhi Walks in 2015.

"We make sure through our walks that the teachings and philosophies of Gandhi do not fade away." 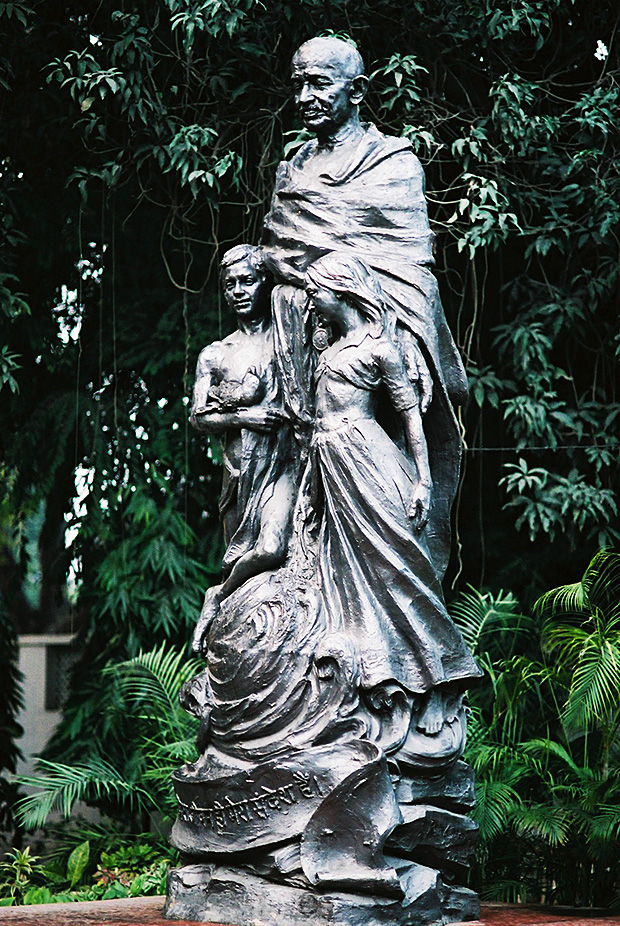 The statue of Mahatma Gandhi outside Birla House (now known as Gandhi Smriti) where the advocate of non-violence stayed for 144 days and was assassinated. (Photo: Hideyuki Kamon, Wikimedia Commons)

The tours, which cost between 1,500 and 3,000 rupees (695 to 1,390 baht) per person, help to quench the curiosity of international travellers, many of whom are drawn to India in the first place because they are inspired by Gandhi story.

"They ask all kinds of questions about Gandhi's childhood, his role in the freedom movement, partition, vegetarianism and even his relevance in the current political scenario. We try to answer these to the best of our knowledge," said Ms Sharma.

Ms Darira added that guides strive to tell interesting anecdotes from Gandhi's life but not to bore travellers with too much information.

What comes as a great help to guides is that Gandhi's entire life has been so well documented in the form of books, films and other media. Ms Darira says she mainly gathers information from films and museums. "Gandhi translated the Gita. Foreign tourists love to buy copies of his interpretation," she told Asia Focus. Ms Sharma relies on Google to fetch information when she needs to.

Gandhi tour operators obtain most of their clients by way of write-ups and reviews on sites such as TripAdvisor, Lonely Planet, BeMyGuest, Expedia and international travel companies. "Go City Adventures is a registered company and listed on these websites," Mr Jha said.

Gandhi visited Delhi 80 times between 1915 and 1948. Besides spending 144 days of his life at Birla House before his assassination, he lived in a colony of manual scavengers for over 200 days in 1946, and Kasturba Kutir, a hut in north Delhi with his wife Kasturba.

"Gandhi and Delhi are inseparable," said veteran journalist Vivek Shukla, the author of the recent book Gandhi's Delhi. "During his 214-day stay at Valmiki temple (the scavenger colony) he used to take Hindi and English classes. Gandhi used his stay in the colony to promote a movement against manual scavenging."

India will be observing the 150th anniversary of Gandhi's birth this year. Prime Minister Modi has announced plans for a major ceremony dedicating a Clean India to Gandhi on Oct 2, the date of his birth.

Up until five years ago, Gandhi tours were mostly confined to Gujarat state where he was born and brought up, or Bihar where he launched his first civil disobedience movement for indigo farmers after his return from South Africa in 1915.

Sites in Gujarat associated with the father of independence include Porbandar, his birthplace; Ahmedabad where he set up an ashram; Rajkot, where his father served as diwan (prime minister) to the king; and Dandi where he undertook his famous march against tax on salt in 1930. Champaran (Bihar), Yerwada Jail and Agha Khan Palace (Pune) are also associated with Gandhi.

As part of the 150th anniversary commemorations, the Indian government has released a special edition of Gandhi's autobiography, The Story of My Experiments with Truth, and a compilation of 100 books as the Collected Works of Mahatma Gandhi, running to 55,000 pages.

A number of films including Gandhi, The Making of the Mahatma, Gandhi My Father and Lage Raho Munnabhai have been made about his life and message.