A trip with a difference
Travel

A trip with a difference

published : 6 Jun 2019 at 04:00
newspaper section: Life
writer: Sanitsuda Ekachai
A statue of King Taksin graces the military camp named after him. The compound covers not just part of the old town, where Chanthaburi Fort and the Governor's Residence once stood, but also the site where King Taksin ordered his troops to destroy their rice pots before attacking the fort in 1767. Over a century later, the area was the seat of power of the French army during its occupation of Chanthaburi from 1893 to 1903. Their colonial buildings have been turned into museums. In the area, there are also old Chinese graves. Chanthaburi has seen seen several migrations of Chinese immigrants, chiefly from Vietnam.

Mention Chanthaburi and the first thing most people think of is fruit. Its orchards are abundant with durian, mangosteen, rambutan and many other varieties. However, there's much more to the eastern province than this. It has a rich local history and plenty of cultural diversity.

I have been to Chanthaburi several times, taking in most of its famous attractions. Yet, I was always a tourist, far from understanding the soul of the place and the hearts and minds of locals. So when the Lek-Prapai Viriyapan Foundation recently organised a trip to explore the province's cultural landscape -- aimed at promoting an understanding of how geography, ethnicity, wars and migration have shaped Chanthaburi's social fabric and history -- I knew I had to go.

This is tourism with a difference: the focus is on helping people understand the make-up of the place they are visiting, in order to get a sense of the real Thailand -- far from the nationalist narrative that fills our history textbooks.

Chanthaburi has a special place in Thai history for two significant events in particular. This was where King Taksin, then governor of Tak who broke away from the besieged Ayutthaya, ordered his troops to destroy all their rice pots before attacking Chanthaburi's citadel in June 1767. It was do-or-die, since it meant nobody would get to eat another meal until the mission was completed. The resulting swift victory consolidated his power, enabling him to return to Ayutthaya and win it back from the Burmese a few months later. 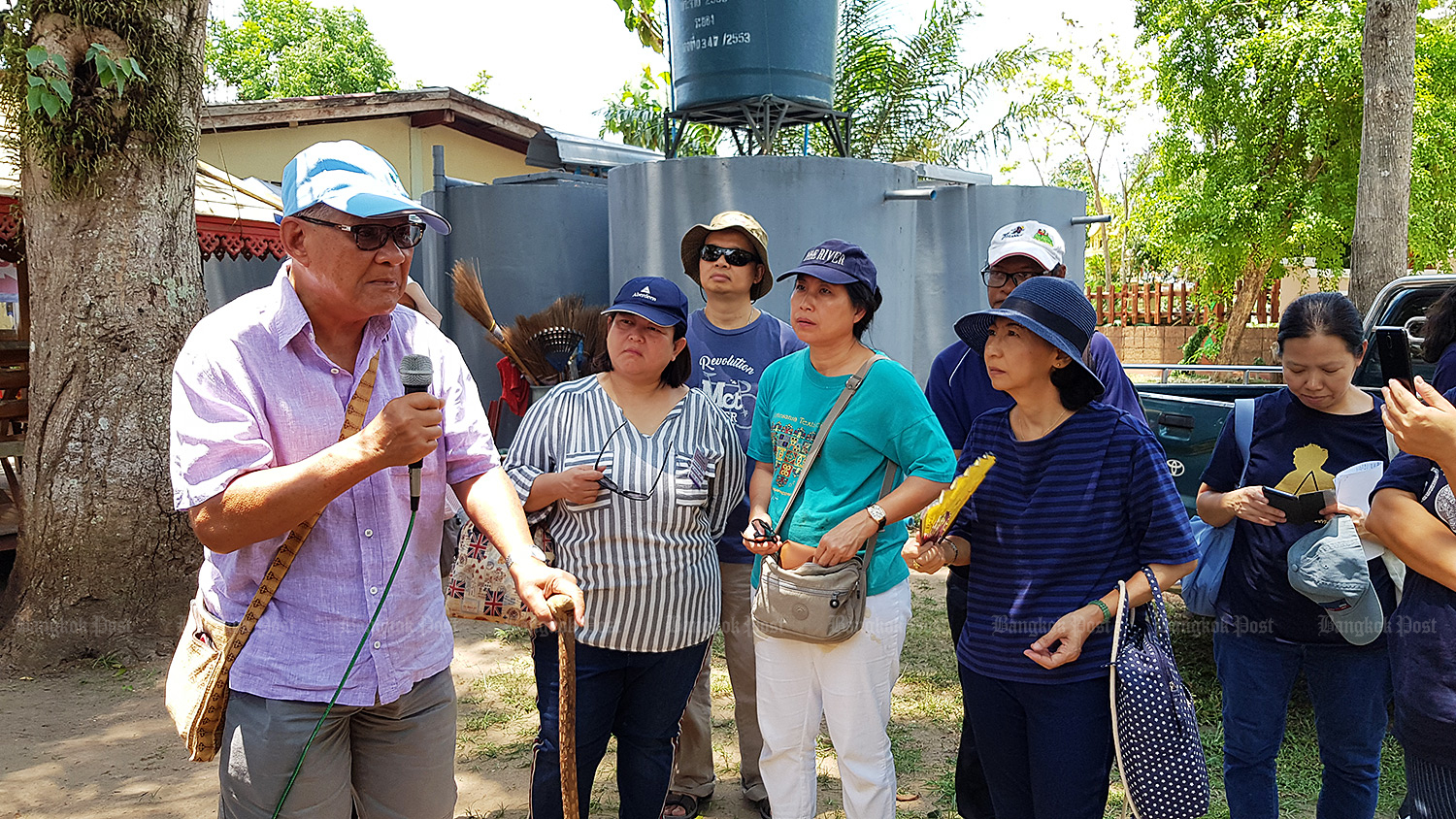 Archaeologist Srisak Vallibhotama, left, recently led a group of history buffs on a tour of Chanthaburi.

The site where the citadel of Chanthaburi and the residence of its governor once stood, viewed from the east bank of the Chanthaburi River. The area is now part of Taksin Military Camp. A little further downstream is a network of safe lagoons, which, together with valuable goods from the forests and mountains, made Chanthaburi an important port for maritime traders in ancient times.

King Taksin, the son of a Chinese immigrant and a Thai mother, is one of the most charismatic and best-loved culture heroes in Thai history. Shrines and legends about him sprang up along the routes he travelled while winning back Siam's independence from the Burmese. There are so many such stories that it is hard to say which are real and which are myth. King Taksin established Thon Buri as his new capital. It remained so for 15 years until the centre of power was moved to Bangkok on the opposite bank of the Chao Phraya River.

The other major historical incident was the Franco-Siamese War of 1893, during the reign of King Chulalongkorn. The ensuing peace treaty saw the French occupy Chanthaburi for 11 years, keeping vigil with warships along the coast. Siam eventually handed over parts of Cambodia in order to save Chanthaburi and Trat and, more importantly, the Kingdom's sovereignty.

Our trip followed the route King Taksin took to Chanthaburi, according to Ajarn Srisak's research, taking us through the ethnically diverse coastal communities. He concluded that the site of the rice pot story was inside what is now the King Taksin Military Camp in Chanthaburi town. His theory is controversial as it contradicts the traditional narrative that has the incident taking place at Wat Phlap, a Buddhist monastery 9km away. 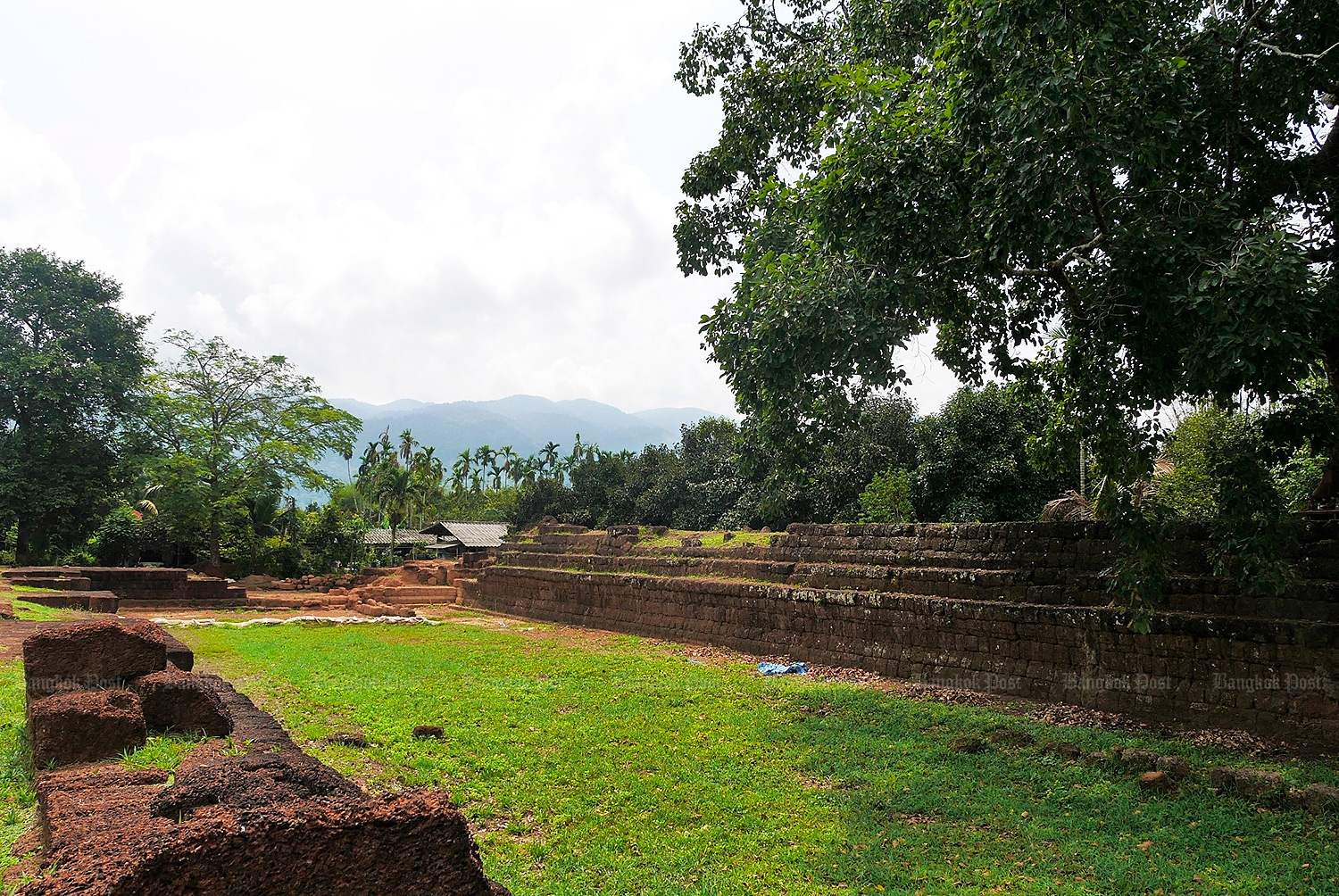 Over a thousand years ago, the area that is now Chanthaburi was part of an ancient maritime trade in Southeast Asia. Traces of Khmer and Cham civilisations can still be found at these adjacent places. This archaic laterite reservoir at the Paniad archaeological site shows the influences of the ancient kingdoms. The Kawai Goddess Shrine next to the reservoir indicates that the ethnic Chong people were among the original inhabitants of the port town before being overwhelmed by other ethnic groups. The goddess fable suggests Chong society was matrilineal. Thong Thua Temple houses an interesting local museum. On display are some archaeological artefacts that were once scattered throughout the area. The main items include bas-relief pediments of the Champa and early Khmer kingdoms. 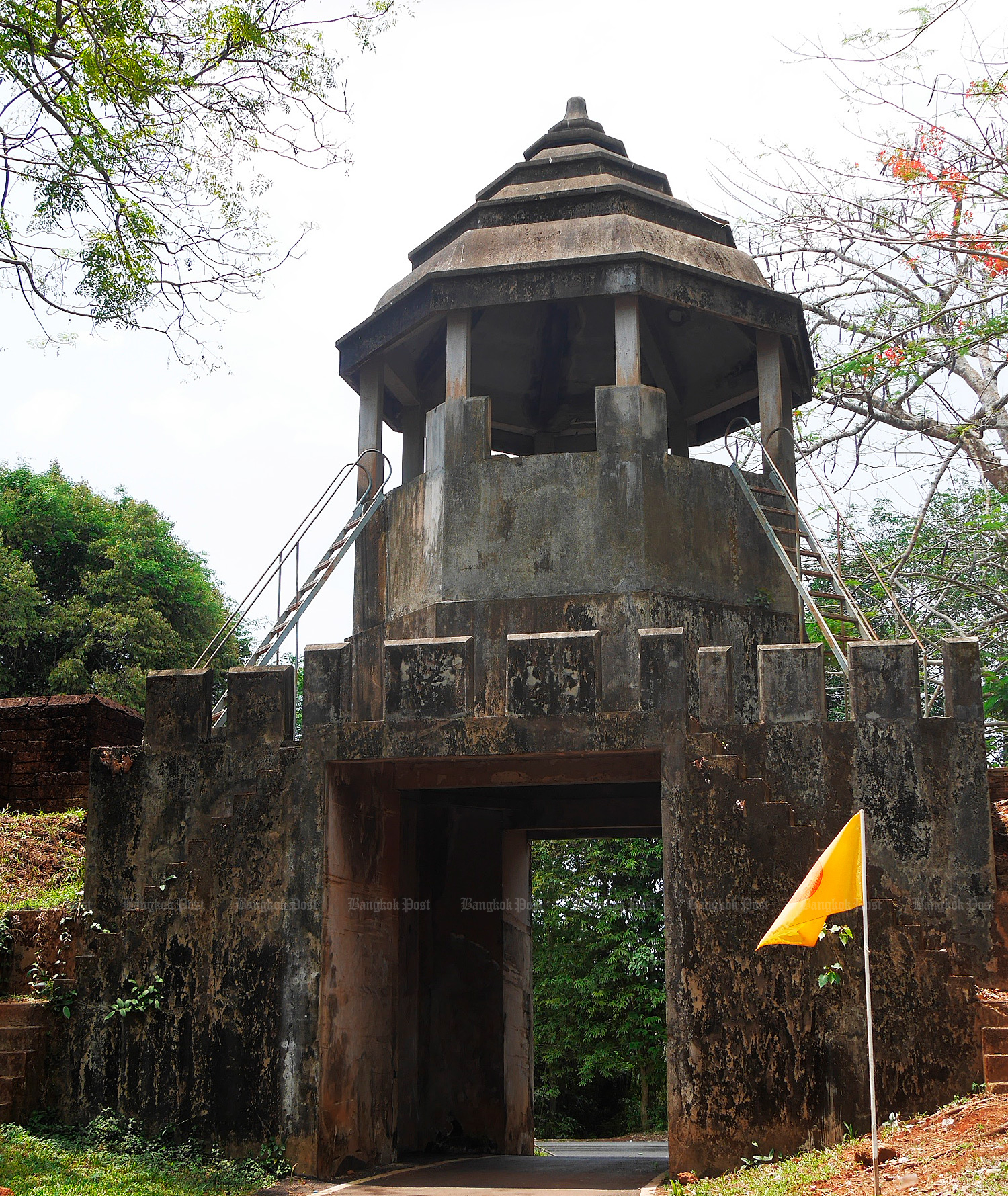 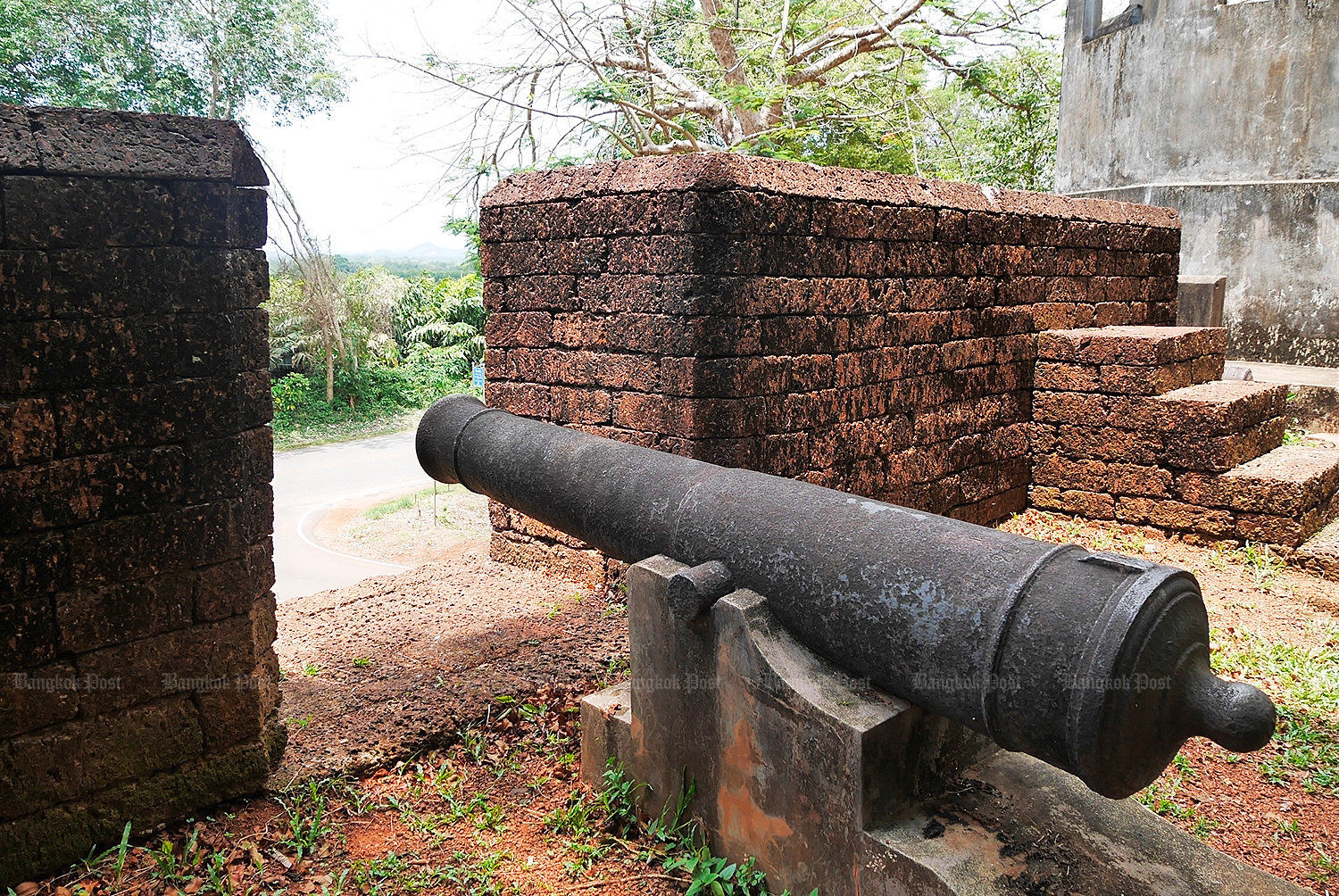 King Rama III made Chanthaburi a centre for Siam's naval forces during the wars with Vietnam. Noen Wong Fort was built during this period, along with construction of a new settlement and a fleet of warships for better defences. Nowadays, the compound also houses the National Maritime Museum. 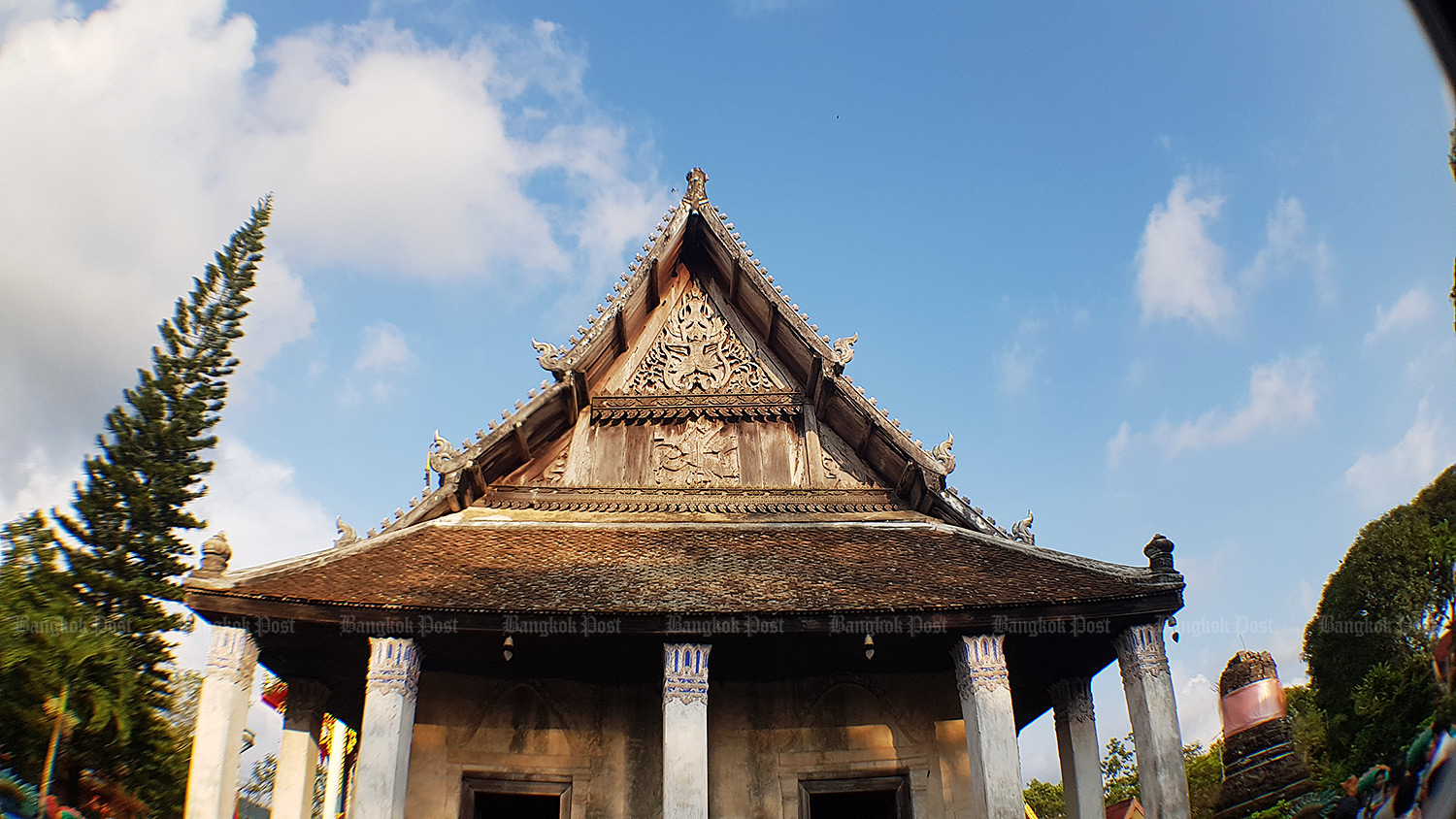 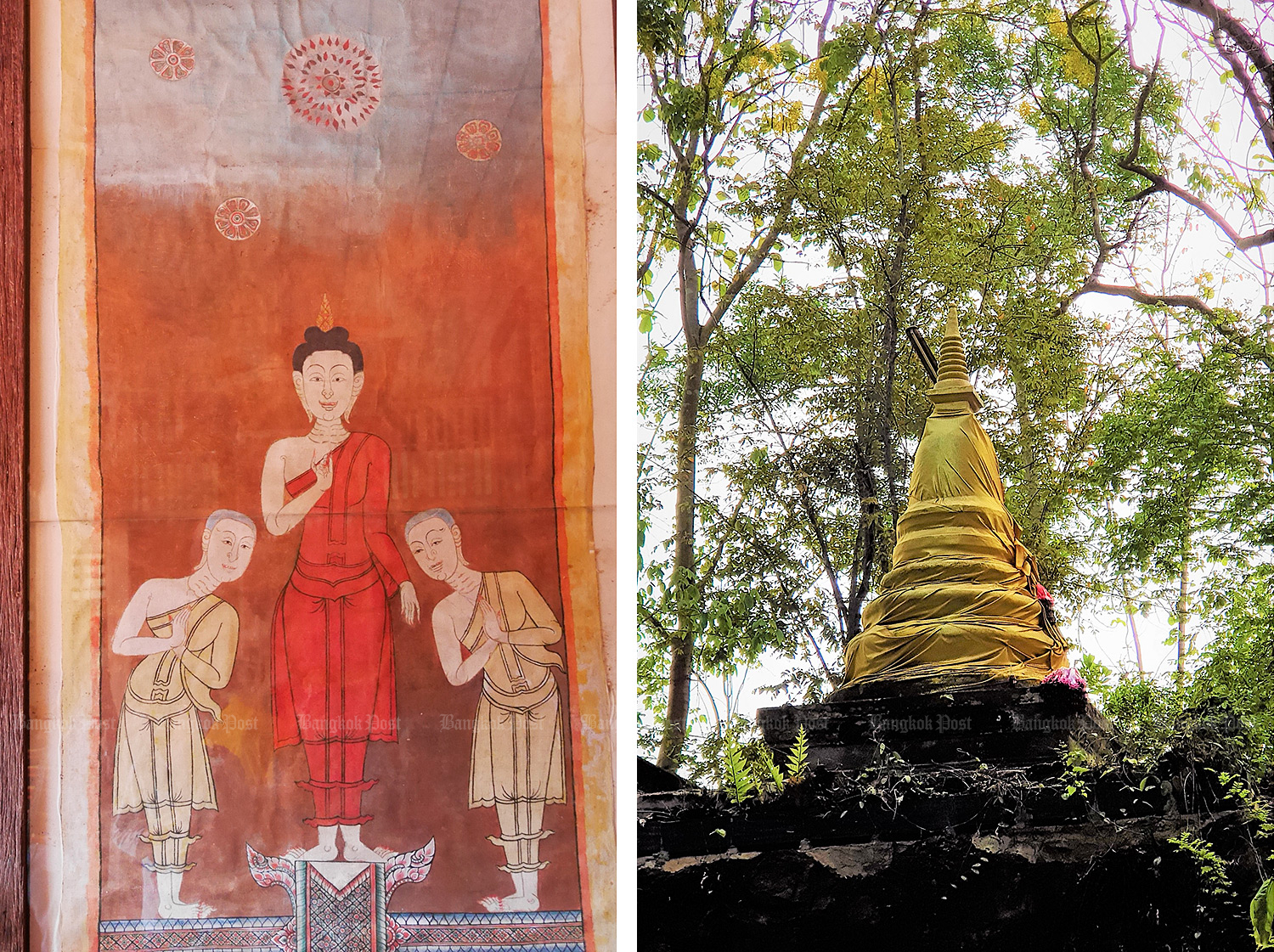 Many temples in Chanthaburi were built during the reign of King Rama III. The architects were locals but their designs show a strong Bangkok influence. Wat Tapon Noi in Khlung district is known for its intricately carved wooden gable and simple, yet charming mural paintings. At Wat Bo Phu in Tha Mai district, there is a rich collection of Phra Bot, religious paintings on fabrics for hanging on walls. At several temples, bell-shaped pagodas like this one on the left can be found. The architectural style was introduced by Bangkok aristocrats based in Chanthaburi during the Siamese-Vietnamese Wars of the mid-19th century. 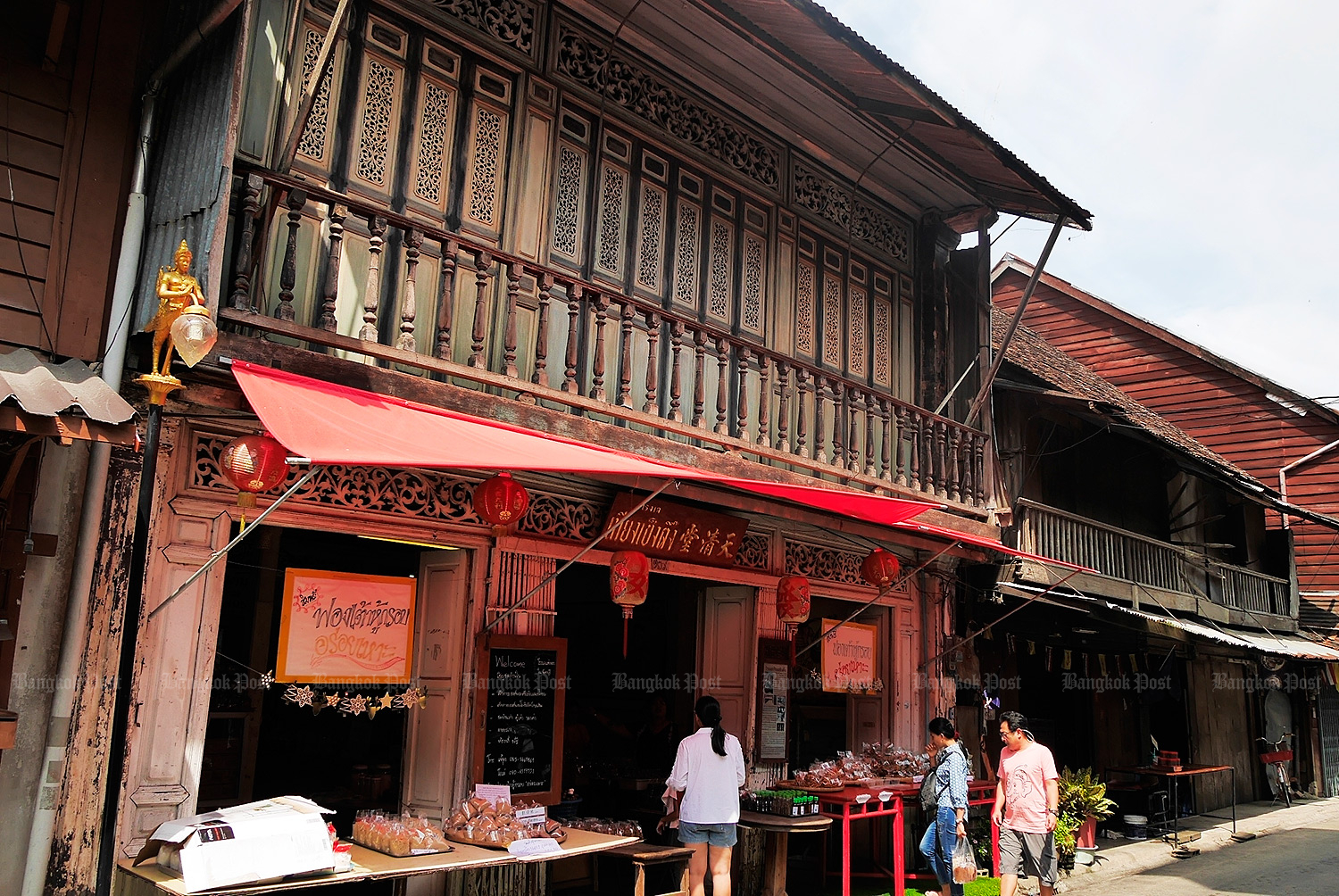 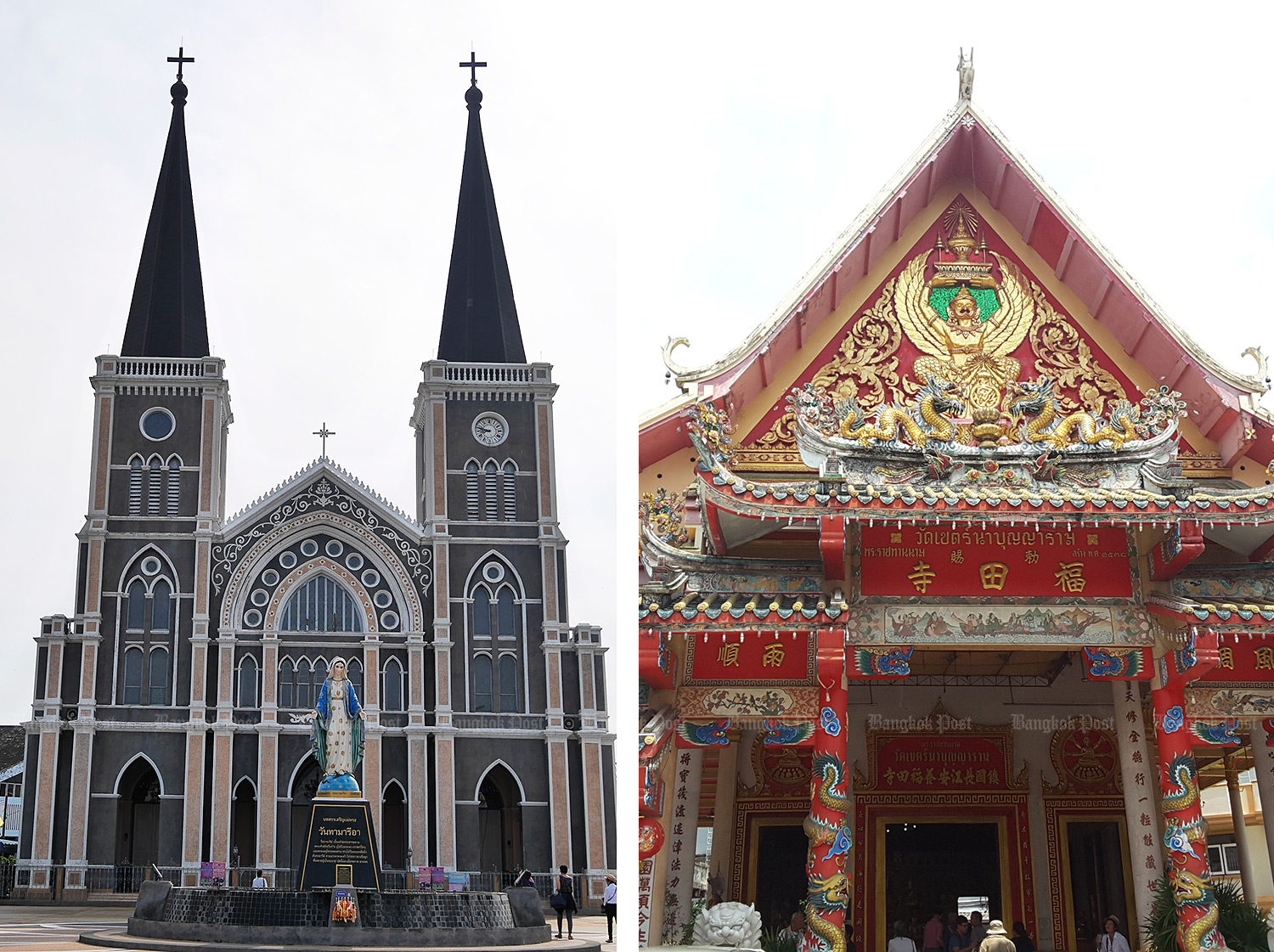 Chinese shophouses, a Catholic church and a Vietnamese Buddhist temple in Chanthaburi's old town by its namesake river attest to the rich cultural and ethnic diversity of the city.

The goal of the trip, he stressed, was not to debunk existing historical beliefs, nor to stir up nationalism. The point was to gain an understanding of the place we were visiting, the composition of its people, their way of life and their local history. The quest for knowledge is endless and we must keep asking new questions and making new discoveries. That is how we keep our passion for learning and how we keep our history alive and relevant to the present.

Who can argue with that?

Ajarn Srisak said that to understand the cultural landscape of any place, we must start by understanding its geography. Chanthaburi was once part of an ancient maritime trade route. It was a port of strategic importance not only for Siam but also for the Champa and early Khmer kingdoms.

A large number of artefacts from these ancient civilisations have been found in Chanthaburi. They are currently on public display at Thong Thua temple a few kilometres east of the town.

An ancient reservoir near the Buddhist temple also attests to Champa and Khmer influences. Nearby is a shrine to the Kawai Goddess of the Chong ethnic group. There is a popular local fable about her marriage to a foreign prince, reflective of marriages between locals and seafaring traders. North of Chanthaburi town, meanwhile, lies an ancient "kubo", or Muslim cemetery, indicating the long history of the Islamic community there.

Over the centuries, there were influxes of Chinese immigrants from the Mekong Delta to Chanthaburi and other cities along what is now Thailand's east coast. The large population of Chinese in the region helps explain why King Taksin, a Chinese descendant himself, decided to head east to gather support in order to rescue Ayutthaya. Chanthaburi resisted, so he had to attack, hence the destruction of the rice pots.

Thai history textbooks do not mention the role of Chinese immigrants in retrieving Ayutthaya from Burmese occupation. 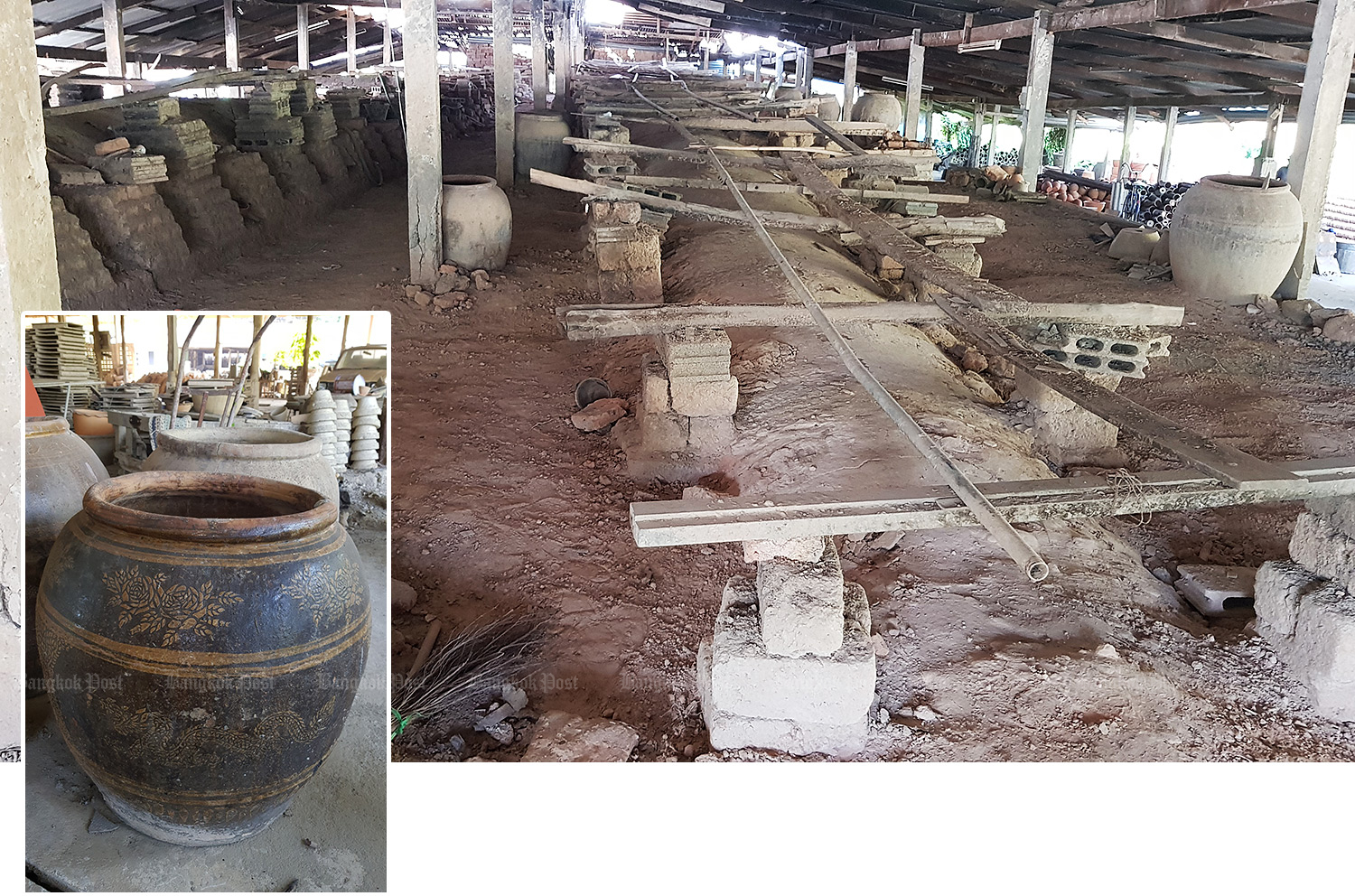 Tracing King Taksin's route to Chanthaburi along the east coast, we stopped at Ban Tao Mo community to see Thailand's oldest Chinese dragon kiln, an elongated kiln built on a slope to make high-fired ceramics. This ancient kiln technology came with the Christian Chinese from Vietnam who migrated to Siam in the early 19th century in search of religious tolerance. Ban Tao Mo became well-known for its high-quality dragon jars. Unfortunately, the declining popularity of the traditional water containers has forced owners to close down the kilns. 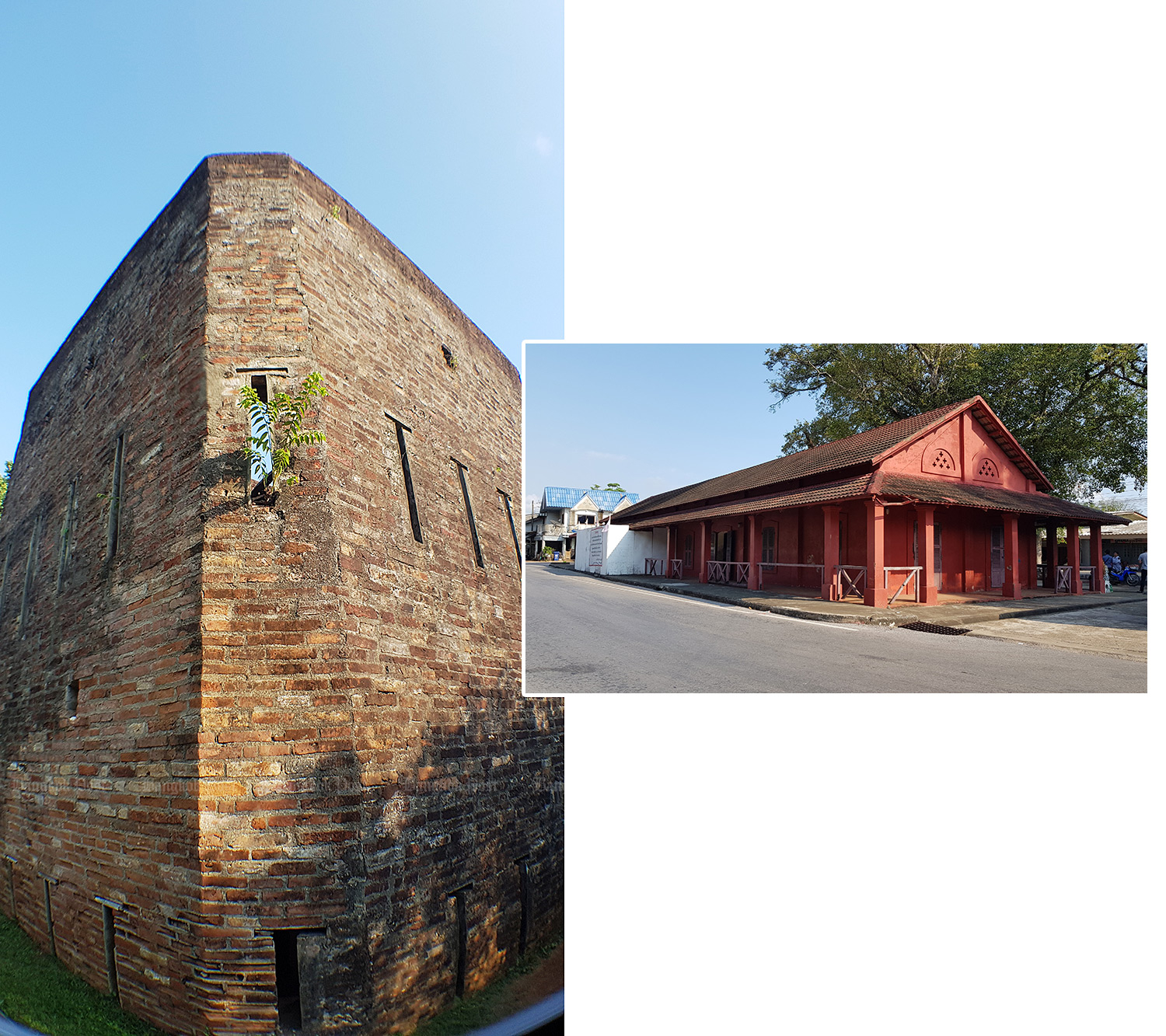 During the reign of King Rama V, the French army occupied Chanthaburi, a strategic port with easy access to Indochina, and built a complex of red buildings along Laem Sing Cape. The Khuk Khi Kai building, widely believed to have been a prison, was more likely a fort decked with guns for military surveillance.

In many coastal communities, the signs of the people's Chinese roots and the legacies of their immigrant ancestors are still evident. Many locals are descendants of Chinese Christians from Vietnam, as is the case in Ban Tao Mo, which means village of kilns. Settled by immigrants, the residents built elongated dragon kilns, ancient know-how from China, to produce dragon jars (jars adorned with images of dragons) and other ceramics.

Our journey along the coast also shed light on the importance of Chanthaburi as a port during Siam's wars with Vietnam between 1833 and 1847, during the reign of King Rama III. Highly-educated and high-ranking nobility were sent to Chanthaburi to build forts and warships. During that period, they also built temples and pagodas in the early Rattanakosin style, now among Chanthaburi's many charms.

During the reign of King Rama V, Chanthaburi's proximity to Indochina made it an easy target for French imperialist forces. The struggles of Siam to fend off Western colonialism was one of the most painful periods of the Rattanakosin Era.

Over the centuries, Chanthaburi has seen waves of settlers from different backgrounds. These people contributed to the vibrancy and diversity of the area. The story of Chanthaburi is one marked by an openness to the outside world. It is also essentially the story of Thailand, a crossroads of different cultures through the ages.

If the tourism industry pays heed to the cultural landscape of a destination, like in this Chanthaburi trip, it can help open hearts and foster respect for ethnic and cultural diversity -- a key factor in peaceful coexistence.

That is when tourism can really make a difference.

Chanthaburi is almost 240km southeast of Bangkok. While some of the places mentioned in this article are located within the main town, many others are in outlying areas, making private car the most convenient way to travel. If you do not wish to drive all the way from Bangkok, you can take a bus from Ekamai Eastern Bus Terminal and use a local van once you get there. Ask a friend who knows Thai to help you search online for a rental van in Chanthaburi. It's much easier than doing so in English. 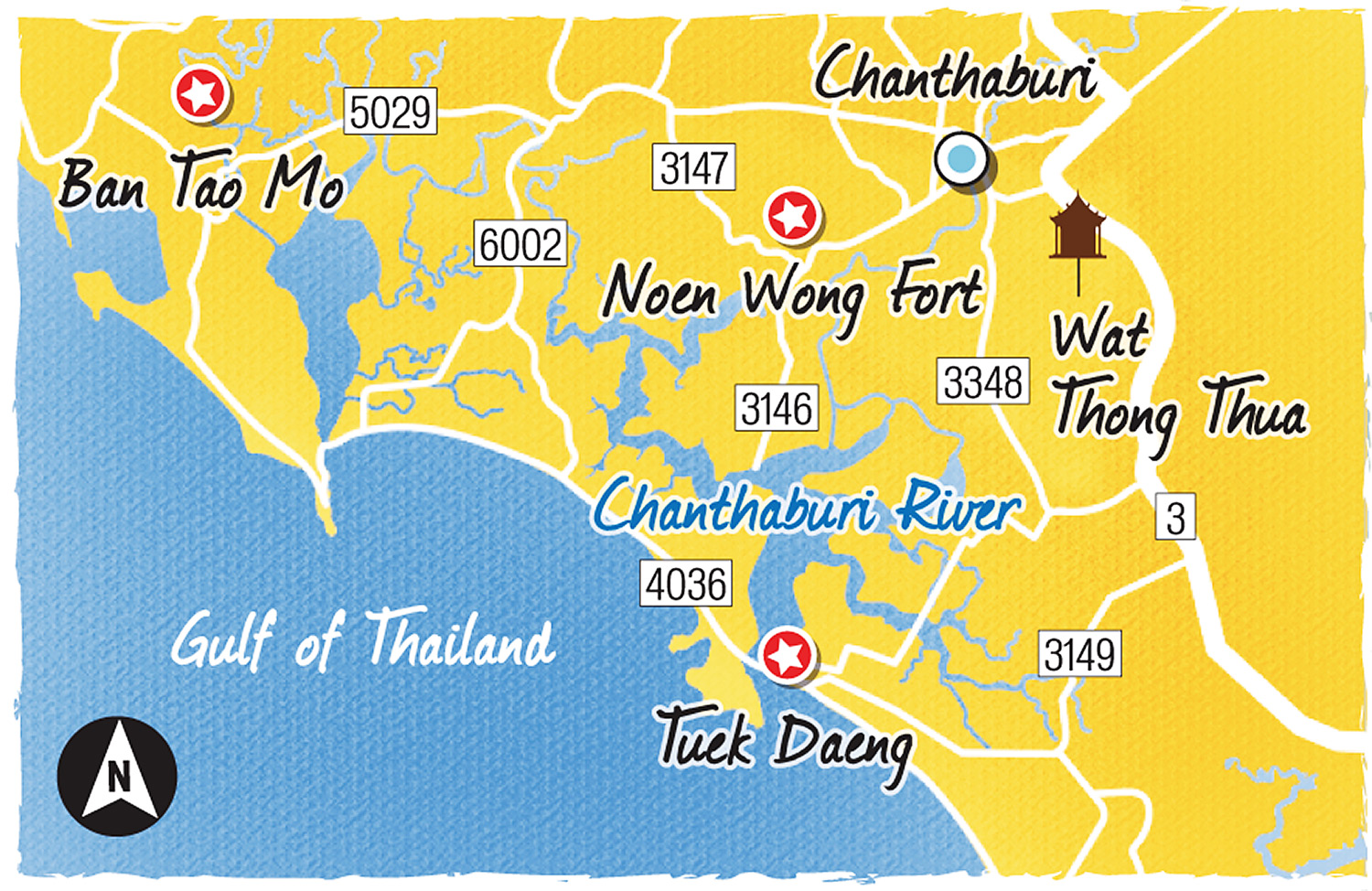