Jaipur, the capital of India's Rajasthan state, is a stunning spectacle of colour and chaos

It's normal to see oxen on the streets of India. However, during my recent trip to Jaipur, I was surprised to see people riding camels and elephants on the other side of the road, while our minibus was stuck in traffic alongside public buses, cars, horse carriages, rickshaws and swarms of motorcycles. 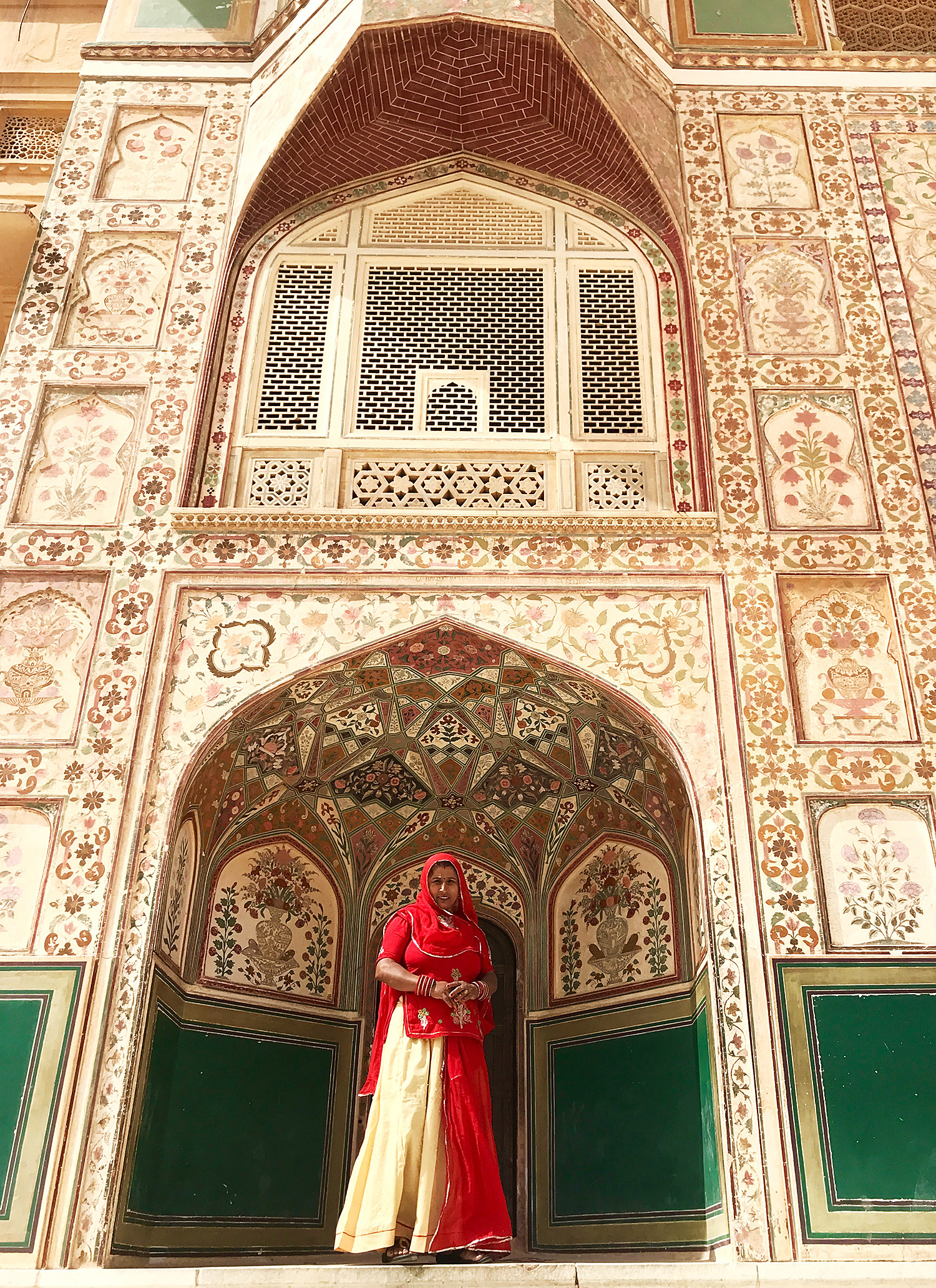 A tourist at Ganesh Gate, the main entrance to Amer Palace. Overhead is the Suhag Mandir, chambers for court ladies to observe state functions or celebrations without being seen. Visitors can take a staircase to the upper floors and peek through the latticed windows of the chamber to the courtyard below.

The instruction "horn please" was a common sight on the back of pickups and trucks. Like other cities in India, honking horns is a popular pastime. Drivers do it while overtaking, or warning pedestrians that they will not stop to let them cross the street at a zebra crossing, or because they're bored, or because they just like the sound, presumably.

And yet, despite the chaos of its streets, Jaipur really is a gem. Its nickname, the Pink City, is well earned: the colour dominates the old town and its splendid forts, palaces, temples and museums.

"Jaipur is a renowned historic city. It is also known as the first planned city of India," said Shalee, our guide.

Located about 260km from New Delhi, Jaipur is the capital of Rajasthan state. The city is one of India's most popular tourist destinations, and completes the Golden Triangle tourist route along with Delhi and Agra. 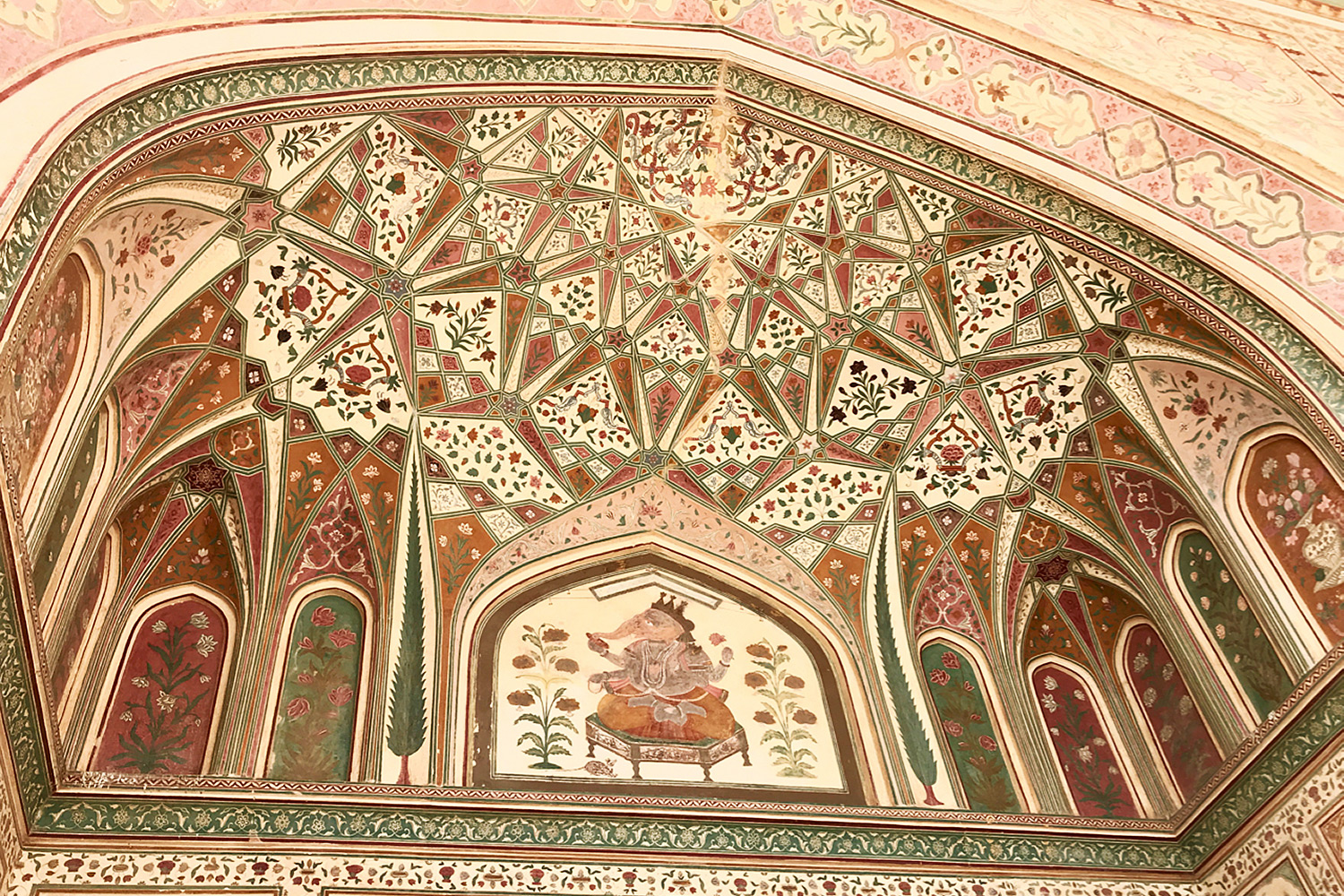 The murals on Ganesh Gate are frescoes, pictures painted while the plaster on the walls is still wet. The method helps give the paintings longevity. At the top is a picture of Ganesh, the elephant-headed Hindu god. It is believed that Lord Ganesh has the power to remove obstacles for humans. As a result, his picture is always painted over the main entrance to a building.

"Maharaja Sawai Jai Singh was a remarkable ruler. He was also great in mathematics, architecture and astronomy," Shalee told us. Some of his innovations remain, including the Jantar Mantars, gigantic sundials, of which five were built throughout northern India.

"Jaipur is divided into two areas. Old Jaipur is the area surrounded by a 9.8km wall and forts. The wall is about 7m tall and 2.5m thick with eight gates. The area outside the wall is New Jaipur," our guide explained.

Originally, the buildings in Old Jaipur weren't pink, but white or eggshell. These original colours can still be seen at the royal residence inside the City Palace. Jaipur was painted pink in 1867 when Maharaja Sawai Ram Singh II wanted to impress his royal guest, Prince Albert Edward (later King Edward VII of England). 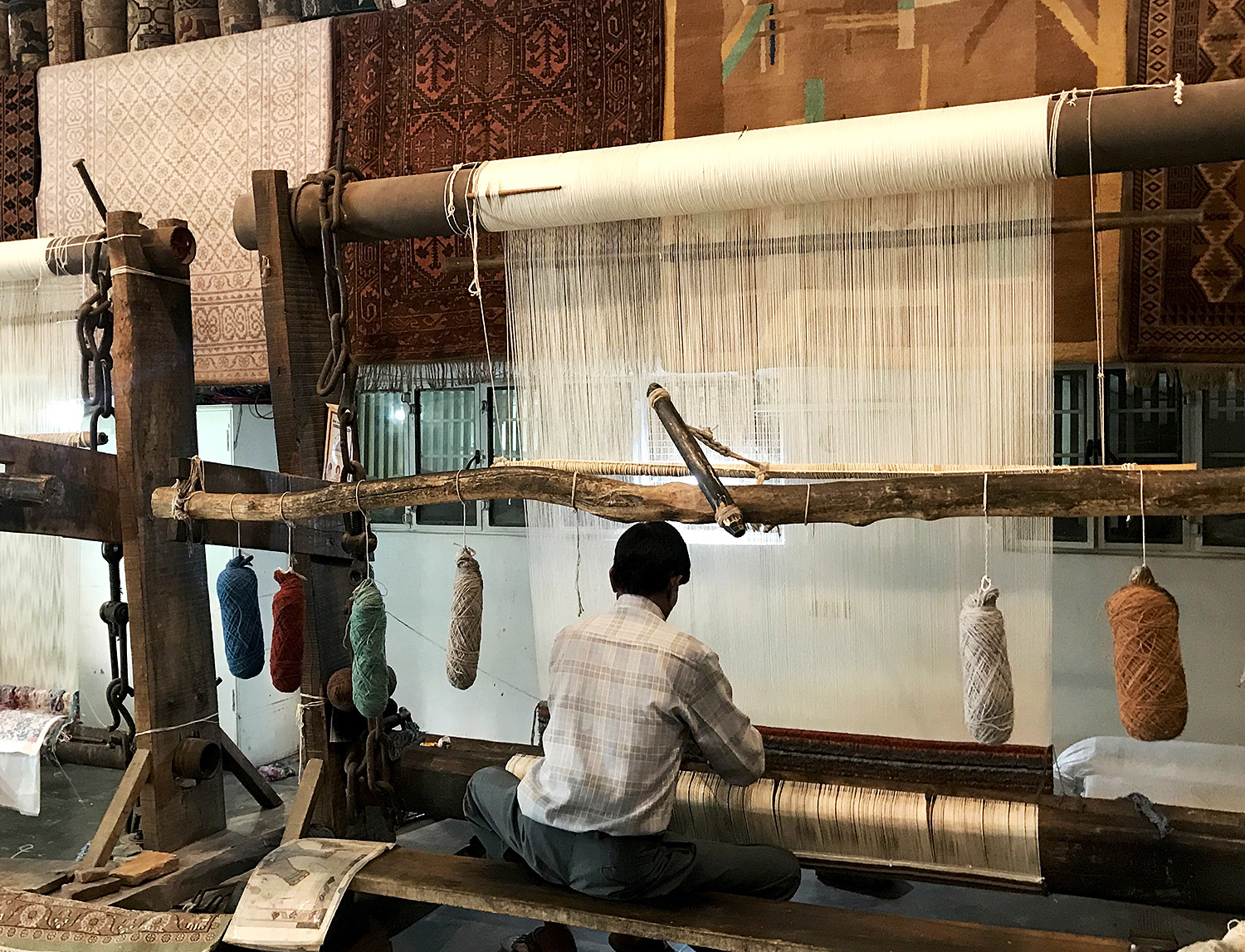 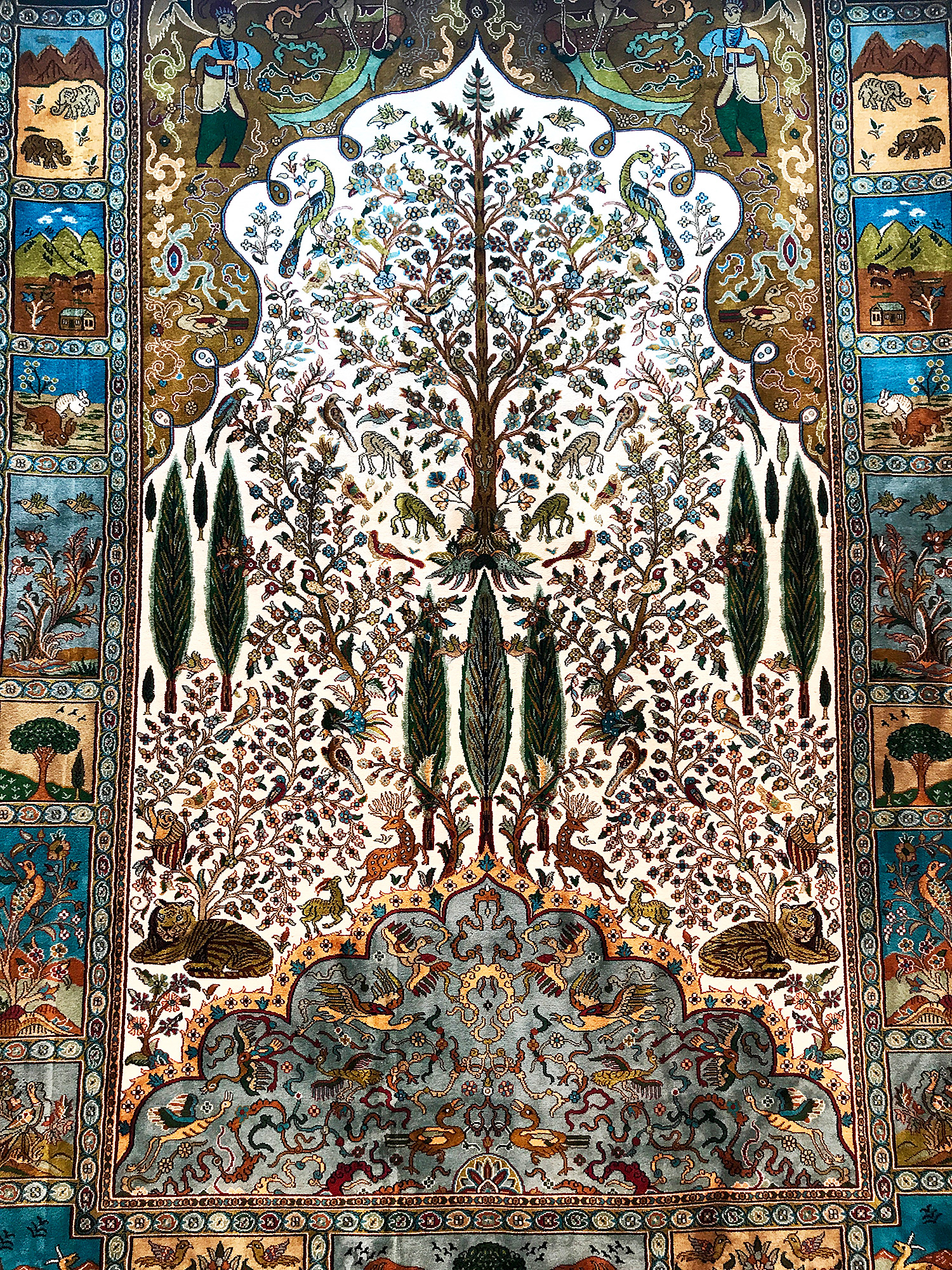 Jaipur is famous for its handmade camel rugs and hand rock printing textiles. The fabrics look similar to Batik, but the patterns are created using a stamp printing technique. They required skilled craftwork to ensure the colours do not overlap. The rugs are made by weaving natural camel wool yarn. Before starting each line, the weaver will read the pattern out loud in a rhythmic chant. He then skilfully weaves the yarn from one end to the other, repeating the same process with each line until finished. One selling point of camel hair rugs is that they do not burn easily.

"[Pink] is traditionally associated with hospitality because it is the colour of a Hindu priest's robe. People say it's pink, but in fact the colour is terracotta," Shalee said. Jaipur's status as the Pink City is considered an essential part of its identity. By law, buildings in the old city must adhere to this colour scheme.

To find out more about the area and its fascinating history, we first headed 11km out of the city to Amer, the seat of kings before the capital was moved to Jaipur. This is home to the majestic Amer Palace (also known as Amer Fort), built in 1592 on a foothill, facing Maota Lake.

The palace was constructed using pink sandstone and marble in a blend of Hindu and Muslim architectural styles. It consists of four main sections, each divided by gates and with its own decorative courtyard.

One of the highlights is the Sheesh Mahal or Mirror Palace, with its remarkable mirrored walls and ceilings. Visitors are not allowed to go inside but can walk around the exterior to observe the beautiful decorations.

Left: Not far from the City Palace is the Hawa Mahal or Palace of Wind, which was built in 1799 as an extension to the City Palace for court ladies to watch royal processions and celebrations on the street, or just observe people going about their daily lives. The five-storey structure was built in the form of the crown of Hindu God Krishna and has a total of 953 small windows. 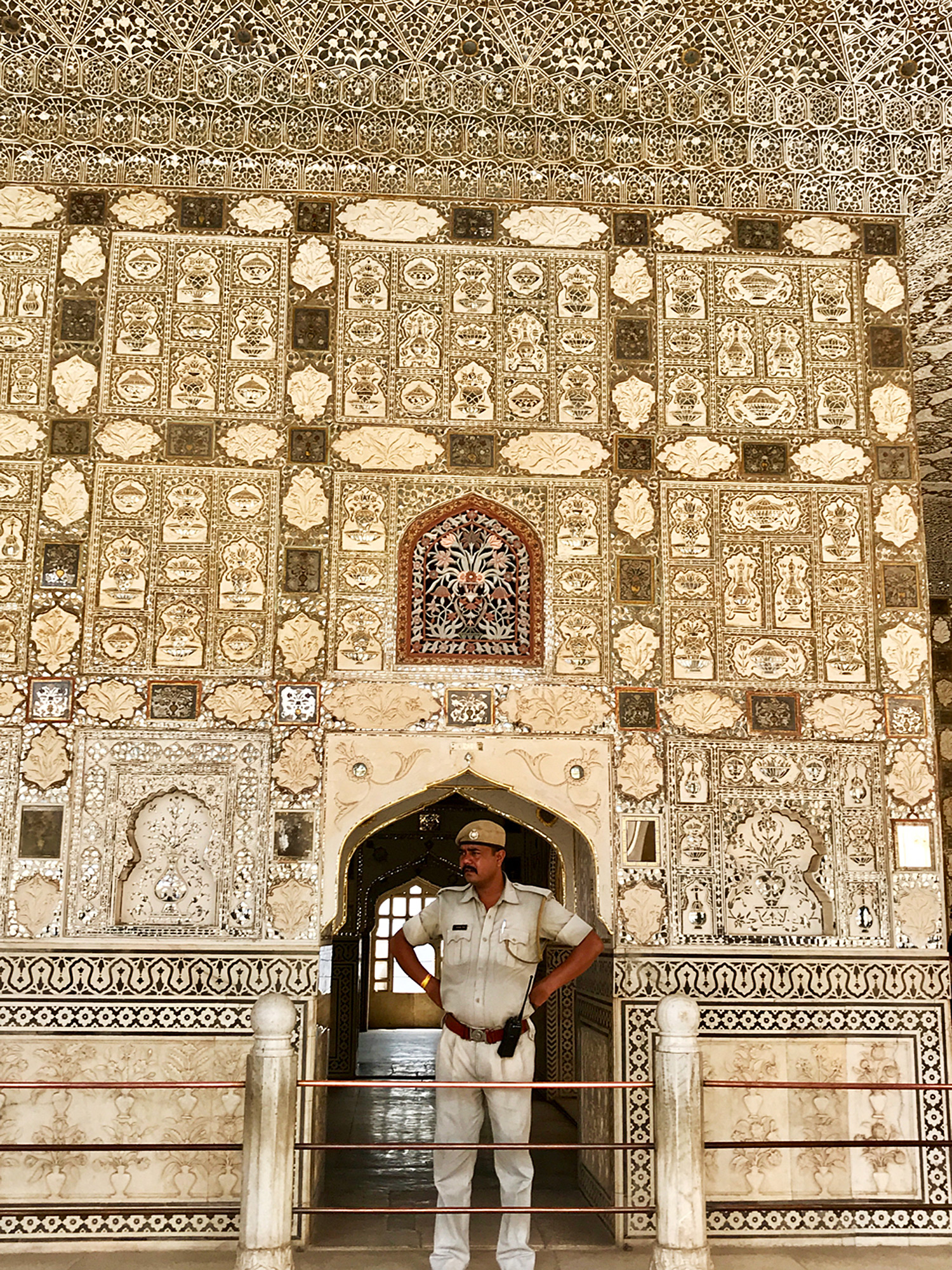 Inside Amer Fort is the Mirror Palace, also known as the Winter Palace. Each chamber has a low ceiling with a mirror in the centre to reflect lamp light, helping to keep the room warm. Most of the mirror glass originally used was imported from Iran, but today about 50% of the mirrors are new. Opposite the winter palace is the summer palace. In the past, when the royal family stayed there, wet curtains were hung at the entrance of each chamber to help keep them cool.

Amer Fort is huge and boasts a dizzying array of beautiful art and architecture. You could spend at least half-a-day there.

On the way back to Jaipur, we made a quick stop to see the Jal Mahal or Water Palace, which sits in the middle of the man-made Man Sagar Lake. It was built by Maharaja Sawai Pratap Singh in 1799 as a lodge for the king and his company during duck hunting trips. The building has five storeys, three of which are submerged. The palace is closed to the public so we could only observe it from the bank. Still, it makes for quite a sight.

Back in Jaipur, we visited the Jantar Mantar. The one in Jaipur is the largest and best-preserved of the five built by Jai Singh II. It consists of about 20 fixed astronomical instruments. Each structure was built to calculate time, predict eclipses and observe the orbits of the planets.

"The site was once a school for teaching astronomy," said our guide.

The Jantar Mantar is well worth a visit. I haven't seen anything like it anywhere else. Unsurprisingly, it is listed as a Unesco World Heritage Site. 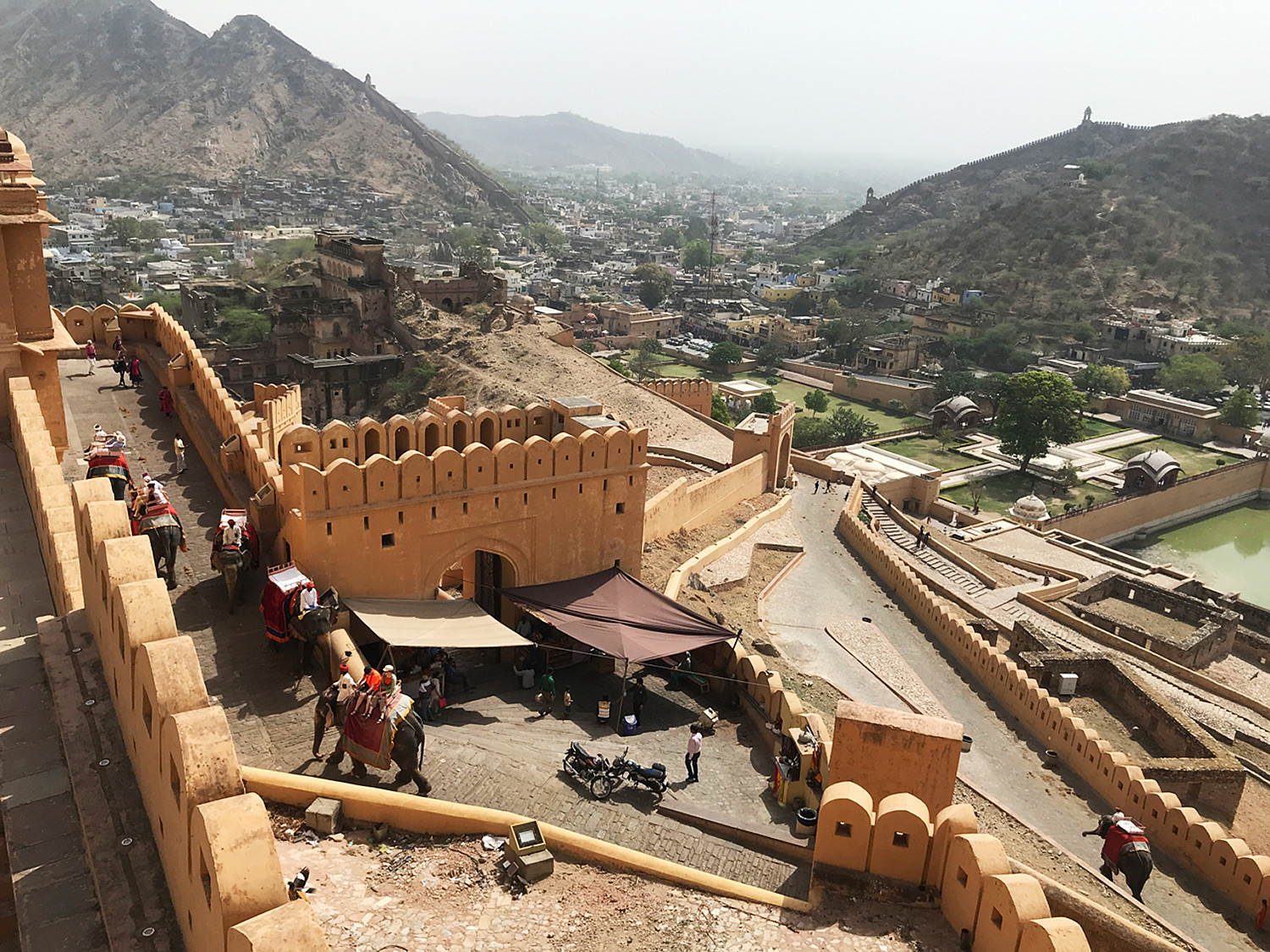 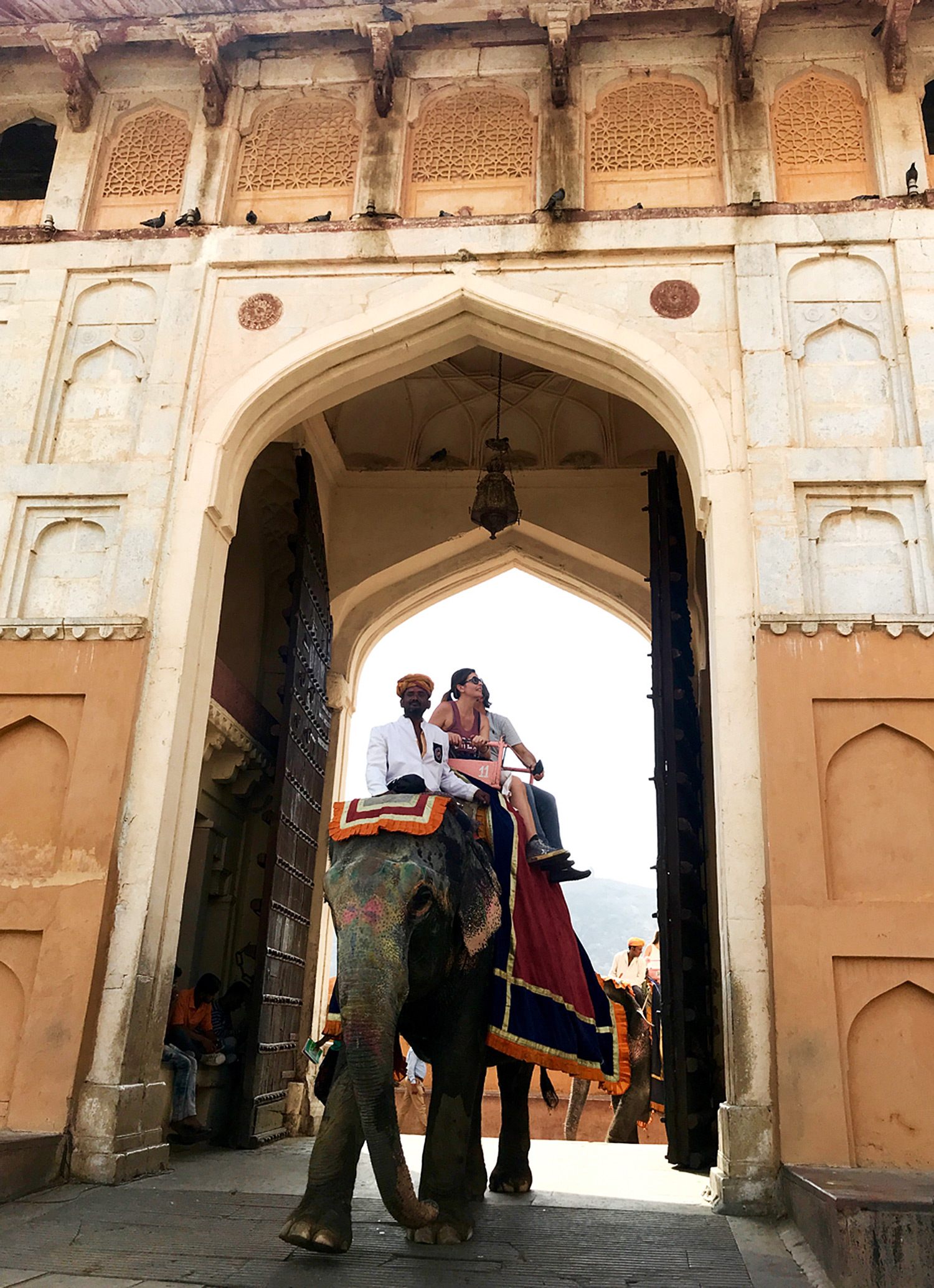 Elephant rides are provided from the entrance gate of Amer Fort. The 15-minute ride takes visitors to the palace gate. Alternatively, you can walk or take a jeep.

No visit to Jaipur is complete without a trip to the City Palace. This massive complex takes up as much as 15% of Old Jaipur and is still the residence of the Maharaja of Jaipur and his family.

"The king's name is Maharaja Sawai Padmanabh Singh. He is 20 years old," Shalee told us.

Although not officially recognised by Indian law, the title of Maharaja is still preserved to show respect. The current Maharaja received his title in 2011 after his grandfather Sawai Man Singhji Bahadur passed away. (The title was not given to his father, a commoner.)

The City Palace is open to the public, with the exception of the royal residence. Maharaja Sawai Mansingh II Museum, the first attraction you come to after entering the gate, houses a vast collection of royal costumes, including those of Sawai Madho Singh I (1728-1768) who was said to be 2m tall, 1.2m wide and to weigh 250kg. The dimensions of his outfits have to be seen to be believed. Unfortunately, photography is not allowed inside the museum.

Another interesting spot is the Hall of Private Audience. Today, the marble hall is a gallery. The most notable items among its collection are two huge silver jars, listed in the Guinness Book of World Records as the largest silver objects in the world. Each jar was made out of 14,000 silver Jaipur coins. They are 1.6m tall, weigh 345kg and can hold over 4,000 litres of water. The jars were made to store water from the Ganges River for the king to consume during his trip to England in 1902 to attend the coronation ceremony of King Edward VII.

"As a devoted Hindu, the king preferred using water from the sacred river to English water," said our guide.

Although Shalee assured us that we had covered the main tourist highlights of the city, we still felt our stay was too brief and that there was still so much more to see and explore.

"If you want to revisit us, you should come during the cold season, from early November to February. You will have pleasant weather with clear blue skies and that will make the pink city much more beautiful," Shalee said. 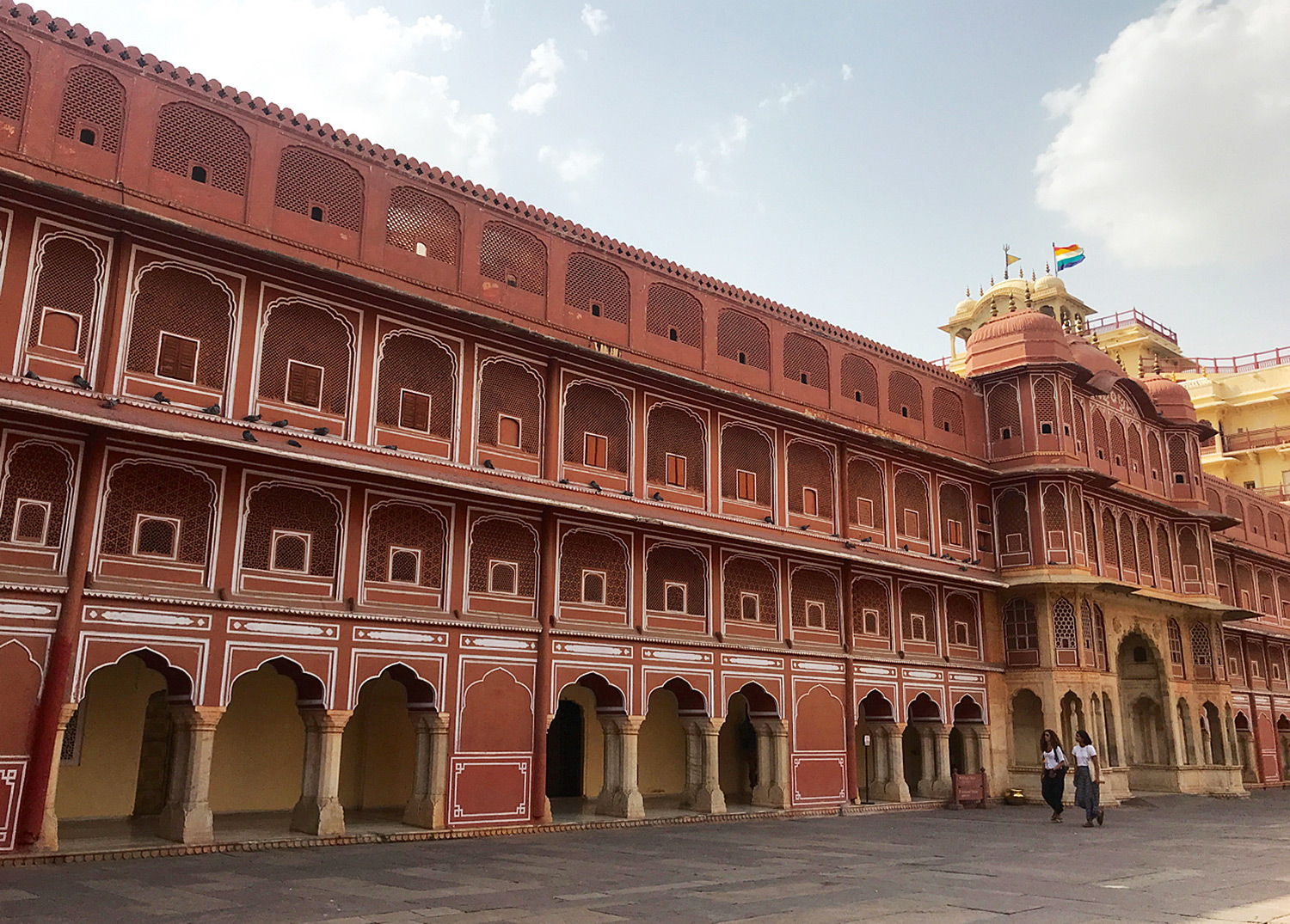 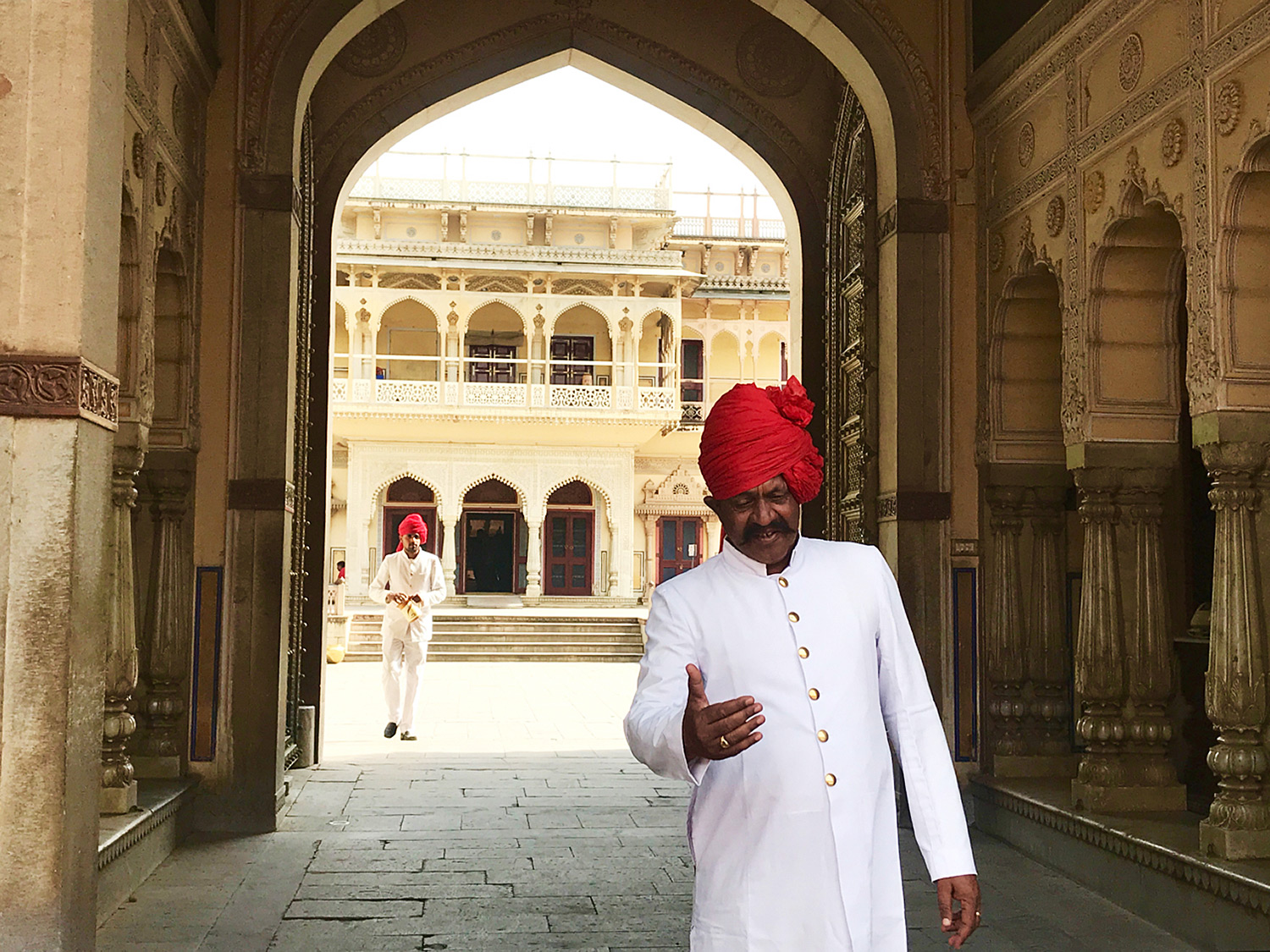 The City Palace houses five galleries featuring about 25,000 works of art, including textiles, paintings, arms and silverware. The Jaipur royal family live in the seven-storey palace Madho Niwas. This is closed to the public, but the grand residence of the Maharajas of Jaipur, the Chandra Mahal, can be visited with a special ticket, which comes with an exclusive guided tour. 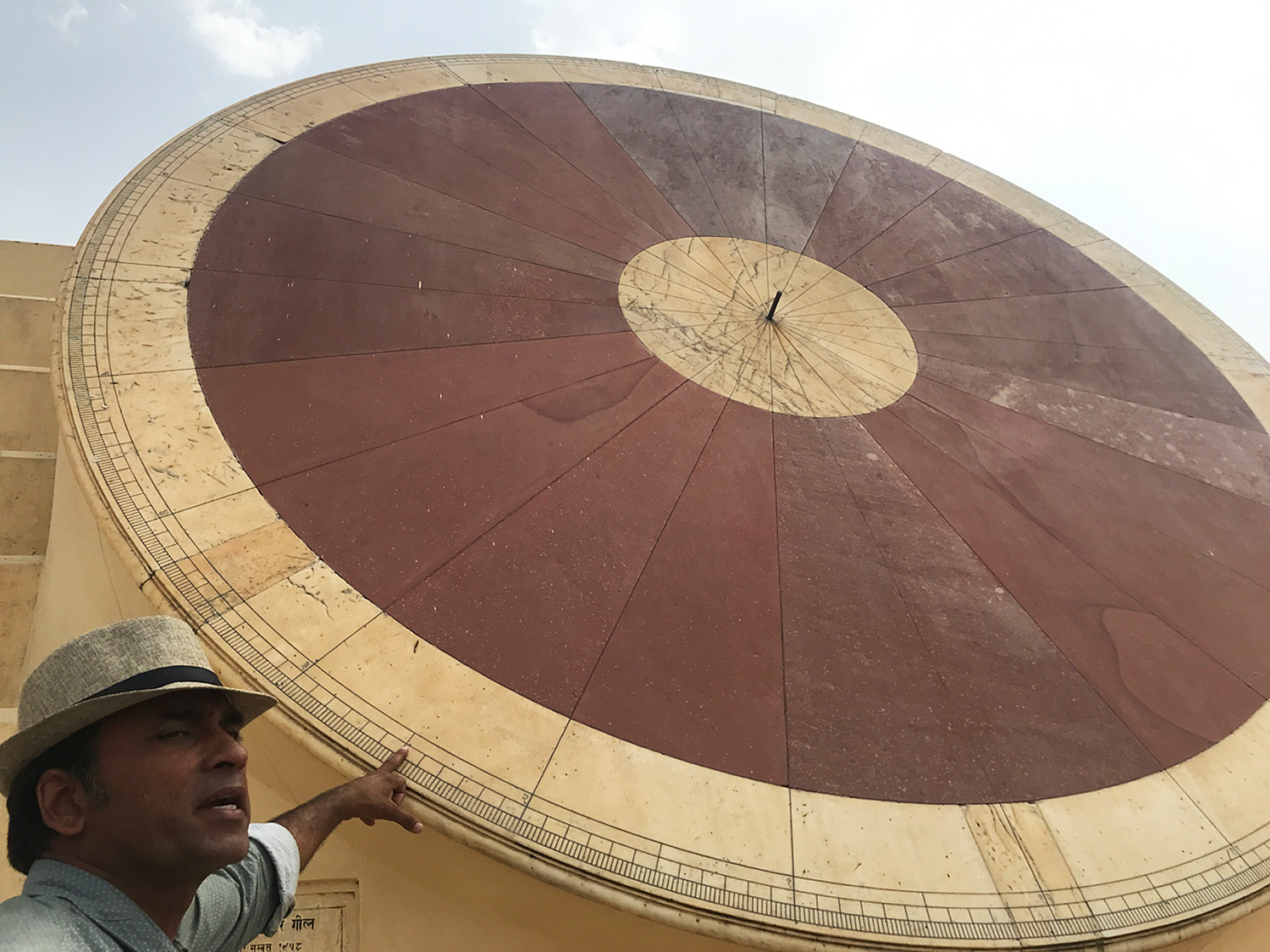 Jaipur’s Jantar Mantar is the largest astronomical observatory site in India. Jantra means instrument and mantra means calculation. It was originally built almost 300 years ago and underwent significant renovation in 1901. 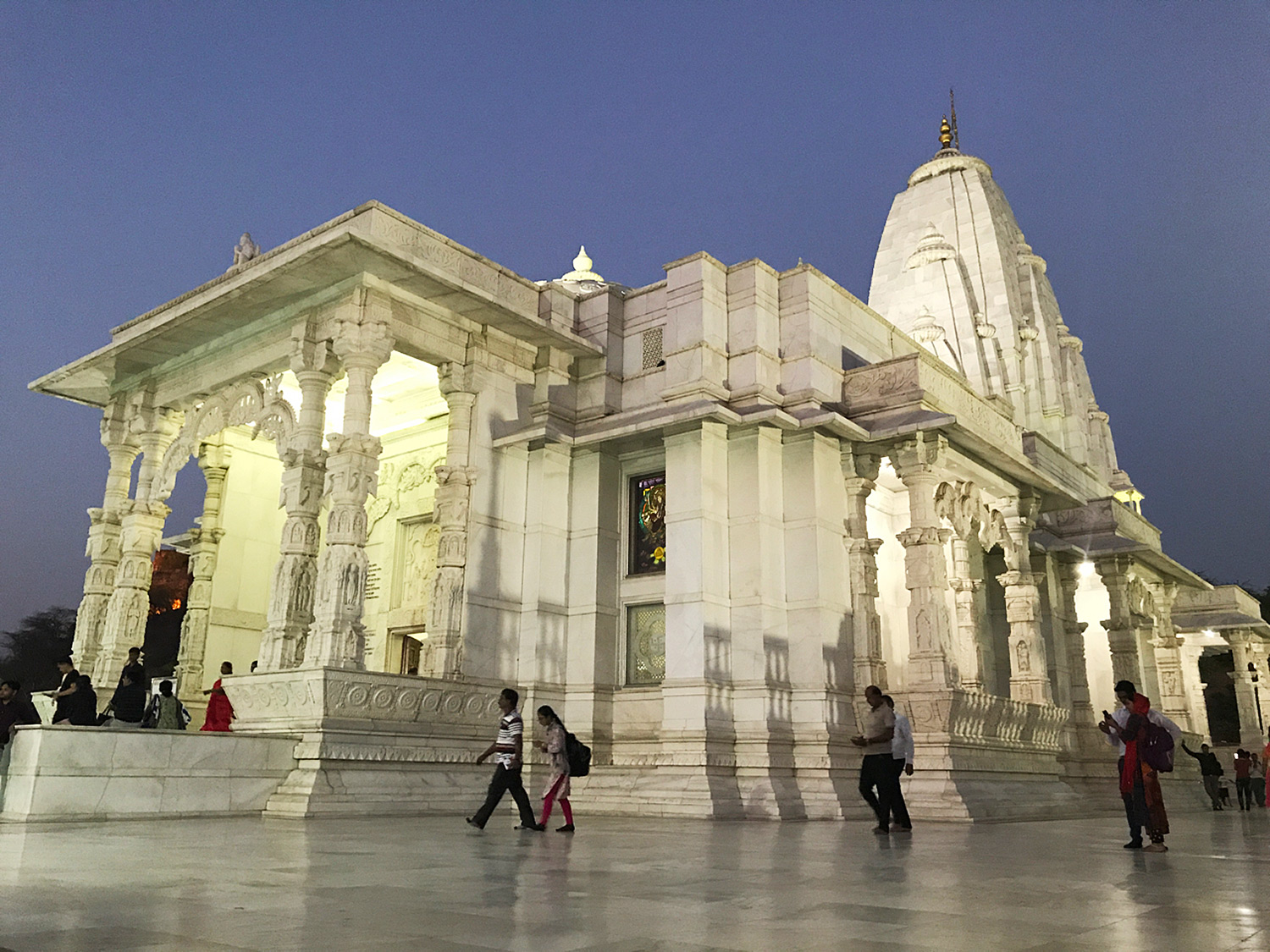 Lakshmi Narayan Temple, or the Marble Temple, is a popular spot to see the sunset over Jaipur. The temple, built in 1988, is situated on a hill and built entirely of white marble. It is dedicated to Lord Vishnu and Lakshmi, the goddess of wealth and good fortune. 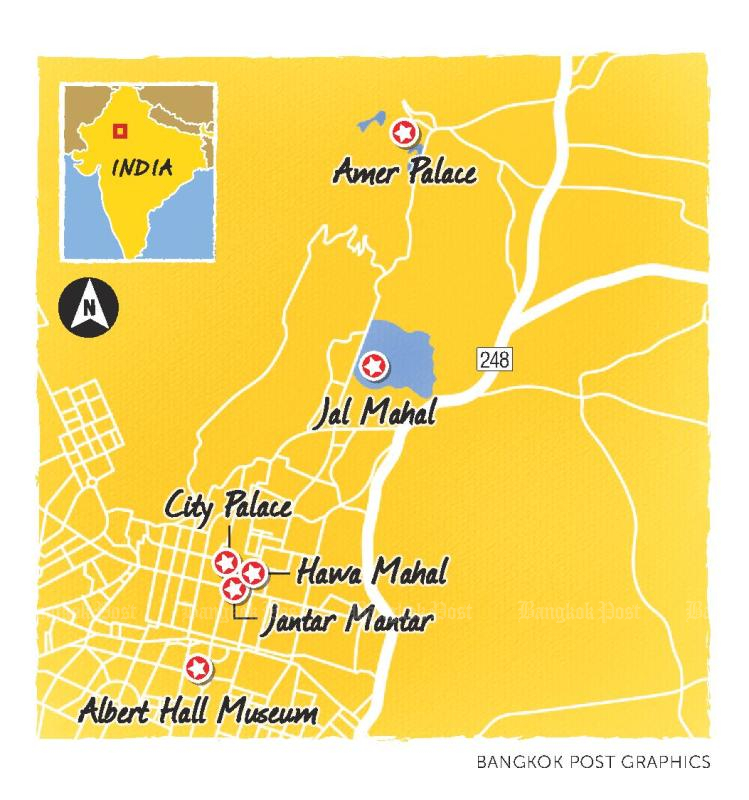