Worshipping at the temple of community unity
Thailand
Special Report

Worshipping at the temple of community unity

published : 13 Jul 2019 at 06:00
newspaper section: News
writer: Chaiwat Satyaem
Vendors dressed in traditional attire at Rom Boworn Weekend Market in Samut Songkhram sell fruit within the premises of Wat Pradoo, which is at the centre of the communities there. The temple houses a museum exhibiting items of antiquity while the market organises folk performances that are popular with visitors.

Temples have always been at the centre of our communities. The word boworn, for instance, was coined a long time ago to describe the close-knit relationship between homes, temples and schools.

The word boworn itself can be broken down into three parts -- bor, which refers to baan, or homes; wor, which represents wat, or temples; and ror, which connotes rong rian, or schools.

The term has even been adapted as the name of a market in Samut Songkhram, as it represents the idea of homes, temples, and schools as being interconnected to one another to drive the economy, which in turn, generates income for the community.

As such, it is no coincidence that the Rom Boworn Weekend Market is located within the premises of Wat Pradoo, which was built over a century ago during the reign of King Chulalongkorn.

"Rom literally means an umbrella or a parasol," said Ekkachai Ployhin, the market's caretaker. "That said, it is also a metaphor for our communities, which are bound together by our boworn -- our homes, our schools, and our temples."

The temple itself is considered by local residents as a uniting force. It is located on the Samut Songkhram side of Khlong Pradoo, but it is connected to the Ratchaburi side of the khlong by a wooden bridge which starts right on the doorstep of the temple -- literally bridging the gap between both communities.

In December last year, Phra Phawana Wisuthisophon -- the temple's abbot, who is widely revered by local residents -- floated the idea of putting the vacant lot on Wat Pradoo's premises to constructive use. He decided to open a market, so local residents could earn a living from small-scale trading. Rom Boworn Market, as it is popularly known, proved to be an instant attraction for tourists on account of its "retro appeal". 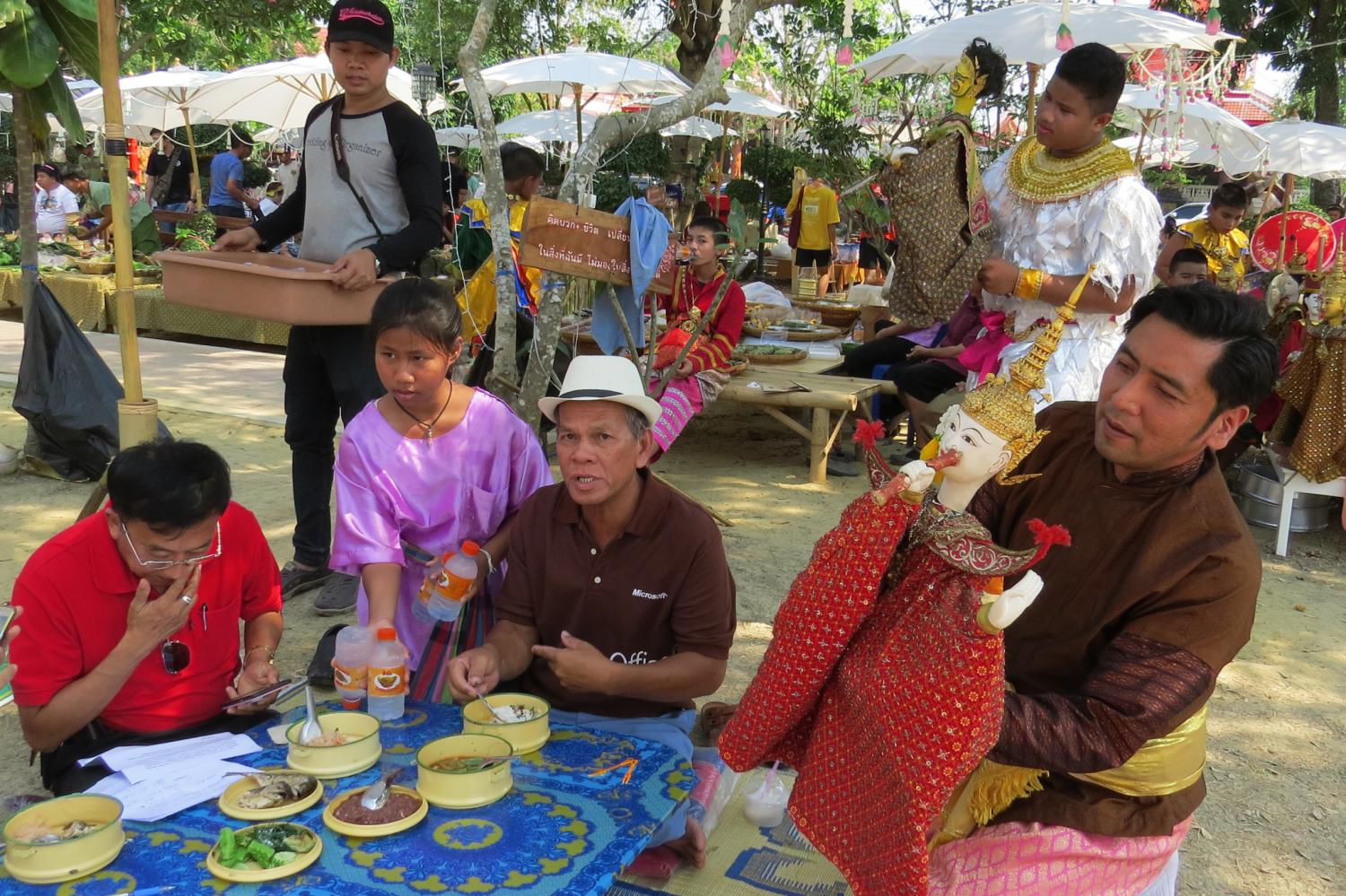 Food offered at the market is served with environmentally friendly utensils, such as pinto, or tiffin food carrier.

Indeed, the abbot wanted visitors to feel like they are walking down memory lane. Market vendors don clothes that resemble those worn during the era of King Chulalongkorn, or the Fifth Reign. Food stalls hawk traditional fare, which are served with earthen utensils -- similar to those used more than a century ago.

"Visitors can also sit on bamboo benches to eat or rest," said Mr Ekkachai, before adding that the abbot said that the abbot wanted local residents to be productive instead of sitting idly at home.

"While the parents set up shop at the market, their children can come and help out."

Indeed, the market features a stage where children put on traditional performances that they learnt at school, which ranges from puppetry to musical performances, as well as garland-making among others.

Mr Ekkachai said that the market is capitalising on Wat Pradoo's history, which King Chulalongkorn visited during his reign. "The king travelled by a royal boat up the canal to the temple because he held Luang Phoo Jaeng, the temple abbot that that time, in high regard," he said. 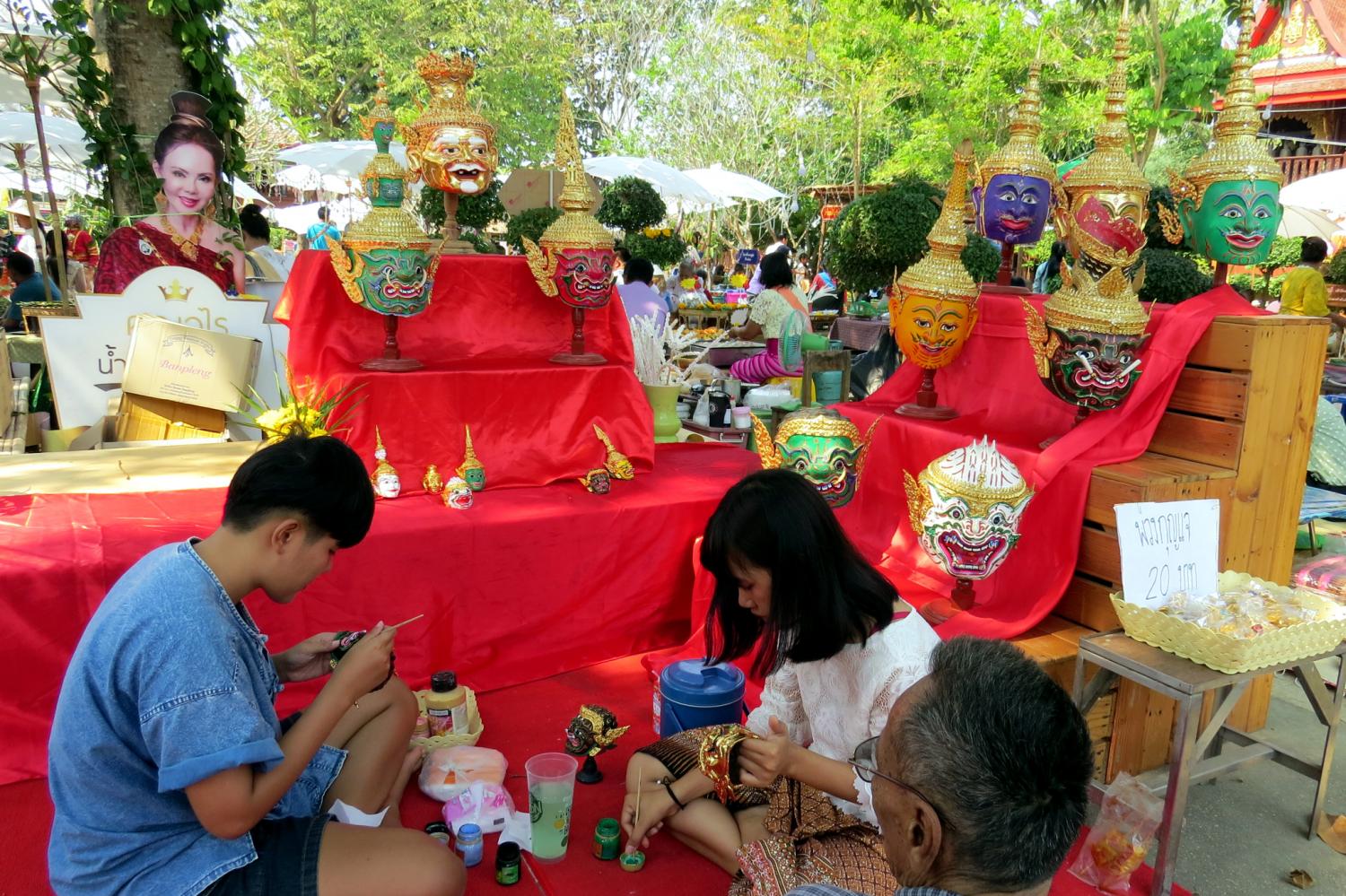 Local residents show off their skills in crafting masks at the market. photos by Chaiwat Satyaem

To this day, several items associated with the royal visit are still exhibited at the temple's museum -- a monk's satchel, talipot fans, a kettle, the lid of an alms bowl inlaid with mother-of-pearl and several pinto, or tiffin food carrier.

In 1998, the abbot of Wat Pradoo also commissioned the construction of a pavilion to house the royal boat -- which was dug out from a large takien tree -- which King Chulalongkorn used to visit the temple.

It was donated to the temple, and it remains as one of the most-visited exhibit at the temple museum.

Jirasak Uam-urai, the director of Samut Songkram provincial tourism office, said that Rom Boworn Market is an interesting example of a market that came to be because of the collective effort of local residents.

"It is a locally initiated and implemented project," he said. "A grassroots initiative that is aimed at improving the lives of local communities."

For example, the temple handed out the many pinto it owned to the vendors for use as food containers, which resulted in a considerable cut-down on styrofoam boxes.

"Many tourists were impressed by the atmosphere and gastronomic offerings at the market," he said. "But what deserves true admiration is how the entire boworn came together."

"Members of the communities decided they wanted to make a new tourist attraction with their own bare hands, and they did," Mr Jirasak said.

The market was built without any aid or sponsorship from outside of the two communities.

Not only that, local residents also managed to set the market apart from other similar markets by looking deep into history and using it as a selling point -- a throwback to the old way of living.

All of the vendors are local residents, and their offerings change every week -- a surefire way to keep visitors interested and engaged.

Mr Jirasak added the prices of food and merchandise are low because most of the ingredients are locally sourced.

He also said that he noticed an upswing in the number of Chinese and Taiwanese visitors in recent months, which he hopes can cement the market's status as a tourist destination through online reviews and word-of-mouth.

"The locals also have that folk hospitality, which adds to the charm of the market," he said.

The vendors at the market agreed the market forges even closer ties between members of the communities, who said that it is "the goose that lays golden eggs for them".

Thongplew Janyam, who sells pork noodles, said she used to run a stall outside the temple that caters mostly to people in the neighbourhood. Since the market opened its doors, she has served customers from out of town and foreign tourists, who have helped push up her income.

The eco-friendly utensils, including the pinto and coconut shells which she serves her food in, add value to the experience for many customers, said Ms Thongplew.

The market has taught the communities a valuable, hands-on lesson about tourism, and the prosperity it has brought has improved the lives of many residents.

Aree Nilpinij, another vendor, said the market has given her the place and the opportunity to let visitors from other provinces to taste her yam hua plee (spicy banana blossom salad), yum mamuang (unripe mango salad) and sweets made from mapraw kathi (soft-fleshed ripe coconuts) -- the recipes for which were passed down by her grandmothers.

She said the market, which is the product of the boworn concept, has empowered the communities.