Vietnam's home-grown religion is a colourful celebration of multiple faiths

After centuries of wars -- as well as the recent terrorist attacks in New Zealand and Sri Lanka -- it's easy to despair about religion and the conflict it causes. What seems to spark the extremism is the insistence, by most faiths, that they offer the one and only path to salvation -- and the rest be damned.

So it's naturally refreshing to find a creed that seems to explicitly embrace the beliefs of multiple faiths.

The beliefs of Cao Dai explicitly intertwine the major teachings of the religions that it incorporates. Before the world began, the nameless, formless Tao existed. When the Big Bang occurred, God was created simultaneously, and went on to create the Goddess, known as both Holy Mother and Mother Buddha. The purpose of life is to become a Buddha and escape the cycle of death and rebirth. There are 72 planets with intelligent life, with No.1 closest to heaven and No.72 closest to hell; Earth slots in at No.68. 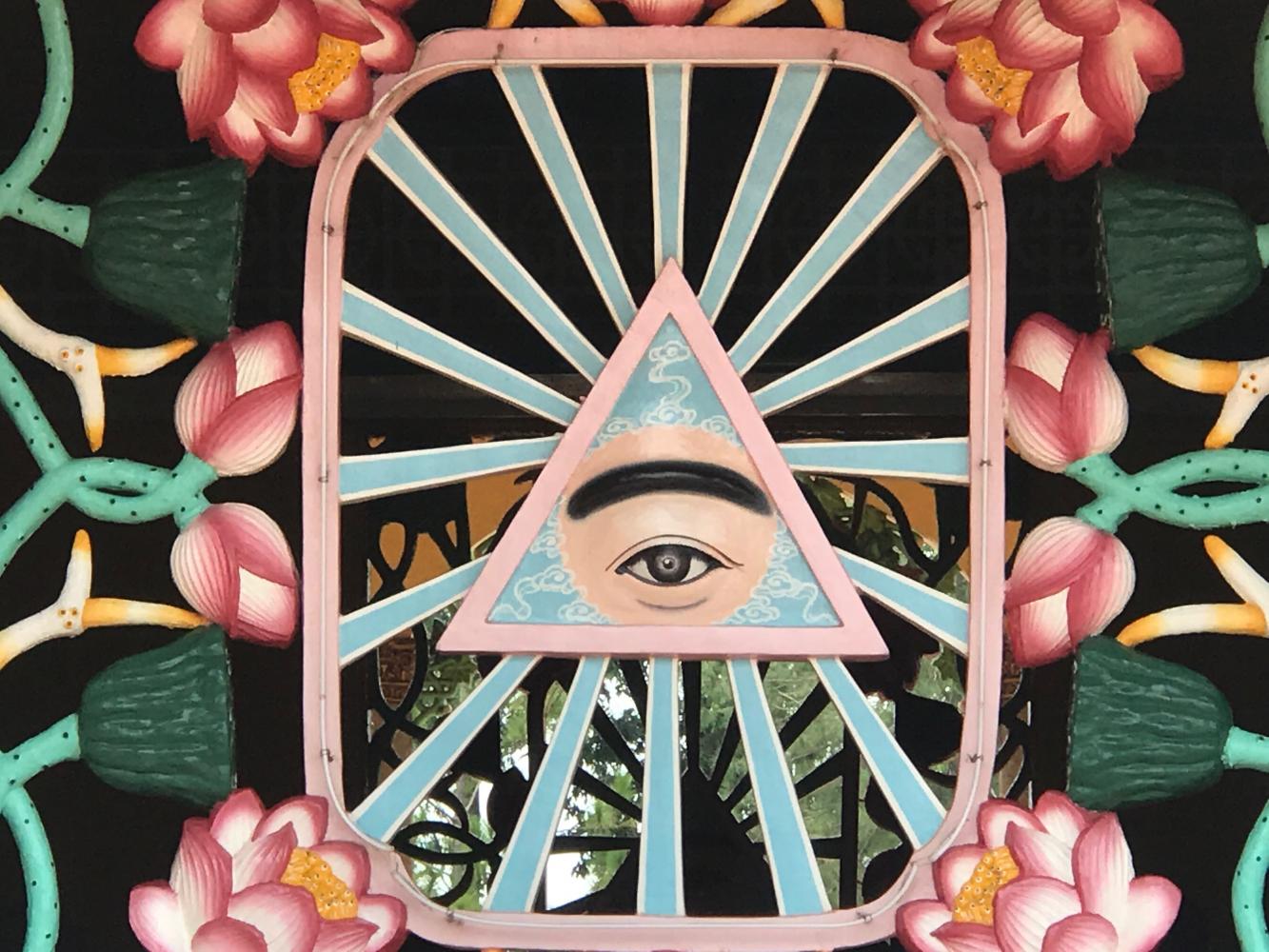 The organisational structure of the religion is similar to Catholicism, with a Pope, cardinals, bishops and priests. The estimates of its followers range from between 2-6 million, although the numbers are hard to verify in the officially atheistic communist country and appear to be somewhat exaggerated.

In any case, tourists flock to the Cao Dai temple in Tay Ninh, the city 90km northwest of Ho Chi Minh City and 40km from the Cambodian border where the religion was formed in 1926, not because of any great enthusiasm for theology but for chance to visit the magnificent structure and observe its elaborate rites, including a female choir accompanied by traditional instruments.

The temple itself is a huge rectangular building fronted by two square-shaped towers with multiple balconies that would not look out of place in a Christian church. Halfway down and at the back are another two pairs of towers, but these are circular and more reminiscent of a mosque, while along the sides are a set of overhanging eaves in the style of a Buddhist temple. 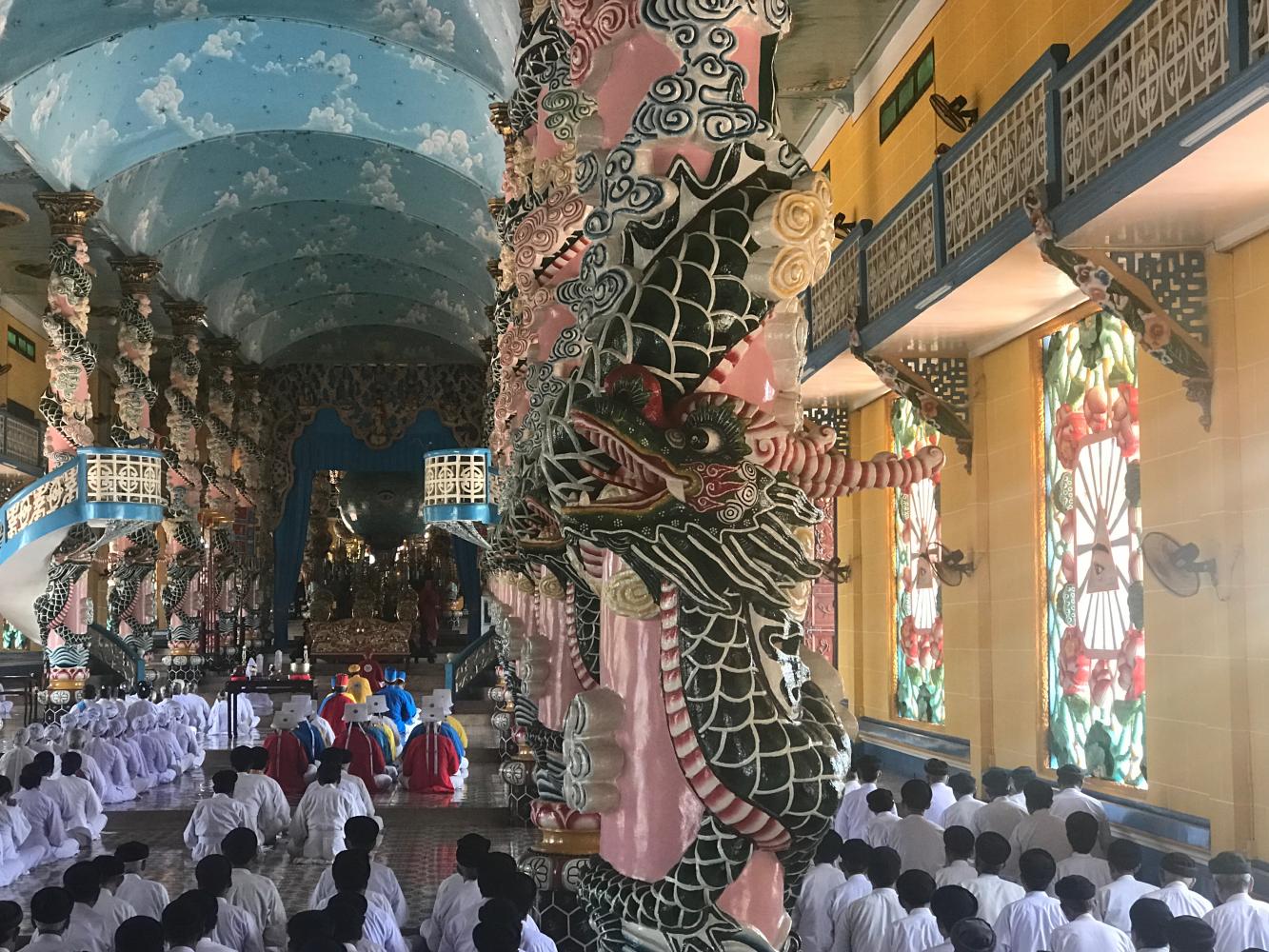 Left  The temple's main hall is a blaze of colour and symbolism. DAVE KENDALL

Inside and out, the temple is adorned with symbols of the various religions incorporated into Cao Dai: the Buddha, Confucius, Holy Mother, the Yin and Yang symbol. Colours are bright and dominated by pinks, blues and yellows. The single, vast chamber features an ornate tiled floor, yellow walls and pink columns coiled with green snakes and imagery of mystical creatures; the domed ceiling is painted with stars.

During religious services, including the noon mass most popular with tourists, the chamber fills with a procession of white-clad worshippers who sit in formation and assume the lotus position.

Perched on a balcony on one end of the temple, a white-clad female choir sings a haunting melody supported by a small orchestra using traditional instruments. Tourists, once they've removed their shoes and hats, are able to watch the musicians and the choir at close quarters from the other side of a rope, although entry to the hall floor is not permitted and the balconies running along it were closed off when I was there. 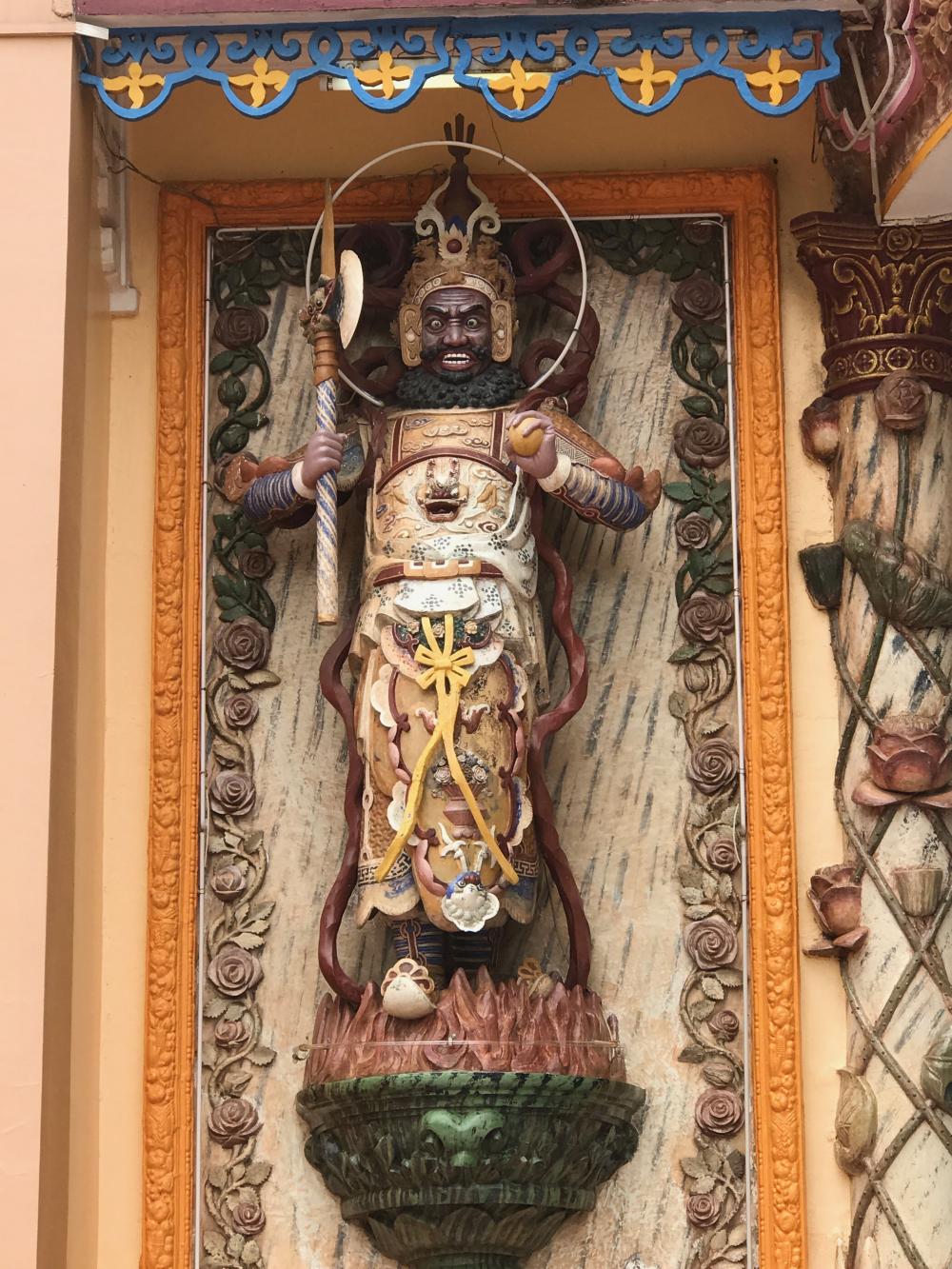 Like most tourist destinations in Vietnam, the Cao Dai temple in Tay Ninh is best visited on a guided tour. The tour is cheap -- a one-day trip from downtown Ho Chi Minh City that also includes a visit to the Ho Chi Minh tunnels at Cu Chi costs less than 1,000 baht -- and the guides are knowledgeable and speak good English. The vast majority of Vietnamese do not, and DIY tourism is a challenge if you don't speak the local language.

This became apparent when I took a motorcycle taxi from the temple to my hotel. The driver nodded enthusiastically when told the name of the hotel, but it soon became apparent he had actually never heard of it, and at several points during the next hour tried to force me off the bike in the middle of nowhere with no hotel in sight. I eventually found it -- about a 10-minute walk from the temple itself (Google Maps, as is often the case, placed the hotel in a different postcode).

The following day I rented a motorcycle -- a somewhat hazardous enterprise, since a bribe is necessary if pulled over by the police, given that an international licence, let alone a Thai one, is not legal in Vietnam -- and rode out to the Black Virgin mountain. I then navigated a series of closed entrances and ticket offices, Vietnamese-only signs and an hour-long walk across tarmac in baking sunshine before I even found the start of the trail. Tourist facilities, one can say, are rather less developed than Thailand. But unique, spirit-boggling sights like the Cao Dai temple are well worth the effort.

There are more than a dozen flights per day from Bangkok to Ho Chi Minh City. Cao Dai temple is in Tay Ninh, a city 90km to the northwest and 40km from the Cambodian border. The journey takes about two hours from Ho Chi Minh by road in a taxi, and a little longer by bus or minibus from An Suong station — some distance from the tourist area — to Tay Ninh bus station, from where another taxi ride is necessary. The temple is best reached as part of a one-day guided tour with hotel pickup, which usually includes a visit to the Cu Chi tunnels and costs less than 1,000 baht per head when booked at one of many travel agencies in Ho Chi Minh City, or a little more when booked online.