Out of comfort zone

Every Bangkokian knows that the MRT has launched a trial run for its five new stations. This is perhaps, one of the most gleeful news we have received this year (we haven't had much of that lately) as it allows you and me an easier way to explore beyond the three S's of Bangkok: Siam, Silom and Sukhumvit. Not that these three areas are guilty of anything but there's so much more to Bangkok that awaits your discovery.

Equipped with Google Maps and comfy shoes, I did the legwork (and clocked my pedometer) to check out these new stations and give you a preliminary research on points of interest each station has to offer.

Things to Know Before Boarding

Tha Phra is the only station that isn't underground. Located above Tha Phra intersection, the station is impressively huge and is a worthy object for architectural photography. It's quite a maze to navigate but it's worth a visit if you want to explore Talat Phlu market, a famed food mecca of Thon Buri.

You can walk to the market in under 15 minutes from the station's Exit 1. That should work up an appetite before you binge on all the food at the market. The area gives you a slower pace of life with many delicacies to enjoy. Enjoy a bowl of yen ta fo and deep-fried bananas near Talat Phlu train station and snap IG moments before you walk for a few minutes to Wat Rajkrueh to feed the fish in Khlong Bangkok Yai. 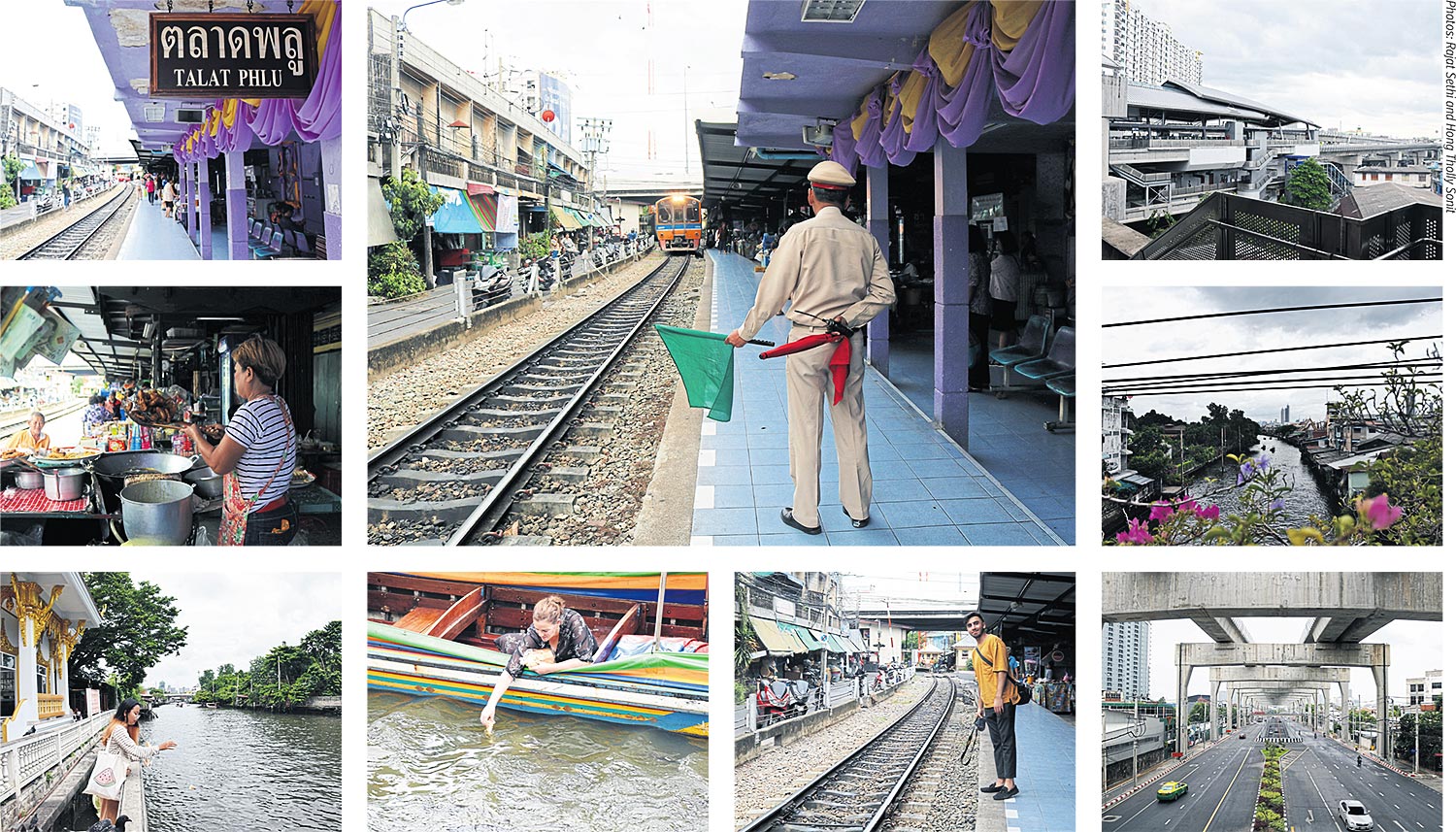 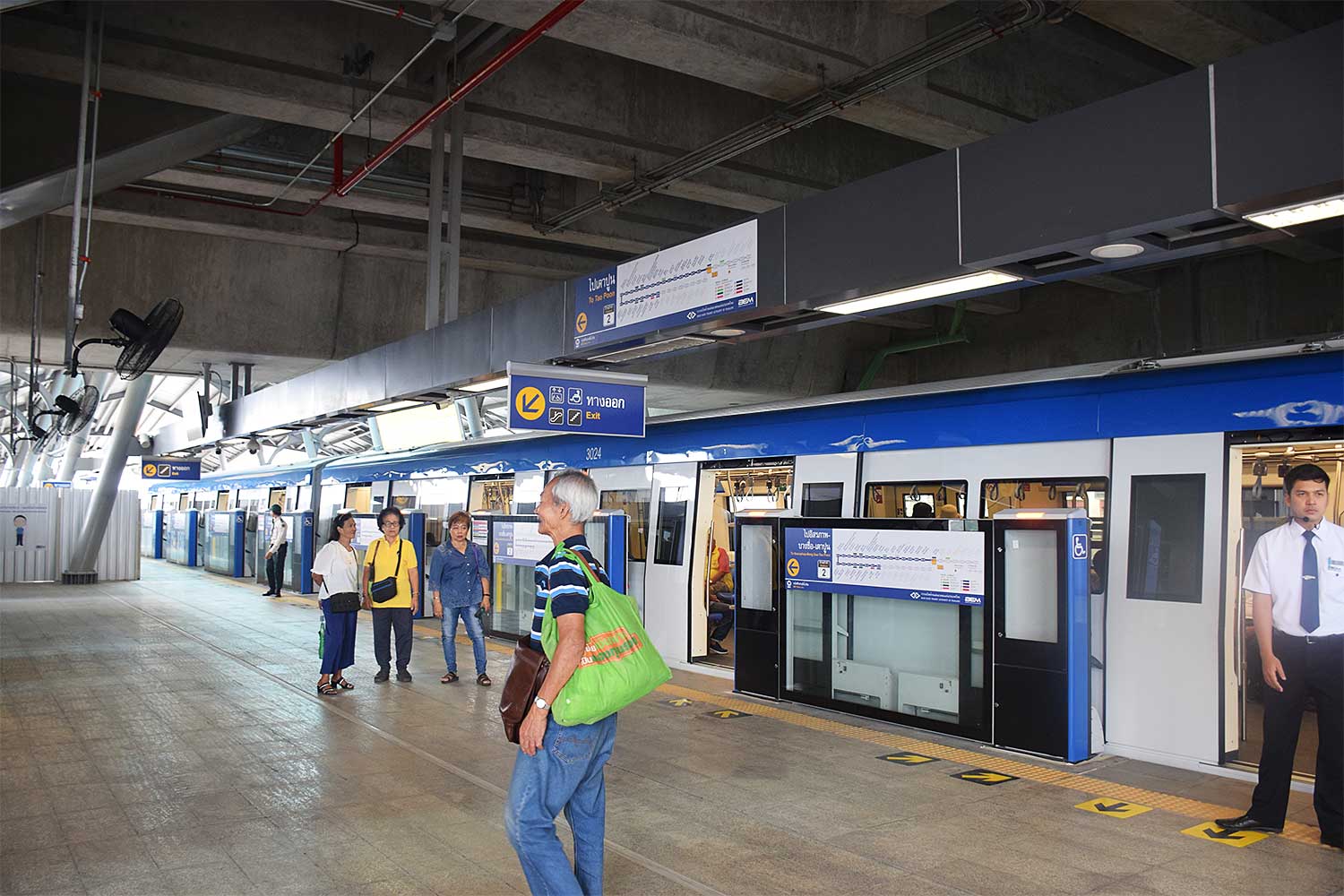 Besides snapping pictures with golden Thai-style swans inside MRT Itsaraphap, you can do a mini merit-making tour at nearby temples. Named in honour of Taksin the Great, who liberated Siam from Burmese occupation after the Second Fall of Ayutthaya, Itsaraphap Road (freedom) is home to several masjids and royal Buddhist temples.

Wat Ratchasittharam Ratchaworawihan or Wat Plub for short, is a short walk from Exit 2. King Rama III stayed here while he was ordained as a monk and you can find a big replica of Buddha's feet in its convocation hall. From Exit 1, you can easily walk to Wat Hong Rattanaram Ratchaworawihan or Wat Hong for short, and be wowed by its majestic and very colourful convocation hall, which is surrounded by fake grass and merit-making activities. If you need some auspiciousness to lift you up, stop by its holy water pond. The legend goes that Taksin the Great bathed in this pond in preparation for every royal ceremony. Also from Exit 1, walk 12 minutes to reach the famous Wat Arun Ratchawararam Ratchawaramahawihan. Don't worry, there are several cafes along the way for pitstops. 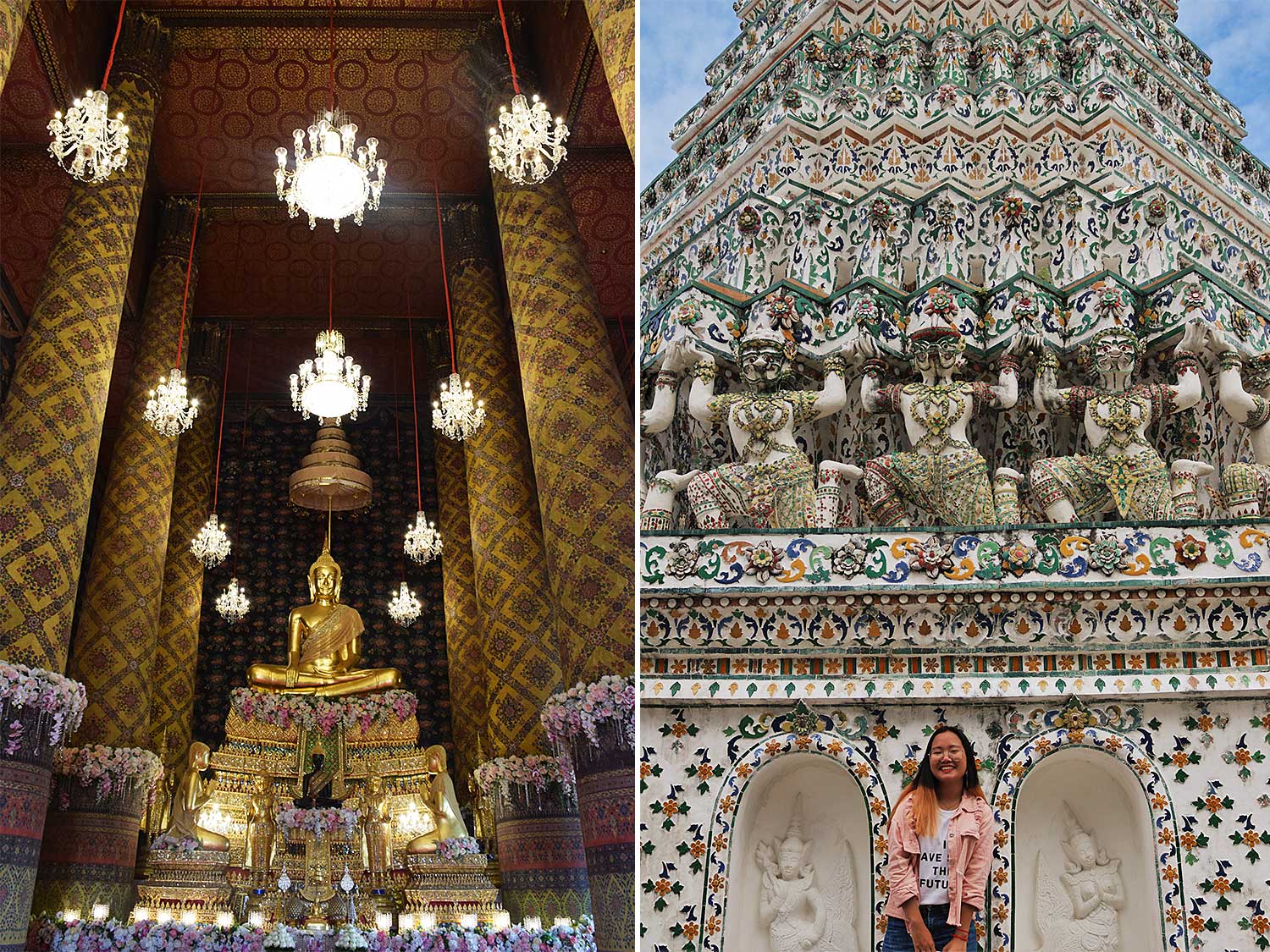 It's often dubbed the most beautiful MRT station and I can see why. It's one of only two stations located inside Rattanakosin Island, a term for an area of historic importance in Bangkok. Decked out from floor to ceiling, the grand interior is inspired by a palace hall and definitely worth snapping away. There are five exits, which mean you have plenty to explore.

Exit 1 comes out to the front of Museum Siam in case you want some edutainment. Walk further along Sanam Chai Road to visit Wat Pho, the Grand Palace, Wat Phra Kaew and Sanam Luang. There are many choices for a layman's interest, as well from retail therapy at Yodpiman Riverwalk, many riverside restaurants to Pak Klong Talat. If you don't mind walking a little more than 20 minutes, Saphan Phut Night Market awaits across the Chao Phraya river via Saphan Phut. 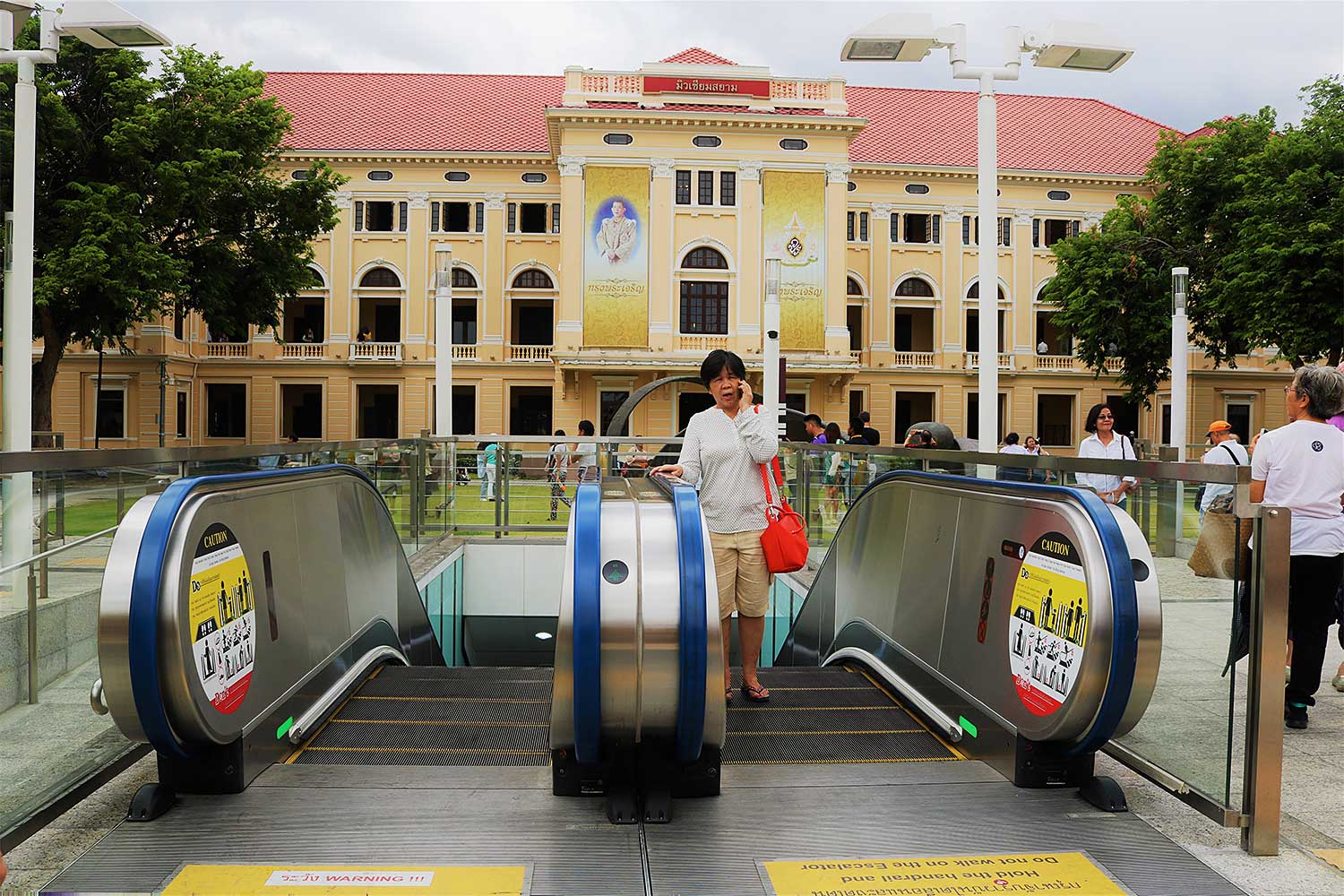 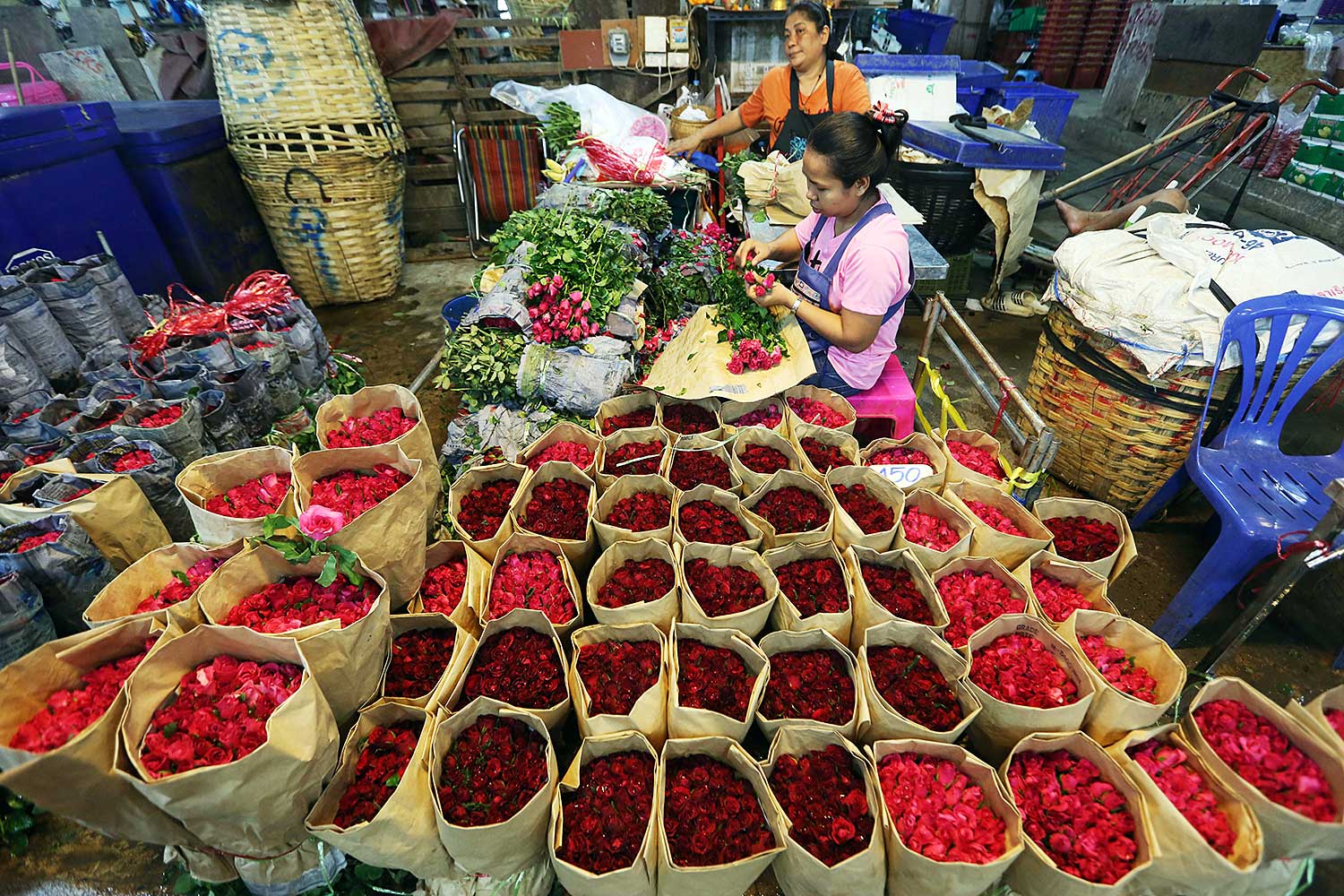 Instead of building an obvious entrance into the station, Sam Yot station is cleverly hidden inside a colonial-style building in keeping with the overall aesthetic of the neighbourhood. Located within the Rattanakosin Island, this station has an eclectic mix of offerings from countless gun shops to toys. Stop by eight-decade-old On Lok Yun cafe (every day from 5.30am-4pm) on Charoen Krung for cheap coffee and breakfast. They keep everything as it first was in terms of decor, including the faded Milo containers in the overhead cabinets. Or hit The Old Siam Plaza to browse through guns, silks, jewellery and food galore.

From there, cross the street to Nightingale–Olympic, possibly Bangkok's oldest malls, which started in 1930. It seems to have been recently repainted on the outside. Millennials should visit here and be puzzled by old-timey items on the shelves and wonder what they are for. Vintage lovers should check it out, too as they may spot jewellery from several decades ago. Two aunties, who minded the shop during our visit, were kind and welcoming but they asked us not to take any photos inside (there are signs, too). Although the building stands seven floors tall, only two floors were open at the time of our visit. It's worth visiting anyway and it feels like a living museum of sorts. 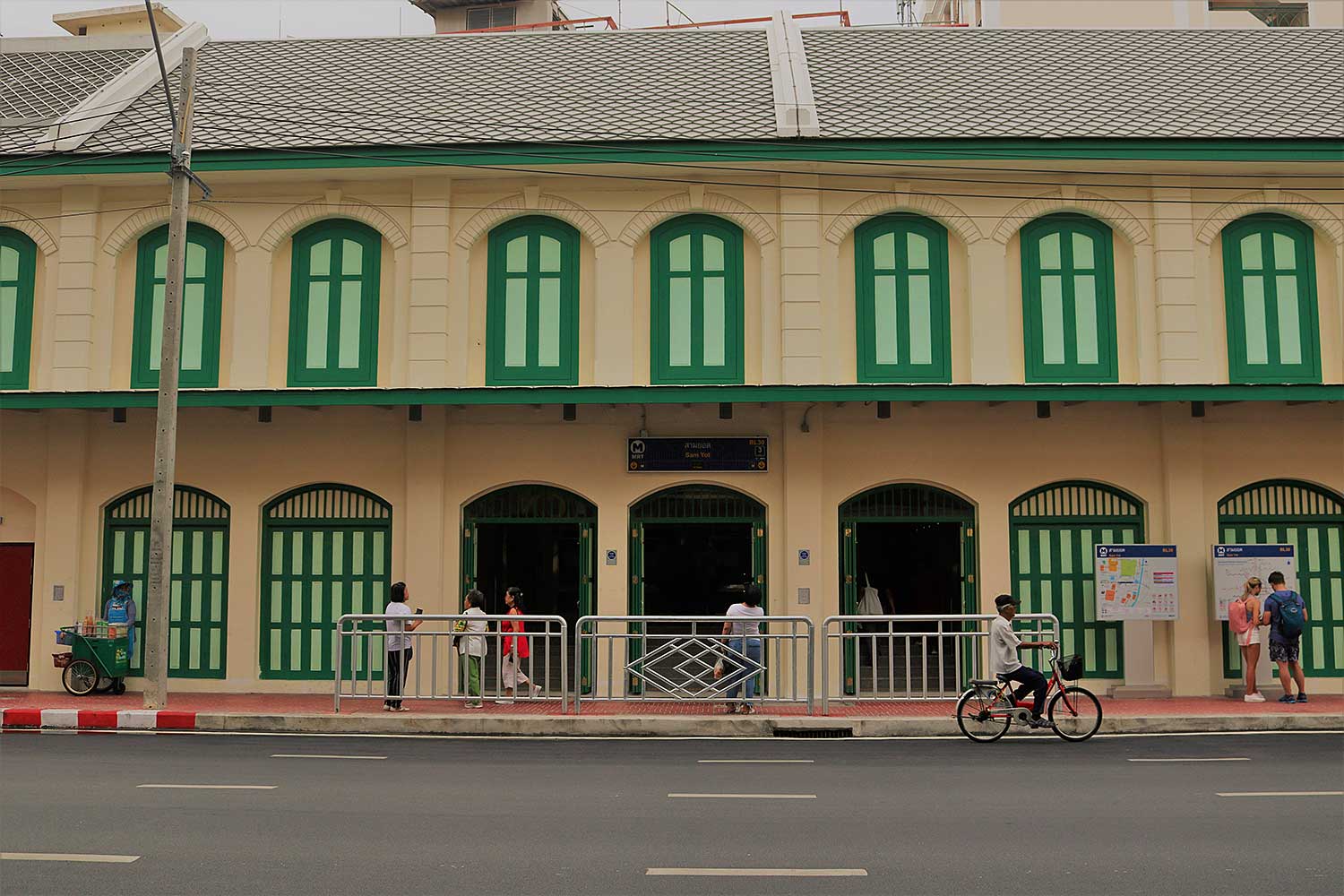 You have to backtrack a little to visit Rommani Nart Park. Sure you won't make an effort to come all the way here for a jog but do visit the park as it stands where a prison used to be. Formerly the site of Bangkok Remand Prison, the park still has remnants of its prison past from watchtowers to a building with actual cells. The Correction Museum is adjacent to the park but I'm told it's under renovation.

There is also something for hobby enthusiasts and toy collectors (see what I meant by eclectic). Mega Mall Saphan Lek is basically six floors of toys sellers (with a few camera shops). You can probably find an Ironman for every alternative reality in the Marvel multiverse here. If you're a fan of trading card games, check out Always One building across the street. As you know, Saphan Lek market was dismantled and it now looks quite pleasant as a lovely and long walkway along Khlong Ong Ang has taken its place. It was rather pleasant to enjoy a stroll but beware of occasional smells from the canal.

You should save this station for last especially if you intend to enjoy street food on Yaowarat. Named after the Thai name of Wat Leng Noei Yi, Wat Mangkon station should just be called Nescafe station, thanks to its wall being plastered in Chinese imageries that also serve as subtle ads for the coffee brand. That doesn't stop people (or me) from taking photos of them though.

Check out Wat Leng Noei Yi for a Siam si prediction or increase your fortune if your Chinese zodiac happens to be considered unlucky this year. Get out through its side gate and you'll see famous Jek Pui Curry cart but you'll need to balance the plates of khao gaeng on your hand as you eat because there's no table. Stop by Bamee Jubkang if you want a big bang for your baht from its famously huge portion of noodle with pork (B40-50).

As the sun sets, of course, check out food galore on Yaowarat Road. Do a multi-course meal by hopping from one shop to another. Quench your thirst with freshly squeezed pomegranate or som cheng before heading to Soi Nana for bar-hopping if the night is still young, for you. 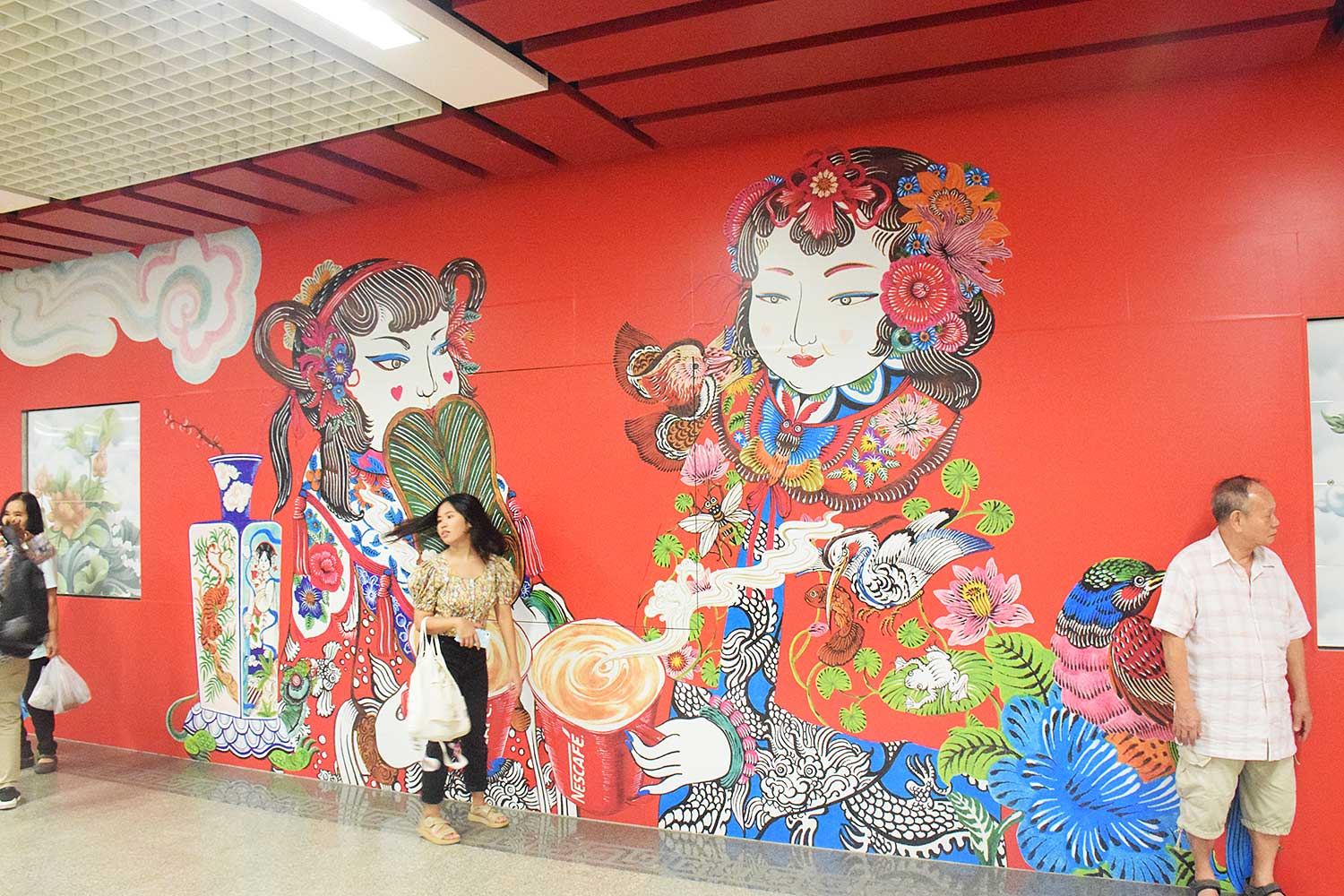 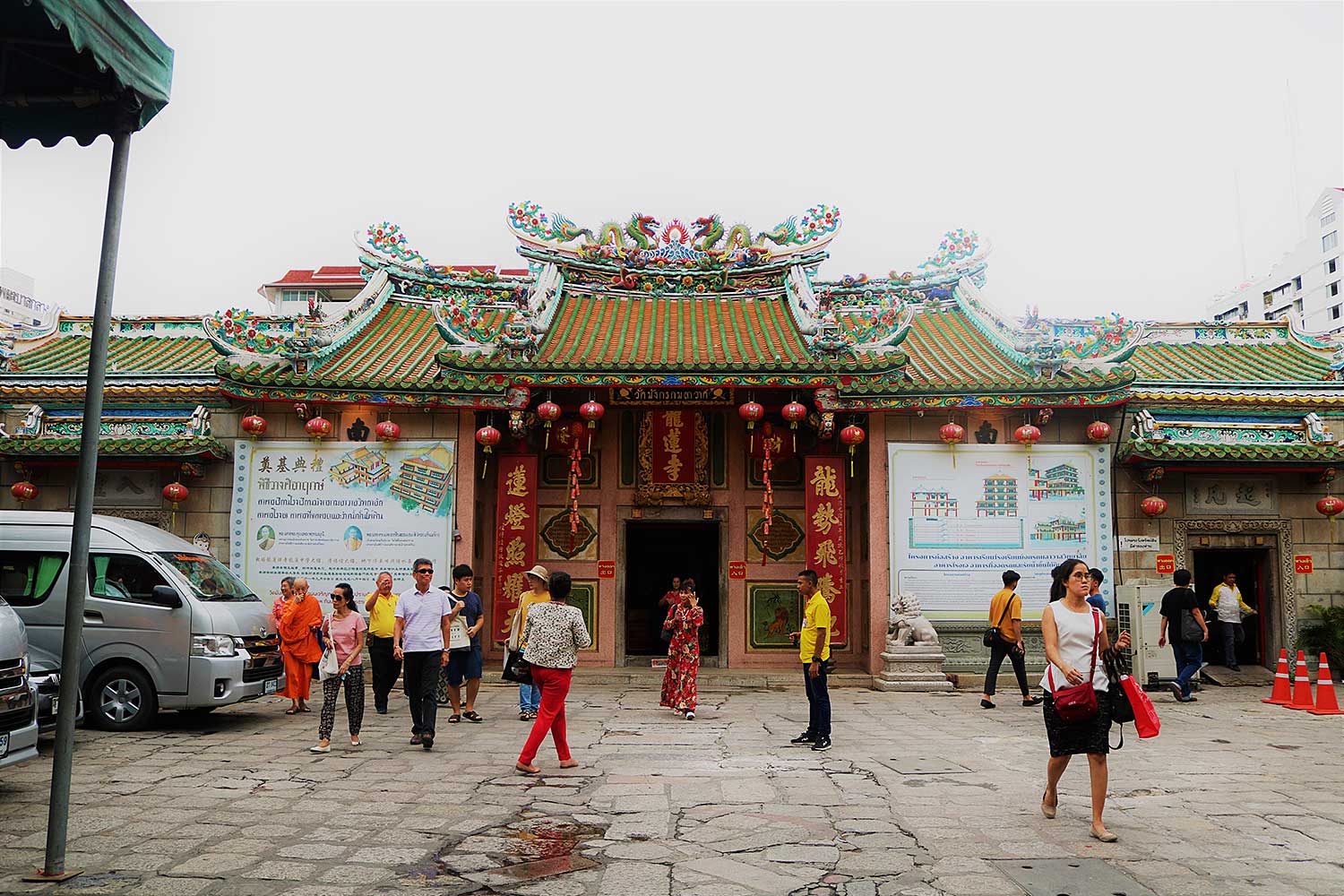