Banthat Thong Road has transformed itself into a restaurant row, with one sensational eatery after another

Up until a few years ago, Banthat Thong Road served almost no purpose for gourmands in search of culinary plenitude. 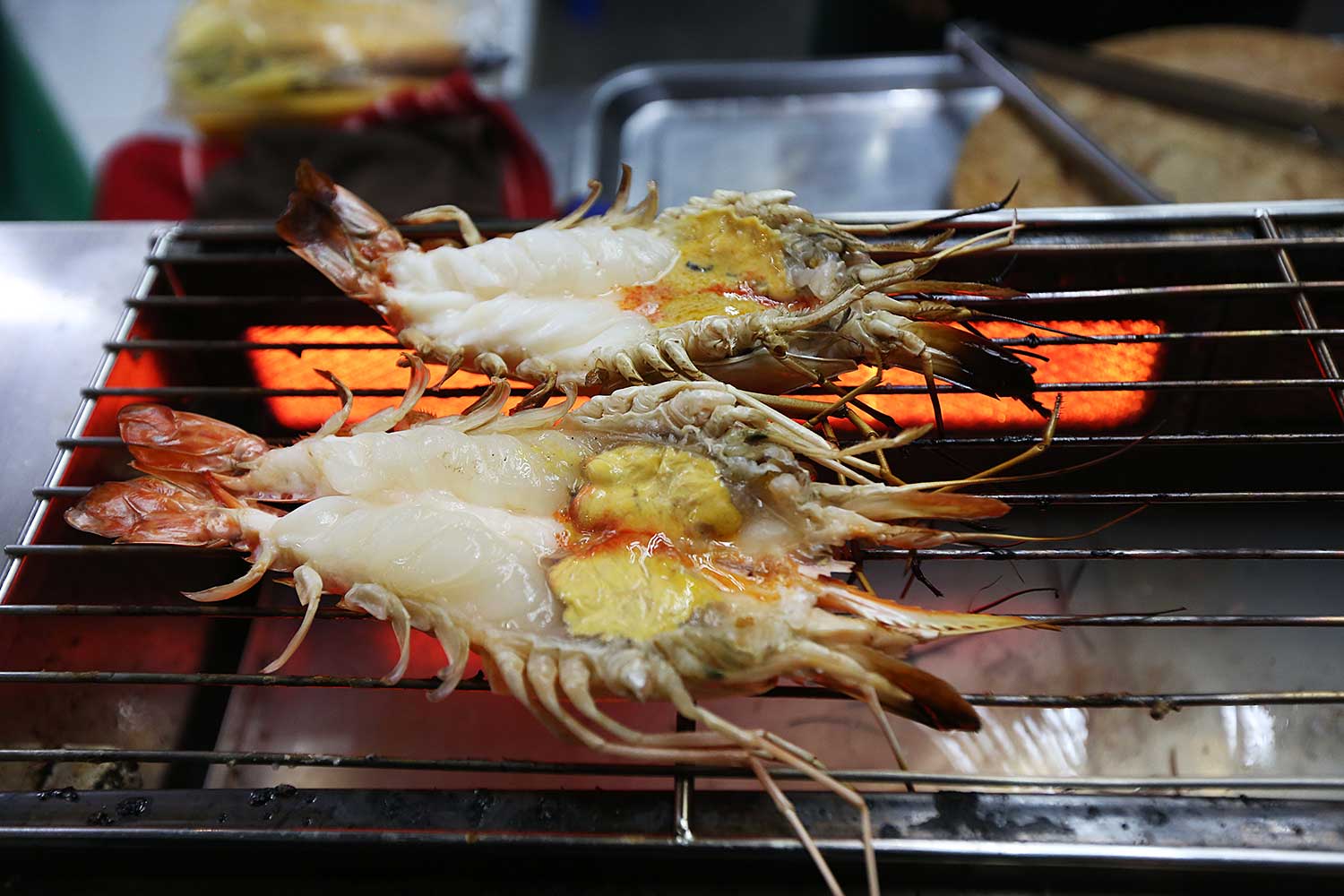 Because the lower side of the 2.5km-long Banthat Thong, which officially stretches from Phet Phra Ram intersection in Ratchathewi district to Saphan Lueng intersection in Pathumwan district, runs behind Chulalongkorn University and the National Stadium, the road had long been known as a hub of sporting goods.

Today, however, driving by Banthat Thong promises to easily evoke ones' gastronomic sensations.

With areas surrounding the four-lane thoroughfare being lately modernised and developed by Chulalongkorn, Banthat Thong now enjoys its new image as a rustic backdrop of the brilliantly-landscaped university campus.

For some reason, that has also drawn almost a hundred food vendors into the once uninspiring strip.

From left: Itti is where visitors can find over 20 flavours of house-concocted ice cream; Nothing more than bubbling hot, thick congee is offered at Joke Samyan. 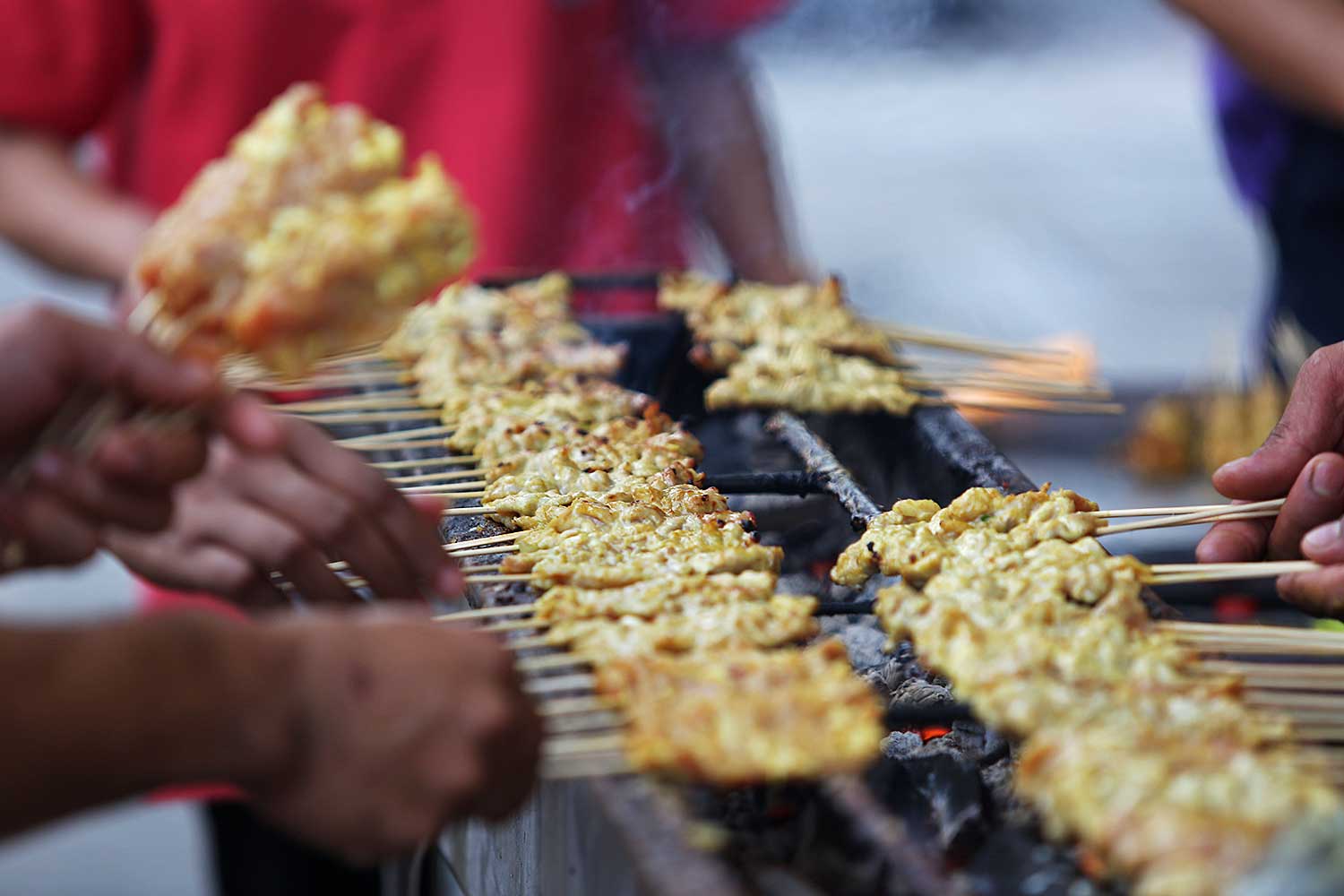 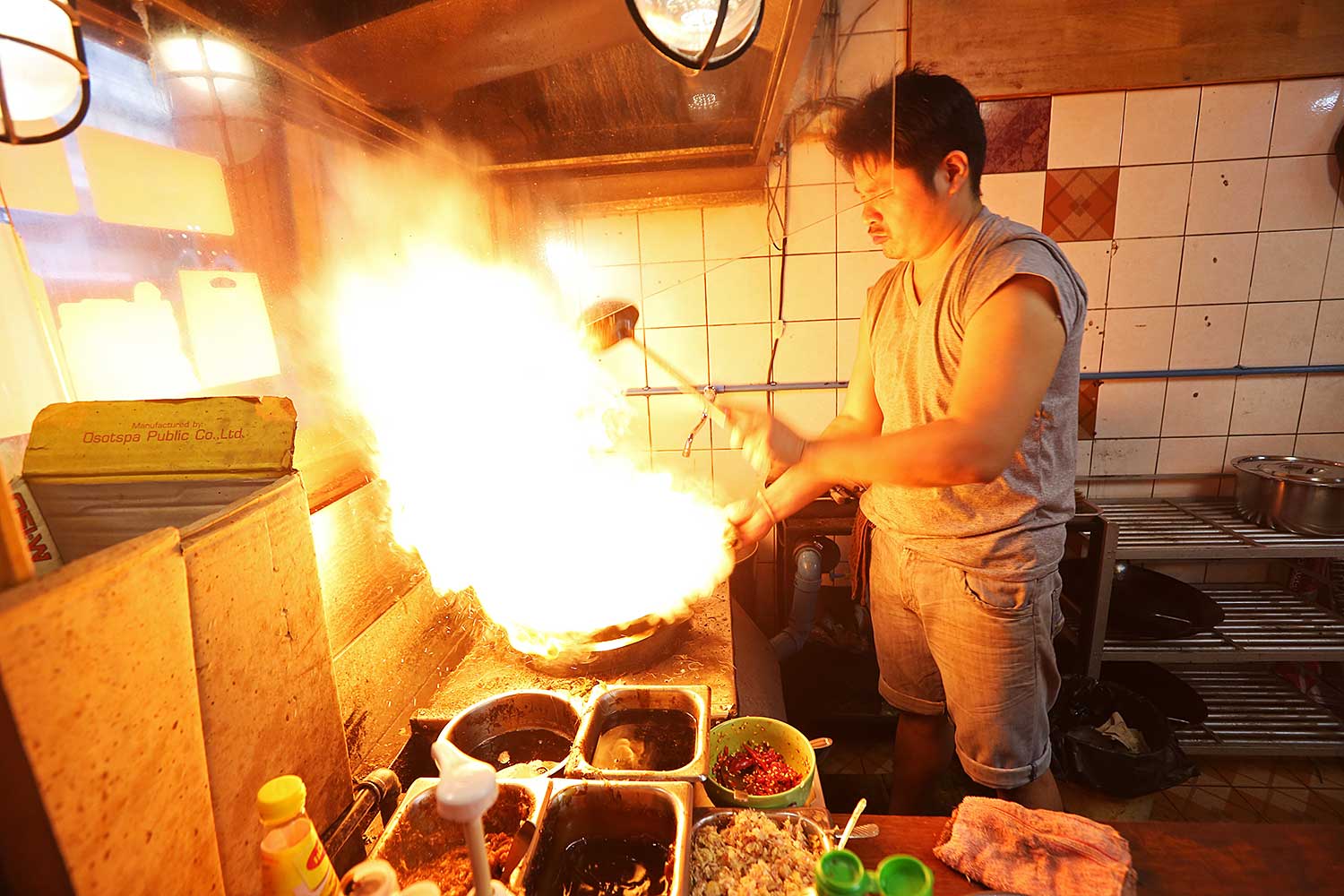 Although the majority of these food shops have taken over age-old shophouses along the street, many others can be found tuck inside newly built commercial arcades both on and off the main road.

Keen foodies can tell by the eateries' names and their culinary offerings that several of them are prominent cooking masters relocated from the bygone Suan Luang and Sam Yan. Both vicinities, now part of the extensive Chulalongkorn University Centenary Park, were home to hundreds of Thai-Chinese families and regarded in the 90s and 2000s as a miniature Yaowarat.

Thus you can find here an impressive variety of Chinatown-styled street food classics as well as home-cooked creations prepared to family recipes being offered alongside international cuisine and up-to-the-minute delicacies.

Recently, Life went on a gastronomic 800m walking expedition along the lower side of Banthat Thong Road on a Monday evening that started where it meets Rama I to Chula 26.

We could have covered a farther distance if we had bigger stomachs -- the walking wasn't the challenge, the eating was. Little had we expected to be bombarded by such a tempting plethora of food. 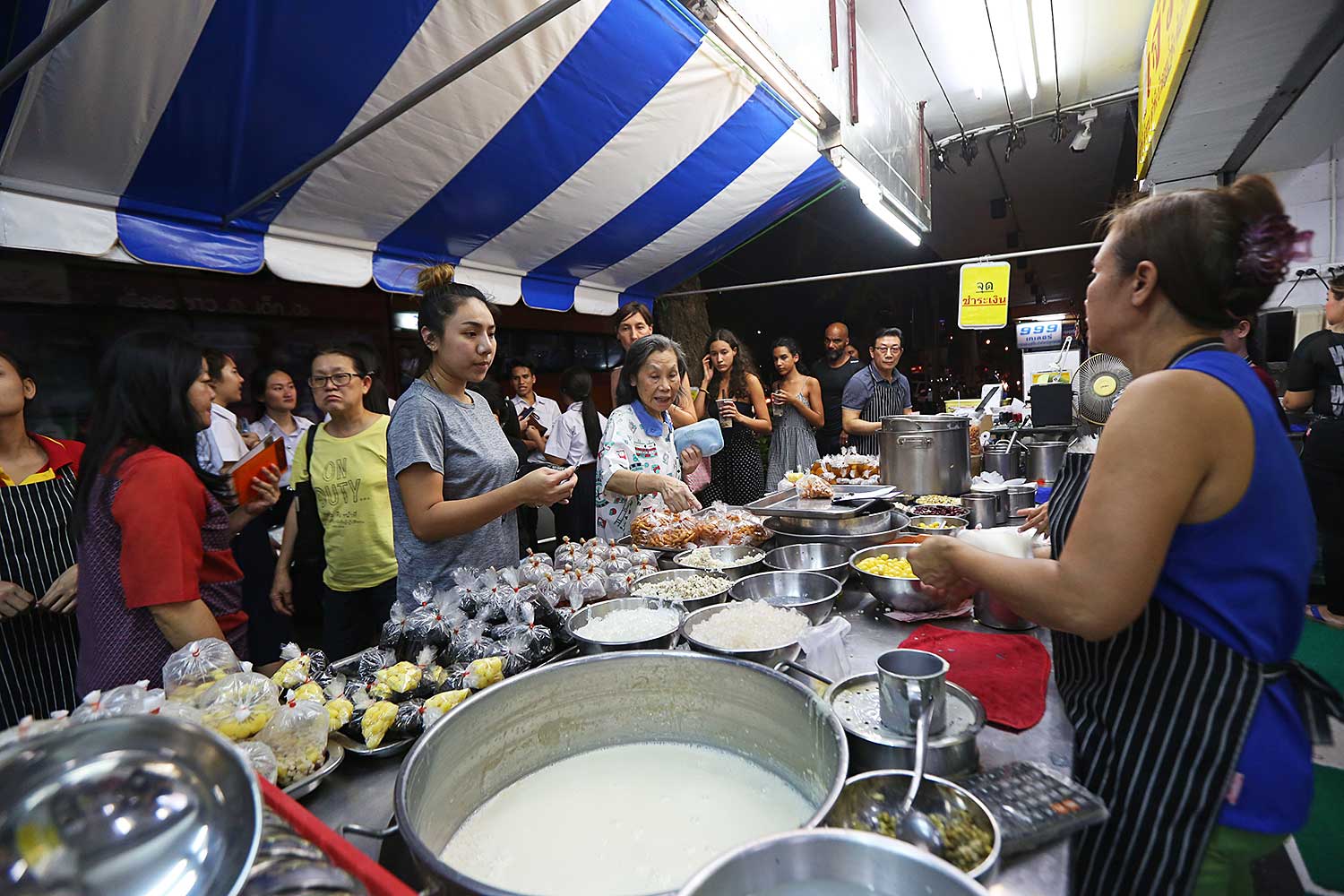 Once operated from a humble food cart, this family-run soybean milk joint now occupies a shophouse and enjoys long queues of customers.

From this unprepared visit of ours, we found on the street alone 43 substantial eateries (not including hawkers nor sub-soi food joints) actively operating. It's a thriving community of long-established veterans and crafty aspirants.

Most of the shops open all day while the rest operate only in the evening and close at midnight.

Dinner folks are recommended to be there as early as 5.30pm to avoid the crowd. Otherwise, 8pm is the best time should you wish to experience Banthat Thong's full dynamic vibe.

The following is a report on some of the establishments we checked out during our three-hour gobbling spree.

Starting from the Charoen Phon intersection, Tao Huay Je Noi (085-088-3430) specialises in soft bean curd in piping hot ginger soup. The shop's black sesame dumplings in ginger syrup (40 baht) were some of the best in town thanks to the dumpling's fine and soft yet glutinous skin that hid inside a tasty rich black sesame filling.

Tang Sui Heng is a sizeable open-air restaurant selling Chinese-style braised duck and goose, duck noodles and baked duck in clay pot, whereas the small-spaced Je Sri nearby is a master of wok-fried noodles with mimosa and other wok-fried dishes.

As its name suggests, the 60-year-old eatery serves up nothing more than the bubbling hot congee (or rice porridge) with a variety of additional protein such as ground pork, pork liver and eggs garnished with grated ginger and spring onions. Price is 40 baht for an order of congee with ground pork.

At the corner of Chula 6 is Moo Satay Nai Song (081-432-5411). Boasting flame-grilled fumes and queuing customers, the shop offers the charbroiled yellow-hued marinated pork accompanied by sweet and grainy peanut curry sauce and cucumber relish. Unlike the lean and dry version, the pork here (8 baht per skewer) is chubby, tender and juicy, and basically available for takeaway.

The street for the next 100m is gastronomically empty until you reach Chula 12.

At the opposite side of the road stands Santiphap (083-704-1613), a locally cherished eating joint specialising in boiled-rice soup (khao tom) with a variety of side entrées cooked freshly upon order. The eatery opens until 3am so it is better to arrive late to avoid a long wait for a table.

Between Chula 16 and 18, there's Toong Chae Tao Than (085-341-5294). Though the restaurant, of which the name indicates its wood-fired specialities, was first established eight years ago as a master of guaytiew phad si-ew (wok-fried noodles with dark soy sauce) and guaytiew rad na (fried noodles with brown gravy), it is now cherished equally, if not more, for the new creation of lawh nee moo, or fried noodles with pork and milk gravy (60 baht) and the more common khao na moo krathiem, or rice topped with fried garlic pork (50 baht).

Further down the same side of the road, there's another packed eatery, Khao Tom Haeng Rim Nuun (096-680-8882). It serves up a dried rendition of boiled-rice soup with various toppings and soup options that cater to different tastes and budgets. We tried the tom yum seafood (110 baht), the sea bass (70 baht) and the pork ribs (55 baht) options and weren't much impressed.

Should grilled seafood be your craving, you might want to check out Aey Seafood (081-619-1924). Of its extensive menu, worth-having dishes include grilled river prawn, crab and glass noodle hotpot, squid with spicy lime dressing and deep-fried sea bass.

Not far from the ever-crammed seafood joint is a fish ball noodle shop (02-215-1905). It is one of the bygone Suan Luang's best-known fixtures that has been treasured for the chewy and bouncy texture of its fish balls and tasty clear soup.

Our gastronomic mission along Banthat Thong Road wouldn't be complete without stopping by the legendary Nam Tao Hu Je Wan (081-421-3761).

Once operated from a humble food cart, this family-run soybean milk joint now occupies a spacious and brightly-lit shophouse space with dozens of tables and chairs set inside the shop and on the street.

Graced with piping fumes and the comforting scent of soybean milk, the shop basically serves up the house-made drink with choices of edible additives such as sago, barley, sliced candied gourd, seeds of hairy basil and tofu skin. Plain soybean milk is priced at 12 baht per order.

It is quite easy to find a parking space here should you arrive by car. Among the places that offer them are Stadium One arcade (Chula 6), I'm Park (Chula 7) and Chulalongkorn University Centenary Park (Chula 26). Service hours vary and fees may be applied.