A Tale of Two Chinese Cities

It was a gloomy morning when we arrived in Hangzhou, China. The overcast sky turned the entire city to quiet, grey grandeur under light drizzle as our bus pulled away from the airport to the city.

There were a lot of construction along the way. Fast-growing cities in China are always building something -- always transforming themselves -- that people who visit them once every few months would already notice the difference. For someone going there the first time, it's practically another world, but also one with balanced mixture -- like yin and yang -- where hi-tech innovation meets history and rich culture. 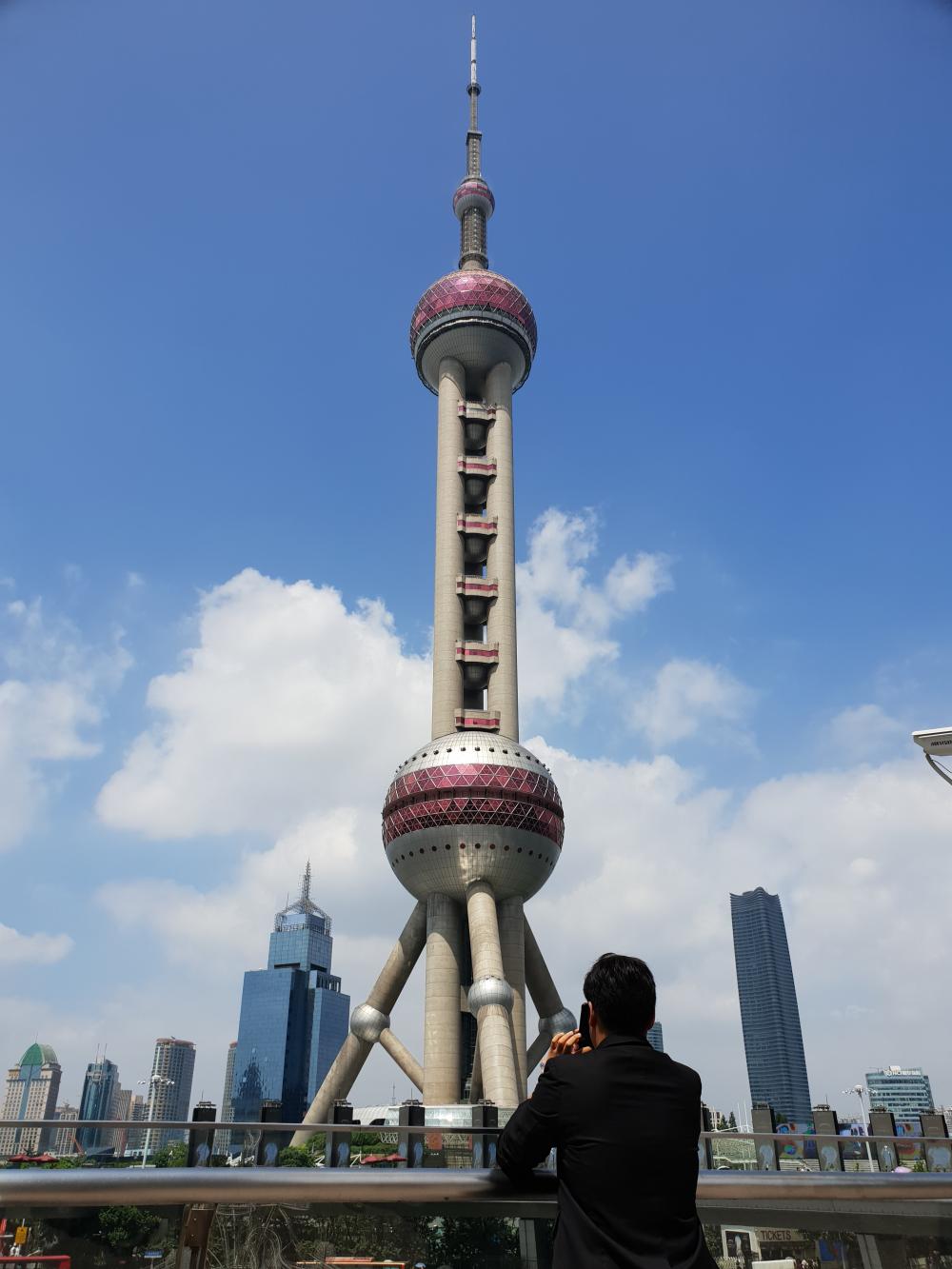 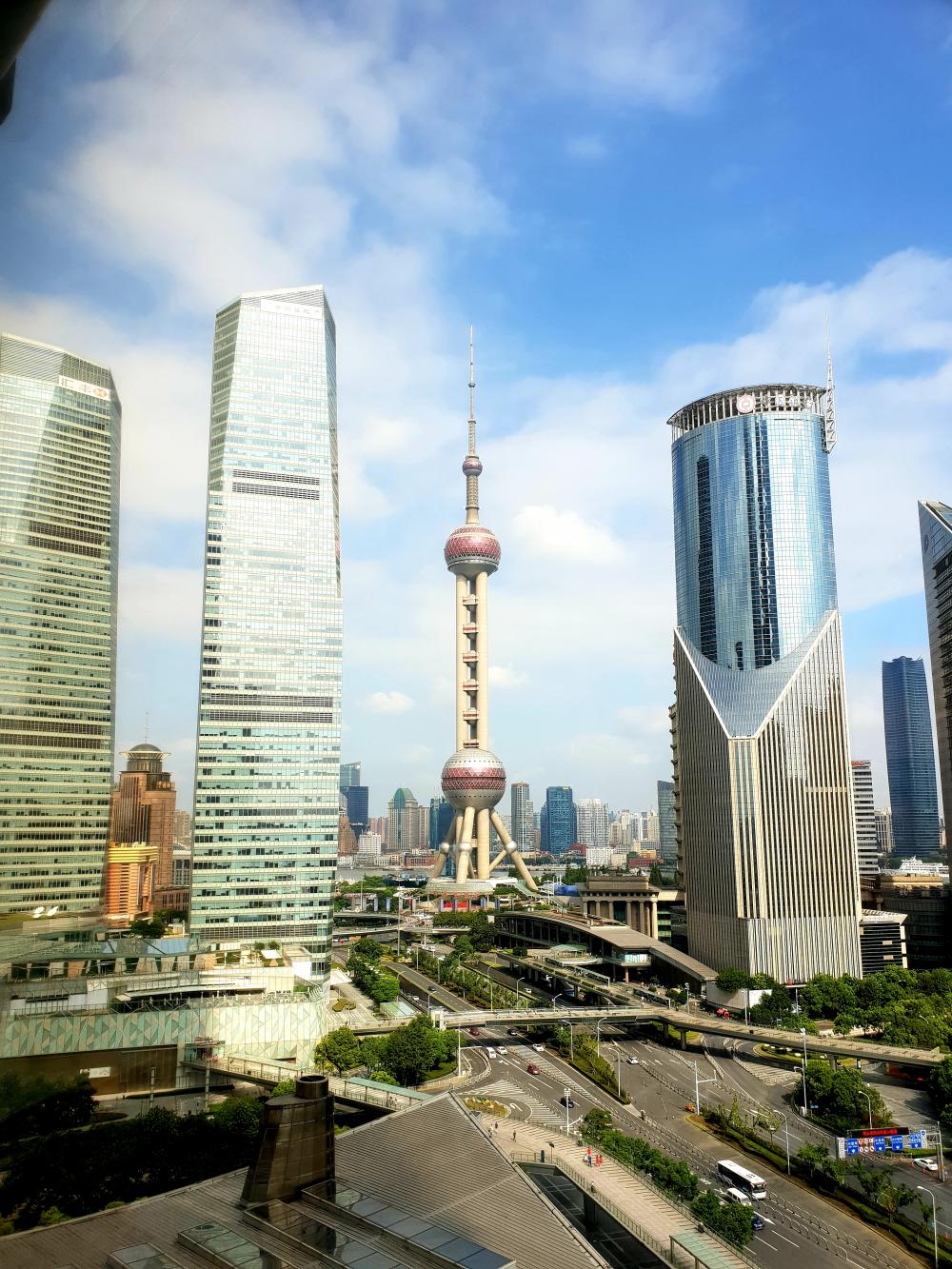 Hangzhou was clean. City streets were lined with trees and shared bicycles. People zoomed around quietly on their bikes. We explored the streets with a pocket full of cash, which we realised a little too late was almost useless in this cashless city. A bubble-tea shop we stopped at didn't have change for our banknotes. A lot of transactions conducted at these shops are now done through mobile and online payment platforms like Alipay, to the point they often have no cash on hand. 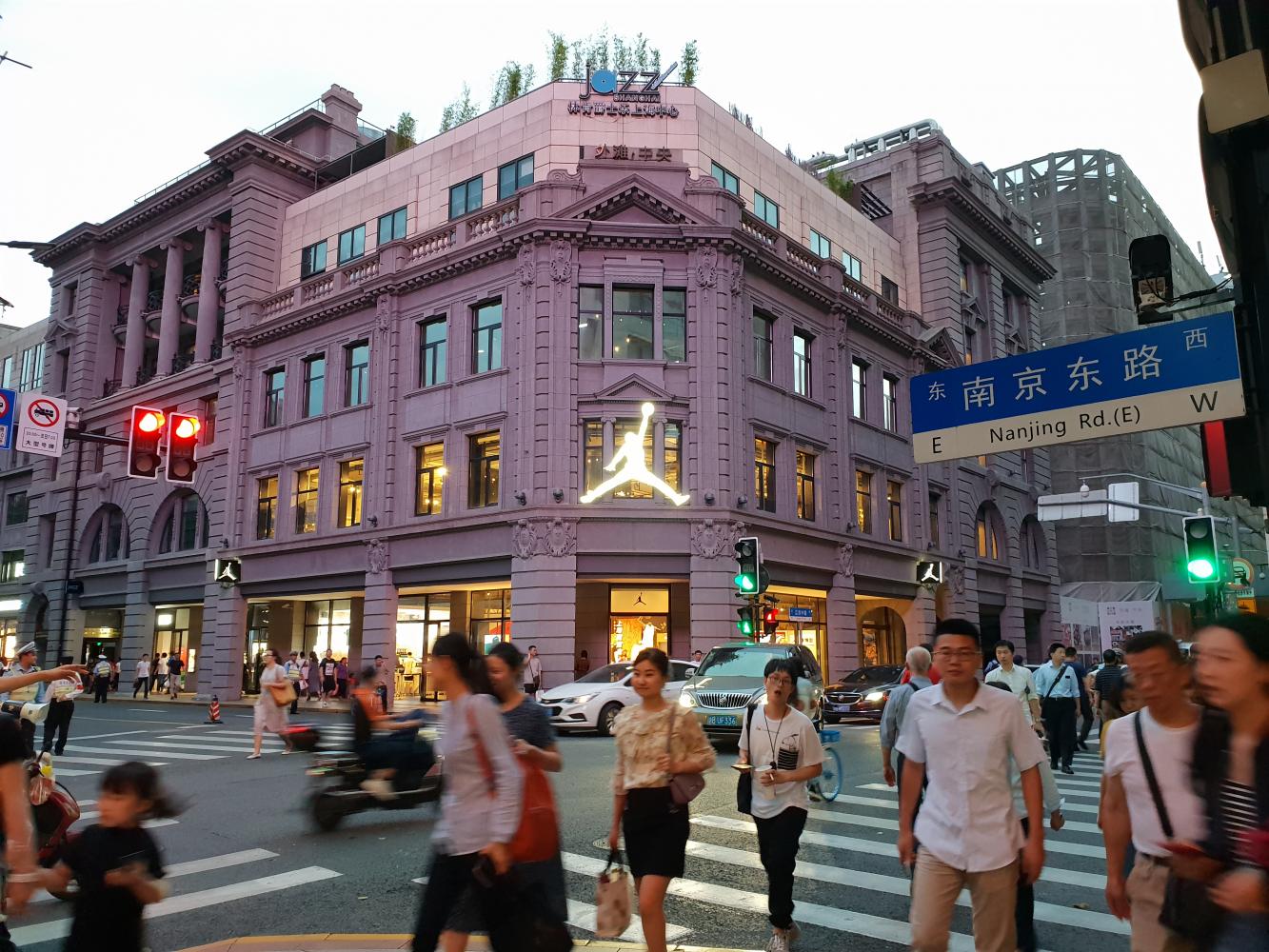 So, no bubble tea for us that morning. Elsewhere, there was a beggar on the street wearing a QR code badge around his neck for money transfer. In some places, it doesn't even take a mobile phone, but rather a person's face to pay through facial recognition payment technology. A cashless society is clearly inclusive and advanced, but not so accessible to international visitors. 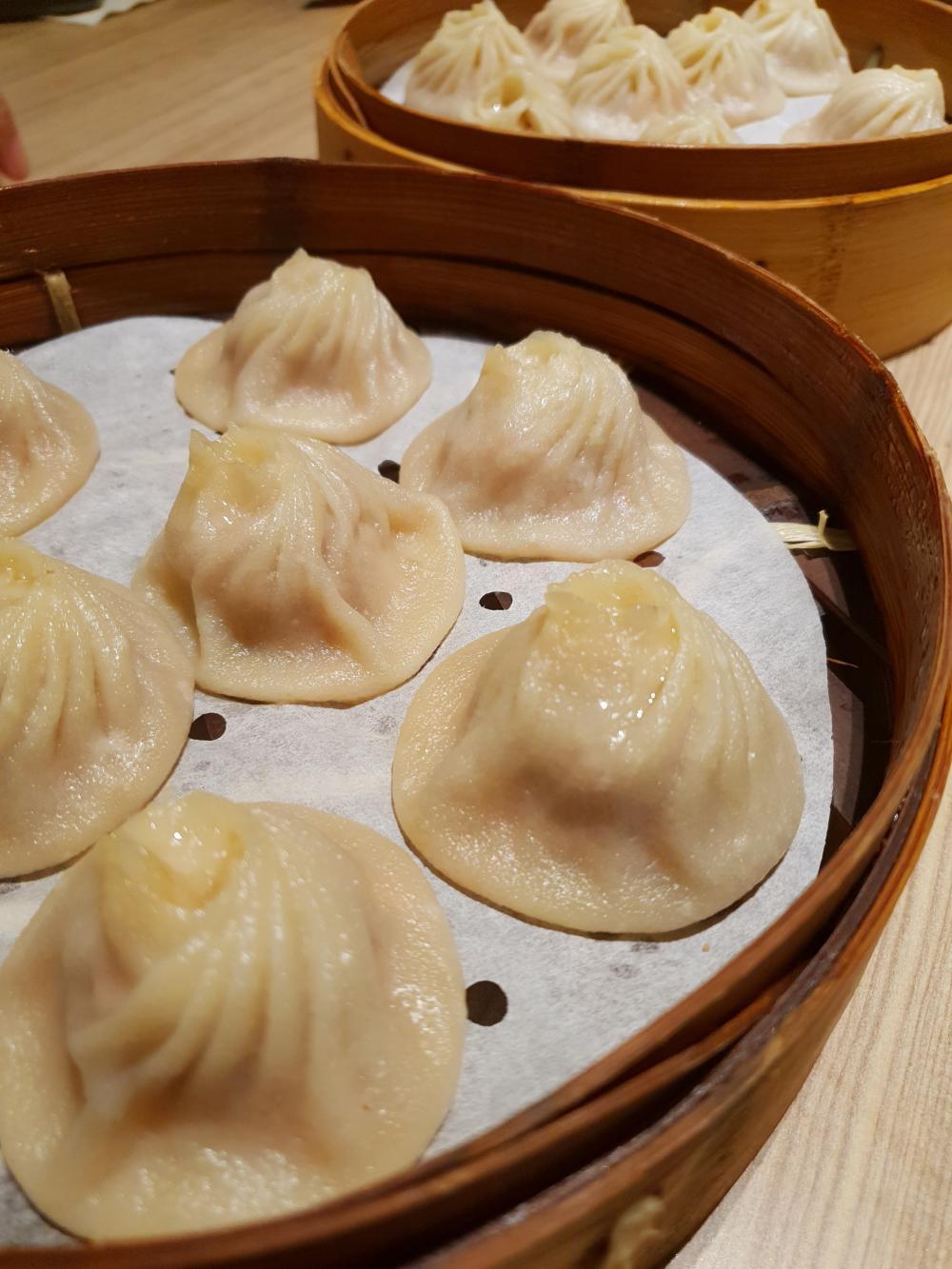 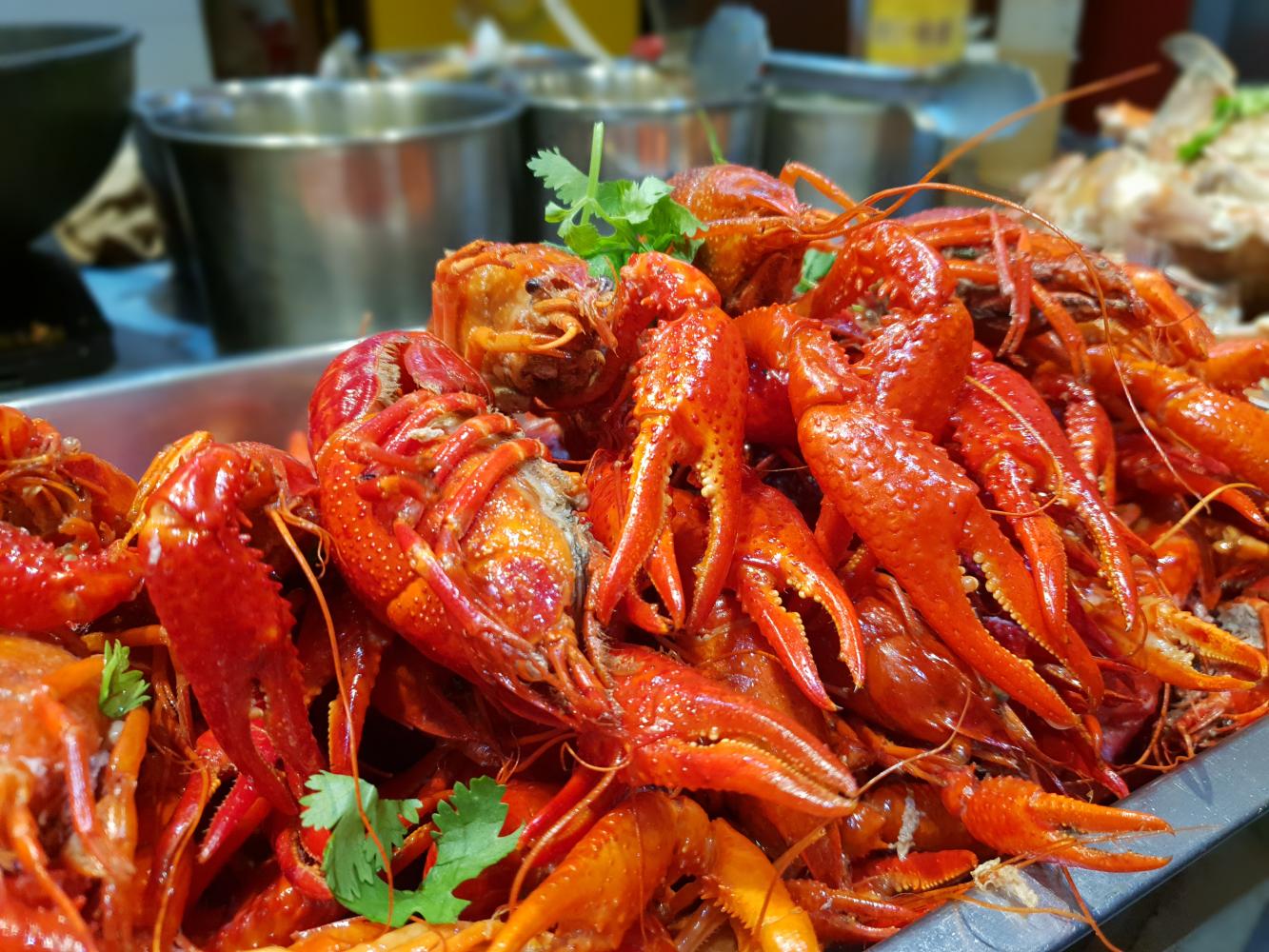 We dropped by Xi Hu, or the West Lake -- a place of picturesque and classical beauty that is also a Unesco World Heritage site. And that overcast morning, the lake and the pavilion fell into a grey gradient like it was drawn by ink at the hands of old master. While it was pretty crowded, the atmosphere around the lake was serene, with willows and lotuses adding green and specks of pink to the sombre grey.

At night, a bus brought us to Hefang Street for a place lined with antique buildings selling souvenirs and local delicacies. Souvenirs adorned with Chairman Mao's face seemed pretty popular. 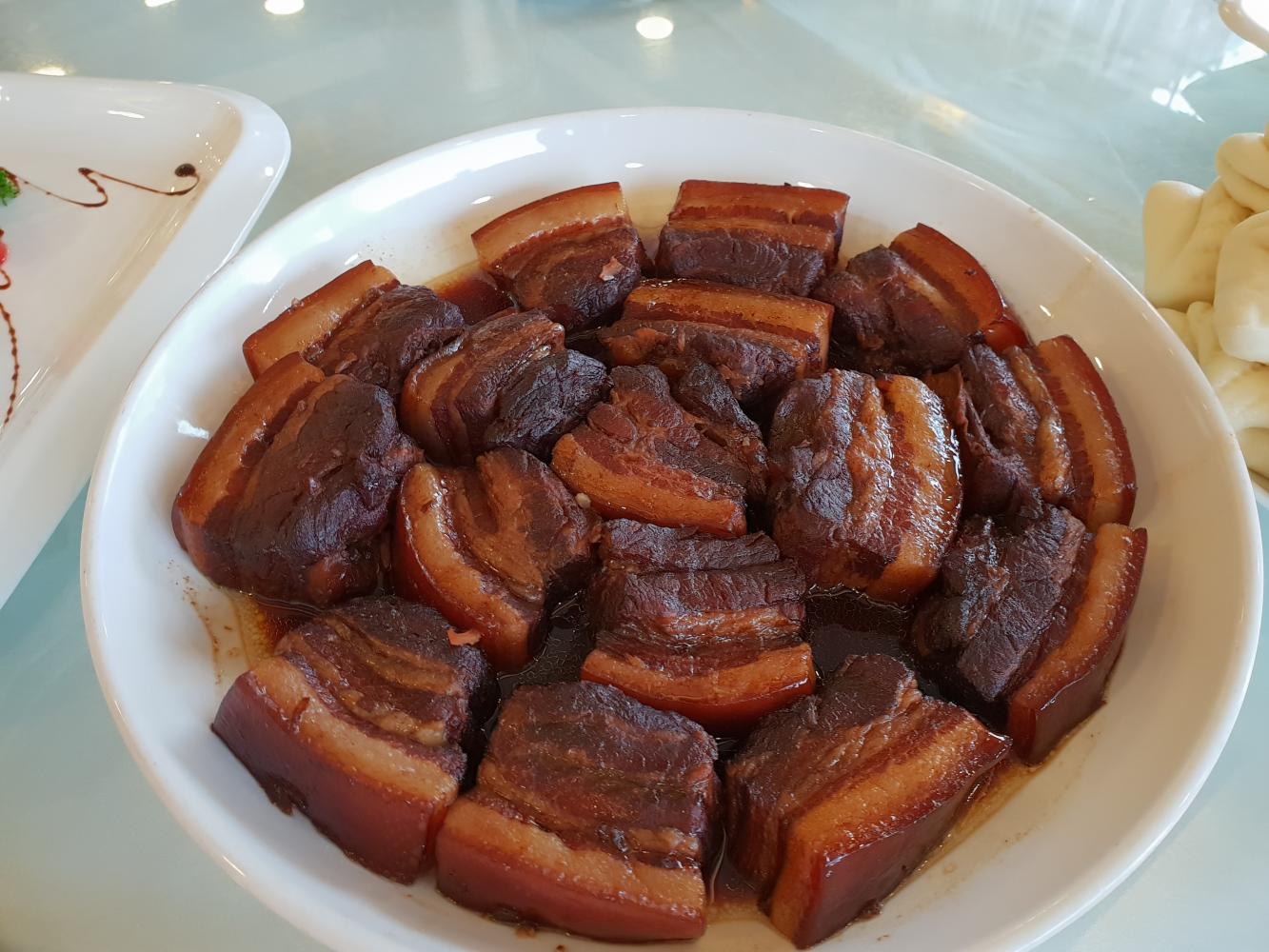 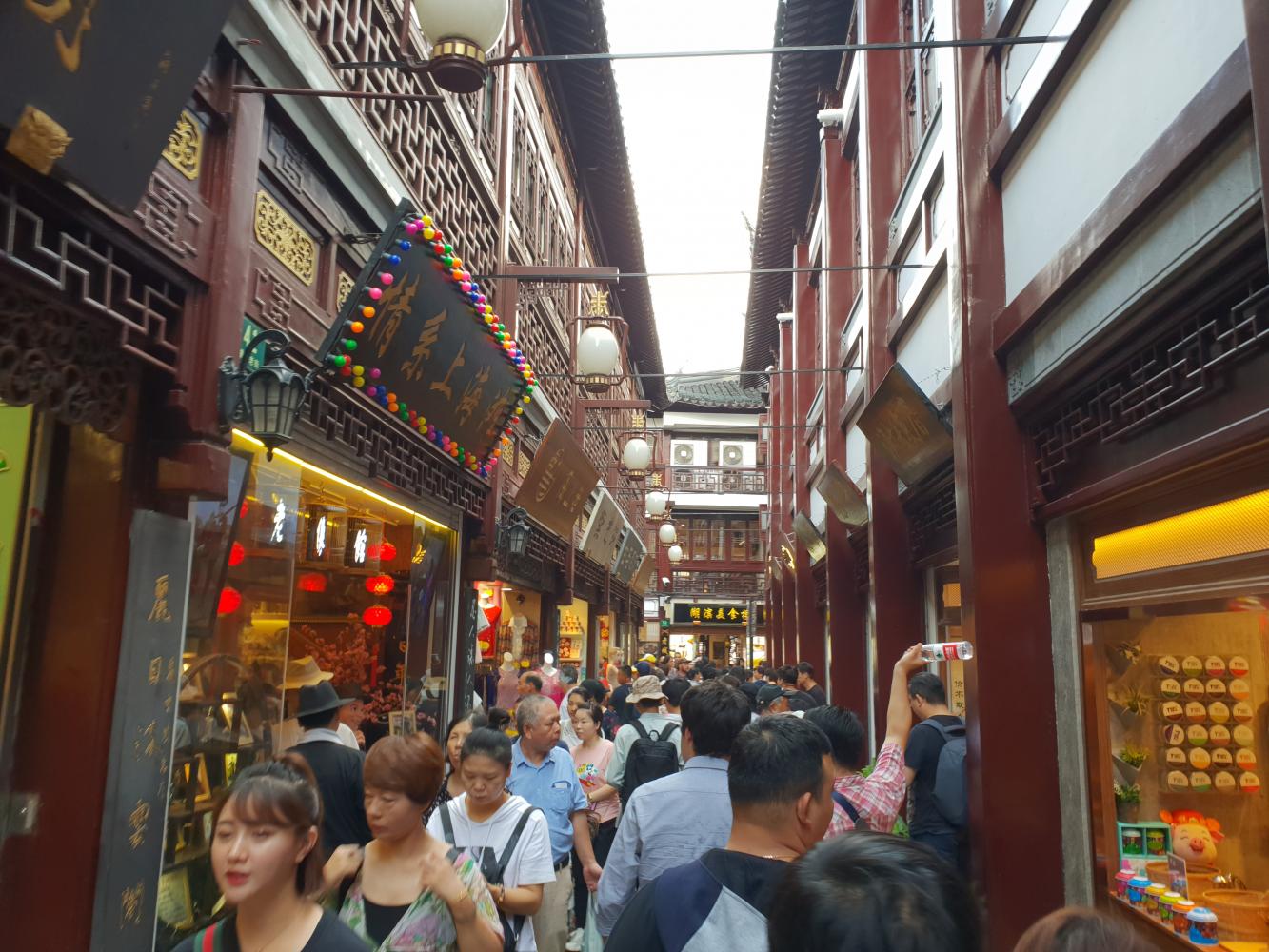 Inside the packed Yuyuan Garden Malls.

On any trip, a journey isn't complete without a taste of local cuisine. While most are easily likeable, a few can be difficult to embrace. We tried xiaolongbao (soup dumplings), which was great when we had it for breakfast one day. The braised pork belly known as Dongpo pork, named after the Song Dynasty poet Su Dongpo, was soft with both fatty and lean meat. 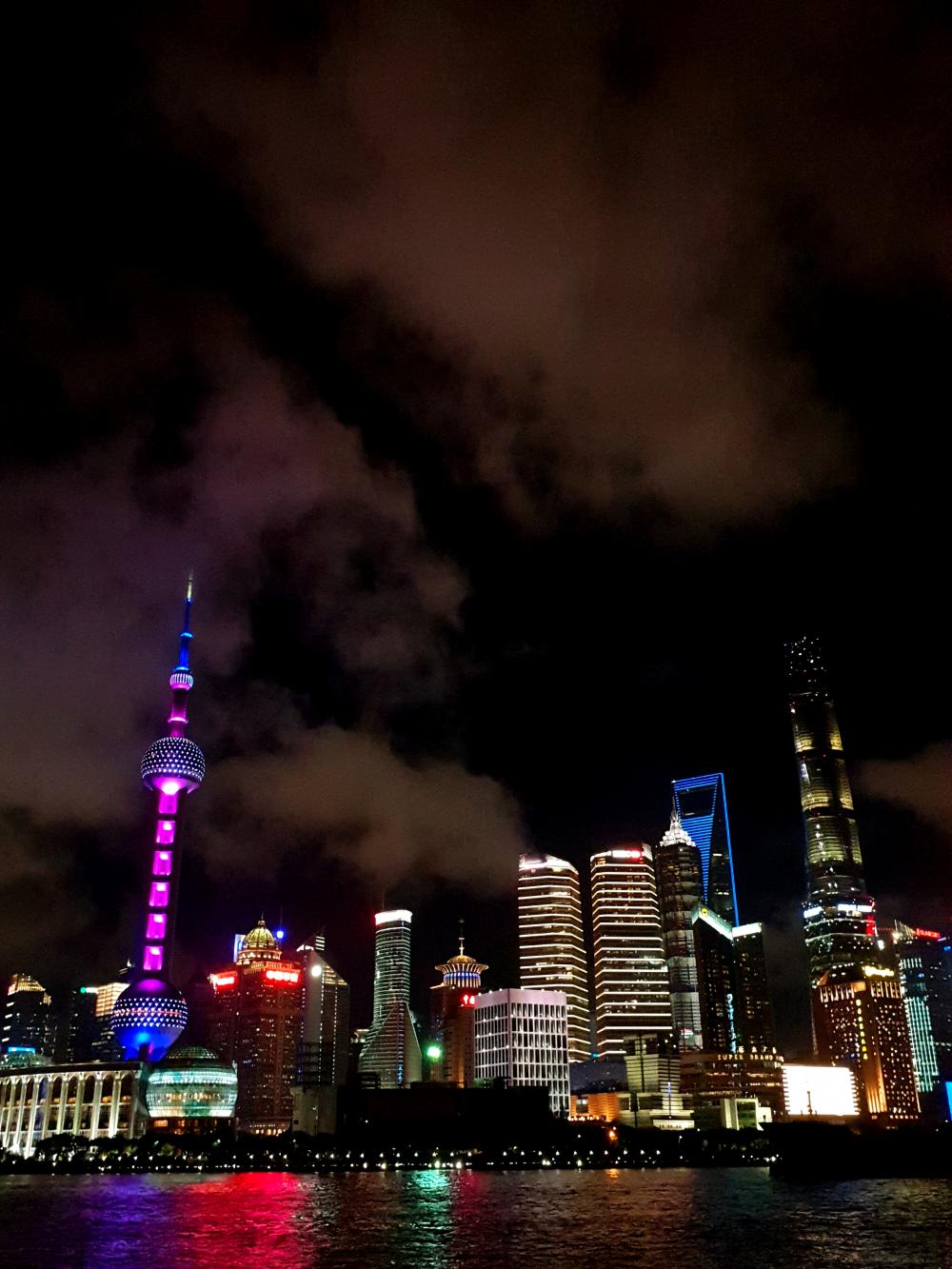 View of Pudong district from the Bund.

One dish that had everyone feeling hesitant was the hate-it-or-love-it stinky tofu. It wasn't too bad when deep fried, but really harsh on the senses when braised or stewed. The taste and odour stayed long on our palate after it was consumed. 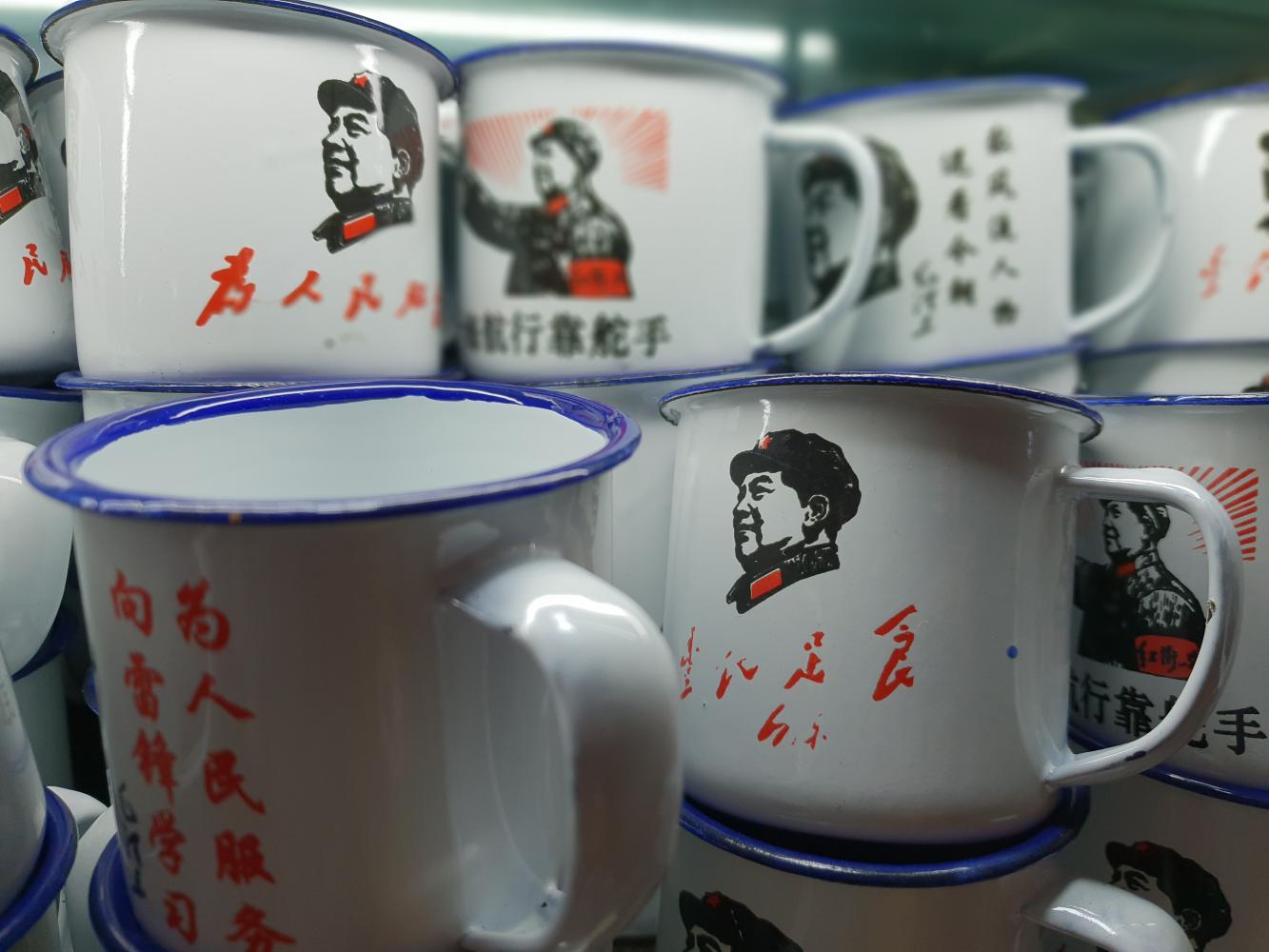 Souvenirs with Mao Zedong's face can be found in many places in China.

With limited time, we found ourselves too soon at the grand Hangzhoudong (Hangzhou East) station to catch a high-speed train to Shanghai Hongqiao station. It took less than an hour at the price of 73 yuan (about 312 baht) to get from Hangzhou to Shanghai. We ate Lay's potato chips with cucumber flavour to kill time, not managing to doze off in that relatively short duration. As the train approached our destination, we were all ready to break into the iconic theme song of the 1980 Hong Kong TV series The Bund, or as Thai people know as the "Godfather Of Shanghai". But we saved that for our bus ride to the hotel instead. 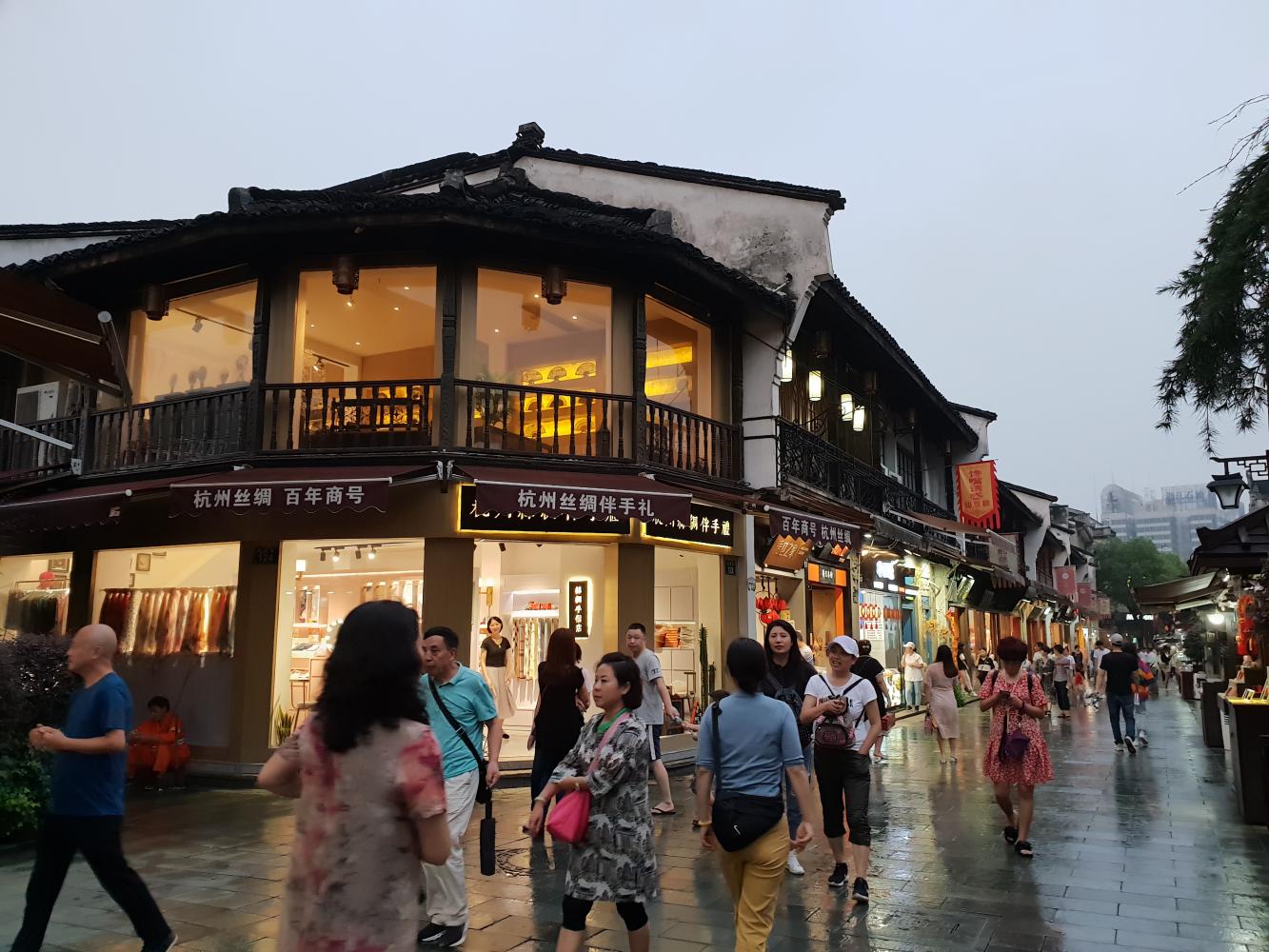 Shanghai was more vibrant and bustling compared to the calm and quiet Hangzhou. In subsequent days amid our busy work schedule, we managed to visit some of the city's highlights. The must-visit destination was, of course, the Bund, which inspired the aforementioned song.

At the Bund, colonial buildings along the waterfront were bathed in glorious golden lights at night-time. On the other side of the Huangpu River is Pudong district where skyscrapers were lit in colours of the rainbow. Remnants of the past came face-to-face with the future. The eye-catching Oriental Pearl Tower stood tall, as well as Shanghai World Financial Center that looked like a giant bottle opener, and also Shanghai Tower -- the country's tallest and world's second tallest building after Dubai's Burj Khalifa. 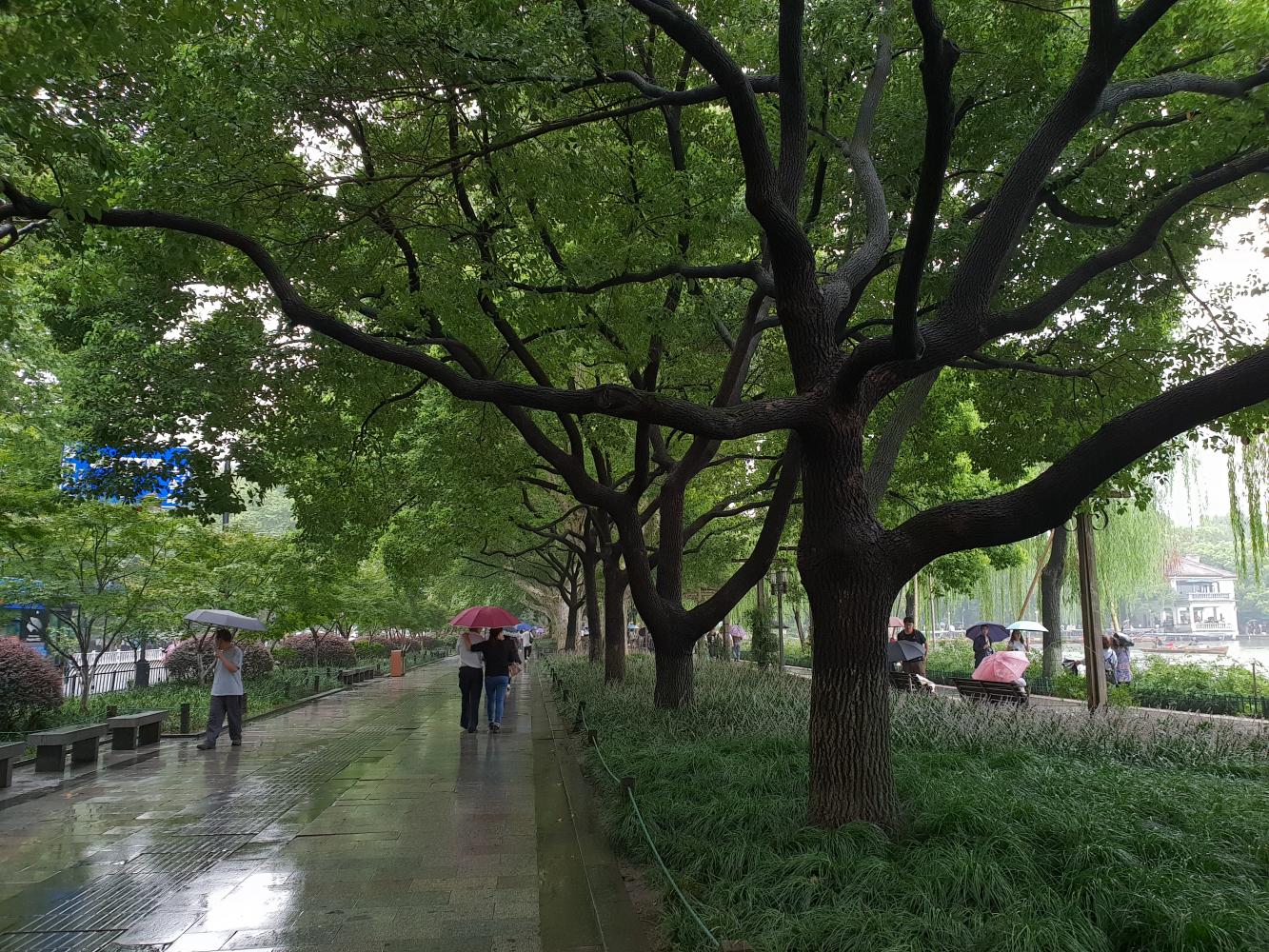 Tree-lined street by the West Lake.

The Bund waterfront was crowded, day and night. Walking along, it felt like Europe, but safer. We surely felt safe to walk about the city at night, starting from Nanjing Road shopping area and beyond. No pickpockets and thieves that we have heard of. However, a few guys in our group were approached by overly-friendly women, and we were later told it was likely they were cons trying to get men out for a drink and scam them for money. 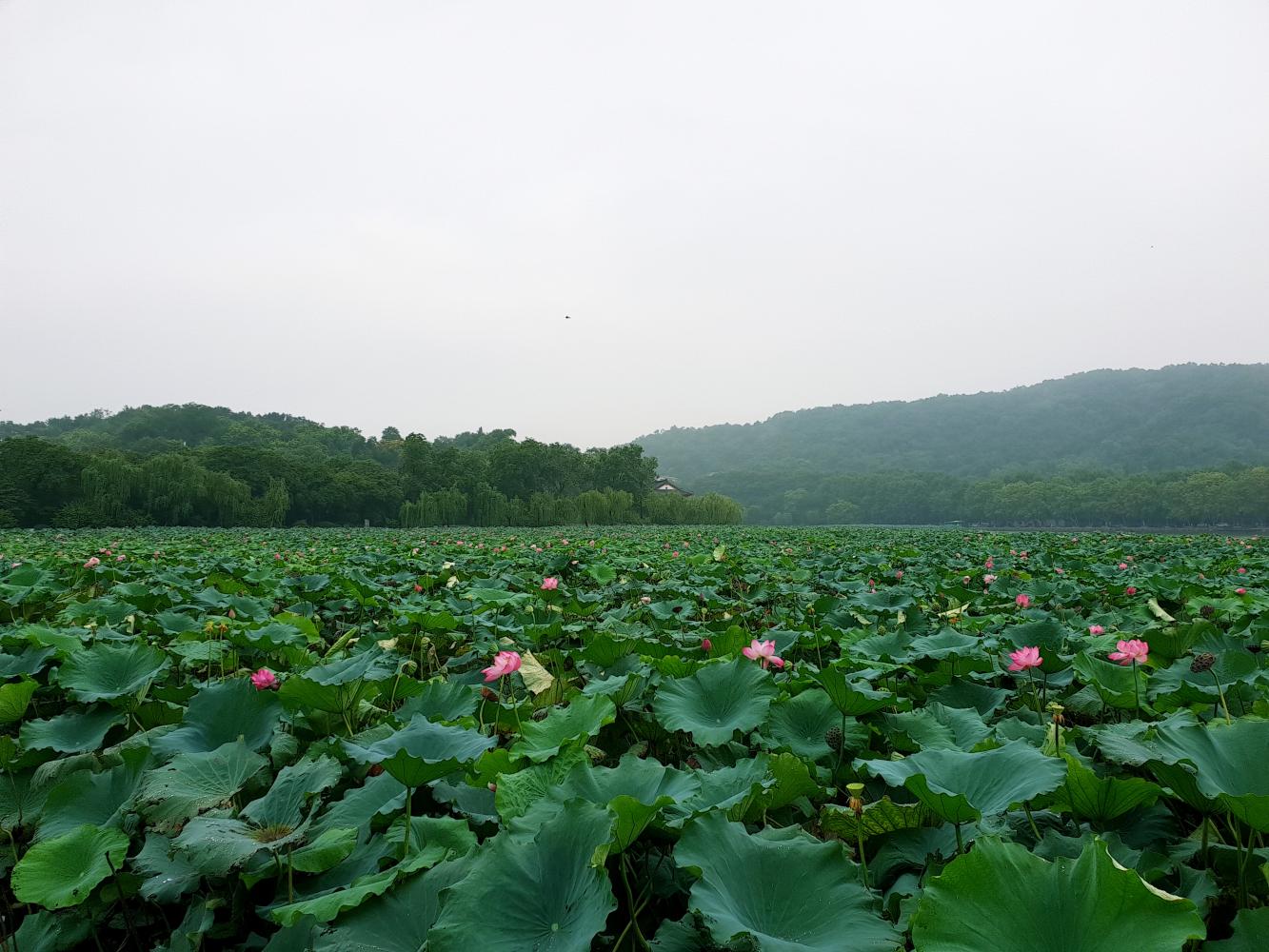 A part of the West Lake is packed with lotuses.

For a more classic and traditional Chinese experience, Yu Garden (or Yuyuan) was the place to be. It was built during the Ming Dynasty and now features a classical-style garden and architecture like those found in period or wuxia (martial heroes) TV series. The crowd was almost too much, though. It was too busy to really appreciate the place. And we retreated out to its surrounding shopping street, which was also crowded.

We filled our memory cards with countless photos along the trip. The travel sim card we bought from Thailand meant we were able to get on social media and posted pictures with no problem. Facebook, Instagram and everything else worked fine with our data roaming. No VPN needed. It would've been a different story if we were to use local Wi-Fi, however. 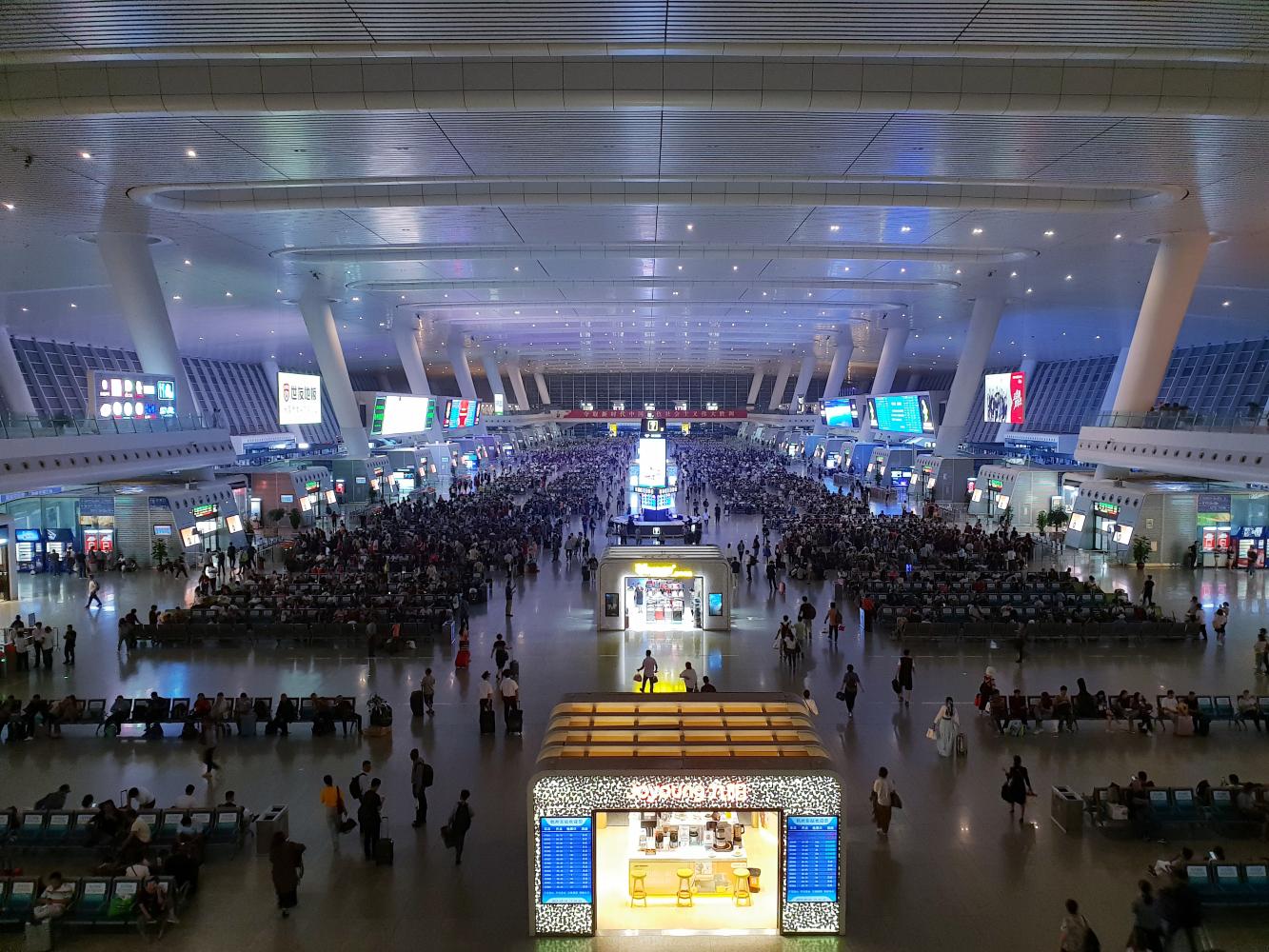 Another highlight in Shanghai (if you're a fan) is Starbucks Reserve Roastery, which was once the world's largest Starbucks. It was my first time trying nitro tea, which was velvety smooth and all-around splendid. It looked like beer in the photo, though. The place had a nice vibe to it and was crowded on the Friday night we were there. That was before a drunk guy came in with his friends. Very soon he dozed off, drooled and quietly vomited under the table near ours. It was just 10pm and clearly the party started early somewhere. We vacated the place soon after. 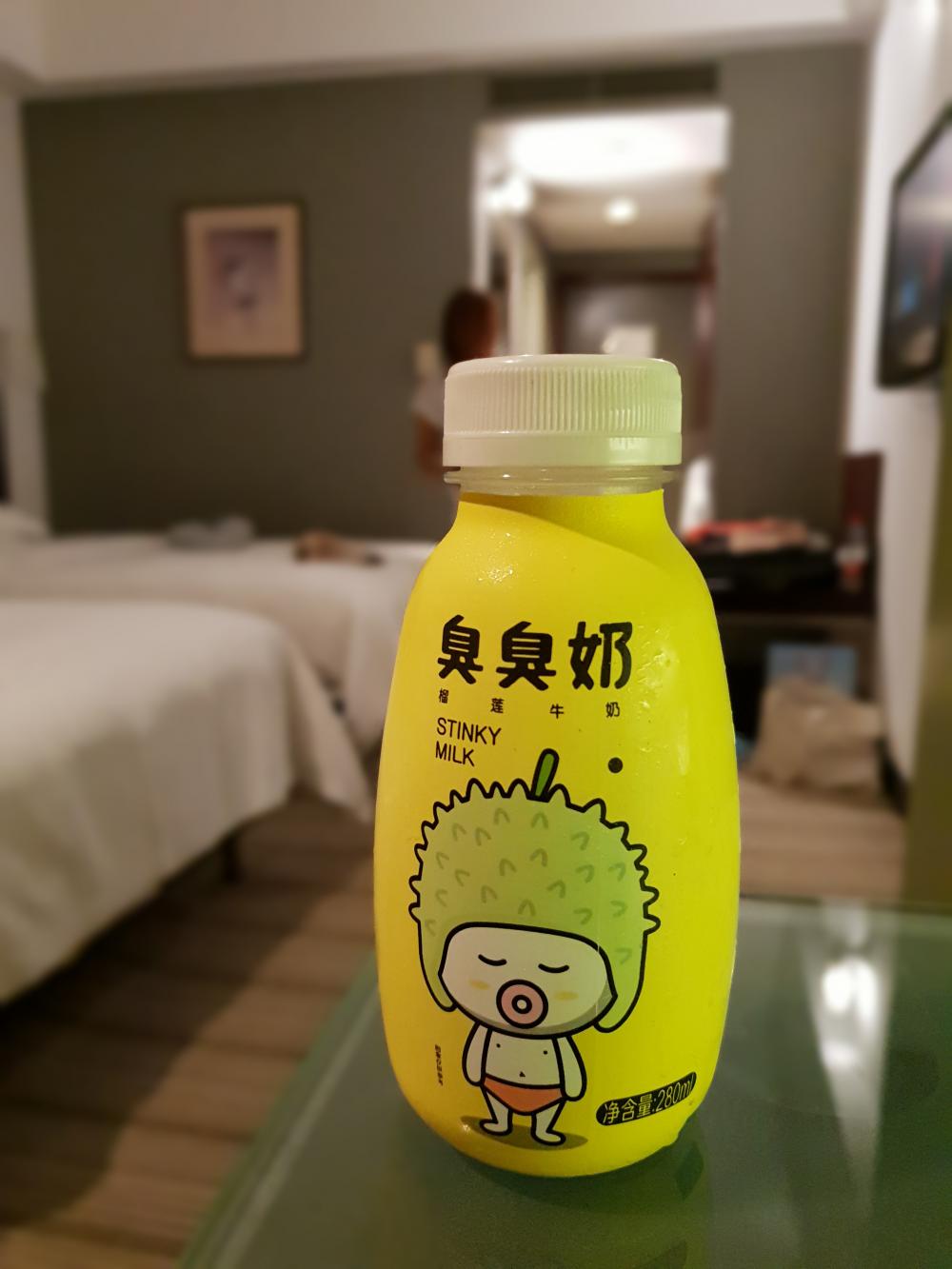 After a night out, we took the subway back to the hotel. And it was cheap, at just three yuan (13 baht) to go four stations. Outside the station, the smell of barbecue meat and vegetable topped with spices and chilli from the vendor drew us in for a late-night snack. The price started from two yuan (nine baht) per skewer. Communication wasn't a problem even though the auntie who sold it can't speak English. She seemed happy when we told her we are from "tai-guo" or Thailand, and she also accepted cash. After also buying other snacks like durian milk, grape-flavoured gummy, cup noodle, and Tsingtao beer, we finally called it a day.

Travelling in China, we only wished we had more time -- to see more, do more and experience more. What we had was simply a brief encounter with two cities -- a tip of the enormous iceberg -- that we can only promise ourselves to go back and discover more in the future. 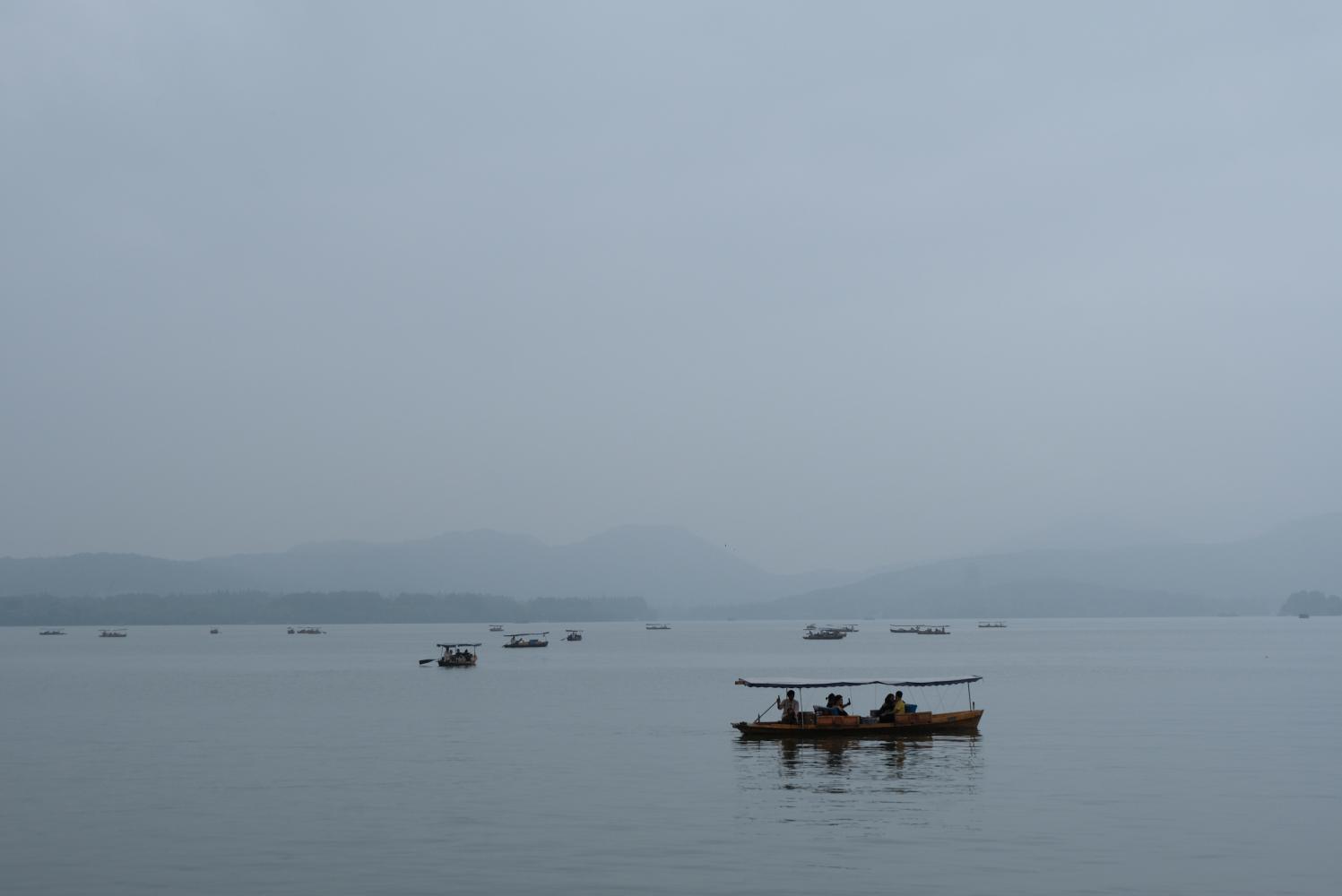 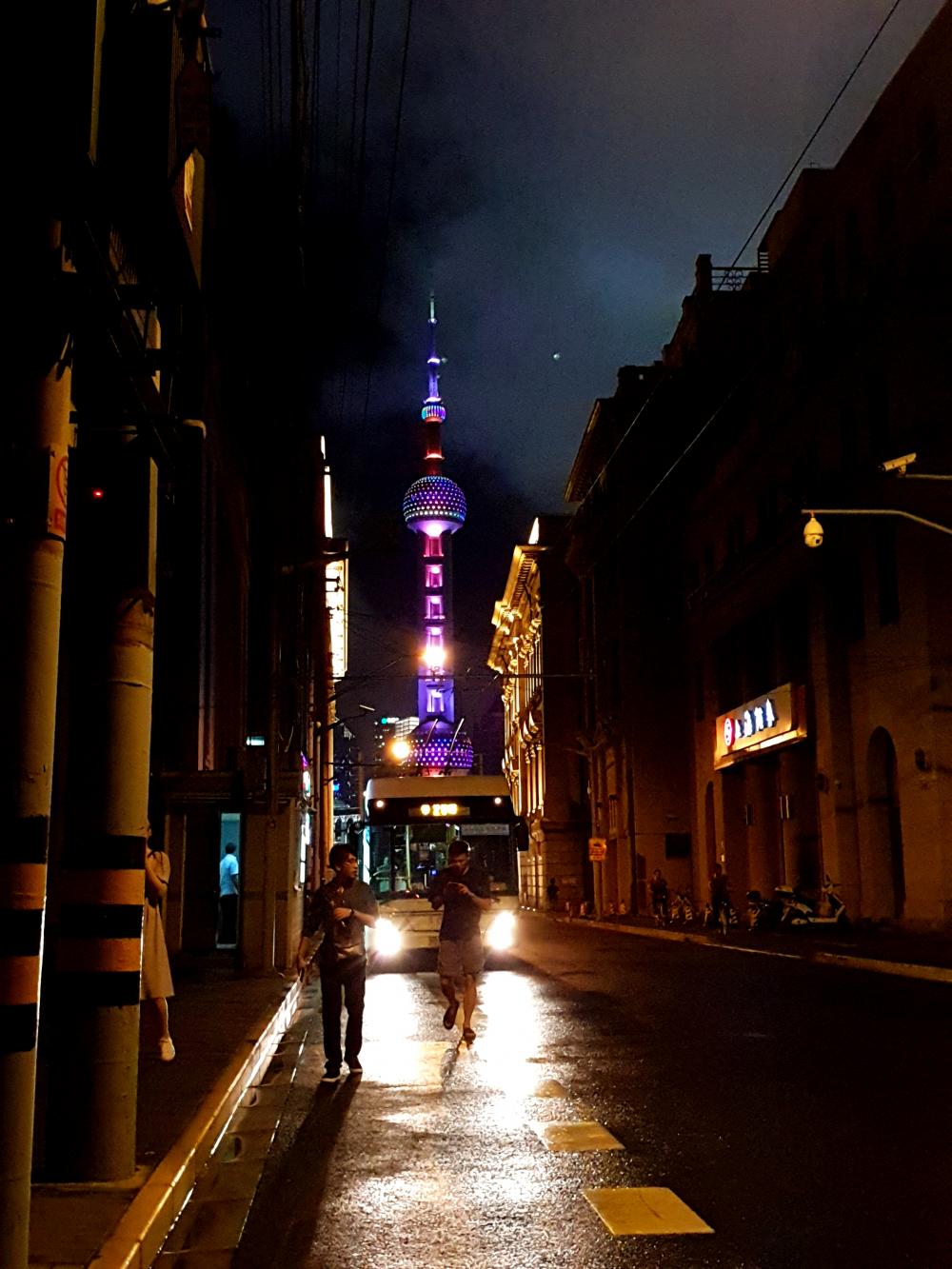 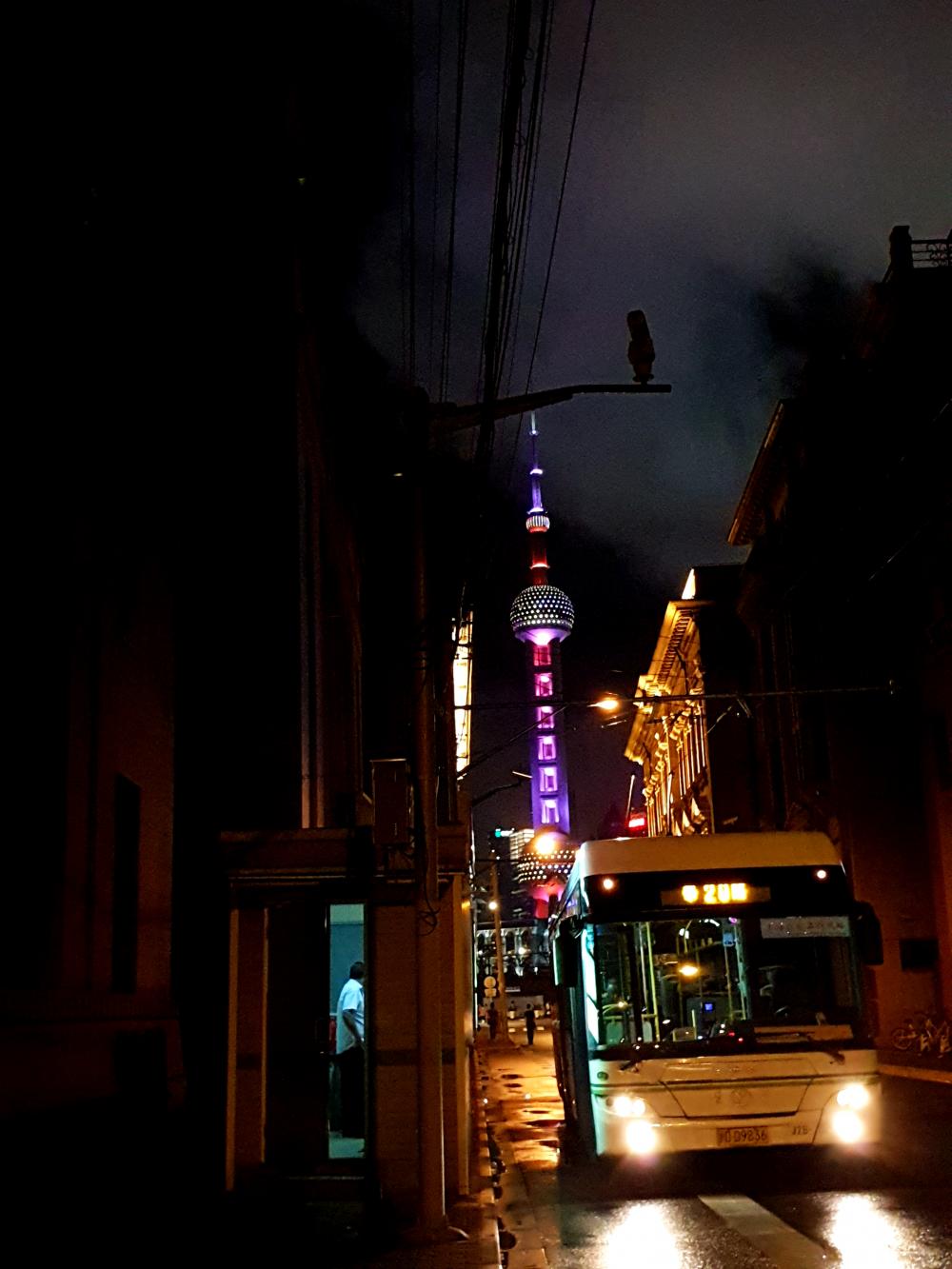 A view of the Oriental Pearl Tower at night. 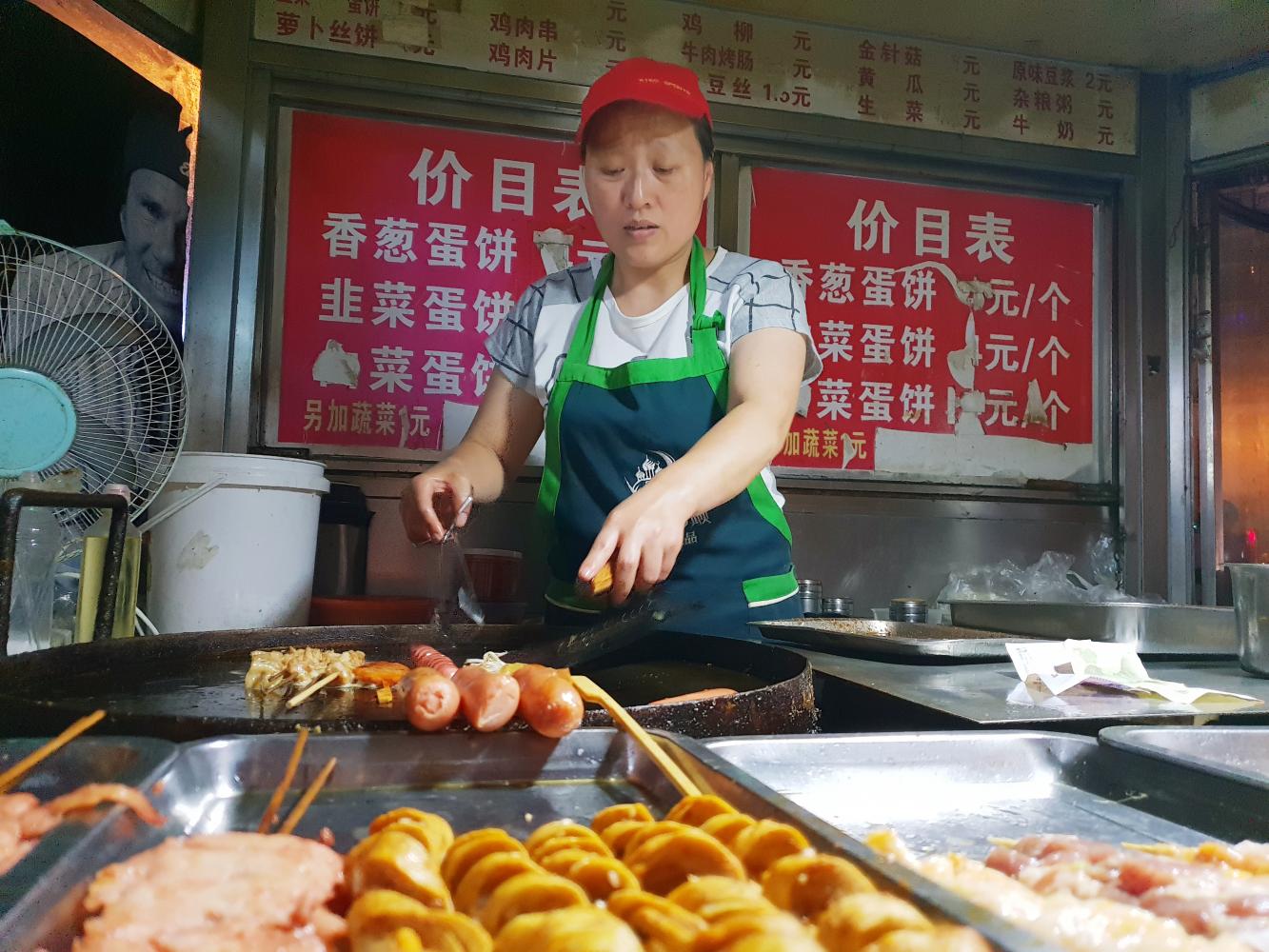 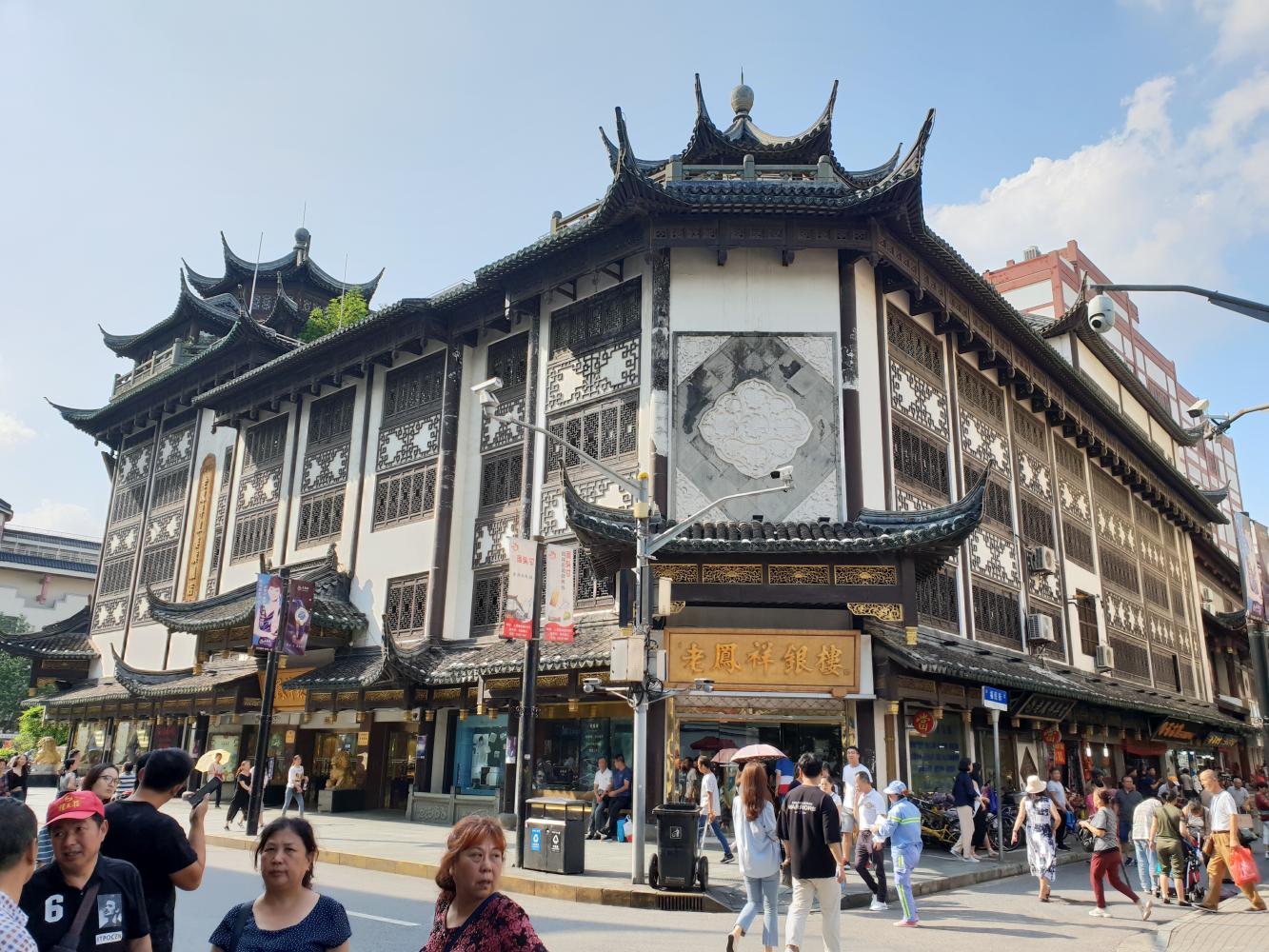 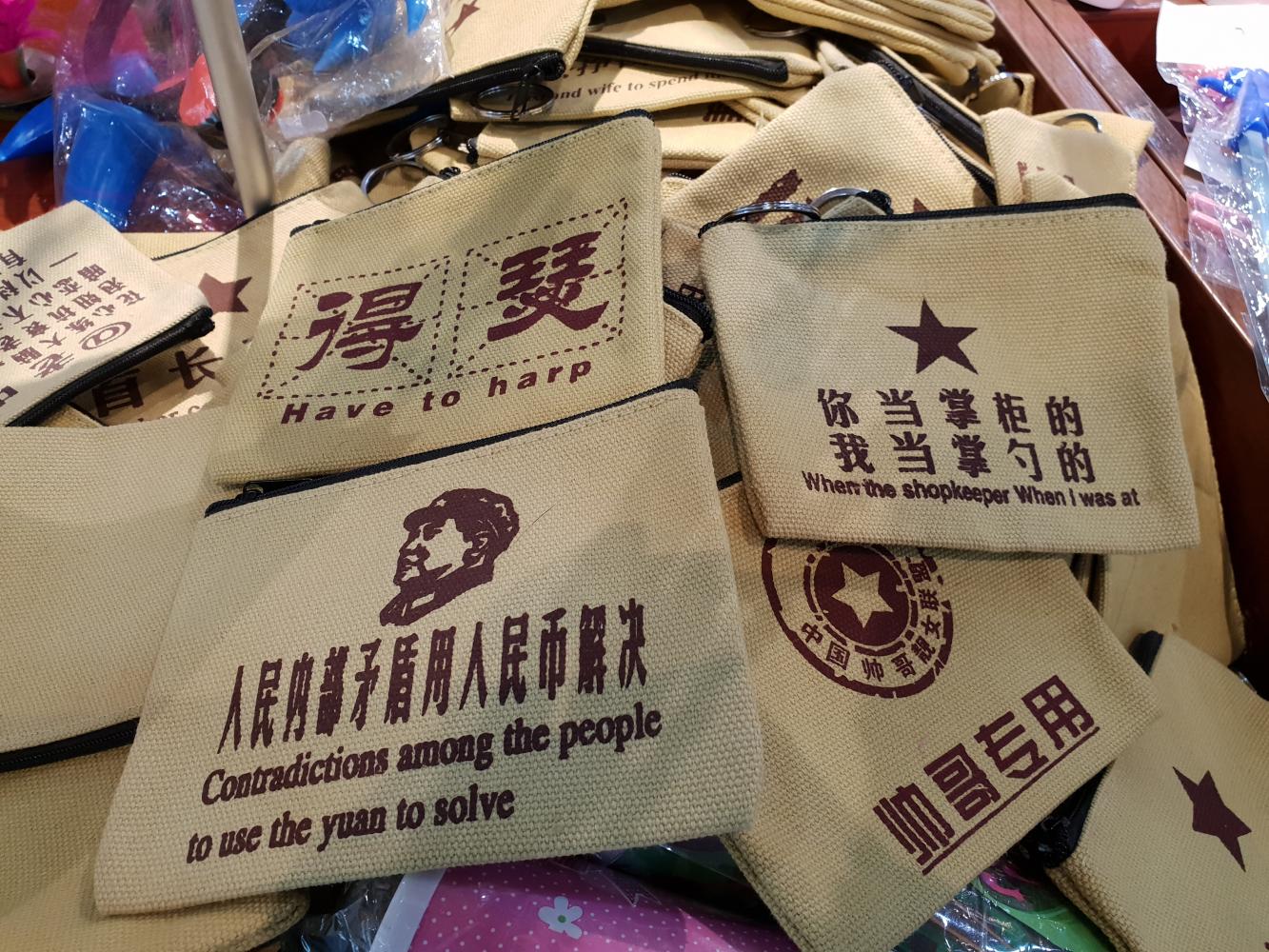 Souvenirs with Mao Zedong's face can be found in many places in China. 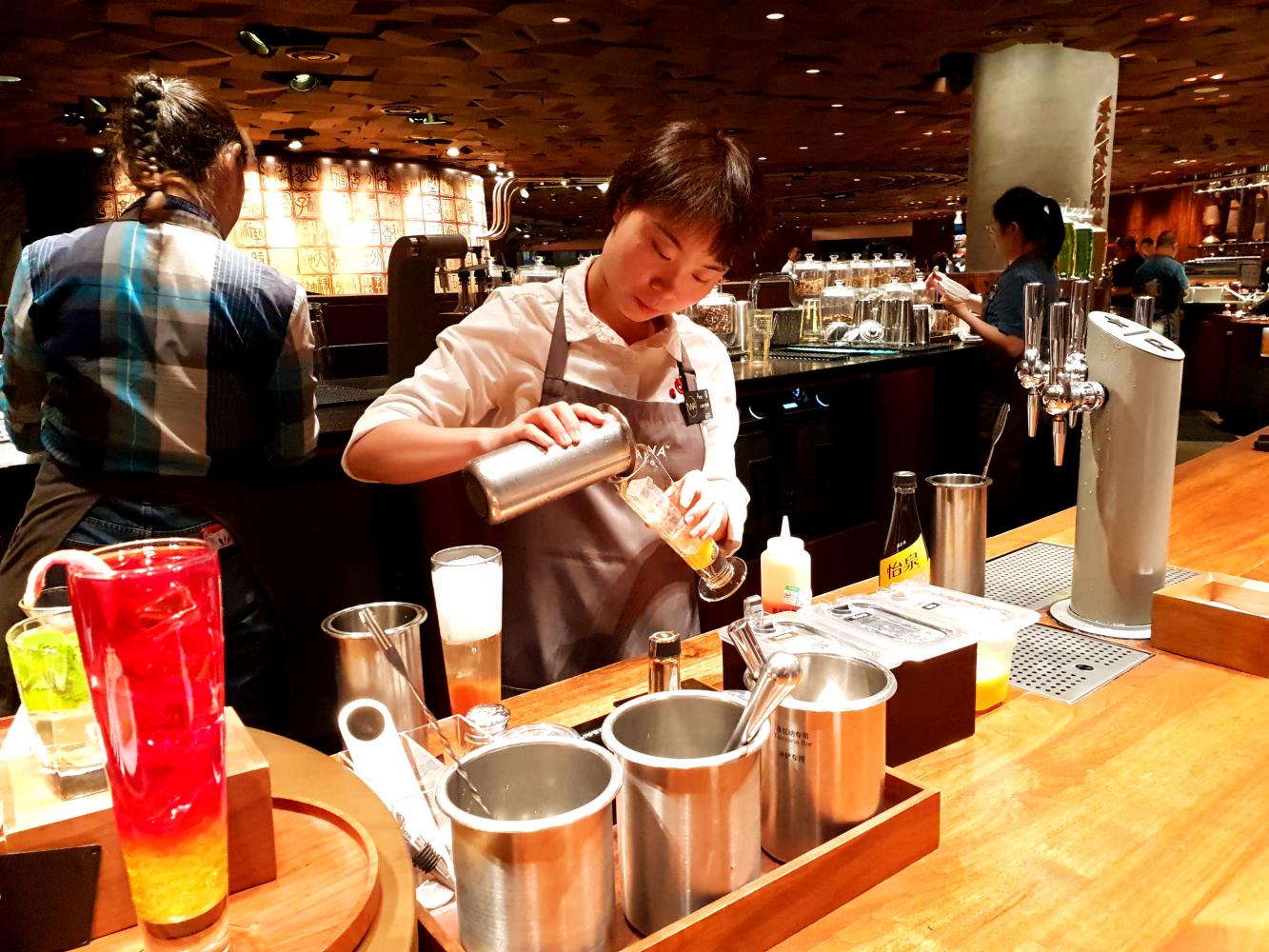 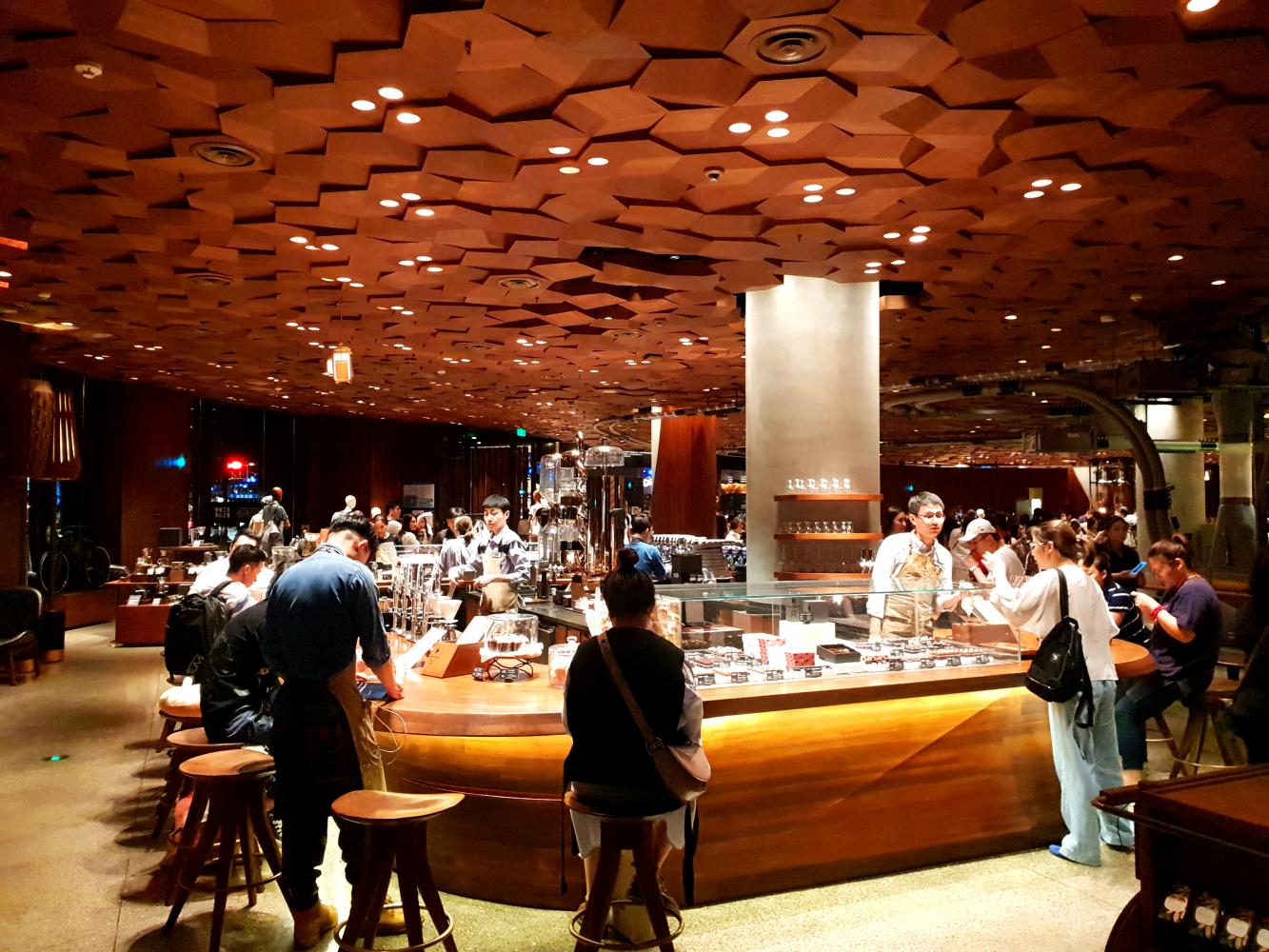 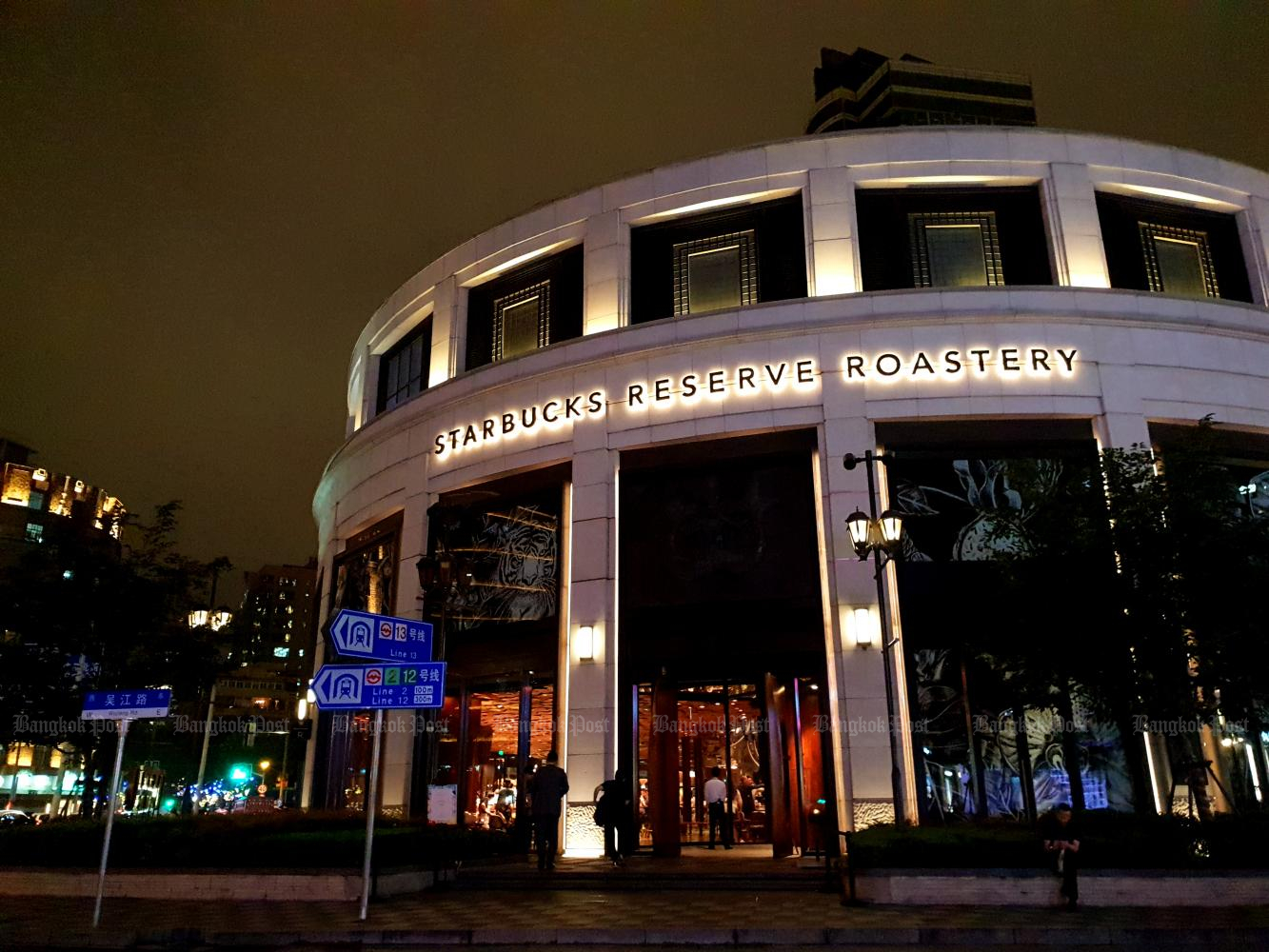 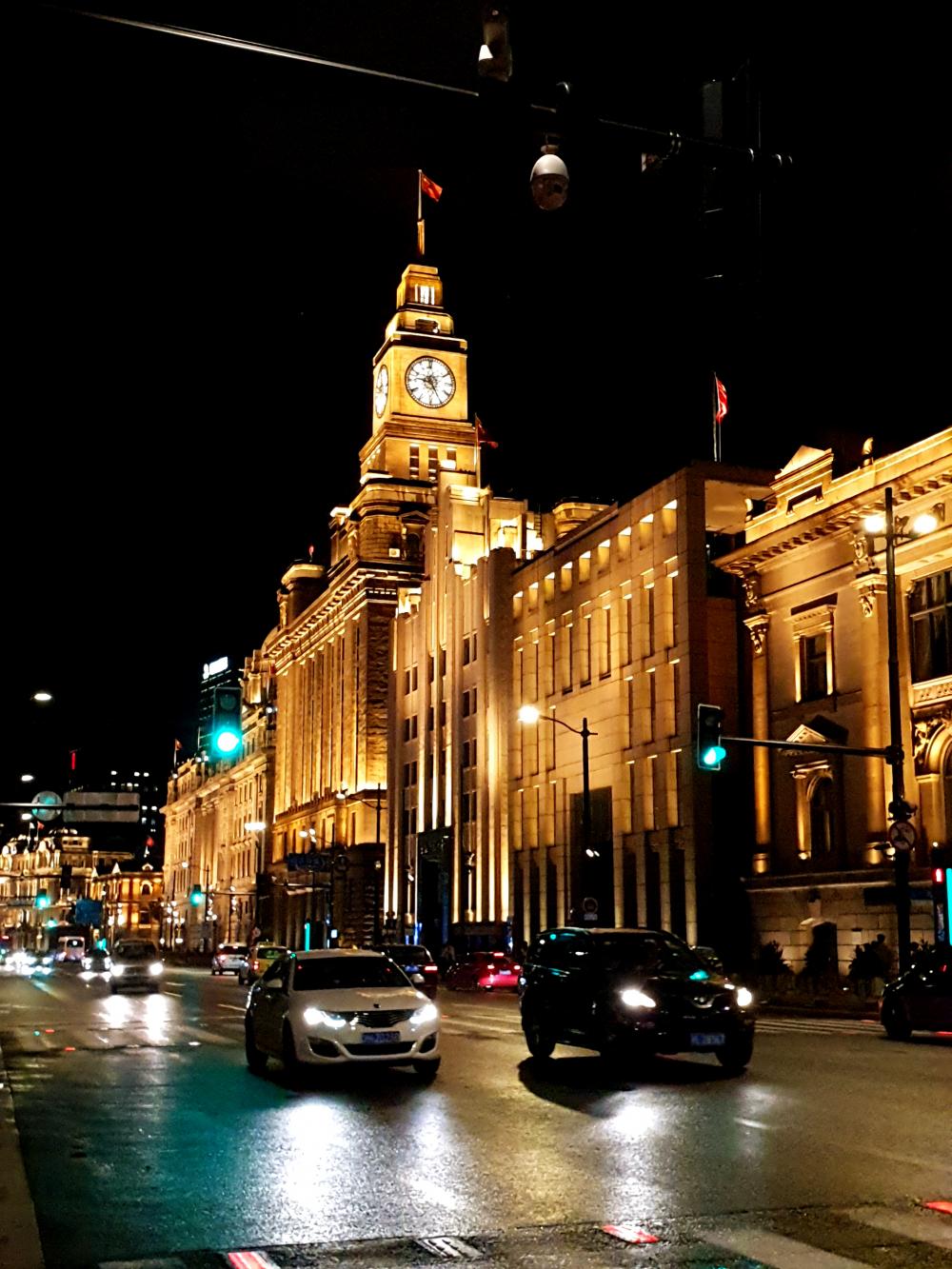