Peace in the valley

When the fog blankets the sleepy valley of Mae Chaem in Chiang Mai province in early November, locals brave the cold to prepare for one of their most important traditional celebrations.

The white dots of cotton bulbs grow alongside brilliant green rice paddies, ready for the annual kathin ceremony. To mark the end of Buddhist Lent, devotees offer new robes and utensils to monks. However, in the remote community of Baan Yang Luang, they do things a little differently.

Instead of buying new robes, they gather to make robes within the space of day, believing that this practice brings better fortune. Locally, the festival is called "Kathin Laen" or "Chula Kathin". Thanks to the weaving tradition that survives in the valley, Chula Kathin remains alive in Mae Chaem, unlike much of Thailand.

The parade circles the chapel three times before the venue is filled with smiling locals ready to make merit. Peerawat Jariyasombat

Nestled in a valley next to Doi Inthanon, Thailand's highest peak, Mae Chaem's remote location has enabled the community to preserve its weaving heritage. Applying techniques handed down through generations, local weavers specialise in tube skirts, the bottom parts of which are adorned with vivid embroidery. The skirts, called teen jok, are extremely complicated. Even a veteran weaver can make only a few centimetres in a day.

Thus, Mae Chaem's tube skirt is honoured as a local heritage, and one of the most prized tube skirts of the North. During festivals and special occasions, the vibrant colours of teen jok can be seen throughout Mae Chaem. 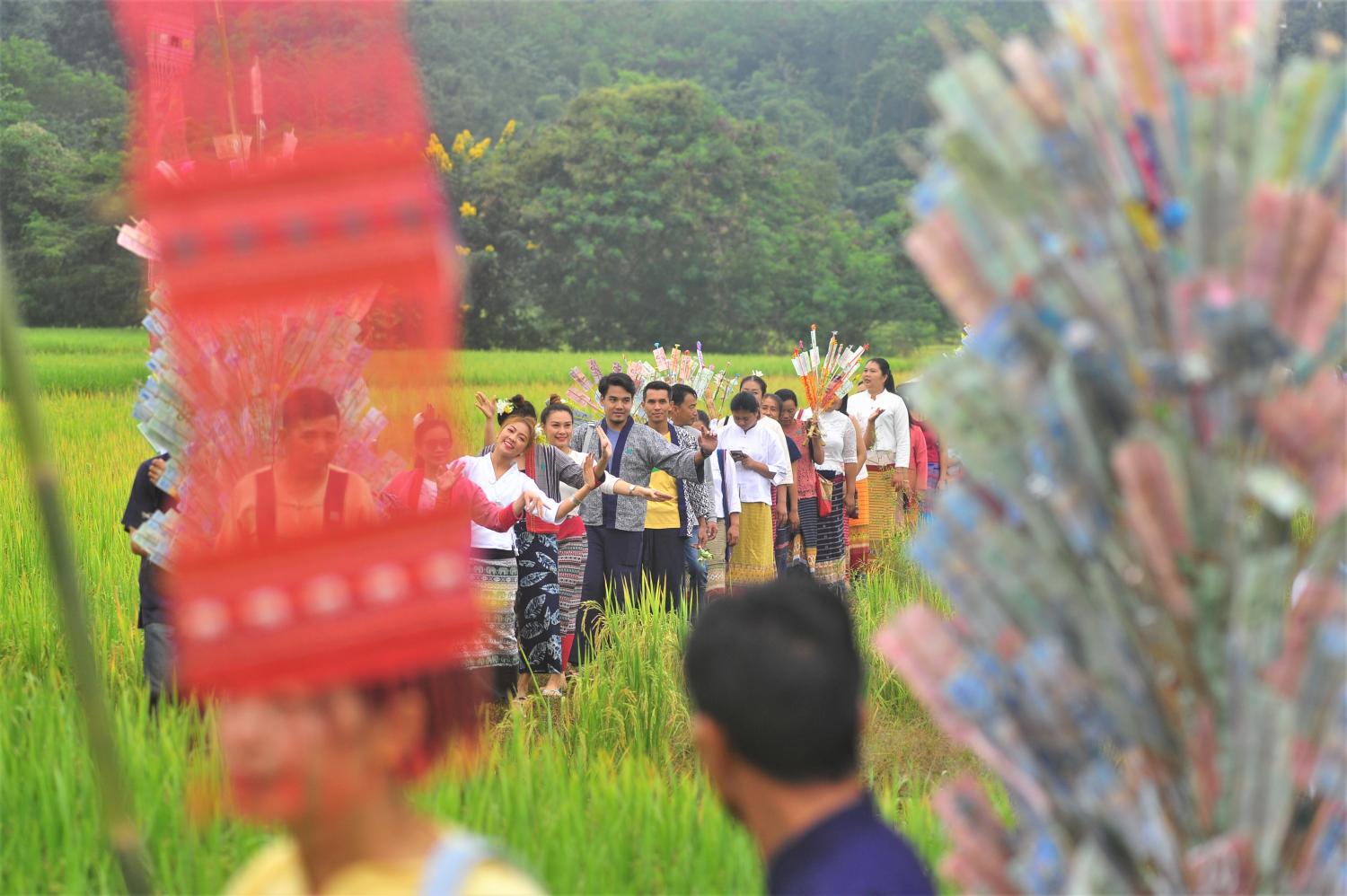 The parade of villagers makes its way through the rice paddies. Peerawat Jariyasombat

On the first day, cotton bulbs are handpicked by local girls and quickly processed by villagers. The veteran weavers of Baan Yang Luang then work their magic, transforming the cotton into new robes for the monks. That the whole complicated process is completed within a day is testament to the harmony and devotion within the weaving community.

While the monks and local men prepare the temple for the ceremony, mothers and daughters help to prepare the cotton. Village cooks prepare a grand feast for all. Grandmothers and grandfathers show up in their best attire, the grannies in their finest teen jok patterns. 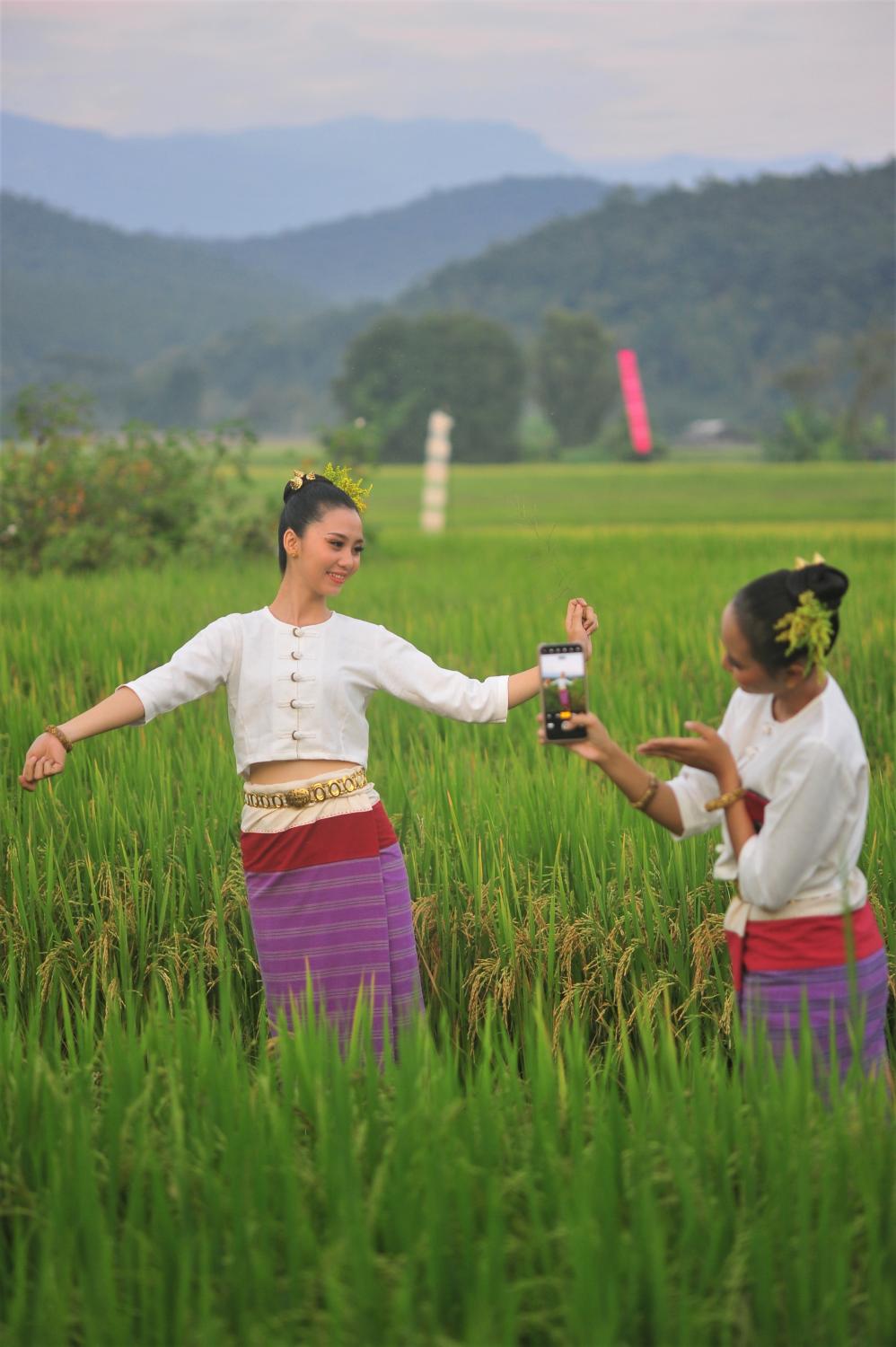 The ceremony has been carried out for hundreds of years at Wat Yang Luang, an old Buddhist temple hidden in the small village. Dating back more than five centuries, Wat Yang Luang was originally built by devout Karen people. Its chapel mirrors represent a beautiful mix of folk art, Lanna and Burmese architecture.

Having had a chance to recover from the exploits of the previous day, the villagers gather again at dawn the following morning, preparing to return to the temple in their best costumes. The ladies, naturally, show up in their finest tube skirts. Flowers and brass hair pins adorn their hair knots to honour the gods that protect their heads. Bamboo baskets filled with fresh flowers picked locally are presented as offerings to Lord Buddha.

Before the ceremonial rite starts, a local band fills the air with an easy rhythm. Traditional dancers set up in a line and lead the parade through the rice paddies. 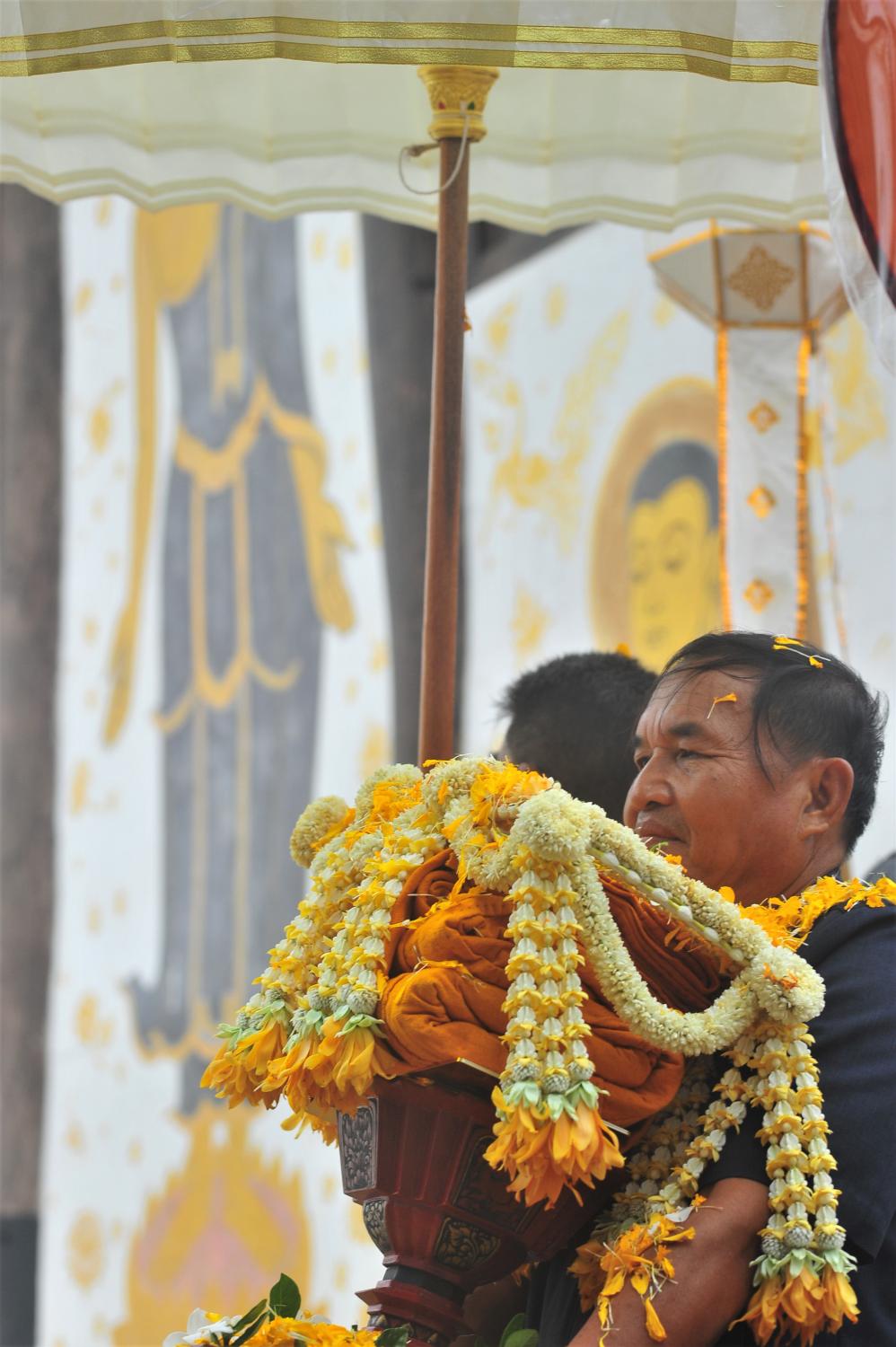 The robes are ready for the kathin ceremony. Peerawat Jariyasombat

Mae Chaem is a picturesque valley full of terraced rice paddies interrupted by the occasional village or hamlet. In early November, the green paddies begin turning yellow, making it one of the most beautiful periods of the year.

If you stand in the right spot, you can take in the whole of Doi Inthanon in the east, with two pagodas visible on its right shoulder and the tiny white line that is Mae Pan Falls in the distance.

Visitors witnessing the scene as the ­parade cuts through the paddies are struck by its beauty and vibrancy. With all the ­locals dressed in their distinctive costumes, dancing through the dramatic countryside, Chula Kathin is a ceremony that onlookers can't help but feel a strong desire to be part of.

At the temple, before the rite, the parade circles the main chapel three times. The atmosphere is one of pure celebration, everyone dancing happily to the lively rhythm, smiles and laughter filling the air.

The celebration may be rather small when compared to the grand, opulent displays common in big cities. But there is something uniquely special about Chula Kathin and the great faith, heritage and harmony of this small village community in a remote valley. 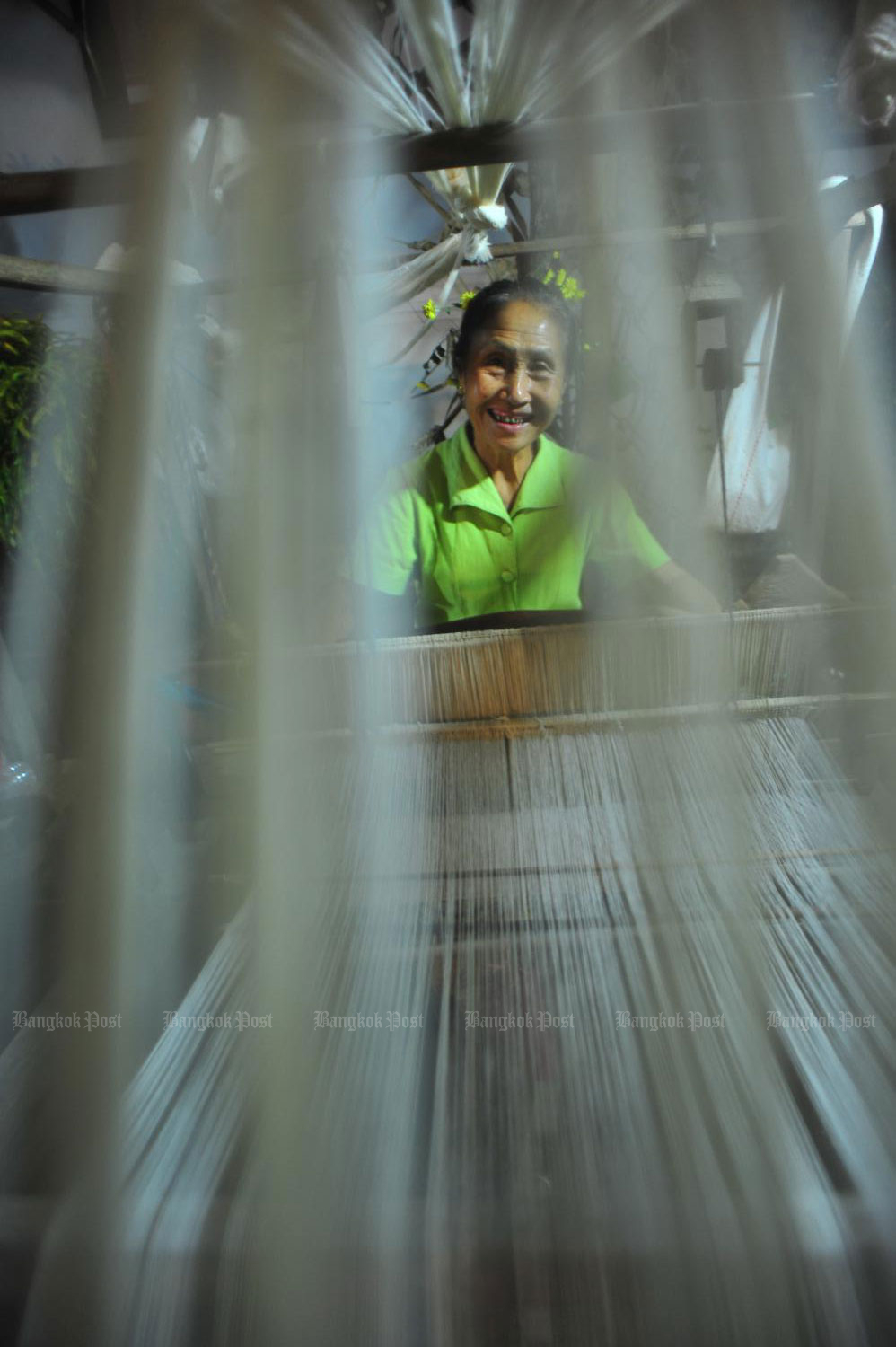 A weaver from Baan Yang Luang works at her loom. Peerawat Jariyasombat 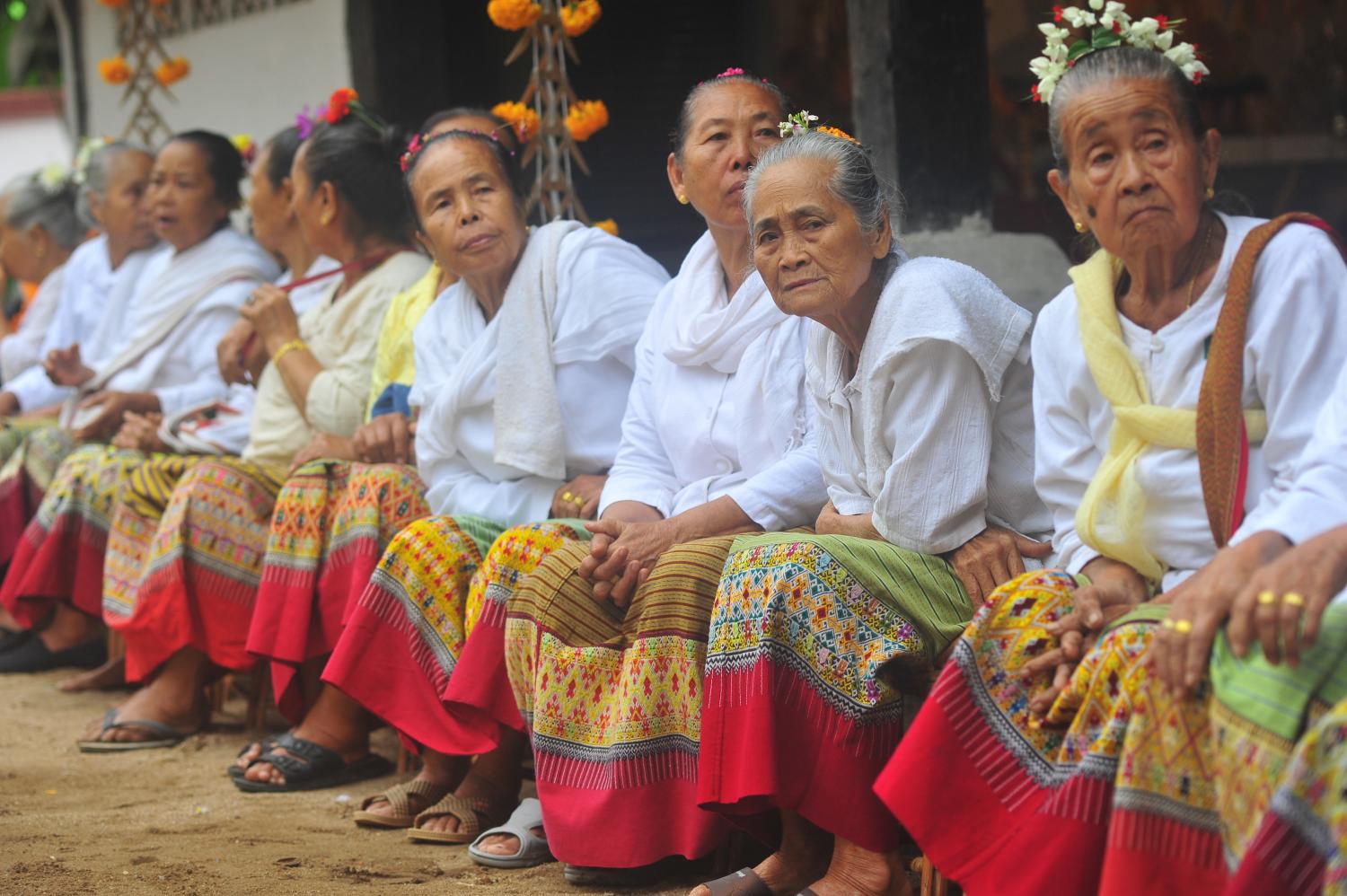 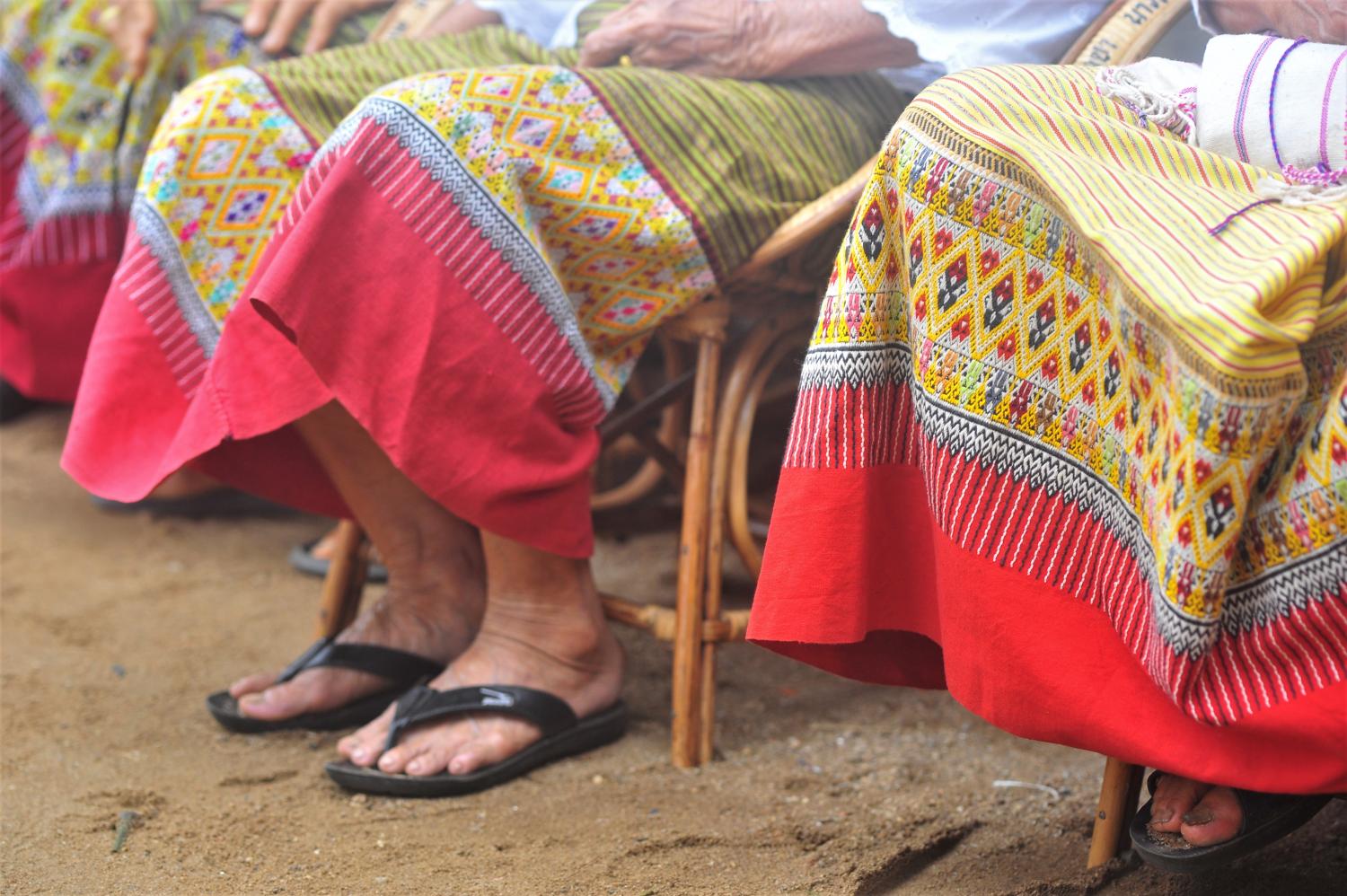