Sipping tea in the forest

Tea pickers, each having a bamboo basket on one side, walked in a row on their way out of a tea plantation. It was late afternoon. The sky was clear and the sunlight was about to turn yellow. My travel companions and I ambled along the same road but in the opposite direction of the tea pickers. We were on our way to the tea farm to have our tea-picking experience.

We made our way to Araksa Tea Garden, the organic tea plantation in Chiang Mai's Mae Taeng district about a 90-minute drive from the city. At a glance, the tea plantation looks different from others I have visited, like those in Chiang Rai and Sri Lanka. The tea garden of Araksa is surrounded by tall trees. It looked much like a forest.

"I wasn't aware that the site was a tea plantation when we bought the land in 2014," recalled Chananya Phataraprasit, executive director of Araksa. Her company, which also owns the nearby Lisu Lodge, bought the 300 rai plot of land because she liked the pink flowers of the gliricidia trees (or ton khae farang in Thai). "It was beautiful like sakura [cherry] blossom," she said.

At first, she didn't plan for tea production until she tasted the tea. The smooth taste and the unique fragrance inspired her to put in an effort to learn everything about the business.

"I later realised that the site is the oldest tea plantation in the Kingdom that has grown tea plants [Camellia sinensis] for trading," she said.

The plantation was once a supplier of Raming Tea, the pioneer in tea production in Thailand. It was abandoned for years. Some parts of the tea plantation had been deserted for more than 15-20 years, she said.

The tea shrubs are widely covered with vine. The chemical-free land made it easier for Araksa Tea Garden to apply for organic certifications. Today the company has organic certifications for its tea plantation, tea production and plants from the Department of Agriculture in the United States, or USDA, and European Union.

It started the first production of black tea three years ago. The first tea it produced is called Preserve tea, which is the meaning of Araksa.

"We want the name to reflect our objectives, which are to preserve nature and the environment by applying organic farming as well as to take care of local people. We employ them as tea pickers," she said, adding that they were ethnic groups like Lahu, Akha and Tai Yai who live in nearby communities.

We were about to learn how to make green tea.

"We can produce every type of tea from one tea plant. It depends on where the leaves were plucked and the process after picking them," said our guide. The process is known as oxidation, referring to the period of times that tea leaves are exposed to oxygen. A longer time will result in darker tea and deeper flavour.

White tea is made of young leaf buds, known as "silver tips", while black tea is made of a couple of tea leaves. For the green tea, we are told to pick one bud with one leaf.

It was fun for me to search for young buds from this and that tea shrub. The plantation has about 100,000 tea plants. Only one shrub can give us a handful of young leaves. After harvesting, we gathered the leaves in a bamboo tray. Green tea does not need the process of oxidation so we roasted the leaves right away in a wok over a charcoal stove until they were dry.

Next in the programme was to experience tea tasting and dessert pairing. Our pastries were put on one plate along with nine small tea-tasting cups. Our first cup was Arun tea. It was a white tea made of young buds which were harvested early in the morning. The tea house has Sayan tea which is also a white tea, but the young buds are harvested in the afternoon. It is said that the latter has a stronger flavour than the Arun tea.

"To taste the tea, you sip it a little bit and keep the tea in your mouth while breathing in. You will be able to detect its fragrance and flavour," said Chananya. Then we took turns to smell the soaked leaves.

"White tea and green tea have a level of caffeine as high as coffee while black tea has little caffeine, which is almost like decaf coffee. People perceive that dark tea has more caffeine than other types of tea because of its bitterness. It is not true. It has nothing to do with colour," she said.

Each type of tea has its own health benefits. Green tea and white tea are good for the heart while black tea is good for digestion. After tasting all the tea including Thai milk tea and butterfly-pea flower tea, I liked the green tea the most. It has a fragrance like newly cooked rice.

We left the tea garden full of an impressive experience. We hope that we will return to the site the next time we visit Chiang Mai and try its deep-fried tea leaves with spicy sauce and other organic Thai food. 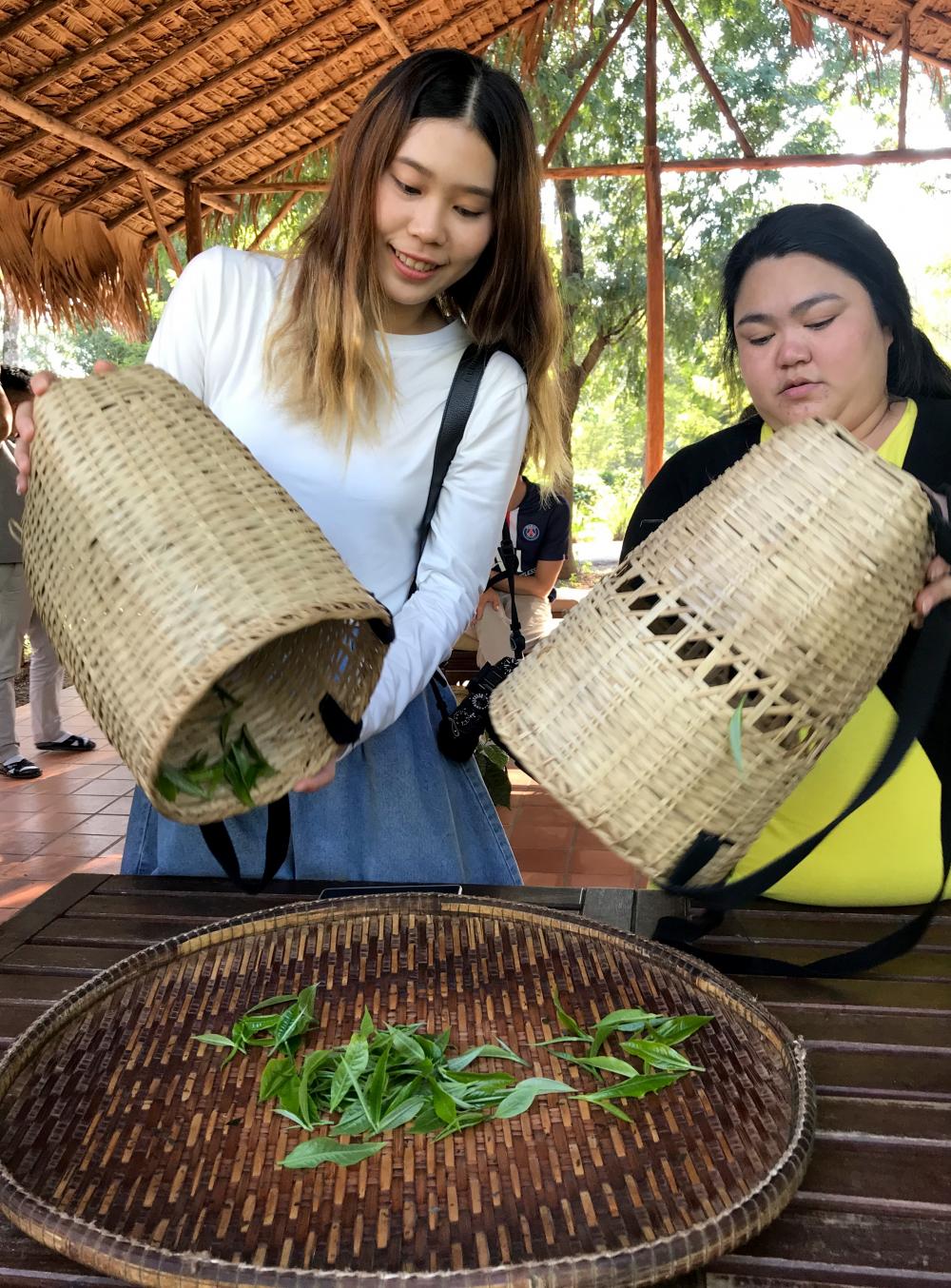 The tea garden tour programme will allow tourists to harvest tea leaves and roast them in a traditional way. 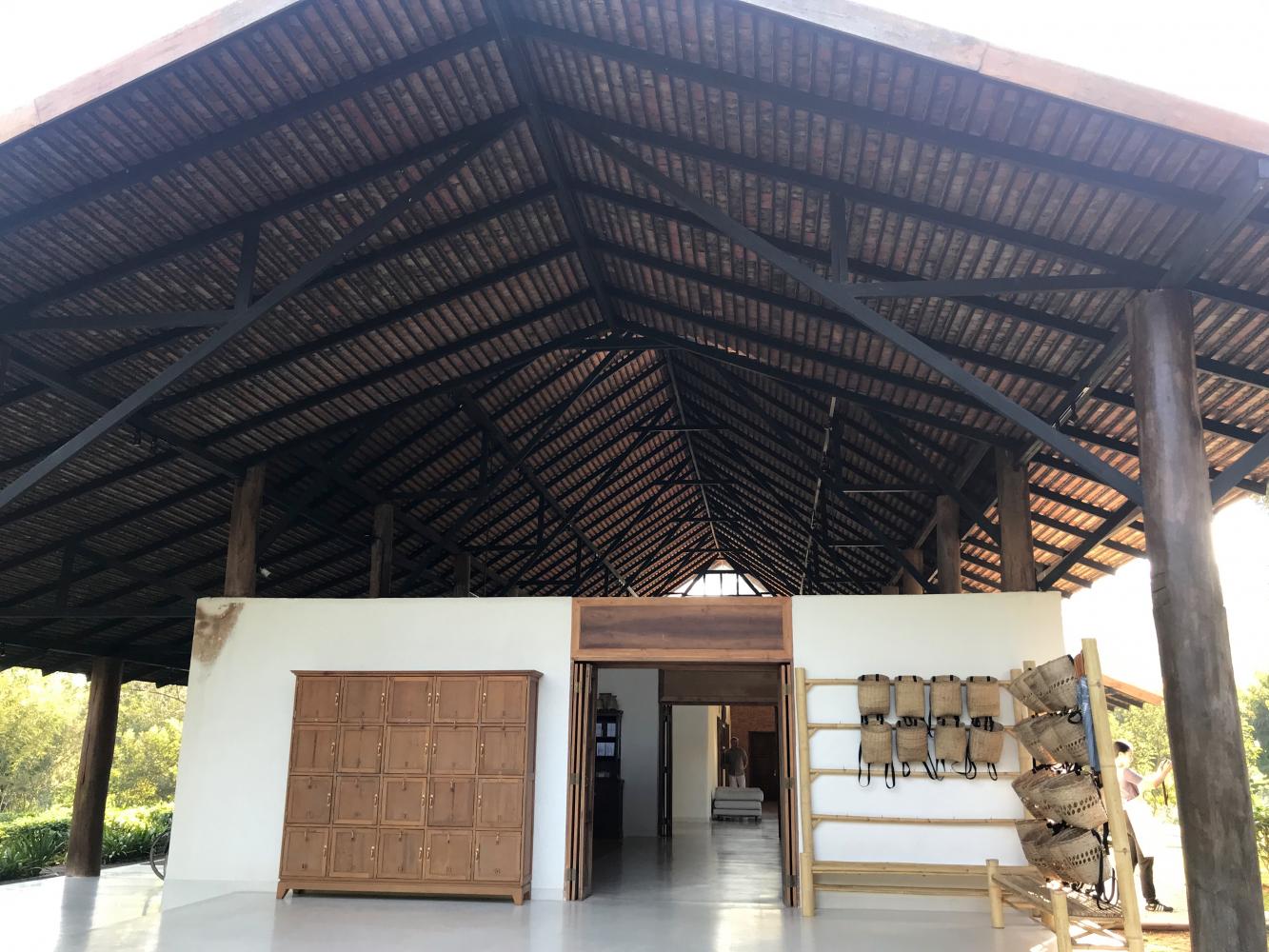 A high-roofed building at the Araksa Tea Garden houses tea rooms, a restaurant and gift shop. Thanks to its architecture, it is not hot during daytime. Air-conditioners are not needed. It also has lockers for visitors to leave their bags. Bamboo baskets are in place for visitors to take and use for harvesting tea leaves. 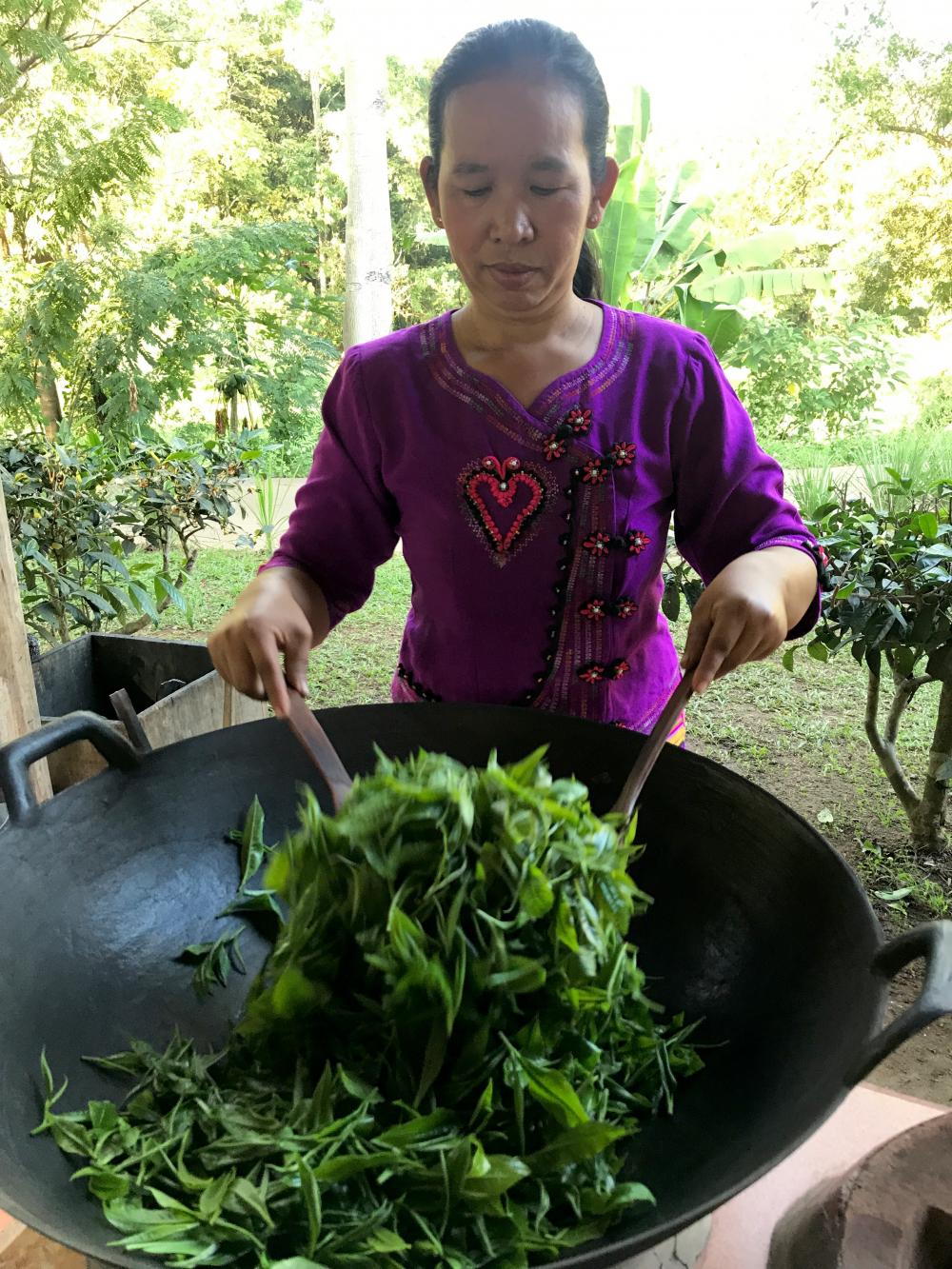 A tea picker demonstrates how to roast tea leaves in a traditional way. 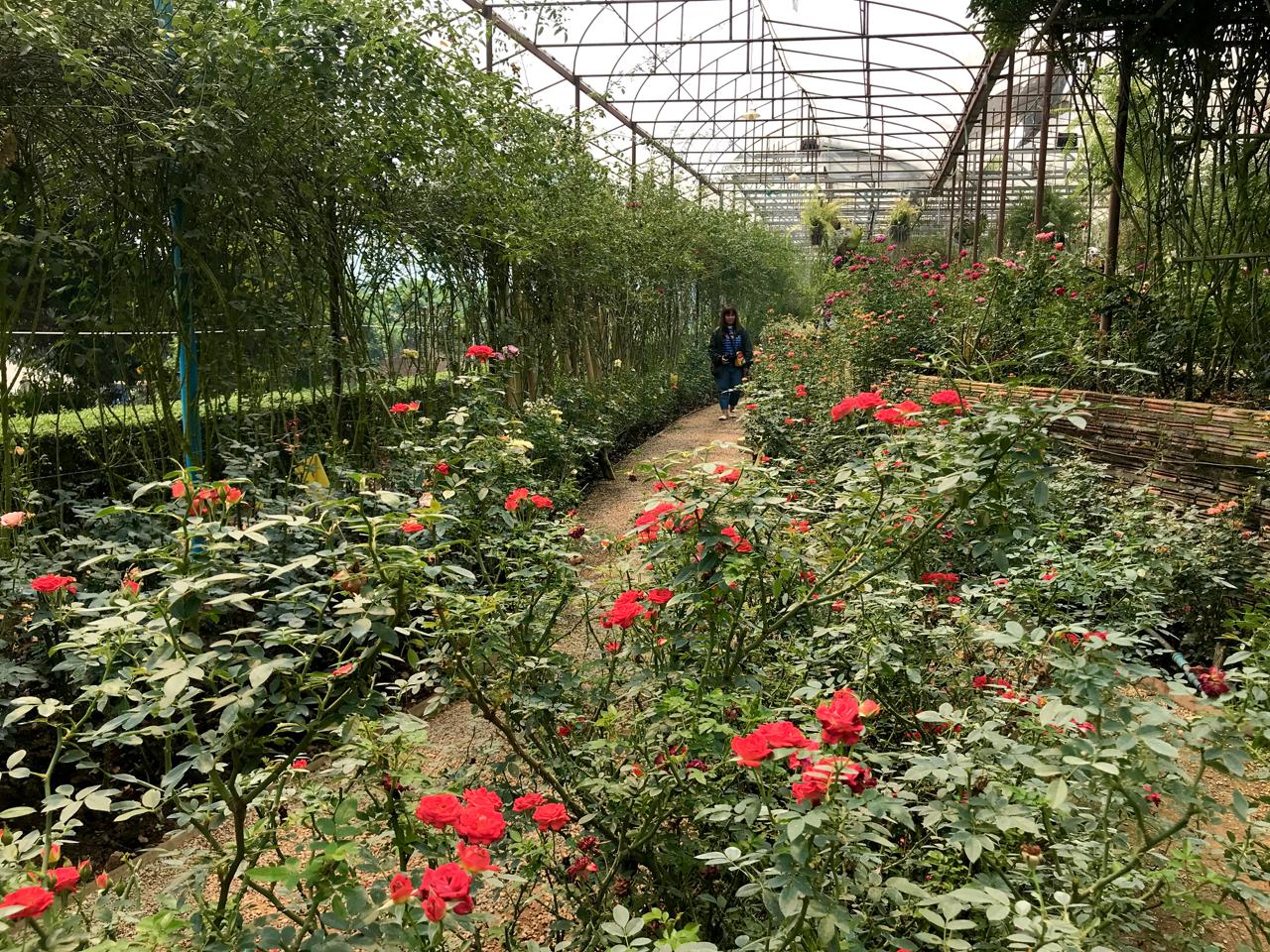 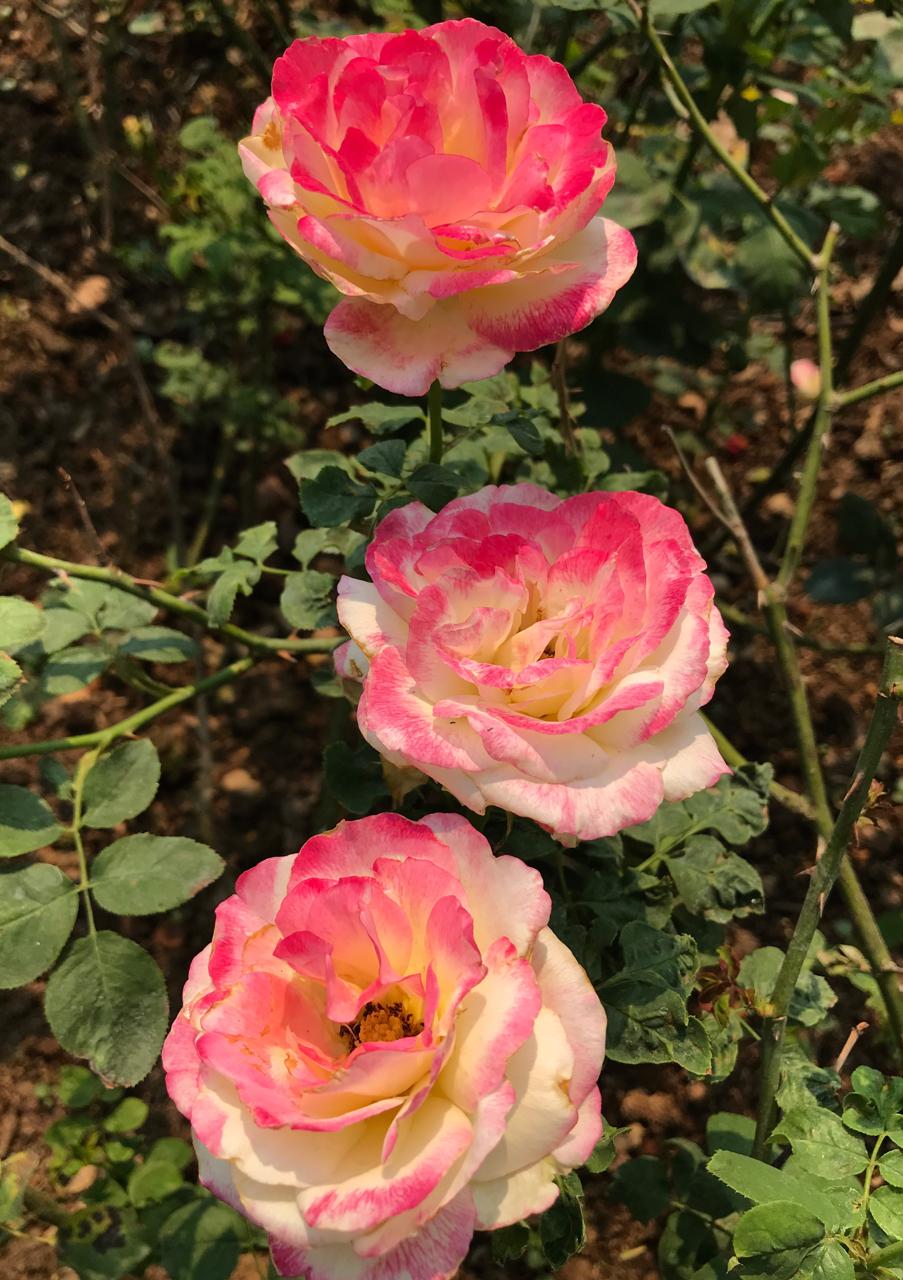 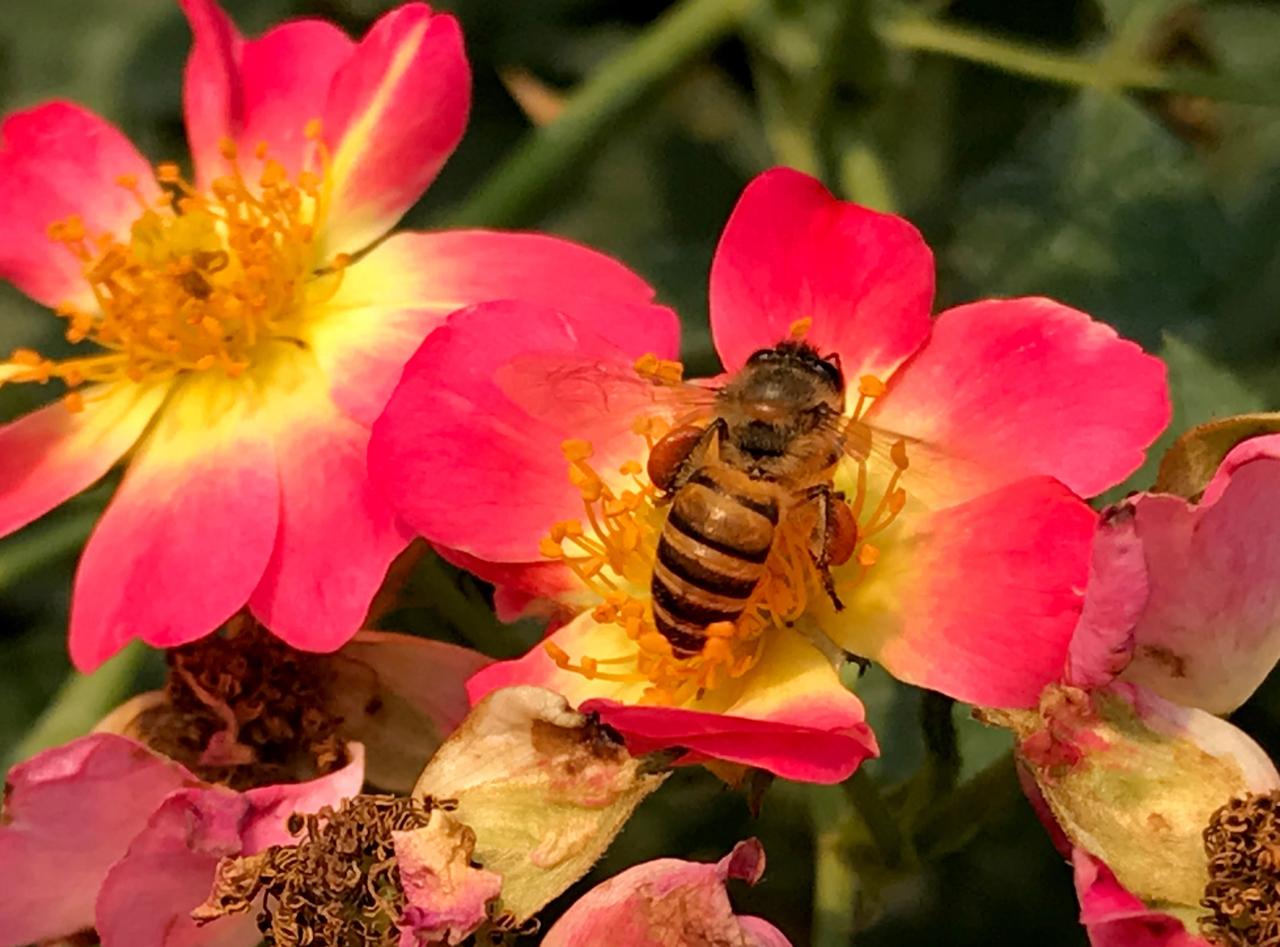 While in Chiang Mai, we also visited Huai Phak Phai Royal Rose Garden in Hang Dong District. Roses were in full bloom in the 20 rai plot of land. It is home to 187 varieties of rose. Red, white, pink, yellow and orange. They take turns in blooming so the garden is beautiful all year round. The most attractive period perhaps is during the cool season, from December to February. The royal rose garden is part of the Thung Roeng Royal Project Development Centre. It was founded in 1978 by His Majesty King Bhumibol Adulyadej the Great to educate local farmers about sustainable farming and new highland crops. The centre promotes Food Safety standards like Good Agricultural Practices (GAP) and Thailand Organic Standard. 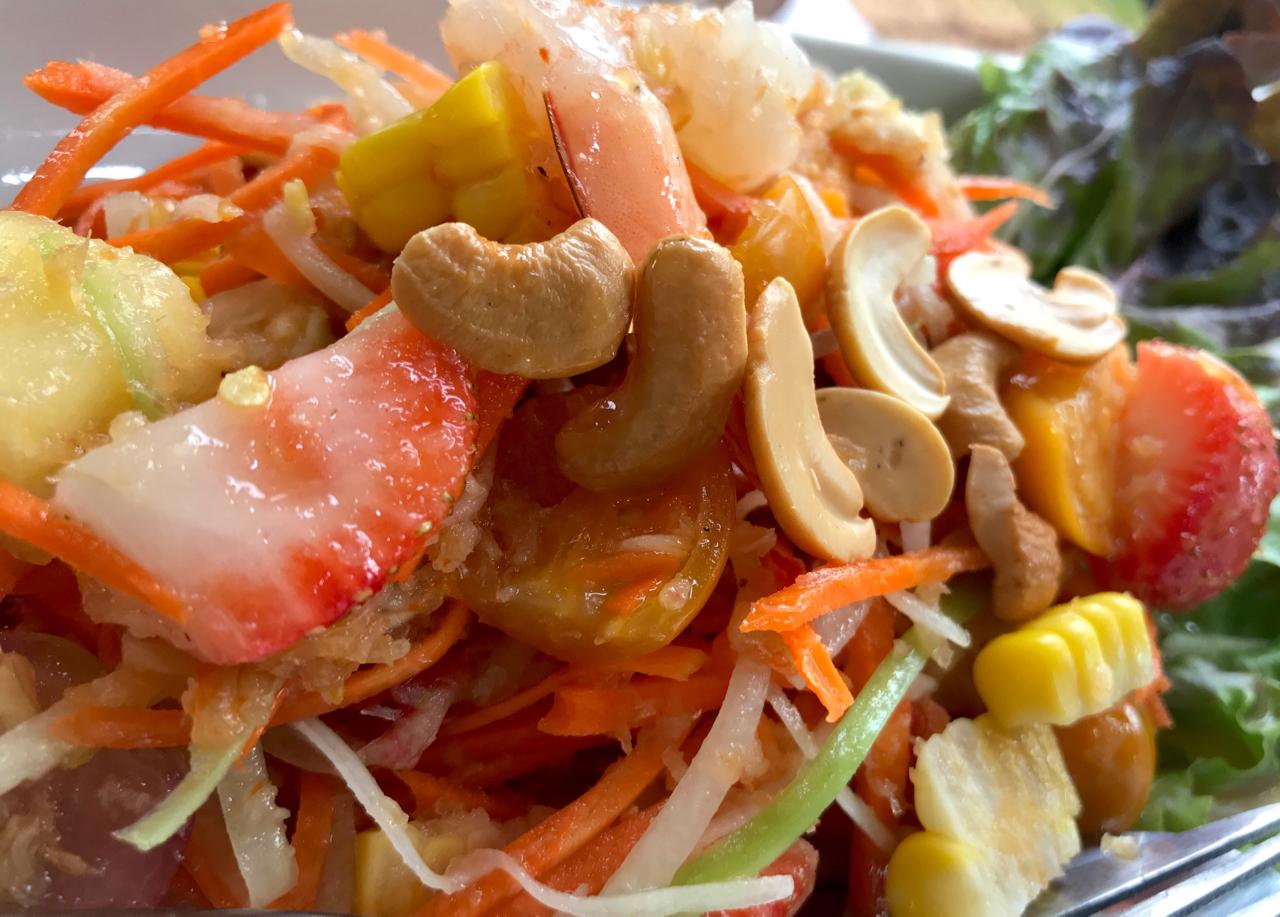 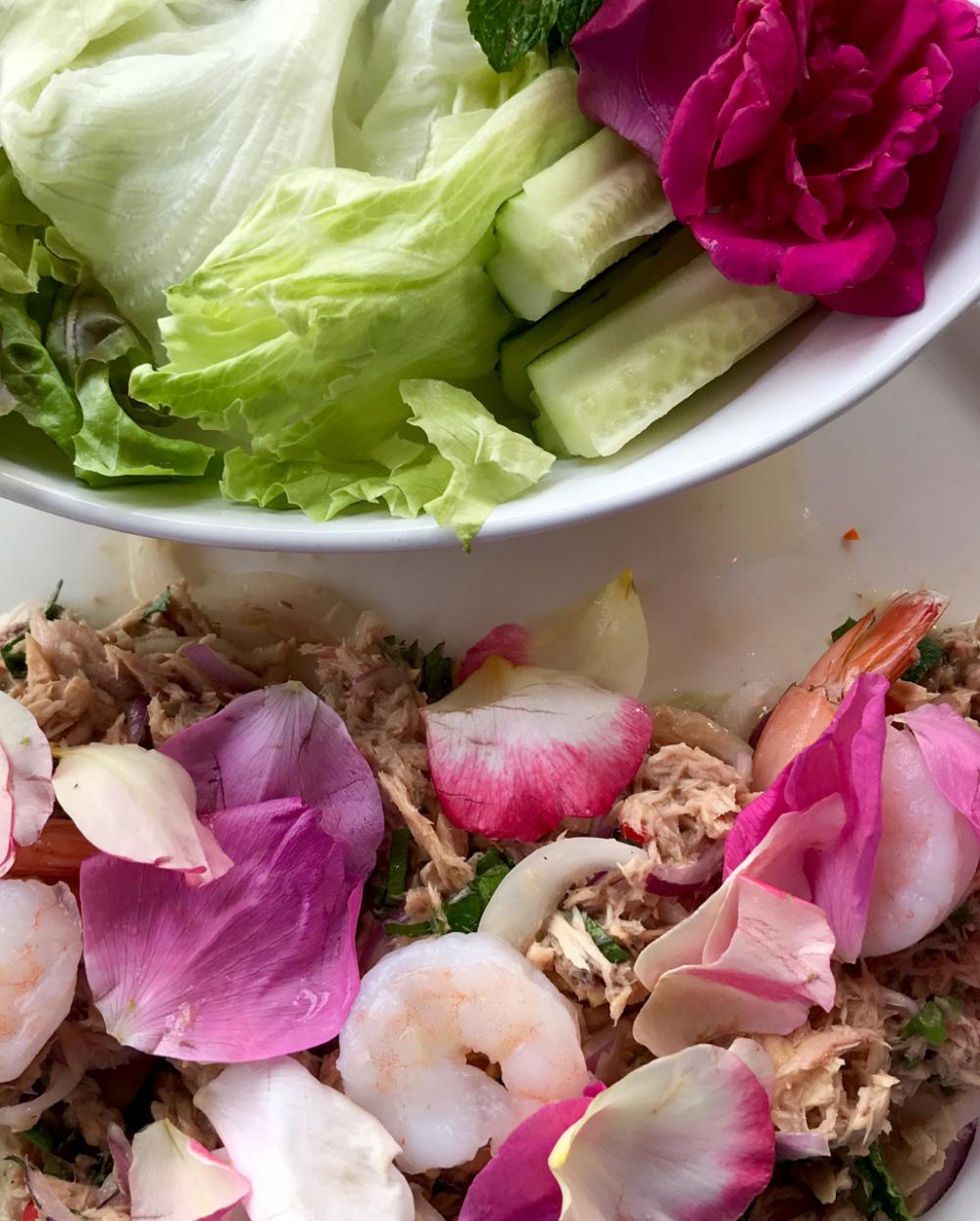 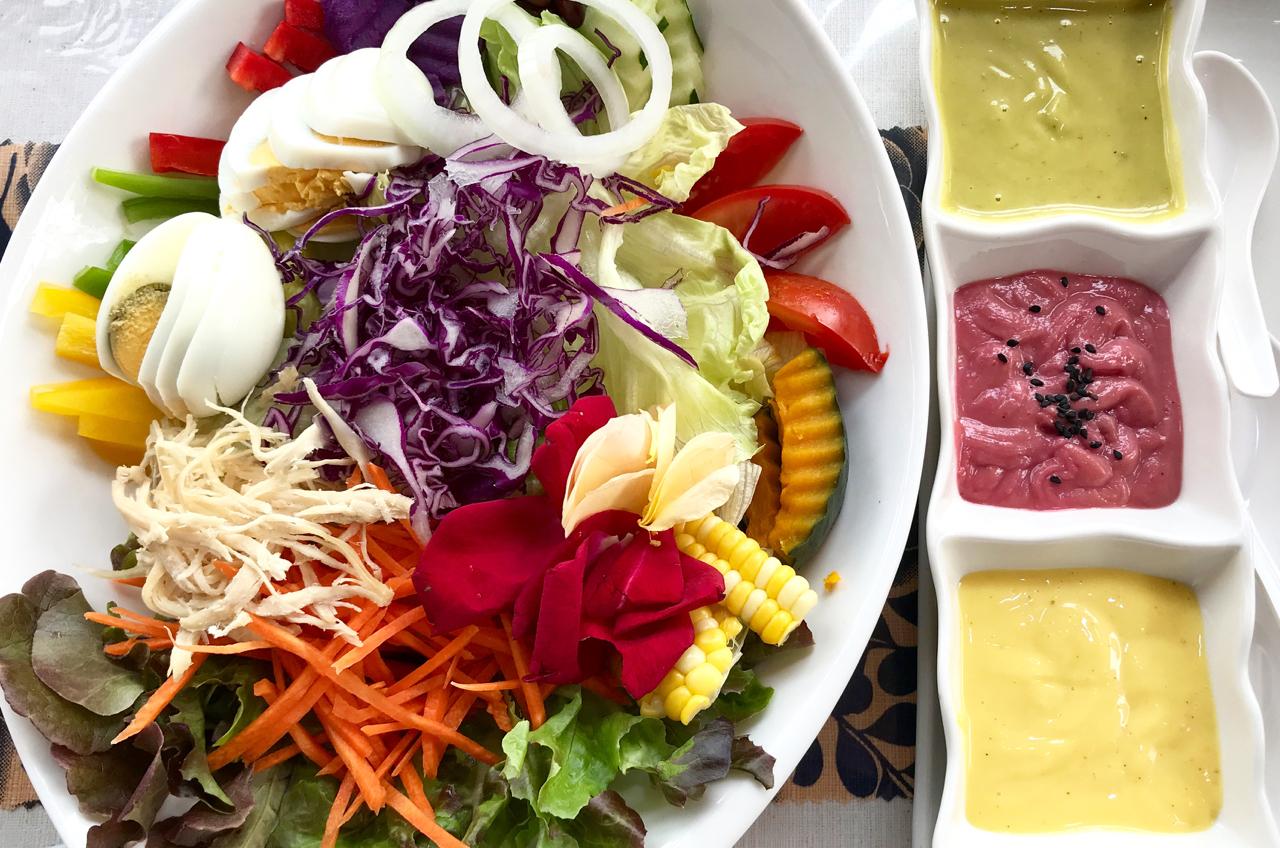 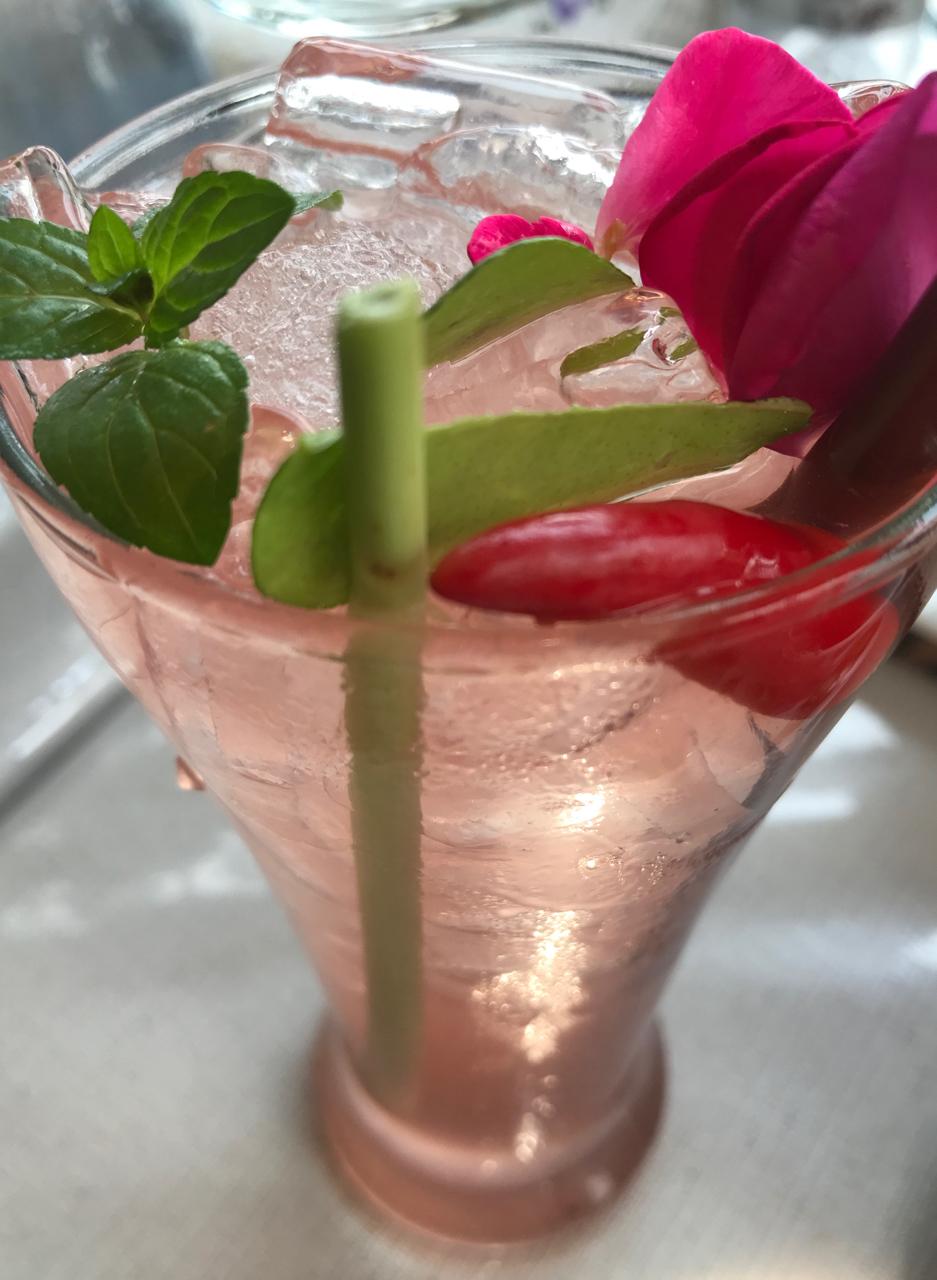 Roses are grown organically in the Royal Rose Garden so its restaurant serves mouth-watering food and drinks that have rose petals like salad, som tam and larb tuna (spicy tuna salad). The restaurant also has an outlet to sell farm produce and herbal products from the project as well as handmade items from local communities. The recommended one is rose tea bags because it is hard to find organic rose tea. The sweet fragrance is also strong. 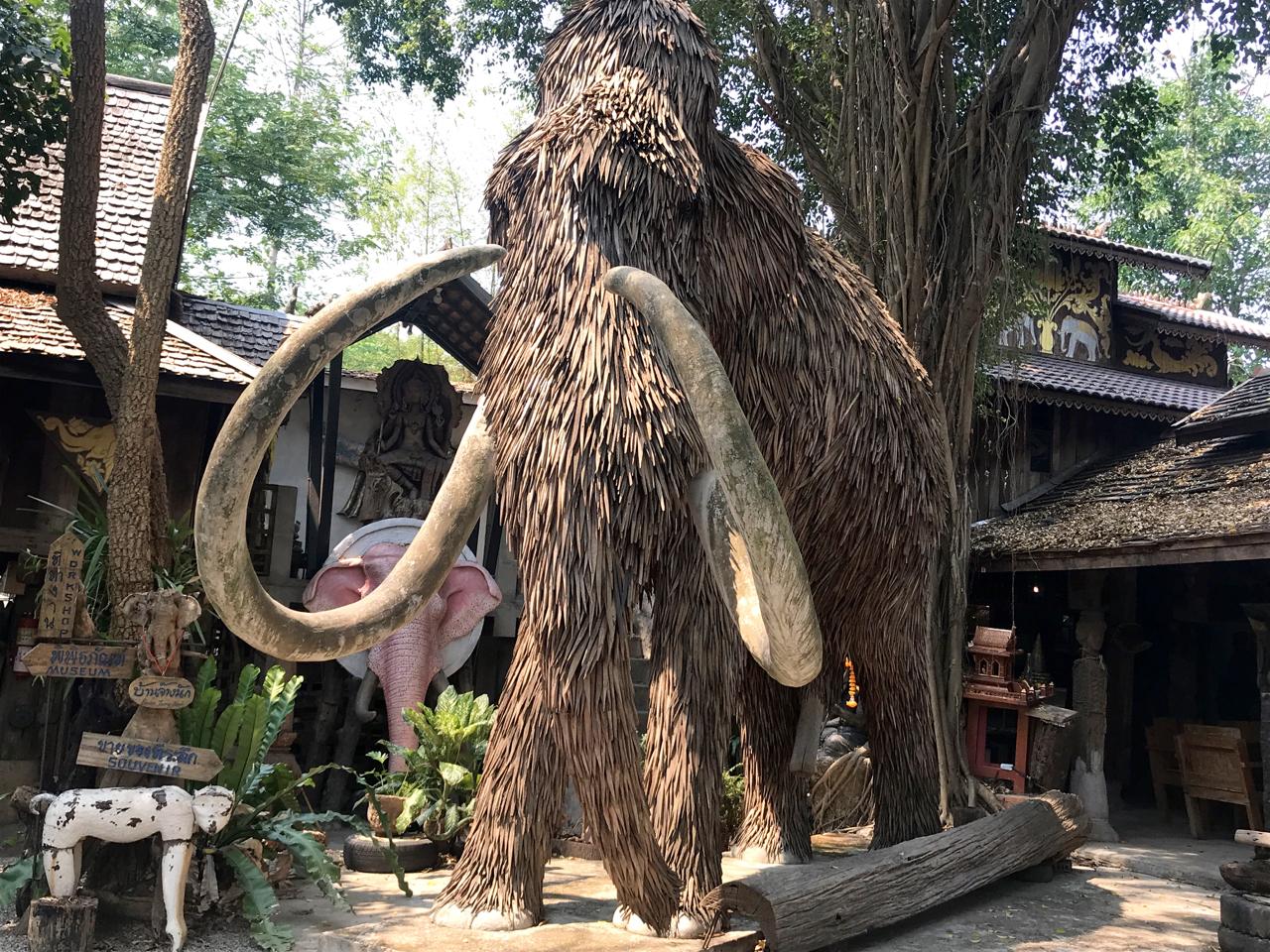 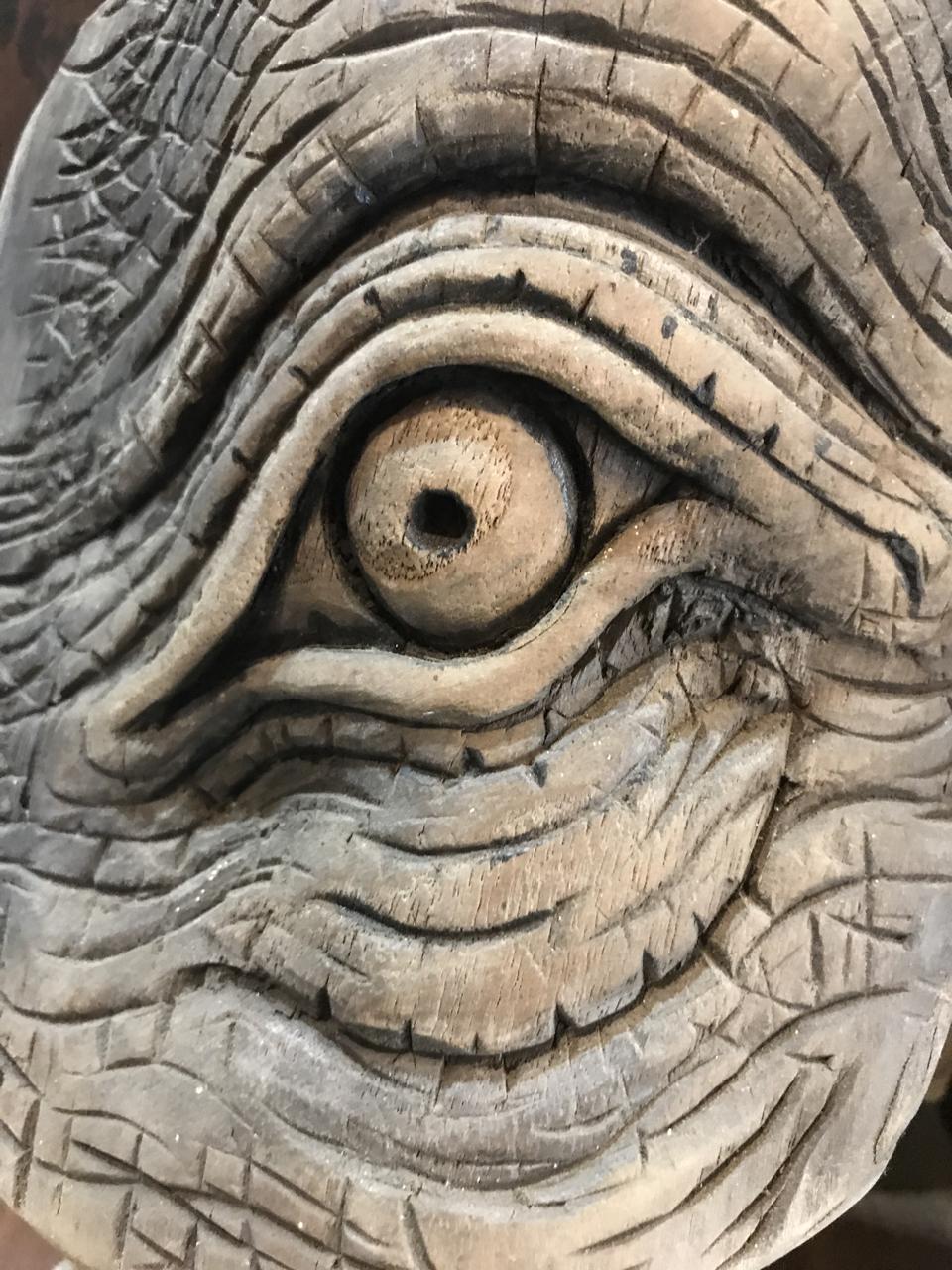 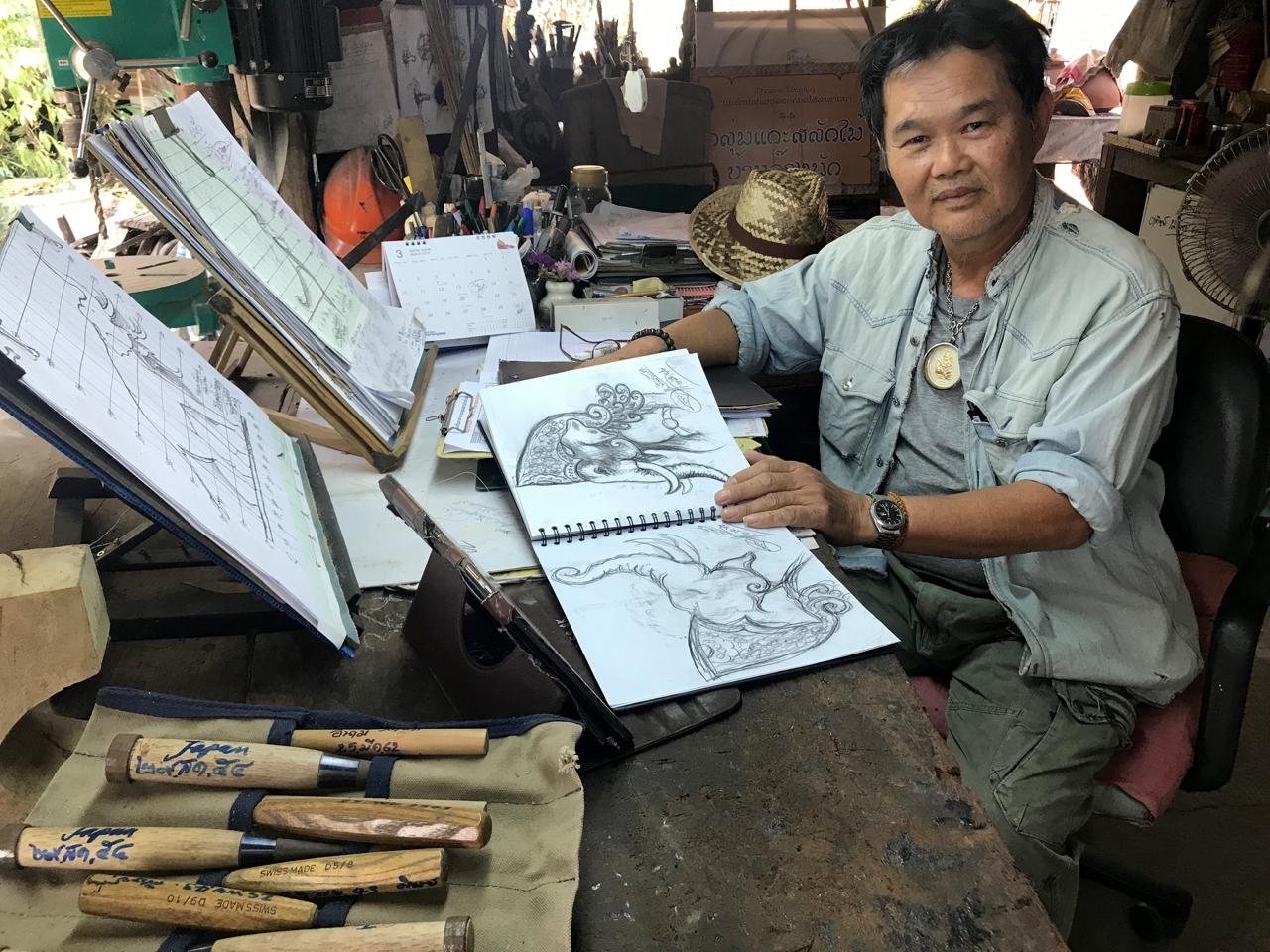 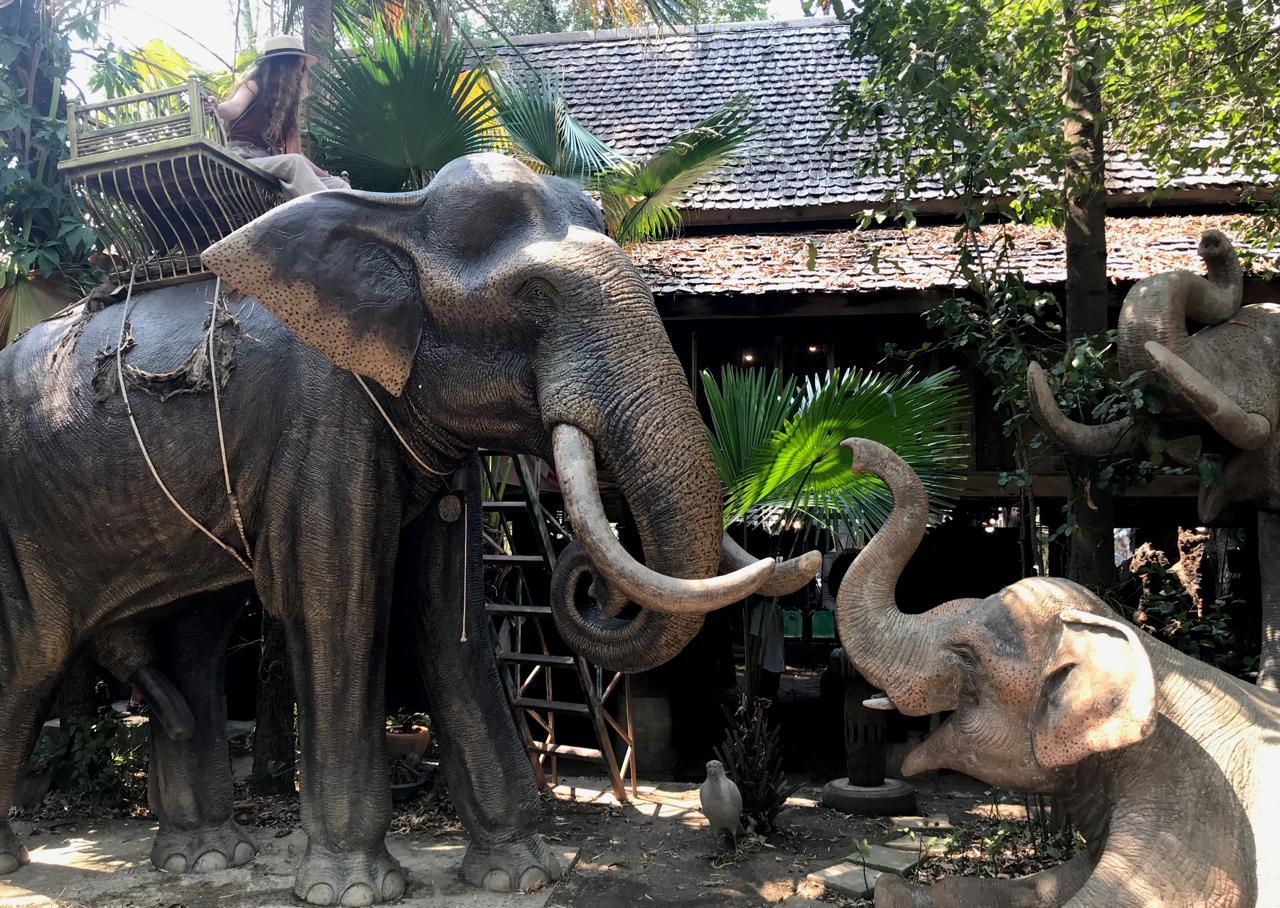 The large sculpture of a mammoth stands handsomely in the front yard of Baan Jang Nak, a wood carving centre in San Kamphaeng district. The sculpture is the work of Phet Viriya, a veteran Lanna artist. He carved his first elephant almost 50 years ago. His work is unique because he can make the animals look real which includes posture, wrinkles of skin and the eyes. He opens his house as a workplace for craftsmen, a learning centre for those who want to know how to carve wooden elephants as well as a museum where he displays his own works and collections in three exhibition rooms. Baan Jang Nak is open for a public visit without an entrance fee. 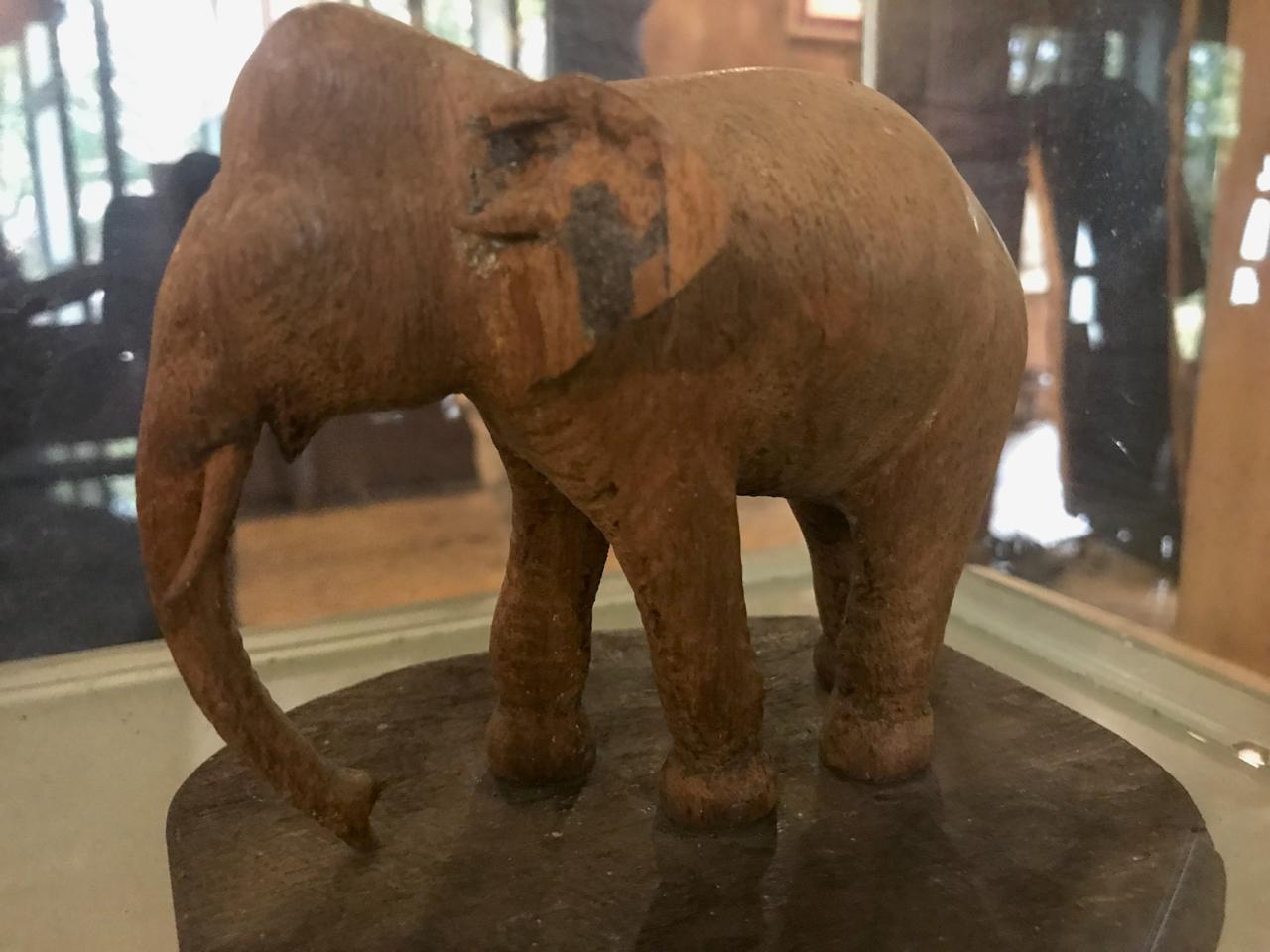 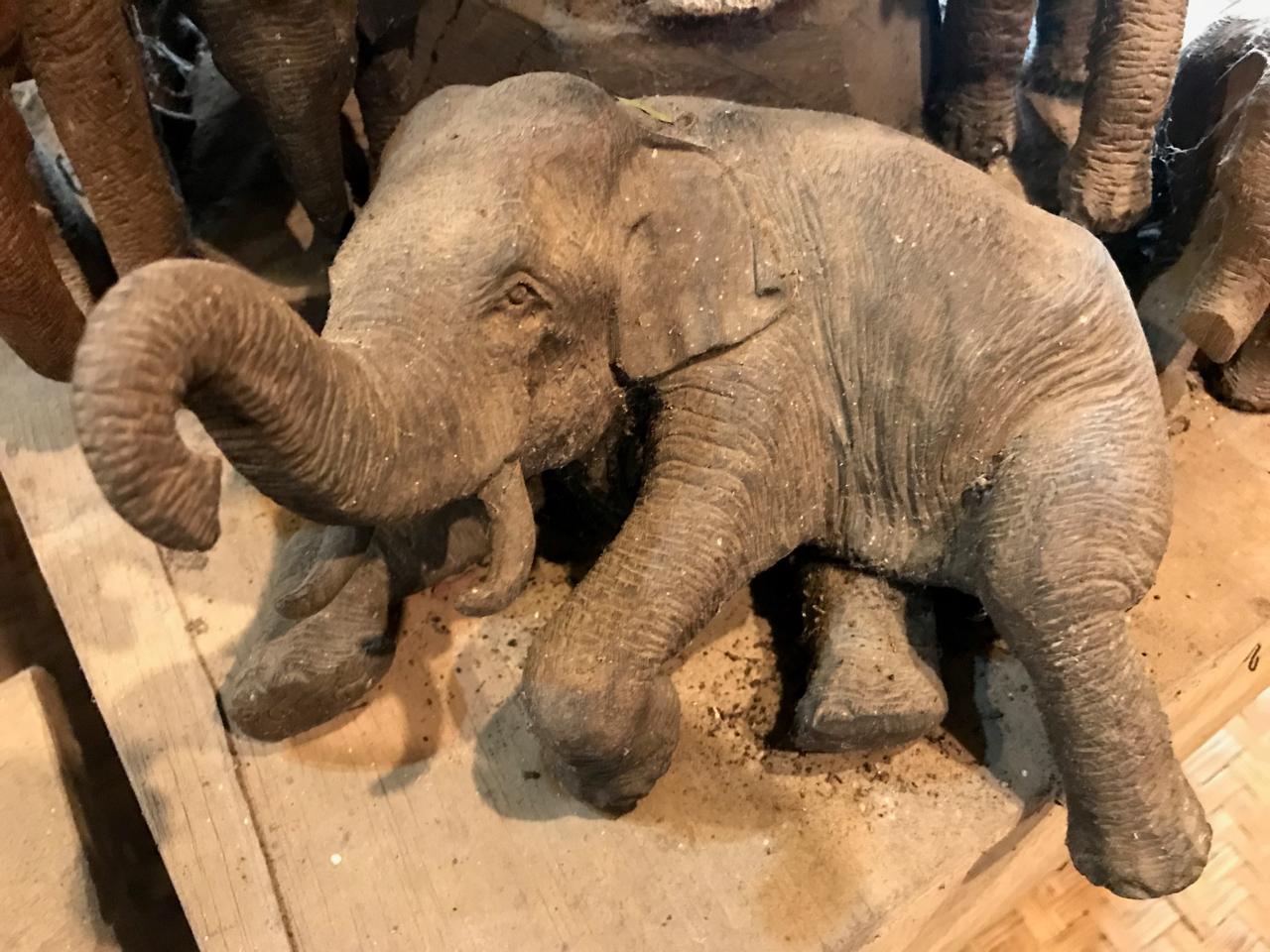 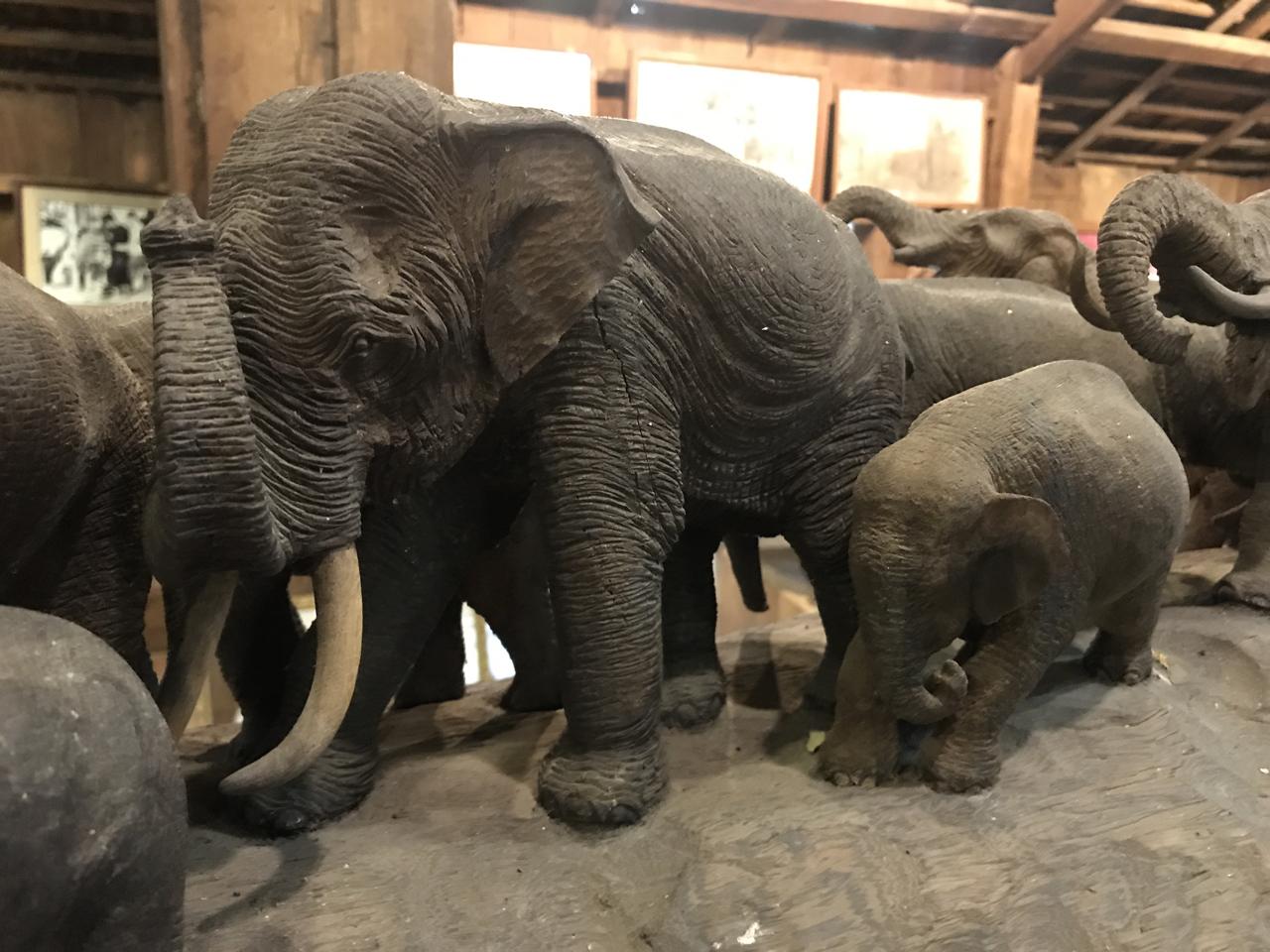 Phet Viriya keeps his first carved elephant in his raised-floor northern-style house which was turned into the museum at Baan Jang Nak. The wooden sculpture looks very much different from his later works. The first version is a standing sculpture. Its skin didn't have the wrinkle pattern and didn't have eyes. Many fans of his work offered a handsome price to buy his first sculpture but he always refused their offers. He gave a reason that makes those who hear it laugh: "It is ugly and I can't recreate that any more." 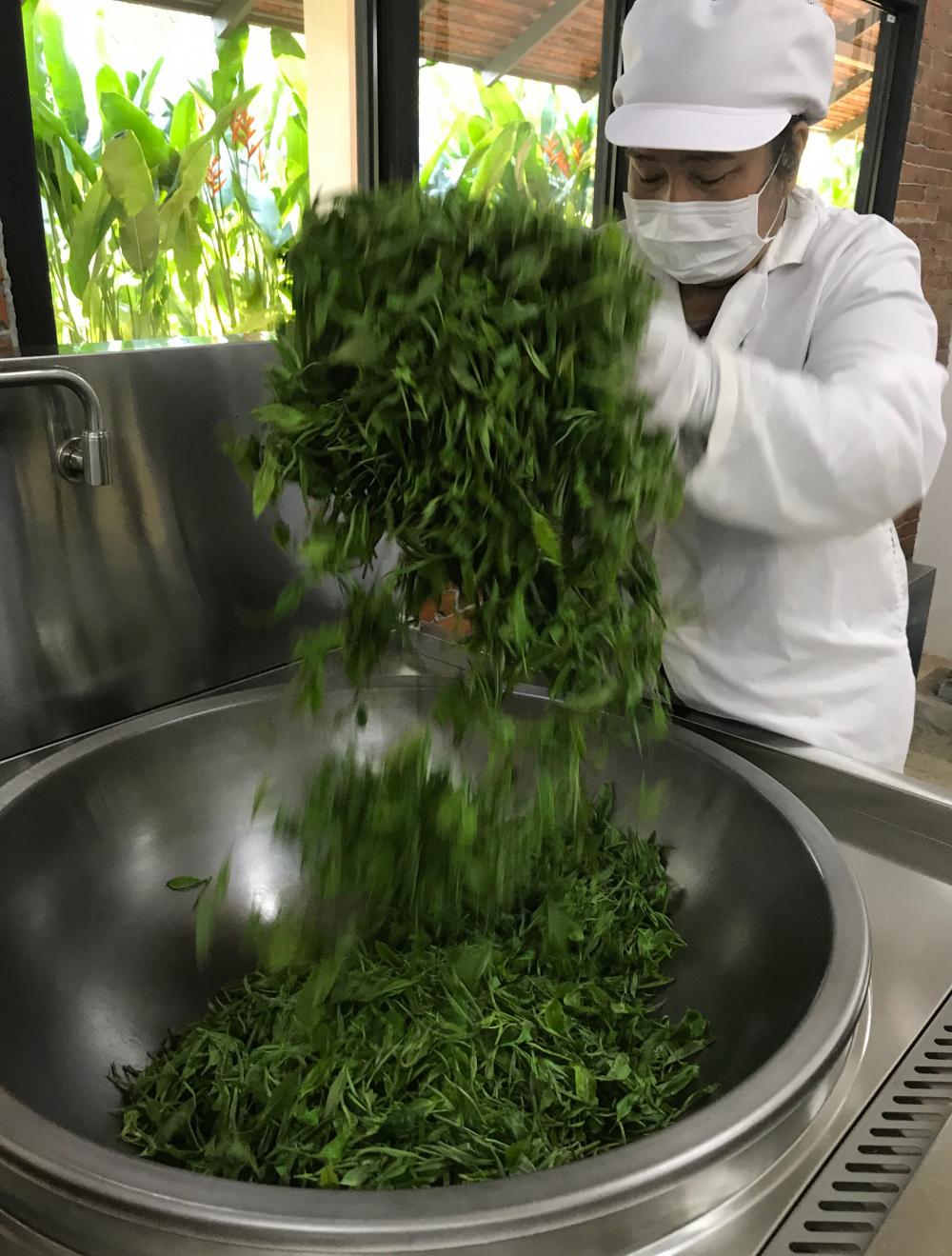 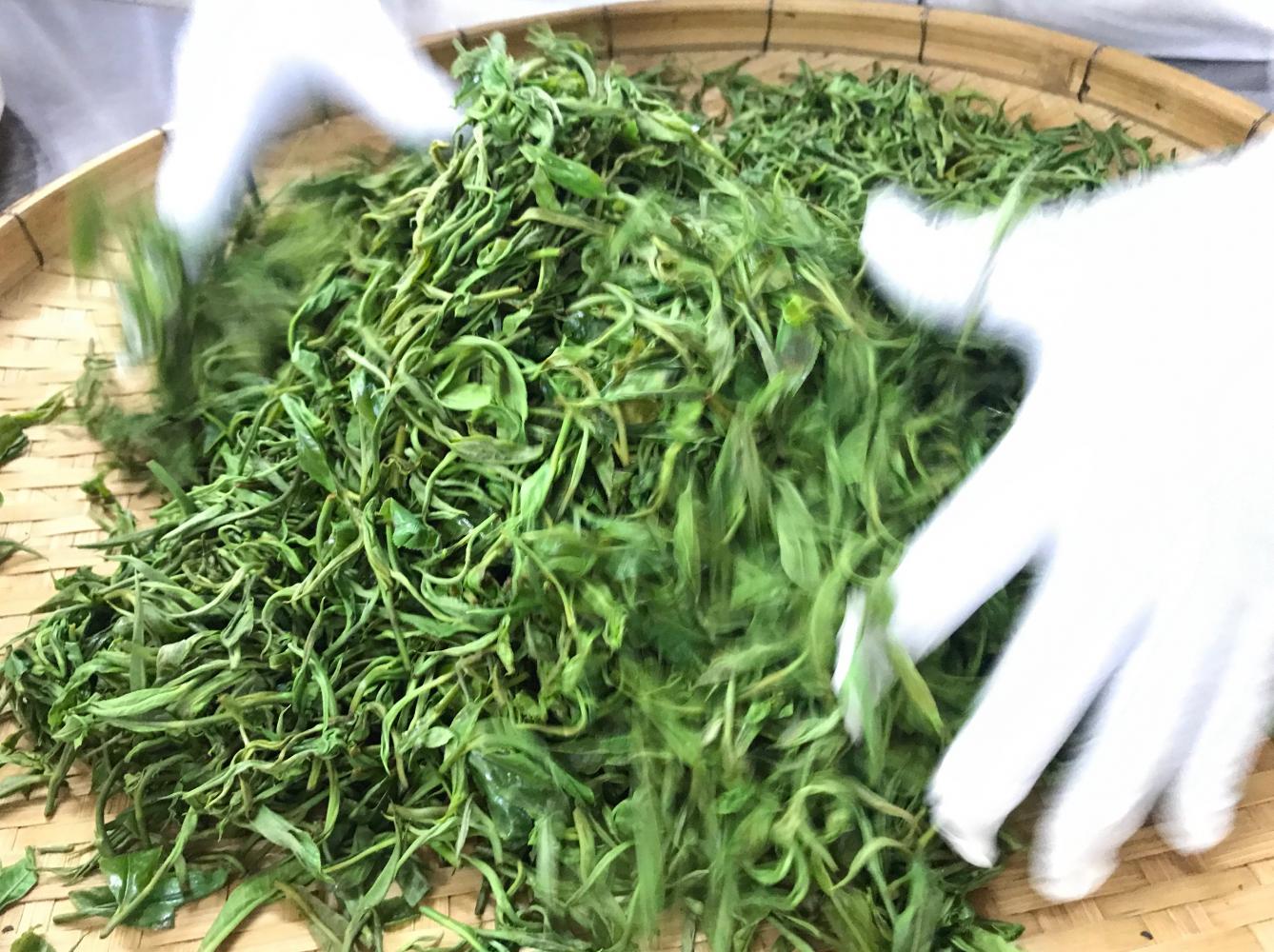 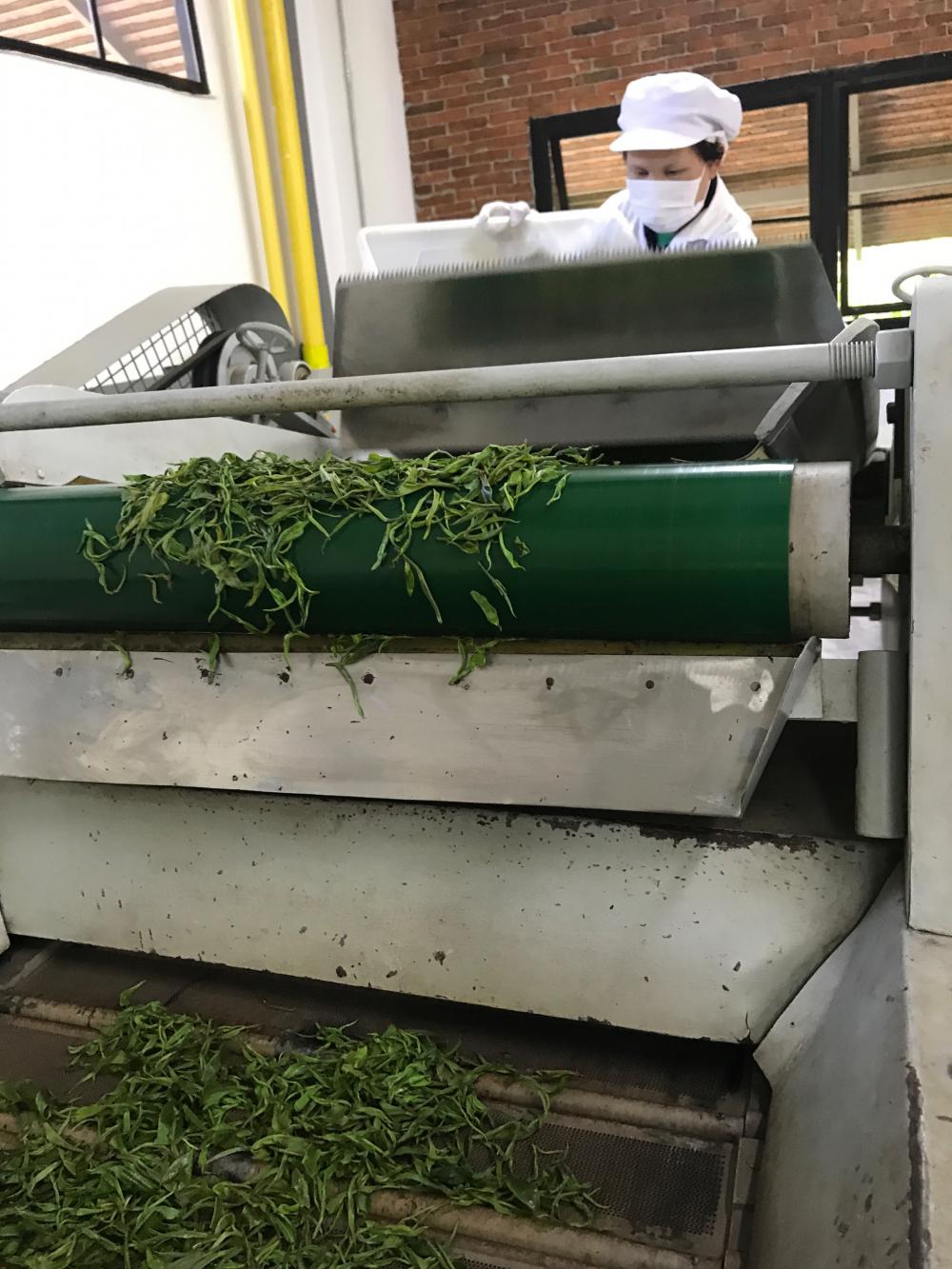 We had a chance to have a tour inside the tea processing plant at Araksa. We donned a long-sleeved lab coat, hair net, surgical mask, a pair of gloves and disposable shoe covers before being allowed to enter the plant. A pair of staff members were roasting freshly harvested leaves while we visited. To make green tea, the leaves are roasted by hand for five minutes, then rolled over also by hand for three minutes before being sent to the last process which is to make them dry. The drying process over a machine takes about 20 minutes. The nice smell of green tea fills in the air. The tea is ready to serve. 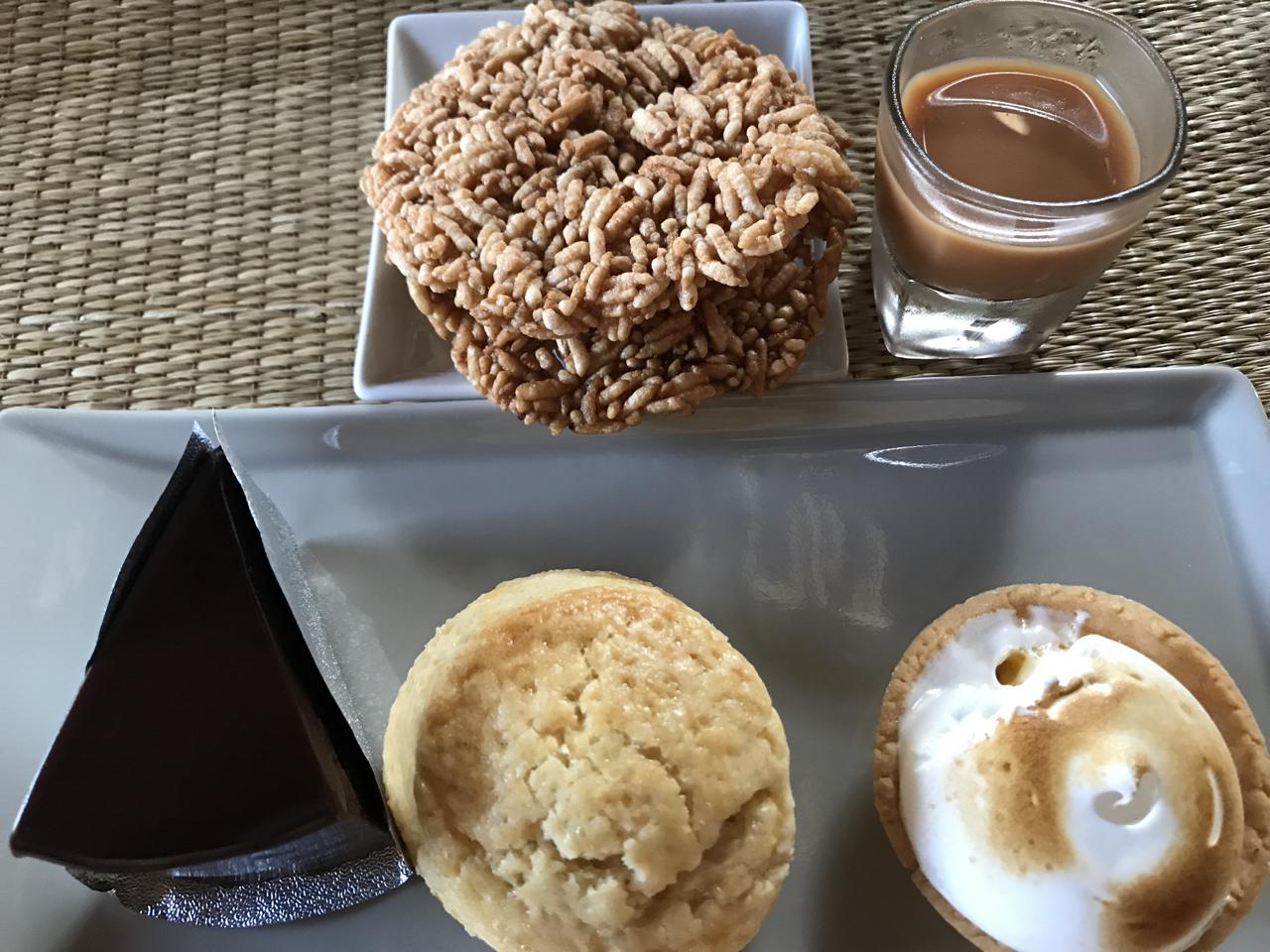 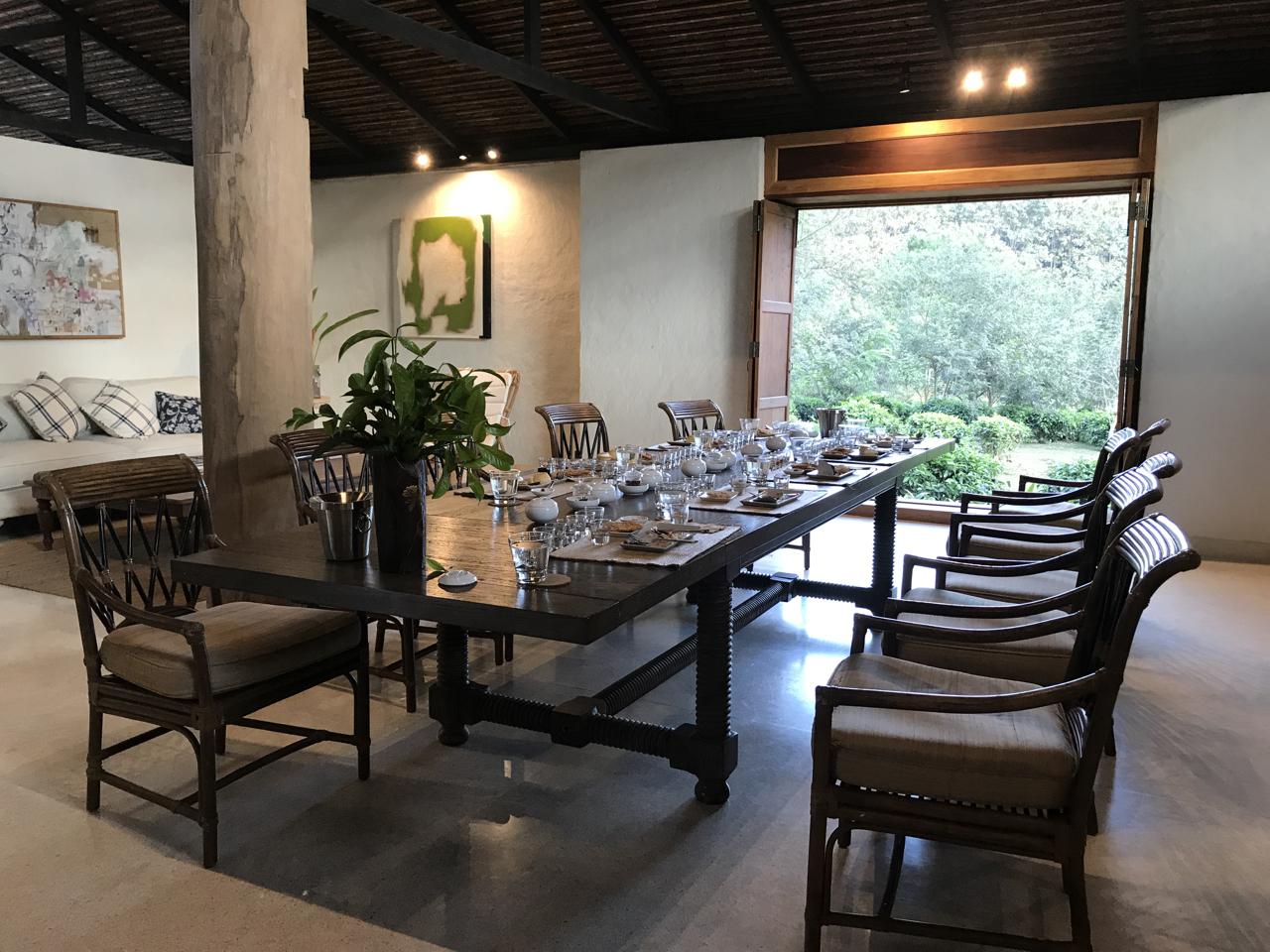 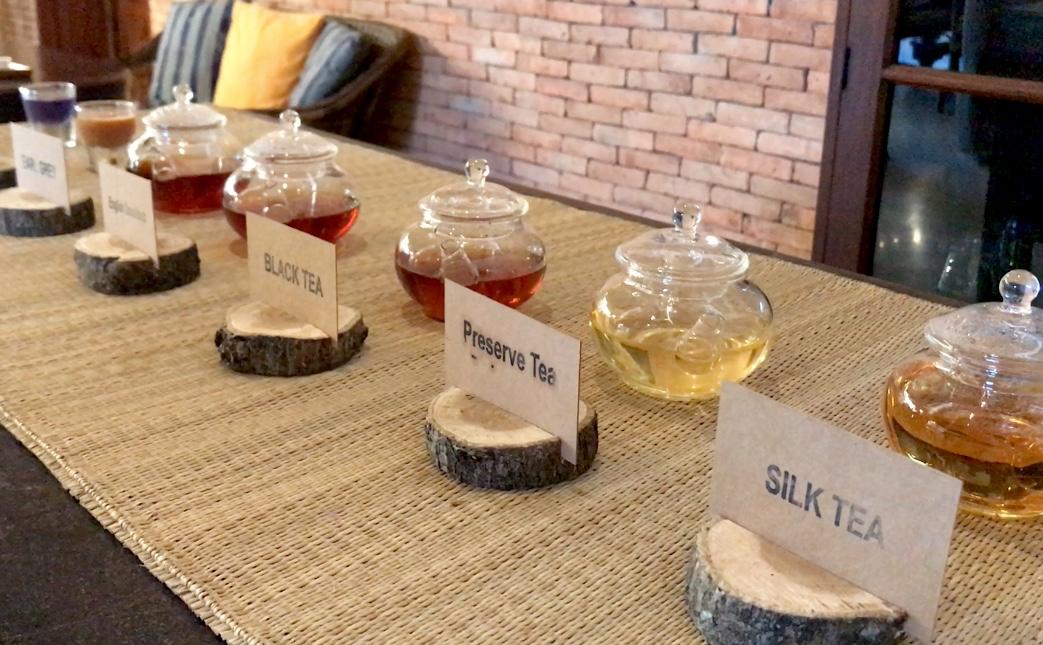 The tea tasting and dessert pairing workshop was an activity I liked at Araksa Tea Garden. In the two-hour course, we learned the concept of its organic tea business and also tasted nine types of tea including two kinds of white tea, green tea, earl grey, black teas, Thai-milk tea and butterfly-pea flower tea. 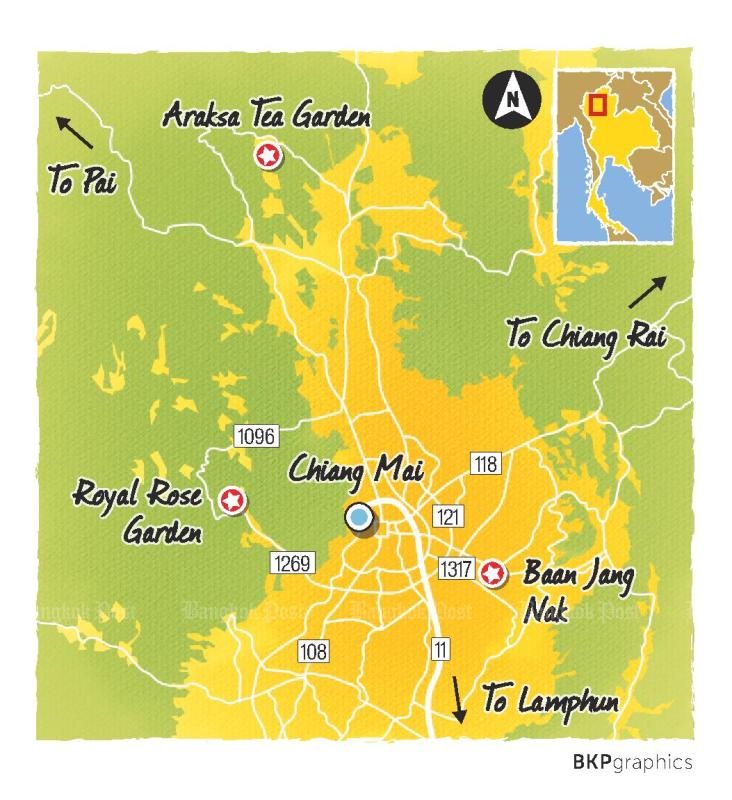