Summoning the past
Life
Arts & Entertainment

When he was young, Therdsak Yenjura always walked a hiking trail from the foothills of Doi Suthep to visit Wat Phrathat Doi Suthep. The route, which took him a couple of hours, passed Wat Pha Lat, a forest monastery located about halfway to the destination. He sometimes made a stop to pay respect to old Buddha images housed in a ruined concrete structure of the temple. 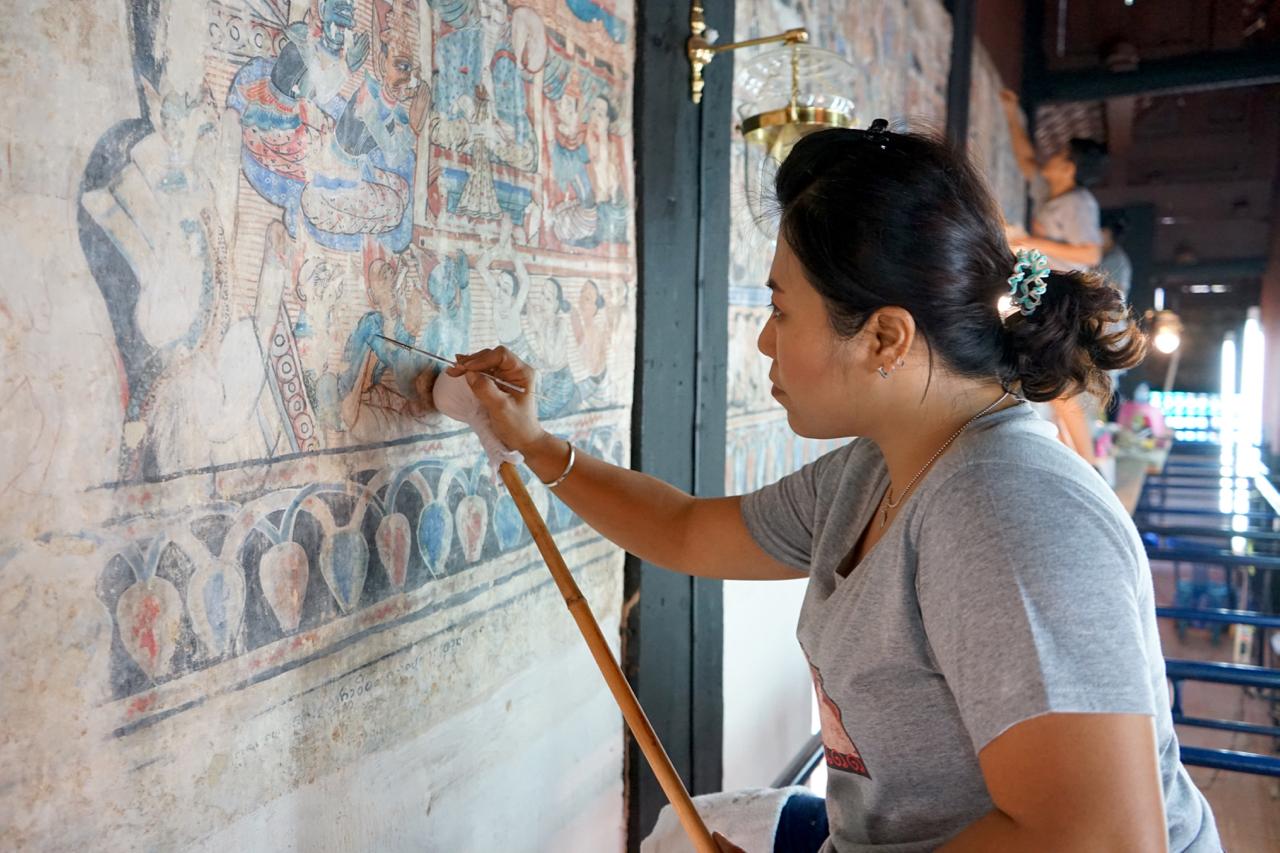 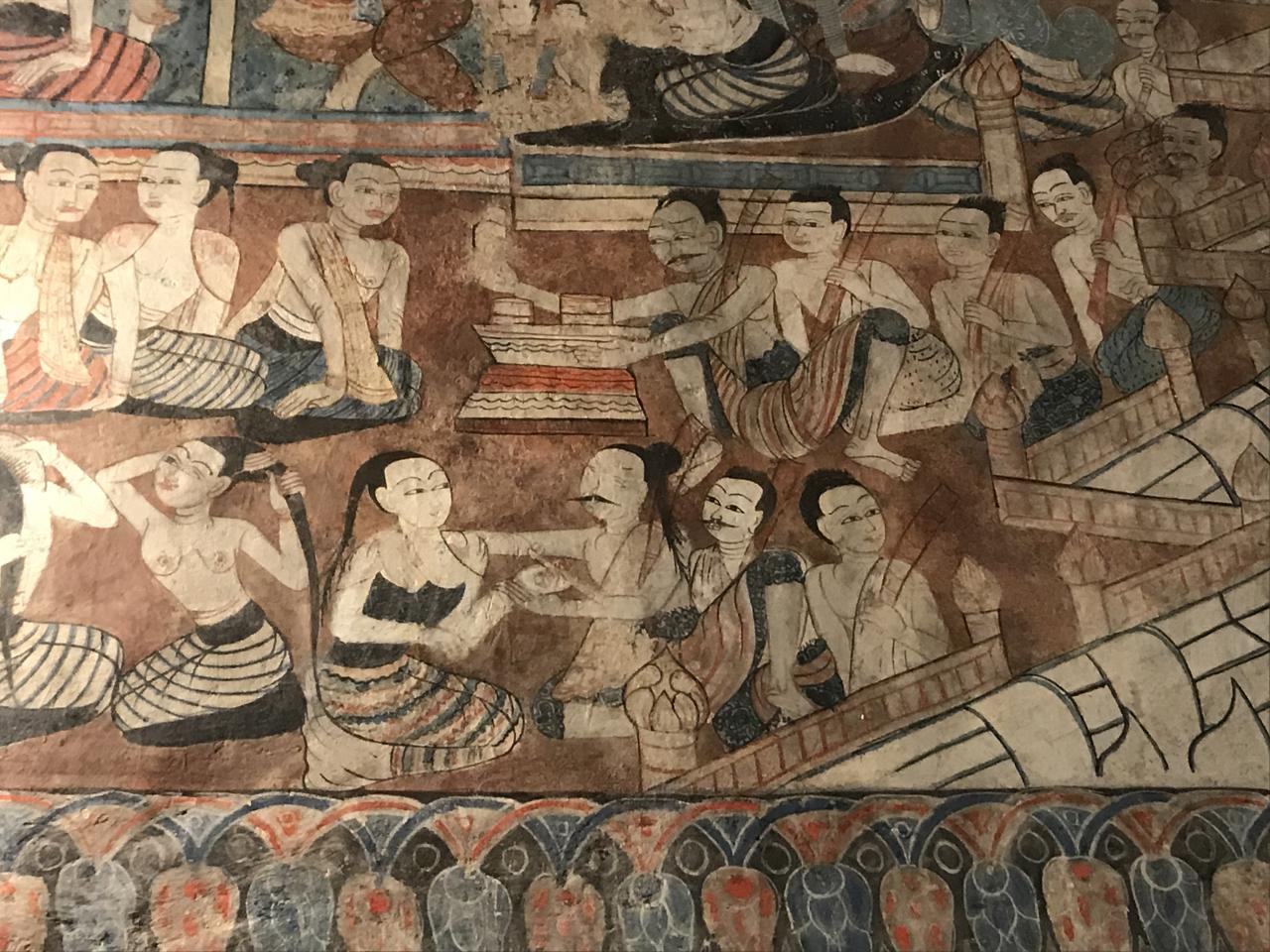 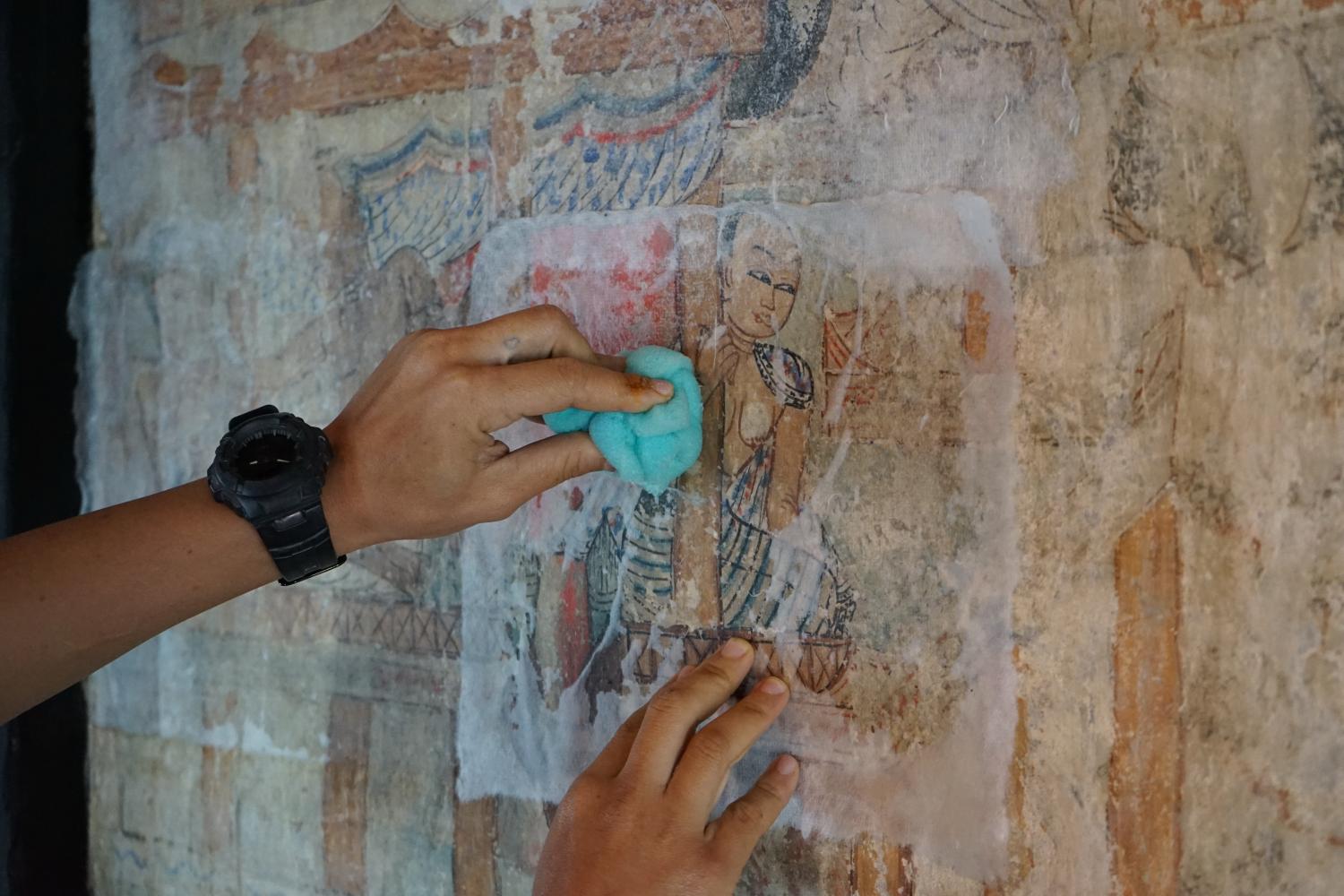 Korn-uma Nutasarin and her team finished restoring the murals inside the vihara (prayer hall) of Wat Pa Daed in Mae Chaem district last year. The process needed dedicated work to gradually remove dirt from the surface. They used sa paper to cover the paintings and gently applied distilled water. They added a little bit of ammonium carbonate to distilled water when the stains were too deep. A sponge was used to remove liquid. The team used watercolours for repainting faded murals and did not touch the parts where paint had disappeared. (Photos courtesy of Fine Arts Department)

"I always wondered what the building was like before it was damaged," he recalled. The remains were only the base and seated Buddha images. When he became a leader of the historical-site-preservation unit of the Fine Arts Department's Chiang Mai office, he initiated a project to preserve the historical site in his hometown. A few years ago, his team worked with the Lanna Architect Group and Wat Pha Lat to start the renovation project.

"There is no evidence to indicate when Wat Pha Lat was built and why there is a structure located next to a stream. What we found was only a picture from a visit by Prince Damrong Rajanubhap during the reign of King Rama V," he said. Fortunately, the photo had all the details of the structure though it was almost destroyed by time and earthquakes.

Based on the photo, the team outlined details and drafted the structural blueprint. The old hall was built in colonial architecture. It was believed to be constructed by Burmese people who worked for a British logging company in Chiang Mai.

"We believe the structure was built either as a prayer hall or for meditation," he said. The building is known today as Hor Phrachao Rim Nam, meaning a hall of Buddha located next to a stream.

The restoration was completed last year. When finished, the white building looks different from other facilities at the temple. It has a rectangular shape, four windows and one door. Each window and the door have an arch shape. Stucco art of a peafowl fanning out its feathers decorates on the top of each pillar. The hall also has stucco art of a king aiming an arrow at a mythical lion, or singh, on both the left and right sides of the door.

After the big renovation, the hall is safe for tourists to enter and pay respect to the Buddha images inside.

Recently, the Fine Arts Department's Chiang Mai Office completed several restoration projects in the province. Another notable one is the restoration of murals of Wat Pa Daed in Mae Chaem district.

The project was initiated by Her Royal Highness Princess Siribhachudabhorn in 2016 when the princess visited the temple. The restoration work took about 18 months, including repairing wall cracks and repainting the murals, said Korn-uma Nutasarin, a senior academic artist at the Fine Arts Department, who led the restoration team.

The temple was built during the period of King Rama V by the ruler of Nakhon Muang Chaem, or Mae Chaem as it's known today. The murals cover approximately a 120m² area of the upper part of the walls. The paintings were created in 1889 by Tai Yai artists. They recounted the life of Lord Buddha.

"It was fortunate that the damage was light. We found colours faded and blanched in parts. There was no peeling," she said. The renovation project was completed last year.

Another ongoing project is the discovery of a group of ancient human skeletal remains in San Pa Tong district. The excavation started in 2013 and finished last year, when all 35 ancient human skeletons and one horse skeleton were discovered in a 3x7m pit in Wat Tha Kan.

"We once had a plan to keep the excavation site as it was and open it for public visits, but later we decided to remove all the skeletal remains because of the soil condition. It is too soft to exhibit the skeleton in an open pit," said Nongchanai Tarugsa, an archaeologist of the Fine Arts Department's Chiang Mai office.

The skeletal remains have been kept in her office with a plan to exhibit them in the future. The short-term plan for the team is to test the DNA of those ancient people. The team hopes to know who they were and if they are related to people in the present day.

The test needs funds from the government, as well as expertise and co-operation from an international laboratory that has a database of people living in prehistoric Southeast Asia.

"The DNA analysis of ancient humans is new for us. In Thailand, there was no such proof before, not even from the skeletons found in the archaeological site in Ban Chiang," said Phnombootra Chandrajoti, deputy director-general of the Fine Arts Department. Knowledge about the age of ancient people is normally estimated from artefacts found in the excavation site.

The latest archaeological site, unearthed last year, is an iron smelting furnace, dating back 2,300 years. The site is located in Li district in Lamphun, 165km south of Chiang Mai city.

"It is the oldest furnace found in the Kingdom," said Yoddanai Sukkasem, an archaeologist at the Fine Arts Department's Chiang Mai office.

The teams of archaeologists found about 40 sites for ancient iron-smelting furnaces in the Mae Lan community. Each site had three or four remains of bloomeries. However, the team didn't find iron tools nor iron axes, swords or knives. They assumed that the community produced iron for export.

The furnaces were made of clay and about 10-15cm thick. They were used for direct iron smelting that heated ore to 1,100-1,300C for a couple of days until the iron was extracted.

"We haven't found any ancient furnaces that look like the ones in Mae Lan. We also found a large number of furnaces and that can lead to the assumption that Mae Lan was one of the biggest sources of iron ore in prehistoric times," Yoddanai said.

The Fine Arts Department expects that the knowledge of history and the artefacts found in the archaeological sites can be further promoted to be tourist attractions in the future. 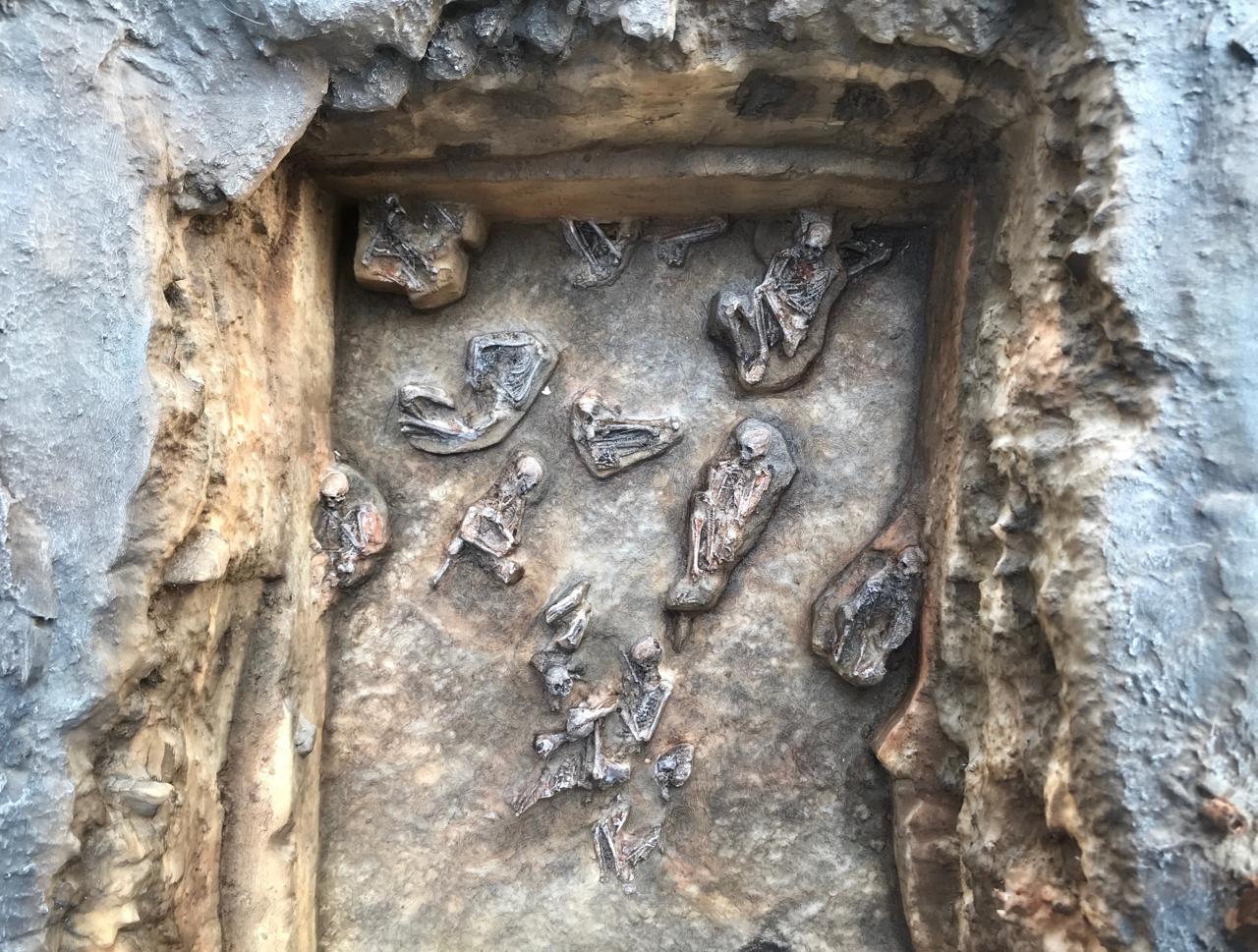 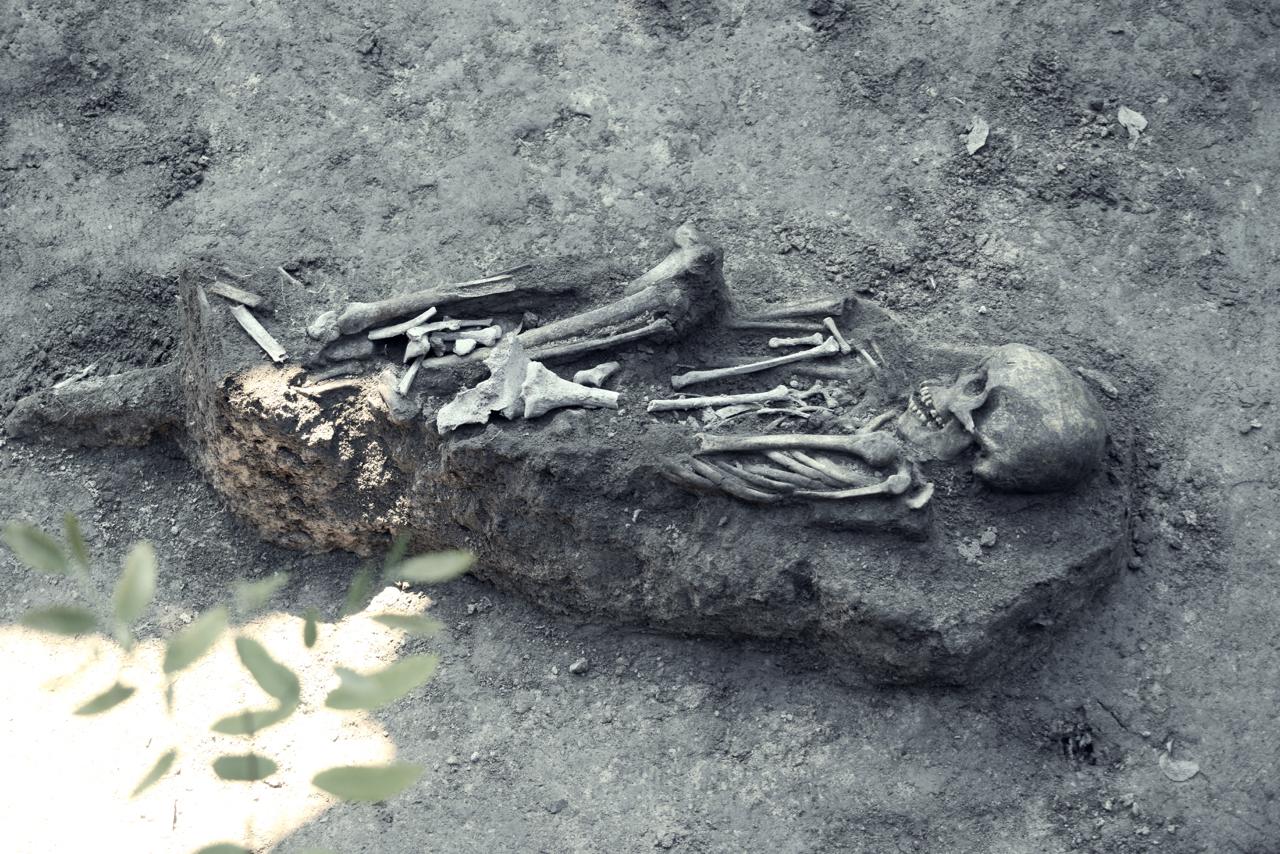 A total of 35 ancient human skeletons were excavated from the previous Wiang Tha Kan archaeological site in San Pa Tong district, Chiang Mai. Archaeologists believe that they belonged to people living in the area 1,300 years ago, or in the period of the Hariphunchai Kingdom. The evidence was found 2-2.3m underground. The people were laid either on their back or their sides with knees bent. The archaeologist team also found a horse skeleton, an ancient Carnelian stone bead, a gold bead, and a pot from the Song Dynasty. The finding of the artefacts indicates that the people in the community had welcomed merchants from other territories. The Wiang Tha Kan archaeological site was already covered. The Fine Arts Department produced 3D models with a ratio of 1:50 to show the excavation pits. The department plans to exhibit the artefacts in Chiang Mai. (Fine Arts Department) 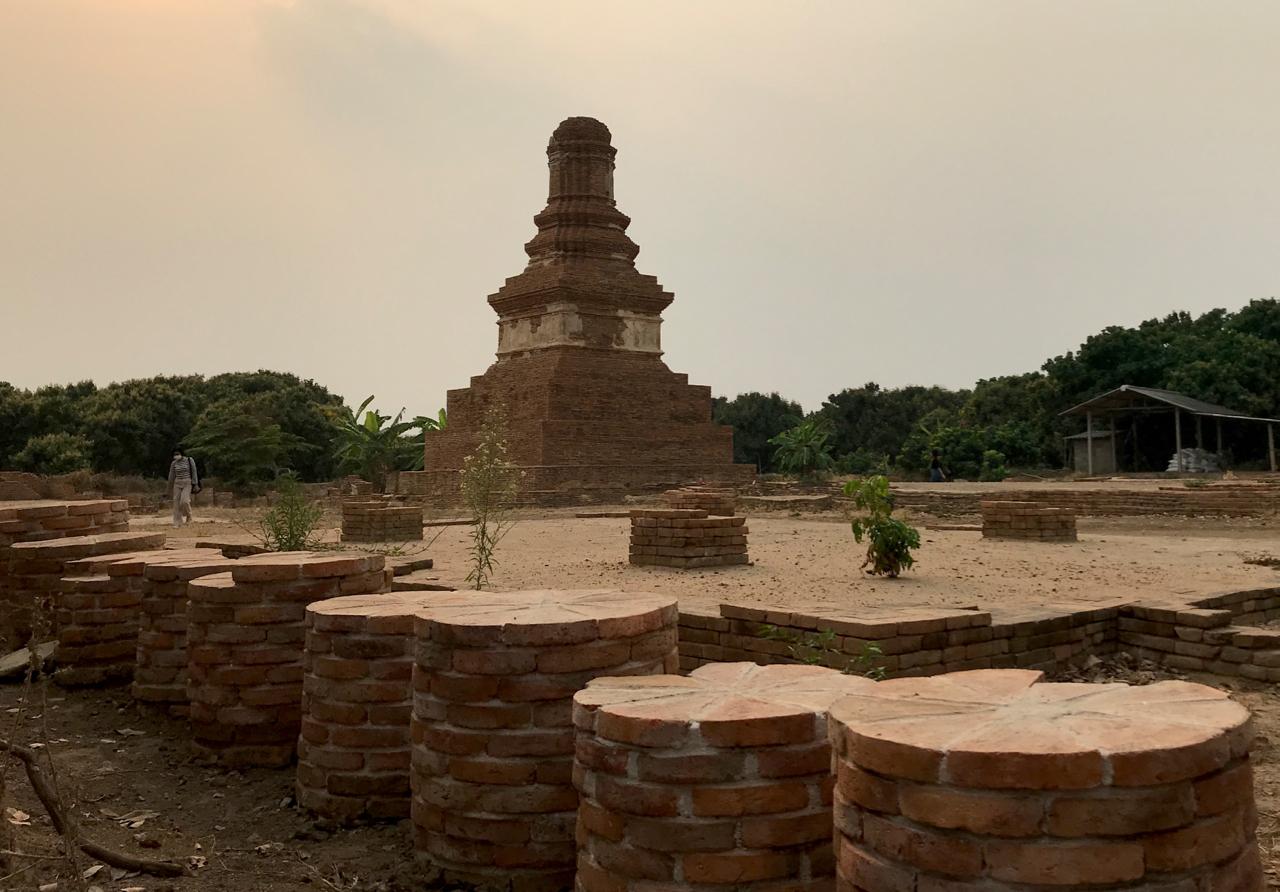 This old pagoda is located in Wat Phra Chao Dam on the bank of the Ping River in Chom Thong District, Chiang Mai. The Fine Arts Department has recently finished the restoration of the lotus-shaped pagoda, known as Phum Khao Bin style in Thailand. The team also found red brick pillars erected next to one another like the wall of an ordination hall, known as kamphaeng kaeo. The pagoda and the walls indicate the influence of the Sukhothai Kingdom (1238-1438) and the northern Lanna Kingdom (1292-1775). Karnjana Karnjanatawe 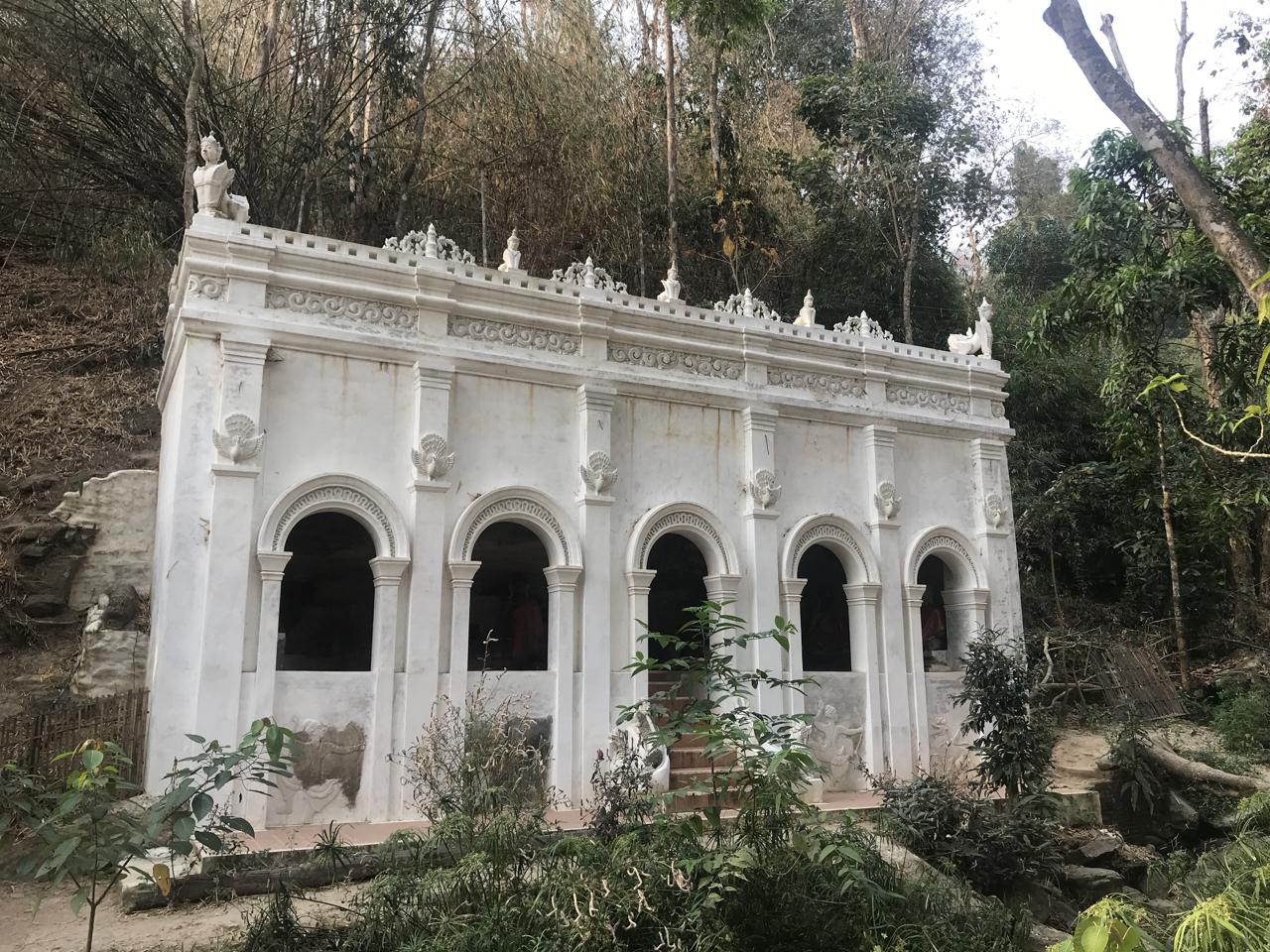 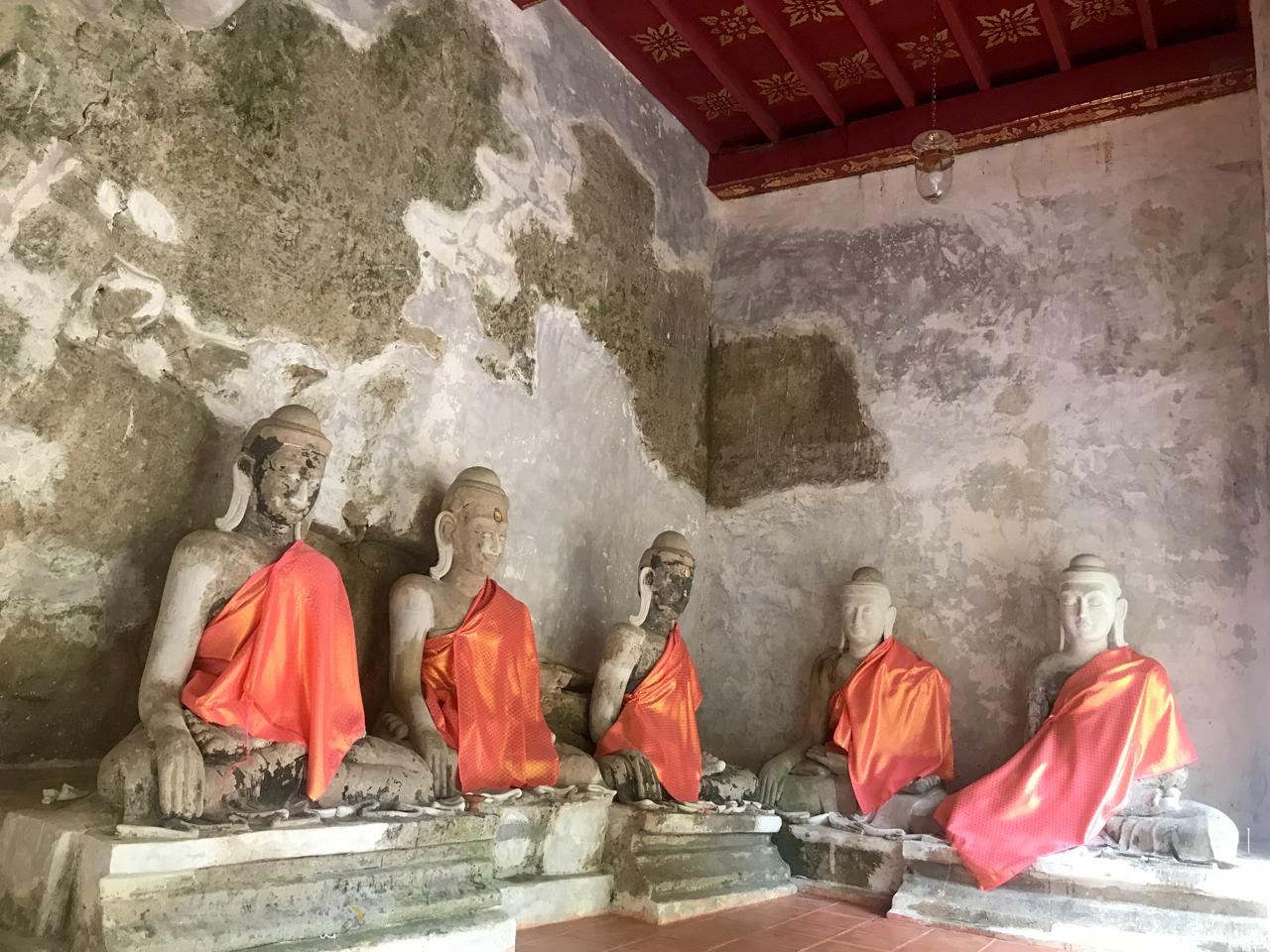 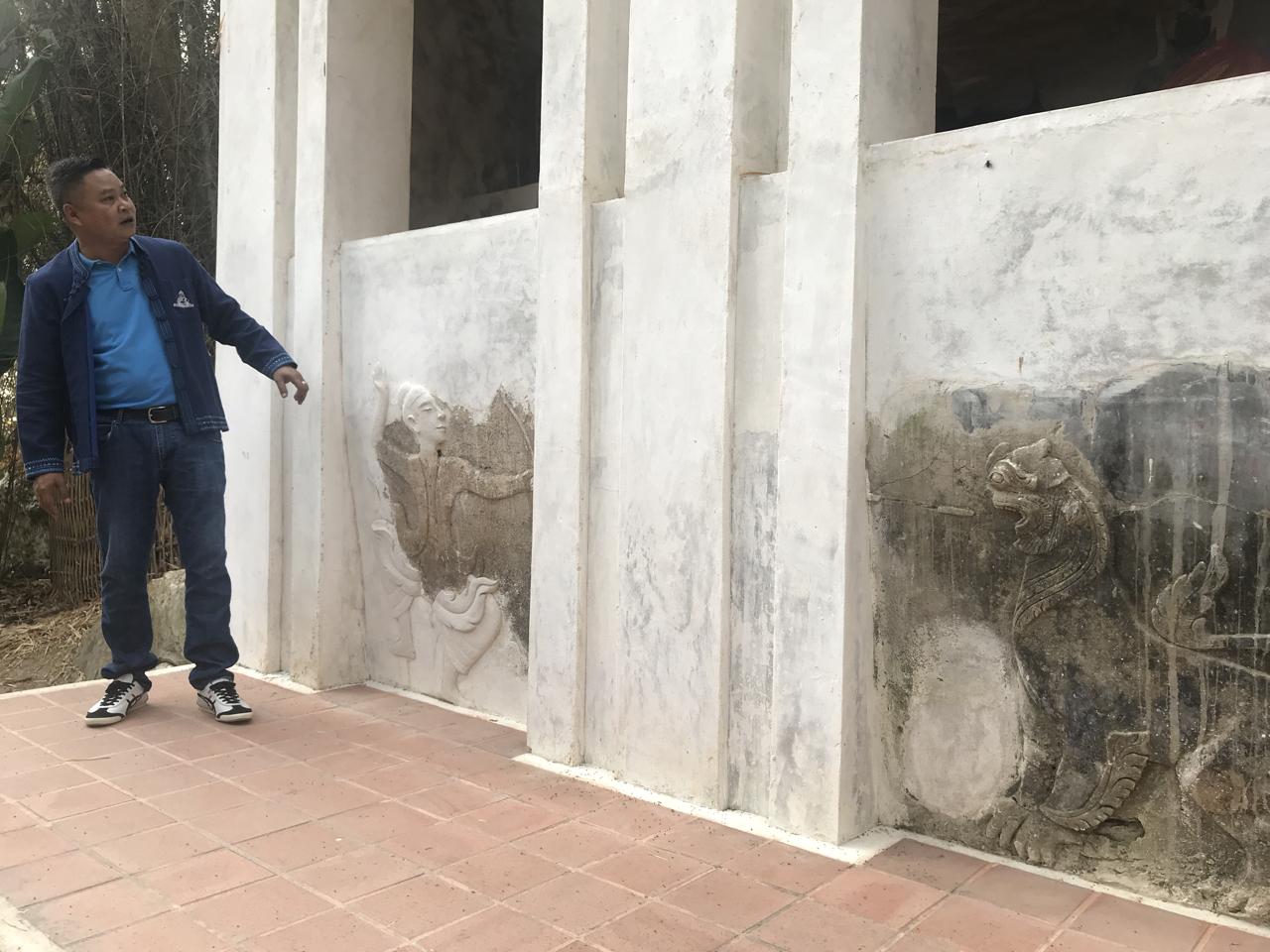 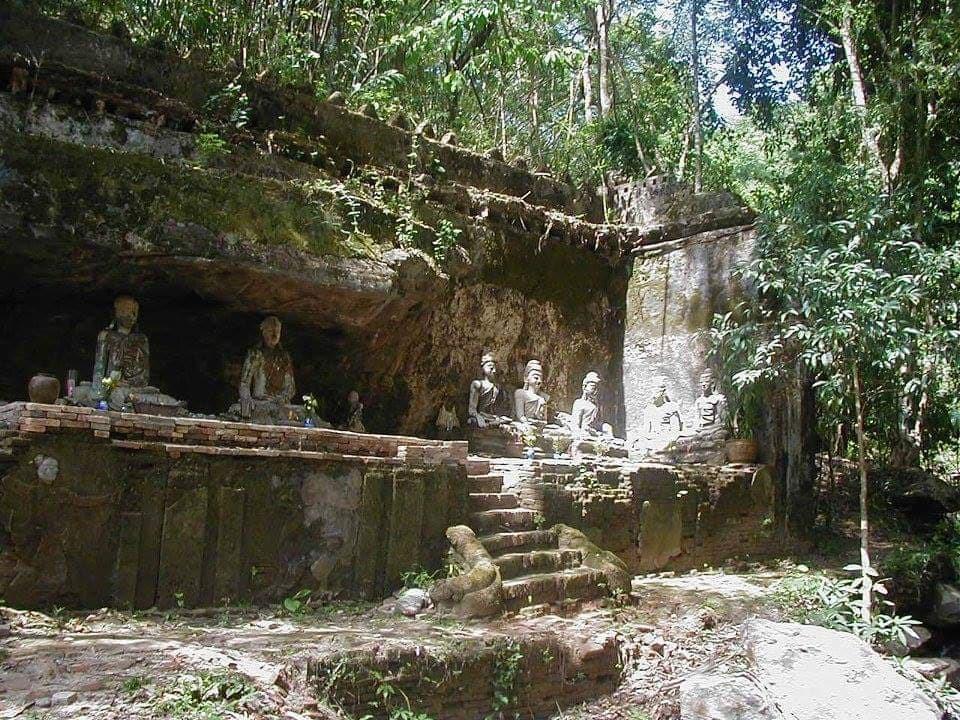 Before-and-after photos of the restoration of the prayer hall in Wat Pha Lat, Chiang Mai. The hall houses about 10 seated Buddha images. Therdsak Yenjura explains that the old stucco art has been restored to the hall, which are grey. 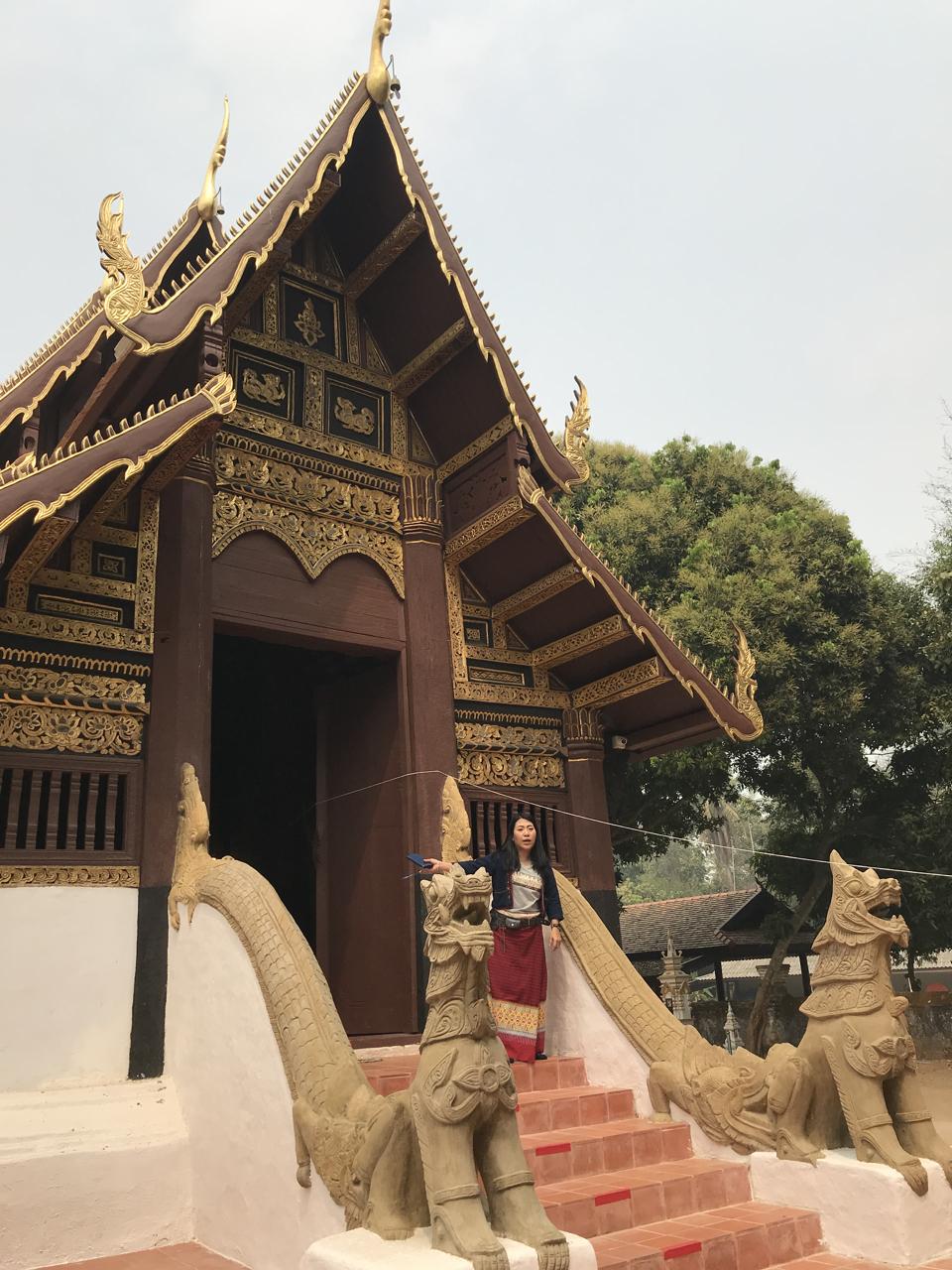 The sculptures on the staircase to the prayer hall of Wat Pa Daed were renovated last year. Details of the sculptures are clearly shown after white layers of cement used for previous restorations by locals were removed. 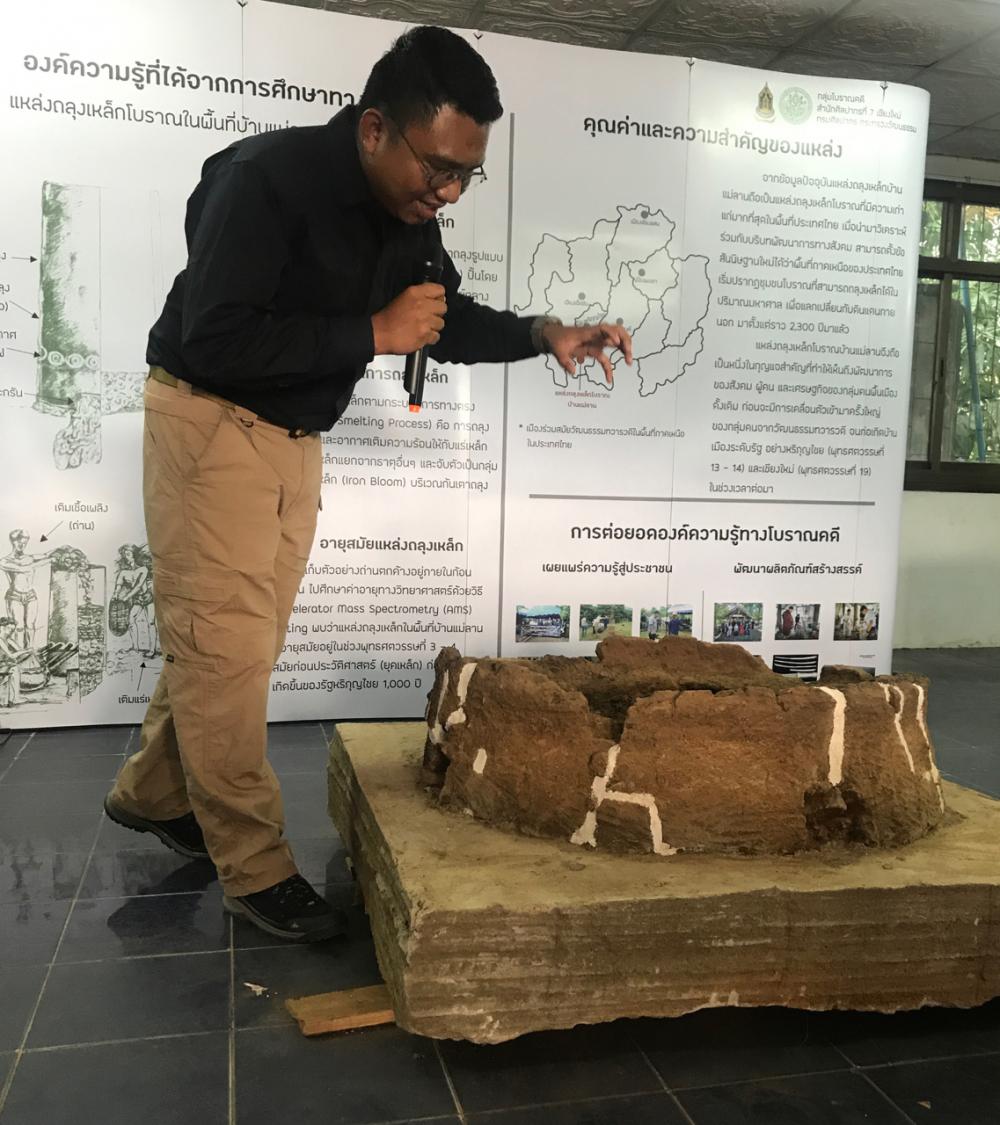 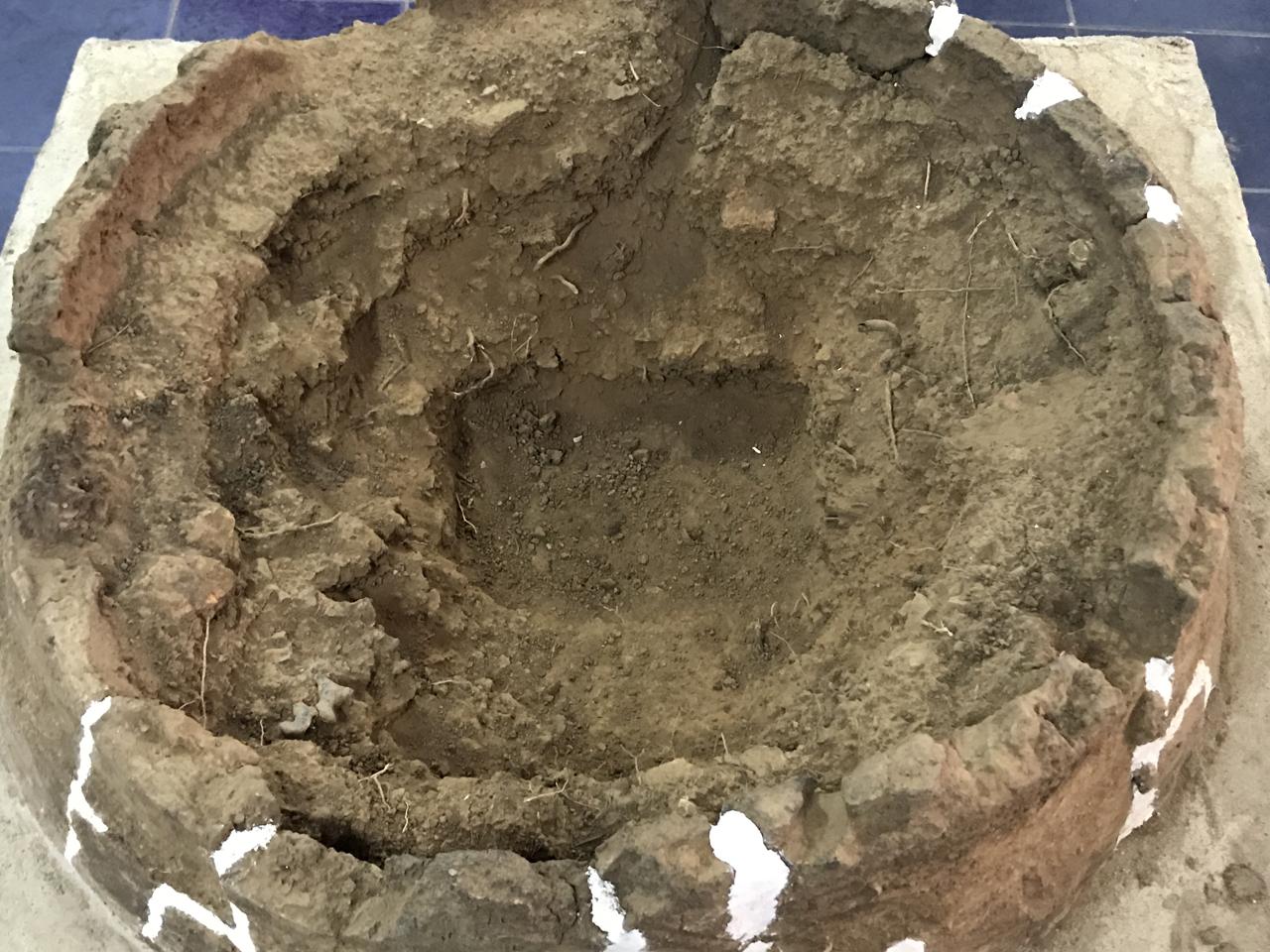 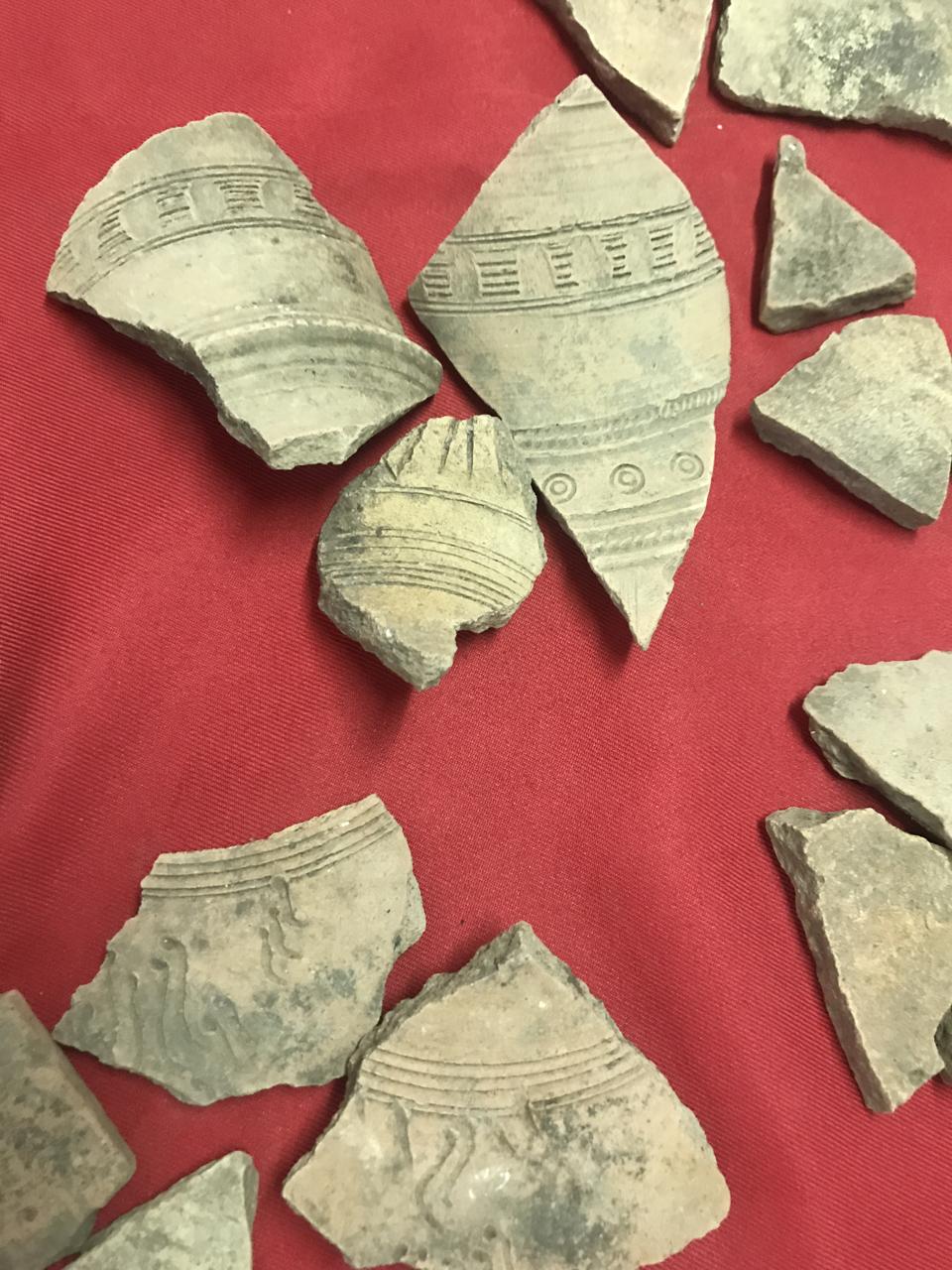 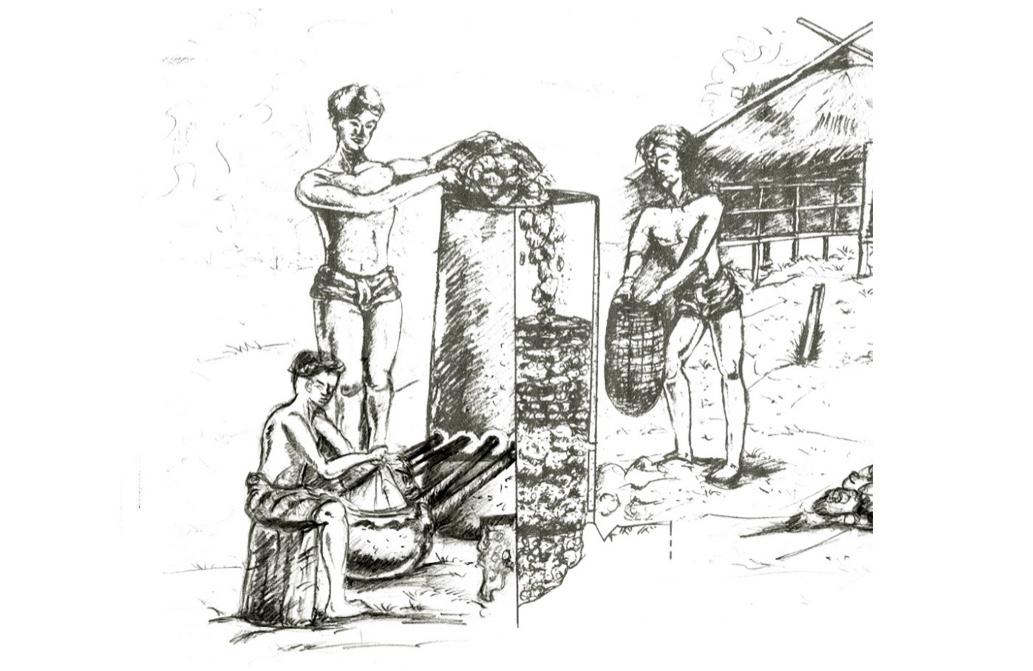 Yoddanai Sukkasem, an archaeologist of the Fine Arts Department, shows the remains of an ancient bloomery found in Mae Ping National Park in Lamphun's Li district. It was made of clay and round in shape. The size is 90cm in diameter. The height is about 30cm. It is believed to be the lower part of an iron-smelting furnace which may have a total height of at least 180cm. The team sent samples of slag found inside the bloomery to a lab at Waikato University in New Zealand. With Accelerator Mass Spectrometry (AMS) techniques, which enables small samples to be dated, it found that the age of the furnace is about 2,300 years. Evidence shows that people lived in this area during the Iron Age. The Tambon Administrative Office of Mae Lan plans to promote the community as a tourist attraction. It built a facility to house the artefacts, samples of iron slag, and broken clay pots found in the area. A craftsman group was formed to offer a workshop for those who want to know how the ancient bloomery works by smelting iron from a model furnace. 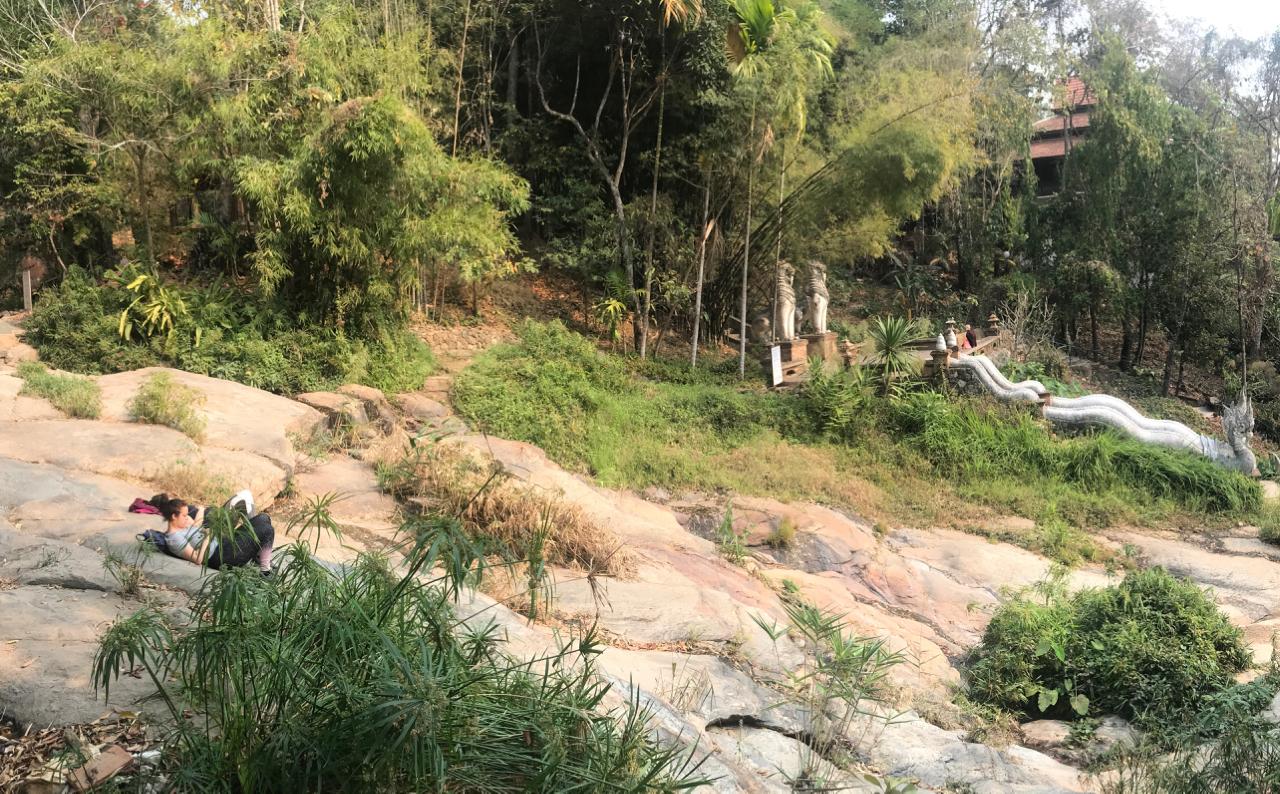 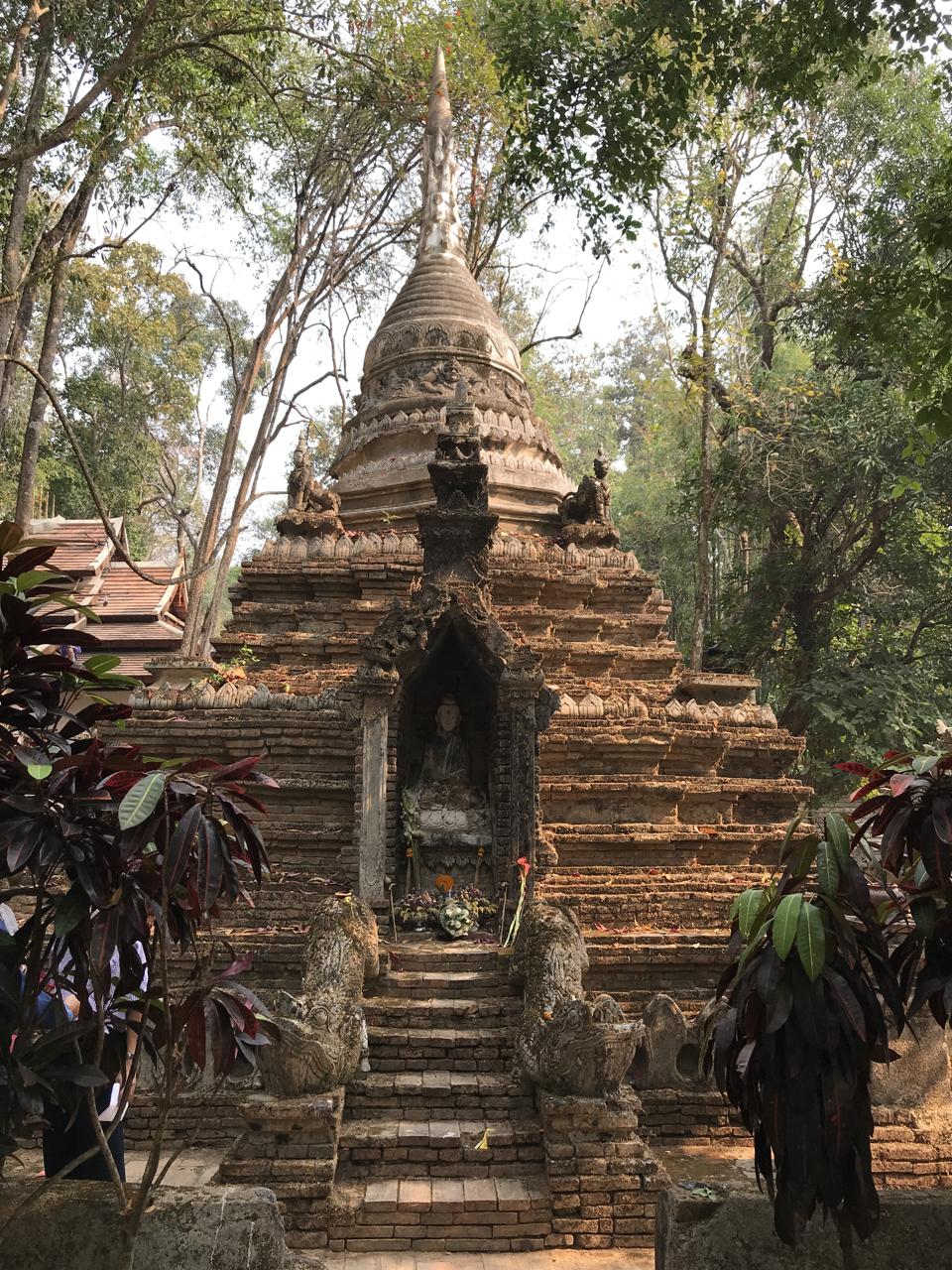 Tourists take a rest on a dry waterway at Wat Pha Lat in the Muang district of Chiang Mai. The temple also houses an old Pagoda built in the Burmese style. The temple is also well-known for its meditation courses. 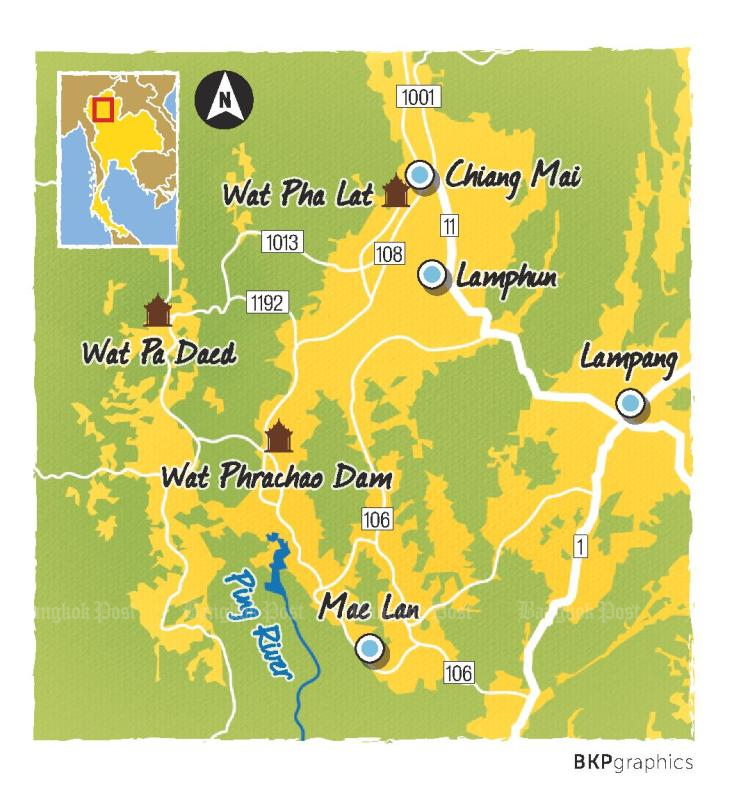