It was a Sunday morning and the skies were brushed with a streak of grey.

The rain clouds came and ruined our plans of capturing some striking pictures of waterside communities against a blue backdrop as we cruised along the Phasi Charoen canal to explore the old town of Thon Buri.

Amid a relaxing and peaceful ambience as Thailand's Covid-19 lockdown measures began to ease allowing people to go out on short-distance trips, we looked out of the window of our boat to enjoy the sight of a slow-paced life. The banks were lined with old houses of Thai and Chinese descendants, whose families mostly relocated during the Ayutthaya period.

To extend a trading route for sea merchants, King Mongkut spent 112,000 baht building this 28km-long canal after ­signing the Bowring Treaty with Britain in 1855 to connect the Bangkok Yai canal (known as Klong Bang Luang in the past) and the Tha Chin River. Officially opened during the reign of King Chulalongkorn, it was controlled with two advanced mechanical water gates, designed by a Dutch architect to use in transporting sugar.

After a 15-minute ride from Bangwa pier, our boat docked at the front of Wat Kamphaeng Bangchak, which was erected during the Ayutthaya period before being refurbished during the reign of King Rama III.

Simple yet elegant, the entrance of its main hall boasts an archaic ­painting called the Shadow Of Lord Buddha and bunches of cotton rose bas-relief. ­Inside, it is enshrined with a highly revered Ayutthaya-style statue of Phra Phuttha Bussarakam with a smiling face and a high nose bridge.

Artists during the reign of King Mongkut painted the realist-style murals for Wat Kamphaeng Bangchak.

Painted with powder colours, the beautiful murals recount the Jataka tales, with some characters of foreign traders and soldiers dating back in time when Siam became an important ­trading hub in Asia. Visitors also can admire a significant scene of angels gathering to greet Lord Buddha while descending from heaven to the world.

"With funds of 14 million baht, the Fine Arts Department spent five years restoring all murals here after some of them faded because of humidity. Based on red and indigo, artists had used the coloured gradient techniques to ­represent day and night in the world, in which Buddha is the core," Thanat explained. 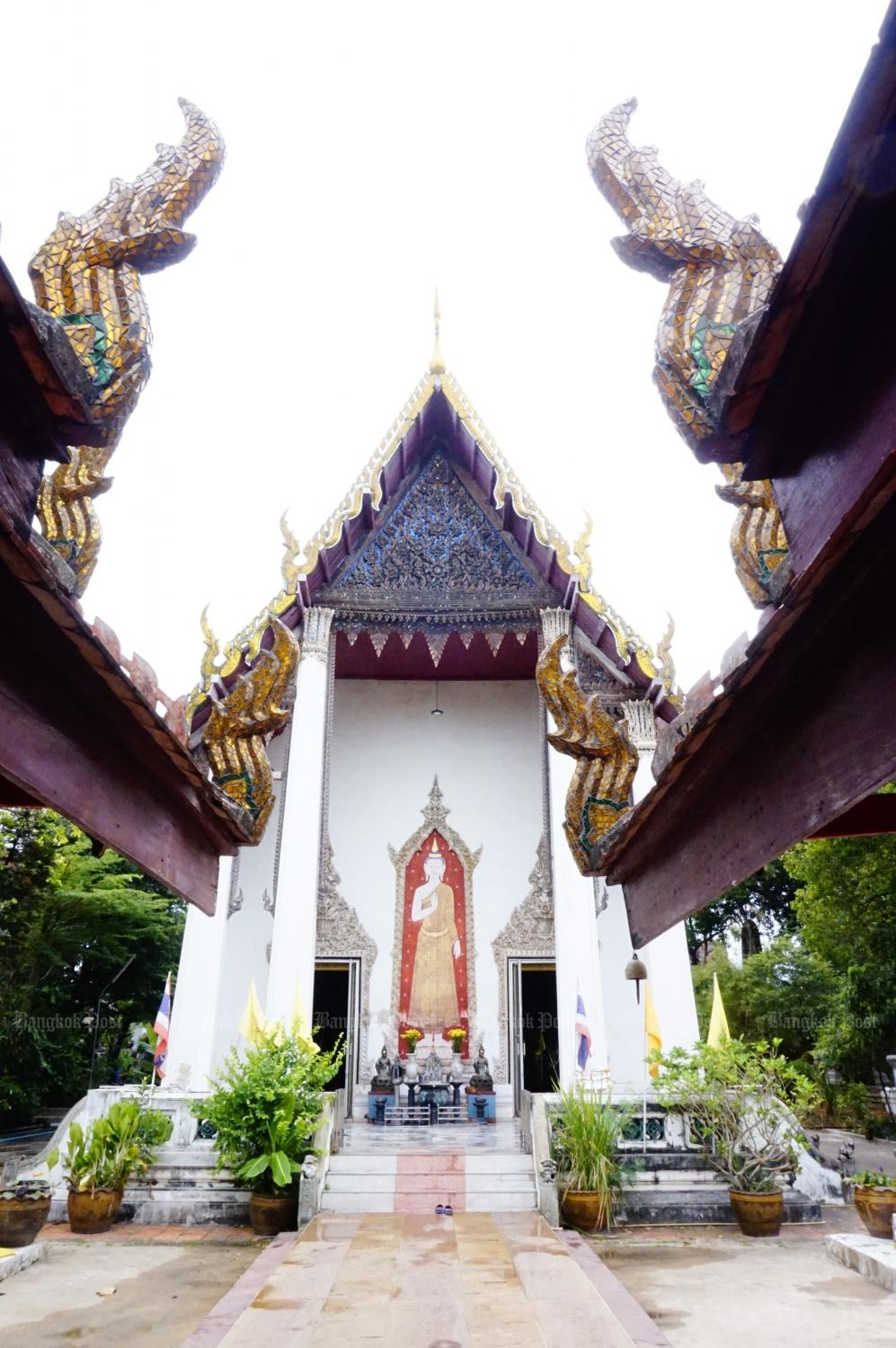 Wat Kamphaeng Bangchak has long been the heart of Klong Bang Luang community.

"Each scene features the national flags from several countries like Malayu and Denmark to indicate the thriving trading hubs both in Siam and neighbouring countries."

Walking through narrow alleys in the Klong Bang Luang community, we discovered Wat Suwankiri that was believed to be constructed during the late Ayutthaya or early Rattanakosin eras. Tucked away in Sutham Suksa School, this ancient ­monastery was left abandoned before being combined with Wat Khuha Sawan Worawihan in 1917.

Klong Bang Luang community is a good place to take a break and enjoy slow-paced life.

"This old temple was listed in King Chulalongkorn's map. During the reign of King Rama VI, many small-scale temples were abandoned and merged with other ­larger temples. This reflected the transition of ­Siamese society when people chose to work as government officers rather than being a monk. Now, Bangkok has about 500 deserted temples and 433 still in service," ­Thanat said. 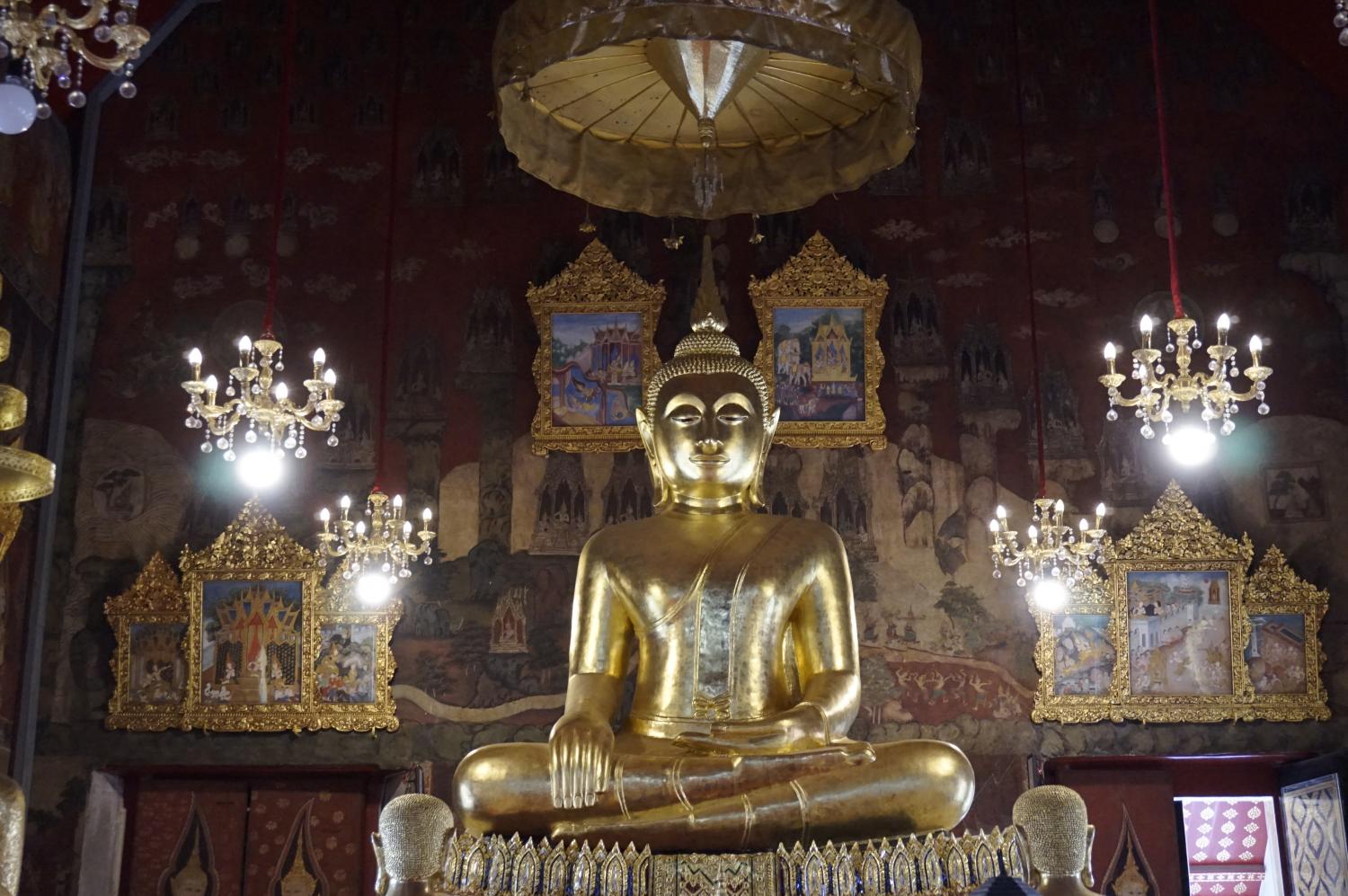 Designed in the Chinese style, the ­modest building was renovated by a Chinese pilgrim, showcasing a principal Buddha image crafted from sandstone and a unique collection of two chedi-like stuccoes on the walls. Here, villagers come to pray for good health and prosperity on any occasion.

A short walk from Wat Suwankiri, we travelled back in time to when King Rama I renovated Wat Khuha Sawan Worawihan and gave an imitation Ayutthaya-style Buddha statue to replace the old one he moved to Wat Phra Chetu­phon Wimonmangkhlaram. Its main hall is surrounded with spacious cloisters, home to a wide range of timeworn sandstone and metal Buddha images made during the Ayutthaya period.

After lunch, we shifted from a boat to a red public songthaew for a short drive to Wat Dusitaram. Situated in Bangkok Noi district, this holy sanctuary was built during the Ayutthaya era and Prince Maha Senanurak overhauled its compound during the reign of King Rama II to install his sister's ashes. 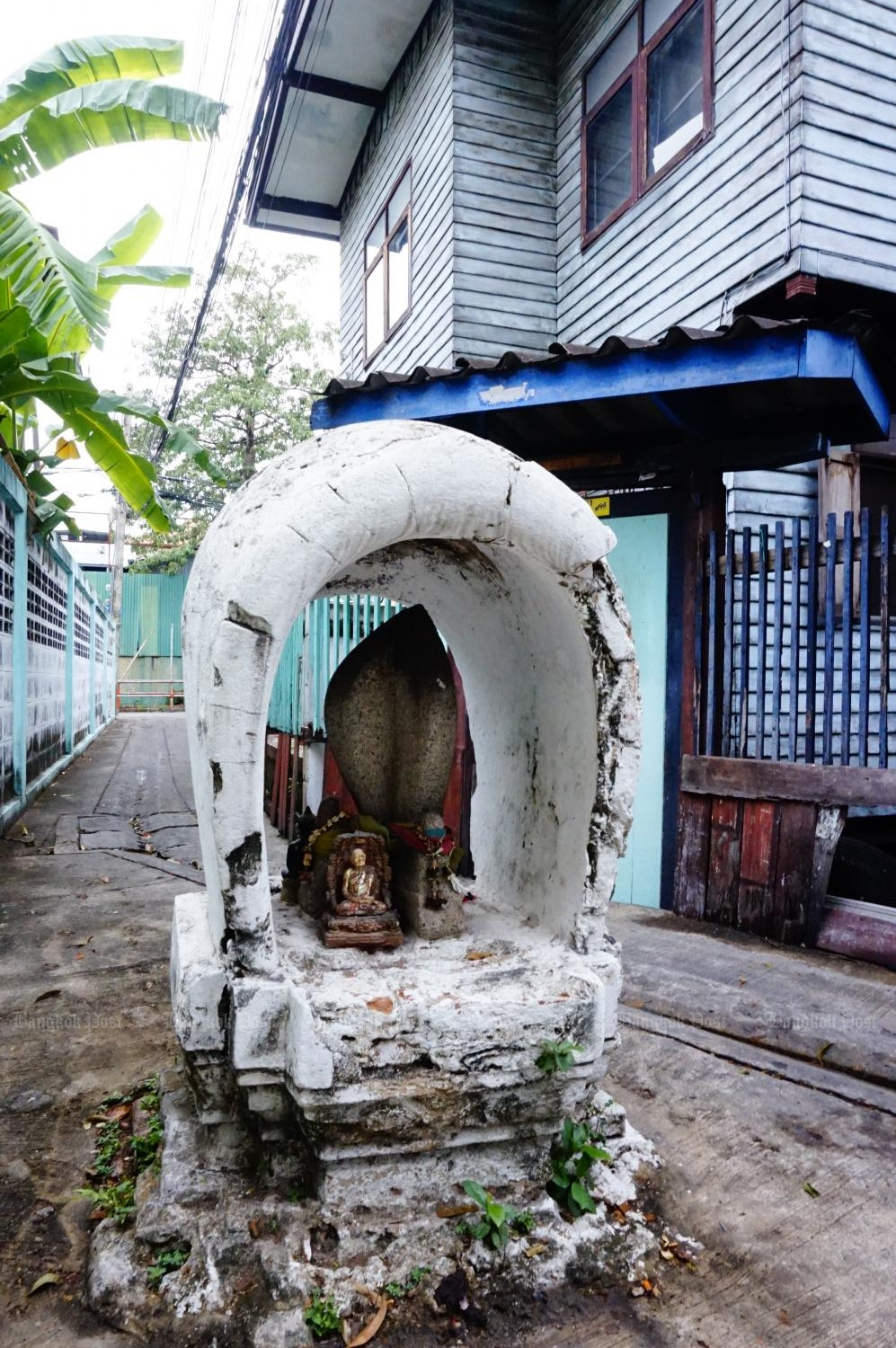 A majestic ubosot houses a traditional Ayutthaya-style Buddha image in the posture of subduing the Mara, with a big face, thick mouth and a high nose bridge. Also in place are a pair of Buddha statues -- given by King Rama III -- in the attitudes of pacifying the ocean and urging a sandwood image not to rise from the seat.

Created during the reign of King Rama III, the walls are covered with ­astonishing murals that recap Buddha's life and how his relics were allocated to 108 kings after he entered nirvana. Above the windows, visitors can admire a collection of beautiful old paintings on glass depicting the Jataka tales, heaven and elephants in different types that can be found in the Himmaphan Forest. 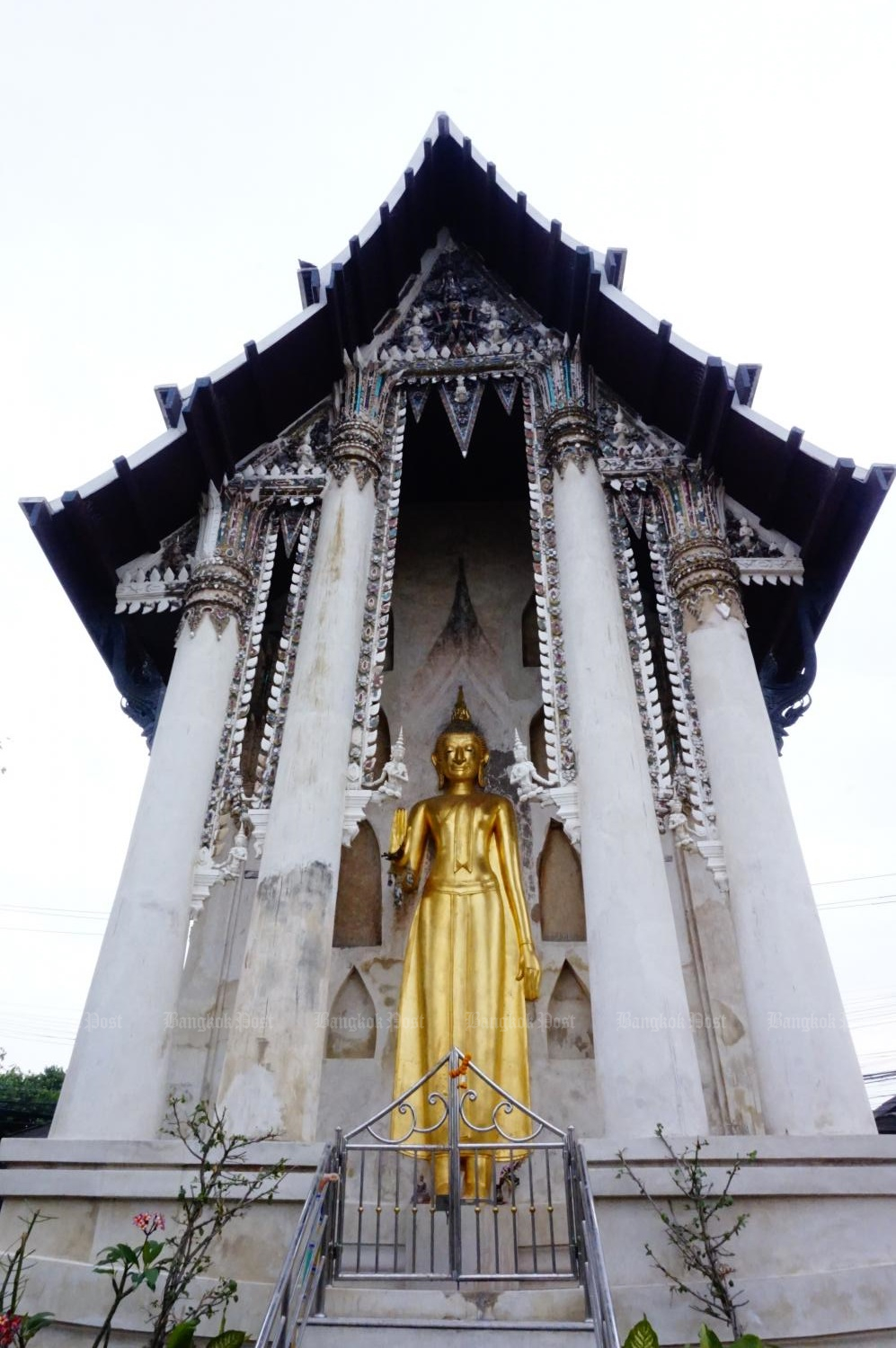 "This temple was formerly known as Wat Sao Prakhon before Prince Maha Senanurak renamed it Wat Dusitaram, which means city of heaven. The cloisters around the vihara are designed to look like a river basin that encircles the centre of the Buddhist universe. In other words, it means people have to go through the round of rebirth before having an audience with Buddha," Thanat explained.

"One of the highlights is the eye-catching mural behind the principal Buddha image illustrating the story of Buddha ­image in a posture of subduing the Mara. It features the characters of foreign soldiers that are like a demon, who come to intrude and exploit the land of Siam." 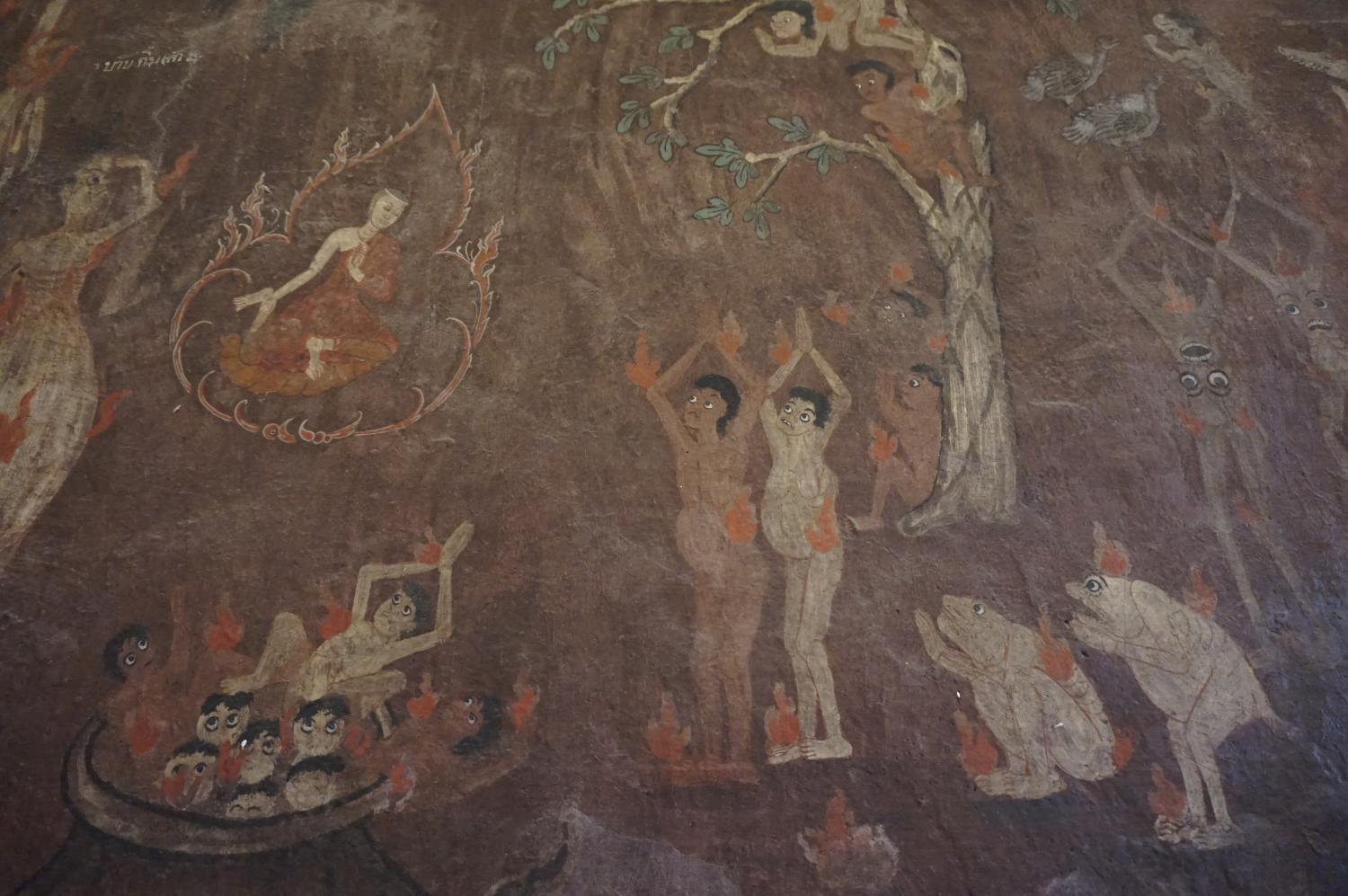 Based on Buddhist beliefs, the murals at Wat Dusitaram illustrate how people are punished in hell.

Opposite, abandoned Phummarin Ratchapaksi Temple is reminiscent of the glorious days of the Ayutthaya Kingdom and now belongs to Wat Dusitaram. The age-old main hall stands on the boat-like basement using traditional wall bearing techniques.

Inside, it's enshrined with a sacred Ayutthaya-style statue of Luang Pho Dam, while its compelling murals were ­recreated in the reign of King Rama III to capture a scene of Buddha teaching his mother on the second heaven. Paintings on glass at Wat Dusitaram.

Amid a cool breeze, Thanat led us on a walking tour from the Bangkok Noi ­canal to Bang Yi Khan district, home to deserted Wat Suan Sawan. Sitting in the middle of Ban Poon community, this ­venerable monastery compound ­features a ­boundary marker and the ruins of two stupas, constructed in the late Ayutthaya period.

Once a garden of arts, the main hall showcases an old-fashioned pediment graced with bas-relief of the mythical Chula Mani Chedi, where Buddha's ­relics are contained, while inside there is a likeness of Luang Pho Dam that was once gilded with gold leaf. 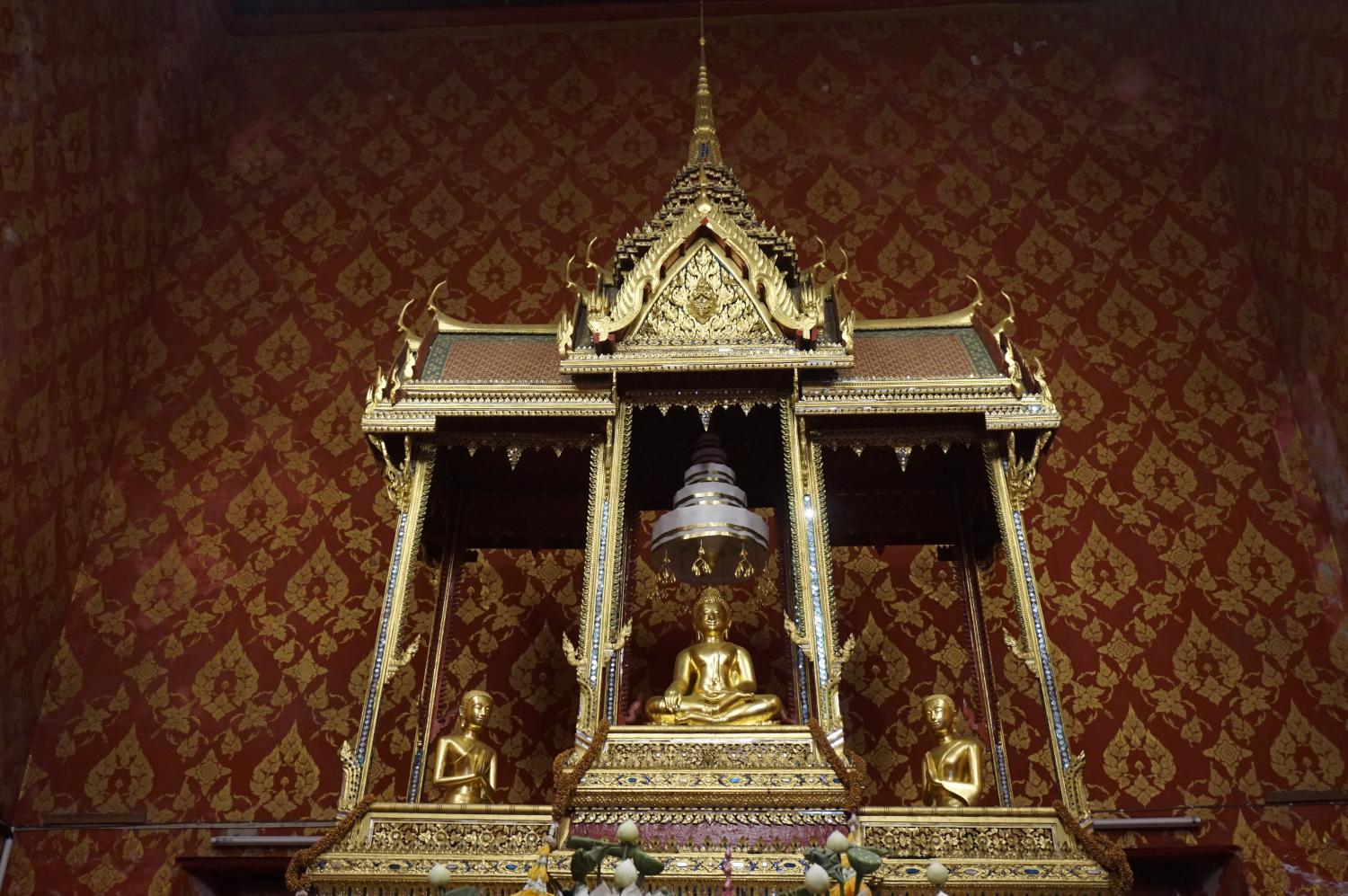 A short distance from Wat Suan Sawan, our day trip ended at Wat ­Kharueha Bodi. It stands on land which King Rama III gave to Phraya Rajmontri ­Borirak as a residence before he moved to Tha Phra district and built this temple in tribute to the king.

The towering ubosot has a Chinese-style pediment on its roof, ­decorated with gold-gilded motifs of plants and flowers. It is home to a hallowed ­Lanna-style gold statue of Luang Pho Saengkham, with a round face, big chest and muscular arms sitting on a miniature carved wooden throne. The murals draw inspiration on a classic Thai-style pattern of lotus buds on a red background.

"There were no gables or toothlike ridges on the edge of gables. Previously, the landscapes were verdant with green courtyards so that the vihara and ubosot were visible from the river," Thanat said.

The Bangkok Metropolitan Administration provides free shuttle boat services from the Bangwa BTS station to the Artist's House (Ban Silapin Klong Bang Luang) from 9am to 4.30pm during weekends.