Humble museum holds keys to past

In spite of its small size, Chiang Saen National Museum is an immense source of knowledge on Lanna art and history

Entering the main hall of Chiang Saen National Museum in its namesake border town 64km or so northeast of Chiang Rai downtown, I was greeted by three beautiful seated Buddha images from the 16th century. Each had a pretty chubby body and a round face with a prominent chin and a closed-lips smile, typical of Chiang Saen, aka Lanna, style. 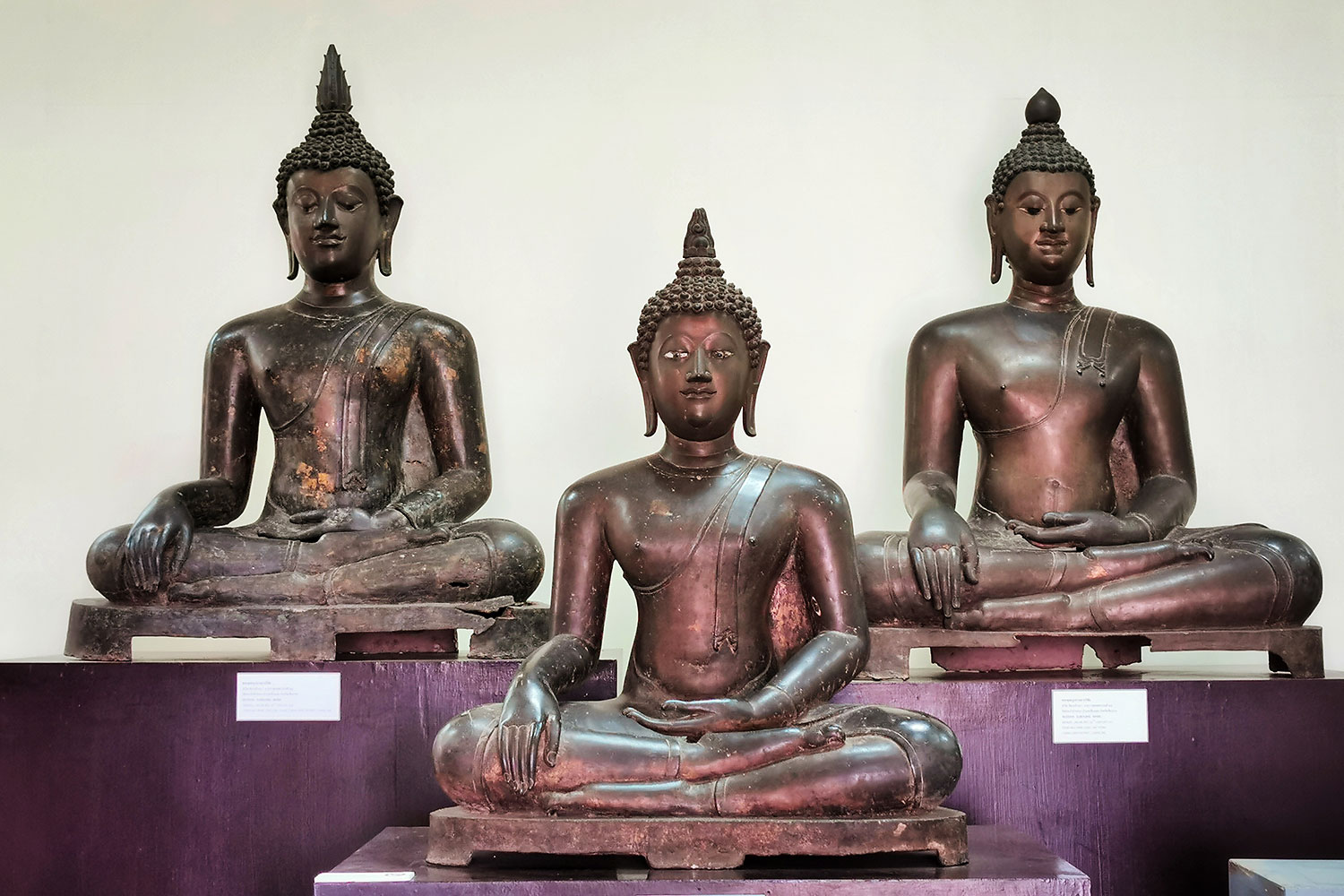 Chiang Saen National Museum boasts an impressive collection of centuries-old Buddha images. The priceless religious sculptures come in various sizes and are made of different materials. Apart from the classic Chiang Saen-style statues like the ones in the main pictures, there are also many that bear more down-to-earth designs, especially smaller ones. But despite the differences, most, if not all, of the Buddha figures are adorned with a finial on the top of the head called phra rassami, a symbol that Lord Buddha has attained enlightenment. One of these photographs shows a highlight of the museum. It’s a 70cm-tall phra rassami said to have been hauled from the nearby Mekong. Imagine how big the entire sculpture must have been. It’s a pity archaeological excavation of the international river could not be undertaken. Hence, the existence of the legendary giant Buddha, which is known by the name of Phra Chao Lan Tue, remains a mystery.

There are minor differences though. For example, the finial on the head of each figure came in different designs. Also, the forked-end part of the robe that ran down the left shoulder on one of the sculptures stopped just around the chest, a lot shorter than those of the other two.

The more you look into details, the less similar they become.

To my left, there was another bronze statue. However, it wasn't a Buddha but a hermit called Rusi Kammalo with an inscription at the base. The hermit was mentioned in the legend of an ancient city called Hirannakhon Ngeonyuang believed to have been located in this area long before Chiang Saen was established in 1328.

The next set of exhibits took me even further back in time. Primitive tools and various items from as far as the stone age revealed that this part of the land by the Mekong River has been inhabited by people since the pre-historic period. Life must have been tough. But it was probably very peaceful, I guess. At least politics was not yet invented.

As I explored the museum further I learned about the more sophisticated art and culture of people in later periods.

One of my favourite items was a bamboo whistle used by young Akha men to call their girlfriends at night. I couldn't help but imagine how the guy's heart must have been pounding as he sneaked closer to the woman's home. What if her father showed up instead? He must have used the whistle before and the signal was no secret. This just made me want to know more about the Akha tradition.

In one of the exhibition rooms, which features Lanna history in the 19th century when the British Empire was a formidable colonial power, I learned for the first time that the Indian rupee was widely used in the Lanna region. Even salaries were paid in the rupee.

The more I explored the museum, the more eye-opening knowledge I collected.

Two hours quickly passed and it was already closing time. I left the humble museum feeling grateful for the knowledge and the inspiration for me to study more. 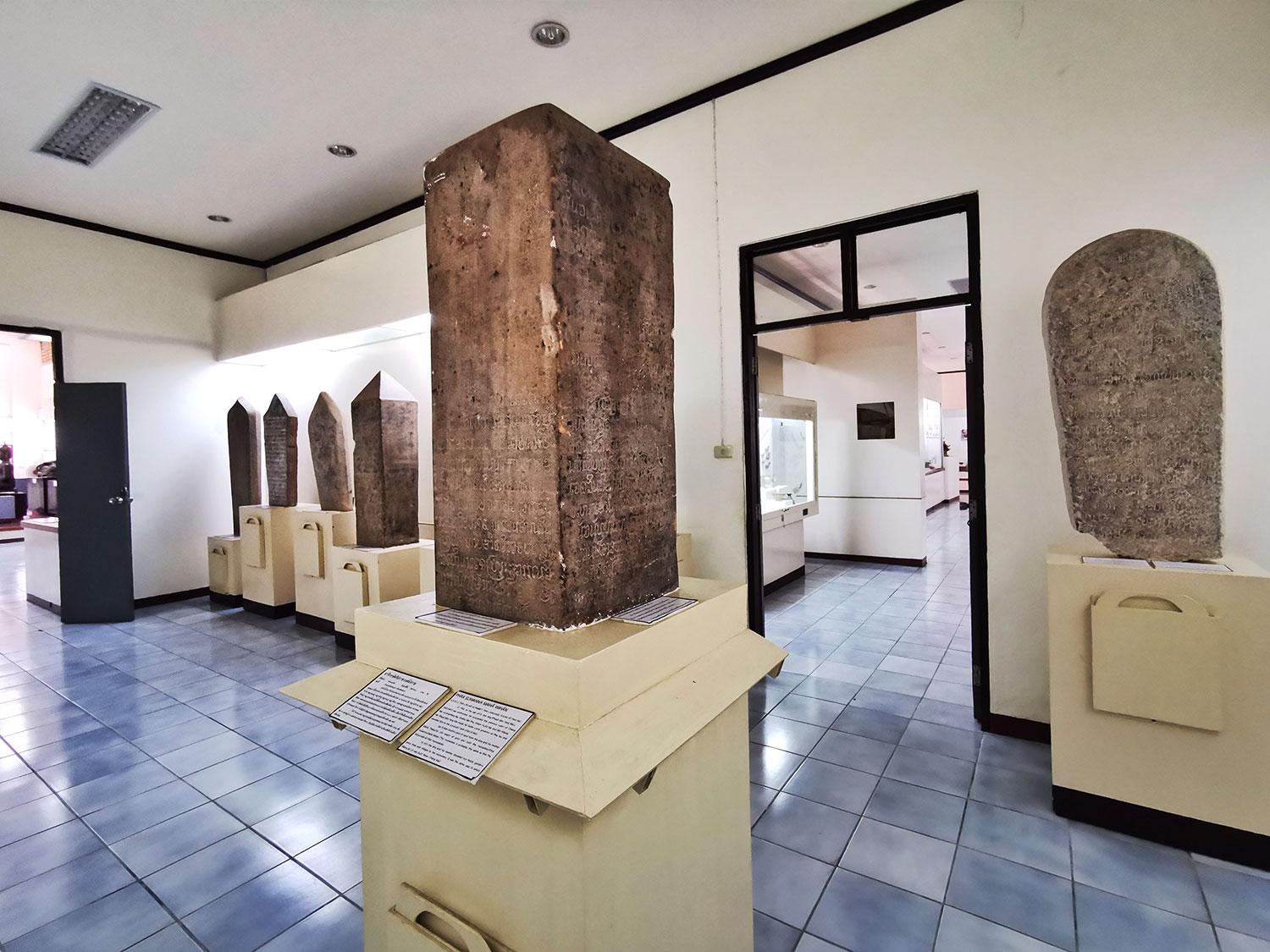 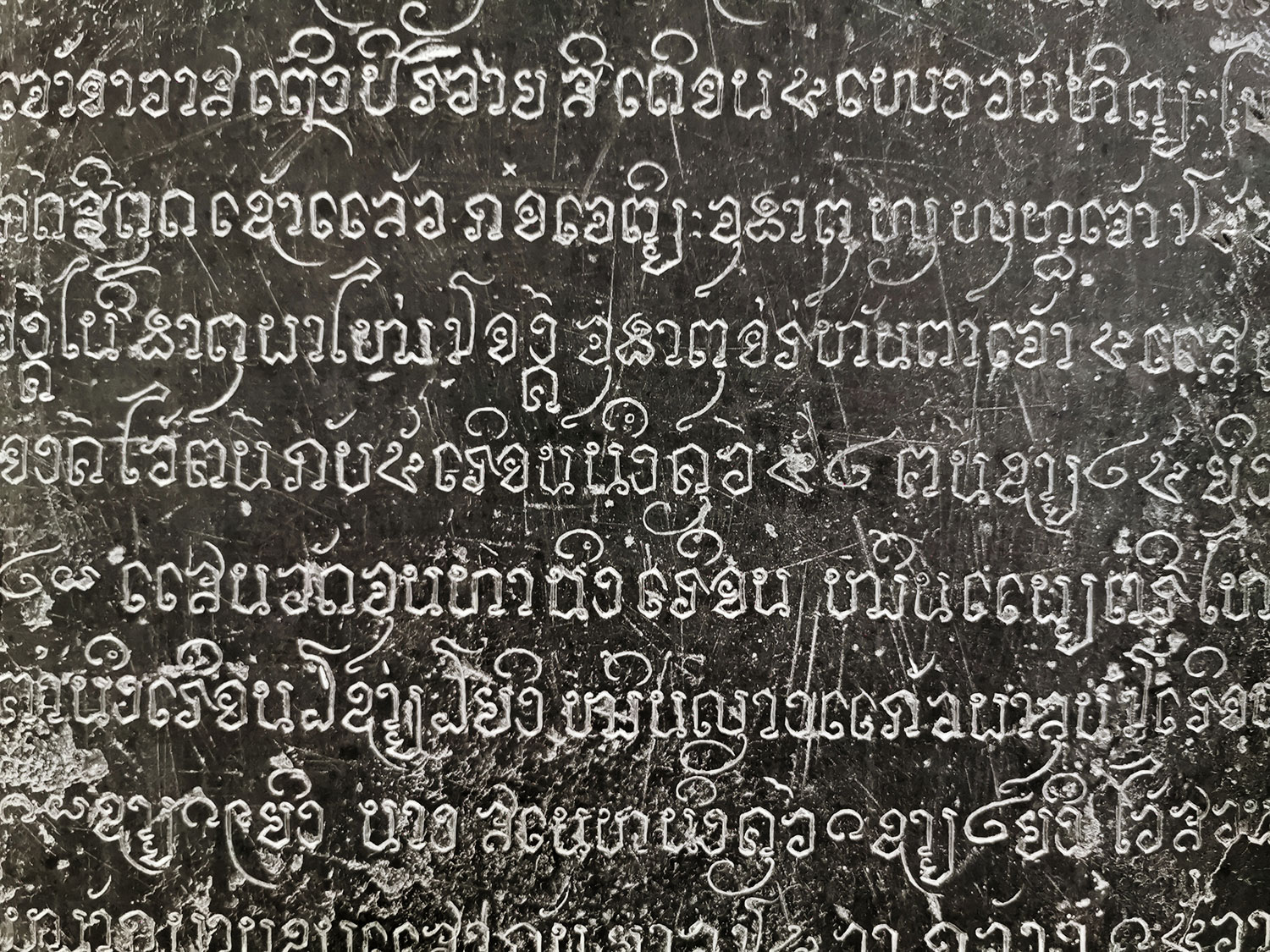 A section of the museum is dedicated to stone inscriptions found in Chiang Rai and nearby Phayao province. Most of the texts were recorded in the ancient fak kham northern alphabet. Fortunately, each inscription comes with a summary of the deciphered text. The one in the middle of the exhibition room, for example, is about members of the Mang Rai Dynasty, which included Chiang Saen founder and third monarch of the Lanna Kingdom Phya Saen Phu. The inscription, which was a big help to historians in determining the succession of Lanna kings, was created in 1411 during the reign of Phya Sam Fang Kaen, Lanna’s eighth king. Texts on the other slabs are mainly about religion-related events such as the construction of Buddhist monuments. 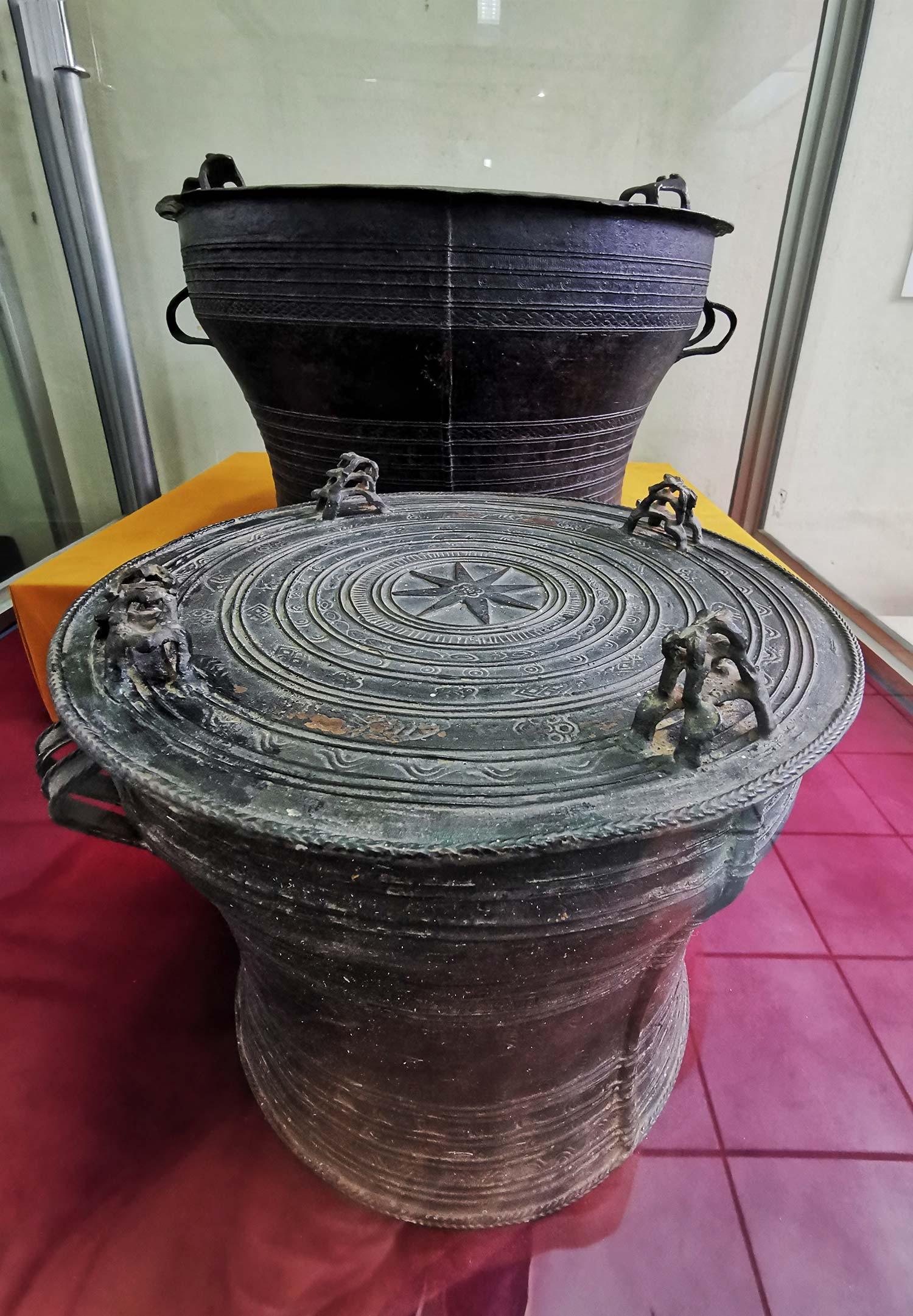 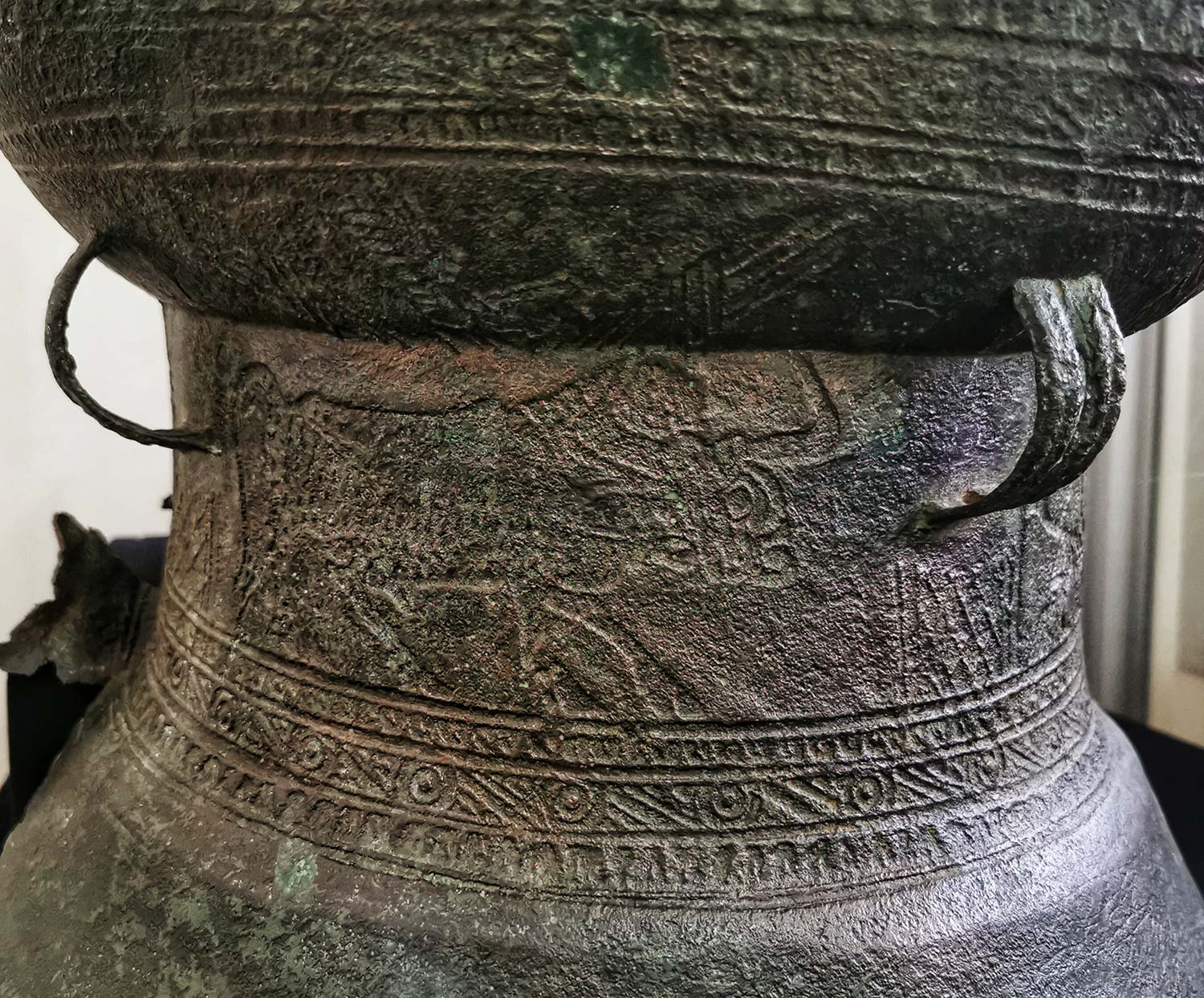 Bronze drums are a legacy of people from the pre-historic period. They were found in several areas of Southeast Asia and southern China. One of these ceremonial drums depicts on its side a picture of a cow. It was unearthed from Chiang Rai’s Mae Chan district. They are said to be over 2,500 years old. 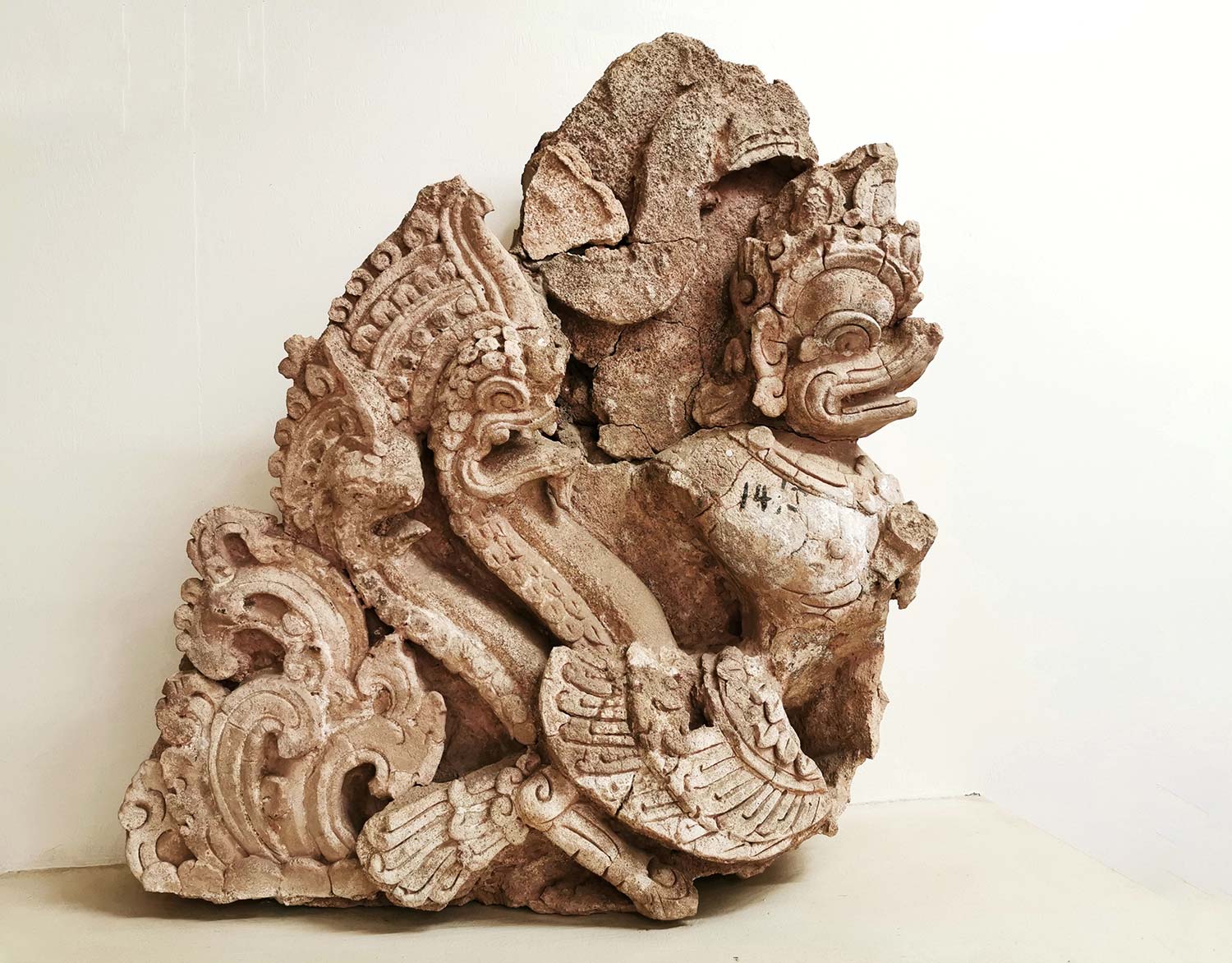 Apart from Buddha images, another signature art of Chiang Saen is intricate stucco work, which creatively combined styles from contemporary and earlier cultures from Sukhothai, Hariphunchai, Bagan, India (via Bagan) and China (Yuan Dynasty). Shown in the top left picture is a piece of mid-14th century stucco from Wat Pa Sak, a now deserted temple near the Chiang Saen National Museum where it is on display. The handsome Kala Face it portrays is unlike the same demon found elsewhere. The differences are not easy to explain but if you are interested, you can easily find that out by searching for images of the face from the internet and compare. The different beliefs about the Kala Face are also interesting. 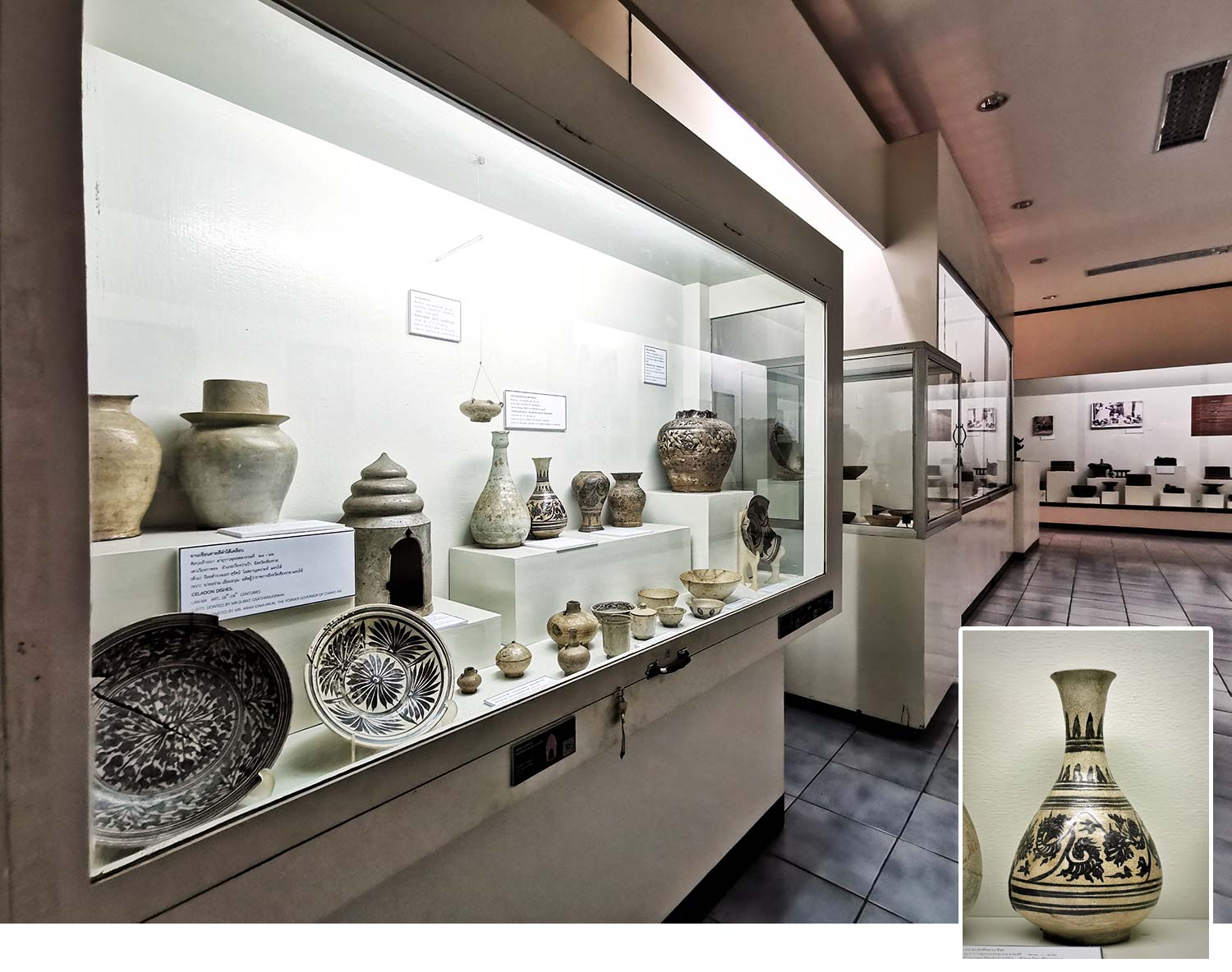 Chiang Rai province is home to a number of ancient kiln sites. At Chiang Saen National Museum, you’ll get to appreciate antique ceramics from Wiang Ka Long, Phan and Chiang Saen sites. In Wiang Ka Long, which is in Wiang Pa Pao district, vessels with underglaze black patterns were found. Phan and Chiang Saen are located in their namesake districts. The first produced celadon pottery, while the latter is known for unglazed stoneware. The pear-shaped vase shown in one of the pictures dates back to the 16th-17th centuries. Can you guess where it was from?

Even nowadays, Lanna-style silverware and lacquerware are second to none. At the museum, you can feast your eyes on exquisite works by craftsmen of previous centuries. 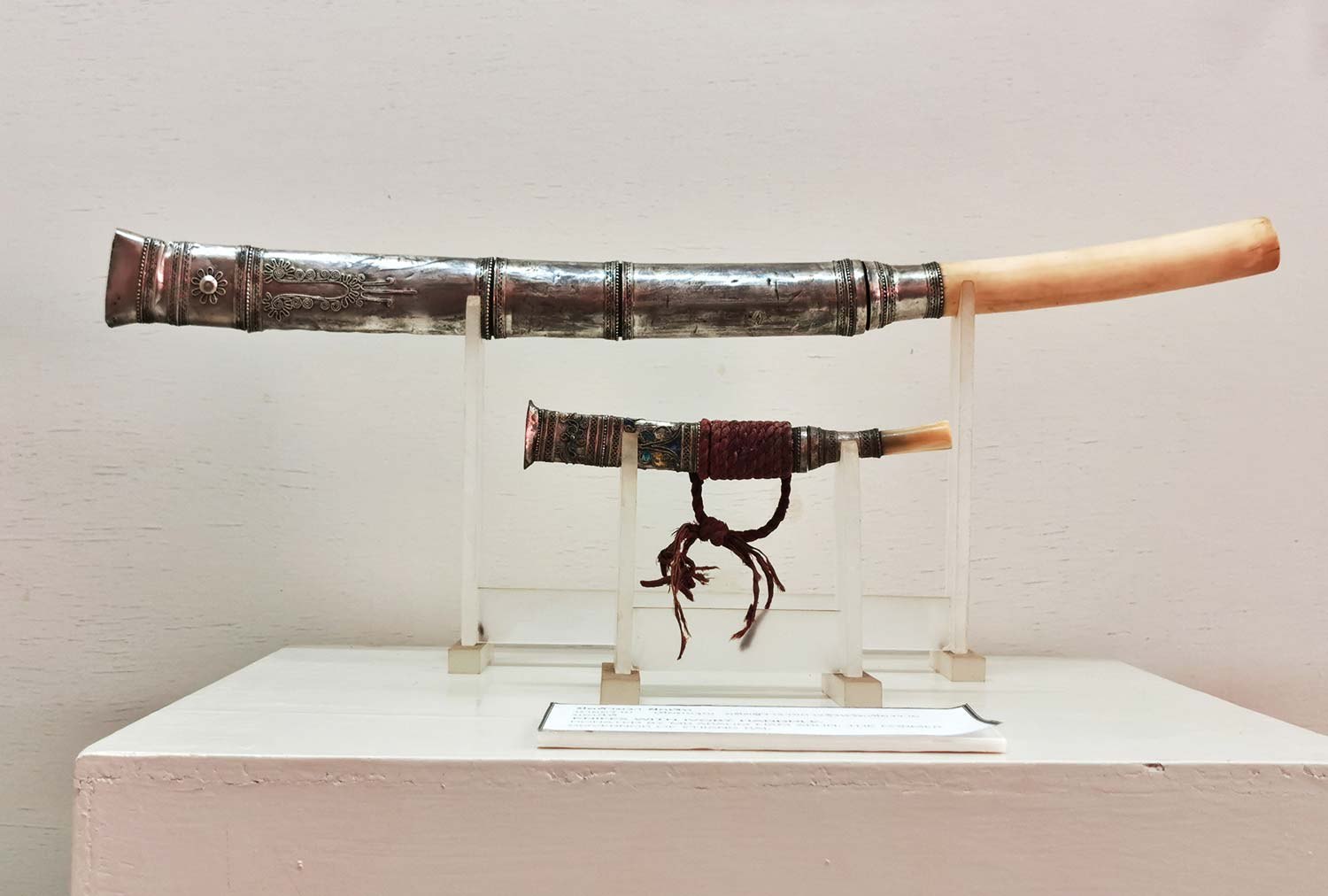 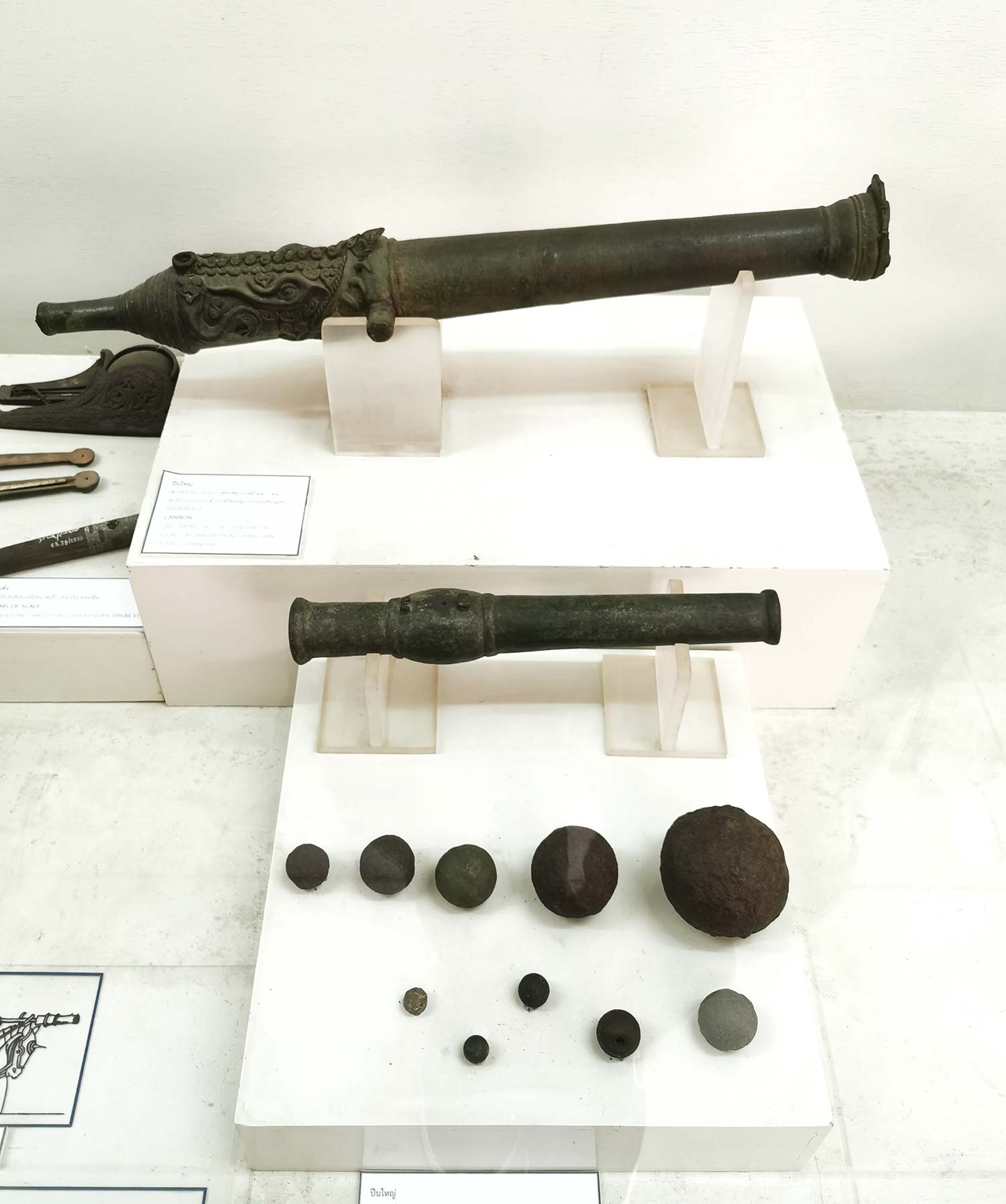 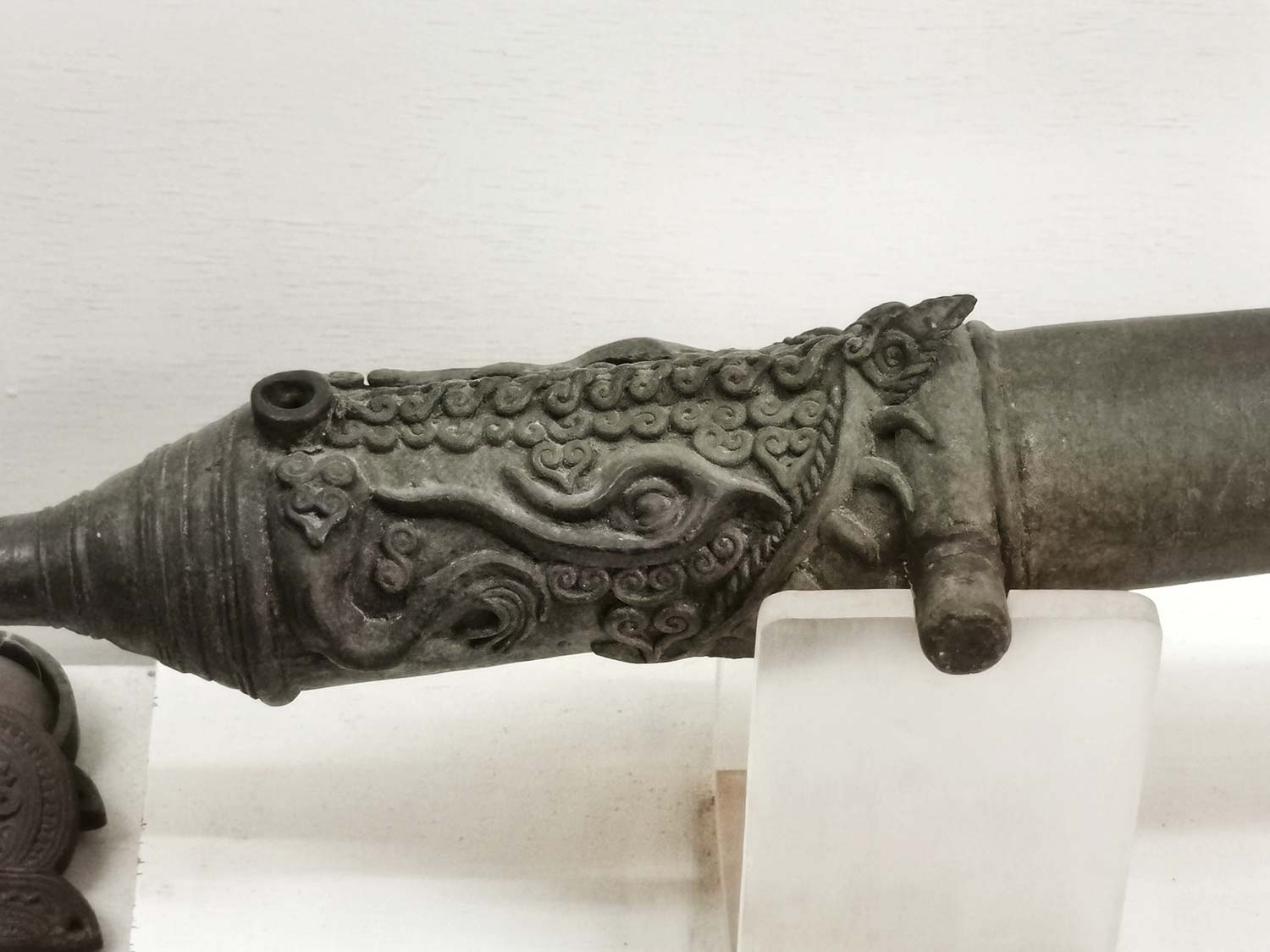 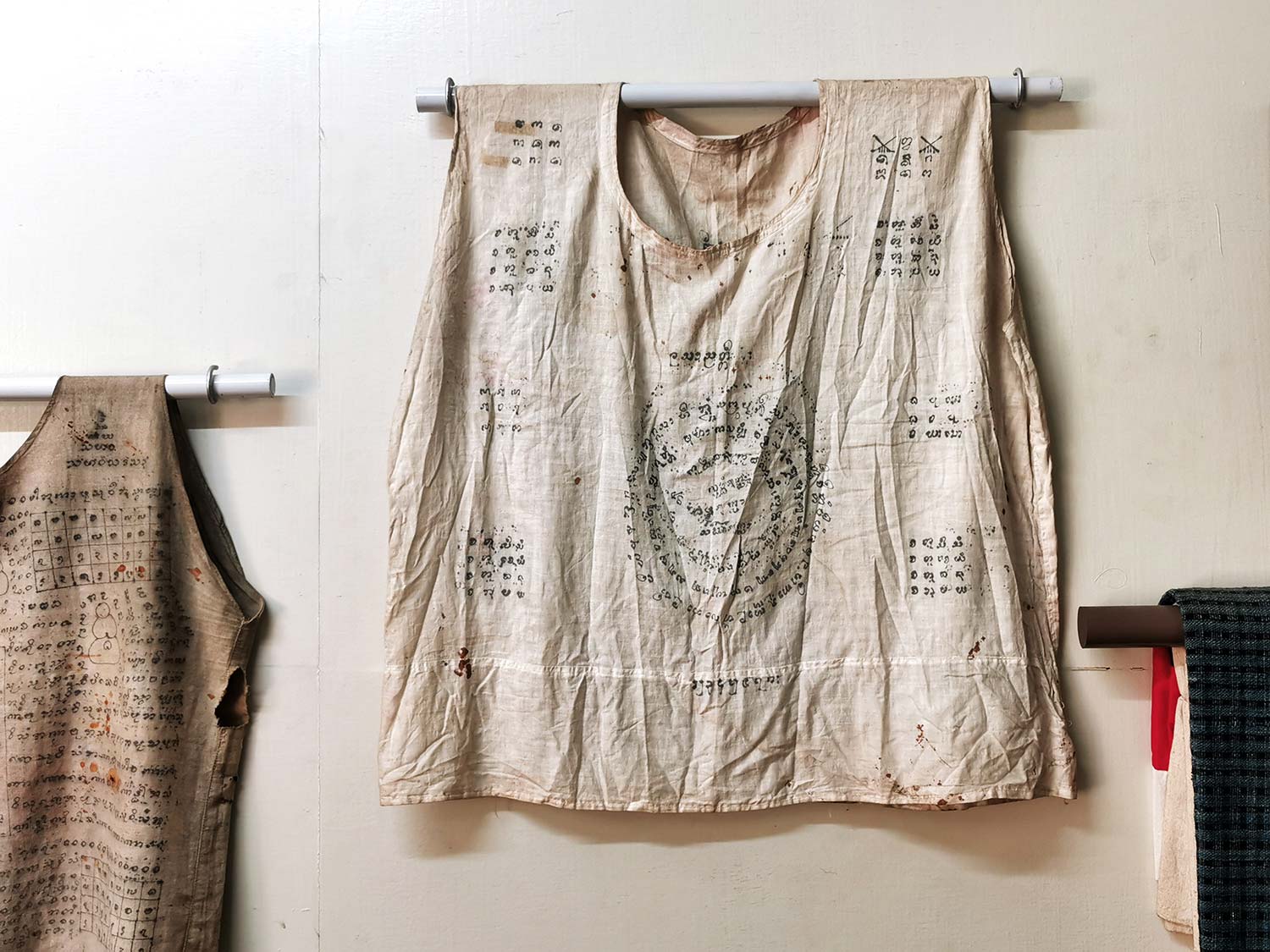 Weapons are made for fighting. However, despite their intended use, these antique killing tools were artfully crafted. The decorative pattern on this hand cannon, for example, is awesome. And look at that warrior vest adorned with yantra! I doubt if it could really protect the wearer. But for sure it must have given him a great morale boost. 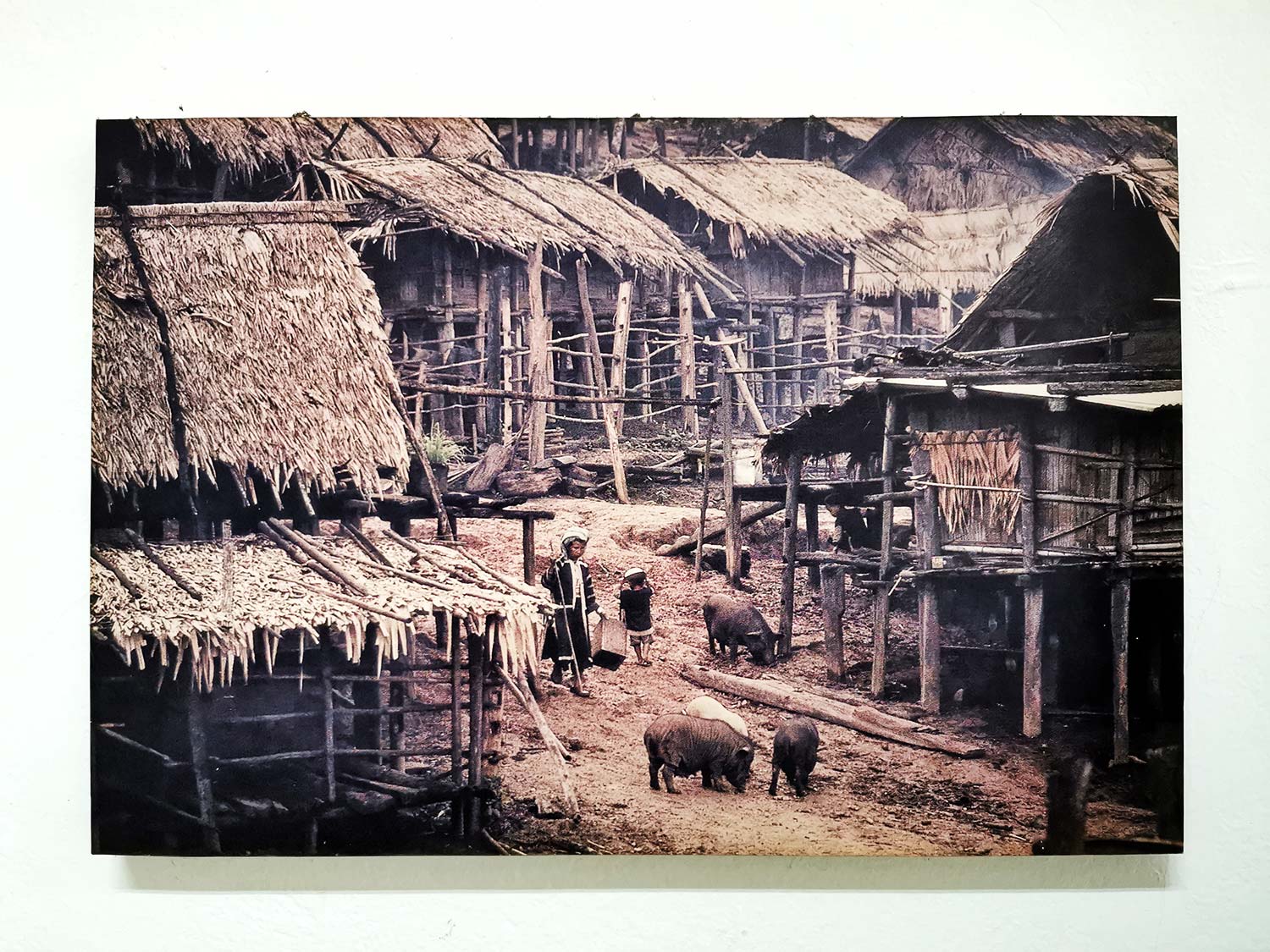 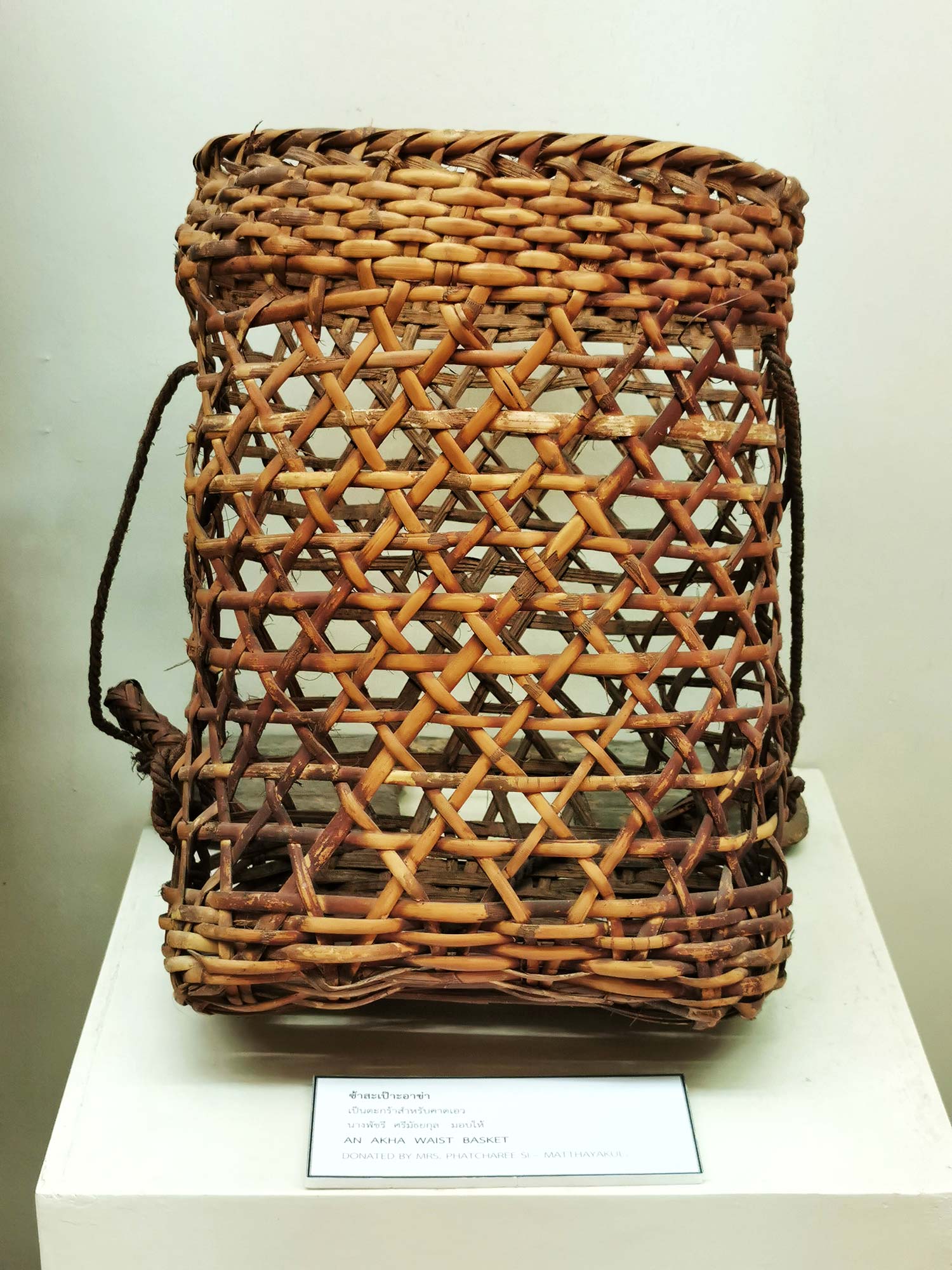 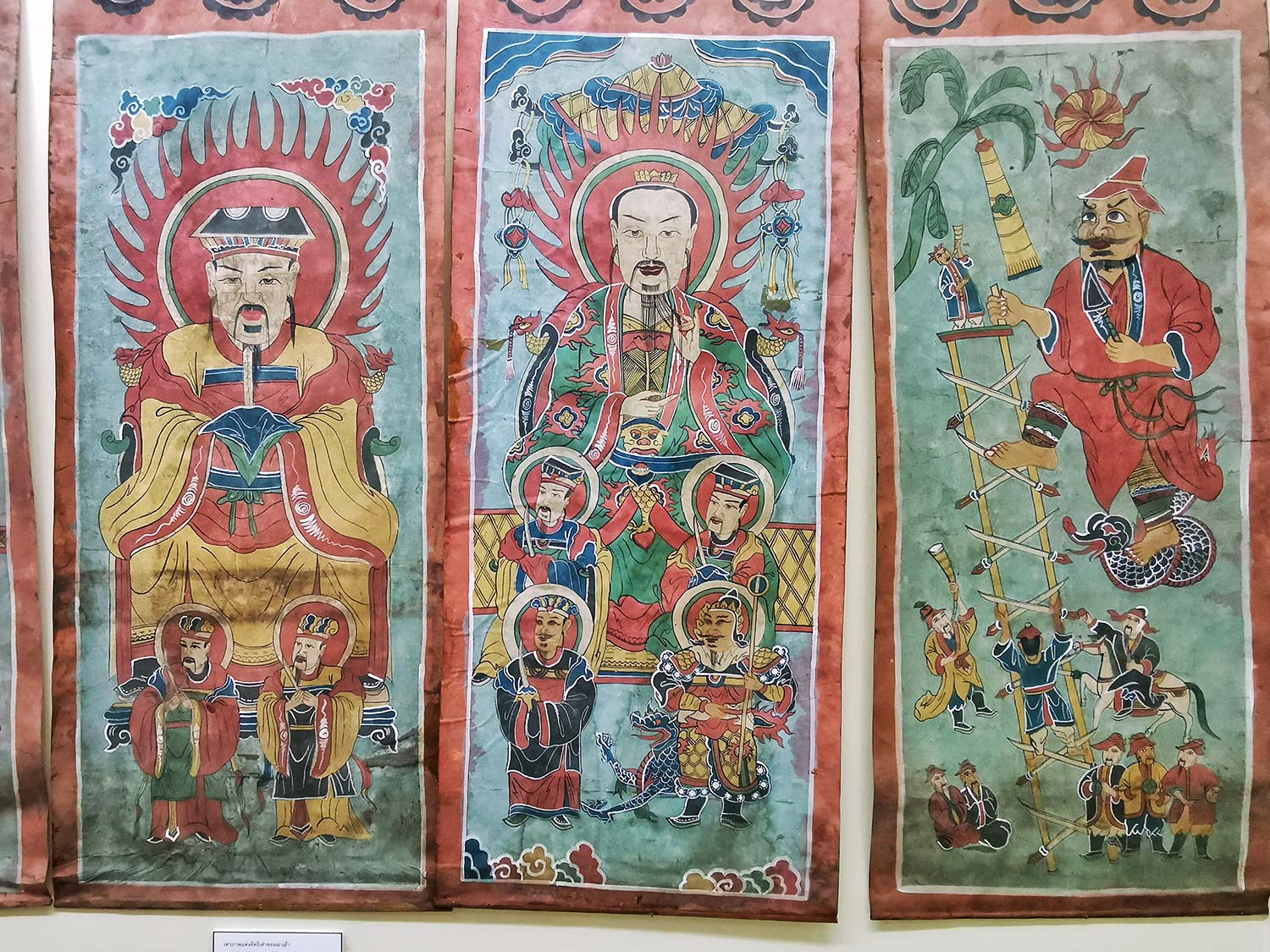 The present-day population of Chiang Rai is made up of people of various ethnic groups, from Tai Yan (the majority of the Lanna region) and Tai Lue to Akha, Yao and other hill tribes. In the part of the museum devoted to these people, you’ll find many interesting objects that reflect their beliefs, traditions and ways of life. 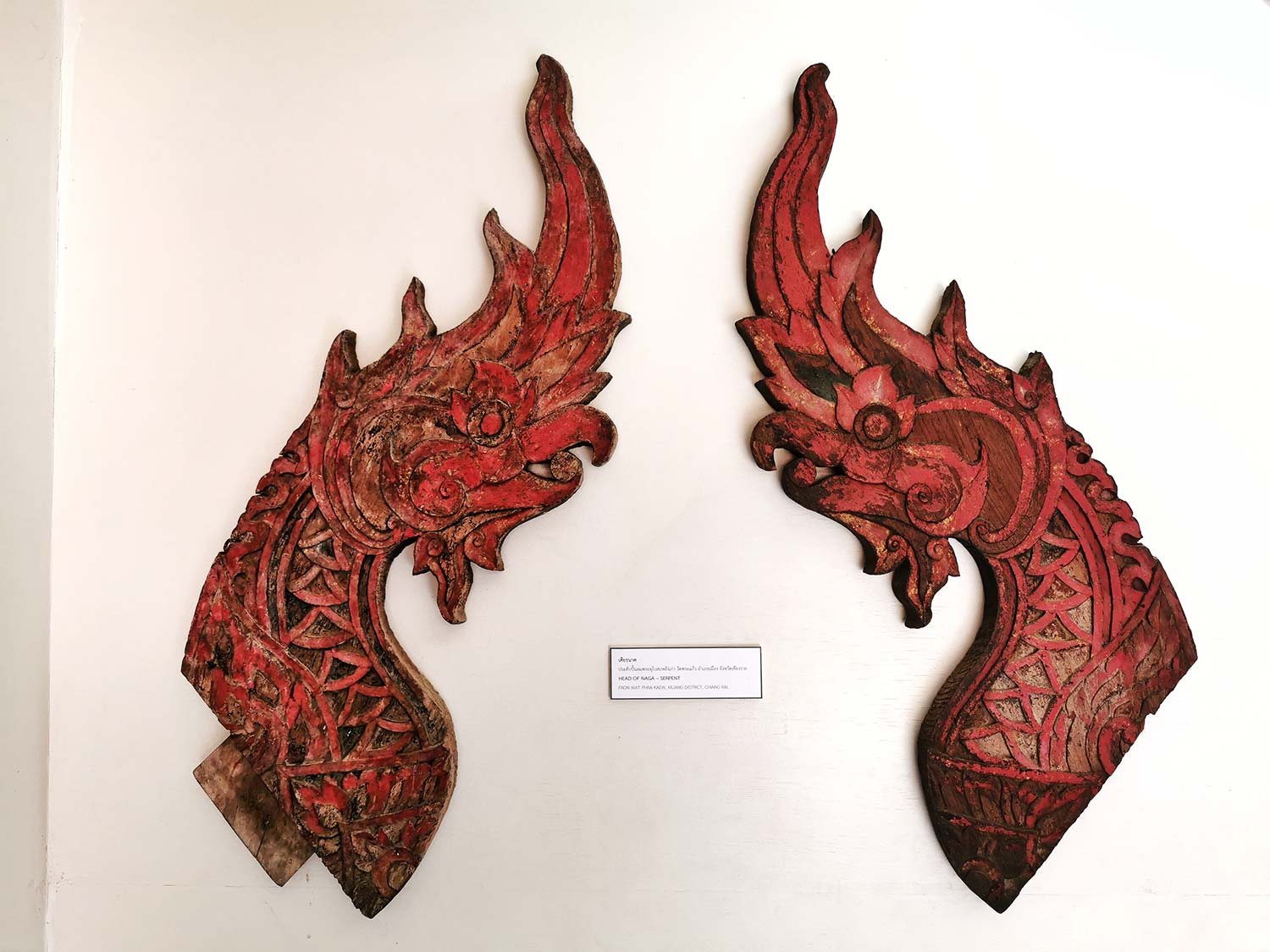 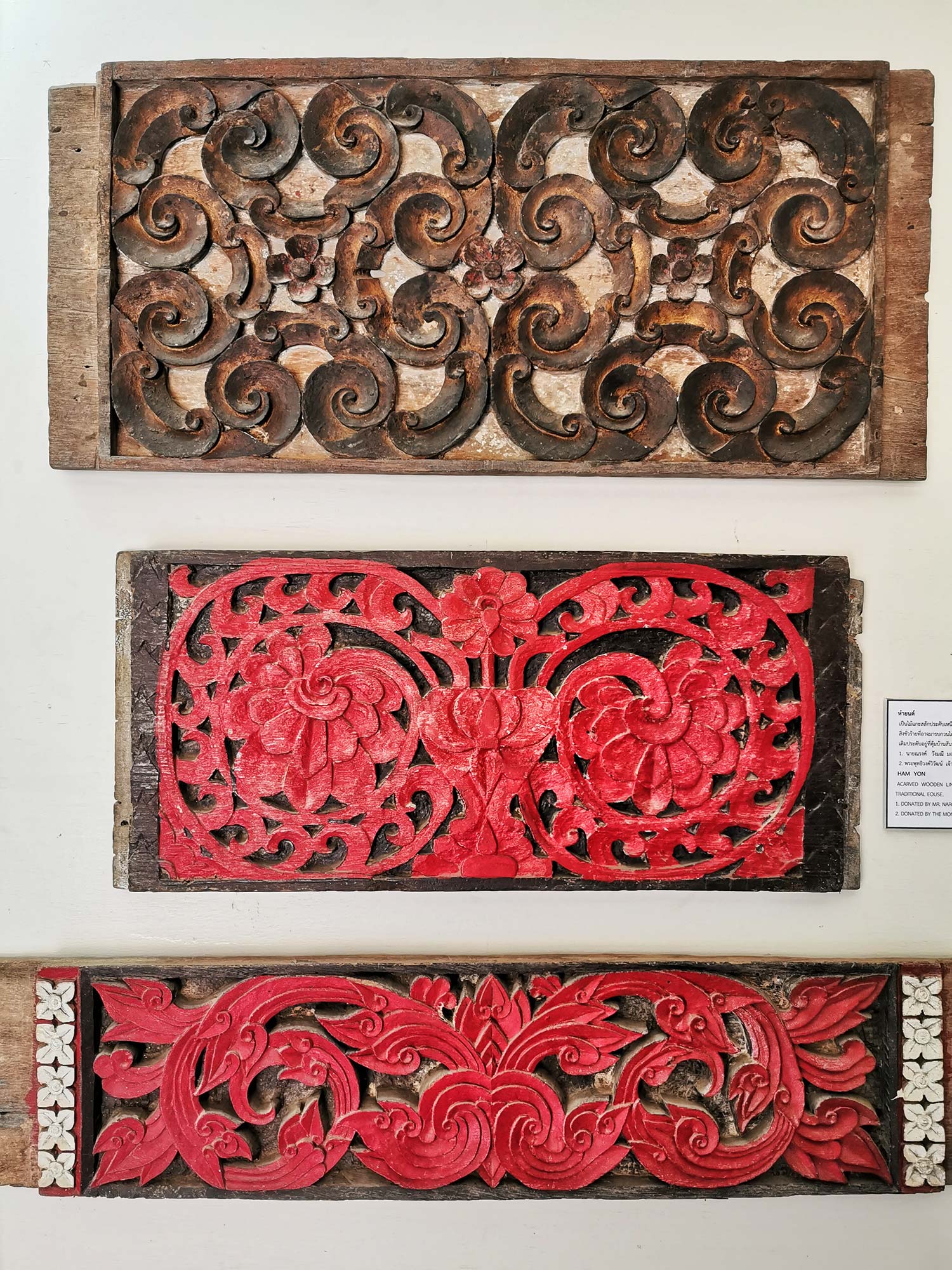 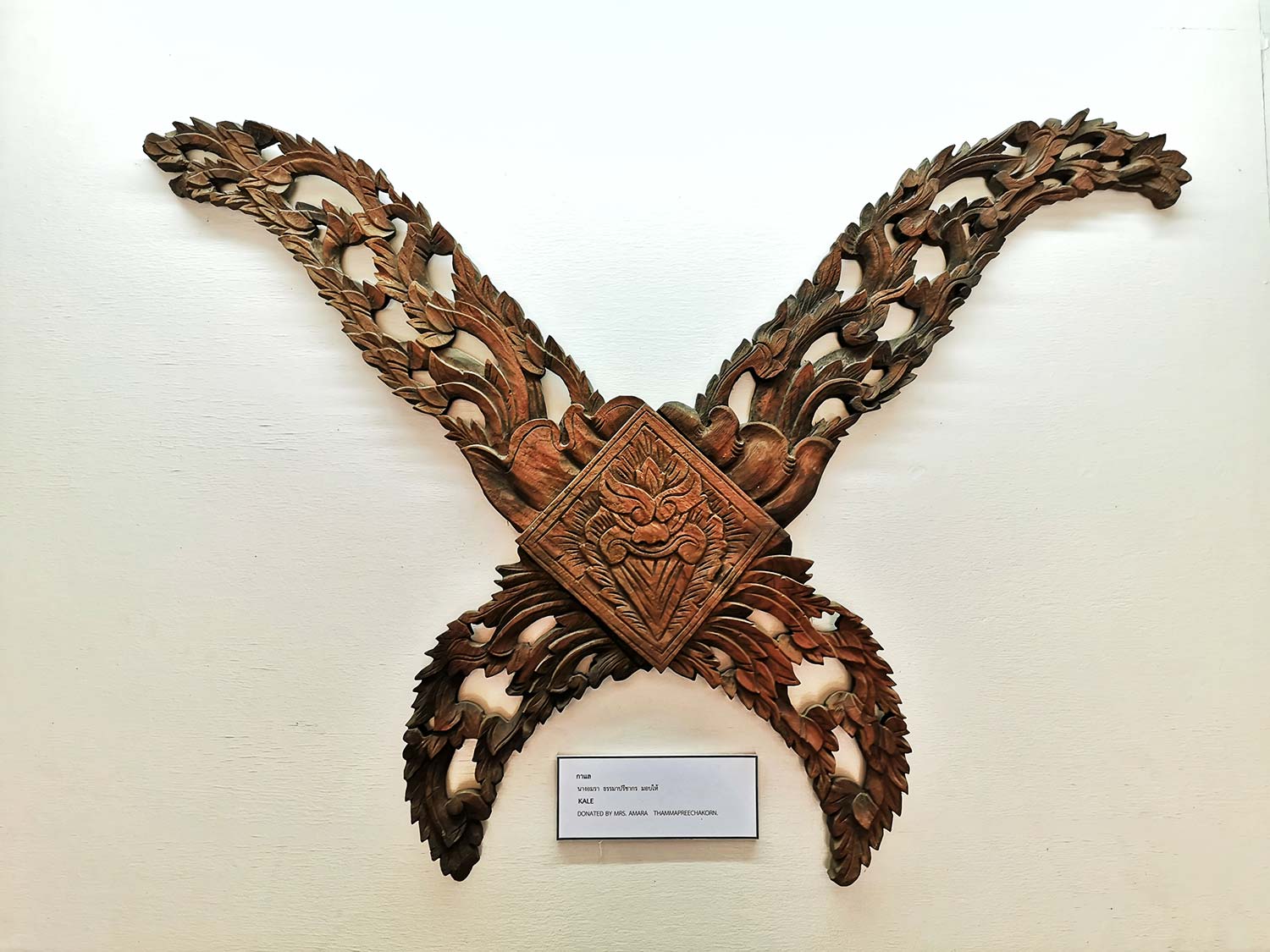 Many aspects of Lanna traditions can be learned at the museum, including architecture. Shown here are some elements of Lanna-style houses, namely kalae, which is commonly seen on top of the gable, and ham yon lintels made of carved wood. The naga heads were roof decorations from the old ordination hall of Wat Phra Kaew in Muang district. 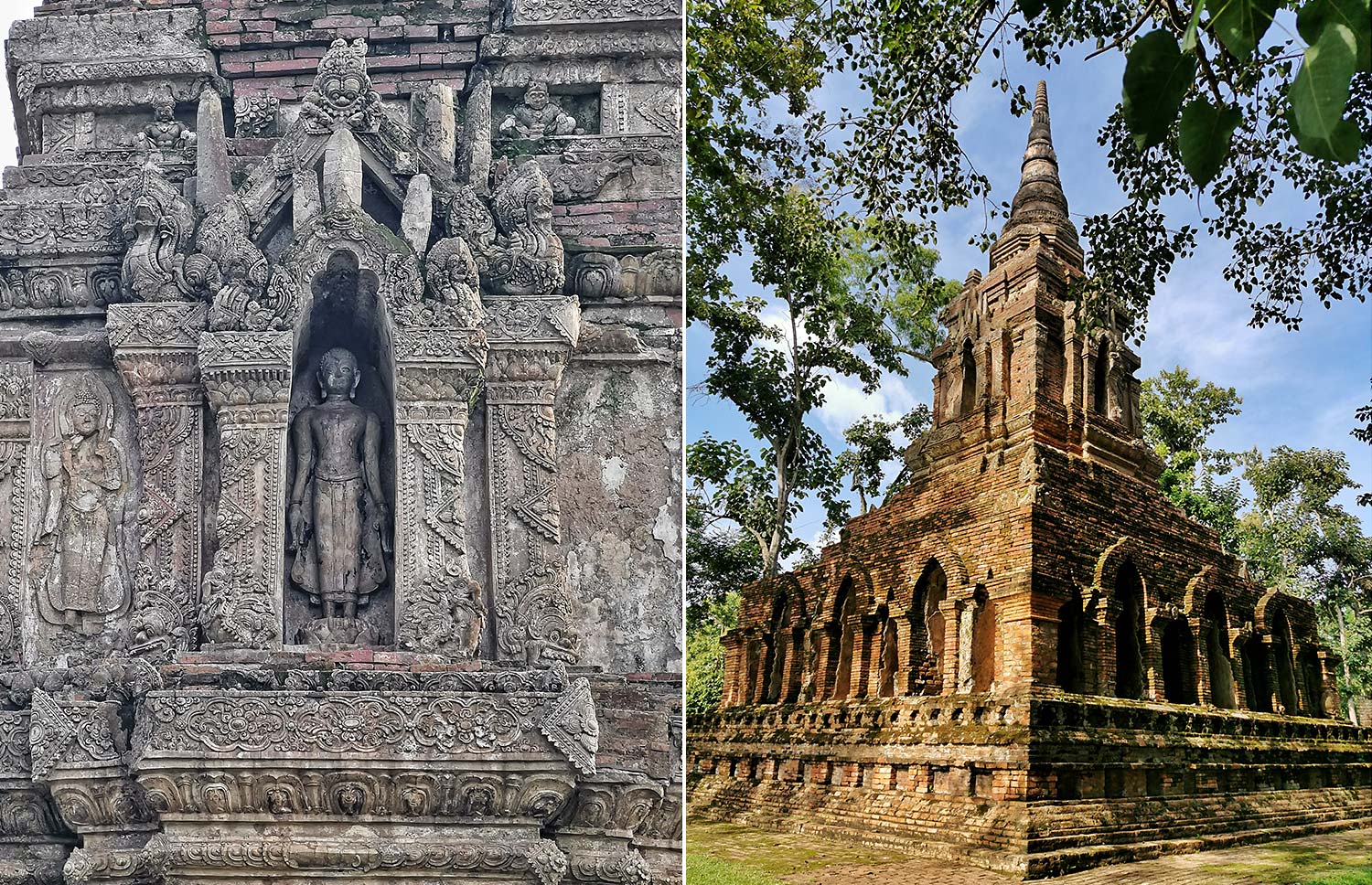 The ancient city of Chiang Saen has several old temples both within and outside its walls. For archaeologists and lovers of ancient art, Wat Pa Sak is the most beautiful. Built in 1340, during the times of Phya Saen Phu who made Chiang Saen the capital of Lanna during his reign instead of Chiang Mai as other kings of the Mang Rai Dynasty, the temple is celebrated for its beautiful principal stupa. Unsurprisingly, much of the elaborate stucco on the age-old monument has crumbled over time. Some of those fallen pieces are now on show at Chiang Saen National Museum a short stroll away. 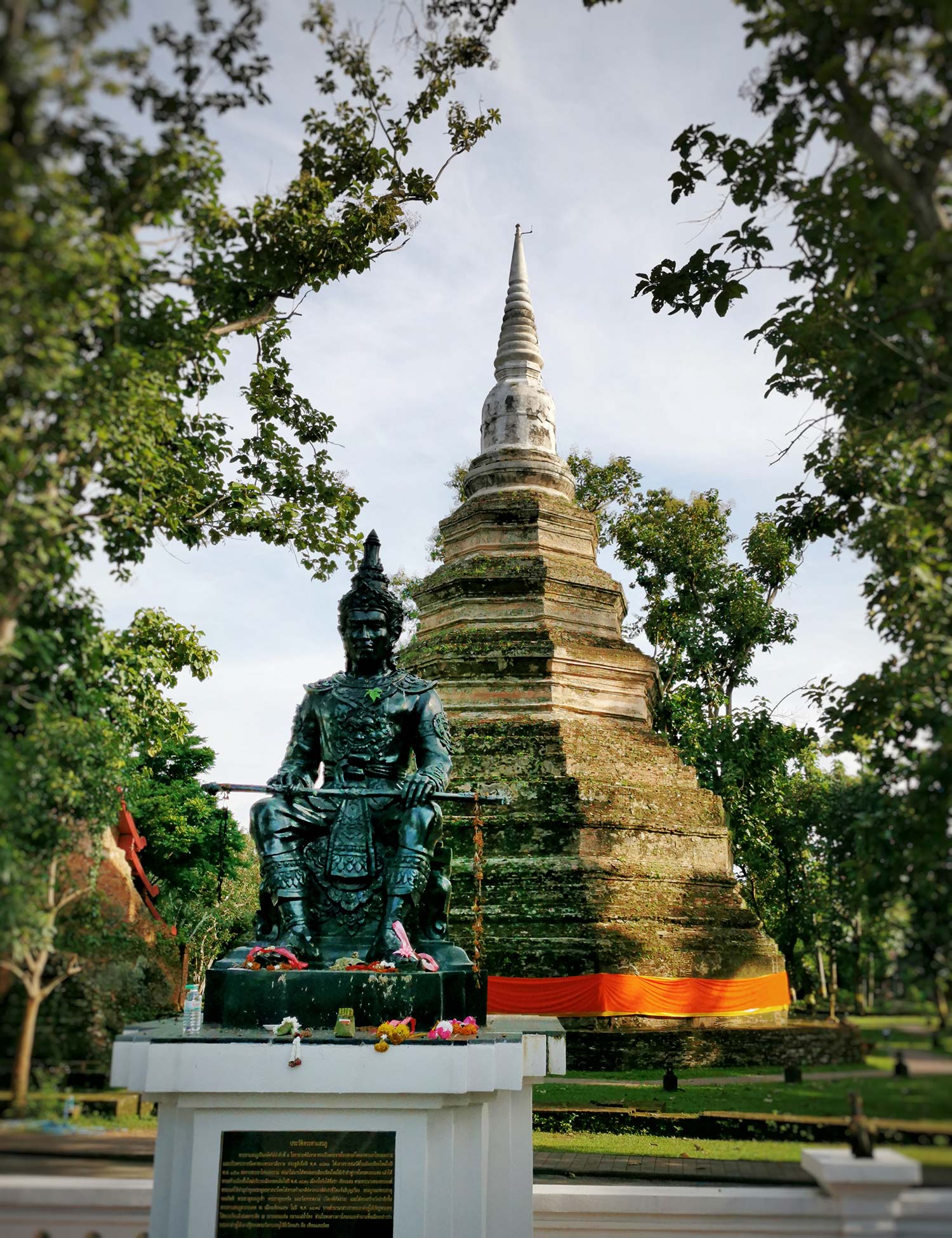 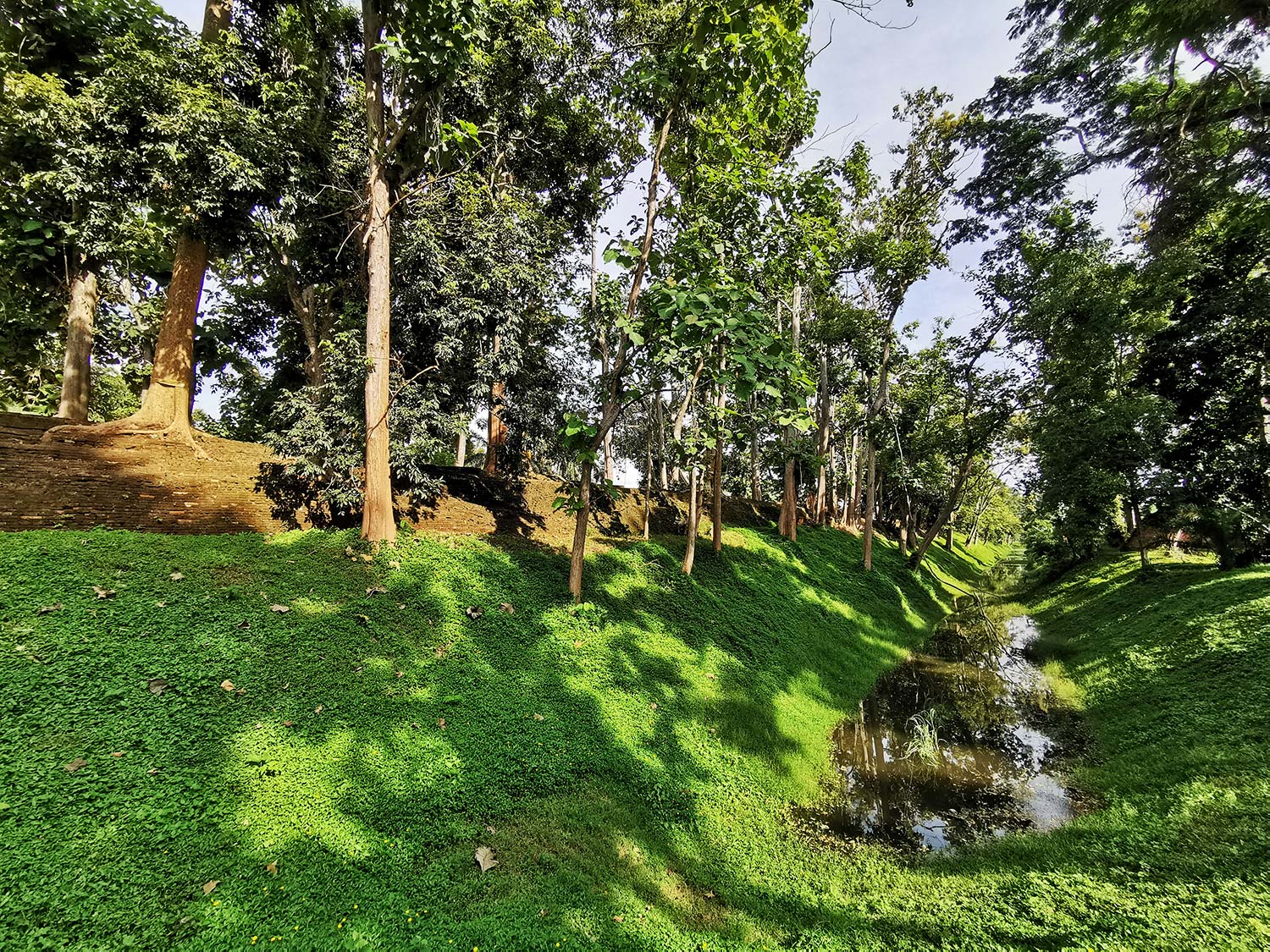 After the museum is closed, there is usually plenty of time before it gets dark. Wat Chedi Luang, the museum’s immediate neighbour to the east, is a place worth visiting. The temple is the location of the statue of Phya Saen Phu, Chiang Saen’s founder. Its pagoda is about the same age as that of Wat Pa Sak 200m or so further west but of a different Lanna style. On the way from the museum to Wat Pa Sak, you’ll have to walk through an old gate where you’ll find a section of the old city walls and moat.

The town of Chiang Saen is less than an hour's drive from Chiang Rai's Mae Fah Luang International Airport. Chiang Saen National Museum, located next to Wat Chedi Luang and a short walk from Wat Pa Sak, is easy to find in the small town. It is open Wednesday-Sunday, 8.30am-4.30pm. Please note it is not open on public holidays. For more information, call 053-777-102. 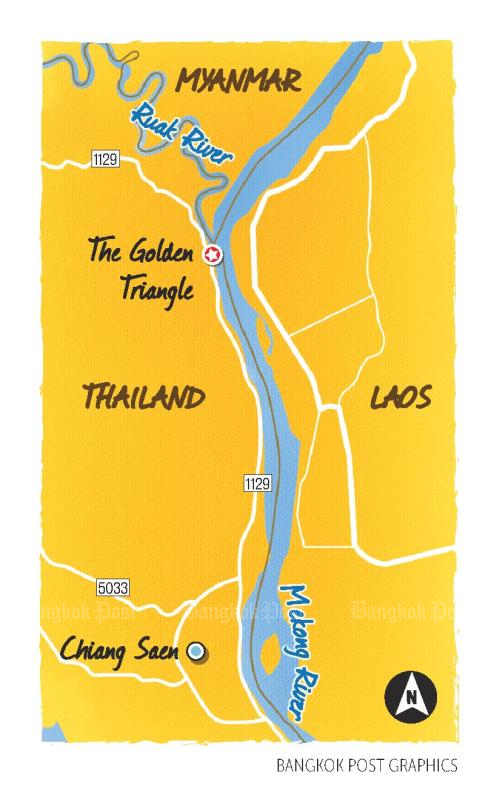 First trickle of tourists in October as curbs ease