Caught out in a virus world
Travel

Caught out in a virus world

Back in June, Thailand was again in the headlines when UK-based animal rights group World Animal Protection (WAP) released video footage showing a mahout using a bullhook to jab a two-year-old elephant to separate it from its mother. It wasn't a new tactic, but it infuriated people on social media.

For more than three decades, elephants have played a major role in Thailand's tourism industry and generated an income of up to 6 billion baht per year. Elephant camps across the country have become a powerful magnet, drawing foreign tourists to enjoy a riding experience and appreciate the charm of Thai culture.

However, such tourism is not appreciated by conscious travellers. In recent years, travel agents in Europe have done away with elephant camp programmes from their itineraries as they attempt to raise awareness about animal abuse, especially since bullhooks and chains have been essential tools to train elephants. Recently, things have gone from bad to worse for the country's tourism sector, including elephant camps, as a result of the novel coronavirus outbreak. This dire situation has led authorities and camp owners to mull over elephant care tourism and how to restore the country's image.

Focusing on animal welfare, the Tourism Authority of Thailand (TAT) is working with the Department of Livestock Development, veterinarians and elephant experts to seek a solution in enhancing the standards of elephant camps and mahouts around the country. It started by arranging a series of seminars and workshops to educate people about the difference between domesticated and wild elephants, as well as local wisdom that has been passed down from generation to generation.

"About 70% to 90% of foreign tourists come to Thailand to have experiences with elephants. It's different from South Africa where not everyone will see elephants in a safari. Today, most camps have improved their standards of elephant welfare but we have noticed that some try to create fake rumours to discredit others. This gives birth to criticism and ruins the country's image as Thailand has never taken any action to clarify what is true and what is fake," said Srisuda Wanapinyosak, deputy governor of international marketing for Europe, Africa, the Middle East and the Americas at TAT.

"The elephant is our national animal and we have expertise in providing medical treatment to them. Last year, we hosted a seminar at the World Travel Mart in London in which counsellors and representatives from the People for the Ethical Treatment of Animals and Association of British Travel Agents could discuss problems with vets and experts from the Thai Elephant Alliance Association. We discovered that while 90% of participants had never been to Thailand, they already hated our country after getting wrong information from social media. Upon returning home, we organised trips for more than 20 writers and travel agents from the US, Canada, Switzerland, England and Netherlands to explore several elephant camps and their feedback was positive. Their attitudes changed after they spent time talking to mahouts and vets."

Back in 1989, the government enacted legislation to ban logging in the jungle, resulting in mahouts becoming unemployed. Every day, elephants need 200 to 300kg of fruits and grass, so they shifted their focus to elephant shows or took them to the city in order to earn a living. Today, there are 4,200 domesticated elephants and most of them have none of the skills required to survive in the forest as elephants live in a group and won't accept strangers. 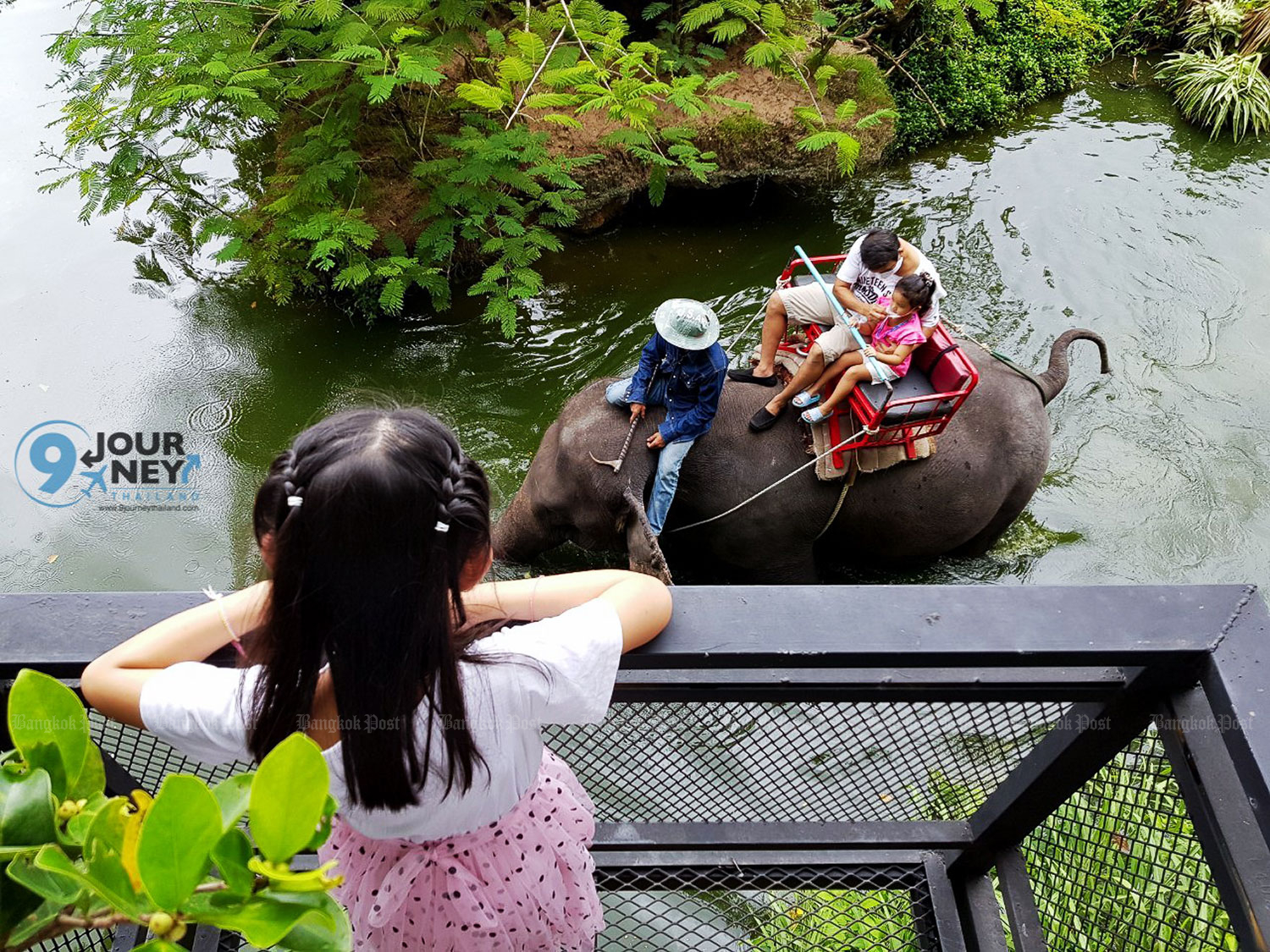 "Domesticated and wild elephants have the same DNA but their behaviour is different. We've released just 108 elephants back to the jungle because some can't live in nature," said Asst Prof Chatchot Thitaram, head of the Center of Excellence in Elephant and Wildlife Research at Chiang Mai University.

"The increasing number of wild elephants is a result of legislation passed in 1992 in which the Department of National Parks, Wildlife and Plant Conservation revoked the right to expand the forest area. Thailand has between 3,000 to 3,500 wild elephants that can be divided into seven groups living in different areas like Khao Yai and Kui Buri."

Sittidet Mahasawangkul, chief adviser at the Thai Elephant Conservation Center, has indicated that training elephants can help reduce the risk of accidents while a veterinarian can provide medical treatment for sick mammals.

"Like humans, domesticated baby elephants will go to school and learn how to live with people in harmony. The bullhooks are normally used to control the animals in an emergency in which mahouts will tap the elephants, not beat or jab aimlessly. An untrained wild pachyderm will attack people or vandalise when it is mad. Thailand has 4,200 housed elephants and only 1-2% might be trained cruelly," said Sittidet.

"People should realise that no animals were ever born in a home. Every creature from a cat, dog or horse came from the jungle. The Buddhist belief has a 3,000-year-old tradition of using elephants. In Thailand, we had domesticated elephants by the Sukhothai period and the animals have become an integral part of Thai culture. In fact, it's like horse polo and bullfighting in Western culture."

Like other businesses, elephant camps have been affected by the Covid-19 pandemic. As a result, some mahouts and their elephants have had to return home due to a dramatic decrease in the number of tourists.

In Ayutthaya, the Royal Elephant Kraal Village recently resumed its elephant taxi service and opened its doors to local tourists to feed 80 elephants. Run by the Phra Kochabaan Foundation, it also offers the Elephantstay programmes, which gives visitors the opportunity to enjoy the accommodation, learn the basics of being a mahout, and take a bath with elephants. 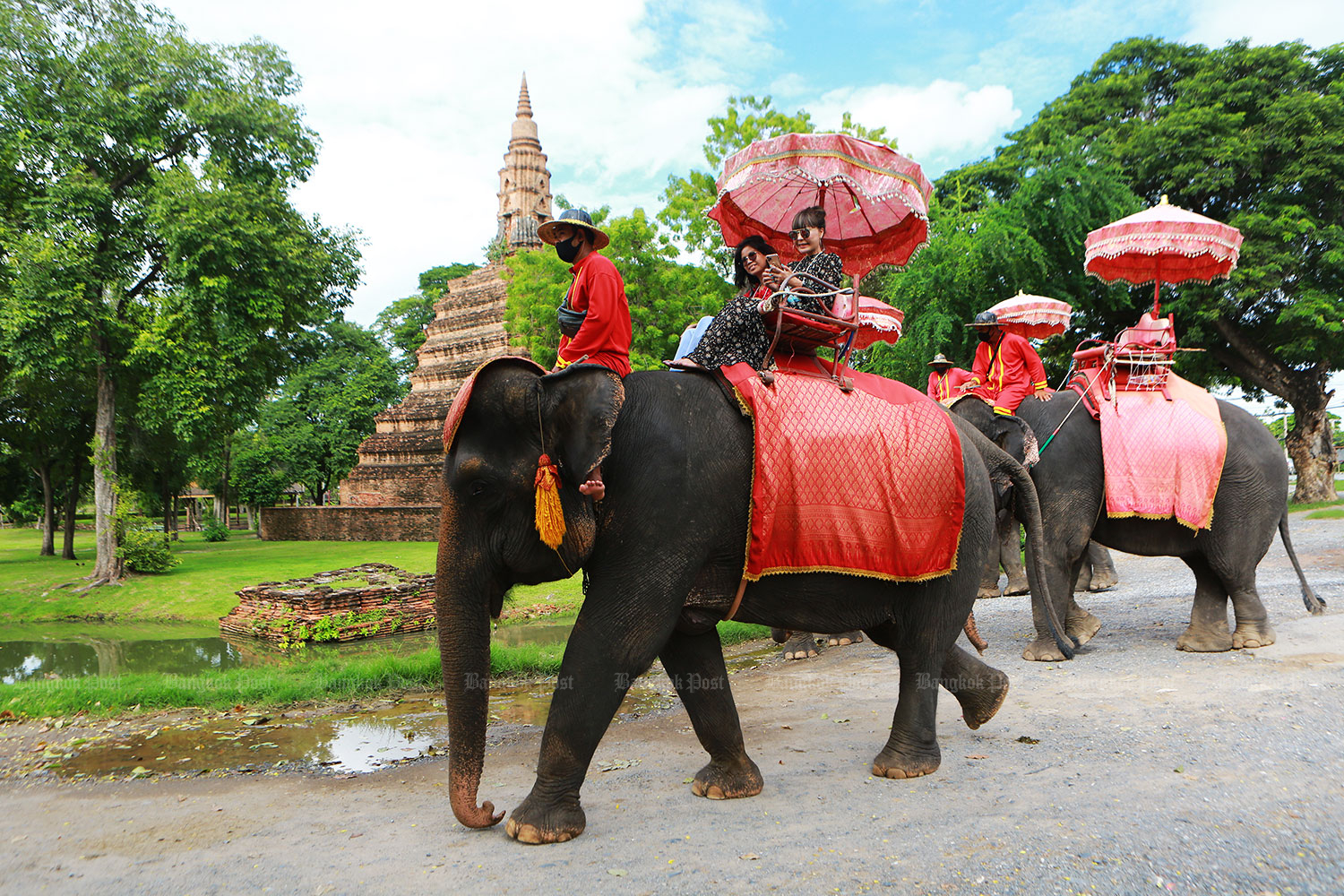 "The Ayutthaya Historical Park was added to the list of Unesco World Heritage Sites in 1991 and one of their conditions was that the park must maintain the way of life of the elephant, the other was to offer the ancient transportation service. That is why we set up elephant taxi services, which have been popular with Japanese and Taiwanese tourists. They feel excited to ride an elephant while exploring history. This is the face of tourism now. The foundation owns 180 elephants currently -- 80 live in the Royal Elephant Kraal Village and 100 work at several elephant camps around the country. All these elephants once roamed the city streets," said Ittipan Kharwlamai, secretary of the Phra Kochabaan Foundation.

"The foundation aims to help mahouts earn an income and provide better welfare for elephants. Each month, we pay 45,000 baht to provide food and medical supplies to the animal while each mahout receives 15,000 baht."

Here, three-year-old elephants become separated from their mothers and spend three months learning to live with humans and how to greet, kiss, hug and shake hands for elephant shows. Conducted by veteran mahouts, a programme of taxi training courses is reserved for 15-year-old mammals, depending on their behaviour and physical structure.

"The Covid-19 crisis has made us look at local travellers and find new ways to present elephants to promote domestic tourism. We plan to build an elephant sanctuary to meet the growing demand. Elephant taxi services help us generate income and it helps elephants get exercise. All activities are conducted by skilful mahouts to ensure tourists' safety," Ittipan said.

In August, the Pattaya Elephant Village transformed some of its space into the Mong Chang Cafe, which drew a big crowd of families and young travellers in an exotic safari-type environment. The project is the brainchild of Purimprud Chaiyakham to help her family business survive amid the downturn.

Established in 1973, the camp is designed to resemble a forest in which 20 elephants and a flock of sheep, goat, deer and gibbon can live together. At the new cafe, visitors can sip coffee and enjoy desserts while watching elephants from the terrace. There's also a stage for safari-themed cabaret shows and a corner for Thai massage.

"We are experiencing a financial crisis. We had no income when the country went into lockdown and our camp was closed for three months. We launched an online tour on Facebook where people could pay to feed elephants and other animals. We have to adapt ourselves to the situation while educating people about wildlife at the same time," Purimprud said.

"An elephant weighs 5 tonnes and can carry 500kg. Visitors can register to ride them and observe their daily activities. Elephants need 200kg of food and 200kg of water, so they need to walk and have routine exercise. We have traditions and methods to take care of them. Moreover, following an eco-friendly concept, we've banned single-use plastic bags."

Meanwhile, TAT has poured some 13.9 million baht into the project "Chuay Chumchon Chuay Chang Chuay Chat" (Help Communities, Help Elephants and Help the Country), with a goal to support elephants, mahouts and farmers affected by the Covid-19 pandemic.

"Around 109 camps with 1,545 elephants have enrolled in the project. We paid 9,500 baht for one elephant and the mahouts had to order food like napier grass, sugar cane, banana and pineapple from local farmers. It was dry season and elephants couldn't graze on the lands as the camps had zero income. This was another way to help the elephant communities during the crisis," Srisuda said.

"In order to spur domestic tourism, we plan to create educational programmes for students and local folks in arranging a day trip to an elephant camp. They can learn about elephants through fun activities like an elephant spa. We're Thai, so we understand elephants better."