The navel of the Mekong
Travel

The navel of the Mekong

From naga fireballs to whale-shaped rock formations at Hin Sam Wan, the province of Bueng Kan along the Lao border is full of awe-inspiring tourist attractions

The partly cloudy sky gradually turned orange and red after sunset. The twilight colours, which reflected on the Mekong River, provided a great contrast to the dark green mountain ranges in Laos and grass dotted with white flowers on the bank of the river in Thailand's Bueng Kan province.

The scenic view brought peace of mind to visitors including me who stood on the riverbank at Wat Ahong Silawat in Muang district.

Locals believe that the temple is located next to the deepest pool of water in the lower Mekong basin. The current in this area forms a slow whirlpool, leading to the belief that it is the navel of the river where Phaya Nak, or Naga, the serpent-like semi-divine creature, resides.

"I bring my family to see naga fireballs here every year because the temple is not far from our home. Some years, we are lucky to see many fireballs while at other times, we barely see a few. It depends on luck," said a local. 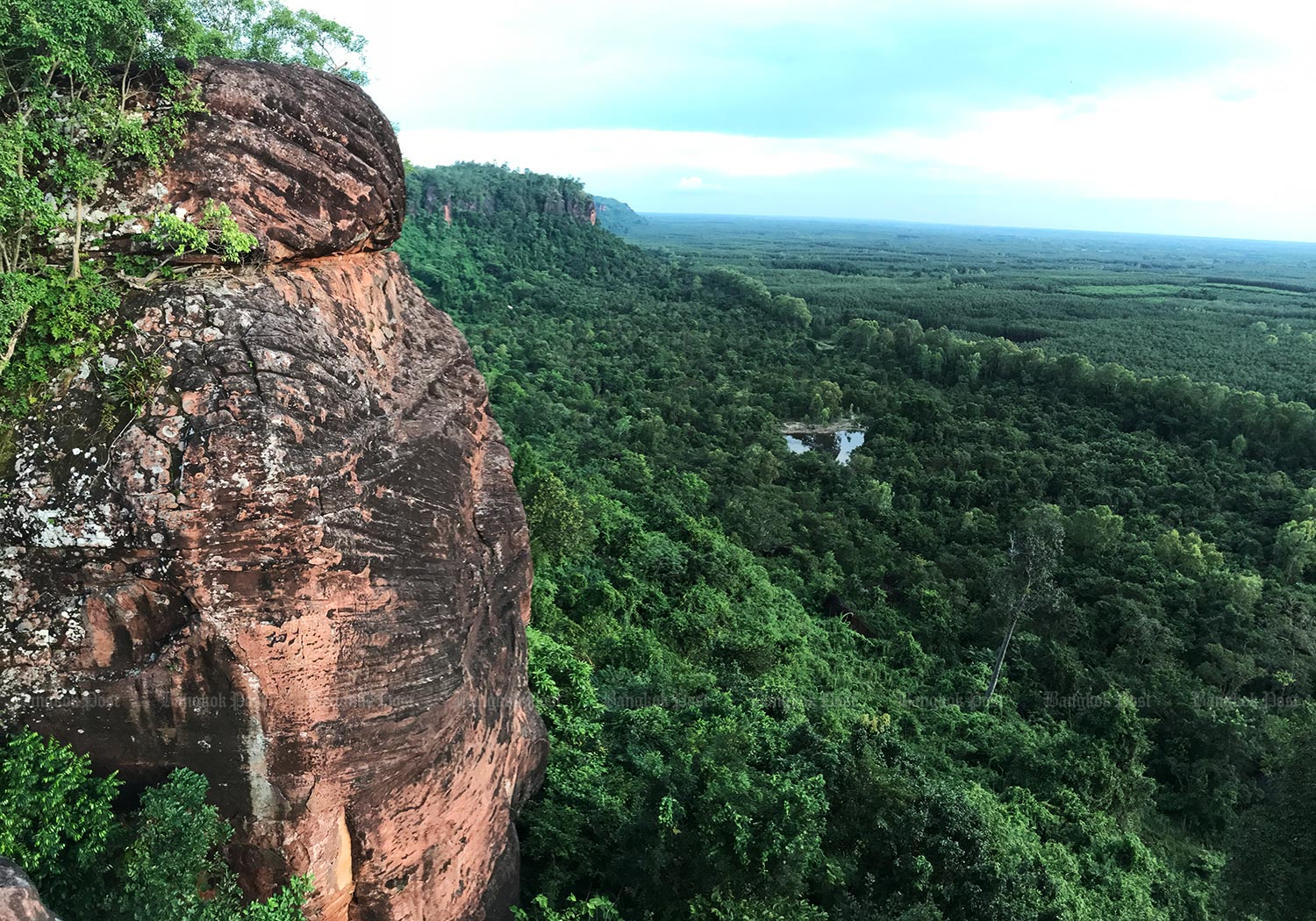 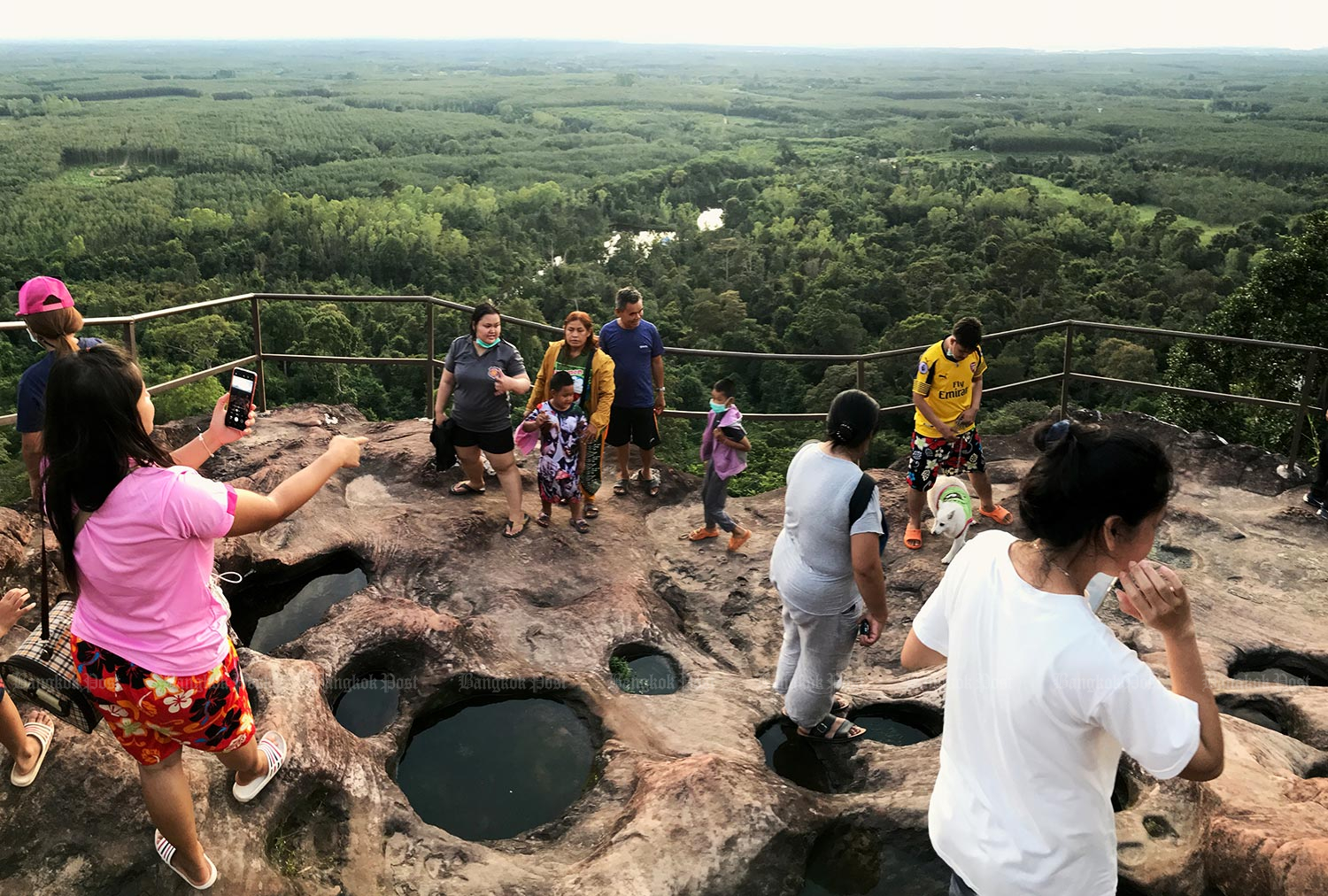 Sang Roi Bo is the name of this place. Sang means ponds in the Isan dialect and as the name suggests, the site features many puddles including a pond in which the water has never run dry. Sang Roi Bo is one of the famous stops for tourists who visit Hin Sam Wan. 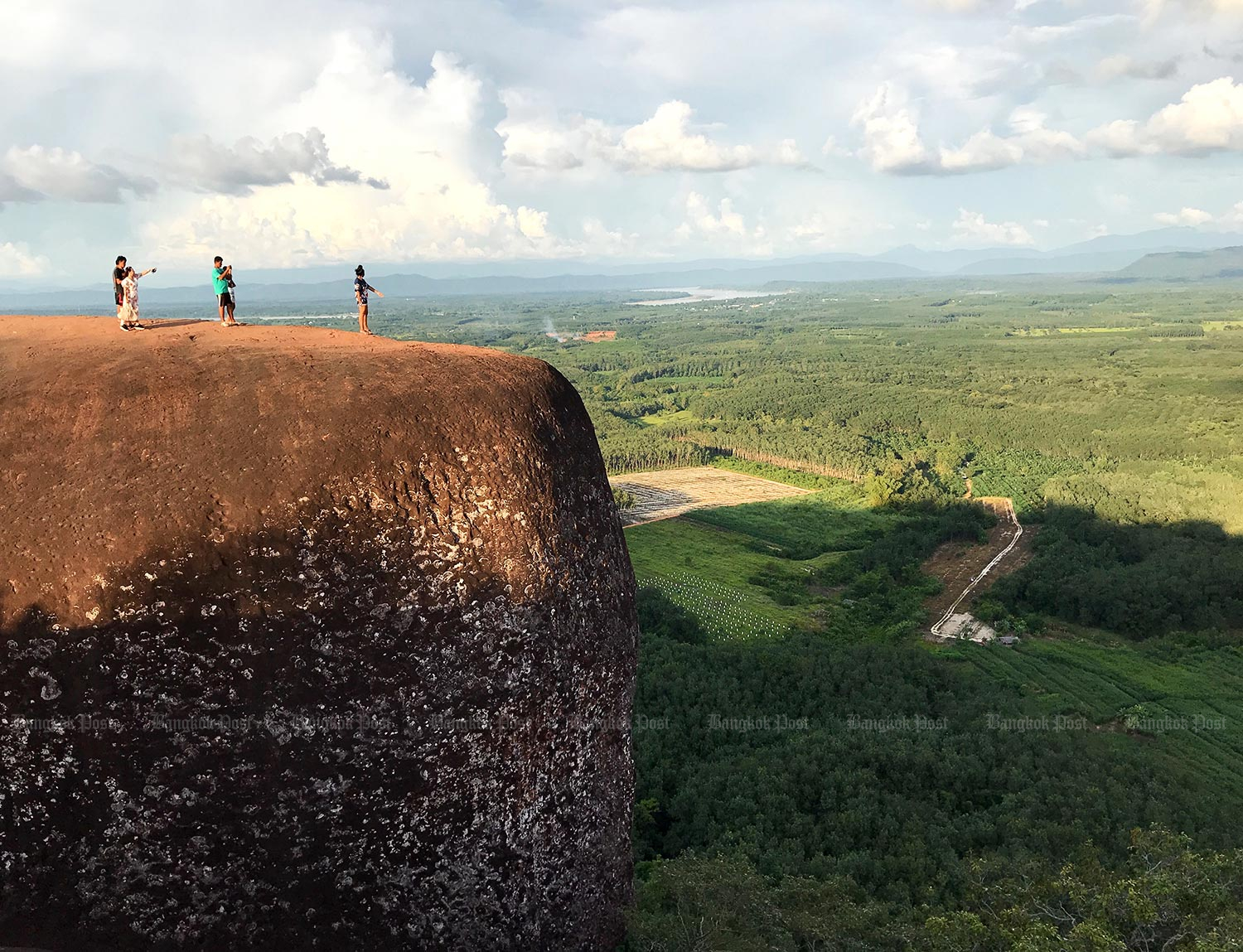 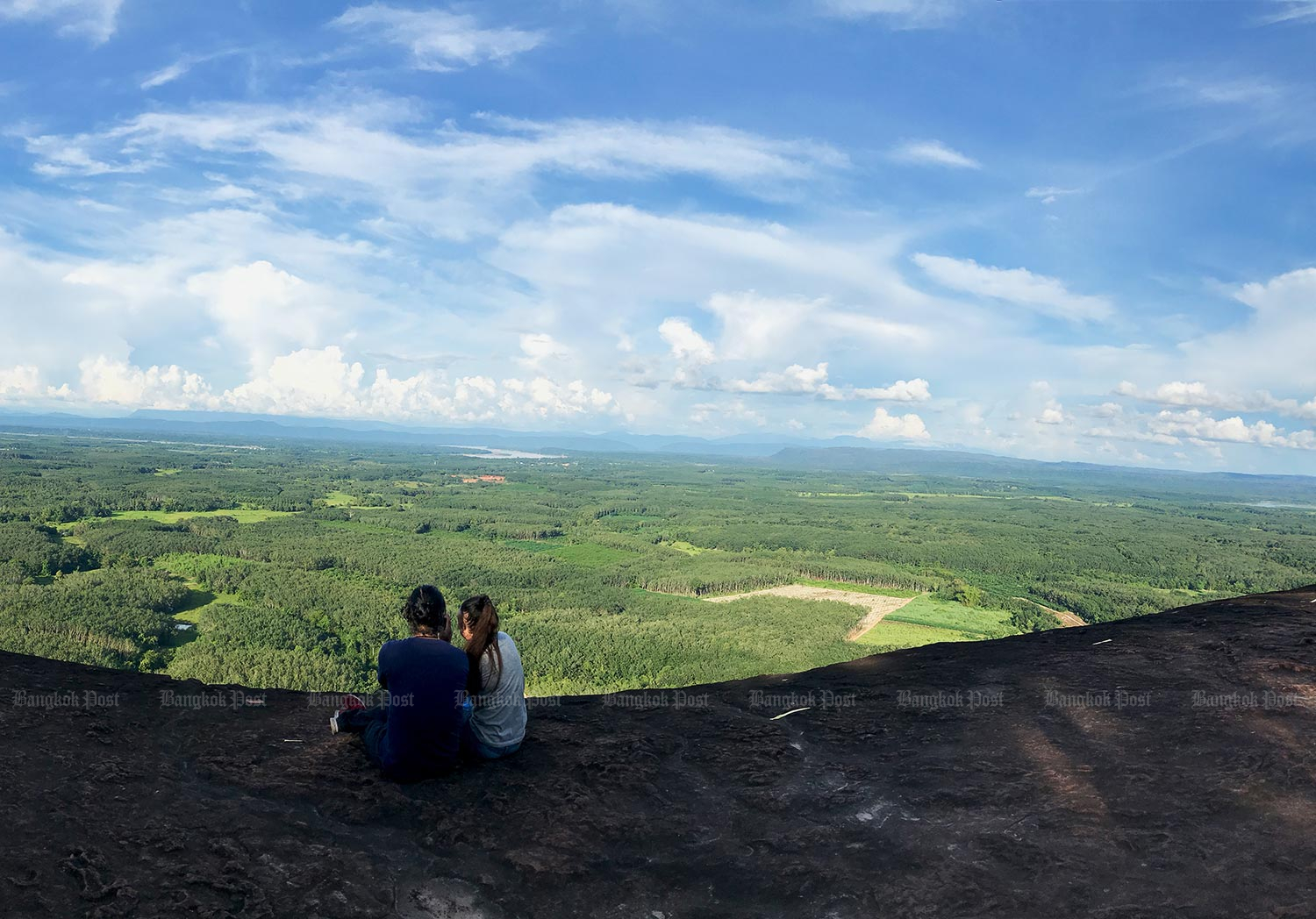 People look tiny when compared to the size of the whale rocks at Hin Sam Wan. The place is also a popular spot for visitors to see the sunrise. Since there is no fence near the edge, tourists need to be careful when they walk past others, especially a large group of visitors. The hot photo spot is at the tip of the cliff where visitors queue up for a chance to take pictures and observe the view below. 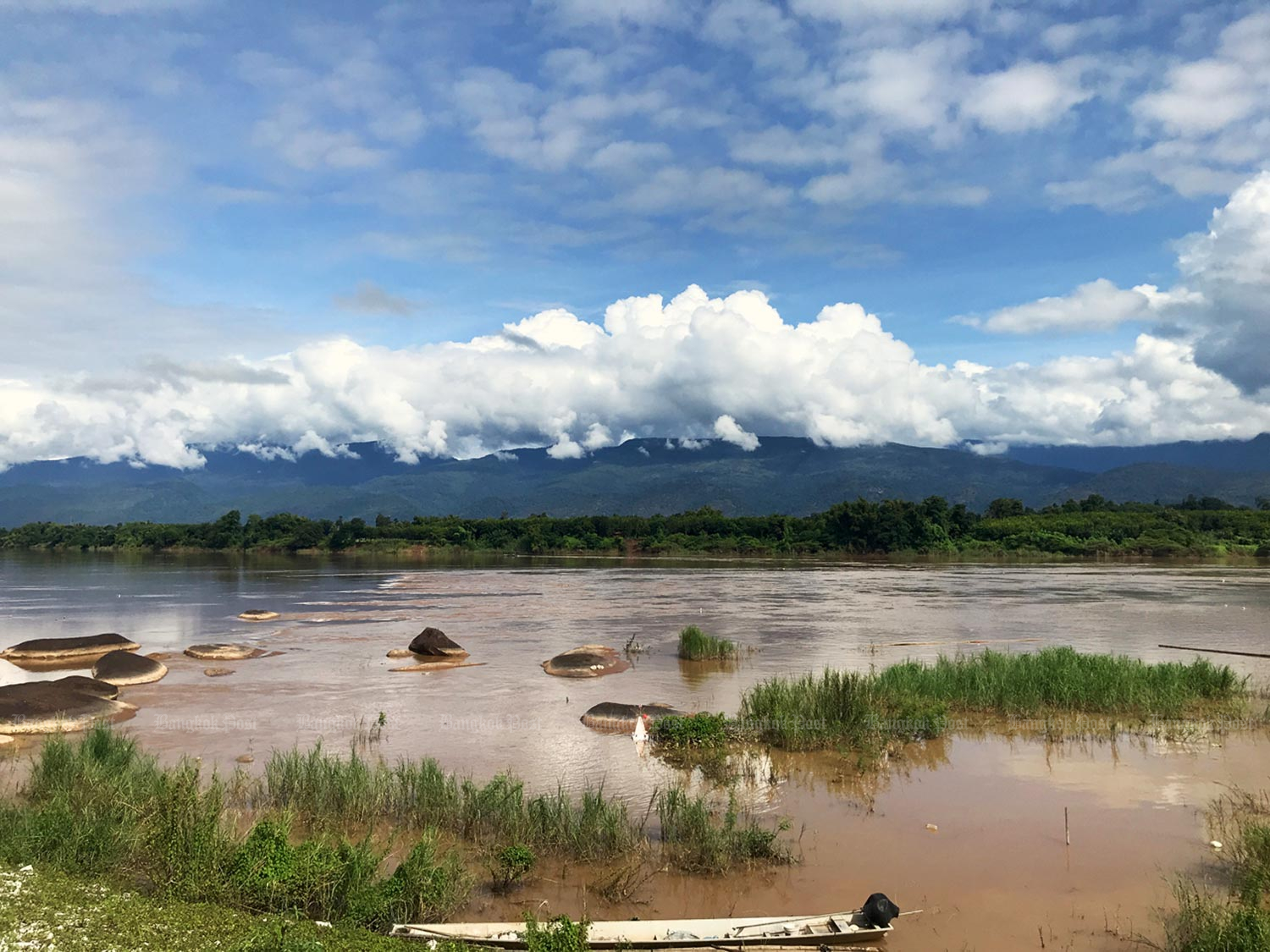 A small fishing boat is seen passing Kaeng Ahong along the border of Laos. The viewpoint is located not far from Wat Ahong Silawat, a popular spot where locals come to pay respect to phaya naga. 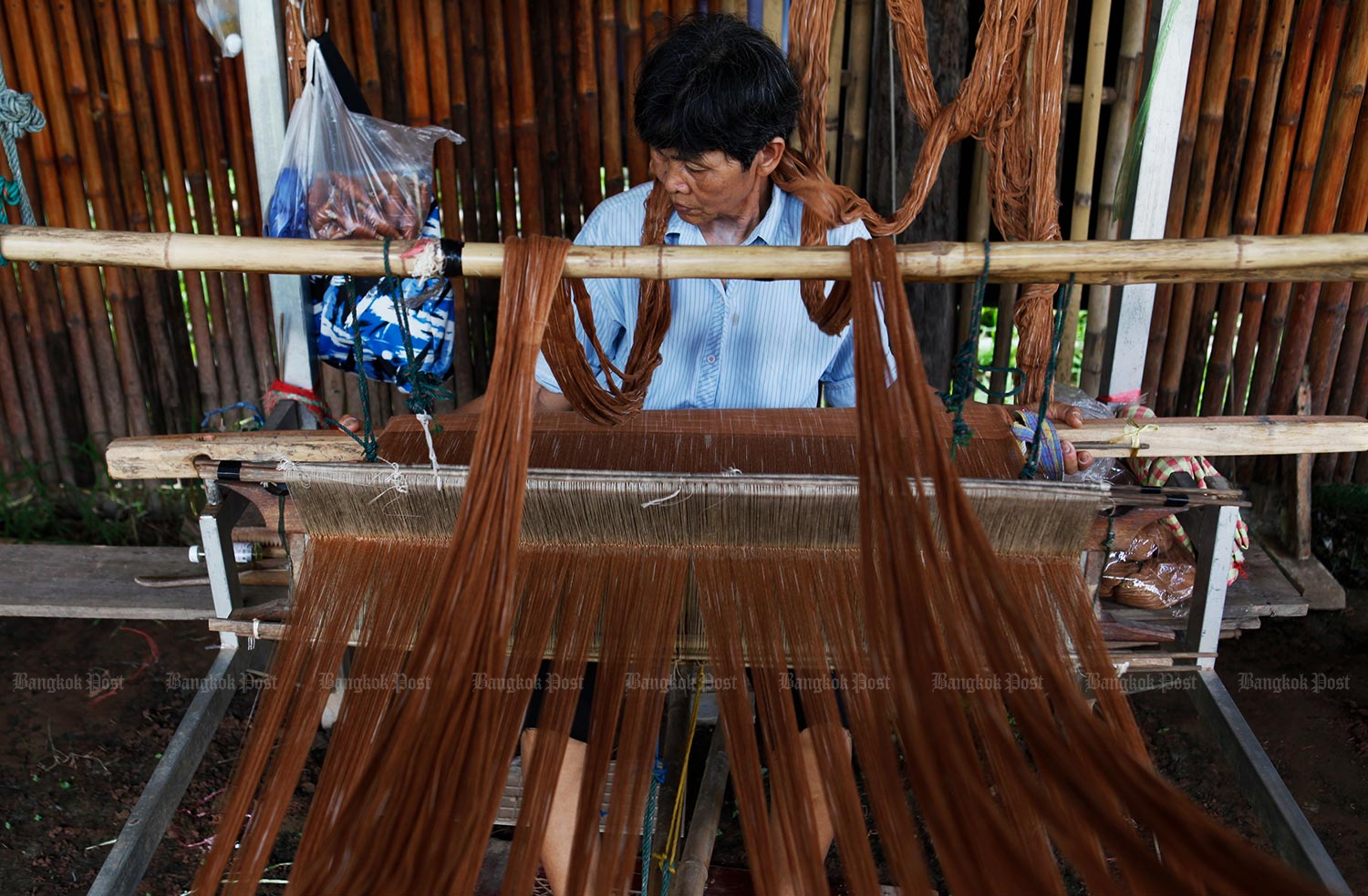 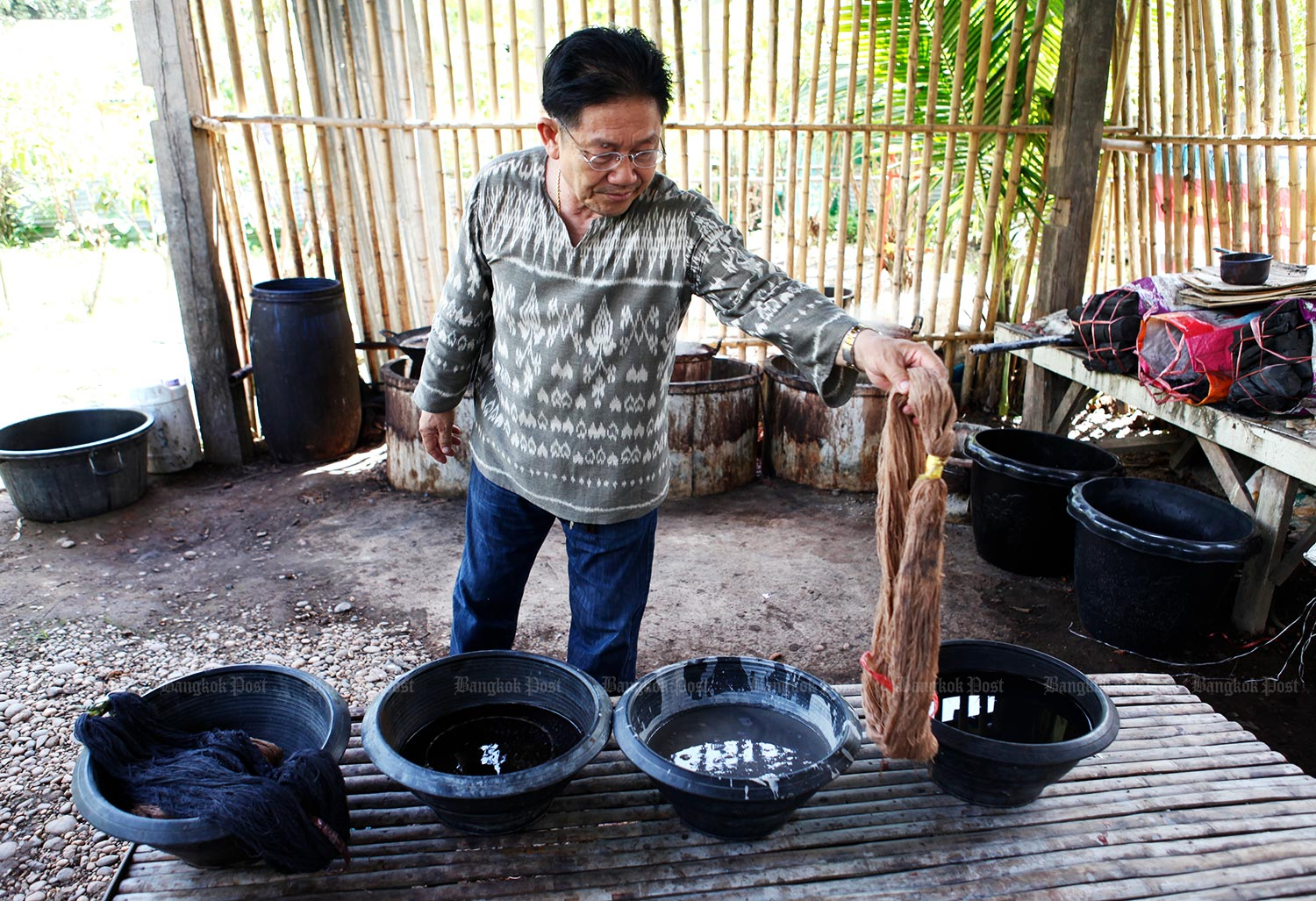 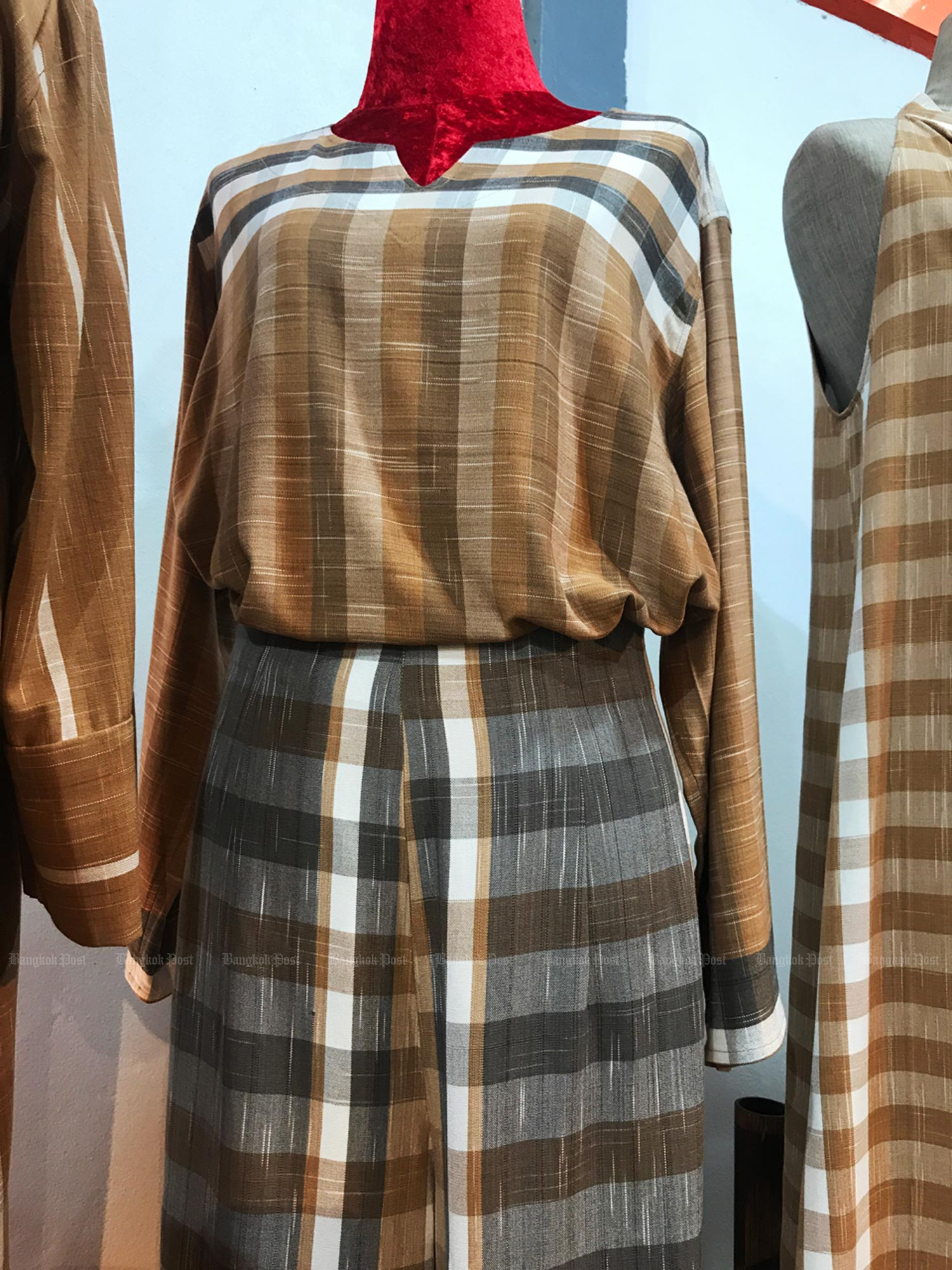 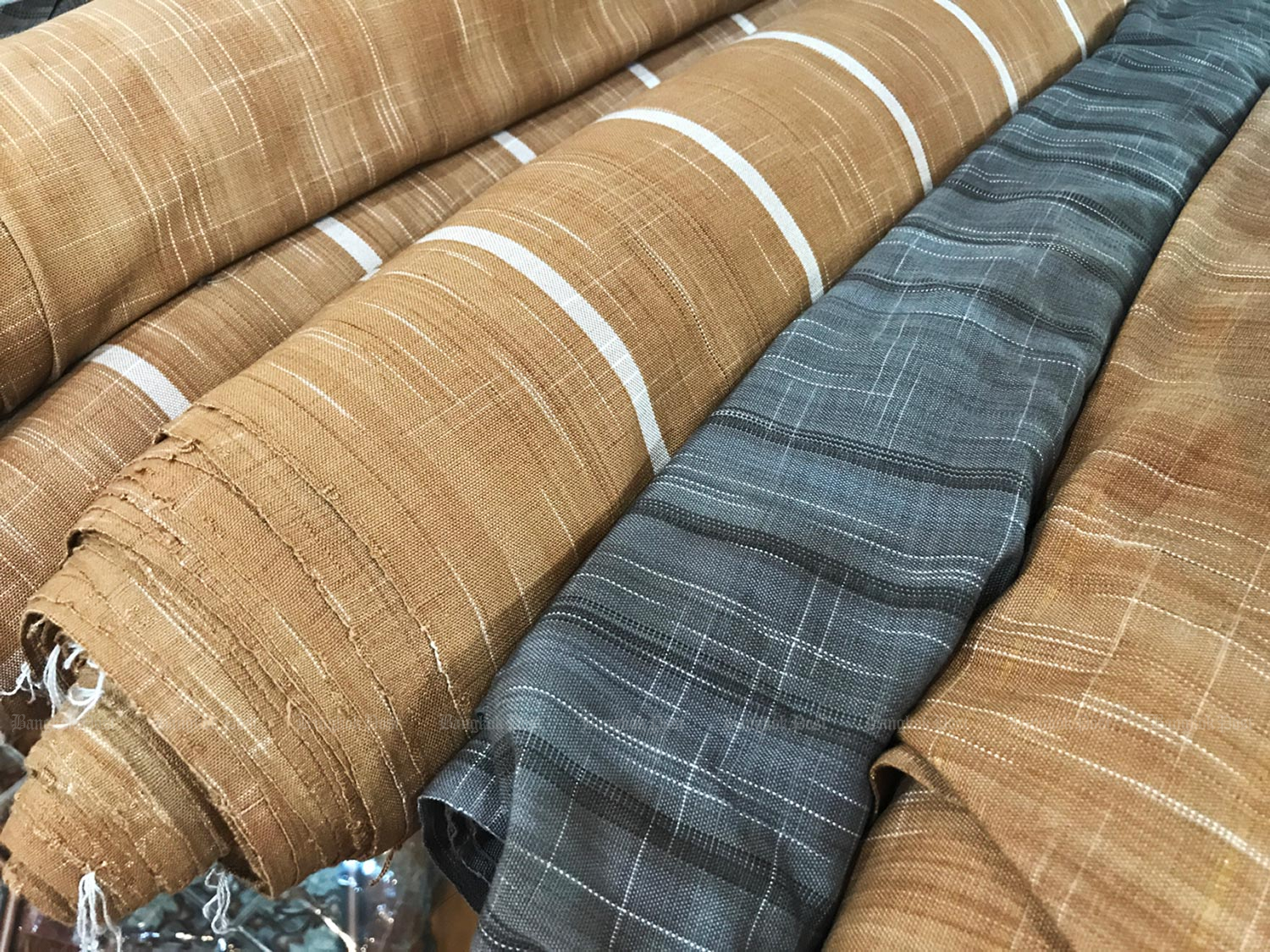 Dara Nakhee is the name of this learning centre for woven cotton clothes in Ban Sa-ngo in Muang district. Thanks to the efforts of Somporn Saengkongmee, the president of the Dara Nakhee Weaving Group, she has now opened her home to tourists to see how her group creates cotton yarns, weaves cloth and dyes them with natural colours. She also applies the old wisdom of the village to make her cotton textiles soft by dyeing the cloth or cotton yarns in fermented mud. Groups can arrange a workshop for those who want to learn how to make mud cloth. 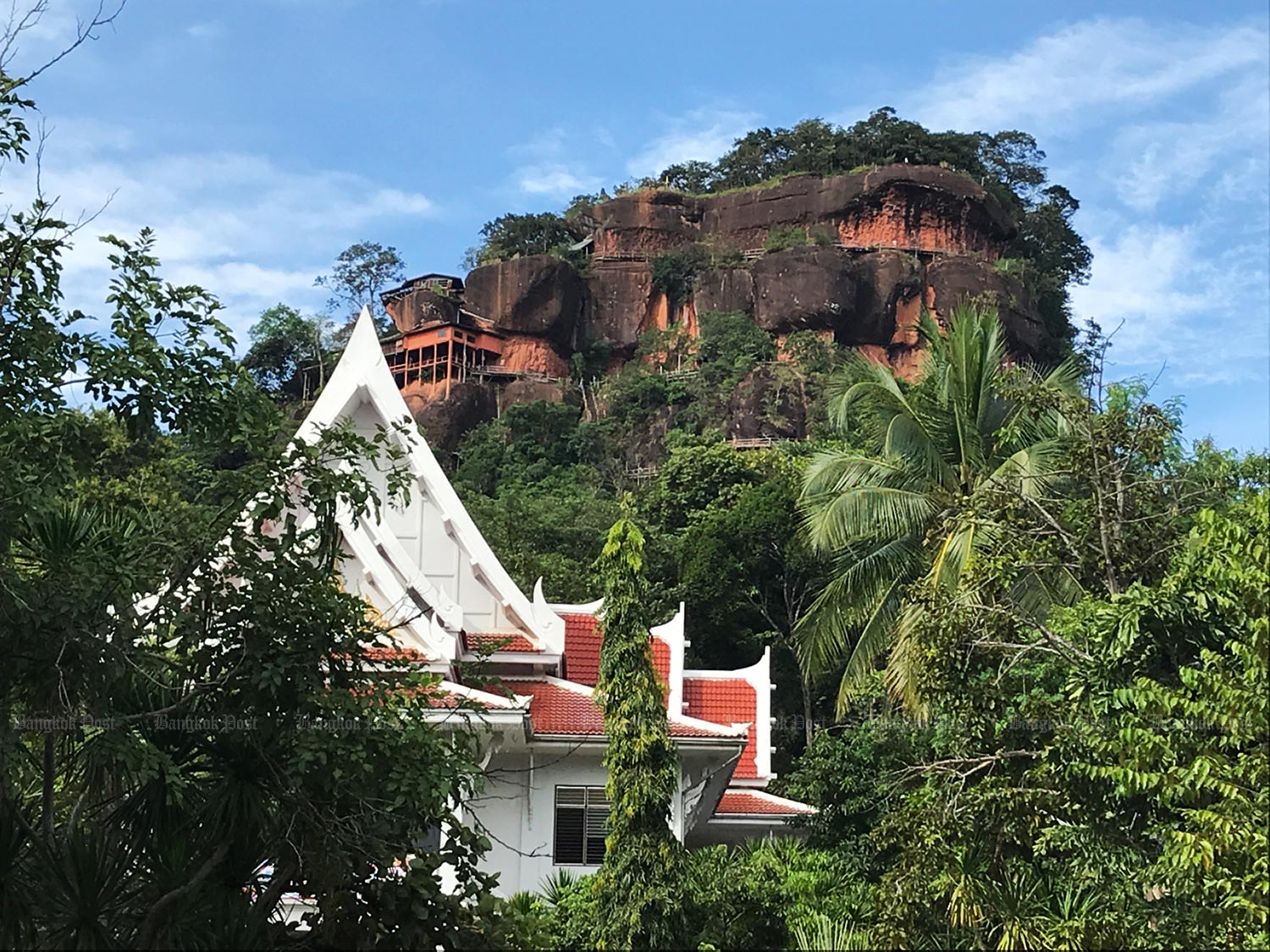 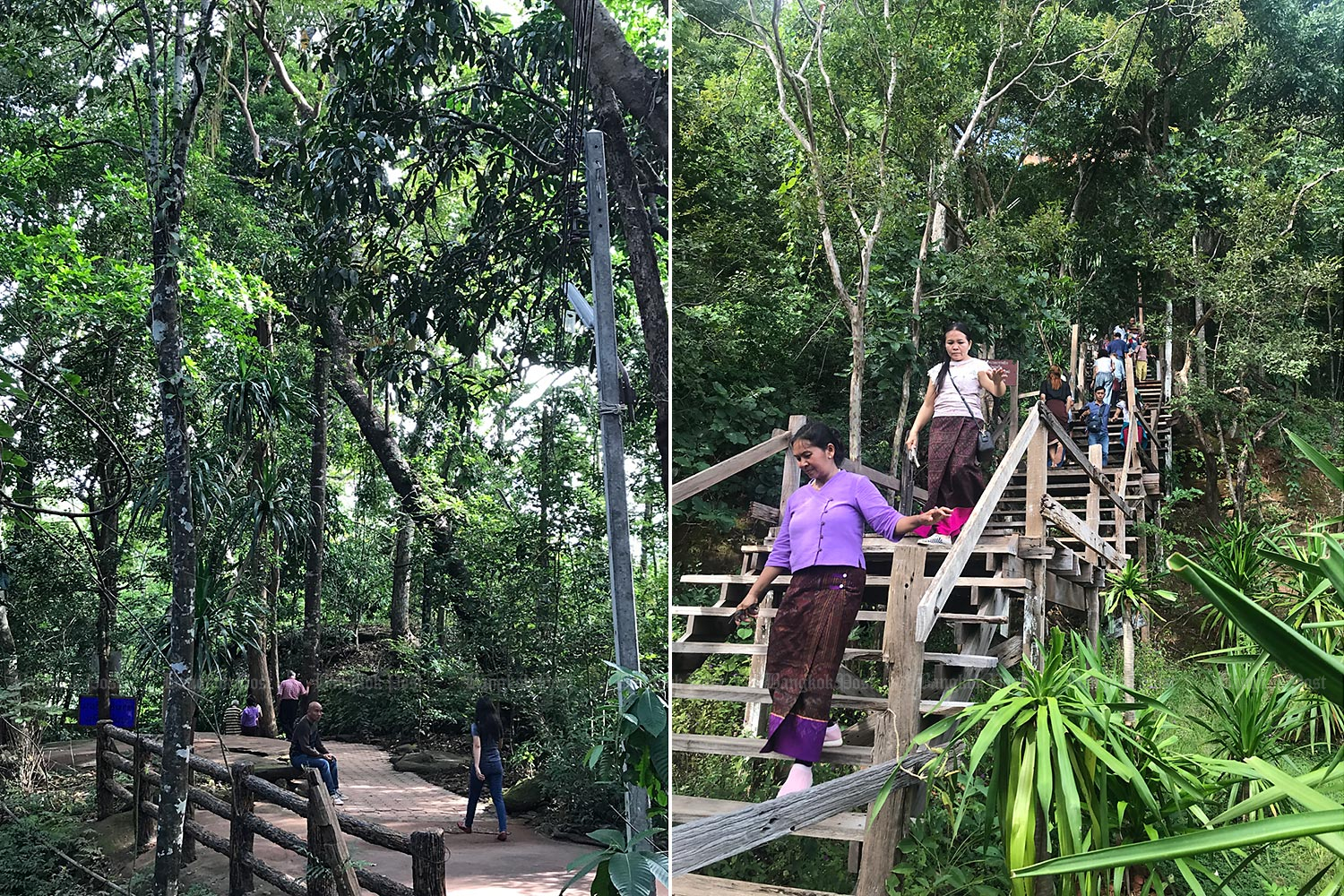 Wat Jetiyakhiri Viharn Phu Thok, better known as Wat Phu Thok, is one of the most popular attractions in Bueng Kan. Phu Thok is a northeastern phrase meaning lone mountain. It is located about 45km southeast of the city. The temple used to be a quiet place of meditation before hordes of tourists began to descend on the site to pay their respects to the revered late abbot, Phra Ajarn Juan Kullachettho, who established the temple. Meanwhile, other tourists might simply want to test their endurance by climbing the stairs to the hilltop 460m above the ground. The structure is not a straight staircase but combines wooden walkways along the cliff and encircling the hill in seven levels. The highlight is on the fifth level where the prayer hall is located. 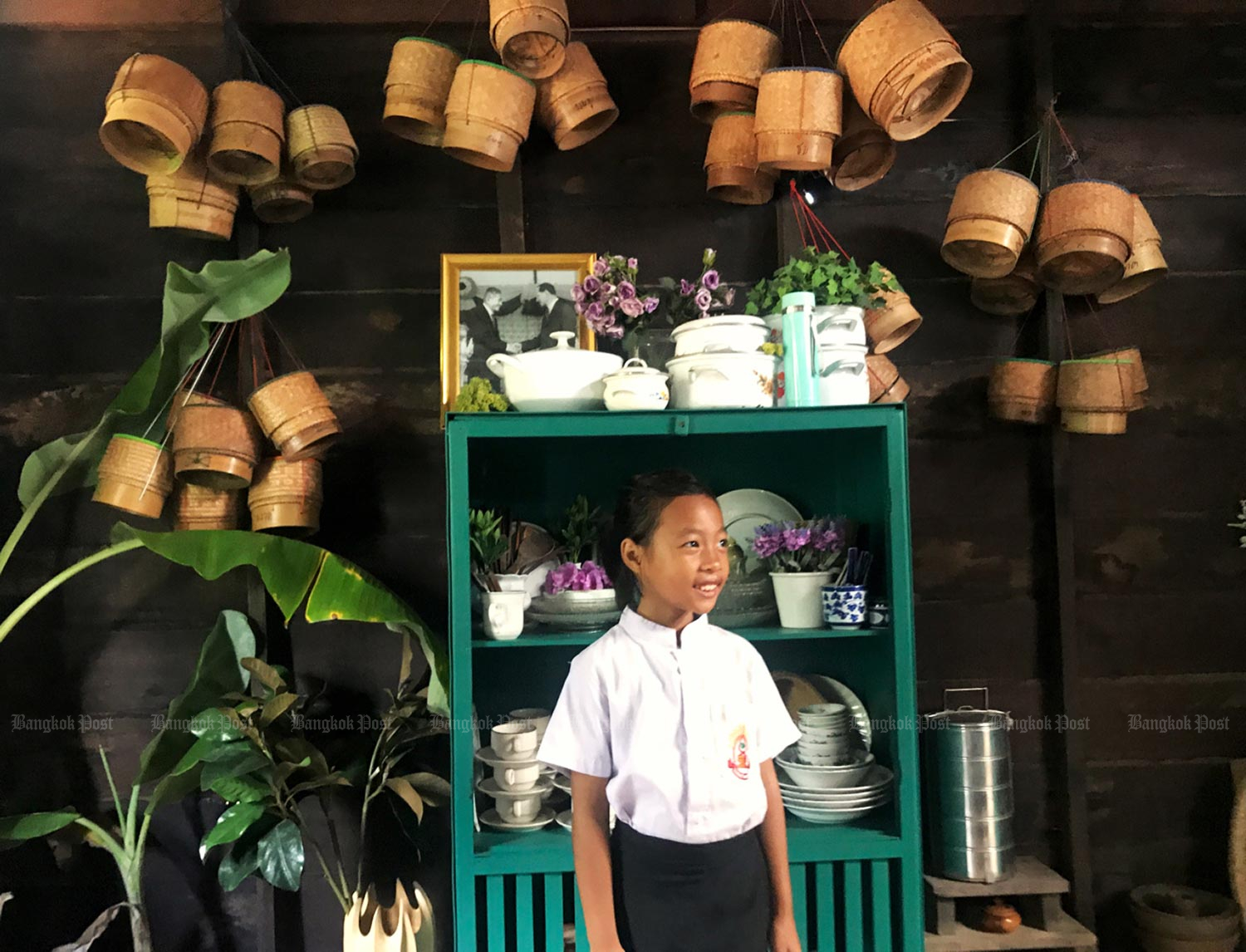 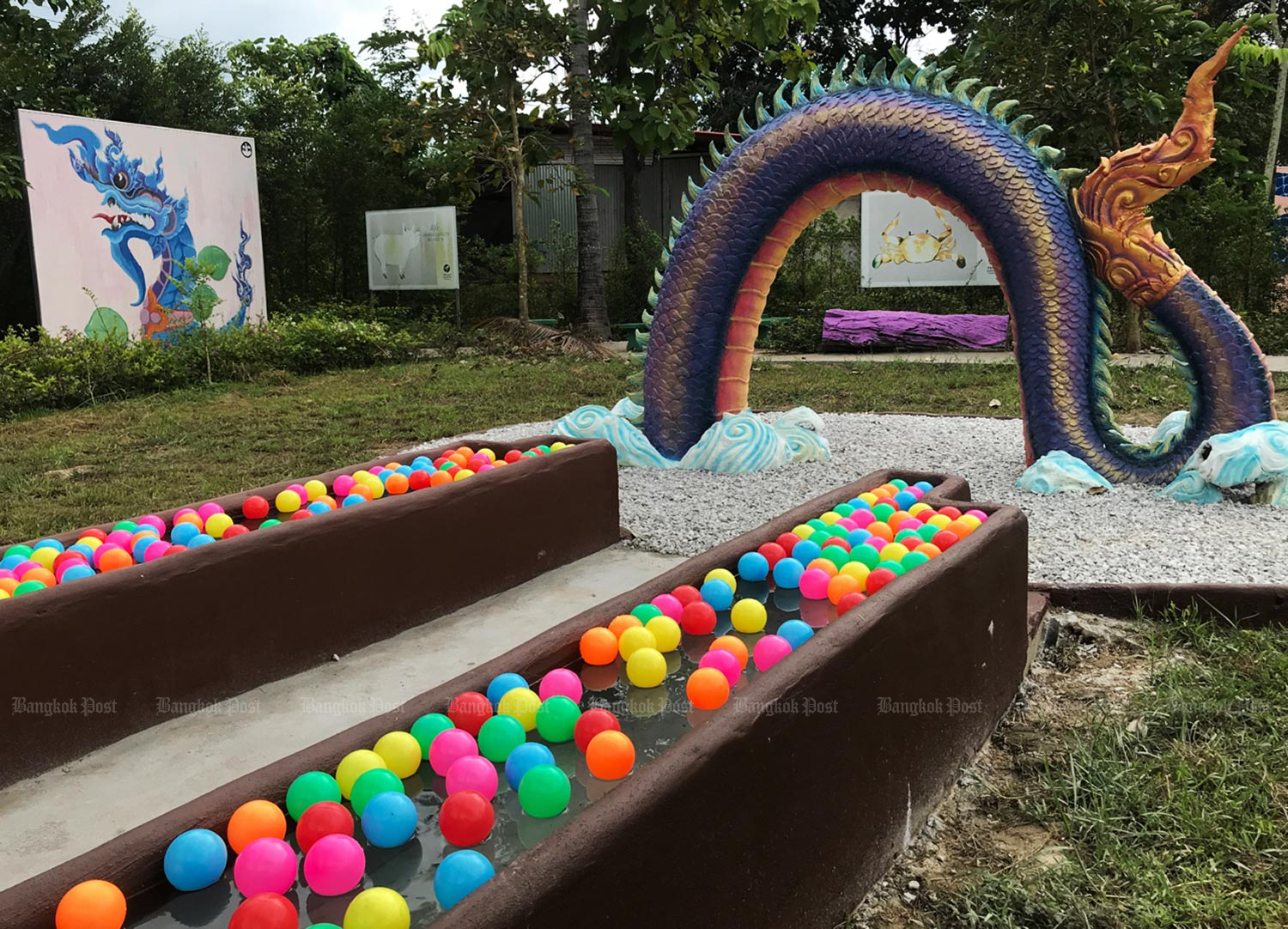 The Life Community Museum Bueng Kan is located in the quiet Khi Lek Yai community in So Phisai district. The project is the brainchild of Suthipong Suriya, who has turned his family’s wooden house into a museum to showcase local beliefs related to the Naga and the local way of life. During the weekend, students come to the museum to offer guide services to visitors. Suthipong has also segmented his 4 rai of land to be a market where locals sell their food or handicraft products, an activity zone for kids and youths as well as an art zone where you can see Naga street art and pay respect to the three-headed Naga structure. With his effort to turn his community into a tourist attraction, he has also joined hands with local artists to paint street art throughout the community.

I joined hundreds of people to observe naga fireballs at Wat Ahong during Full Moon at the end of Buddhist Lent, or wan ok phansa. Although I knew I would have had better opportunities to experience the annual phenomenon in the neighbouring province of Nong Khai, I still wanted to take the chance.

People came to the temple in the late afternoon to reserve the best spots along the river. After sunset, the temple ground was crowded. Some families even brought their own mats and food and the ambience was similar to that of a picnic. Monks chanted their evening prayer while onlookers fixed their eyes and mobile phones toward the river. Dusk was falling slowly for those who had been waiting patiently for hours to catch a glimpse of the fireballs. From time to time, people along the border of Thailand and Laos lit firecrackers and rockets, floated lanterns which were released into the sky, and even krathong which were released into the Mekong.

"People saw 35 fireballs in Nong Khai," said one looker to her peers after reading the news on her mobile phone.

But there were no cheers where I stood and no orange fireballs shot into the sky. Soon, my patience wore down. Based on my first experience over 20 years ago in Vientiane where I was able to see fireballs shooting into the sky for hours after sunset, this time my luck ran out. Frustrated, I left the temple and gave up my seat to a newcomer to find delicious Vietnamese food instead.

The next morning, I drove along a road running along the Mekong to Ban Pak Khat, the border between Bueng Kan and Nong Khai. Although it could be a pleasant route, the two-lane dirt road was not in a good condition. Besides the local communities, I was also able to spot a few accommodations and dyke constructions to protect soil erosion along the border. I returned to the city using Road 212 which will be expanded to be a four-lane road to serve the fifth Thai-Lao Friendship Bridge, crossing from Bueng Kan at Ban Ahong to Paksan in Bolikhamxay province in Laos.

My next stop was Hin Sam Wan, which means three whale rocks. The attraction is located in a national reserve area which includes the Kala, Phu Sing and Dong Si Chompu forests and is about 23km from downtown Bueng Kan.

The site was given its name because of the three giant rocks that look like the shape of whales. Since the rocks have different sizes, locals call the rocks a family of whales consisting of a mother, father and baby. According to scientists, the rocks date back some 72 million years.

Visitors are not allowed to drive their own vehicle to the top of the mountain. Instead, a shuttle service is available. To reach the top, all of the vehicles are a 4x4 pickup because the 4km route is in a bad condition and features narrow dirt roads with muddy puddles. In these conditions, the driver must have off-road skills. At the site, the authorities constantly communicate through walkie-talkie to inform other drivers about their location to ensure there is a clear path before they head up or down the hill.

It took us about 15 minutes to reach the hilltop. 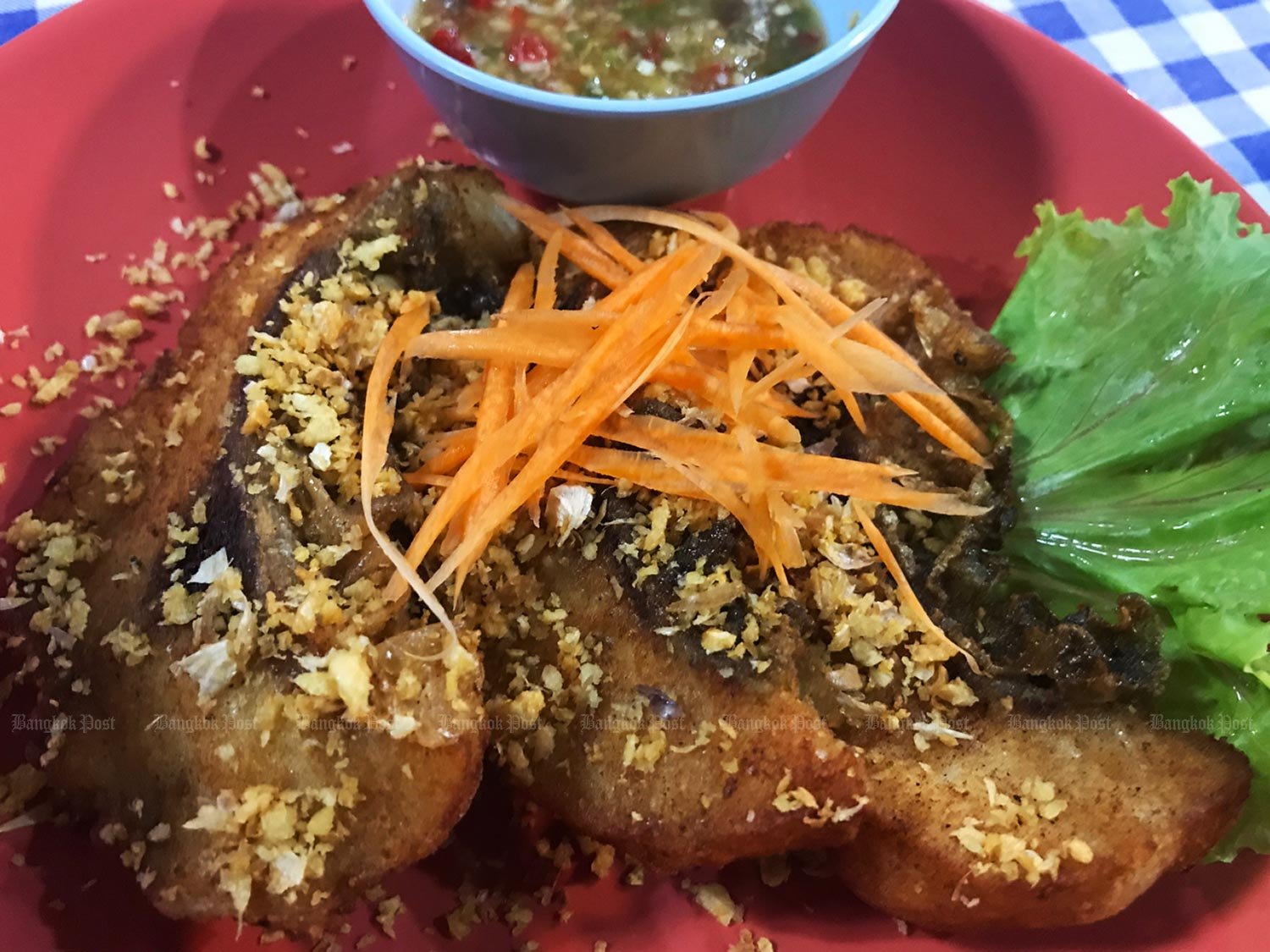 Restaurants along the Mekong offer plenty of choices of fish, some of which I have never heard of before such as pla chok (soldier river barb) and pla khae (goonch). I dined in Khrua Po Kaew, one of the popular restaurants in the city. I tried pla chok tod krathiam (deep-fried sliced soldier river barb topped with deep-fried garlic) and po taek pla khae (sour and spicy goonch soup). The food was tasty.

Vietnamese food is quite popular in Bueng Kan. In the early morning, you can find khao piak (chewy rice noodles in pork broth topped with mu yo or pork sausage and pork ribs), kai krata (sunny side up fried eggs topped with minced pork, mu yo and kunchiang or sweet pork sausage), and soft baguette which is sliced open and inserted with mu yo and mu young (shredded dried pork). One of the recommended restaurants is Ban Khao Piak which opens around 6am. For lunch and dinner, you can head to Naem Nueng Khun Ao. It serves both Vietnamese and Isan food like som tam Bueng Kan that mixes sliced papaya with fermented fish sauce, med krathin (lead tree seeds) and small river shrimps.

"You can spend as much time as you like. Just make sure you get on a shuttle before 5.30pm," said my driver. While I was looking at the map on the information board, the driver told me that there were two attractions at the top. The first was the viewpoint, which was about 50m to my left. The second and to my right was the access to Hin Sam Wan.

I chose to see the viewpoint first. It was a flat rock where I could get a bird's-eye view of land covered with rubber tree plantations. Bueng Kan is also known for being the site with the largest number of rubber tree plantations in the Northeast. Later, I followed the arrow sign to the whale-shaped rocks. The path was so easy that I did not even realise I had already walked on the first whale-shaped rock.

From where I was, I could not tell if the shape of the rock resembled a whale until I stood on the top of another rock, known as the Mother Whale, and looked back at the first one, the Father Whale. The rock reminded me of the boxed-shape head of a giant sperm whale.

"Can you see the mouth?" asked my driver when I returned to his truck. I shook my head and said no. He told me that I had to be close to the edge of the cliff to spot it. To tell you the truth, I did not dare get close to the edge. For me, it was scary to see people walking freely near the edge since there are no safety measures in place. I saw only a small warning sign informing tourists not to go further than a discrete yellow line. Security guards were not around to blow a whistle as a warning. If something falls over the cliff, it will hit the ground in no time.

Tourists are allowed to visit only two rocks because there is no access to the Baby Whale. Most of the beautiful shots of Hin Sam Wan rocks are taken from the sky. I noticed that some tourists had brought drones for aerial shots. From their pictures, it looked like the three whale rocks were swimming out of the dense green seaweeds.

From Hin Sam Wan, I went to other attractions including the renowned Wat Phu Thok, Life Community Museum Bueng Kan, a weaving community in Ban Sa Ngo, and Nong Leng reservoir. My three-night stay in Bueng Kan seemed to be too short to cover all the attractions, including the famous Naga Cave in Phu Langka National Park. I'd better spare some places for my next visit and perhaps with a plan to cross to Paksan when the fifth Thai-Lao Friendship bridge is completed in the next couple of years. 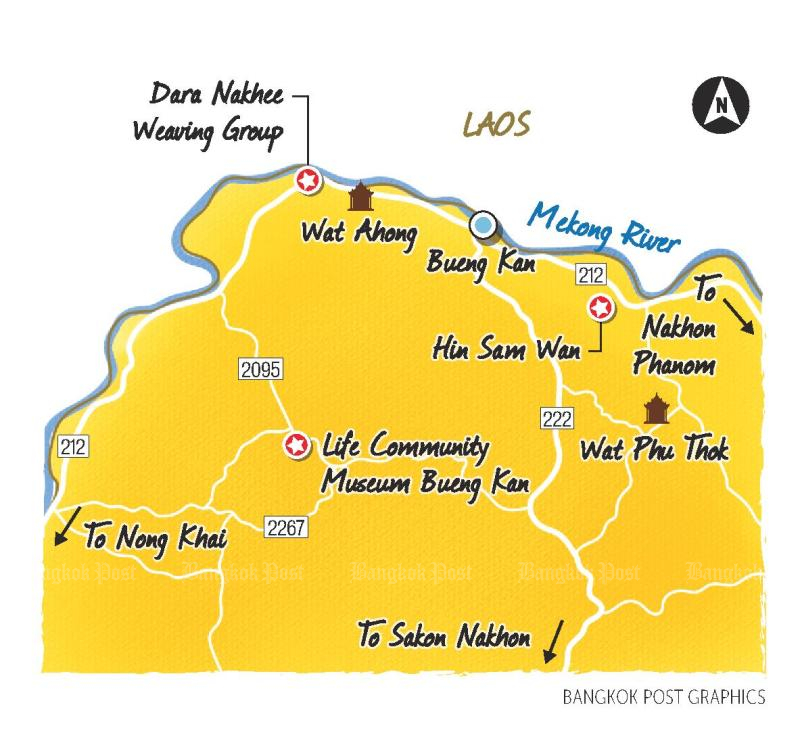