The renovation of Klong Ong Ang is complete with cool art, tasty food and a walking street of endless possibilities

The pictures of people kayaking and paddle boarding along Klong Ong Ang were still vivid in my memory. The activity was organised in the middle of this month to promote the canal makeover as well as Klong Ong Ang Walking Street. The photos triggered me to visit the site to see if the canal's water was clean enough for people to kayak or if I could find anyone doing so during my visit last Saturday. 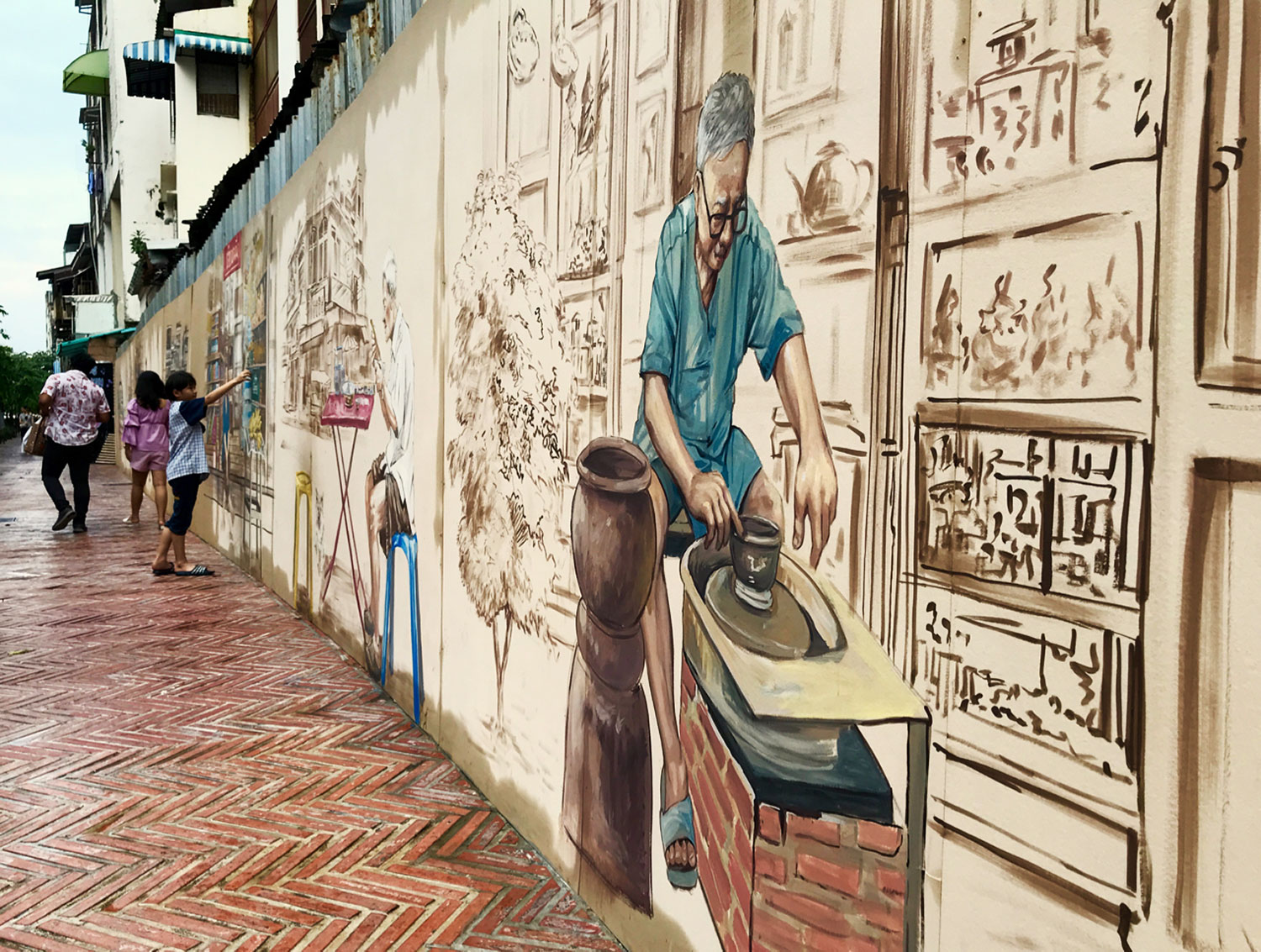 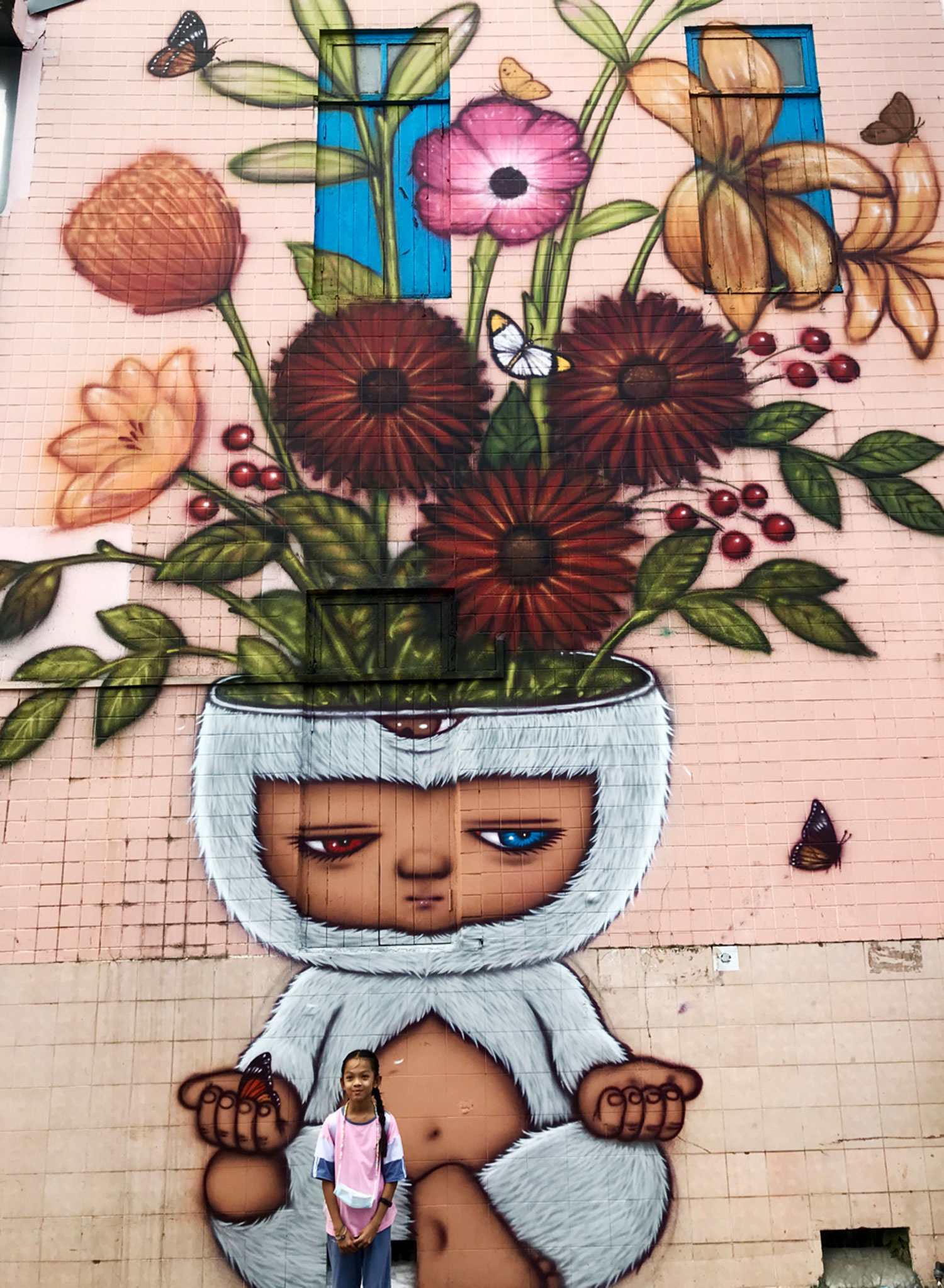 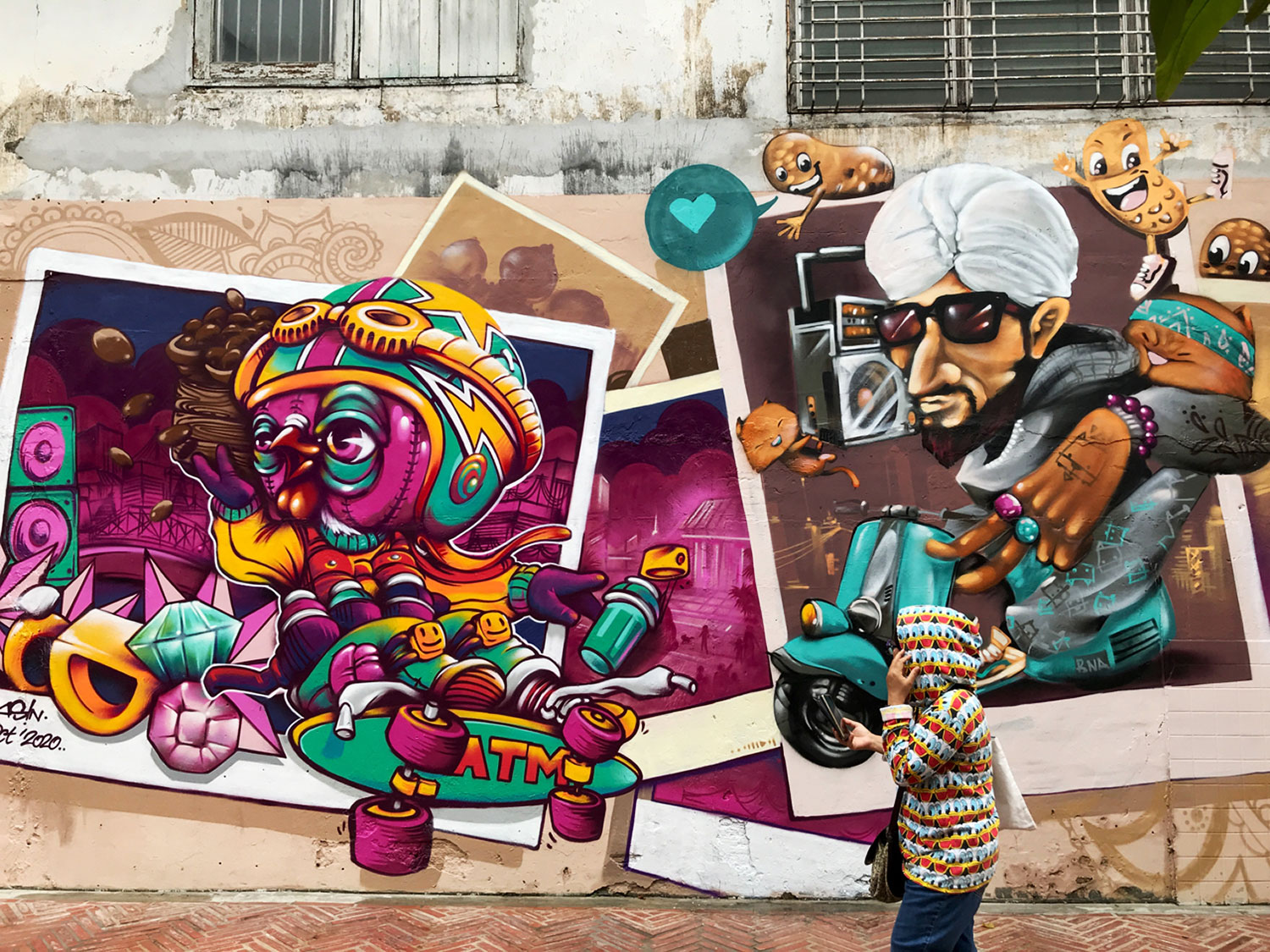 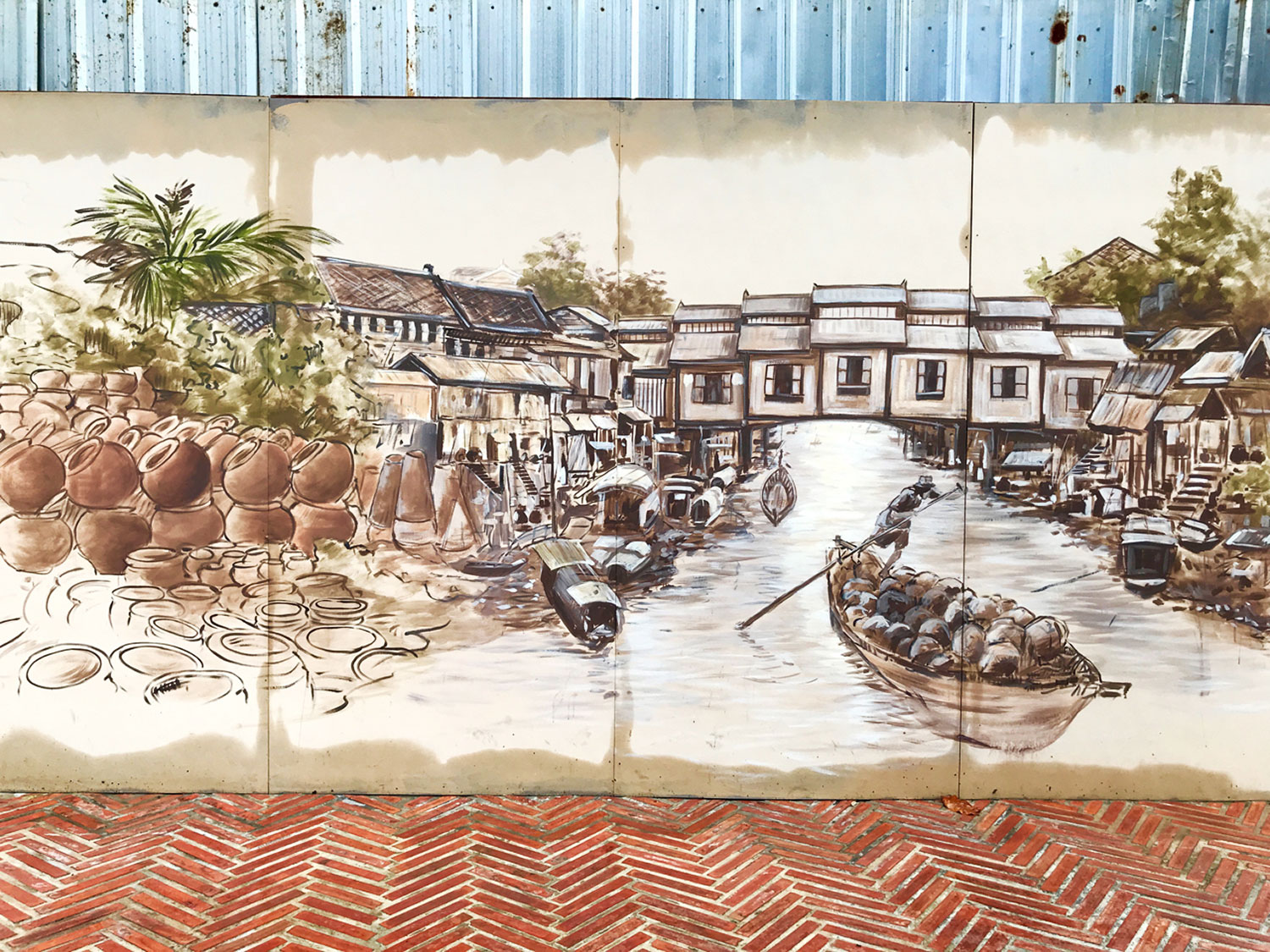 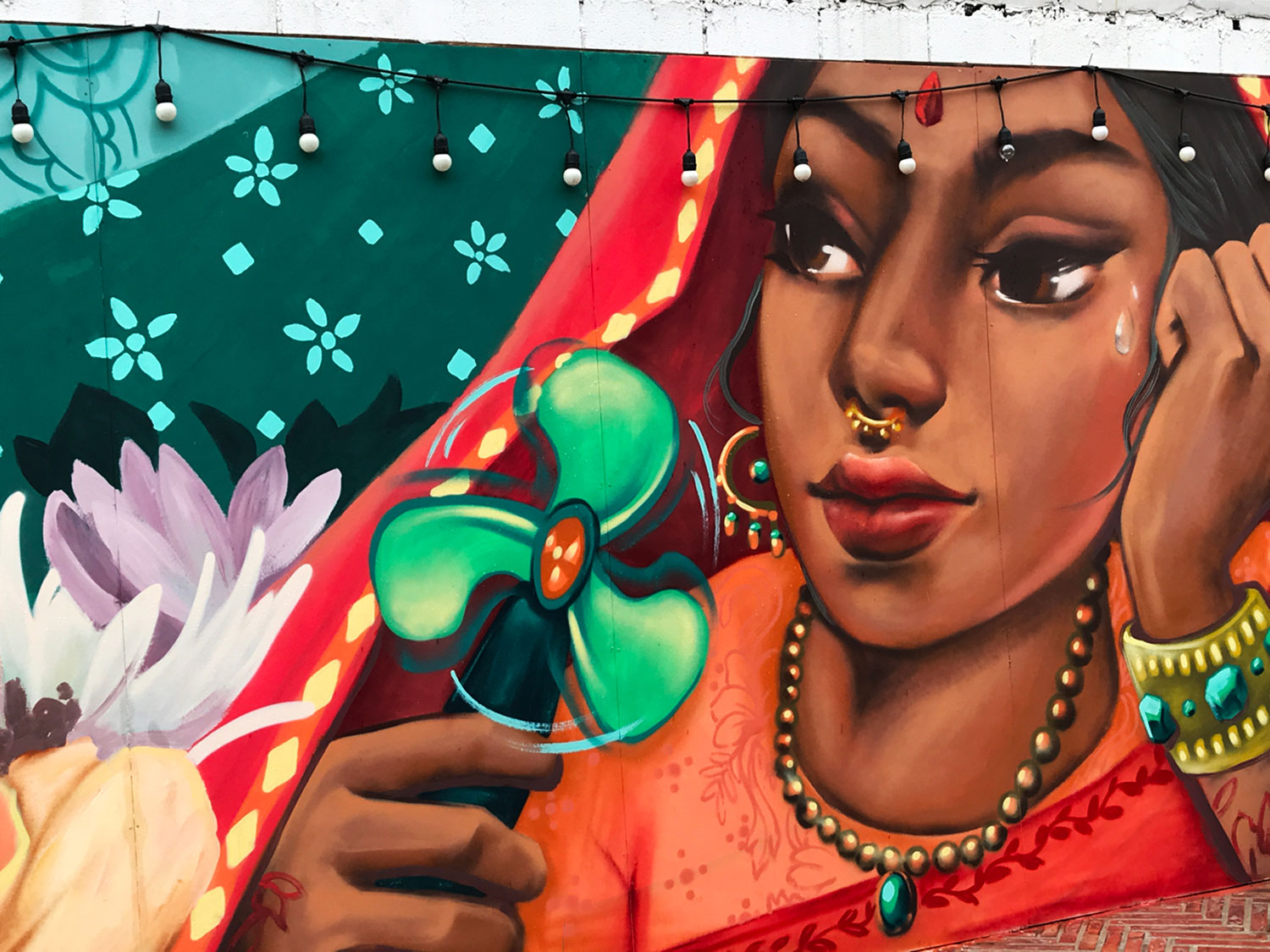 Plenty of street art is found along a 350m-long walkway from Damrong Sathit Bridge to Saphan Han. You will see the paintings on both sides of Klong Ong Ang. They show pictures of life along the canal such as a painting of people paddling wooden boats, a man making earthen jars or 3D arts which you can pose with as if you were in the image. There is also modern graffiti including the huge painting by Patcharapon Tangruen, better known as Alex Face. His painting shows Mardi, an imaginary child wearing a white fluffy bunny outfit with a third eye always on guard. The child sits cross-legged against a pink wall with a bunch of flowers on top of his head, making him look like a flower vase. 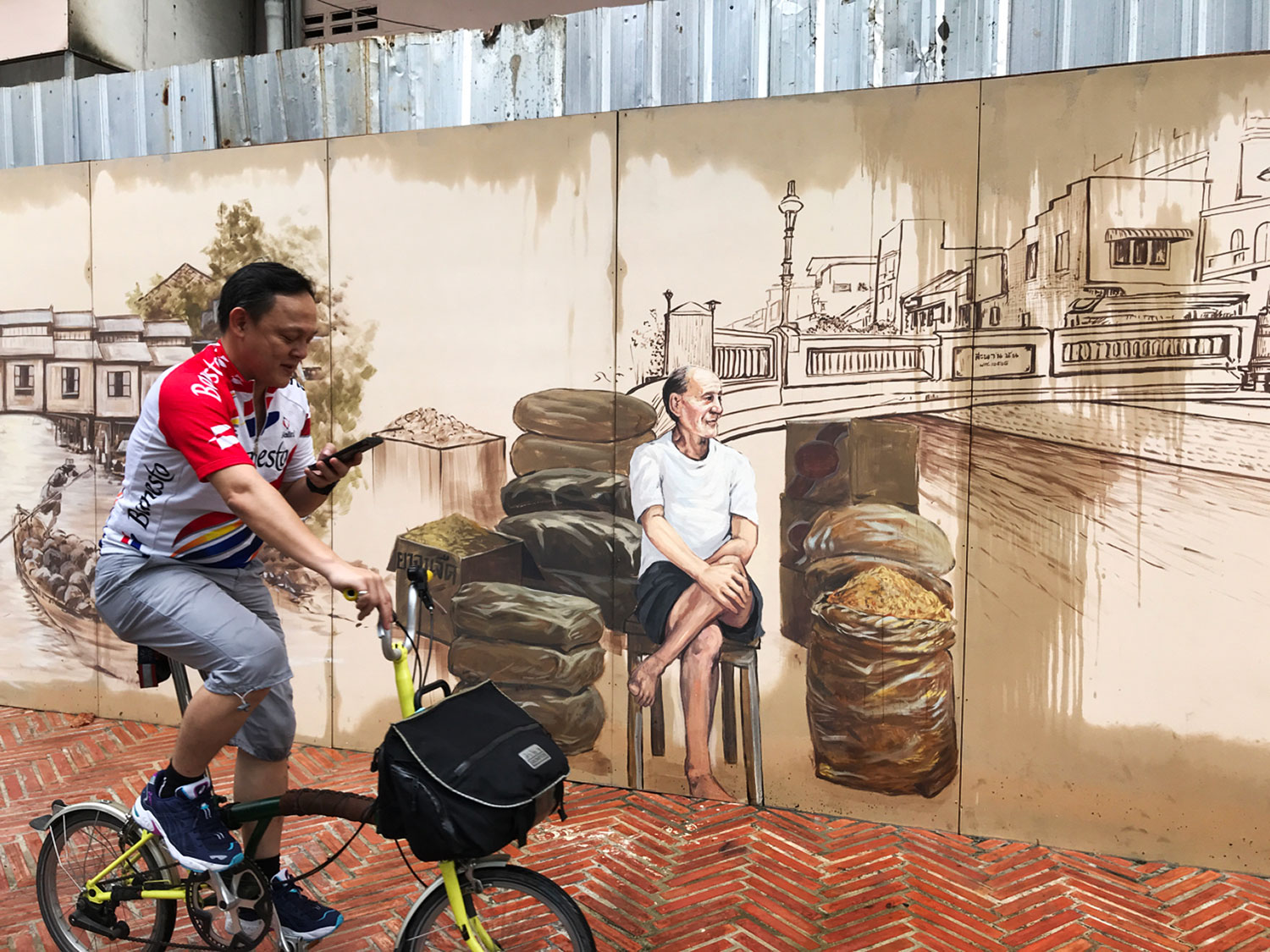 The Sam Yot subway station is built in colonial-style architecture to blend in beautifully with its surroundings. In contrast to the outside, the station inside is quite plain, unlike its neighbouring stations of Wat Mangkorn and Sanam Chai. The Sam Yot station exhibits old photos such as the tram service in 1887 and pictures of old items excavated from the site such as roof tiles and wooden railroad sleepers. 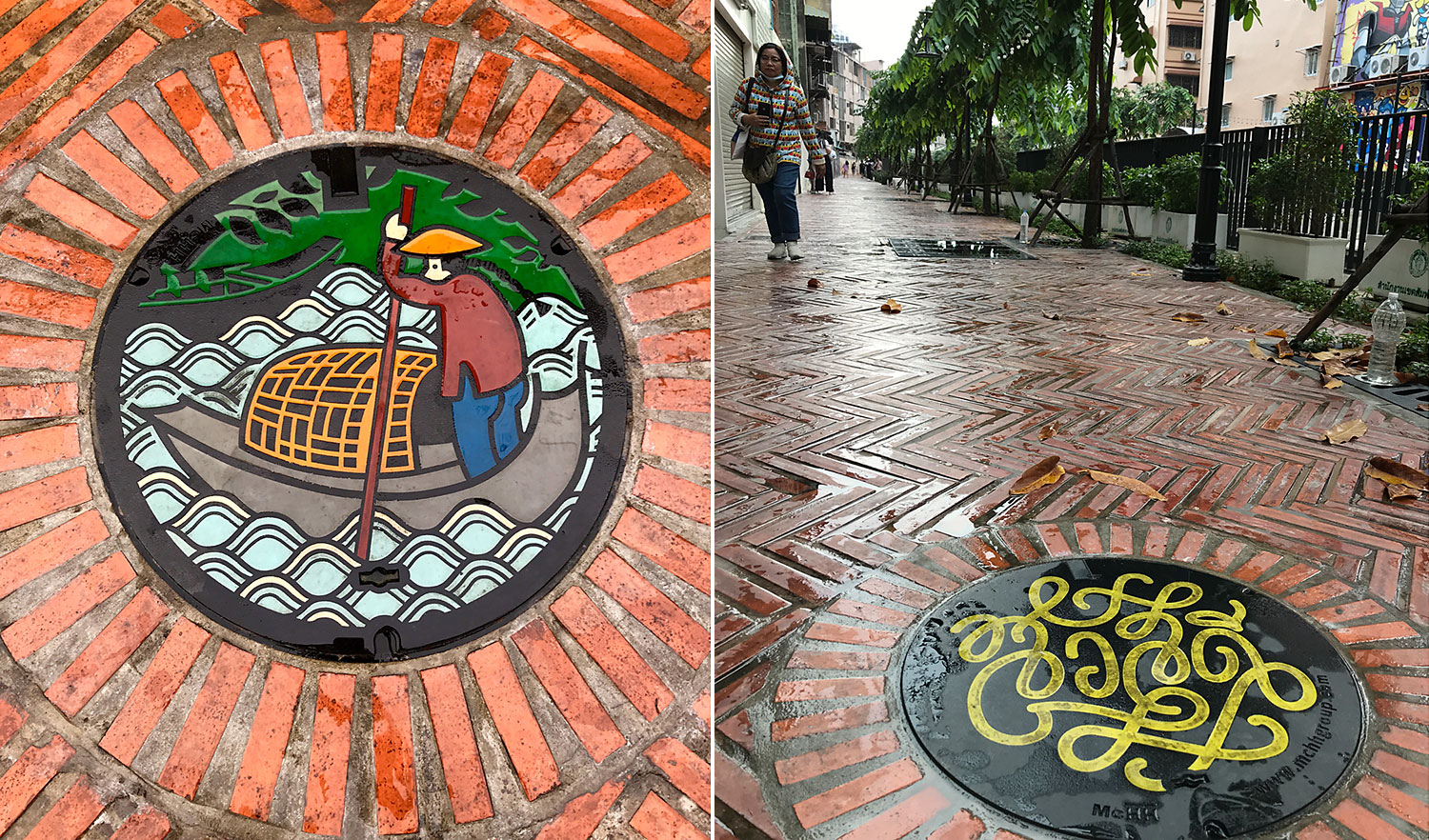 When you walk alongside Ong Ang Canal, do not forget to check out the colourful manholes. The project was created in 2015 by a research team from the Painting, Sculpture and Graphic Arts Faculty of Silpakorn University and funded by the Thailand Science Research and Innovation agency. The team wanted to highlight the history and way of life of the community. A short walk from Saphan Lek, you will find the first two manholes, out of the five images in total. One image is calligraphic writing of the word sawasdee and the other is a trader rowing a boat in Ong Ang Canal. If you want to walk further to Osathanon Bridge which is located close to the Memorial Bridge (about 750m in total distance), you will find another three manholes — an image of a man riding a scooter carrying rolls of fabrics; a Chinese family having supper; and calligraphic writing of the words phra nakhon (meaning the capital). The implementation of the manholes is part of the Bangkok Metropolitan Administration’s plan to redevelop the landscape of Klong Ong Ang. 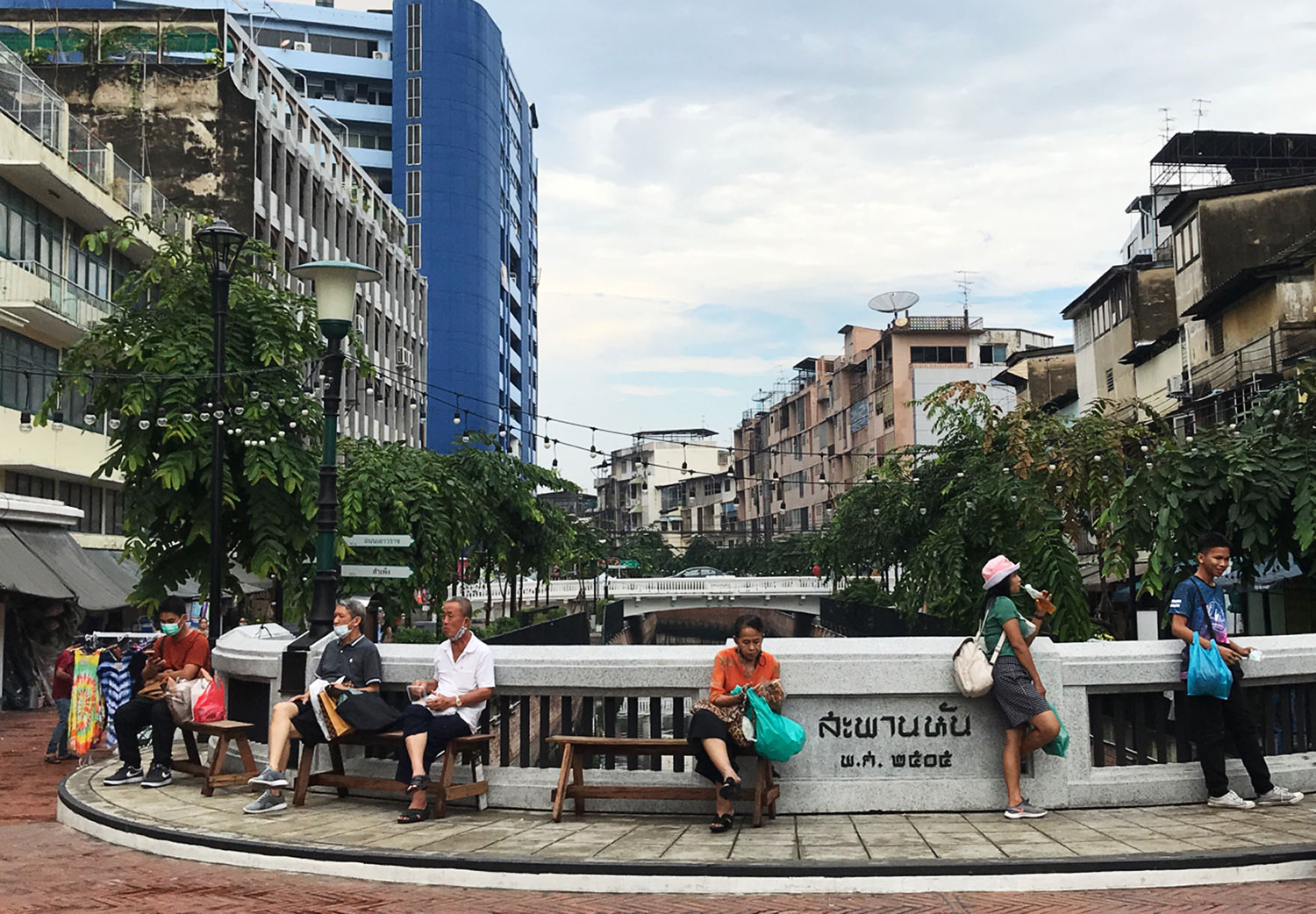 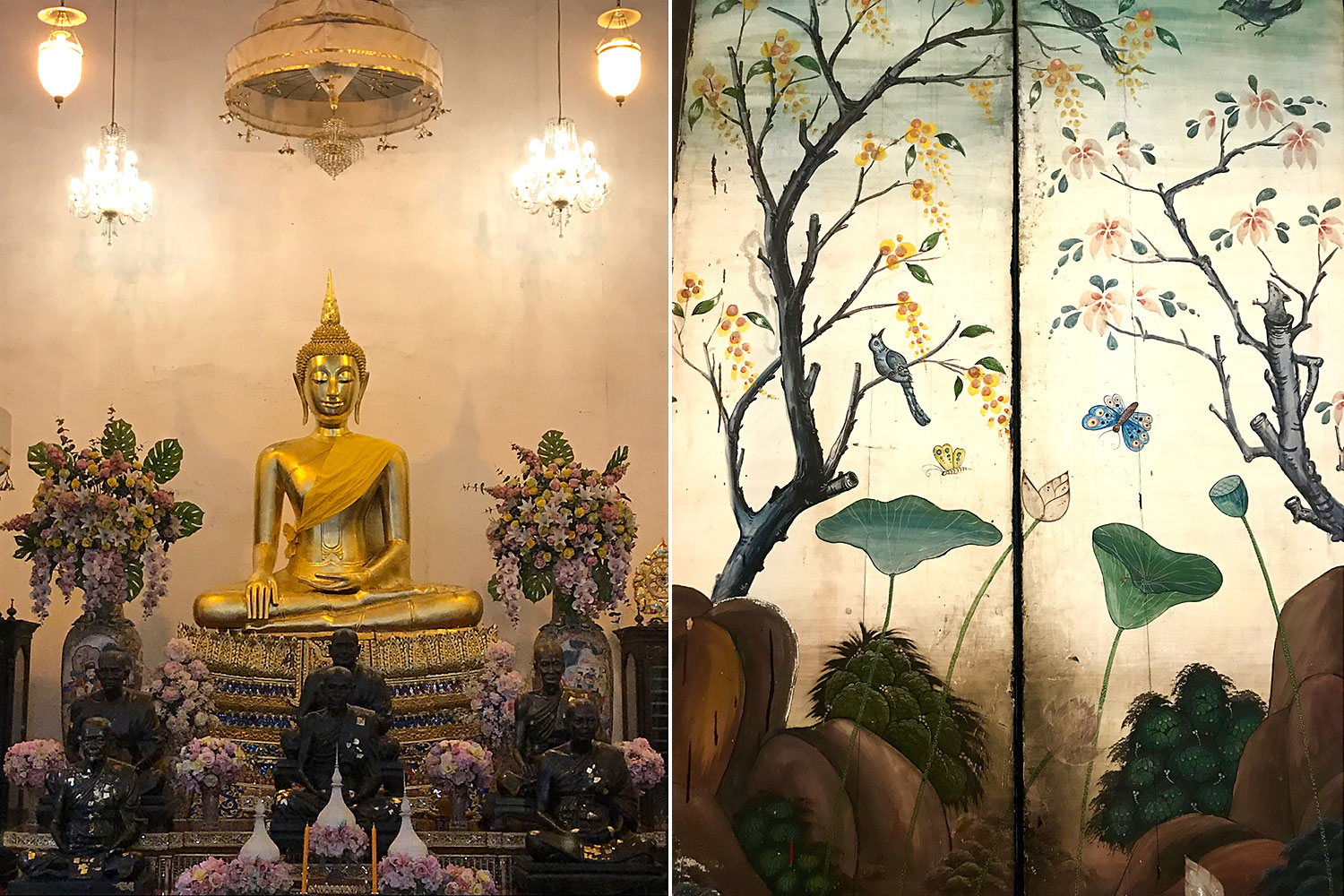 This seated Buddha sculpture is housed in a prayer hall of Wat Suthat Thepwararam, located just across the Anukan and Siri Phong streets from Rommaninat Park. The origin of the Buddha statue is unique thanks to King Rama III. In 1839, the government seized and destroyed about 222 tonnes of opium. The remaining brass opium boxes (or klak fin) piled up so King Rama III ordered them to be melted and made it into the Buddha image to remind citizens not to get involved with the drug. The Buddha sculpture was known as Phra Klak Fin. Later King Rama IV named the image Phra Phuttha Setthamuni. Wat Suthat Thepwararam was built in 1807 during the reign of King Rama I and completed in 1847 during the period of King Rama III. The temple also houses large murals which were painted in the 1840s in its ubosot hall as well as the Phra Srisakayamuni Buddha image, a large bronze Buddha sculpture from the ancient Wat Maha That Temple in Sukhothai province. 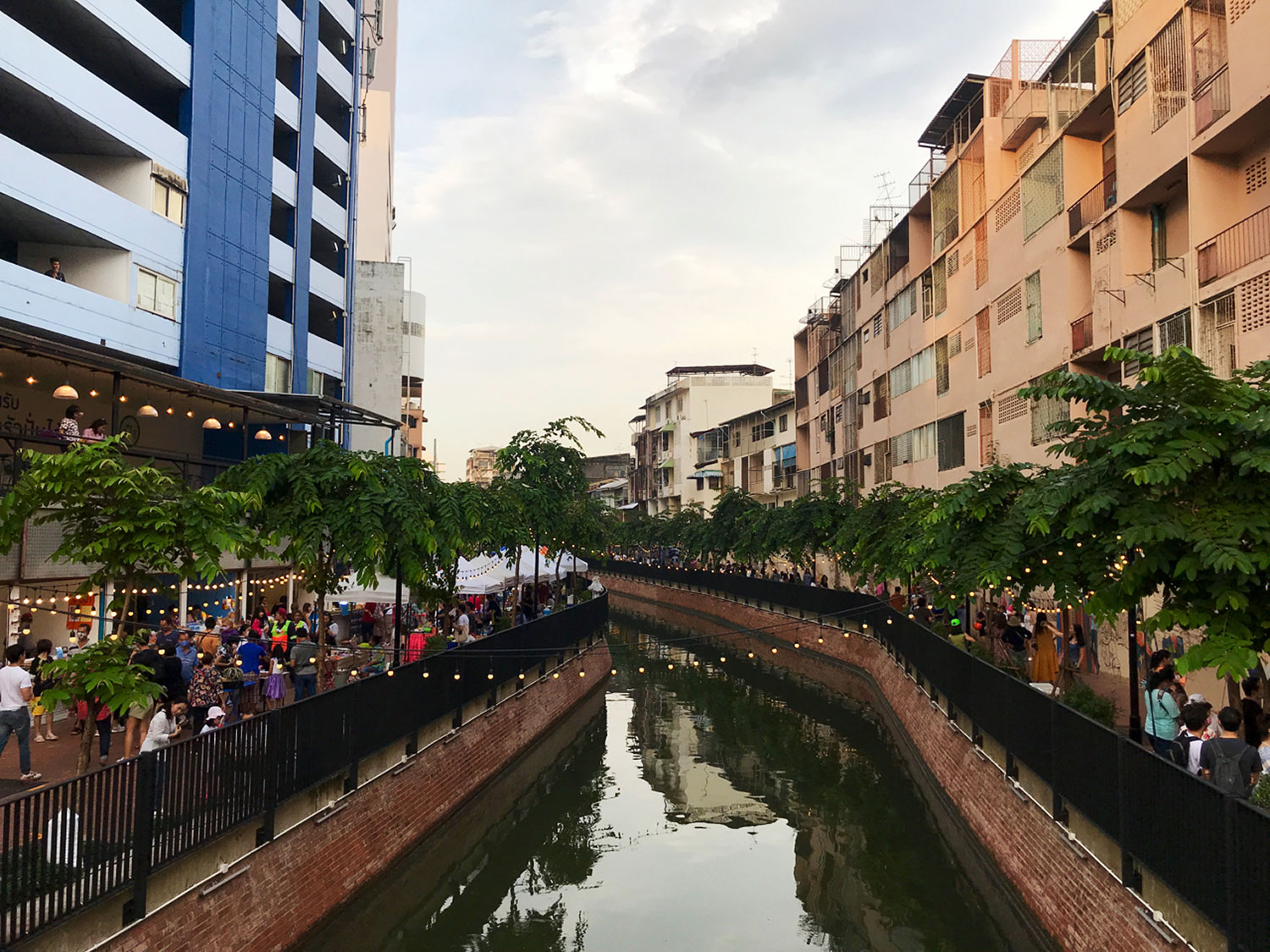 The do-over of Klong Ong Ang makes it crowded during the weekend. Thanks to an idea from the Bangkok Metropolitan Administration, it opened a walking street with stores selling food, fashion items and crafts along one side of the canal from Saphan Lek to Saphan Phanuphan bridges. The walking street is open from 4pm to 10pm from Friday to Sunday and will run until the end of December. 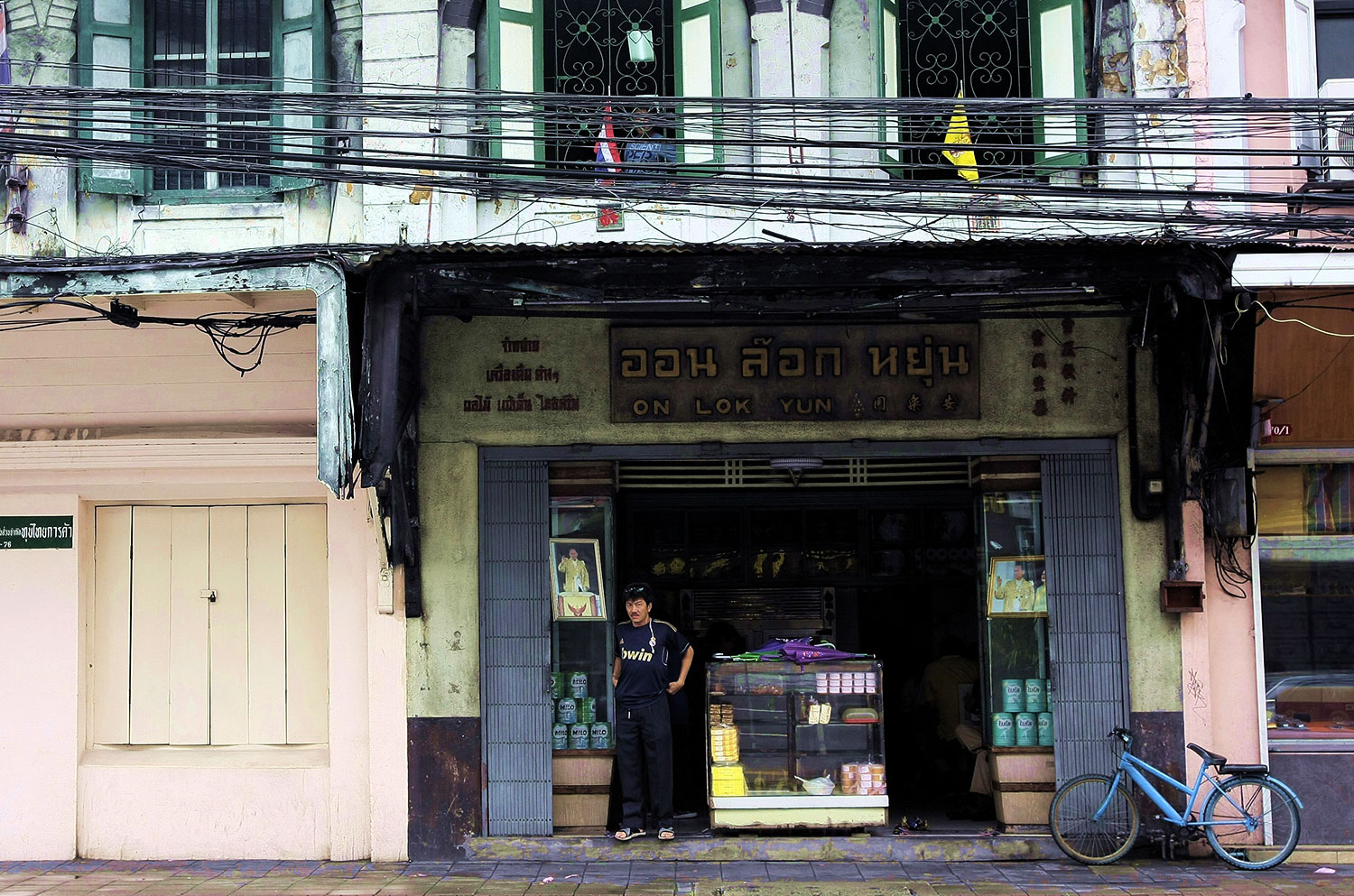 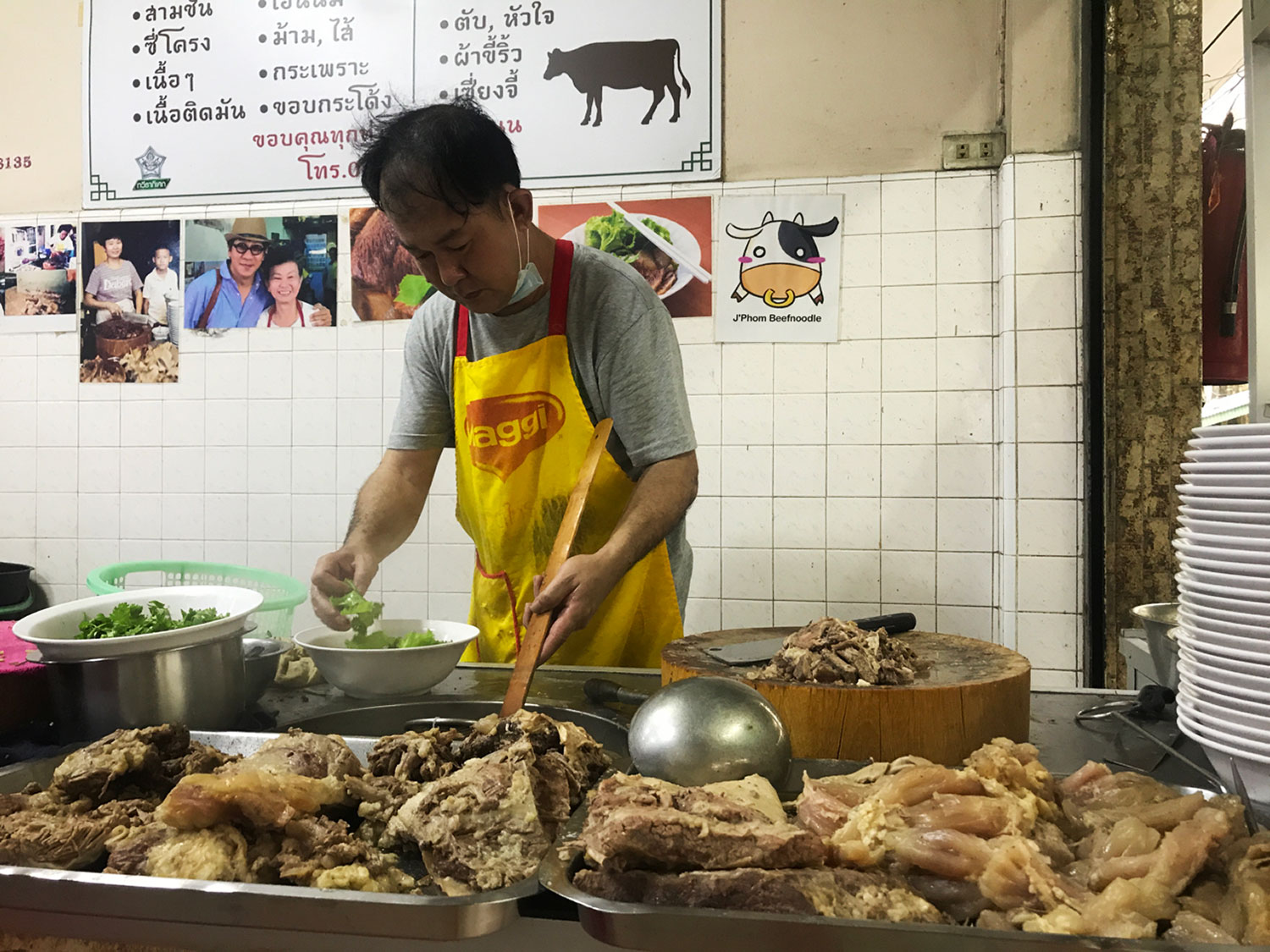 In the Wang Burapha area, you can find plenty of street food and sidewalk-style restaurants with tables and chairs set up along the footpath. On Charoen Krung 6, you will find choices from long-established eateries. One is Kuaitieo Neu Jae Phom, which has served beef noodle soup for three generations. Others include Khao Mu Daeng Nai Hui, which has offered roasted red and crispy pork with rice for 80 years, and Ji Jong Hwo restaurant, which has been known for its chicken duck noodle soup for more than five decades. If you walk on Charoen Krung Road and head to Sala Chalerm Krung theatre, you will find another classic restaurant named On Lok Yun, which has served American breakfast and traditional coffee for more than 80 years. 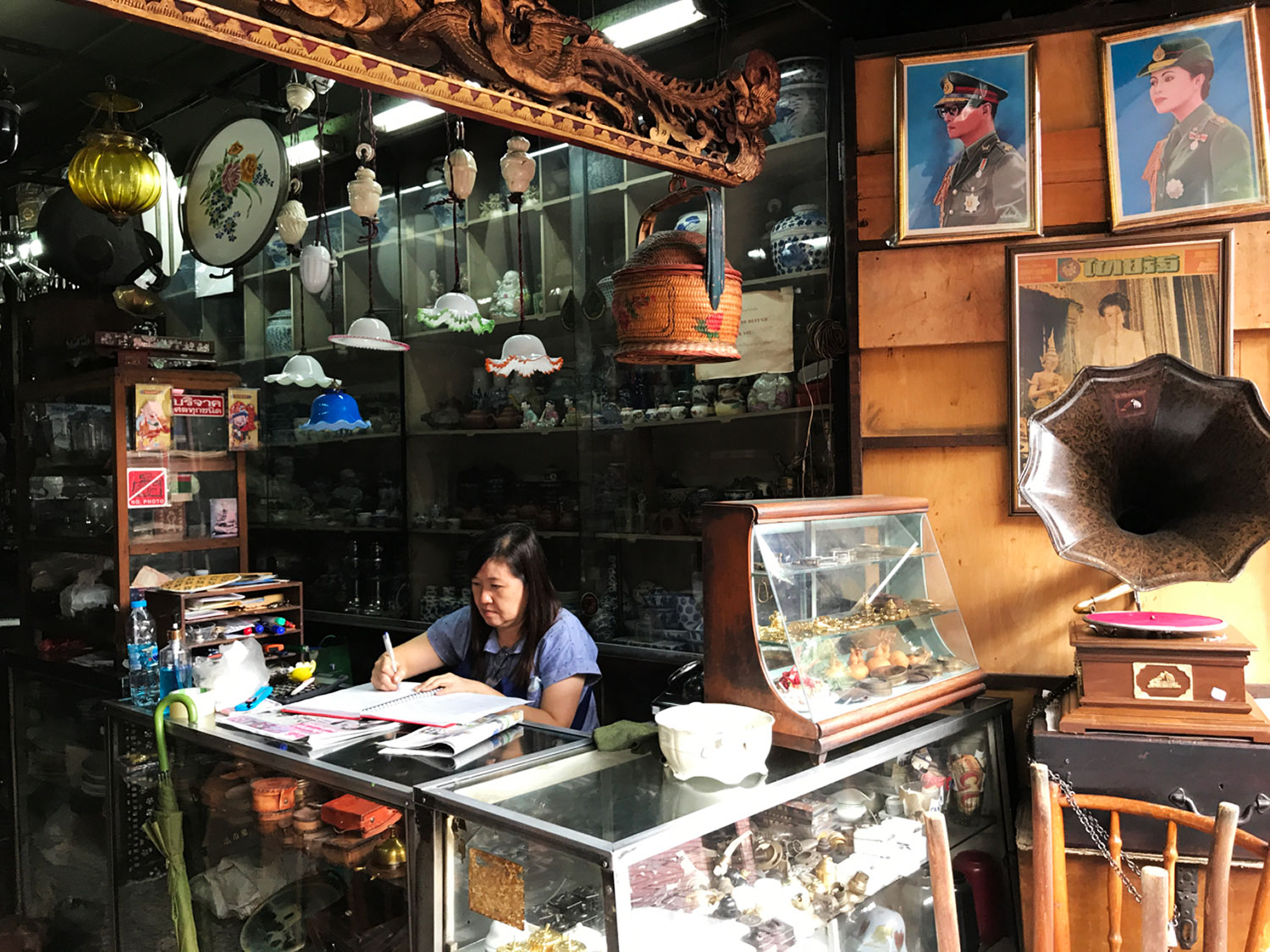 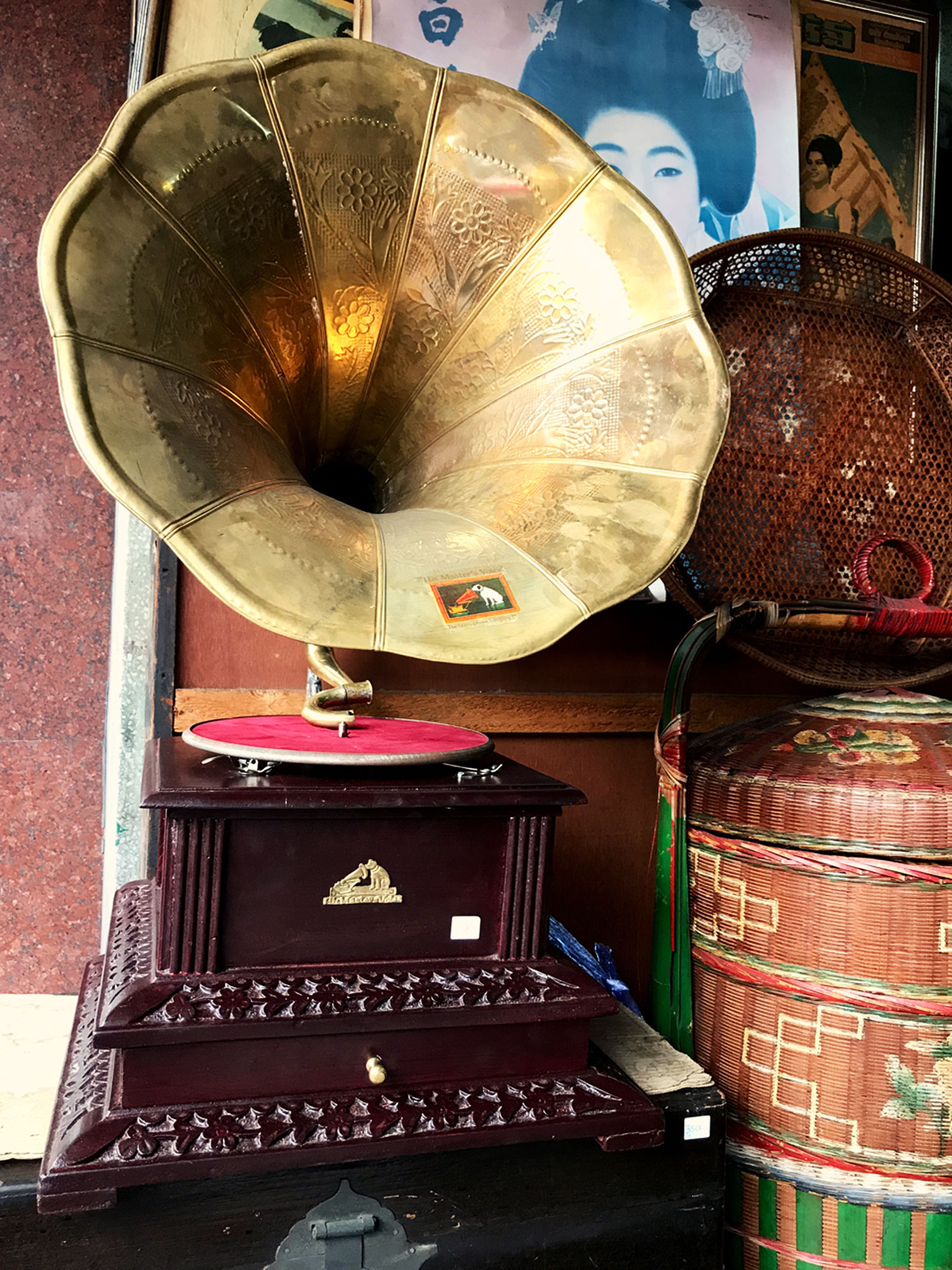 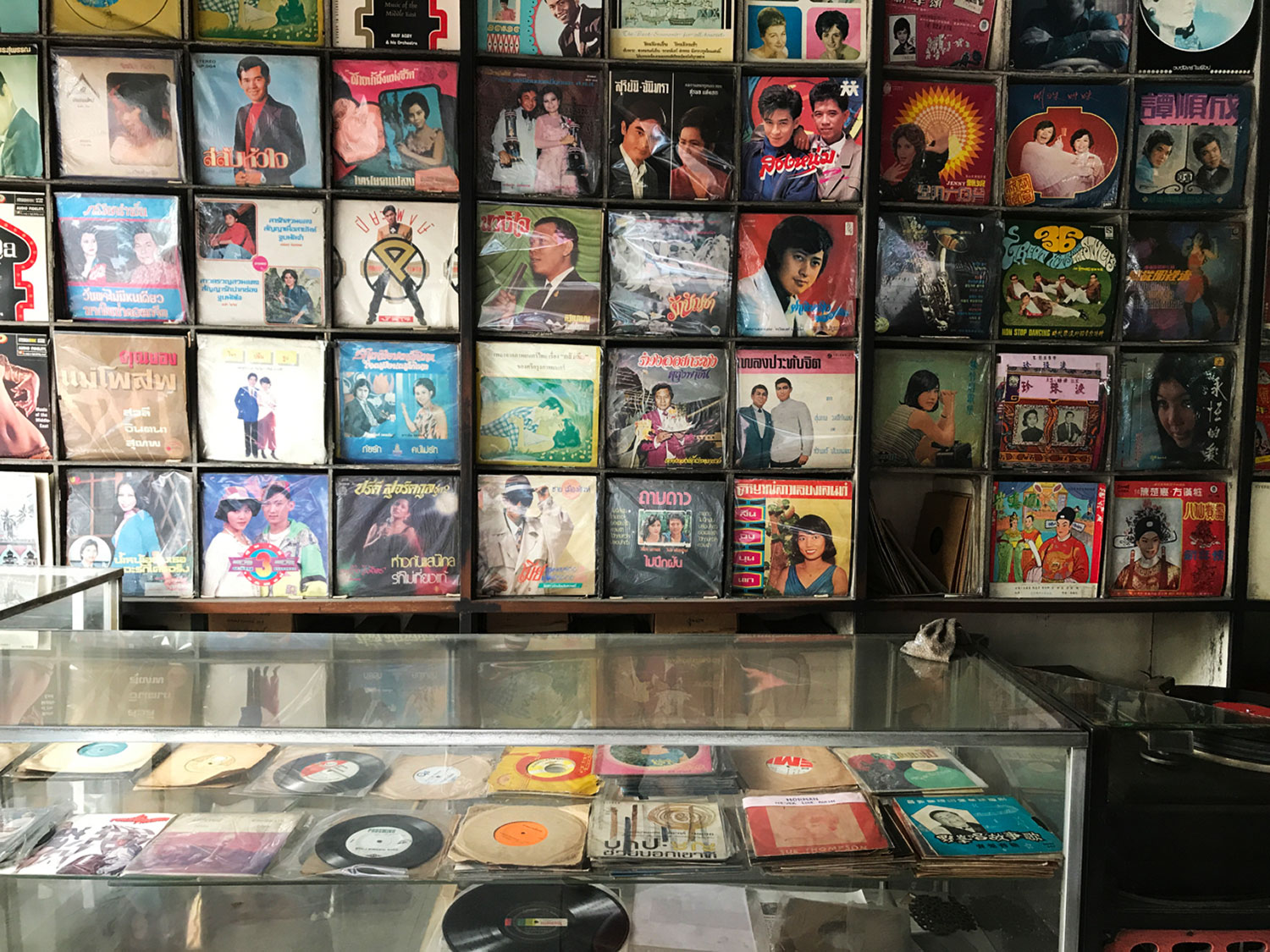 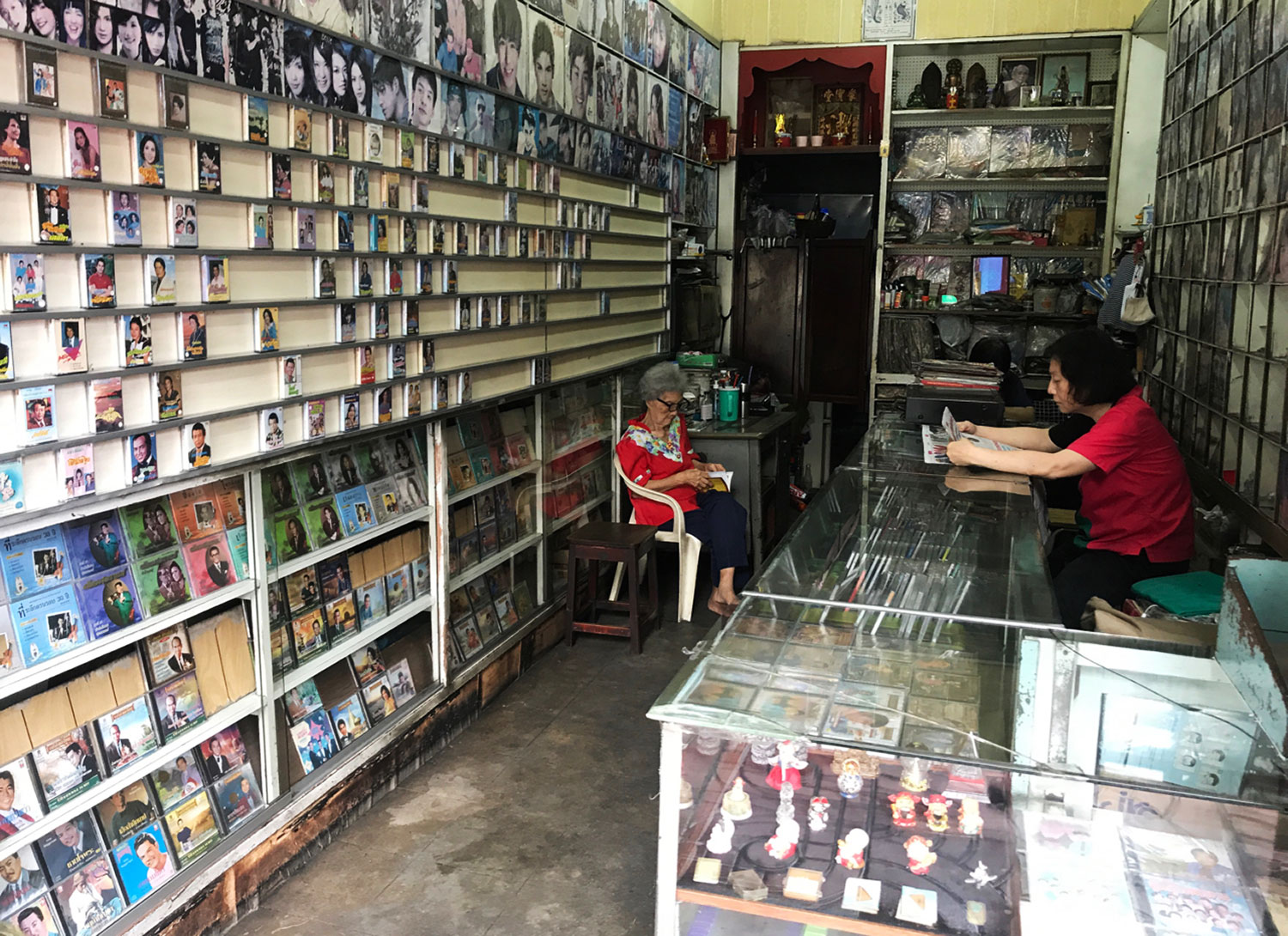 For those who love collecting vinyl records, Wang Burapha houses a number of old record stores along Charoen Krung Road, a short walk from Sam Yot MRT station. In the 60s, the Wang Burapha area was buzzing with fashion-conscious kids and cool places to hang out, like Siam Square today. Some record shops continue to operate today. You can also find classic record players. 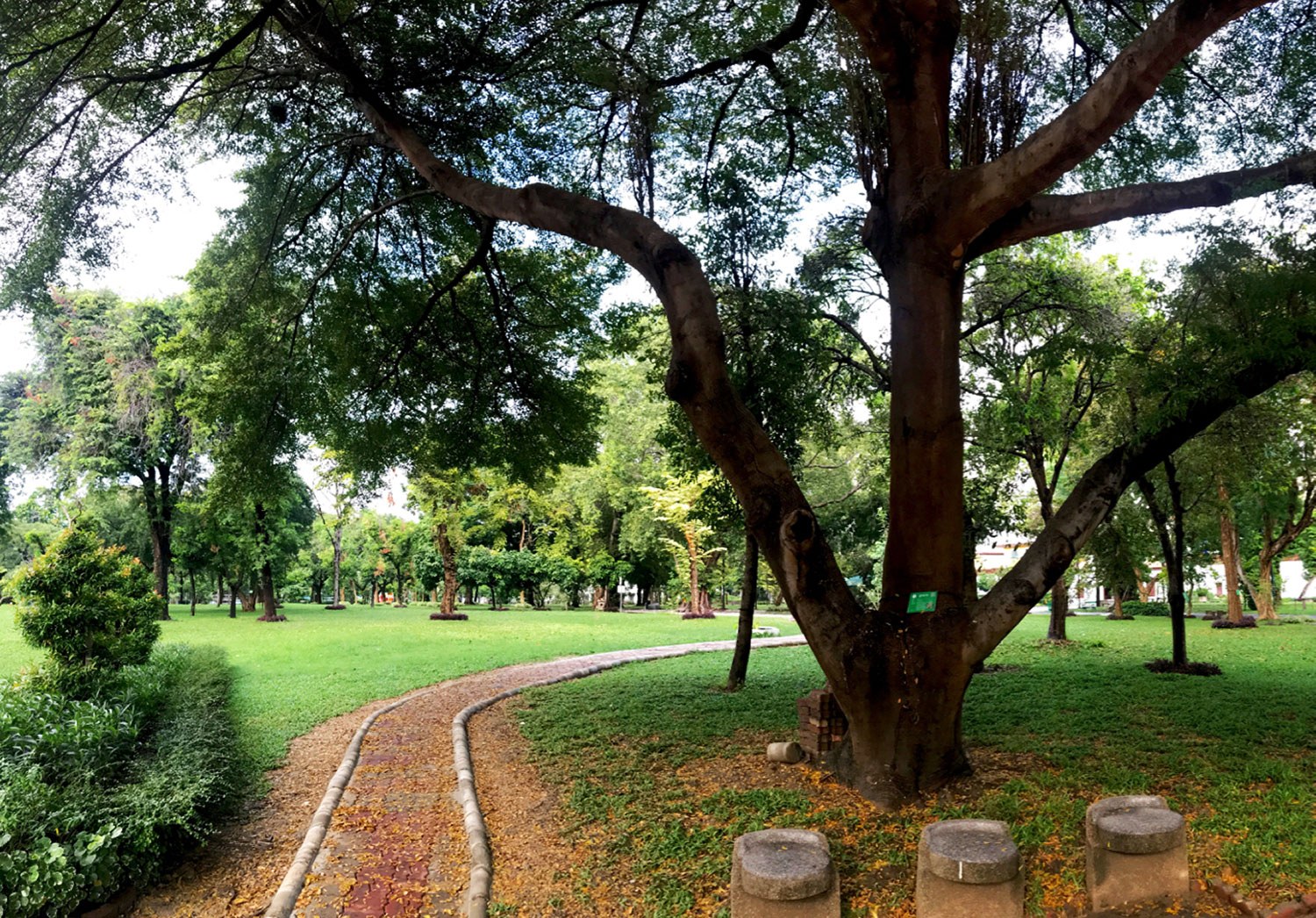 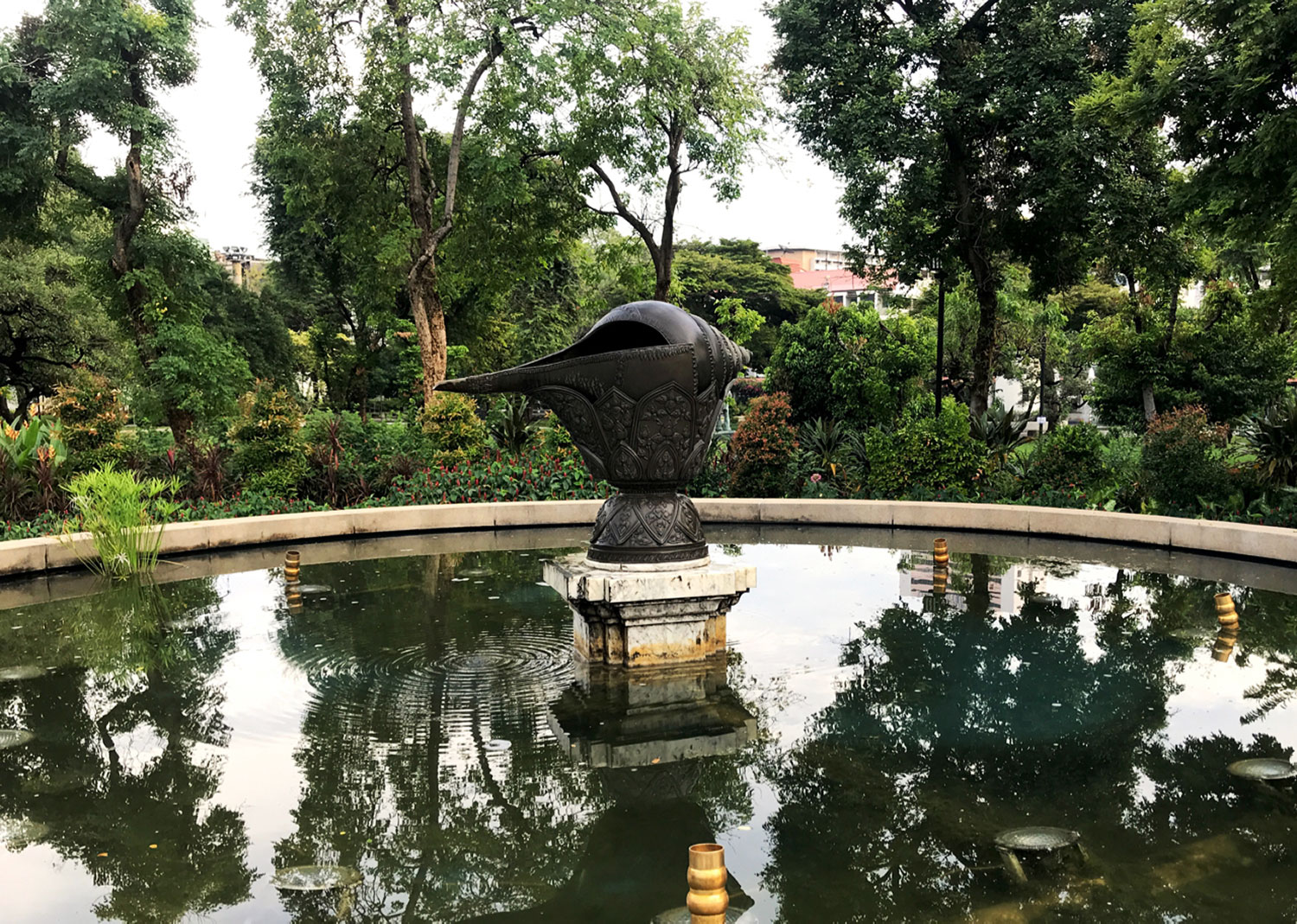 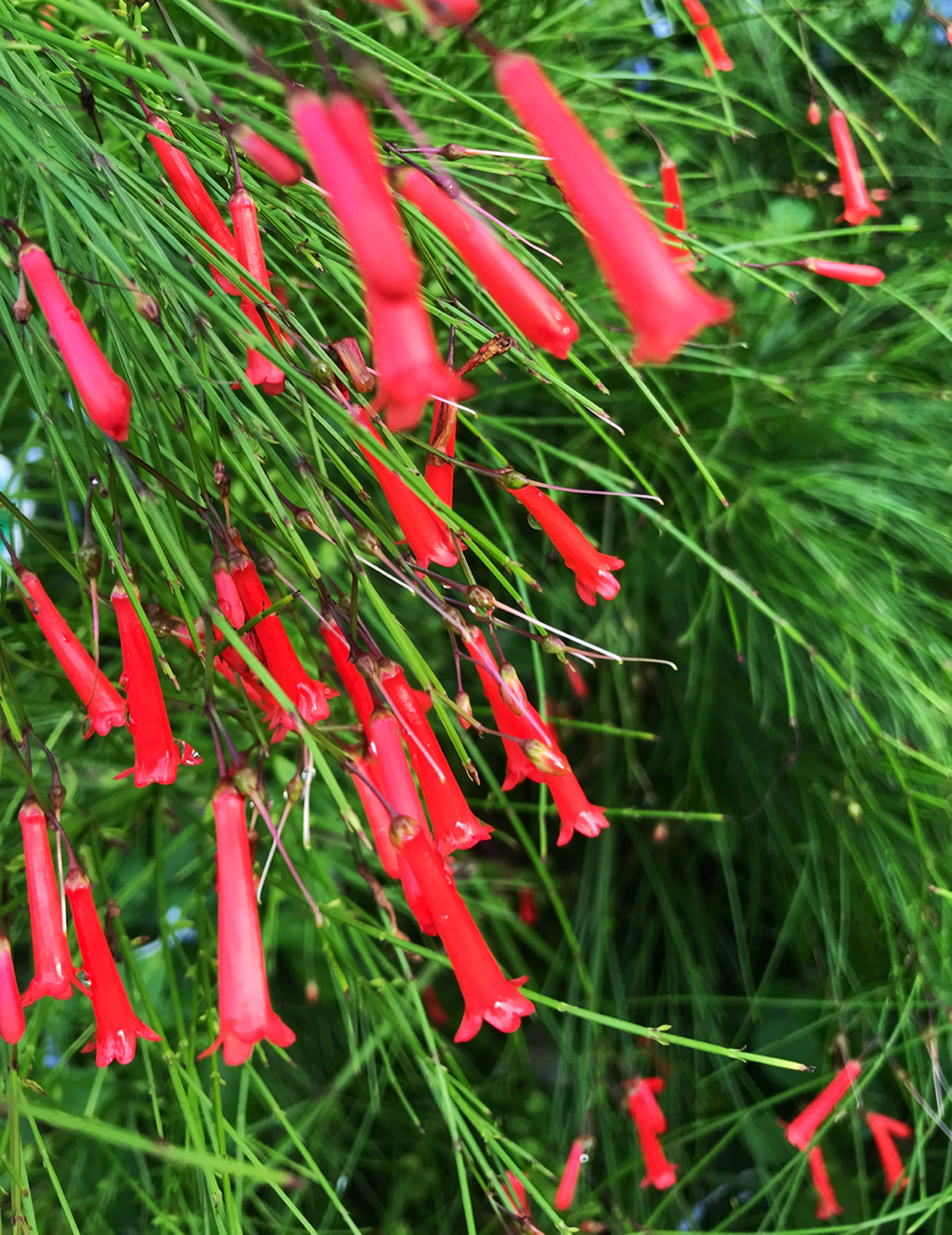 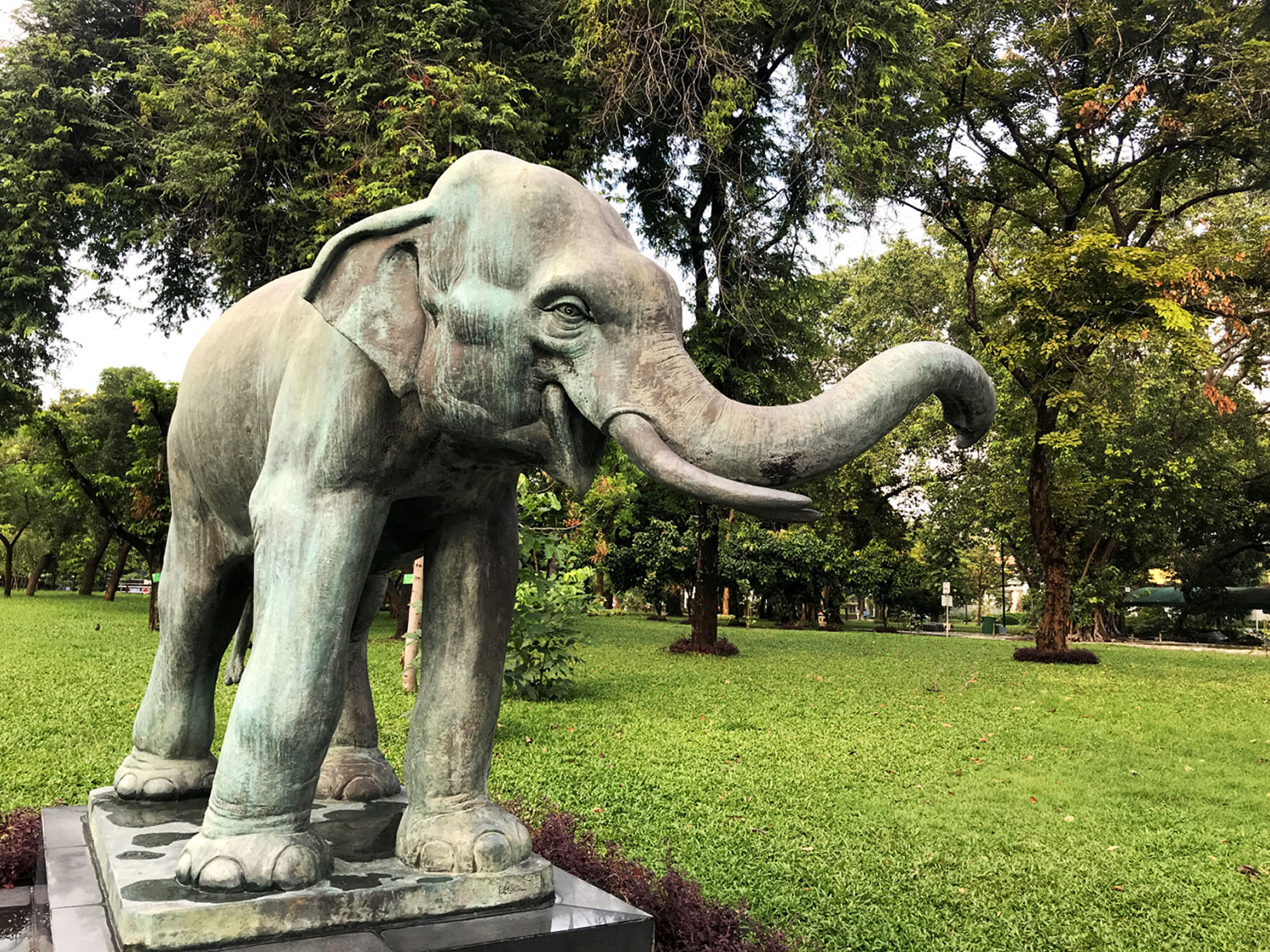 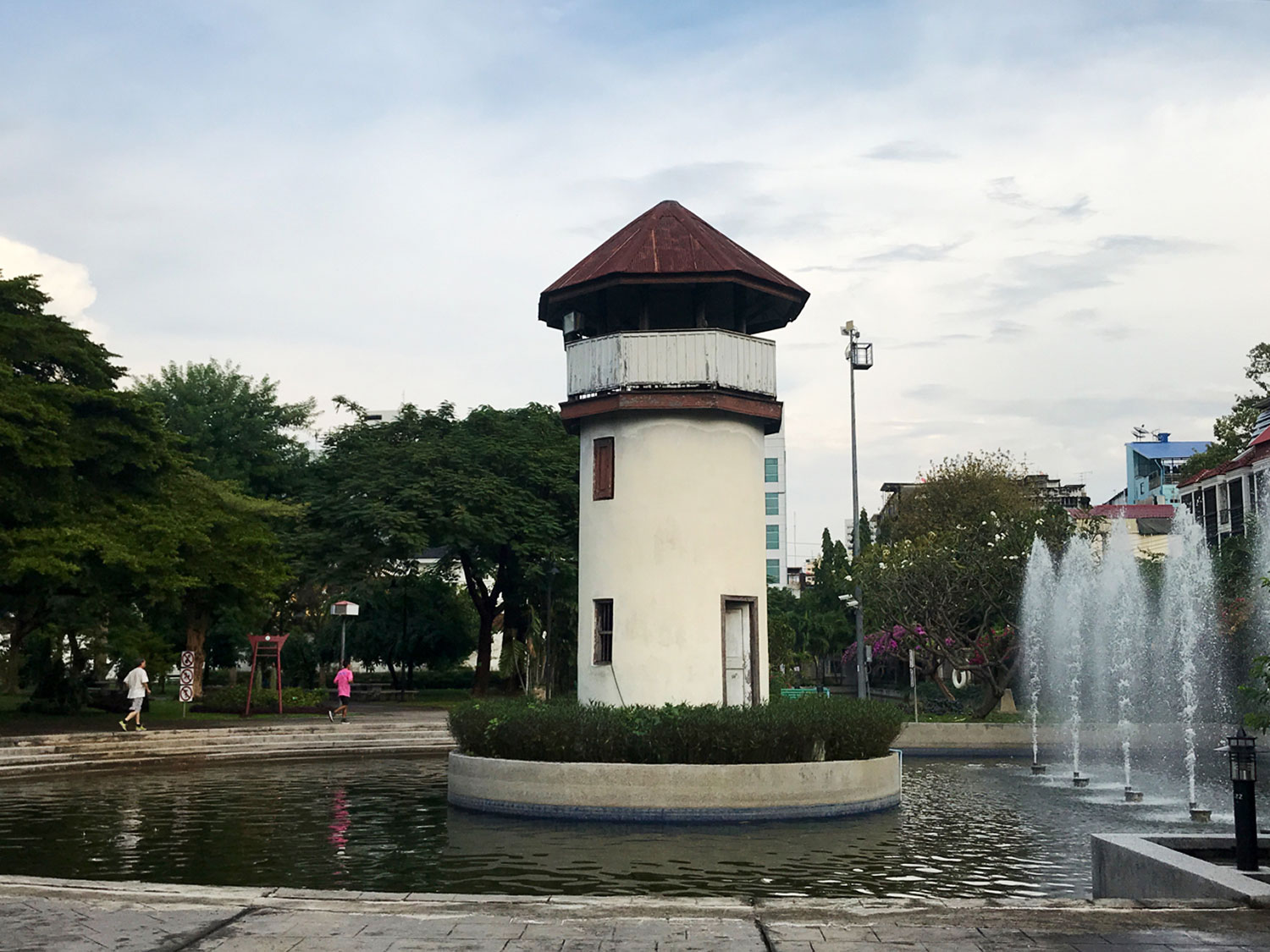 A short walk from MRT Sam Yot station is Rommaninat Park. Located on a 29.3 rai plot of land, the public park formally housed the Bangkok Central Prison, built in 1889 during the reign of King Rama V. The prison was closed in 1991 and renovated into a public park to celebrate HM Queen Sirikit the Queen Mother’s 60th birthday in 1992. The park still houses the prison towers, bronze sculptures of a conch and an elephant, aiming to bring positive energy to the park. The old prison was renovated into a museum but is now permanently closed.

The easiest way to reach the canal is to take the subway and get off at Sam Yot station. Within a short distance, I arrived at the walking street. It was still early afternoon and the neighbourhood was wide open. The crowds don't arrive until the late afternoon, once the stalls selling food and goods set up shop.

As I expected, the colour of the water was green and still stinky. Fortunately, the smell was not as strong as before. The good thing was that my attention was not glued to the smell but the colourful street art lining both sides of the canal, starting from Damrong Sathit Bridge, better known as Saphan Lek Bon or Saphan Lek for short on Charoen Krung Road to Saphan Han, in Samphanthawong district.

I almost forgot about the smell I was so impressed with what I saw -- a flat and wide walkway made of neatly laid out bricks, green trees planted along the canal and bright colours of graffiti art, thanks to the efforts of the Bangkok Metropolitan Administration (BMA) in 2015. It returned the public space by demolishing the Saphan Lek market which was crammed with 428 shops, some of which extended its structure over the canal. The market was known for toys, electronic goods and second-hand products as well as pirated movies, music and video games. The water was polluted. At that time it was hard to imagine that the area was a historic site.

Dating back 238 years when King Rama I moved the Siam capital to the east side of the Chao Phraya River, he ordered a city moat to be built. The moat, or Klong Rob Krung, started from the Chao Phraya River at Santi Chai Prakan Public Park in Bang Lamphu and ended at the area around Saphan Phut (Memorial Bridge). The old city moat also has different names depending on the area it passes including Klong Bang Lamphu and Klong Ong Ang. (It was because in the past, the area around Klong Ong Ang was a pottery market for Mon and Chinese people, according to the BMA). In 1967, the government announced the city moat as a conservation canal. The canal was listed as a historical site in 1982.

In October 2015, the BMA announced a plan to renovate the canal in order to add green space to the city. It took about a month for the BMA to demolish the Saphan Lek market. In November 2015, the BMA made a historical mark by celebrating the Loy Krathong Festival in Klong Ong Ang, to celebrate the success of its first step in adding the green zone. (Those who are looking for toys and second-hand cameras of the old Saphan Lek market can drop by Mega Plaza, a short walk from Phanuphan bridge.)

Some people compared the Klong Ong Ang makeover to the restoration project of South Korea's Cheonggyecheon stream in Seoul. The stream was once polluted and covered with a concrete floor and an elevated highway until Seoul residents forgot about the existence of the stream. In 2003, the Seoul Metropolitan Government decided to reduce air pollution by adding a green zone to the city. The authority demolished the expressway and the concrete floor. It took about two years and a budget of US$386 million to return life to the stream.

Cheonggyecheon stream is one of the popular tourist attractions in Seoul. You can sit along both banks of the waterway and picnic or dip your feet in the fresh and clear water. The level of water is about knee height so children can have fun chasing fish or walking in the stream. That is the real makeover I imagined for Klong Ong Ang.

Today, I would not dare to touch the water in Klong Ong Ang. Although the BMA made the right decision to improve the public space and add value to the historical site, there is still room to even make it better by making the water truly clean. I did not see anyone kayaking while I was strolling along the walking street last week. But I did see the smiles of tourists who were happy taking photos and shopping for snacks.

For me, visiting Klong Ong Ang and its walking street can be an outing for family or friends to go for tasty food, have leisure time and hang out around the old quarter of Bangkok, which turns out to be one of the coolest places in the town today. 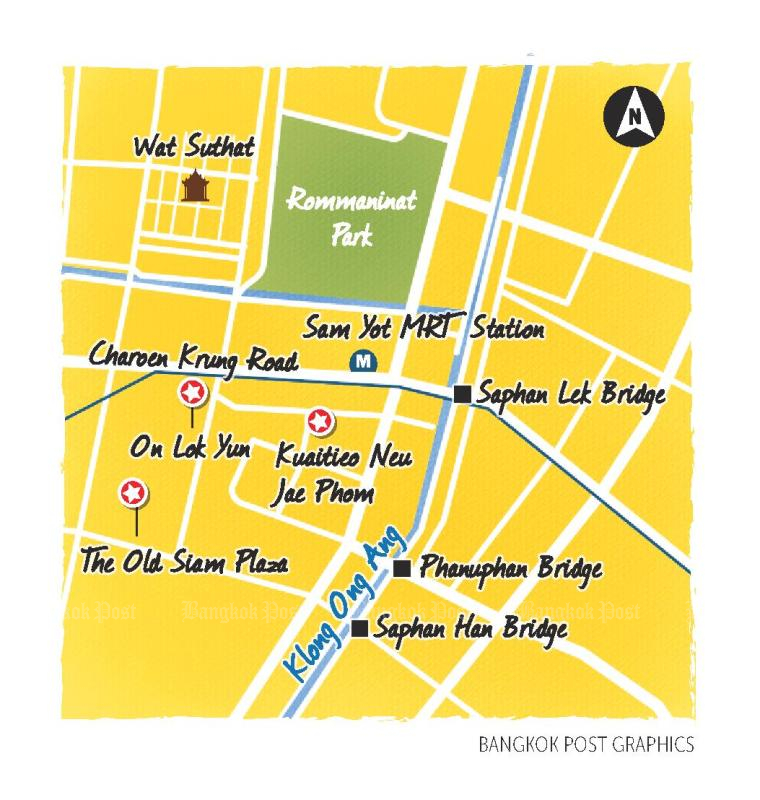