Serving as a stopover for merchants travelling between Isan and Cambodia, Korat today is known for its picturesque scenery, ancient ruins and rich music culture

published : 17 Dec 2020 at 04:00
newspaper section: Life
writer: Karnjana Karnjanatawe
A couple stands on the top of Khao Yai Thiang hill. The place is known for its mountain bike trails during the day and also a place to observe beautiful sunsets and views of Lam Takhong reservoir.

The blue sky gradually turned orange after sunset. The tender wind carried the cool night air to where we stood on the top of Khao Yai Thiang in Nakhon Ratchasima. The grass flowers and tree branches swayed in the breeze.

The colours of twilight reflected on Lam Takhong reservoir below us, making the body of water seem like a sea of fog. The busy lanes of traffic on Mittraphap Road, which leads to the Northeast and runs parallel to the dam, seemed a world away as insects of the night chorused their songs.

"I did not want to believe that Korat had such beautiful viewpoints like this. The cold weather and the picturesque view from the mountaintop made me think that we were in the North," said one of my travel companions. I agreed with her. It was a good surprise. 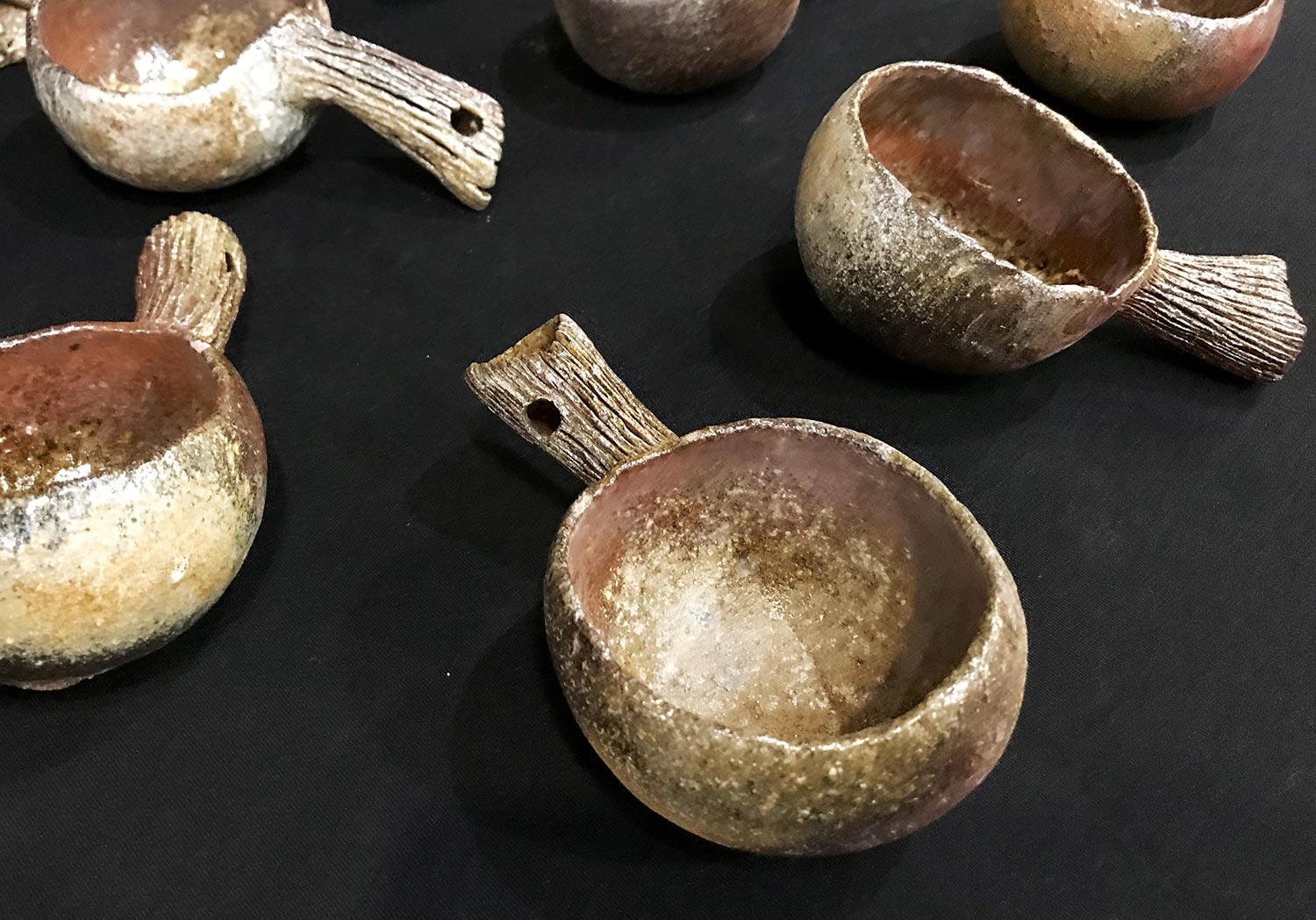 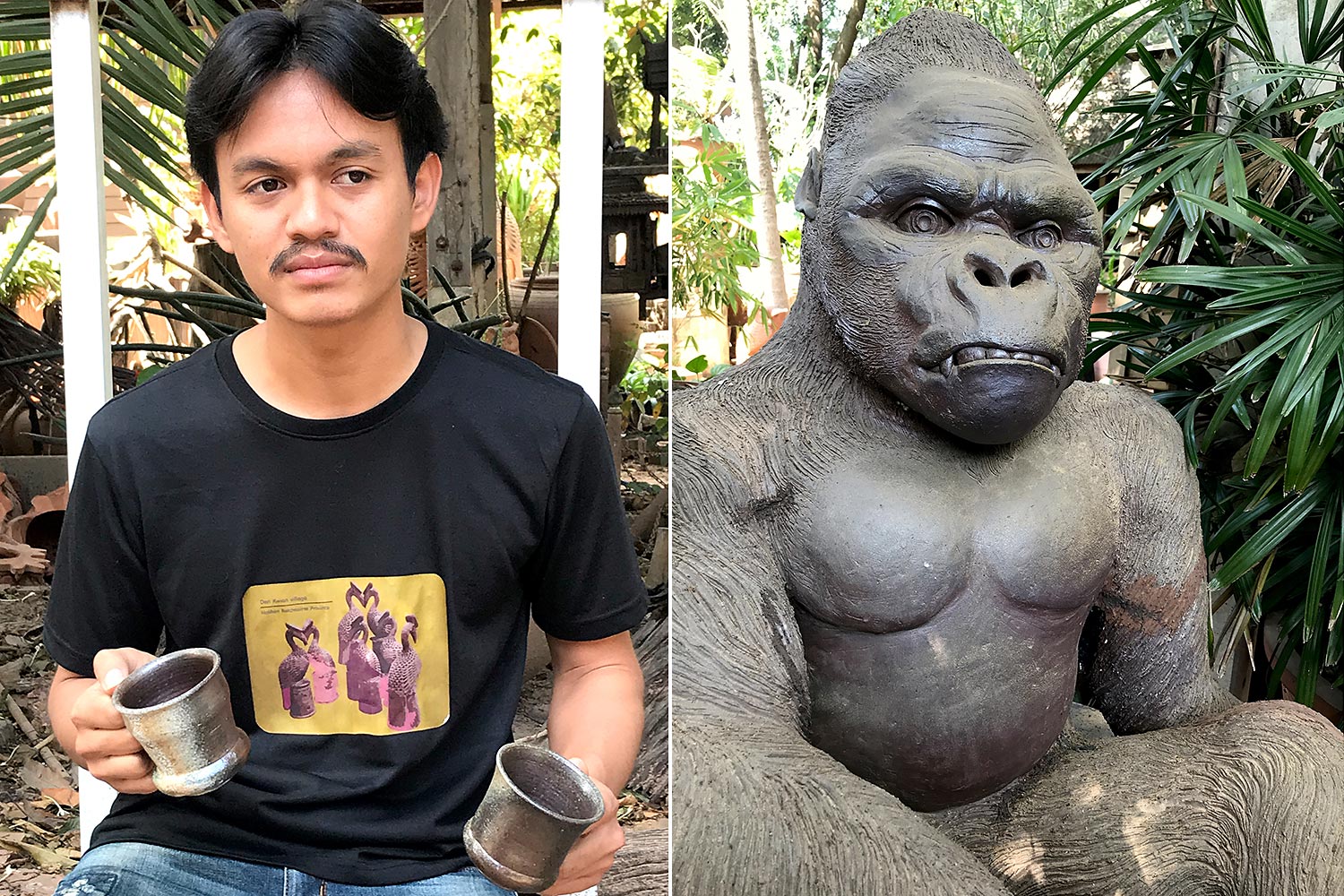 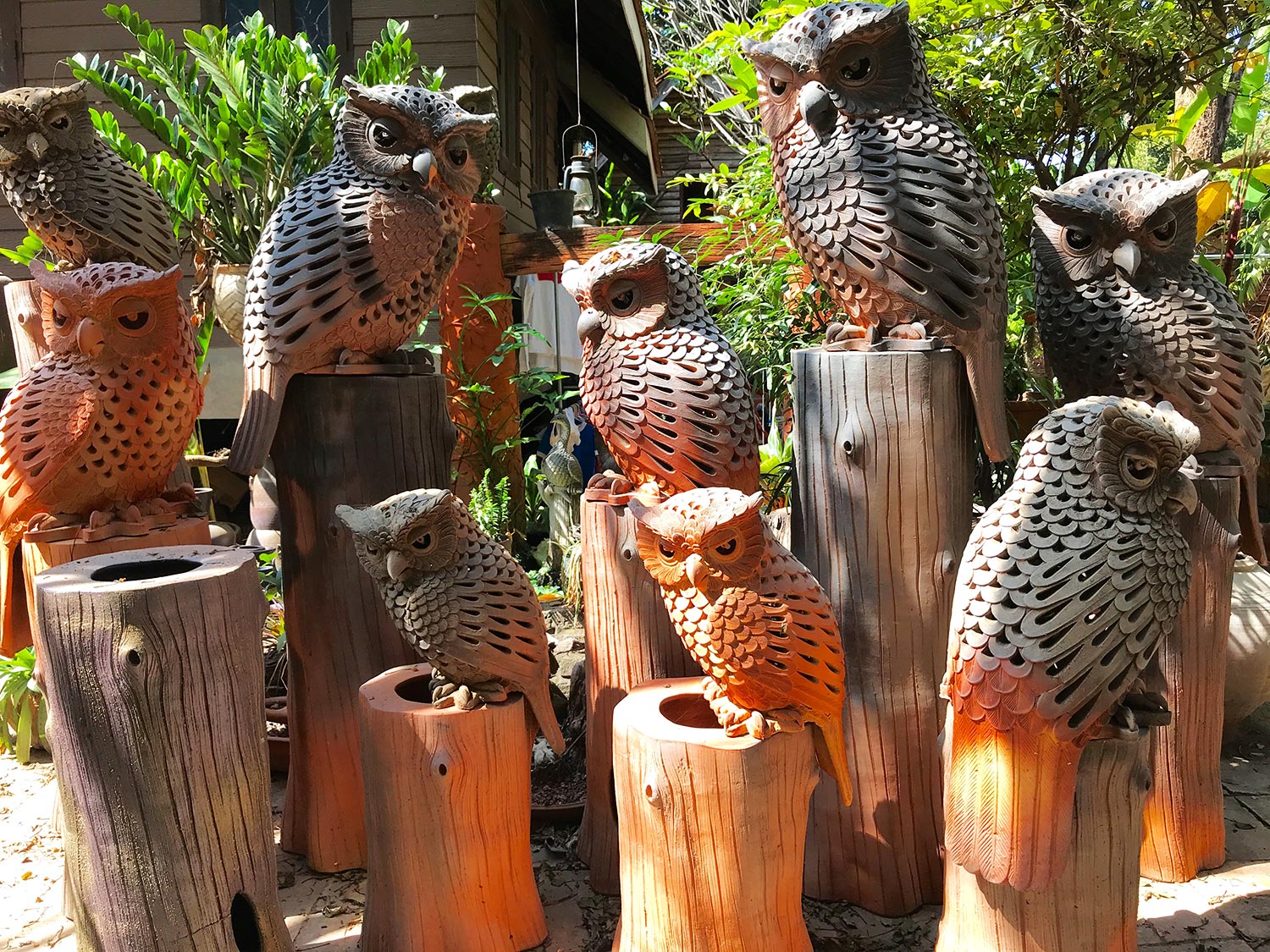 Ponlawat Singthale, 27, is a third-generation pottery maker in Dan Kwian Pottery Village in Chok Chai district. The unique design of his family is an owl sculpture which looks as if it’s alive. In addition, he and his older brother also make lightweight coffee mugs and Oriental-style teacups. Their products are available via the Facebook page Din Ban Eng (type in Thai language) or visit bit.ly/39ZerQr.

Last week, I was in Nakhon Ratchasima, which is also known as Korat for short (it was referred to as "Khonrat" by locals in the past before being changed Korat). My two-day trip was organised by the Designated Areas for Sustainable Tourism Administration (Dasta). The agency has launched a creative tourism campaign in the southern areas of the northeastern region covering five provinces, including Korat, Buri Ram, Surin, Si Sa Ket and Ubon Ratchathani.

"Creative tourism focuses on the engagement of tourists who choose to visit destinations because they want to have authentic experiences with locals," said Dasta acting director-general Chuwit Mitrchob.

"These experiences will leave them lasting memories and a deep understanding of people and the places they visit. This is in line with the behaviour of a new generation of travellers who do not only want to just see, take photos and leave, but also participate in community activities."

The concept of engagement will also encourage locals, especially the younger generation, to preserve their culture so they realise the value of what they have. Creative tourism will bring quality tourists and benefit the development of communities, he said. 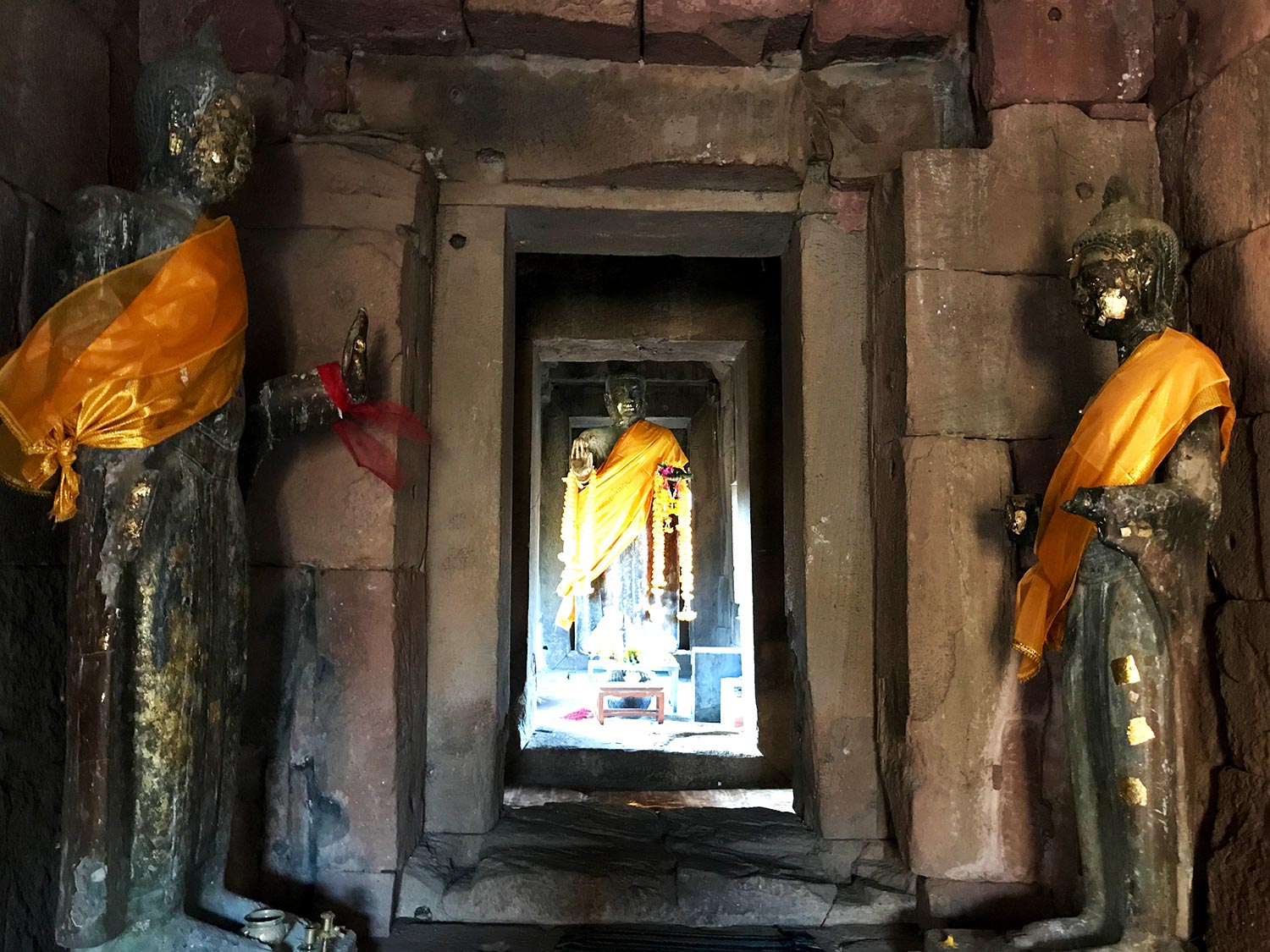 Historians believe that Prasat Hin Phanom Wan was originally built as a Hindu temple by two Khmer kings. The first was King Yasovarman I in 907AD and the other was King Udayadityavarman II who rebuilt the main chapel with pink sandstones and constructed a colonnade (rabiang kot) surrounding the temple in the 11th century. During the reign of King Jayavarman VI (1080-1107AD), the temple was known as Prasat Dheva Som or the shrine of the deity. It was used for ritual ceremonies while the king built a new Hindu temple known today as Phimai Historical Park. The site was turned into a Buddhist temple during the Ayutthaya period. The ancient temple underwent a major renovation in 2011 by an archaeological team from the Fine Arts Department. At present, the ruin is still a sacred place for locals and it houses Buddha images, ancient Khmer inscriptions and lintels. 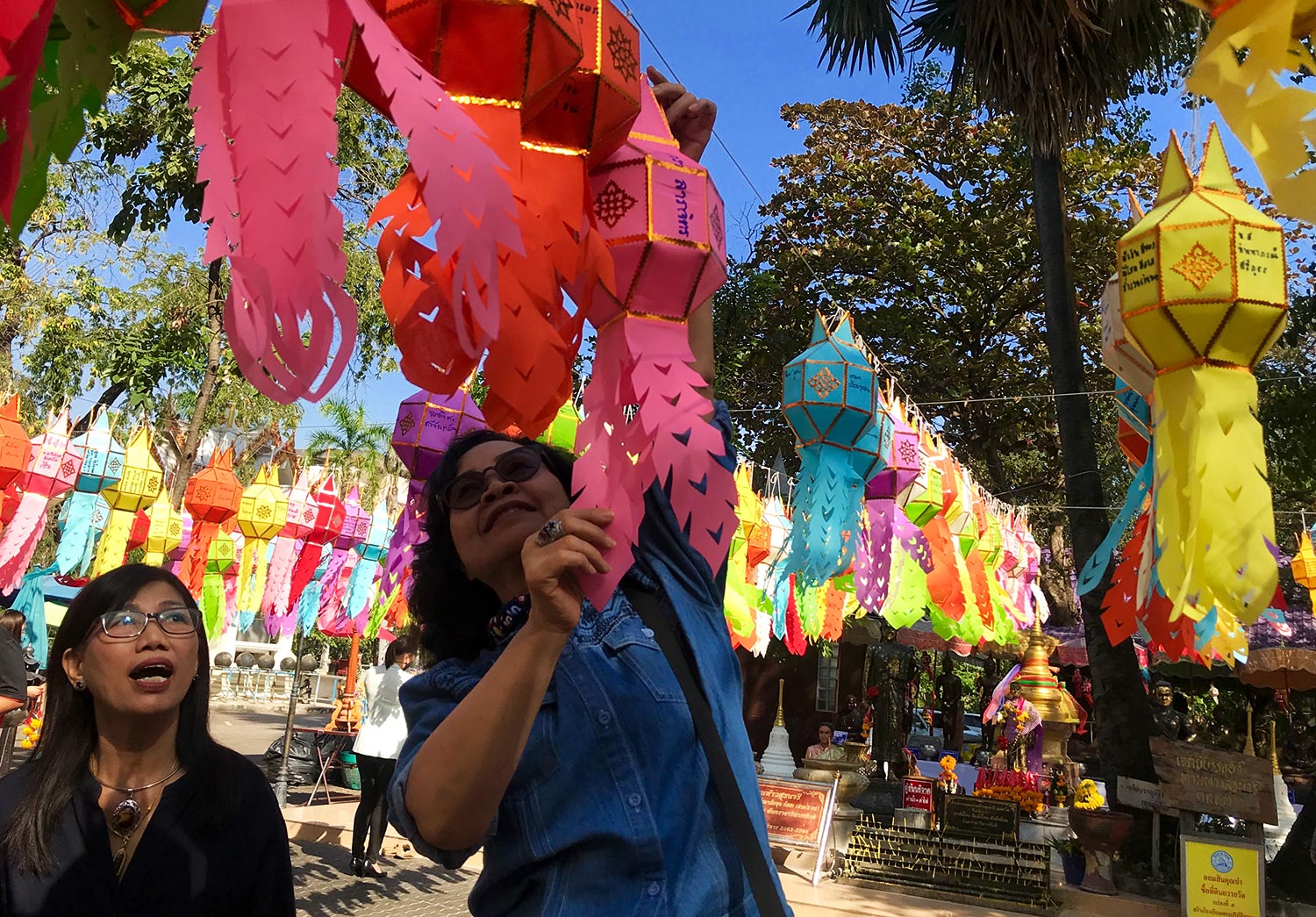 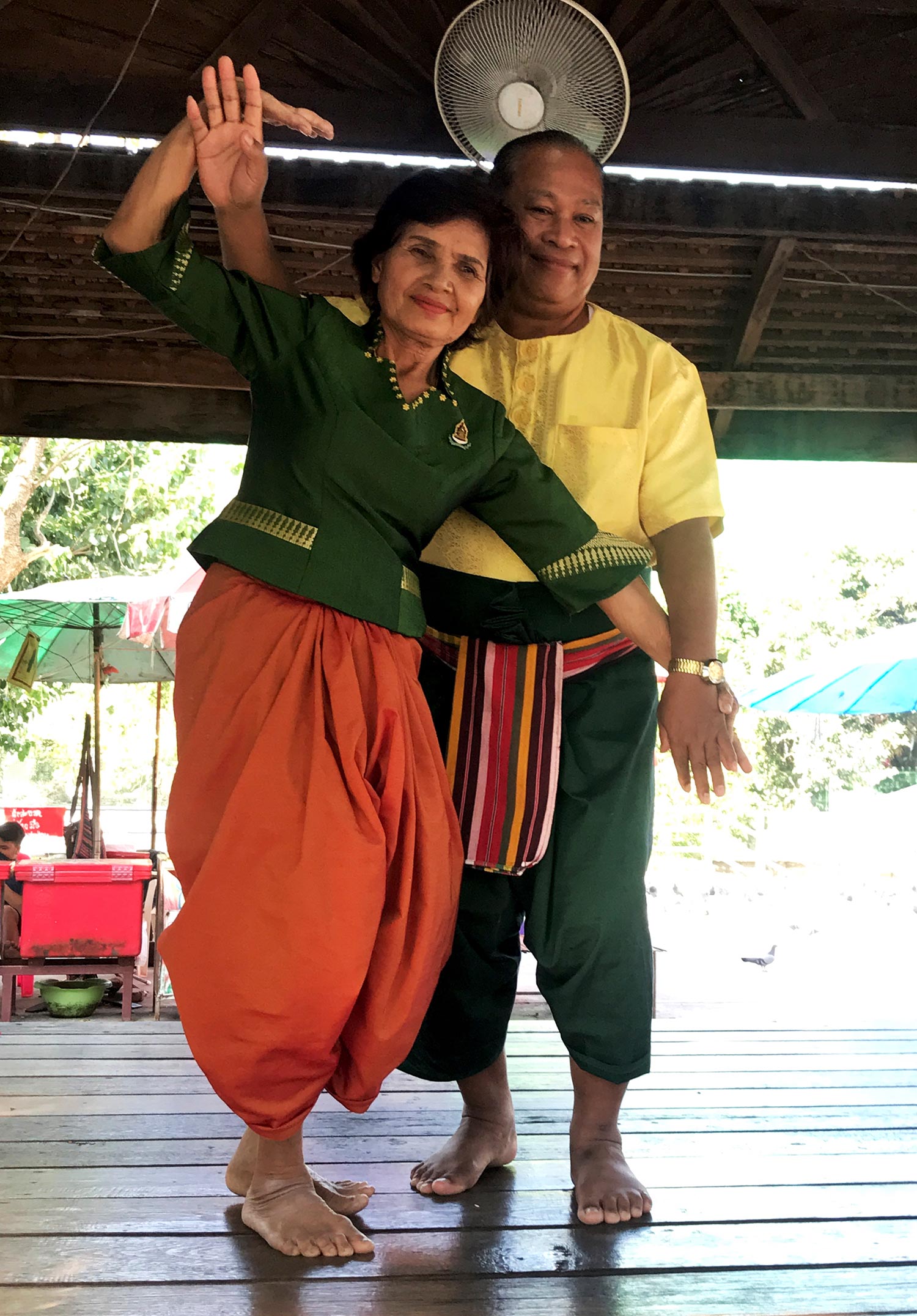 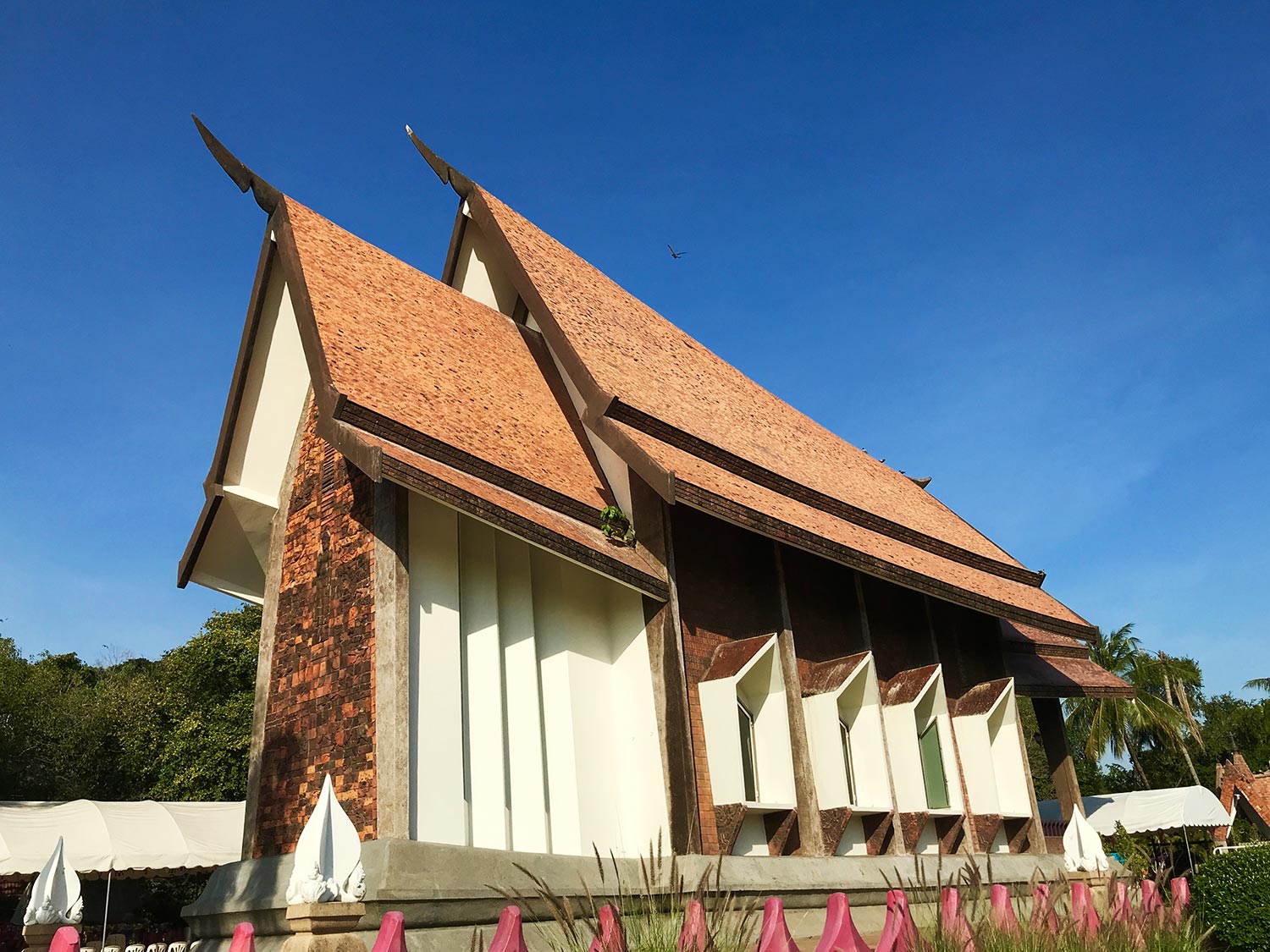 Wat Sala Loi is one of the sacred sites in the city of Korat because people believe that the ashes of Ya Mo are stored in the golden pagoda on the temple grounds. Worshippers visit the temple to ask for her blessing, and some also write their wishes on paper lanterns and hang them in front of Ya Mo’s statue. The temple is also one of a few places where you can see the Phleng Korat performance, a traditional song and dance performed by a team of two males and two females. Bunsom Sangmeesuk and Lamyai Panich, the masters of Phleng Korat, demonstrate how they sing the poems in the Korat dialect. Locals believe that Thao Suranari liked the song so there are two small stages in the temple ground for worshippers to offer a performance to Ya Mo when their wishes come true. 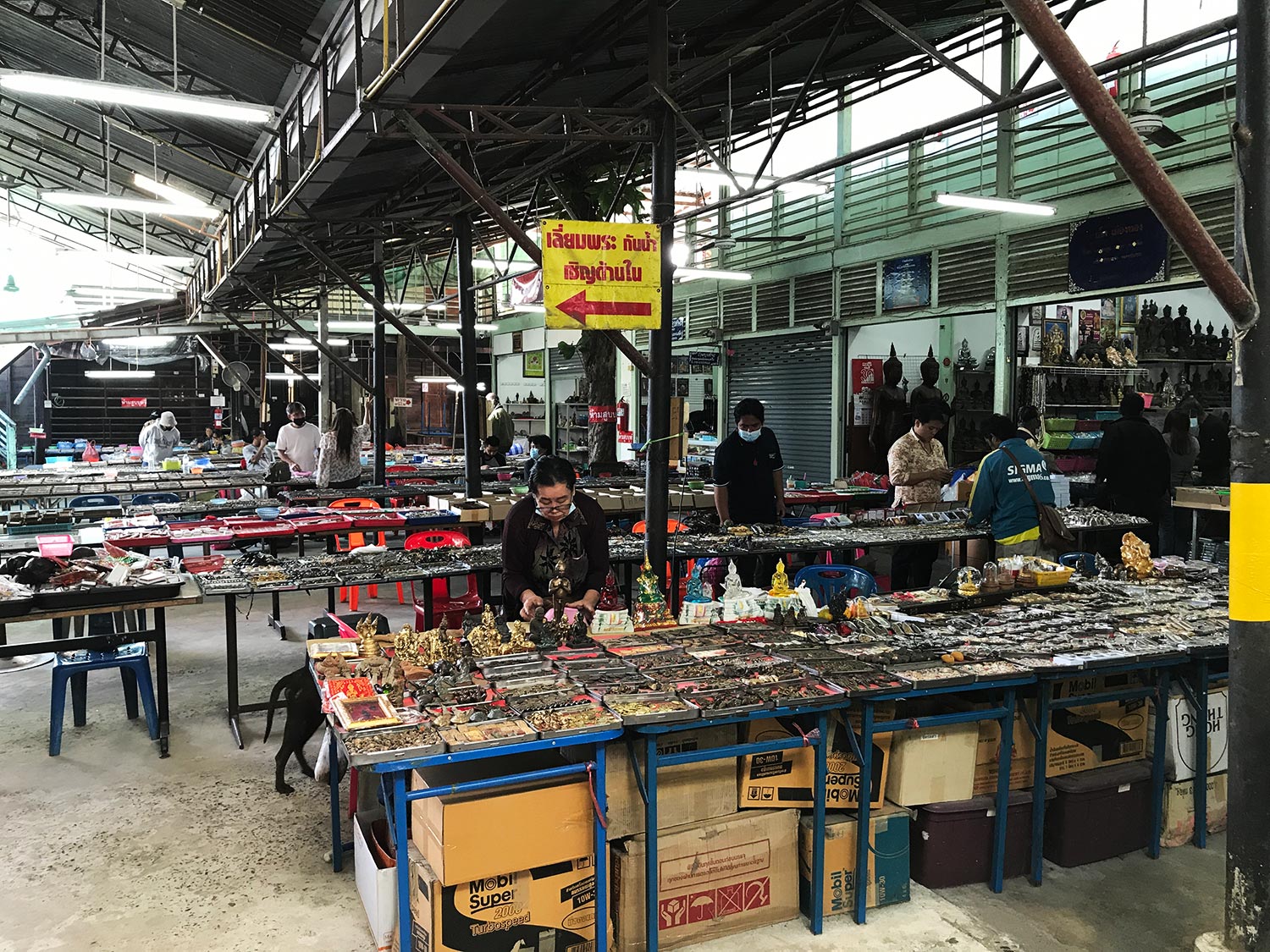 Located on Chumphon Road across the street from Thao Suranari Monument, Muang Thong Hotel was the first in the city. It was opened in 1941 by the Mekvichai family. Its old wooden structure is eye-catching because it contrasts with concrete buildings nearby. Although the signboard of the hotel still remains, hotel service stopped many years ago. At present, the ground floor of the hotel is one of many large markets selling Buddha amulets. You can stop by to observe the structure but you are not allowed to go to the upper floors because access has been blocked for safety reasons.

Our first activity was to learn how locals made pottery in Ban Dan Kwian, located in Chok Chai district about 10km west of the downtown Korat.

In the old days, Ban Dan Kwian was a stopover for merchants who travelled between the lower parts of Isan and Cambodia. They used oxcarts or kwian for transportation. During their stays in Ban Dan Kwian, the merchants also bought earthenware from locals as the products were known for being durable and of good quality.

At present, there are many shops along national Highway 224 that leads to the village as well as in the village itself. We stopped at the house of Mien Singthale, who was honoured as a master of pottery from the Support Arts and Crafts International Centre of Thailand in 2018.

His son Ponlawat Singthale received us and shared the secret of Dan Kwian pottery. The family has made pottery for three generations using clay from the banks of the Mun River. After kneading and sculpting the clay, the items are placed in a traditional kiln at 1,200C. The ware will not be glazed or painted in colours but instead, each pot will have natural colours ranging from terracotta to a rusted brown tone. The Singthale family arranges pottery workshops for all those who are interested.

Our next stop was to learn how locals sing the Phleng Korat, or Korat song. The song can be heard every day in the area of Lan Ya Mo or in the grounds of Thao Suranari Monument and the Sala Loi temple where the ashes of Ya Mo, a local legend during the period of King Rama III, are stored. According to Bunsom Sangmeesuk, 60, the president of Phleng Korat Club, the songs are unique to the province because of the use of local dialect.

"To sing this song, you need to cover your right or left ear with your hand so that you can listen to your own 'O' voice. It will make you concentrate on what you are singing," he told us.

He paired us with Lamyai Panich, 63, a master of the Phleng Korat, to teach us how they perform. They sang the songs in rhythm, which reminded me of phleng choi or traditional folk music, however, the Korat song is sung without musical instruments. Phleng Korat tells not only pastoral stories but also the current situation such as the Covid-19 pandemic and tourist attractions in Korat. The masters use their witty and improvised verses to make the songs engaging.

"Phleng Korat can be performed for any celebration or event except for wedding ceremonies," said Lamyai. There is no specific reason, but simply because people do not do it, she added.

The Phleng Korat Club is providing anyone interested with a chance to learn how to sing Korat songs. They can also prepare traditional costumes, shirts for men and blouses for women, and chongkraben or traditional Thai pantaloon-like trousers for learners.

Our last stop was Prasat Hin Phanom Wan, the ancient Khmer ruins in Ban Makha in Korat city. We met a group of senior performers who had named their group "Ram Thon Phan Pi" due to the combined ages of its 40 members, said the group president Witthawatchai Champhapho, or Ya (granny) Pik.

Although she is just 35, she is called granny because she is a spiritual medium for the community. Ban Makha village is known for its traditional performance called ram thon, which is performed using a thon or a traditional drum to provide rhythm. Ya Pik learnt ram thon when she was a kid. Today, she has opened her home as a learning centre where visitors can try hitting the drum in either slow or fast beats and dance with the seniors in the style of ram wong or exercising movements, she added.

Although I have been to Korat several times, every time I visit, I have the chance to learn new things. I am sure this trip will not have been my last. 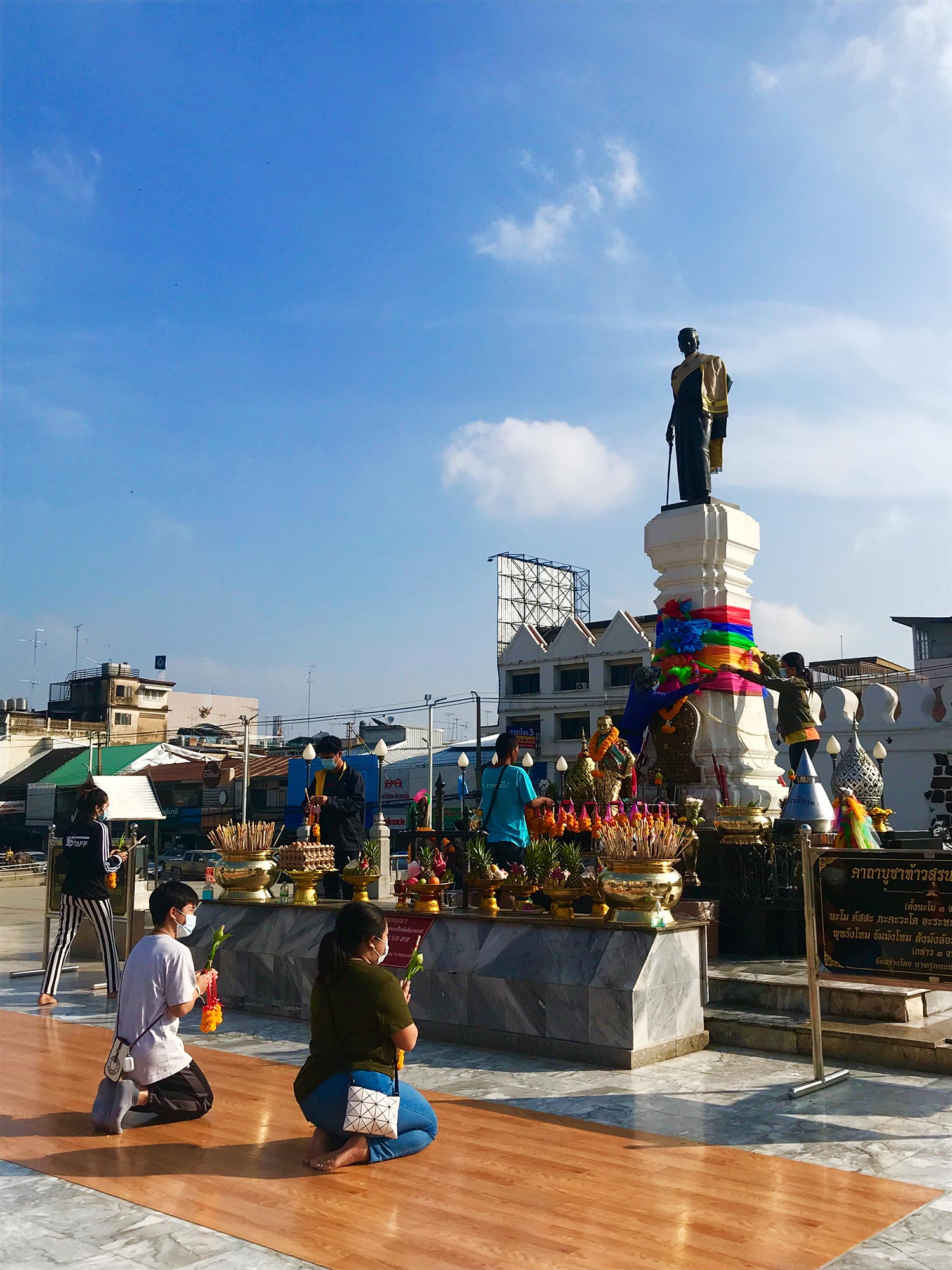 Built in 1934, the Monument of Thao Suranari or Ya Mo is a must-visit when you are in Korat. The place is always crowded with locals and visitors who want to pay homage to Thao Suranari for blessings. People believe Ya Mo will always grant their wishes, except for asking to be exempt from military service since Ya Mo was highly respected and led her people to rise up against Lao invaders and saved the city during the reign of King Rama III. The monument also has a small replica of Ya Mo for worshippers to press thin gold leaf or offer flower garlands. 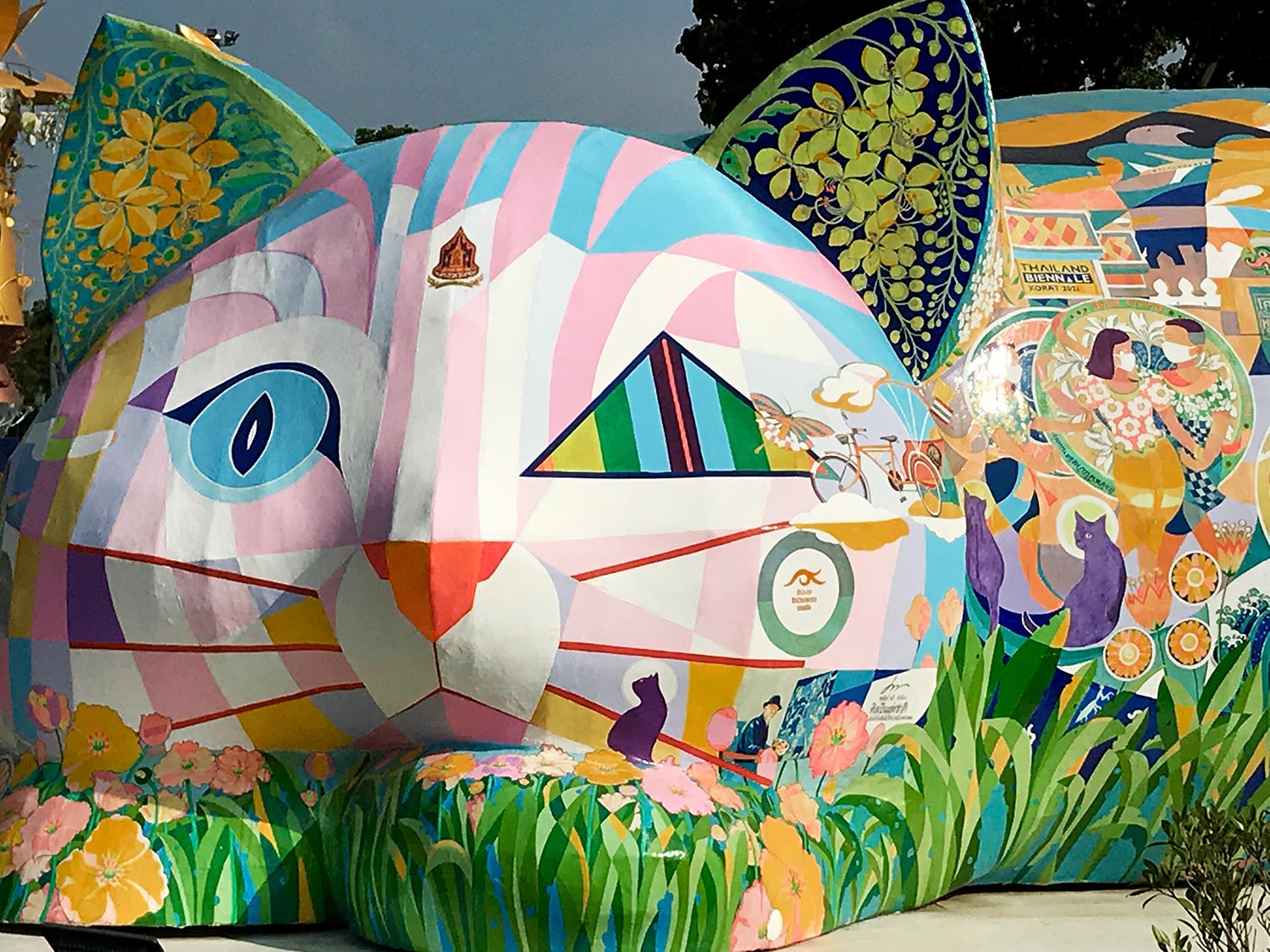 Colourful cat sculptures were created by the Nakhon Ratchasima Provincial Cultural Office this year to highlight the Korat cat. The local breed is maeo si sawat or a silver-blue, short-haired and pointy-eared feline. The three large cat figures can be found in Suan Rak Par, a stone’s throw from the Thao Suranari Monument. 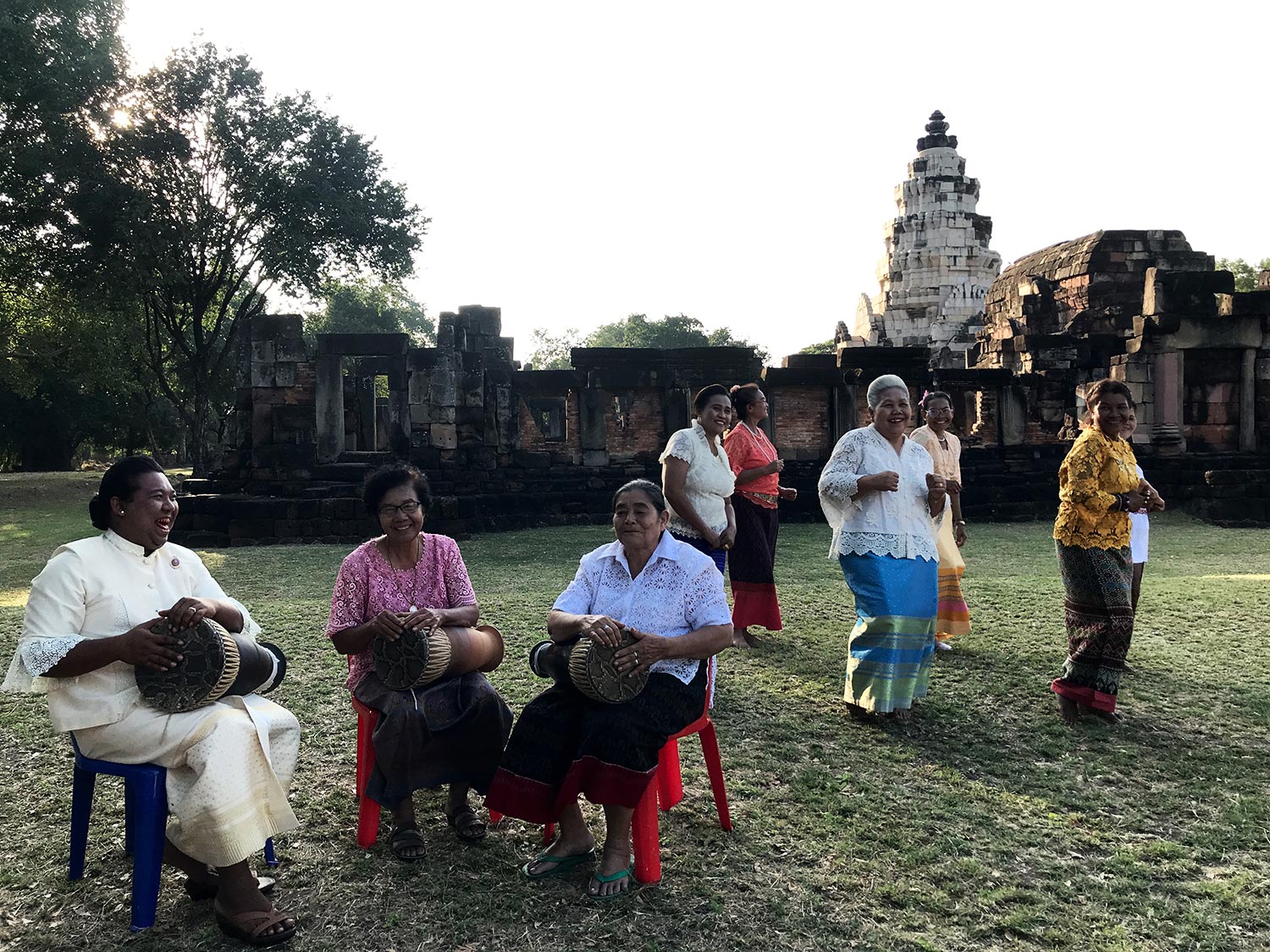 Ram thon is one kind of ram wong or traditional folk dance. The performance needs only a thon or drum, which is not made of wood but fired clay with a head of snakeskin. The drum is heavy and traditionally played by women for ceremonies and celebrations such as Songkran, marking the beginning of rice planting or harvesting seasons. Ram Thon Phan Pi is the name of this band in the Ban Makha community Muang District. The group has operated for three generations and they organise performances in the village or at Prasat Hin Phanom Wan, the ancient Khmer ruin which is about 1km from the community. 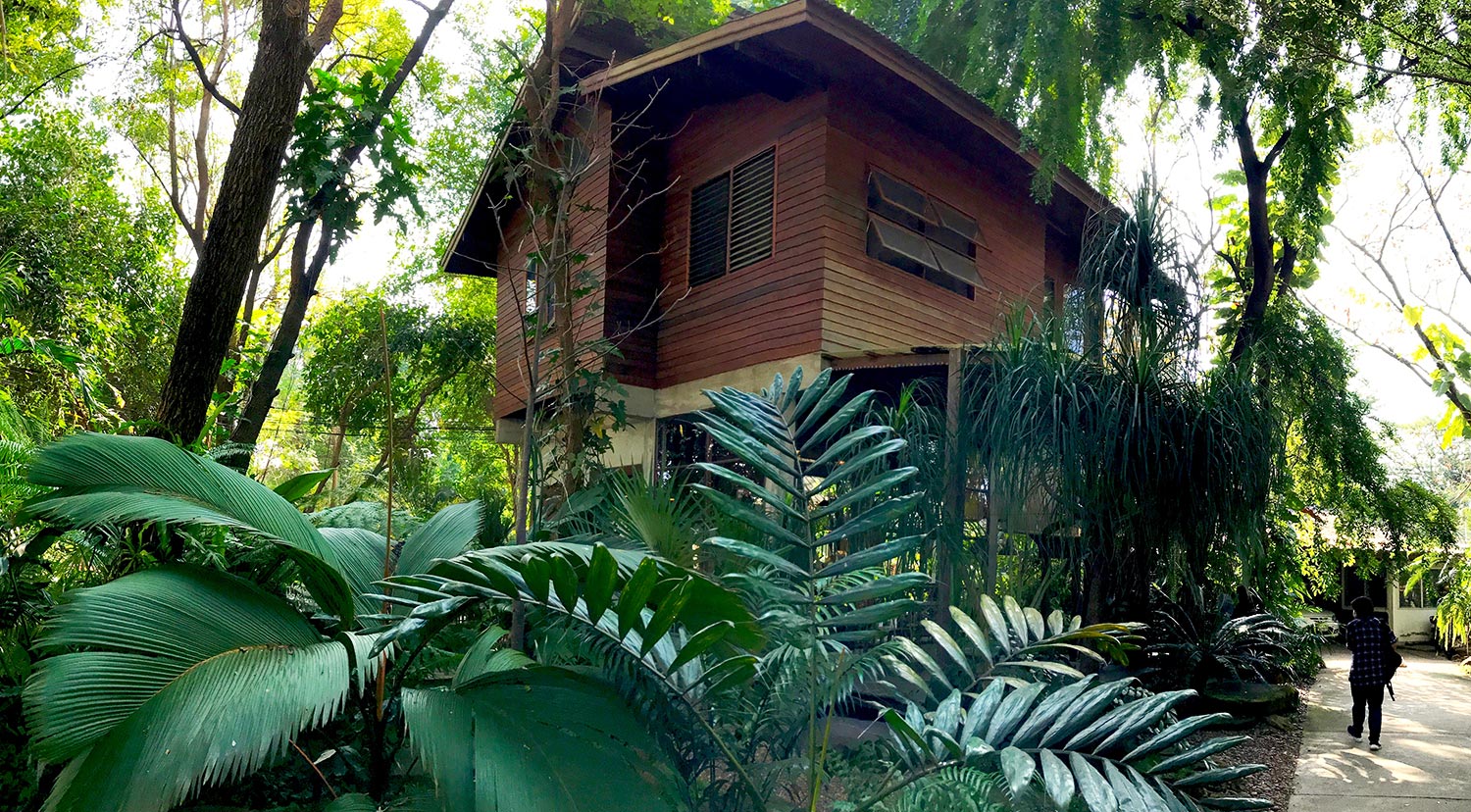 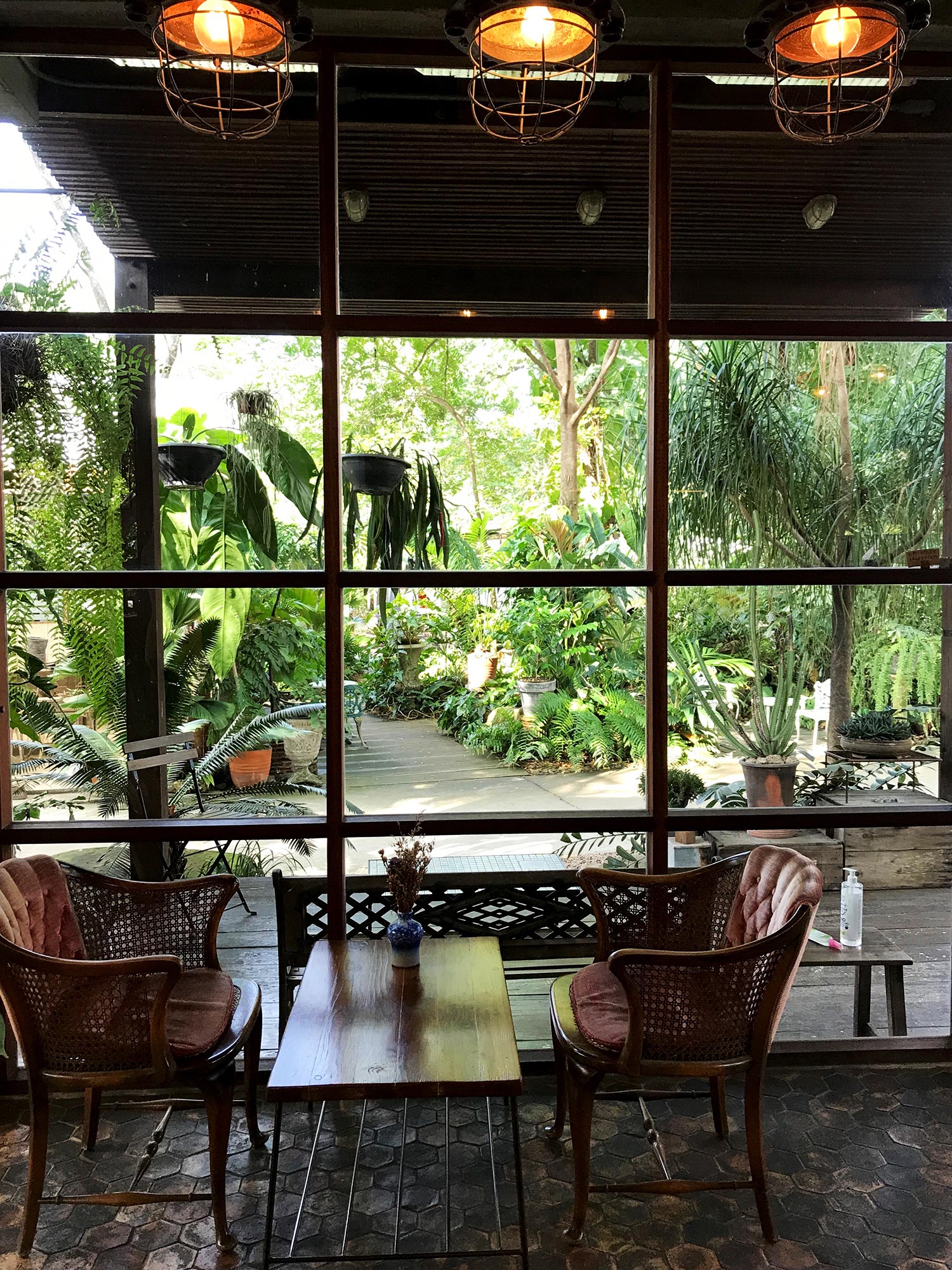 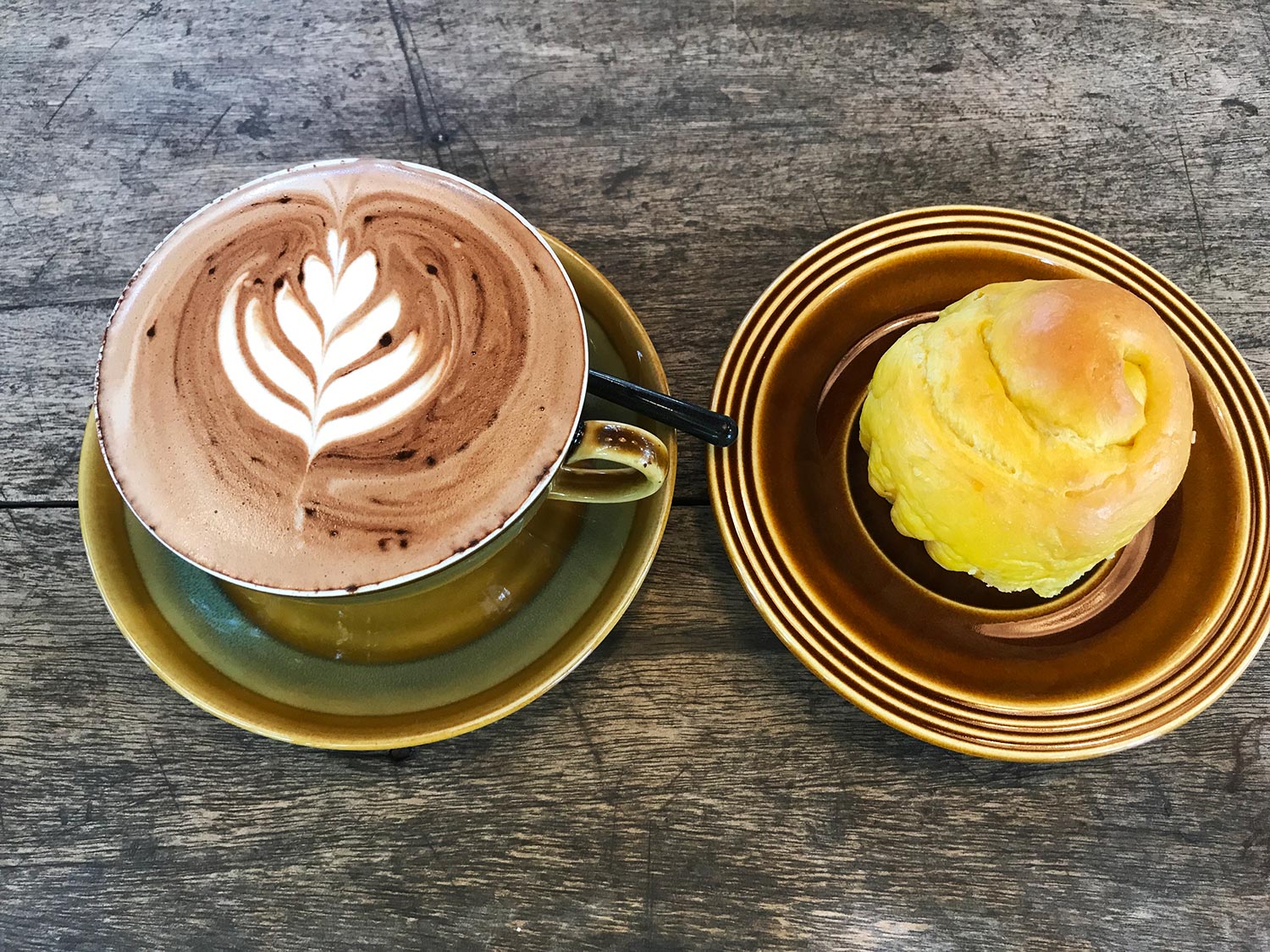 Recommended by locals, our group stopped by 382 Space Coffee shop in the city. It is located in the small Thao Sura Sam soi. Surrounded by tall trees and decorative plants, the cafe is a pleasant place to rest. In addition to brewed coffee, it also serves cakes and pastries baked with organic eggs from its own hens. Thanks to its friendly owners, the cafe will make you feel as if you are visiting a relative’s home. 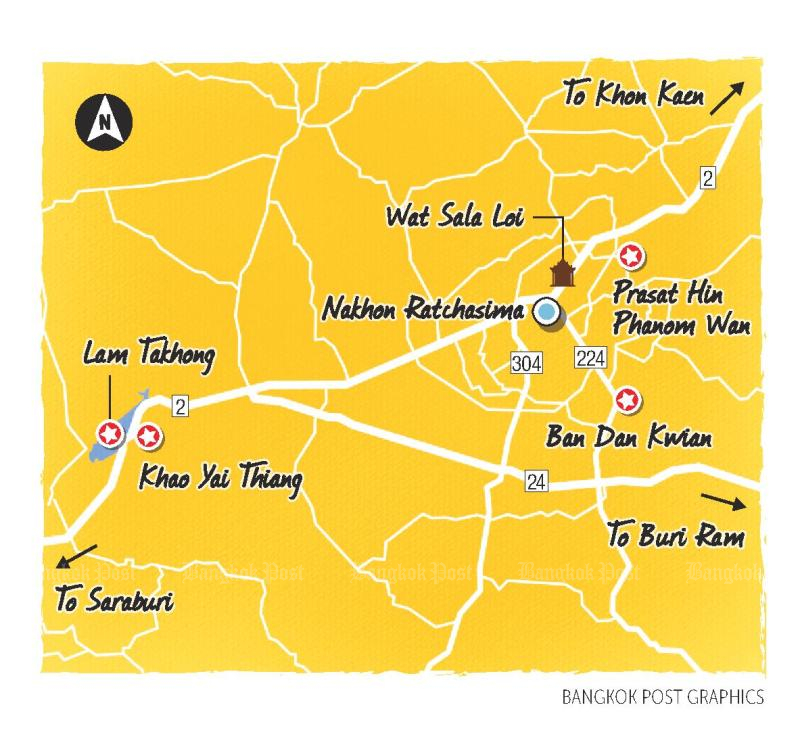