I'm no fan of paintings but I understand folks who are able to enjoy a visual feast by masters such as the likes of Michelangelo, Leonardo Da Vinci or Vincent Van Gogh. I do the same every time I find myself in a magnificent landscape. Indeed, Mother Nature is my favourite artist. 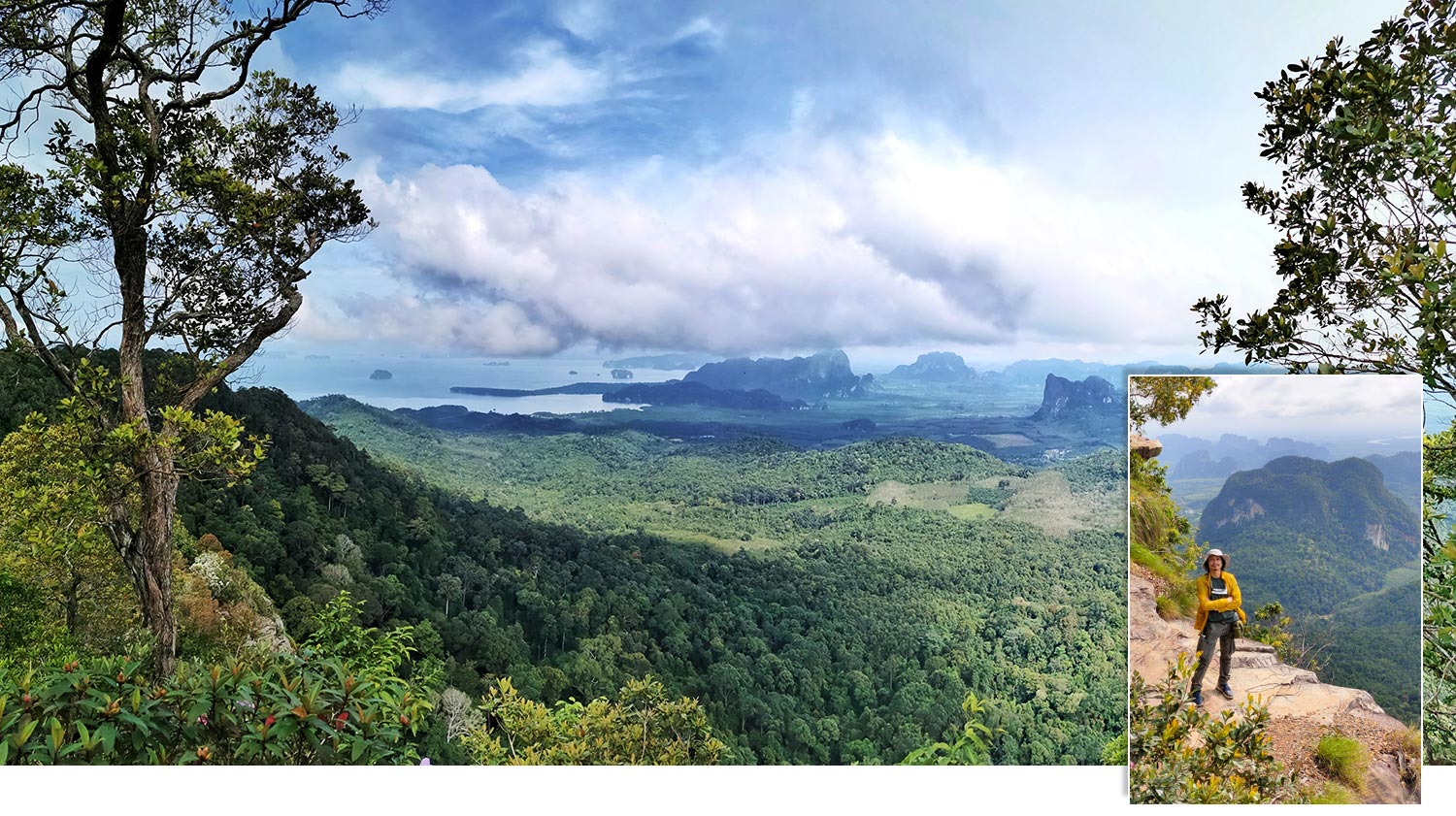 The views from several spots on the peak of Khao Ngon Nak are some of the most spectacular that Krabi has to offer. Few photographs can do justice to the real thing, certainly not any that I took. The main picture, which was shot from a north-facing outcrop, shows the lush forest cover that extends from the mountain to the lowland, karst formations, the bay of Tha Len, Chamuk Khwai Cape and nearby islands like Koh Khot and Koh Sire. Here, you can see the Andaman on your left but as you climb higher up, the sea will shift to your right instead because at that part, you’ll be looking southeast towards Ao Nang and the mountains of Railay Beach. The smaller image, which was taken by a friendly hiker from a boulder a few metres away depicts the area where almost everybody who makes it to the top of Khao Ngon Nak would have a picture of themselves taken. Near the top left corner of the photo, you can see part of a rocky ledge where in the recent past daredevils would go and pose. Now the spot is declared off-limits for obvious safety reasons. 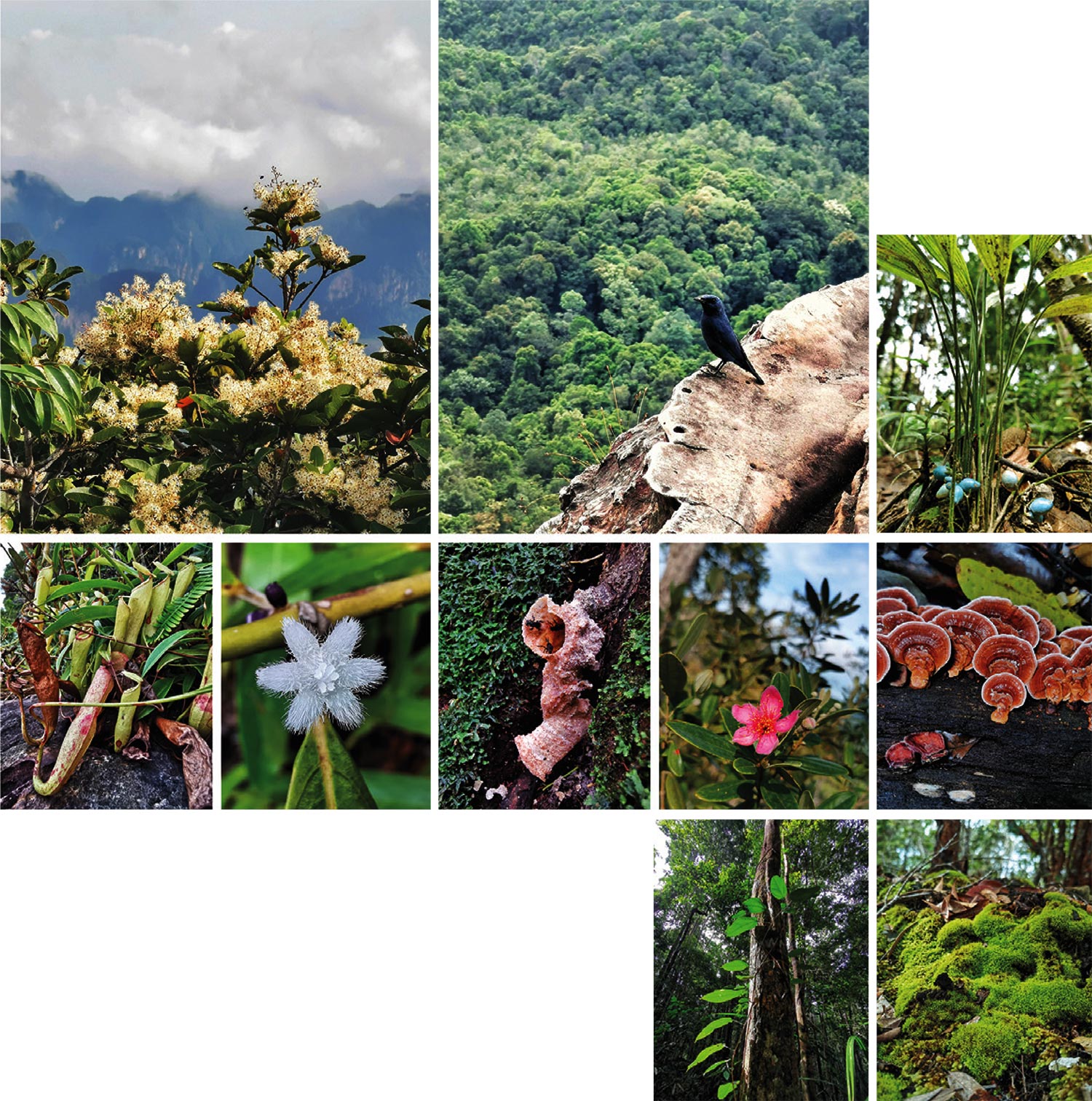 Biological diversity is not only crucial for an ecosystem to flourish but it also makes the hike up Khao Ngon Nak enjoyable. Along the trail, you’ll find lichens, fungi and numerous forms of plant life from ground-hugging mosses and carnivorous pitcher plants to climbers, epiphytes and towering emergents. During the hike, I also spotted a squirrel, a large gecko, and heard and saw countless insects and birds, one of which was on the edge of a rock next to me as if it was enjoying the bird’seye view of the forest below, just like I was doing. 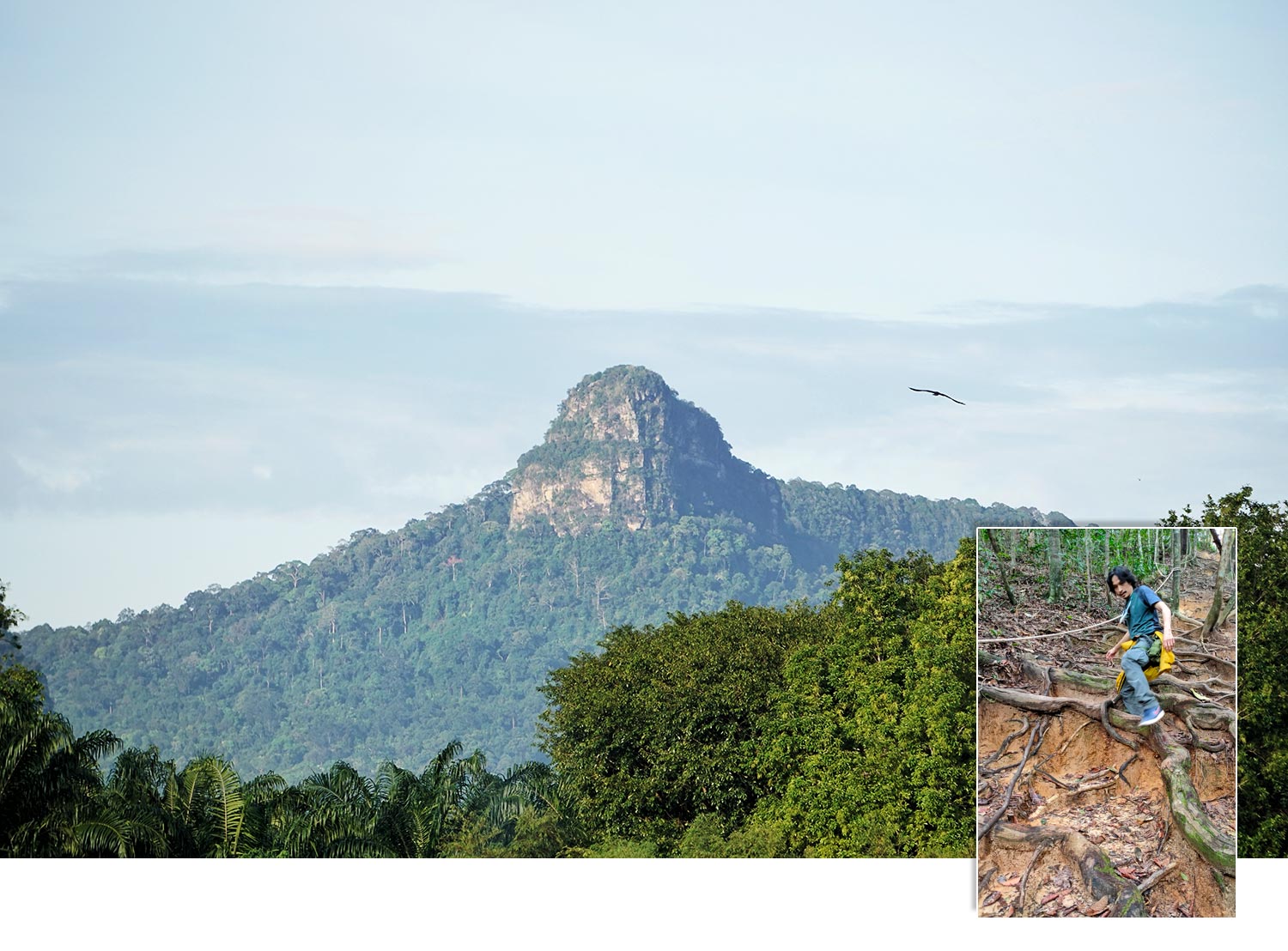 If you look at Khao Ngon Nak (Naga Crest) from Nong Thale lake, about 5km to the east, it is not difficult to understand why the mountain was so named. The trail to its rocky peak is on the west side, which is not as steep and thus hikeable.

Tambon Nong Thale (pronounced nong-tha-lay) in Krabi's Muang district boasts an impressive collection of works by Mother Nature. Each place is grand and stunning. Surprisingly, these places are not as well known as Thap Khaek Beach or Tha Len Bay, which are also located in Tambon Nong Thale.

Recently, I visited Banyan Tree Krabi, which is situated at the north end of Thap Khaek Beach and just a stone's throw to the access road to the trailhead up Khao Ngon Nak. The mountain is known in English as the Dragon Crest although the correct translation of the Thai name is Naga Crest.

Anyway, I have been to Krabi several times and had heard of Khao Ngon Nak for quite a while. However, I must admit that I thought it was just another lookout point but I was wrong all along. The moment I reached the peak and looked down at the land and the sea, I felt as if I was looking at the mythical world of the Nagas.

To reach the mountaintop, you need to trek up a 3.7km trail. There are some gnarly and steep sections but like beauty, the difficulty level is subjective. Some may complain that the hike may kill them while others might finish it in less than the average of two hours and say that it's a pleasant workout. However, one thing I think everybody agrees on is that the vista at the top is well worth the climb.

It would have been even better if the Khao Ngon Nak trail is open earlier in the morning, so visitors can hike to the top in time for the sunrise.

The next day, I left the hotel at 5.30am on a rented motorcycle to Nong Thale lake about 15km away. Again, I missed the sunrise but still had plenty of time to enjoy a surreal morning scene of the lake with karst formations in the backdrop from a kayak. Man, Mother Nature never disappoints me.

Not far from Nong Thale lake is another freshwater site called Klong Lut or Klong Nam Sai where kayaking is also possible. However, I had no time for that on this trip because I had to rush to Din Daeng Doi to enjoy another epic view that Tambon Nong Thale has to offer. Actually, like at the lake, the best time to visit this scenic lookout point perched on a small hill is in the morning between sunrise and 8.30am, which is when the Karst scenery is at its best thanks to the morning mist and fog. It was almost 9am when I got there but the view was still delightful.

Every time I look at the pictures I took at these places, it makes me want to return. Next time, I'll make sure I spare a morning for each of them and try to reach every site even earlier. 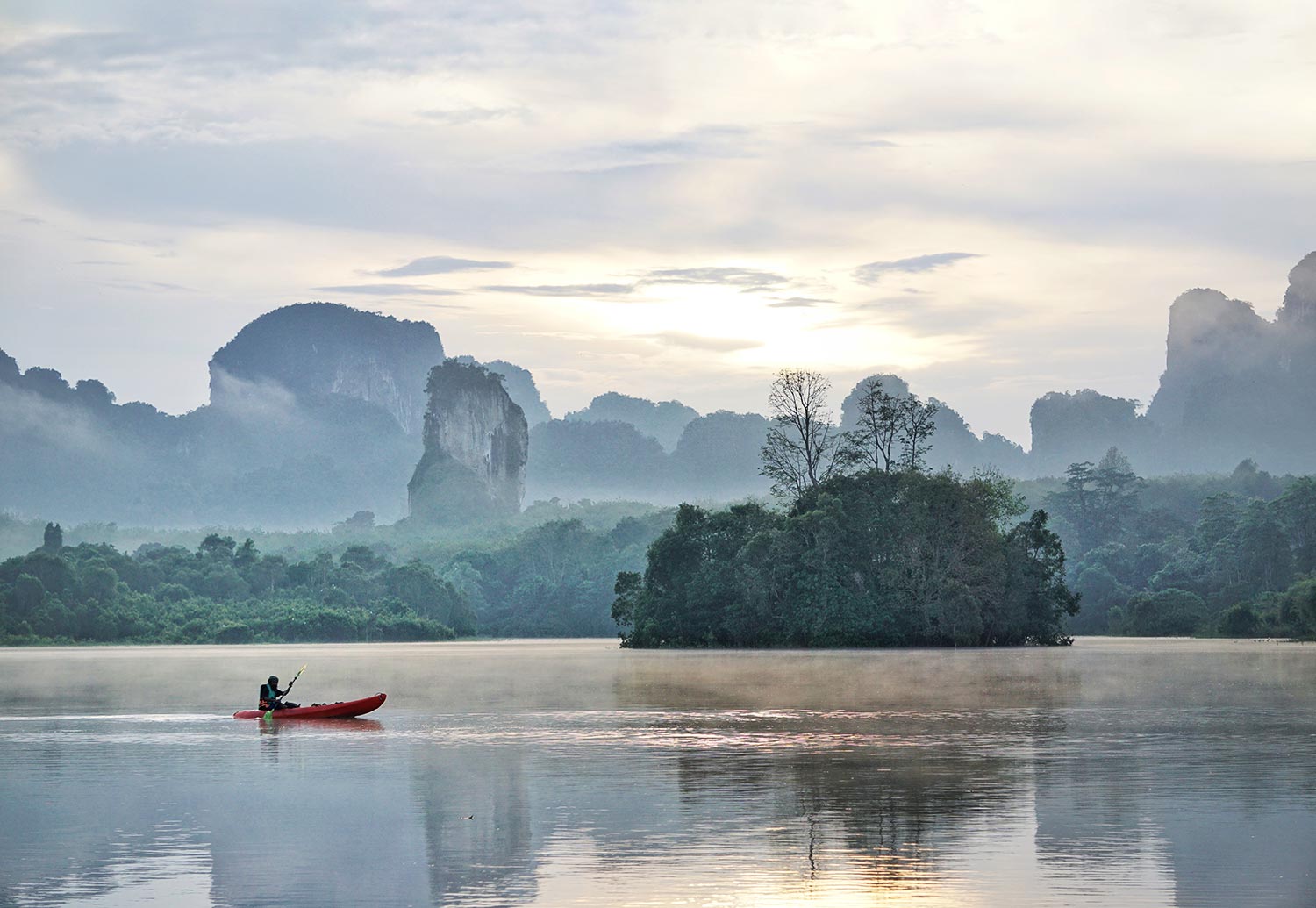 The lake at Nong Thale is not only one of Krabi’s largest bodies of freshwater but also one of the province’s most beautiful sites. Again, this photo cannot compare to the actual awesomeness of the place. Surrounded by the greenery of public land with limestone mountains in the background, the lake — located near the main road (4034) and communities — is a truly a hidden gem. Over the years, villagers, most of whom are Muslims, have teamed up to protect this natural haven as it also serves as their precious source of water, food and additional income from ecotourism. Rental kayaks and guided boat tour service are also available. If you wish to see the lake at its best, you need to wake up very early and get on the boat in time to catch the sunrise. 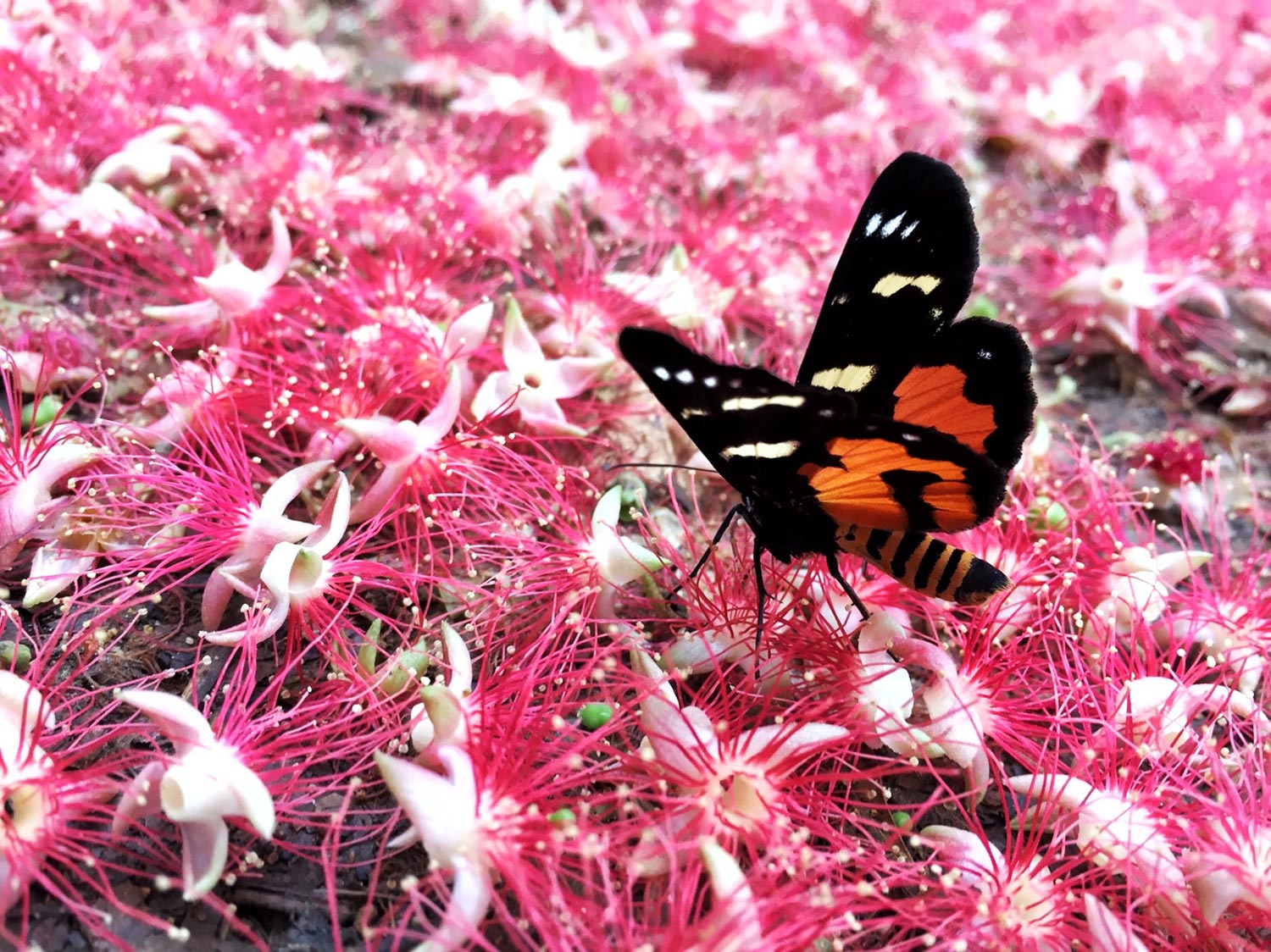 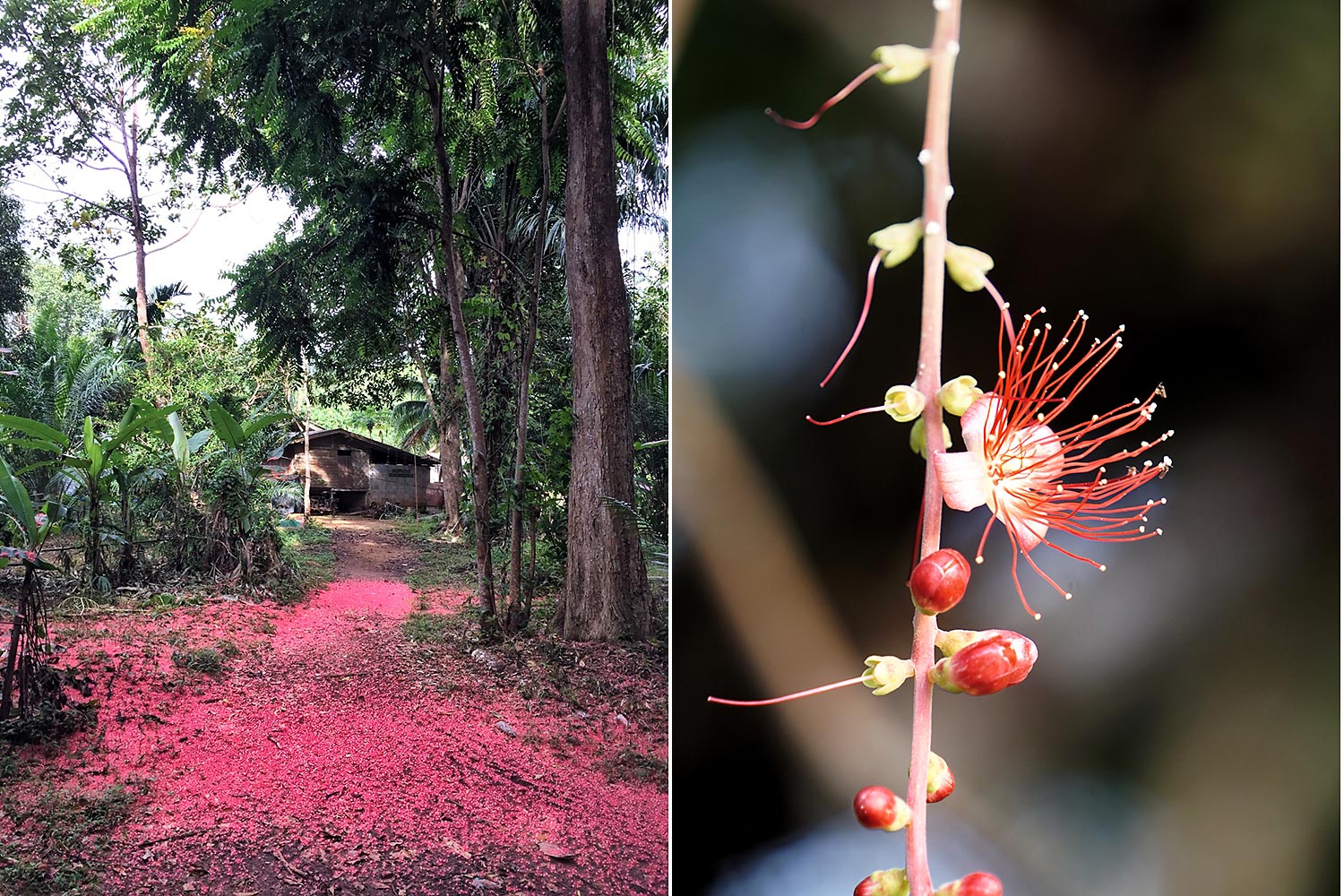 Nong Thale lake can be visited at any time of year but between May to June is when you will be able to see the mass blooming of chik flowers (Barringtonia acutangula or Indian oak). At many spots, the ground and the water surface are covered by red carpets of fallen chik flowers. However, you can still find the blossoms in the area even in December but only in a small amount. One of the pictures you see here was taken last Friday. (Photos: Kiertisak Sookkay) 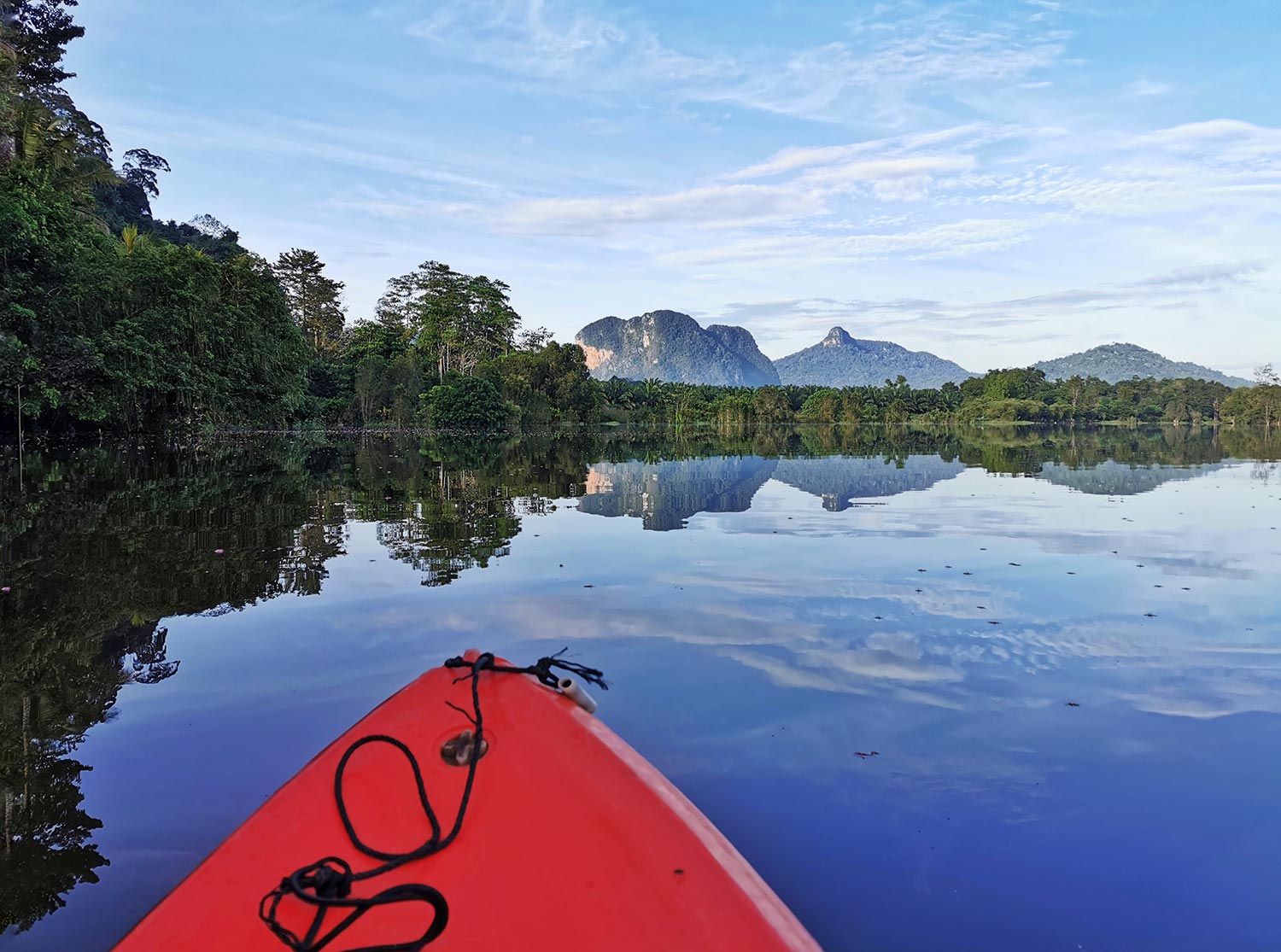 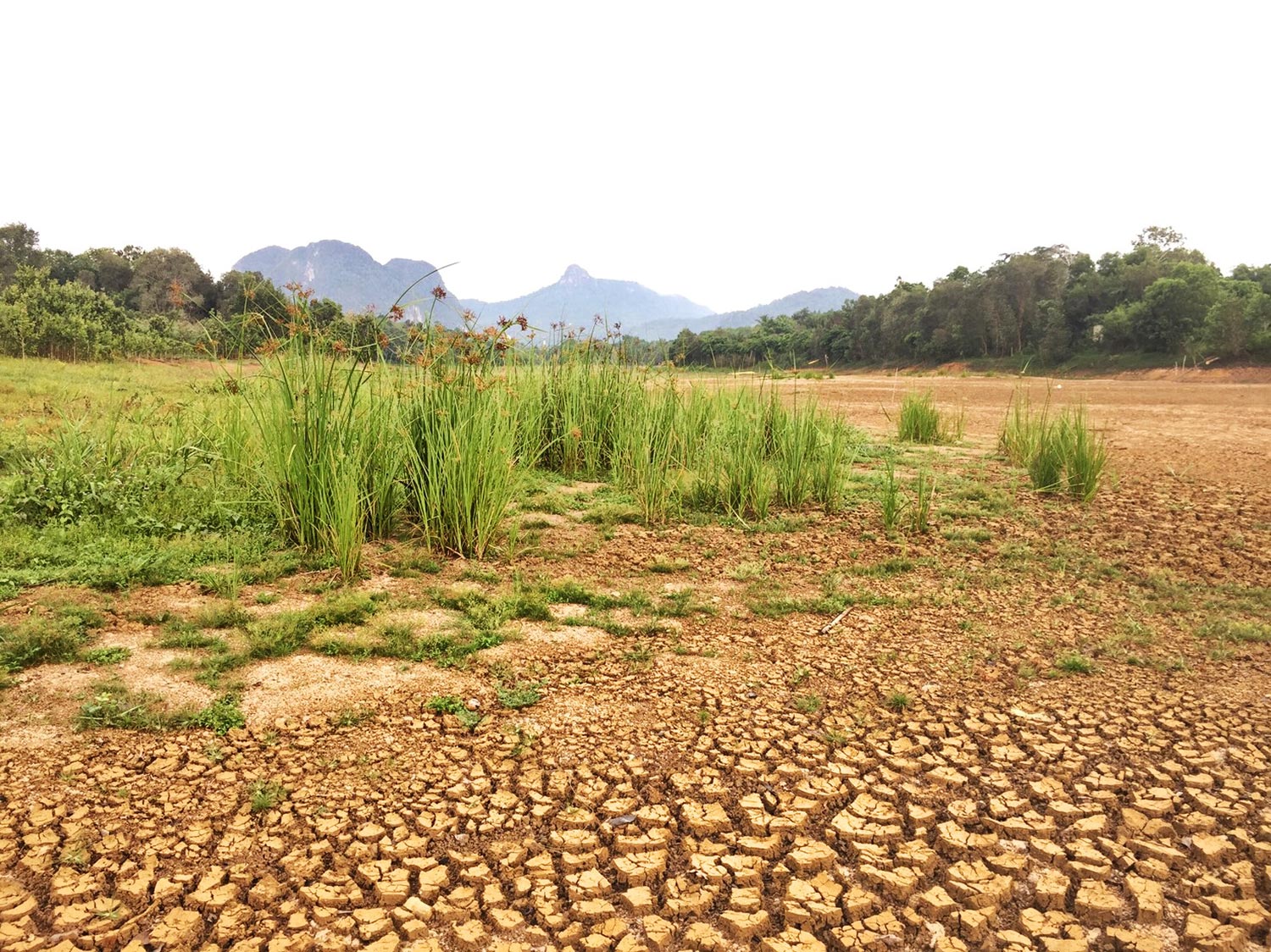 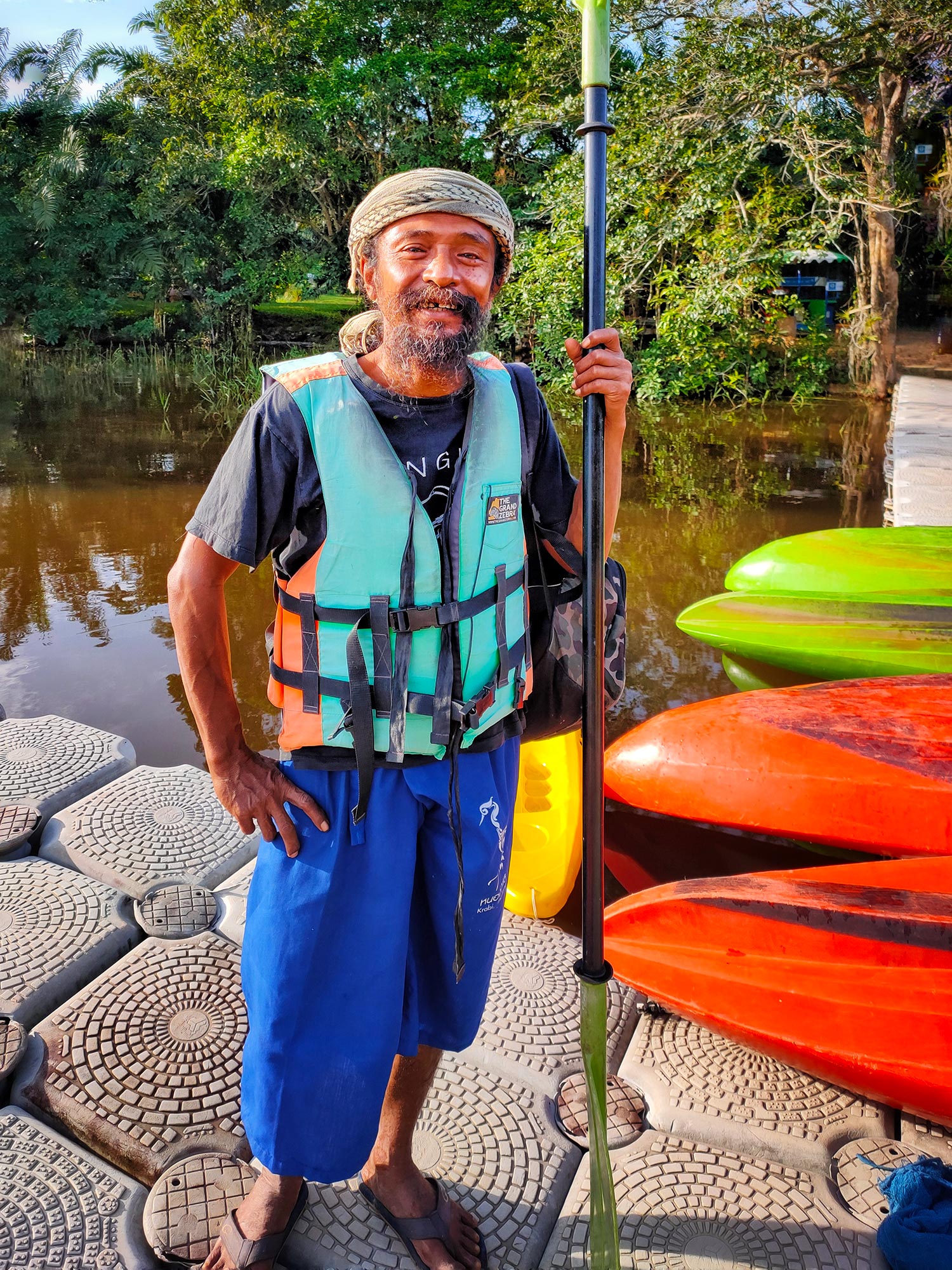 The beauty of Nong Thale is not something to be taken for granted. The locals have been working hard to preserve it and protect it from encroachment and over- exploitation. In April last year, the water in the lake dried up because too much water was pumped out for tap water production. In response, the villagers joined forces and struck a deal with the local public waterworks agency to ensure that such an issue will not rise again. Seen in the picture is local leader Kiertisak Sookkay or Bang Zaeid, who acts as head of conservation of Nongthalay Community Ecotourism group. 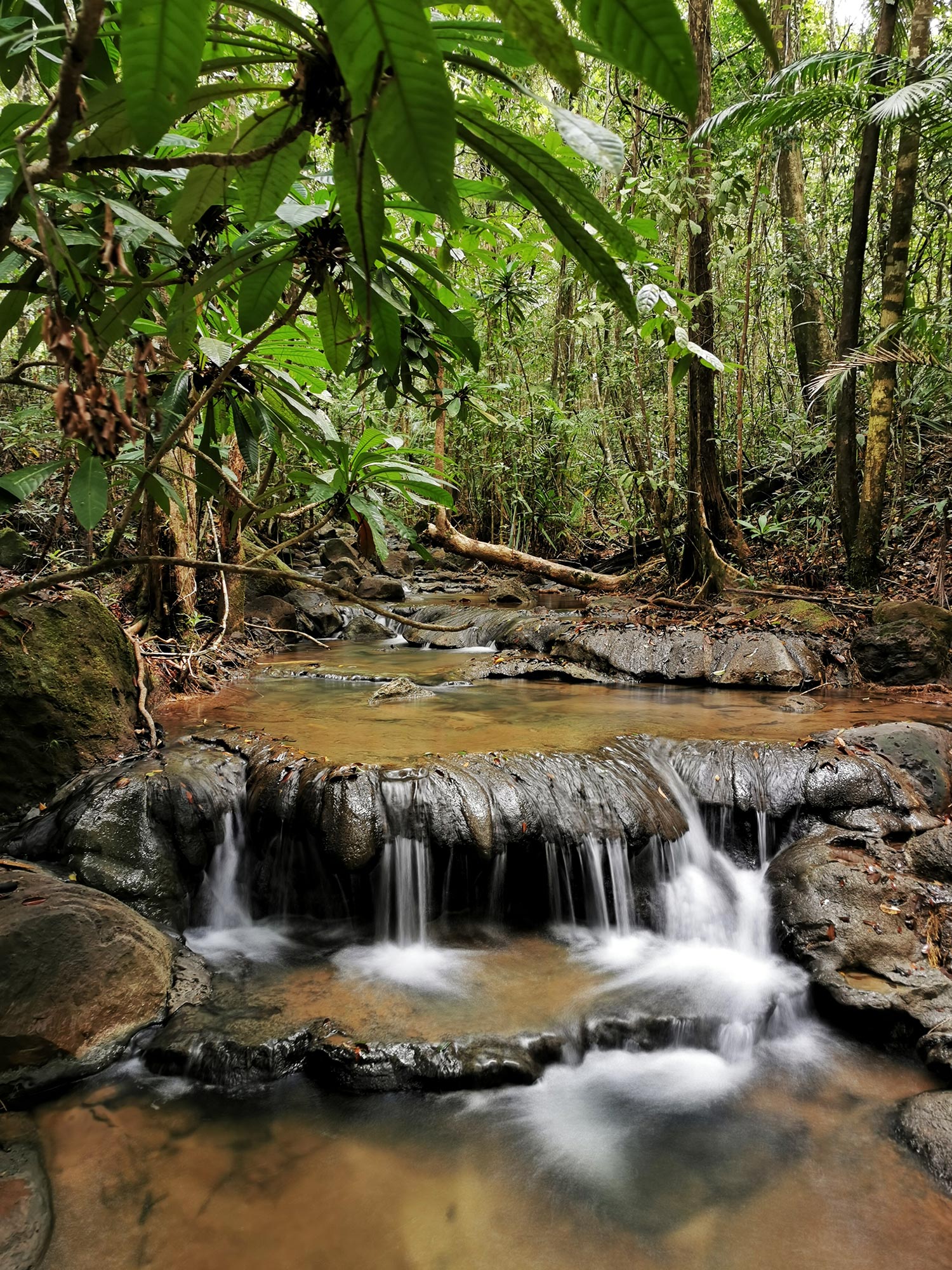 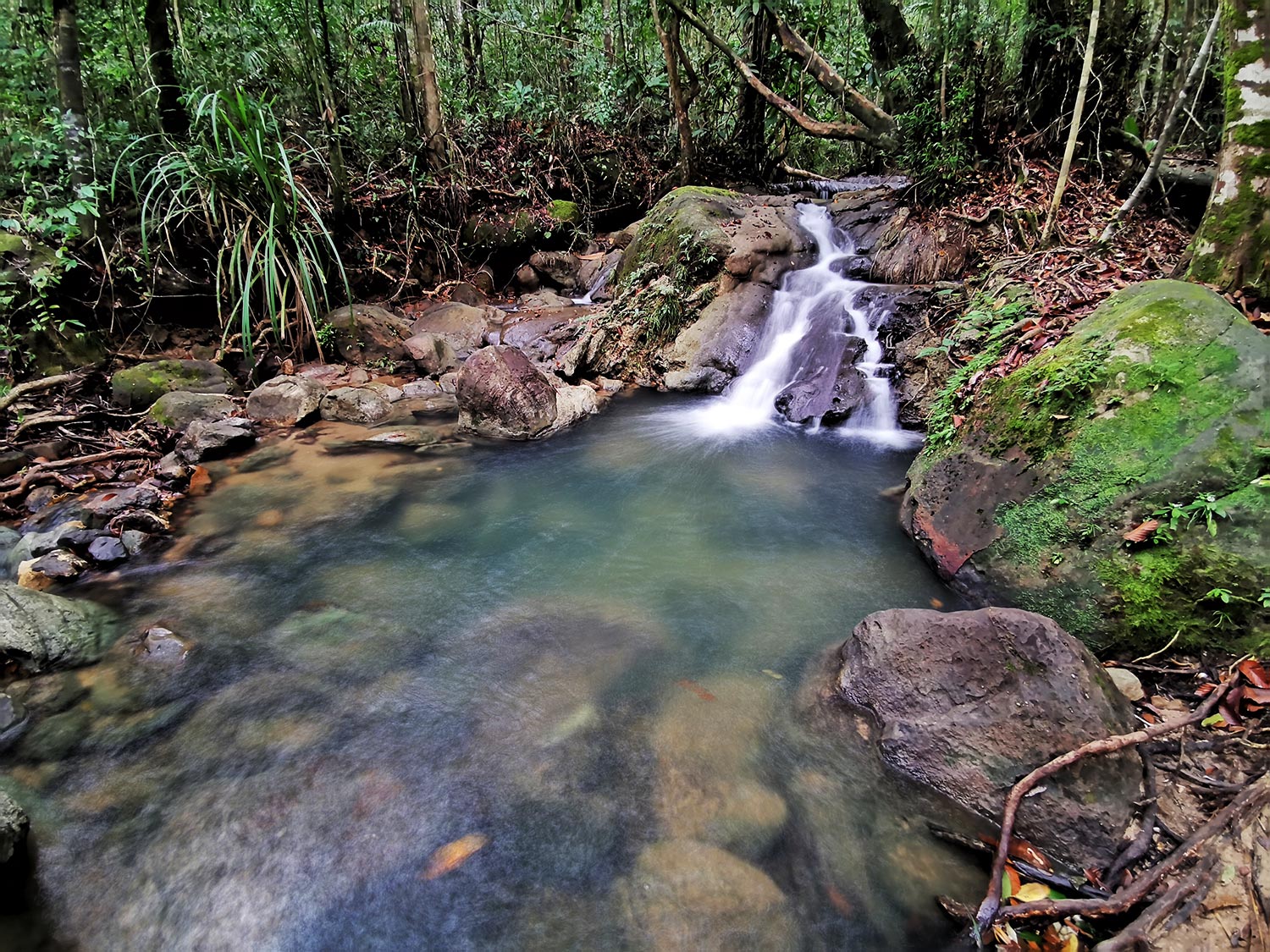 At the foot of Khao Ngon Nak, right next to the trailhead, is a brook with small waterfalls and pools where hikers can refresh themselves after climbing down from the mountain.

Thanks to well-preserved karst formations both on and offshore, Tambon Nong Thale is blessed with many amazing sites besides Khao Ngon Nak and Nong Thale lake. Well-known among the locals is Din Daeng Doi, a place where one can enjoy a mesmerising sunrise over limestone hills shrouded in the morning mist. Like from the top of the nearby Khao Ngon Nak, the sweeping vista here extends all the way to the sea, making the place a decent alternative for those who do not wish to hike up the mountain. Another group of karst formations is located in the sea. Known as Pa Koh (forest of islands), it is made up of Koh Hong, Koh Pak Ka, Koh Kaya and several other islands and islets. Pa Koh can be seen from the trail up Khao Ngon Nak and more comfortably on Thap Khaek Beach which is a romantic place to watch the sunset. 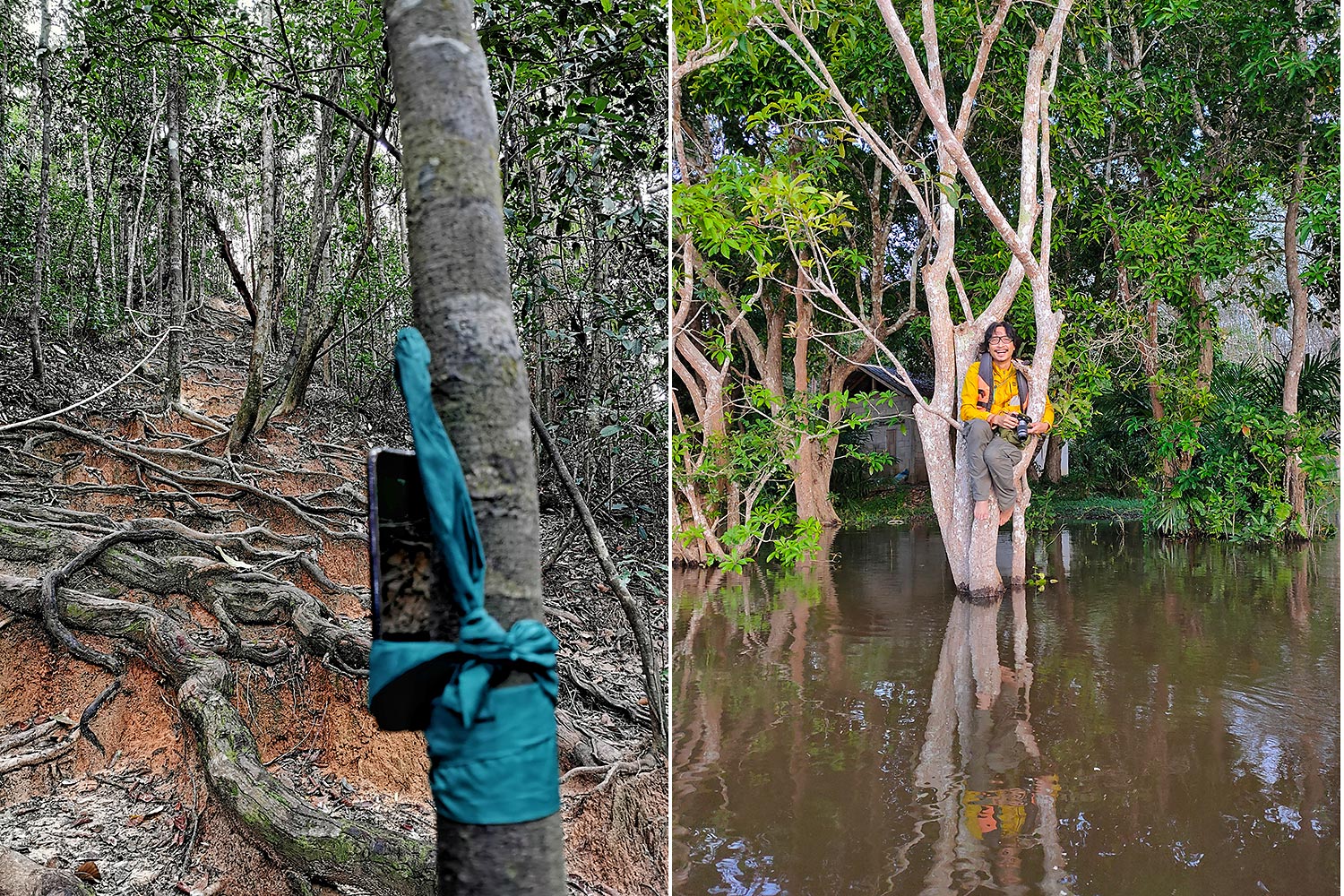 The photo of Nong Thale lake is my most memorable from the trip, not because I think it looks nice but rather because of how I took it. I wanted to have a boat in the scene but the only one in the entire lake was the kayak Bang Zaeid and I were on. Therefore, I had to get off the vessel so the local guide could paddle to where I wanted him to be. However, there was no solid ground for me to stand, so while looking around, I found a partly submerged tree that could offer me a dry perch. After making sure there was no snake or wasp nest on the branches, I hauled myself up the tree and took the picture. I still remember laughing at myself while pressing the shutter release button. As a travel photojournalist, a common issue for me when travelling alone is when I need somebody in the photo but there is nobody around. With the camera’s self-timer function (in this case, the camera was a smartphone), a tree instead of a tripod and myself as the model, the problem was solved. Can you guess this was how I took which photo in this article? 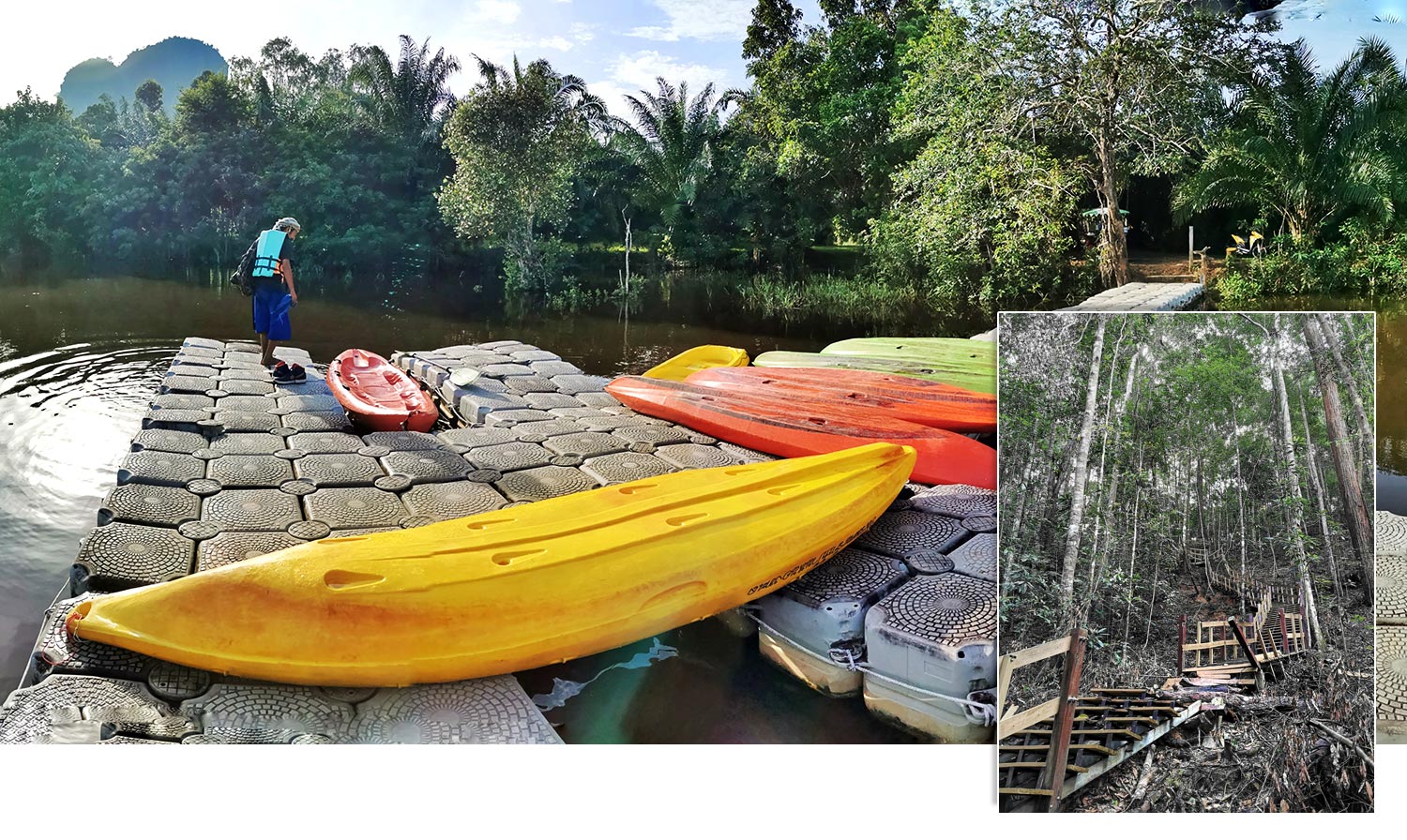 The pier at Nong Thale lake allows for safe embarking and disembarking. According to the villagers, it was made from a redesigned used floating jetty. I was told the jetty was donated by Centara Grand Beach Resort in Ao Nang. Such a contribution means a lot to local tourism. While trekking up Khao Ngon Nak, I also noticed that part of a wooden staircase was crumbling and it would be great if any company looking for a CSR idea steps in to help. 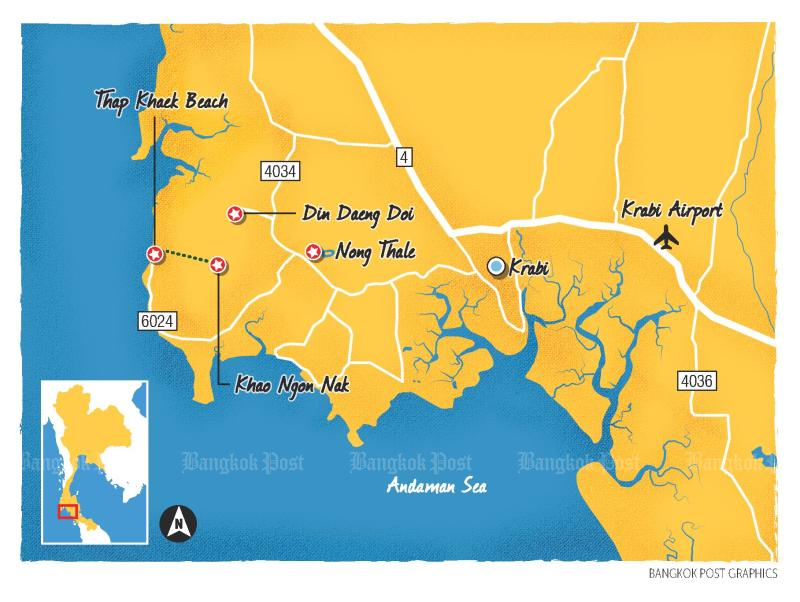