While there are many landmarks to see in this northern province across from Laos, perhaps the best activity is to sit along the mighty Mekong and enjoy the view

published : 7 Jan 2021 at 04:00
newspaper section: Life
writer: Karnjana Karnjanatawe
A dinner cruise along the Mekong is available every evening. The port is located not far from the Indochina market in the city of Nakhon Phanom.

The public space along the Mekong in the town of Nakhon Phanom was quite bright. It was illuminated by the yellow light of street lamps and colourful decorative lights to celebrate Christmas and the New Year. The ambience highly contrasted with the other side of the river, a quiet scene of the reserved forest of the Phou Hin Poun National Protected Area in Khammouane Province in Laos.

Thanks to the natural beauty of the limestone mountains in the neighbouring country, the view was one of the reasons that drew me back to the northeastern province during the cold season.

"I wish I had a home along the river so that I can see the scenic landscape every day," I told my barista while waiting for my espresso in her coffee shop located on the river bank. She smiled proudly.

The beauty of nature was shining especially when the sky turned orange and the yellow hue brushed the green limestone mountains during twilight. The cold breeze touched my cheeks. I saw a group of tourists about to board a double-deck boat. They wore life jackets on top of their sweaters. They would have dinner while the boat cruised the Mekong River.

"We call it a romantic dinner," said a staff member of Mekong Paradise Cruise, which operates the boat. She recommended me to book the service because of the limited number of guests during the Covid-19 pandemic. Wat Phra Phutthabat Wen Pla is about a 30-minute drive from downtown. The temple has a rare sacred site found on a rock in the Mekong River. Locals believe it is imprinted with two footprints of Buddha, known as Phra Phutthabat. During the dry season, starting from December to early May, you may visit the site by foot because the temple has built a wooden walkway for worshippers. (You can also see the third Thai-Lao Friendship Bridge in the background). The temple organises a celebration of Phra Phutthabat yearly from April 13-15. 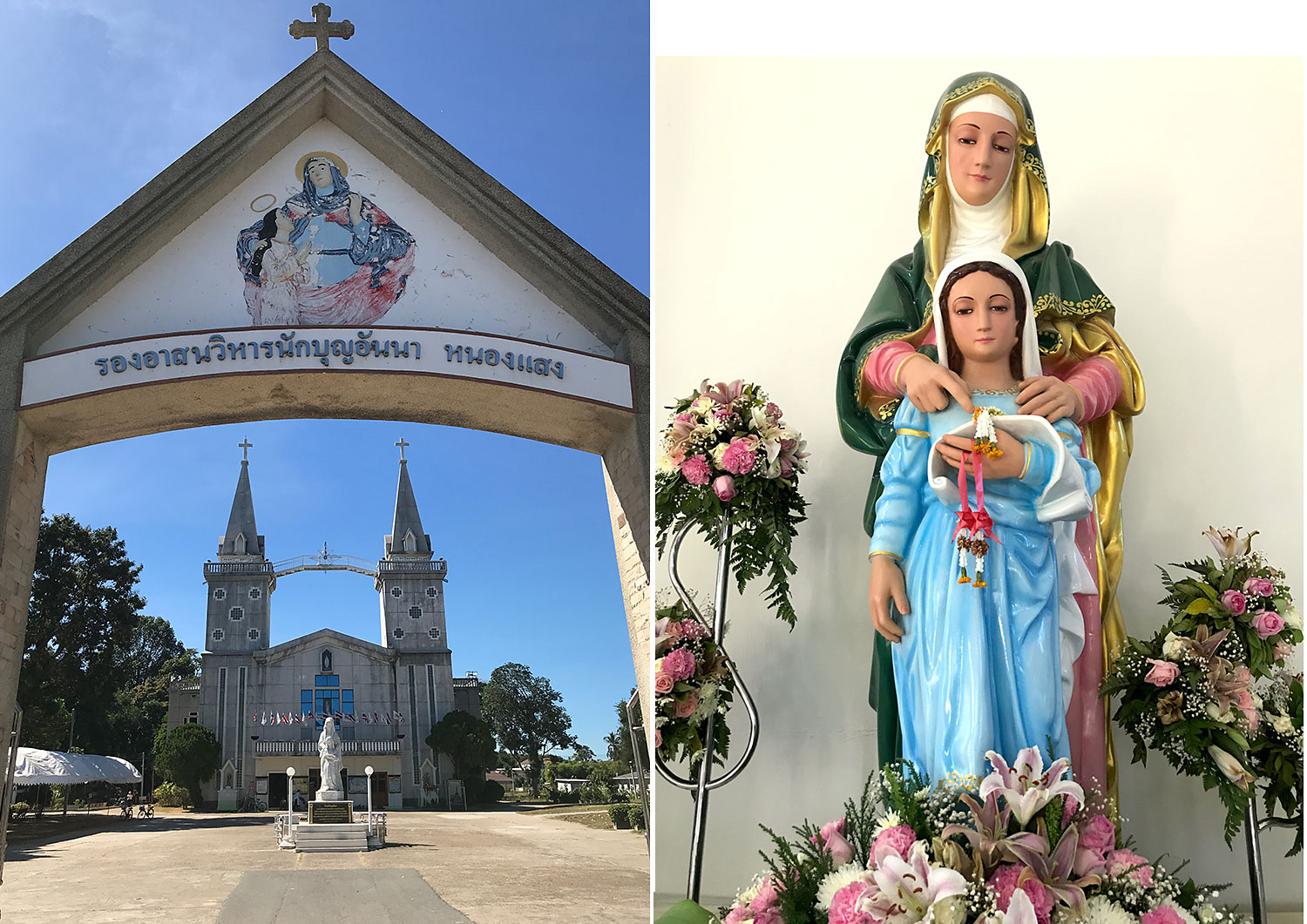 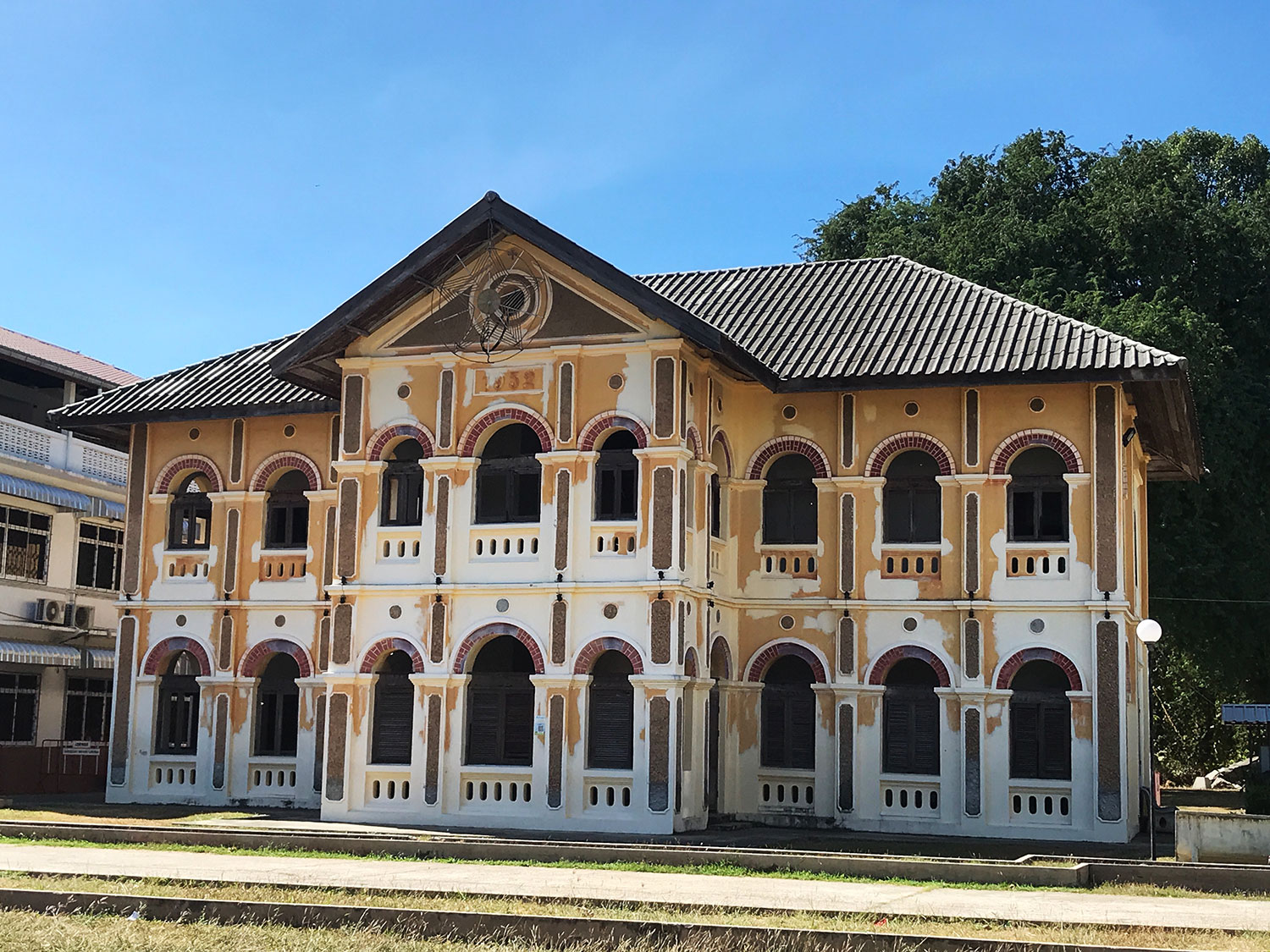 Located on the bank of the Mekong, St Anna Nong Saeng Catholic Church was built in 1926. The church has a large space at the front while the main structure is flanked by two towers, which are linked by a bridge. Inside the church, the interior is quite simple. The large wall behind an altar is decorated with stained-glass displaying Jesus on the cross and other biblical scenes. Next to the entrance of the hall, there is a spiral stair leading to the roof but the access is closed for safety. Nearby the church is an old colonial-style building built in 1952 but is closed for public visit.

I did not take the cruise this time. I would like to keep it for my next return. For this visit, I explored attractions along the river. My first stop was Lan Phanom Naga, the spot where the seven-headed naga sculpture known as Phaya Sri Sattanakaraj was built overlooking the Mekong.

The statue is made of 9 tonnes of bronze and reaches a height of 16.2m. I joined locals to pay respect to the mythical serpent, which looked elegant in gold colour. Under the statue is an exhibition room showing records when the statue was created in 2016.

There are many choices of coffee shop located on the other side of the road opposite the Phaya Sri Sattanakaraj statue. Some of them are on the second floor of shophouses that would be a good spot for seeing the view of the river.

A short walk from the naga statue, I reached Wat Okat, an old temple. It houses one of the most revered Buddha images of the province. I went directly to its prayer hall to pay respect to the twin-seated Buddha images called Phra Tiu and Phra Thiam. Locals believe that Phra Tiu was built by the ruler of Sri Kottabun Kingdom in 695AD to bless the kingdom.

The duplicated version was sculptured after a big incident that burnt down the temple. But Phra Tiu survived the fire and the image was later found floating in the Mekong River. The ruler donated 30 baht of gold to coat the Buddha image and also placed the identical sculpture nearby. Every year on the Full Moon day of the sixth lunar month, the temple hosts a bathing ceremony for the two images. But the temple does not use the two ancient sculptures. The duplicated versions of Phra Tiu and Phra Thiam were crafted to be used for the ceremony. For this year, the ceremony will be organised on April 26.

Another stop along the Mekong River that is worth a visit is the old Governor's Residence, which was renovated into a museum in 2006. The building was built in a colonial style and survived aerial bombing during the Indochina War.

Last but not least, I made a stop at St Anna Nong Saeng Catholic Church or St Anna Church for short. The church is quite peaceful and welcomes anyone to see its grand structure.

Before leaving the province, I visited Phra That Phanom, the old and handsome stupa in That Phanom district, about a one-hour drive from the city. People say you can't get to the province without a visit to the temple to worship the Buddha relics. And if you make an effort to visit the temple seven times, you will become luk phrathat, meaning you will be blessed.

Although I liked all places that I visited, the place I liked the most was a long walkway along the bank of the Mekong River. In fact, when you are in the town, the best thing to do is to spend your time sitting next to the bank of the river, doing nothing but enjoying the scenery of the limestone mountains. 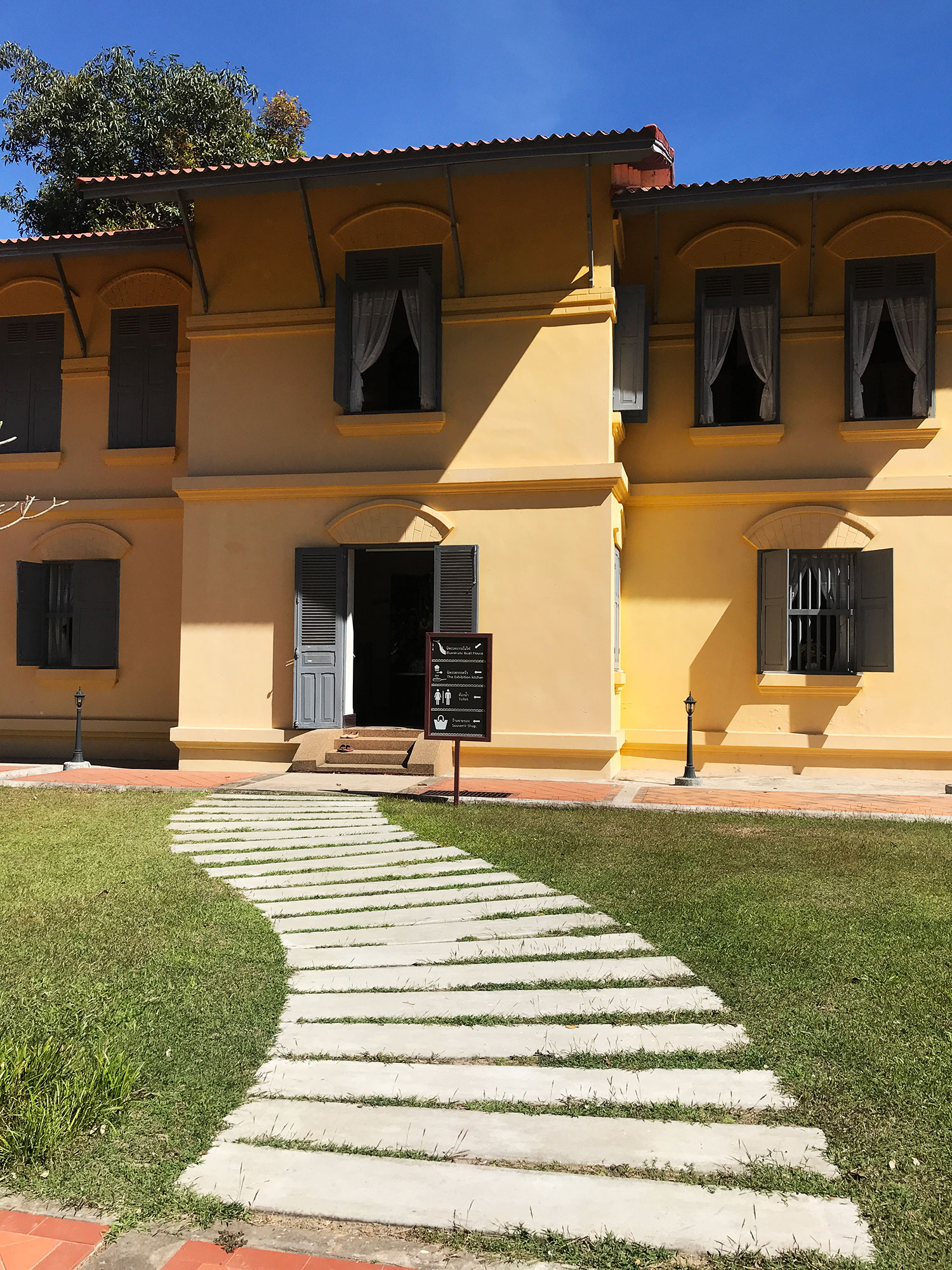 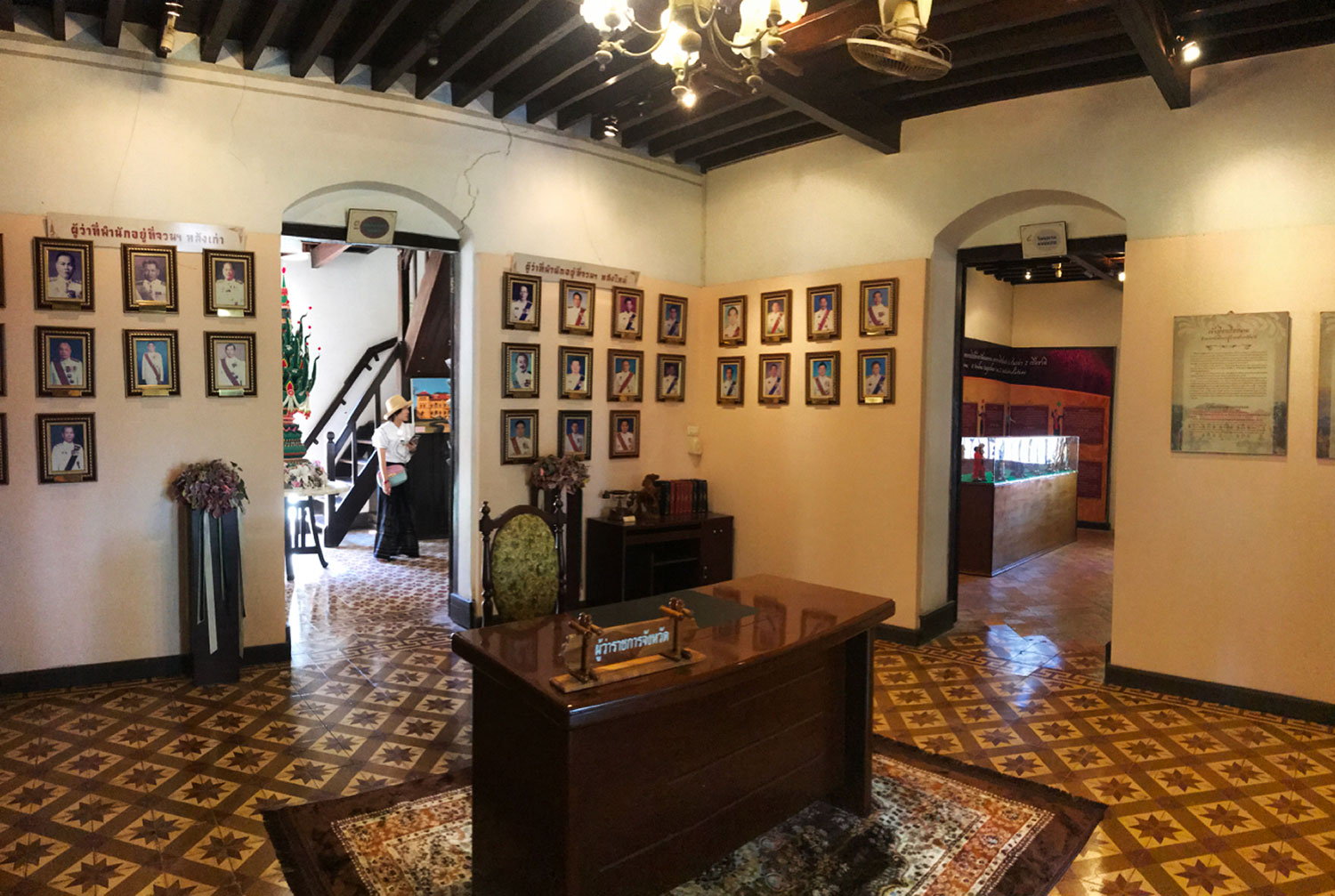 Standing elegantly on the banks of the Mekong is the Museum of the Nakhon Phanom Provincial Governor’s Residence. It was built from 1912-1914 by Phra Phanom Nakananurak, the first governor, on a 4 rai plot of land not far from St Anna Church. The residence consists of three buildings, the two-storey main structure built in a colonial style and two single-storey buildings. One was a staff house while the other was a kitchen. The mansion underwent some restorations including a major one in 1995 to welcome Their Majesties King Bhumibol Adulyadej and Queen Sirikit. The residence was shut down after a new residence was built in 1980. In 2006, the Fine Arts Department renovated the building and turned it into a museum. It comprises 10 exhibitions, including a working desk of governors and pictures of former governors on the wall, historical records as well as a bedroom with old decorations like the period when Their Majesties stayed a night during the royal visit. 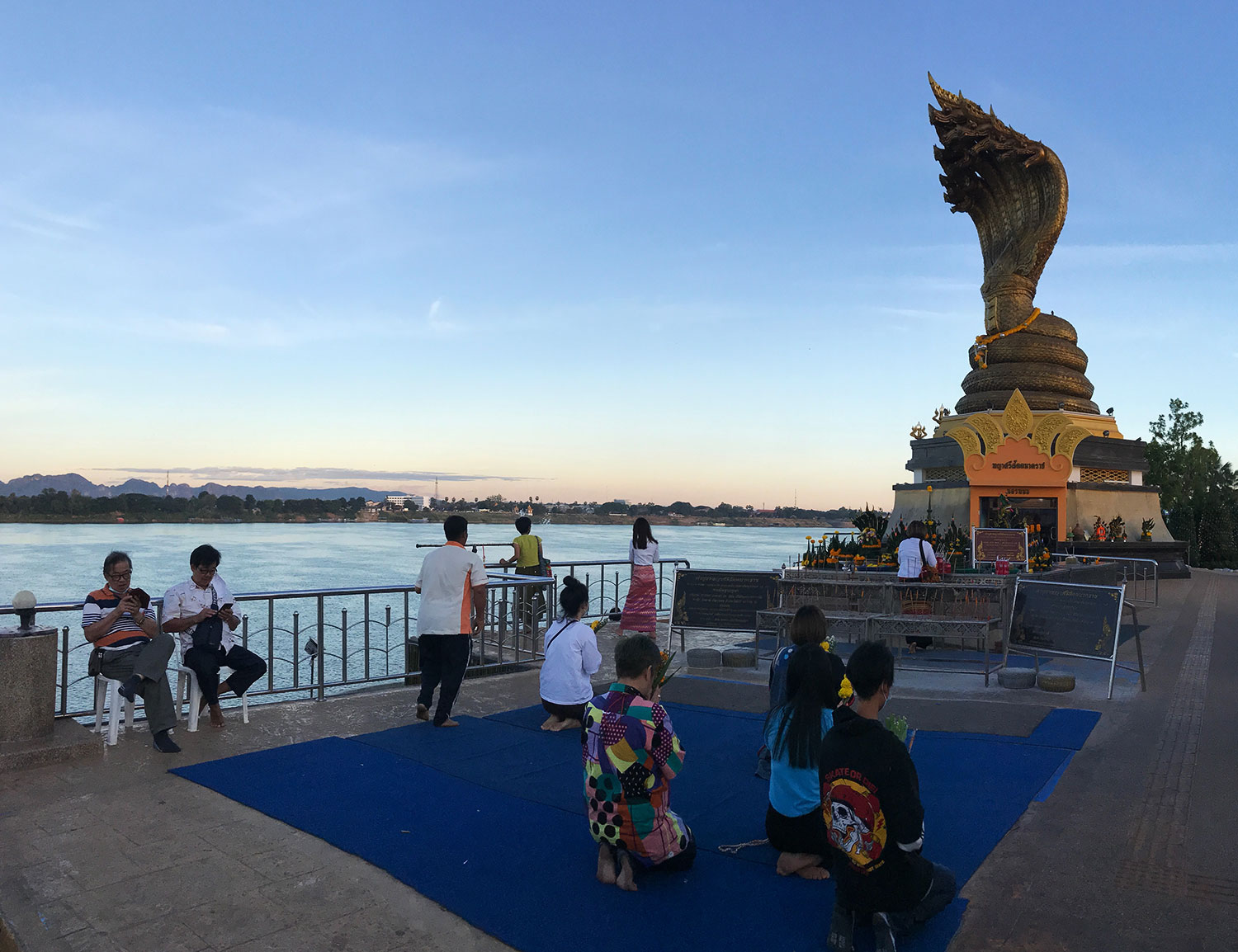 Phaya Sri Sattanakaraj is a seven-headed naga, the mystical serpent-like creature believed to reside in the Mekong River. It was built on the bank of the river in 2016 as a landmark of the province. The height of the coiled naga sculpture is 10.9m excluding its 5.3m base. Locals believe that the naga helps protect their city. 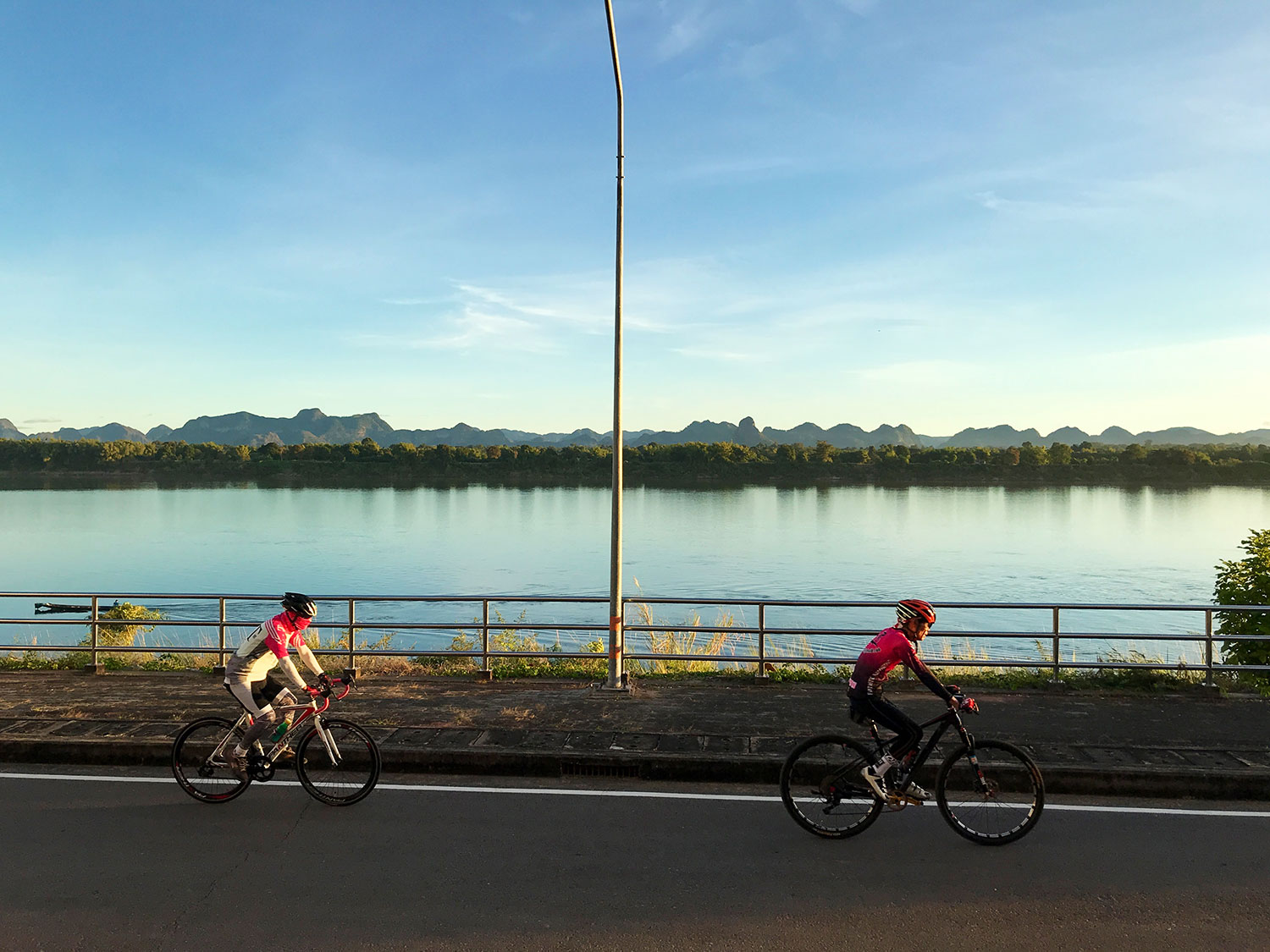 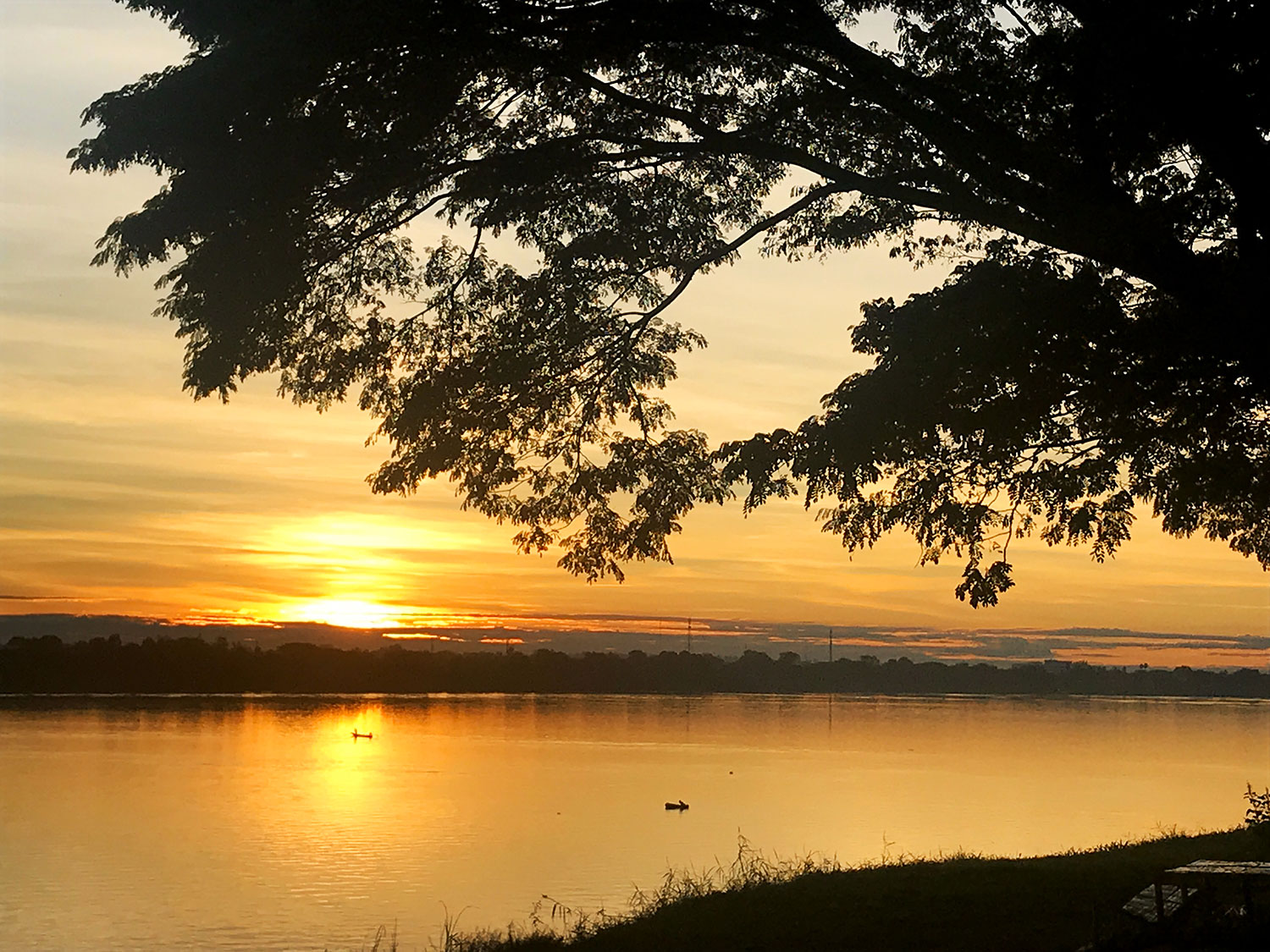 A long public space along the Mekong is a pleasant place to view the sunrise over the river. To promote good health among residents, the province built a 70km bike lane running in parallel with the river, starting from the third Thai-Lao Friendship Bridge to Phra That Phanom temple. 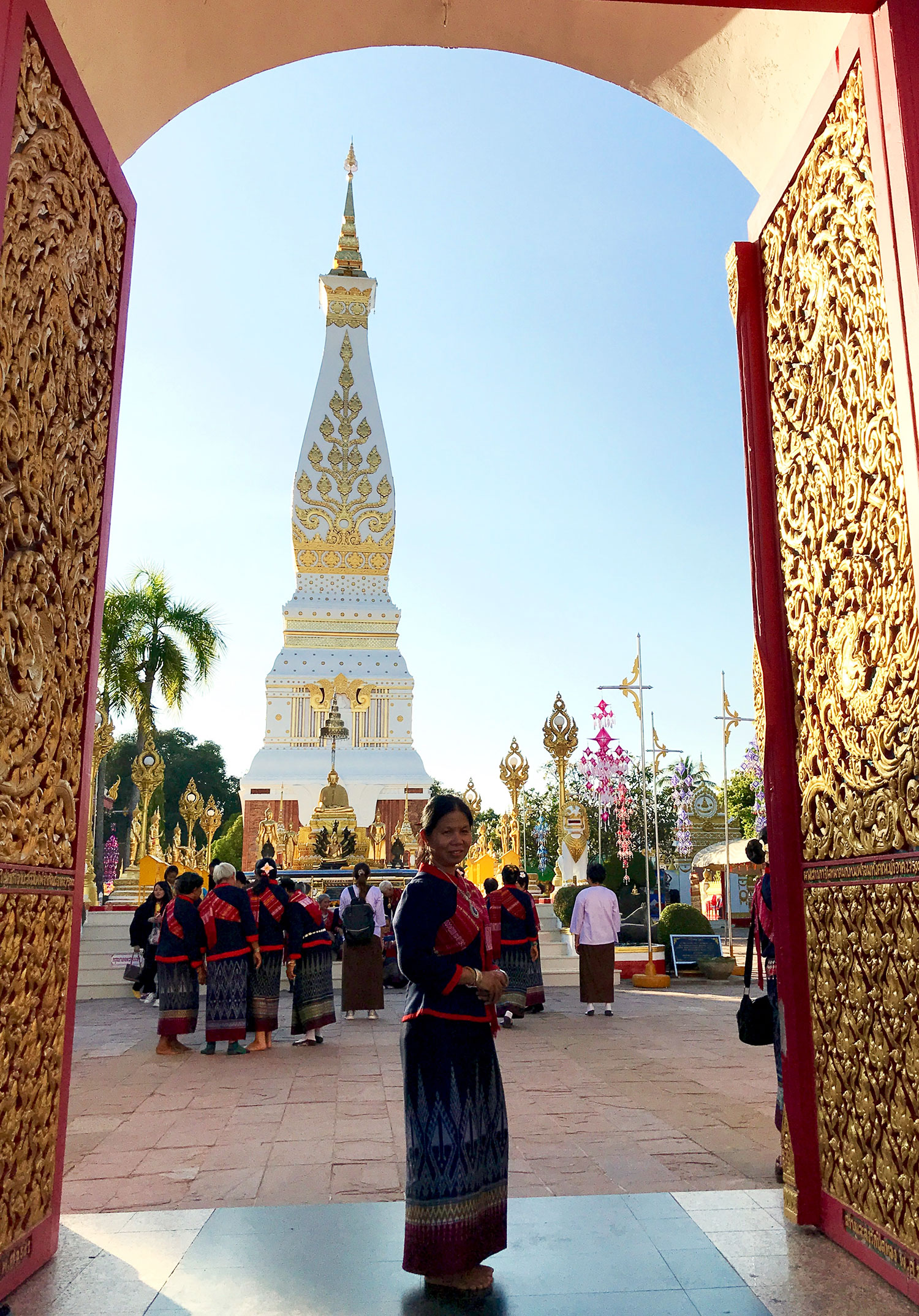 Located on the Mekong River, Phra That Phanom is one of the most highly revered Buddhist monuments in the Northeast. The stupa was built in 500BC to house Buddha’s relics. The grand stupa was renovated several times including the major one in 1690-1692 by Phra Khru Luang Phonsamek, a monk from Vientiane, who made the square lotus shape in the style of Laos’ Lan Xang art, which is seen today. The stupa stood tall for centuries before it collapsed in August 1975 because of a heavy downpour that continued for several days. The structure was rebuilt by the Fine Arts Department in 1976-79. Today the stupa is 53.6m high and topped with 16kg of real gold. On the eighth day of the waxing Moon of the third lunar month, the temple organises an annual merit-making festival in which people can join a parade and food fair. This year the event is postponed from Jan 21-29 to Feb 19-27 due to the pandemic. The event may be cancelled if the second outbreak is still ongoing. 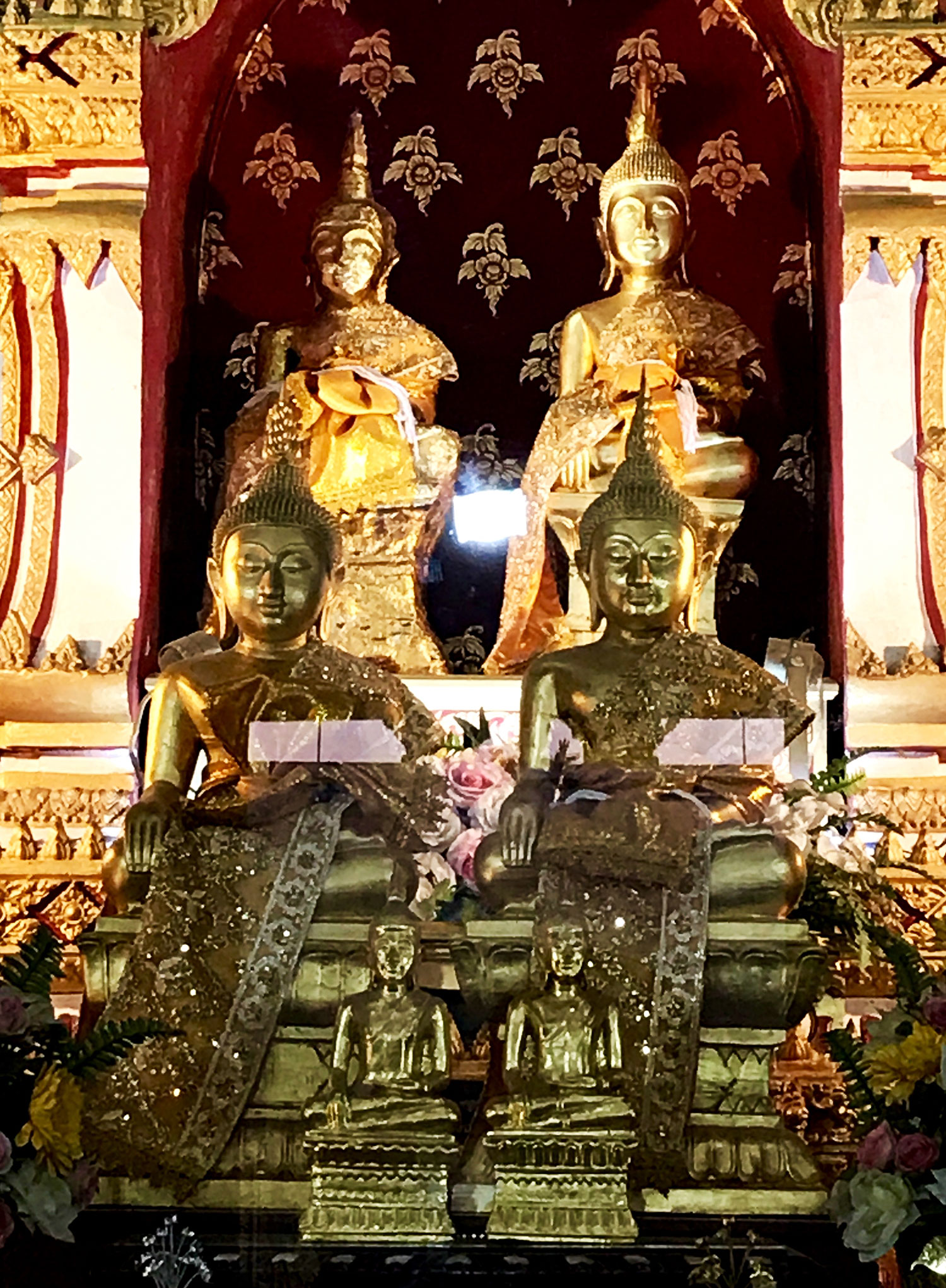 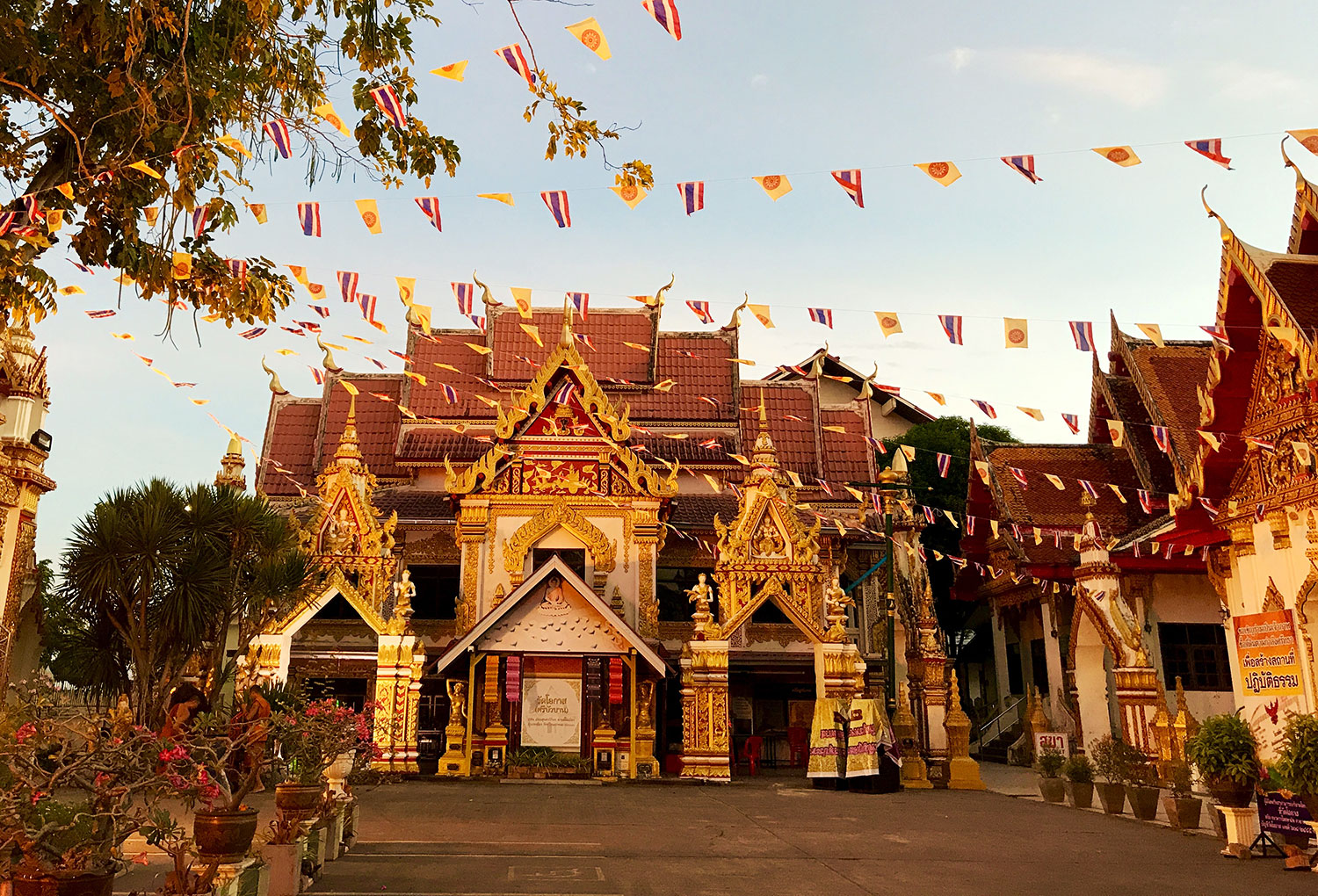 A short walk from the Indochina Market is Wat Okat. Located on a 3.5 rai plot of land facing the Mekong, the temple houses Phra Tiu and Phra Thiam, the two sacred Buddha images in its prayer hall. Locals believe that the wooden images were crafted in the 7th century and were about 60cm tall. Legend has it that Phra Tiu was lost during a big fire that burnt down the temple. Worshippers created another Buddha image to have an appearance like the seated Phra Tiu. They called the image Phra Thiam (the imitated one). They later found the original Phra Tiu so they worship both images. It is said that Phra Tiu is on the right-hand of Phra Thiam and Phra Thiam is the sculpture coated by gold leaf. 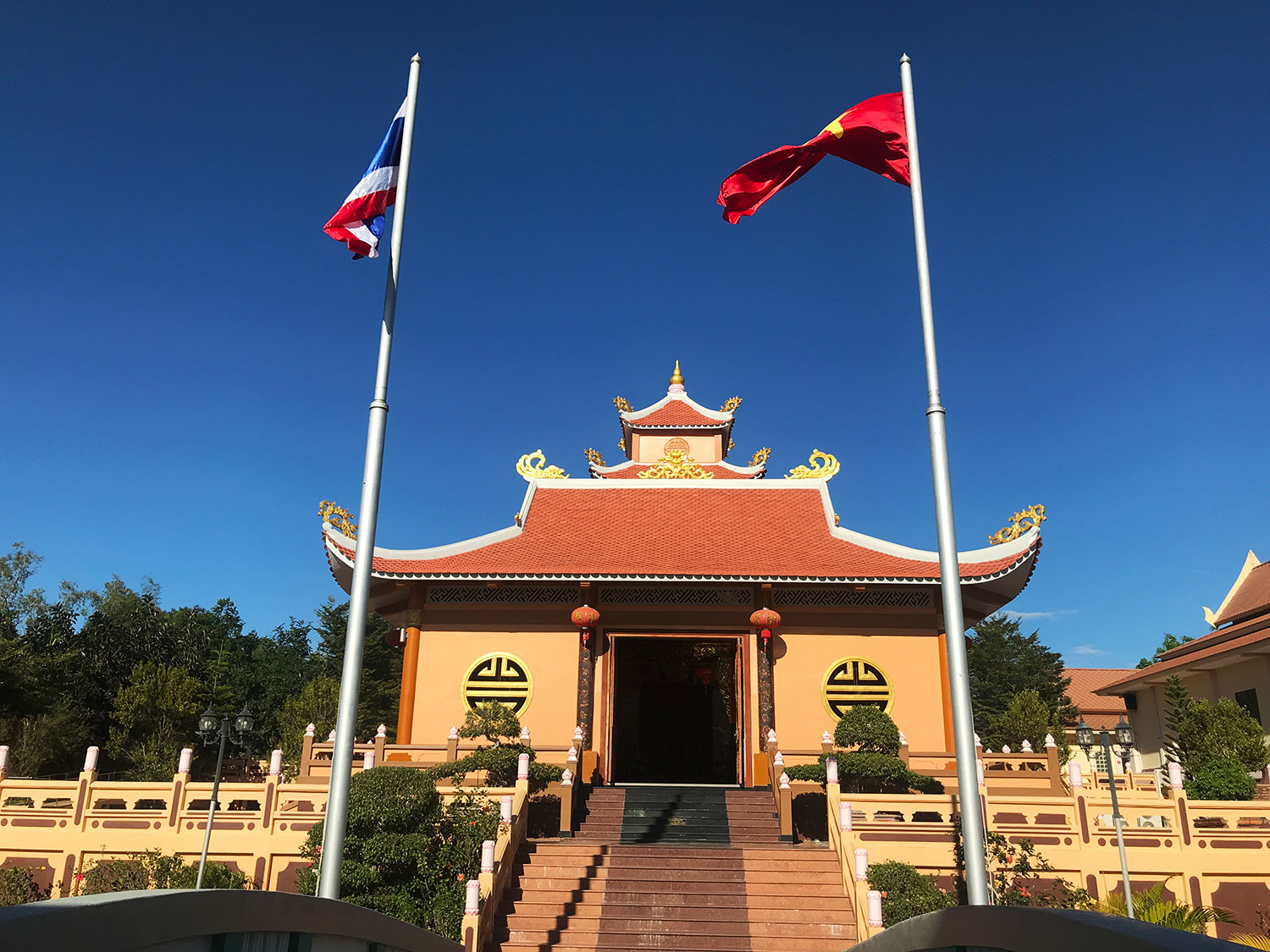 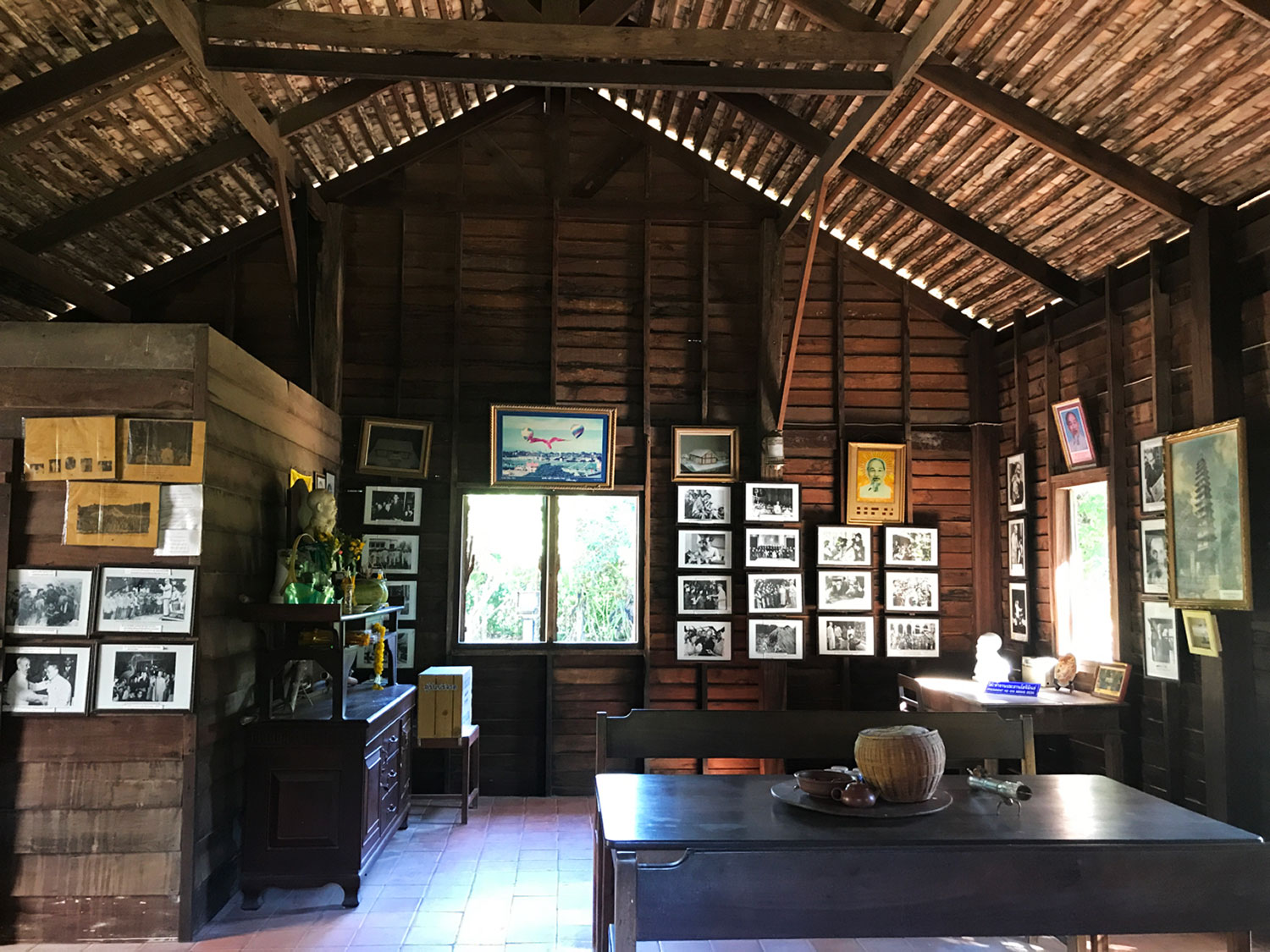 In the quiet Ban Na Chok village in Muang district, a humble wooden house was once used as the residence of Ho Chi Minh, the leader of the Vietnamese nationalist movement and the president of the Democratic Republic of Vietnam (North Vietnam). He lived in the community as a farmer during 1928-1929. At that time, locals who were Vietnamese descendants called him “thao Chin” (meaning an old Chin). He lived in a one-storey wooden house in the 2.5 rai plot of land of Nguyen Van Tao, the son of a close soldier of the leader. In 2001, the house was renovated to be a tourist attraction. It has two bedrooms, a living room, which is also used as a common area, and a dining area. The kitchen is located separately at the back of the house. To further promote the friendship between Thailand and Vietnam, Ban Na Chok has been named the Thai-Vietnamese Friendship Village. The Ho Chi Minh Memorial was built on a 7 rai plot of land not far from his residence. The project received a 45 million baht fund 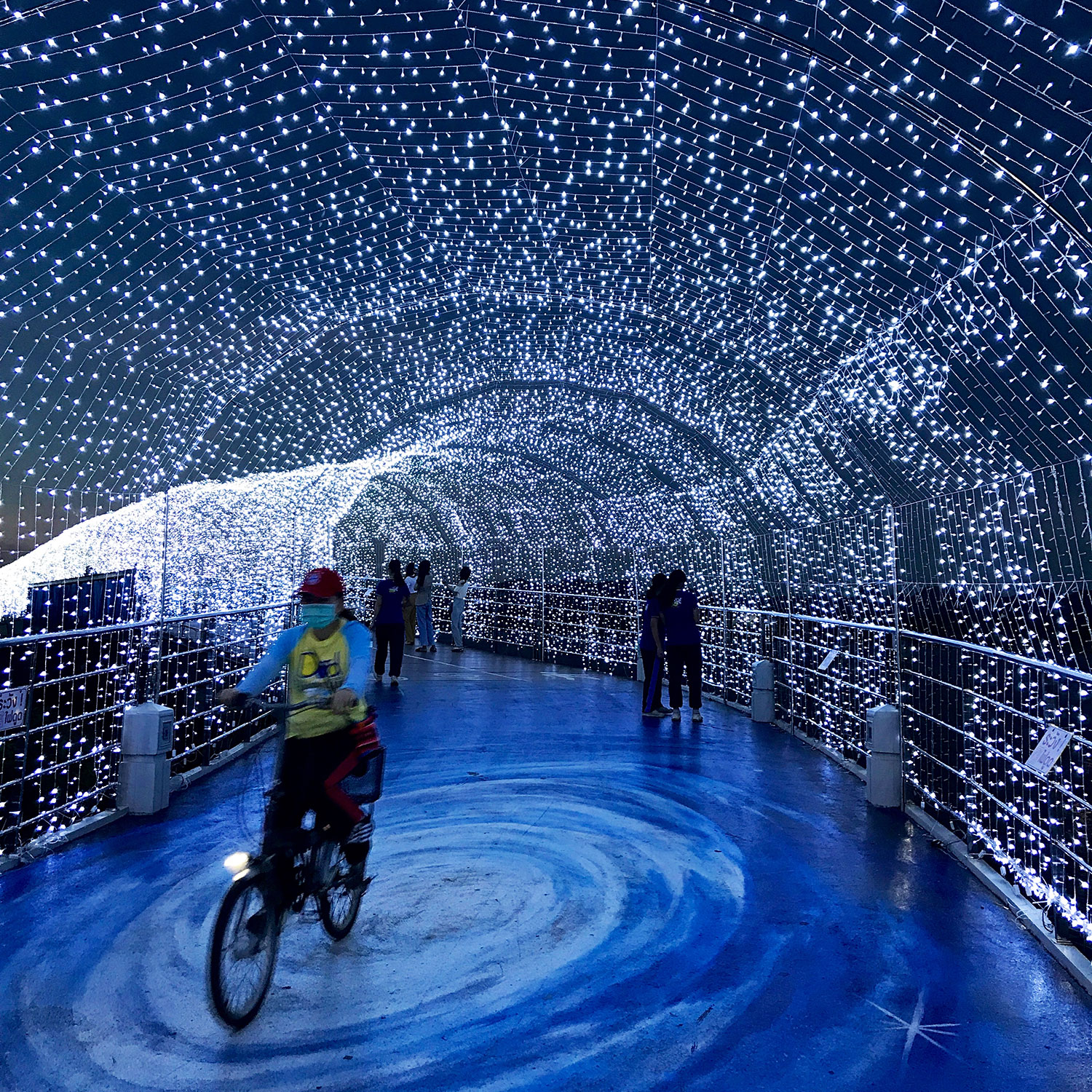 Decorative lights adorn a section of the bike lane not far from the naga sculpture of Phaya Sri Sattanakaraj. The path is called Sawan Chai Khong, meaning Heaven Along the Mekong River. 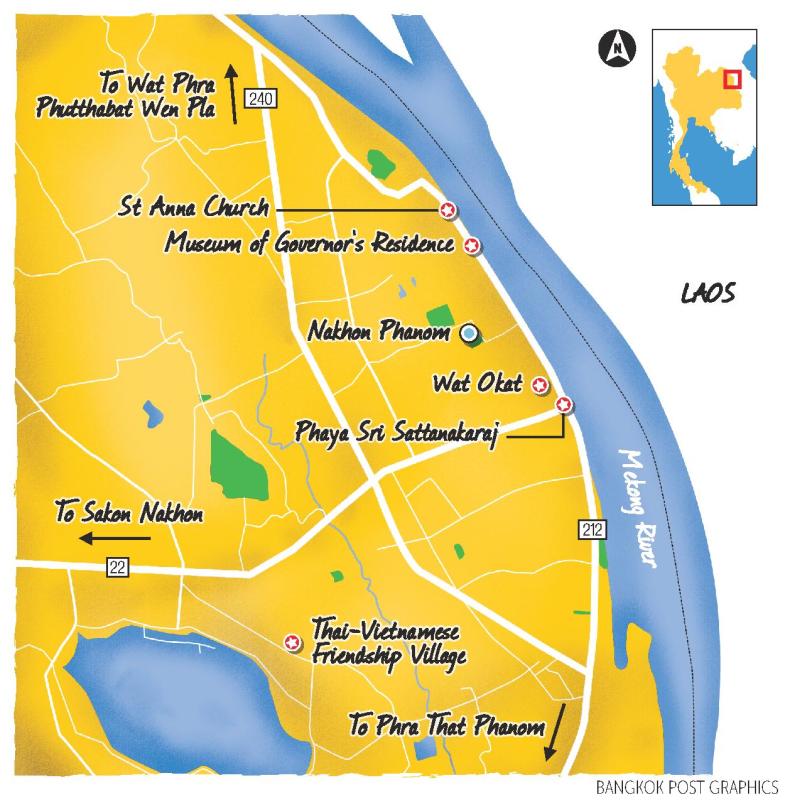