With the coming of the Chinese New Year, a trip to Bangkok's Chinatown should be on your calendar

Red paper lanterns are hung in rows inside the compound of the Tai Hong Kong shrine on Phlab Phla Chai Road in Chinatown. The smell of incense sticks infuses in the air. 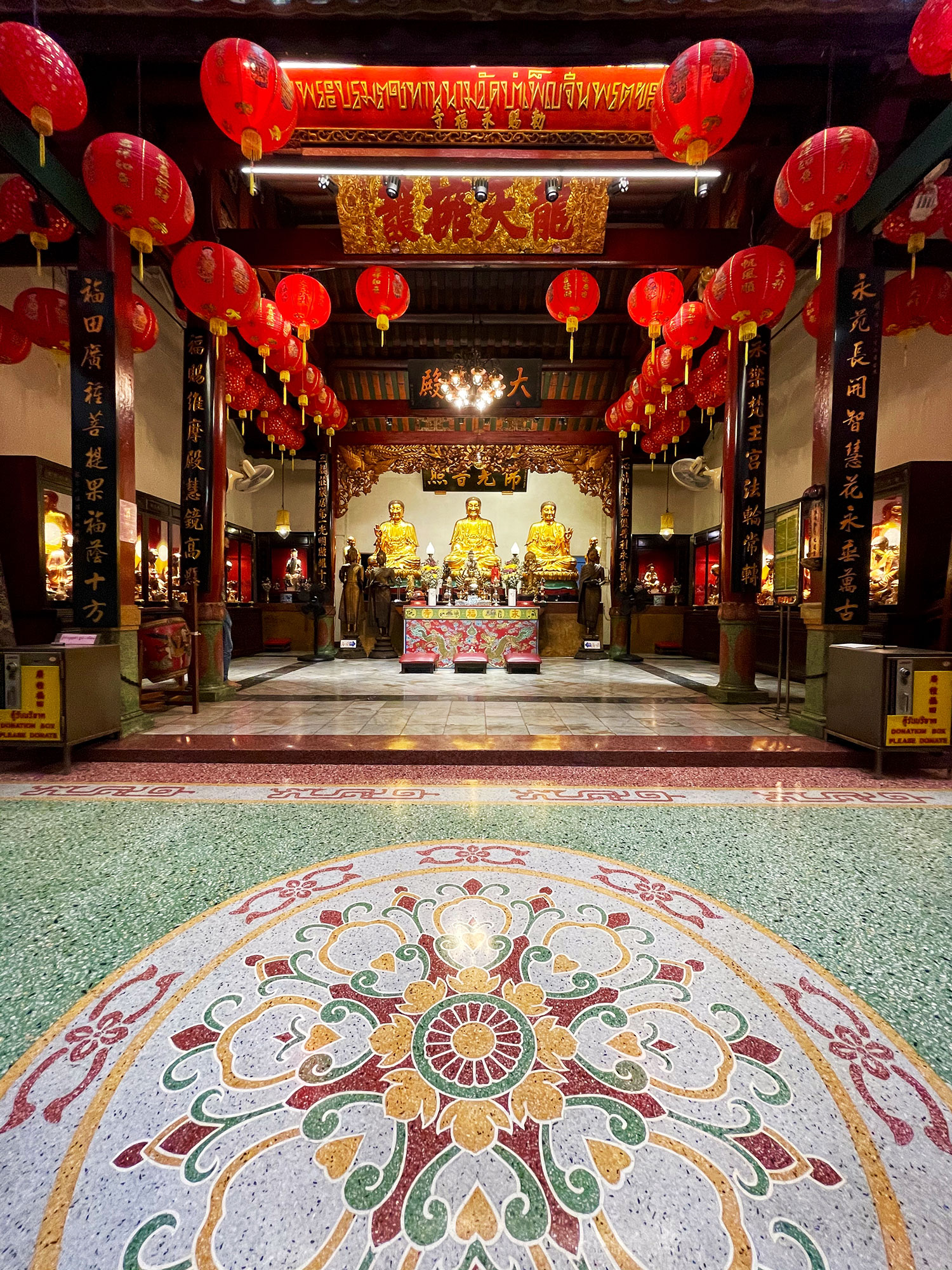 This simple prayer hall is located in Wat Bamphen Chin Phrot (Yong Hok Yi) on Yaowarat 8 or Trok Tao. It was once a shrine of Phra Avalokitesvara (Guan Yin) built by Chinese immigrants in 1795 or during the period of King Rama I. The shrine was abandoned for decades before it was restored by a Chinese monk named Sok Heng. Phra Achan Chin Sok Heng resided in the place in 1887 or during the reign of King Rama V. The monk named the temple Yong Hok Yi before receiving its Thai name from the king, Wat Bamphen Chin Phrot. A wooden board with the Thai name is displayed inside the hall. The prayer hall houses three seated Buddha images flanked by sculptures of 18 arhats. The sculptures were made of hemp fabric coated with resin and gold leaves.

I joined other worshippers in a queue for a temperature check and contact tracing registration before we were allowed to pay respect to the Tai Hong deity. During the Chinese New Year, which falls on Feb 12 this year, the place will be crowded as people want to pay respect to the revered monk to ask for good health, good fortune and make merit, a blessing for the start of the Year of the Ox.

The Tai Hong Kong shrine was built in 1909 by Chinese descendants who worshipped Tai Hong, the merciful monk who lived in Guangdong, a province of southeast China, more than 900 years ago. The monk helped the poor and the sick in many places as well as helped bury the dead who did not have relatives. His actions inspired his followers to establish many foundations. Among them is Poh Teck Tung Foundation, a large rescue and charitable organisation that was founded in Thailand more than a century ago

Normally, those who visit Tai Hong Kong shrine will donate money for purchasing coffins. They believe the donation can contribute to their longevity or ward off bad luck, especially for those who were born in pi chong (an inauspicious year). The term refers to those whose birth years are opposite of the coming ox year.

According to the Chinese Zodiac, the year that will be unlucky for the Year of the Ox is the Year of the Goat and followed by three more years with a lesser degree of misfortune including dragon and dog.

People born in those years will also visit Wat Mangkon Kamalawat, better known as Wat Leng Noei Yi, to join in a ritual that will offset their misfortune. (During the Covid-19 pandemic, the temple is closed every Friday for a big clean).

Many people believe that Wat Leng Noei Yi is the oldest Chinese temple in the area. But in fact, the longer-established one is Wat Bamphen Chin Phrot (Yong Hok Yi), a small temple in Trok Tao or Yaowarat 8. The temple was founded in the early Rattanakosin era and restored by Phra Achan Chin Sok Heng during the period of King Rama V. He became the first abbot of the temple. Later, the abbot wanted to expand the facility because Wat Bamphen Chin Phrot was too small to accommodate the monks residing in the place. He built Wat Leng Noei Yi in 1871 on Charoen Krung Road, which is about 230m away. The temple took about eight years to be completed and was later named Wat Mangkon Kamalawat by King Rama VI.

A short walk from Wat Mangkon Kamalawat is the old Charoen Chai community. It is known as a trading hub for joss paper. The community's history dates back to 1898 or during the reign of King Rama V, when shophouses were built in a small alley called Tong Heng Koi. The name means a long bamboo stick, which perfectly describes the alley that was straight and narrow.

Today, the community comprises about 80 households in a 5 rai plot of land owned by the Chumbhot Pantip Foundation founded by MR Pantip Paribatra. The place is quite crowded especially a week before the Chinese New Year. People want to shop for joss paper used as part of the New Year celebration as well as to buy other ritual-related paraphernalia such as lucky charms, ornaments of Chinese gods and crafted paper items like shirts, cars or smartphones for deceased relatives.

One of the attractions in the area is the Ban Kao Lao Rueang museum, founded in 2011 by Charoen Chai Conservation and Rehabilitation Group. The tiny museum exhibits the history of the community. You can find a map of attractions as well as the architectural blueprint of the shophouses.

A short walk from the museum is the famous Bamee Jabkang noodle shop, which has been opened for almost 60 years. It is a place where tourists like to challenge each other if they can finish an extra-large noodle portion.

Visiting Chinatown won't be complete without food shopping. Trok Issara Nuphap is one of the places where you can shop for fresh, dried or cooked food as well as numerous cooking materials and ingredients in the Leng Buai Eia market. You may like the almond milk of Chang Ha Heng, which has produced the fragrant drink under the Chang Pae brand for more than 90 years. Within a short walk, I filled my two shopping bags with a lot of food including fish balls, hoy jor (Teochew-style deep-fried crabmeat and shrimp dumplings), dim sum, fish maw soup, crabmeat and more.

Visiting the old part of Yaowarat, you too can start the Lunar New Year with blessings and happiness with choices of mouthwatering food you can share among family members. 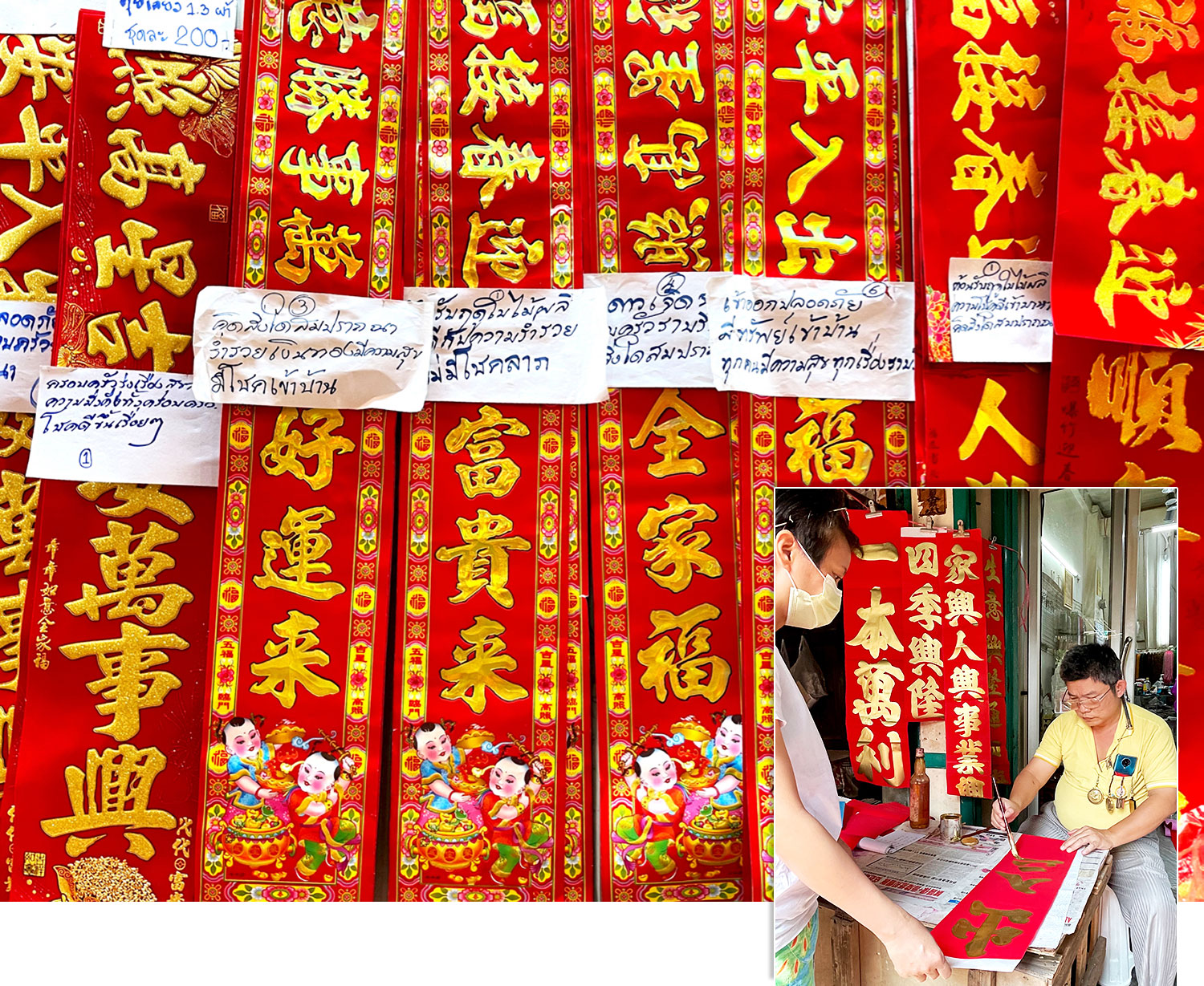 This man is writing Chinese calligraphy in Soi Charoen Chai, close to Bamee Jabkang noodle shop. Customers ask him for positive words such as prosperity, wealth and happiness in gold on red paper to welcome Chinese New Year. He will offer his service until a couple of days after the beginning of the ox year. Fees start from 60 baht. For those who look for a quick solution, you will find printed calligraphy at some shops in this community. Each has a Thai language translation for customers to select which words they want for home or office decorations. 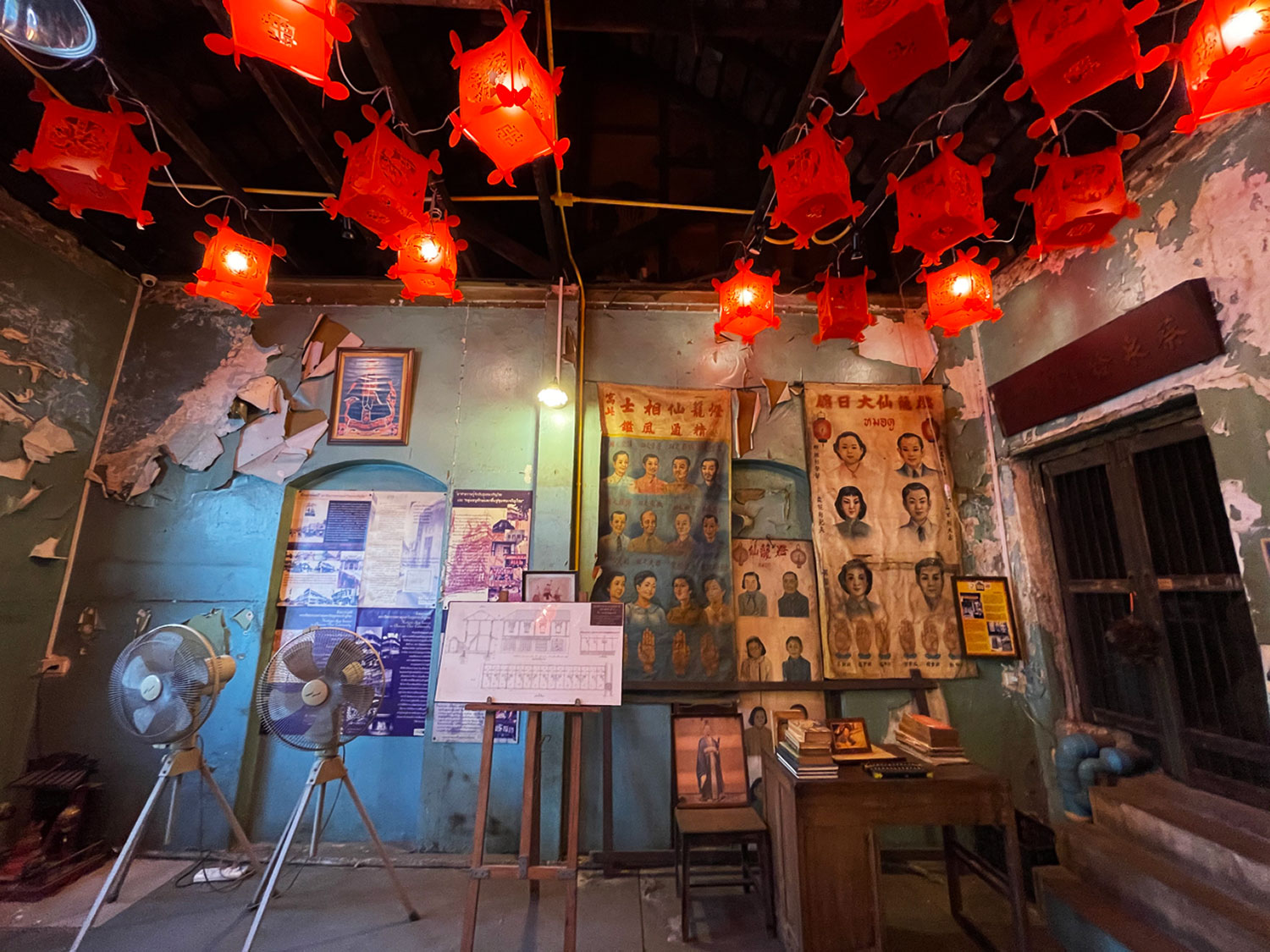 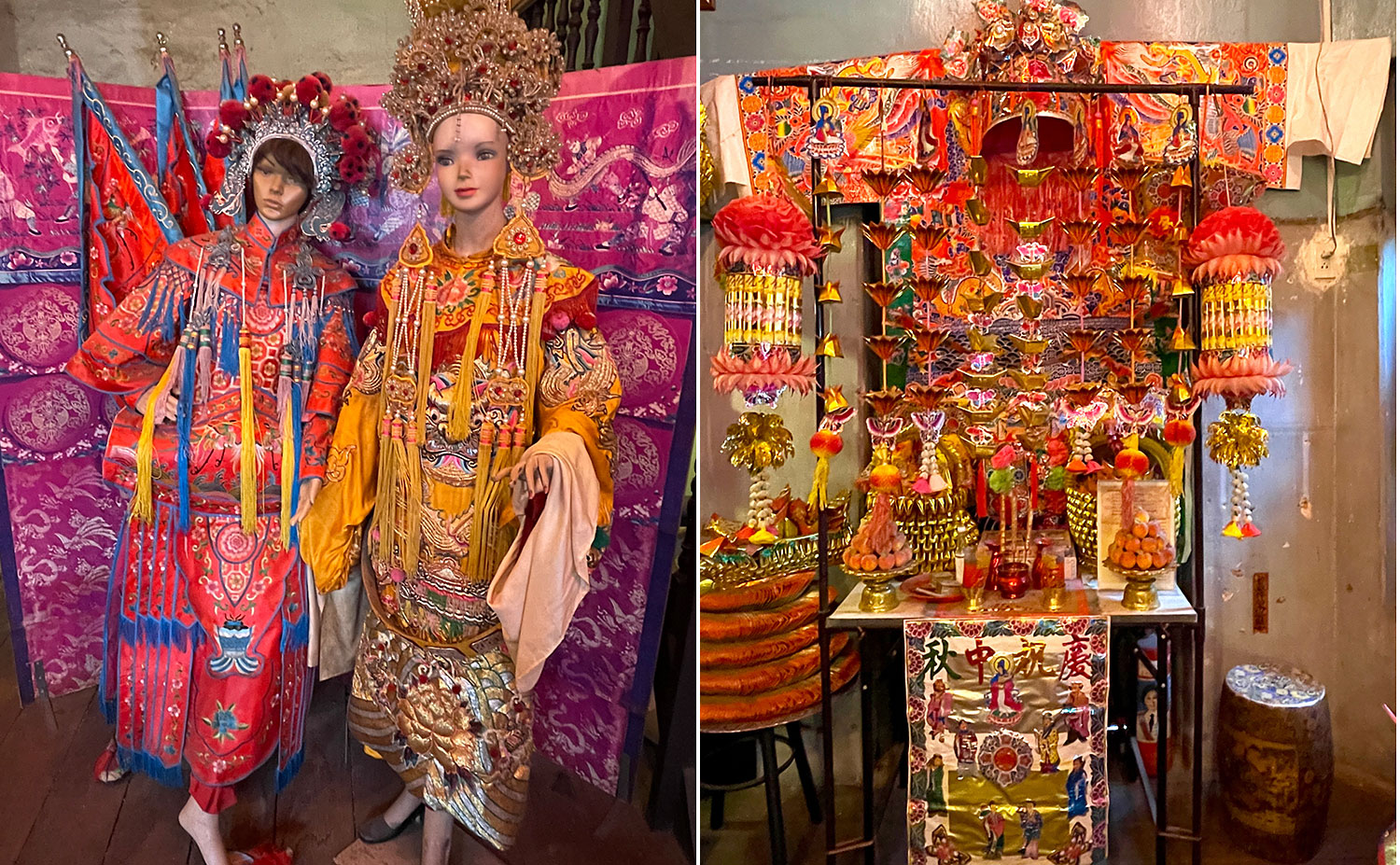 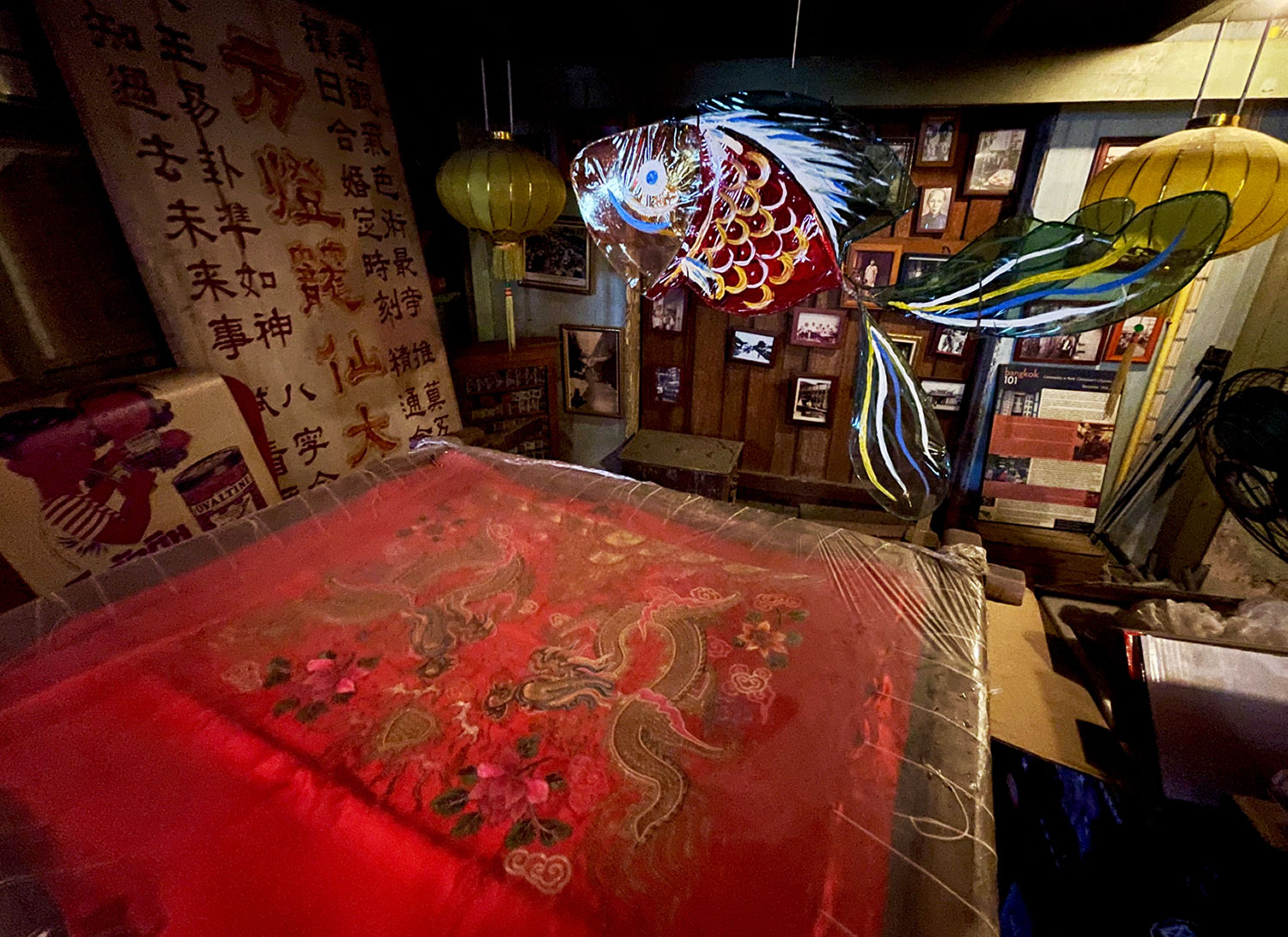 Opened in 2011, Ban Kao Lao Rueang is a privately-run museum set up by the Charoen Chai Conservation and Rehabilitation Group. It aims to share the history of the community with visitors. The museum is a one-room exhibition located on the 2nd floor of an old shophouse where Chinese opera performers lived. As a result, it displays samples of Chinese opera costumes and has a dressing room as well as other items donated by people in the community such as embroidered cloth, art pieces showing the Chinese paper cutting skills, full offerings for the Mid-Autumn Festival and a history of the Chumbhot-Pantip Foundation and its founder MR Pantip Paripatra. The foundation is the landlord of the community. The museum is open daily from 7.30am to 6.30pm. Admission is free. 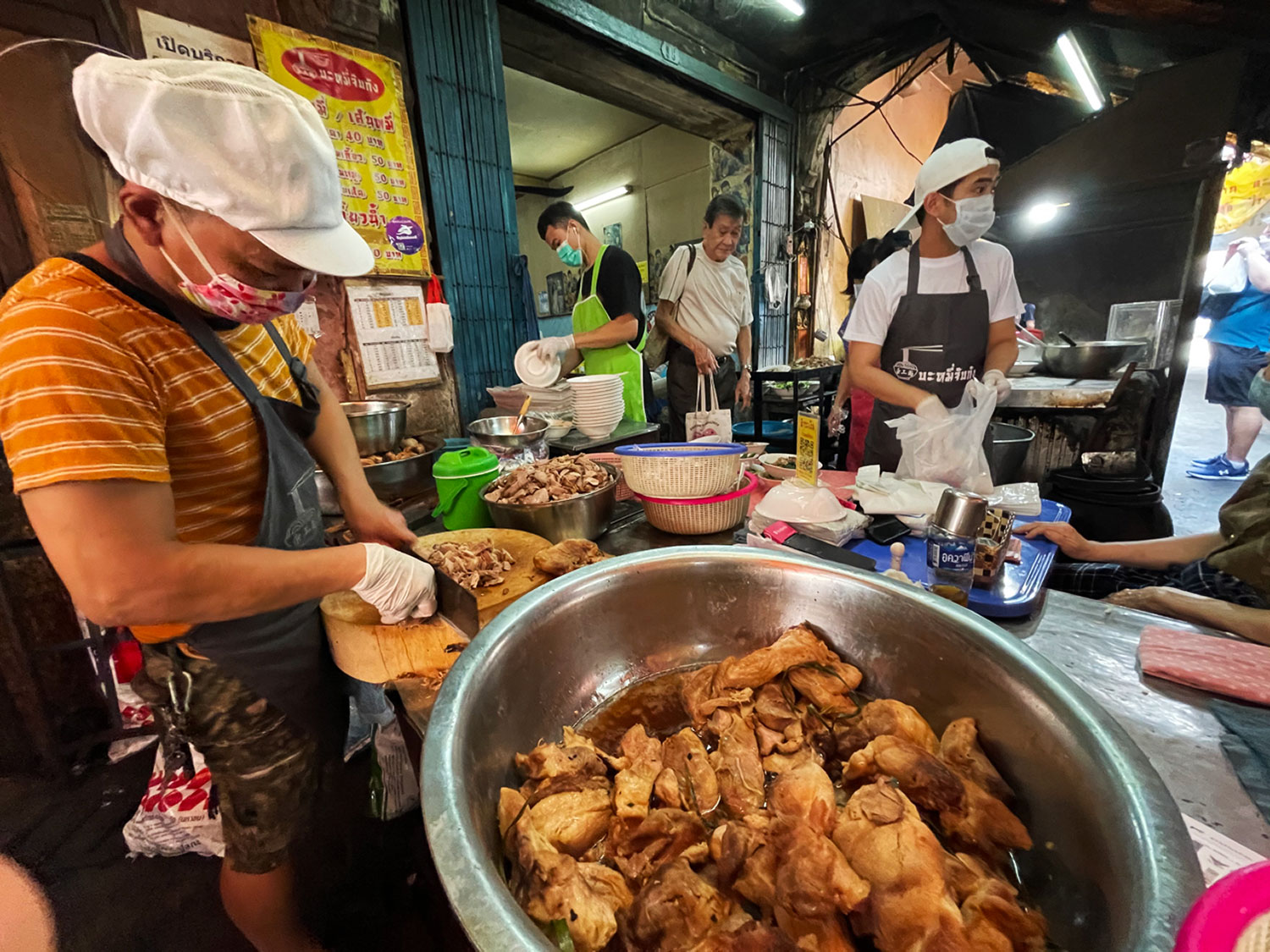 Bamee Jabkang is the name of this food stall and also the dish. As the name suggests, bamee is egg noodle and jabkang means labourers so each noodle bowl is served in a generous portion to make sure the labourers are full. The shop has been open for 56 years and it has been making its own noodles since the business started. Each noodle bowl is topped with sliced pork and pak choi. The price is only 40 baht and 50 baht extra large. The shop is open from 8am to 6pm. Close to the Bamee Jabkang shop is Giam-ee Je Chung noodle shop. This food stall has been open for more than 30 years. It is known for giam-ee (short and fat rice noodles) soup topped with pork, liver and entrails. The shop is open daily from 8am to 2.30pm. 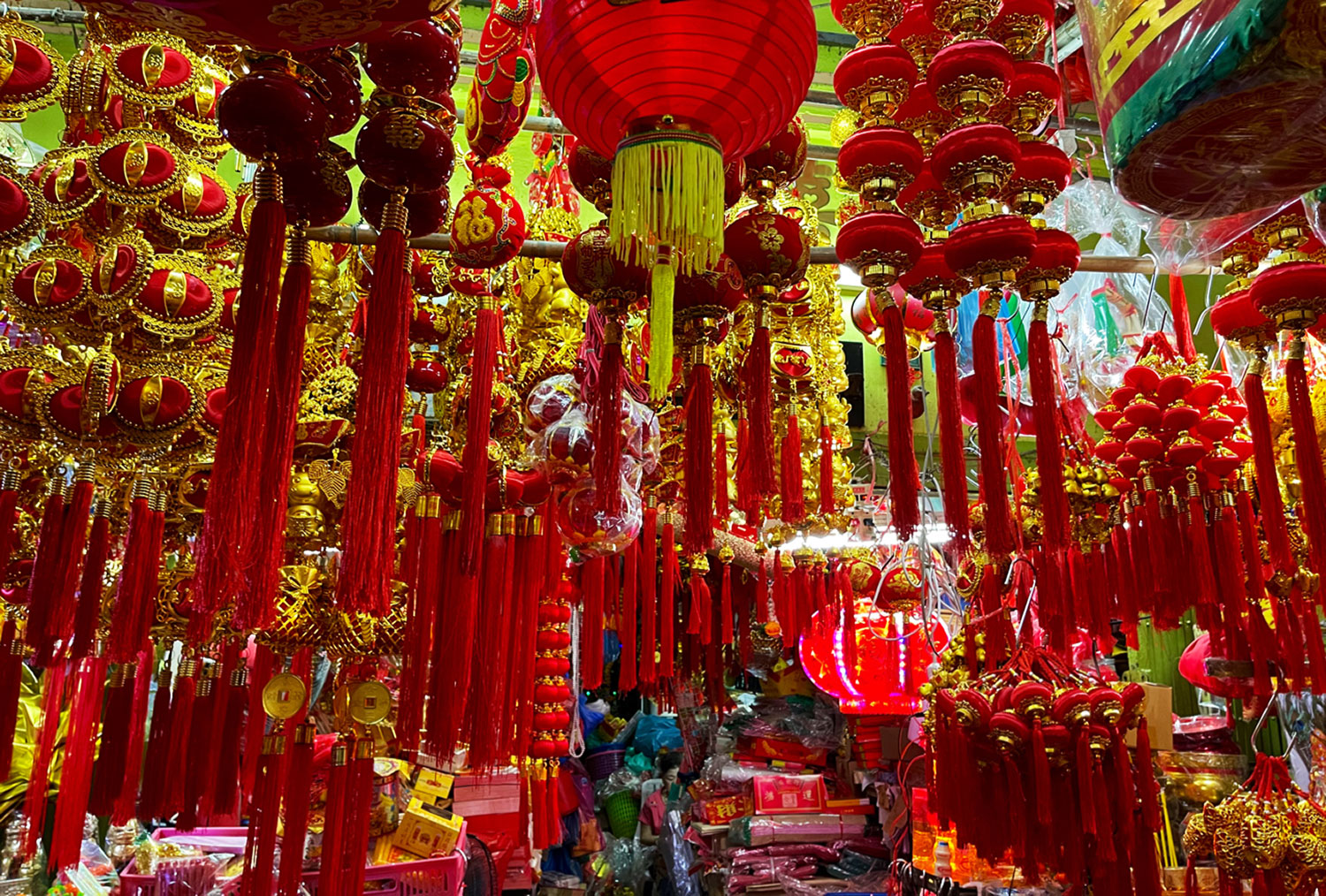 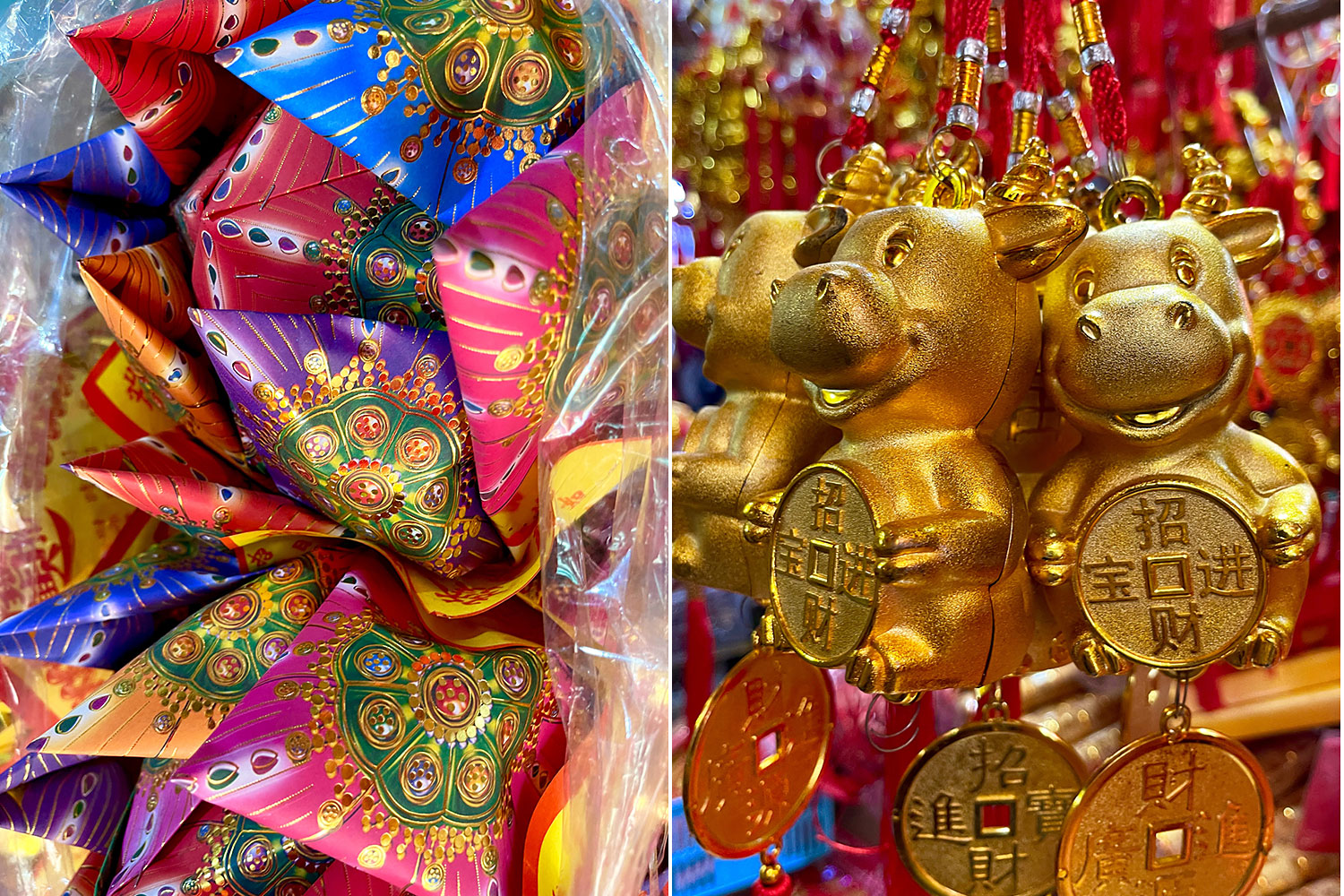 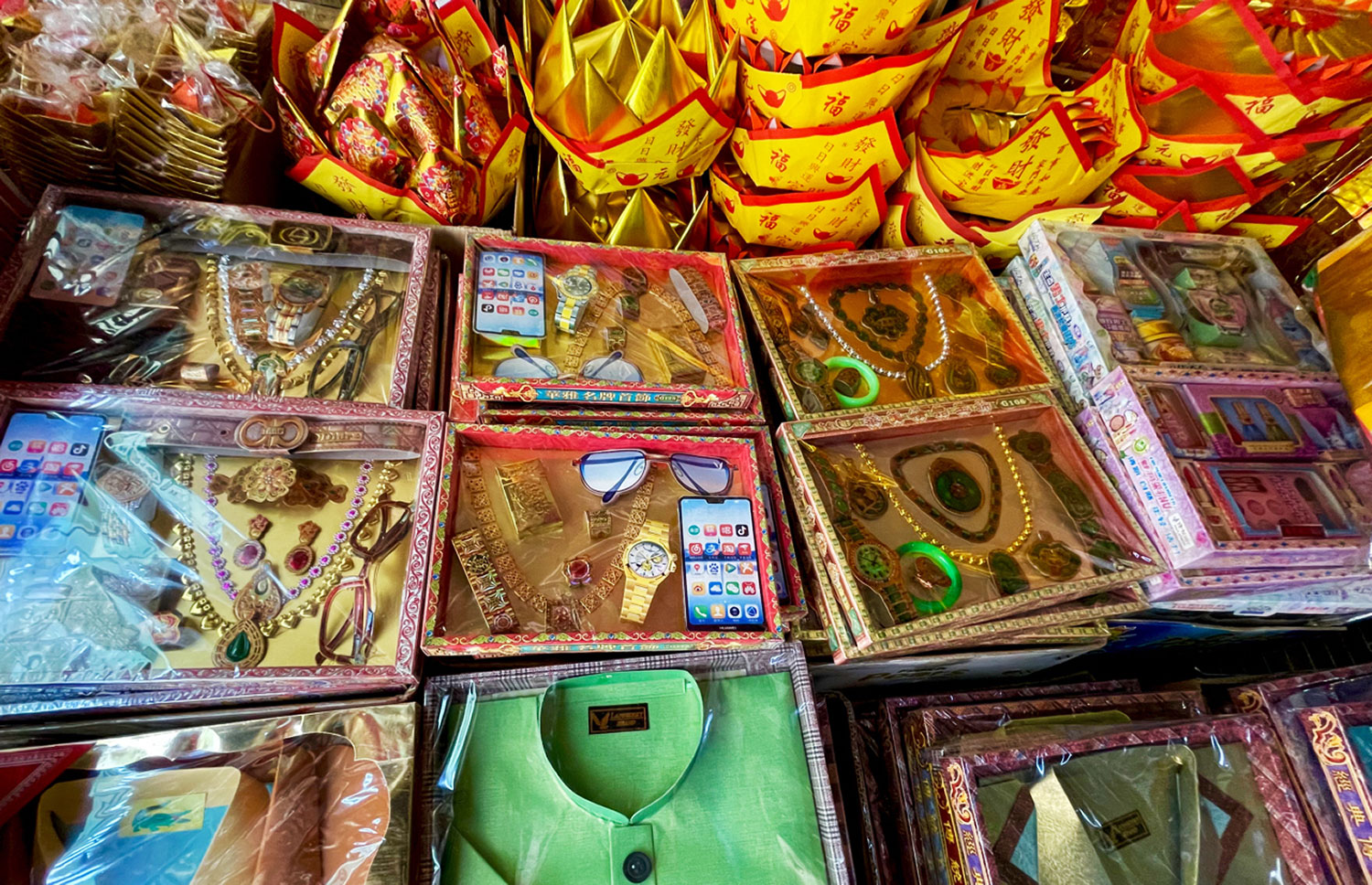 The Charoen Chai alley is a famous place for Thai-Chinese descendants to shop for joss paper. Choices are plenty ranging from typical silver and gold joss paper to a new version of colourful jewellery, clothes and fashion accessories. Burning joss paper is part of the Chinese tradition for family members to show gratitude to deceased loved ones by sending things they may use in the afterlife. Since the economic downturn, some shops have experienced slow sales. Some customers are also concerned about the environment and health as burning joss paper can contribute to the PM2.5 dust pollution. The shops on the alley are open daily because burning joss paper is part of several ceremonies and rituals including funerals or birthdays of relatives who passed away. 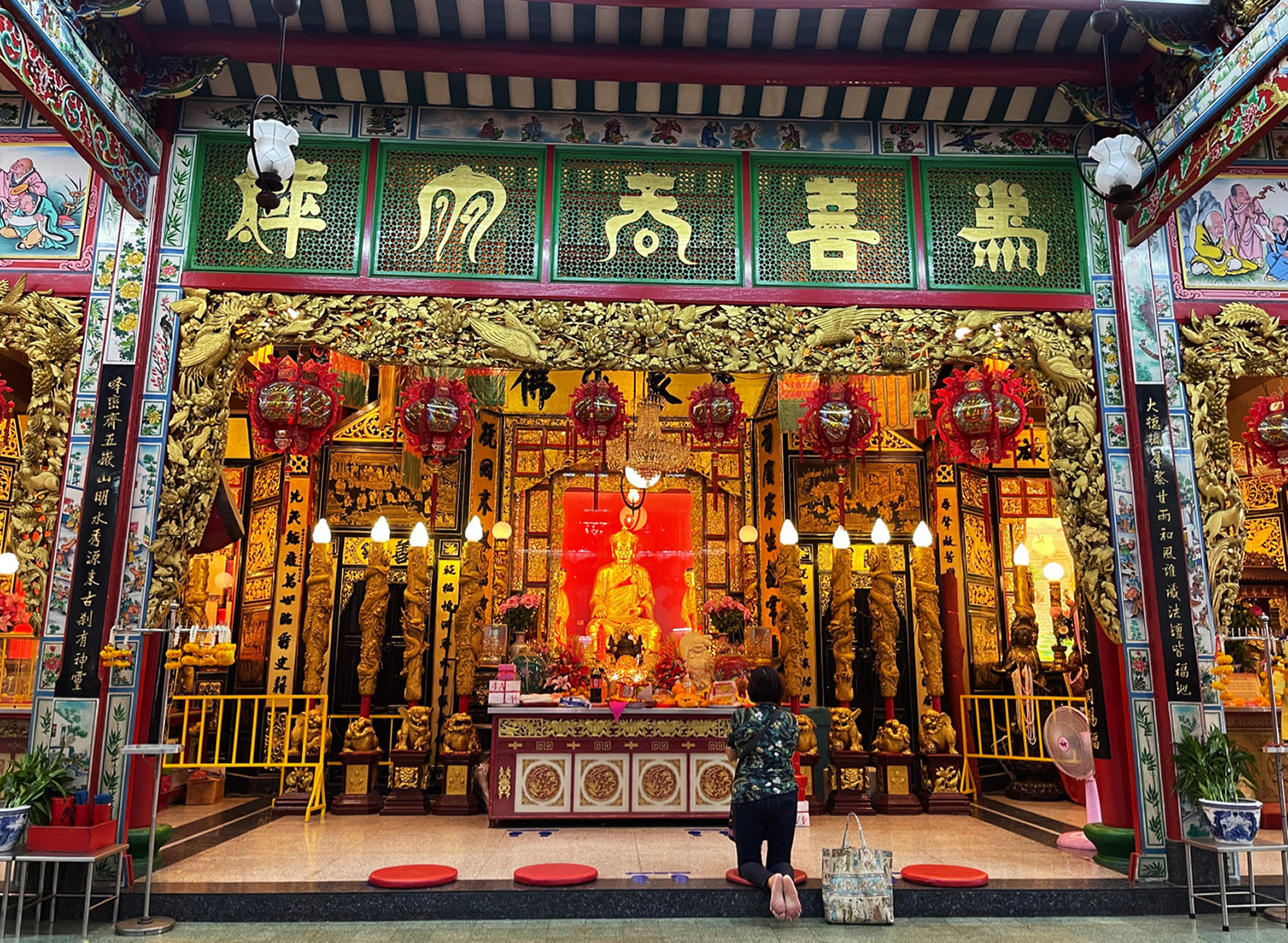 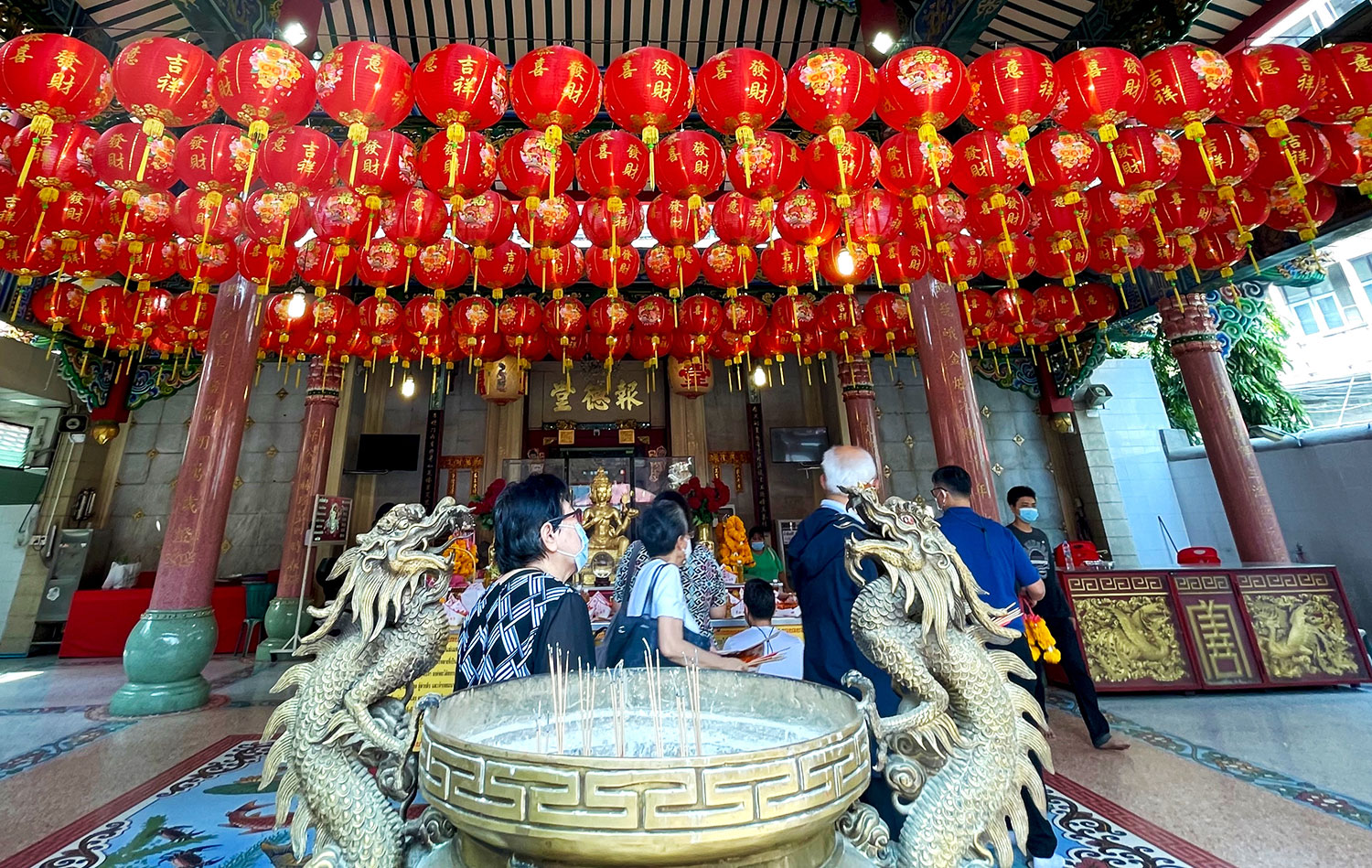 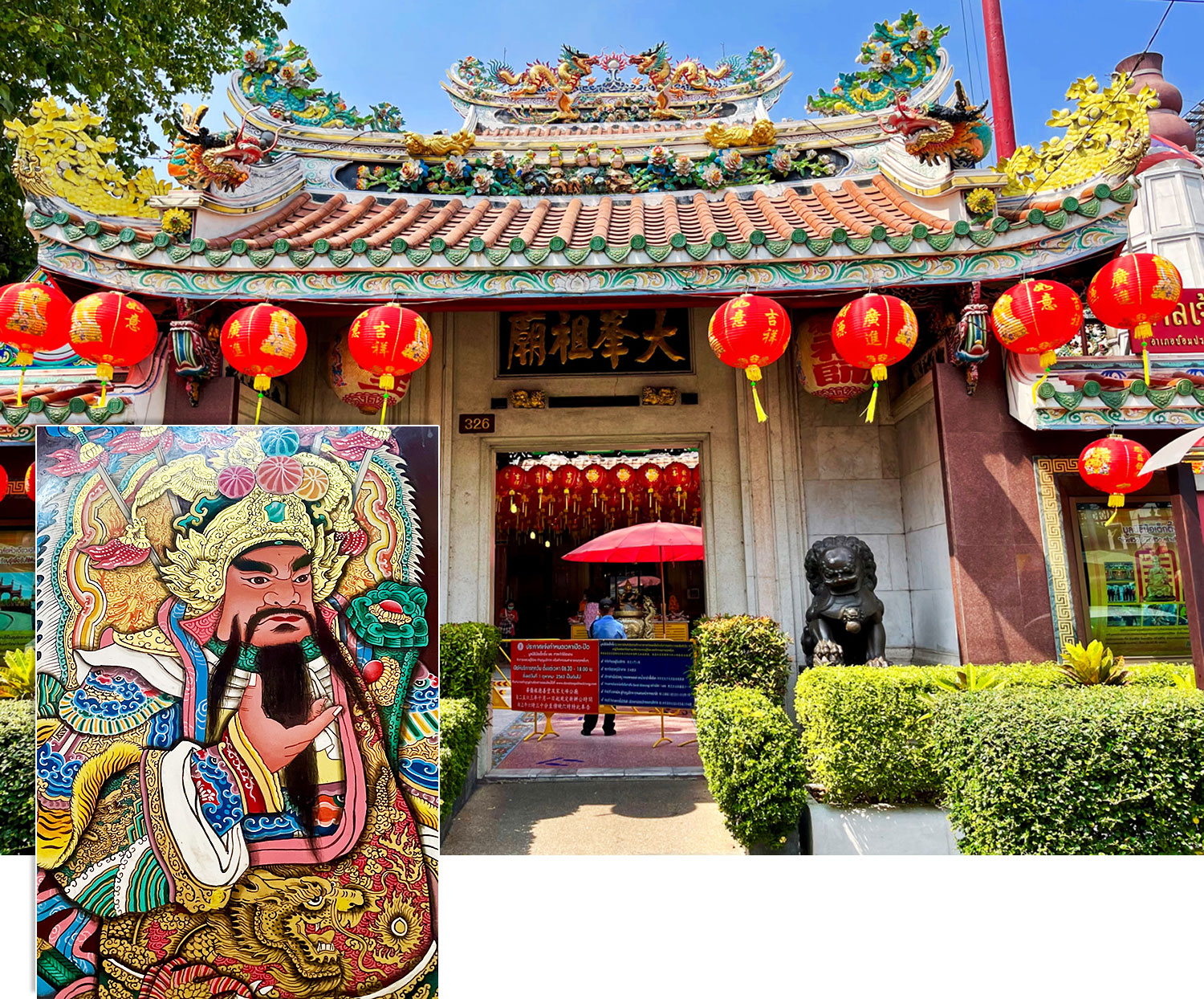 A woman pays her respect at Tai Hong Kong shrine. Worshippers visit the shrine to pray for good luck, prosperity, health and happiness. They line up in queues to donate money to the Poh Teck Tung Foundation located in the shrine. Donations are accepted online at donationpohtecktung.com or call 02-225-0020. 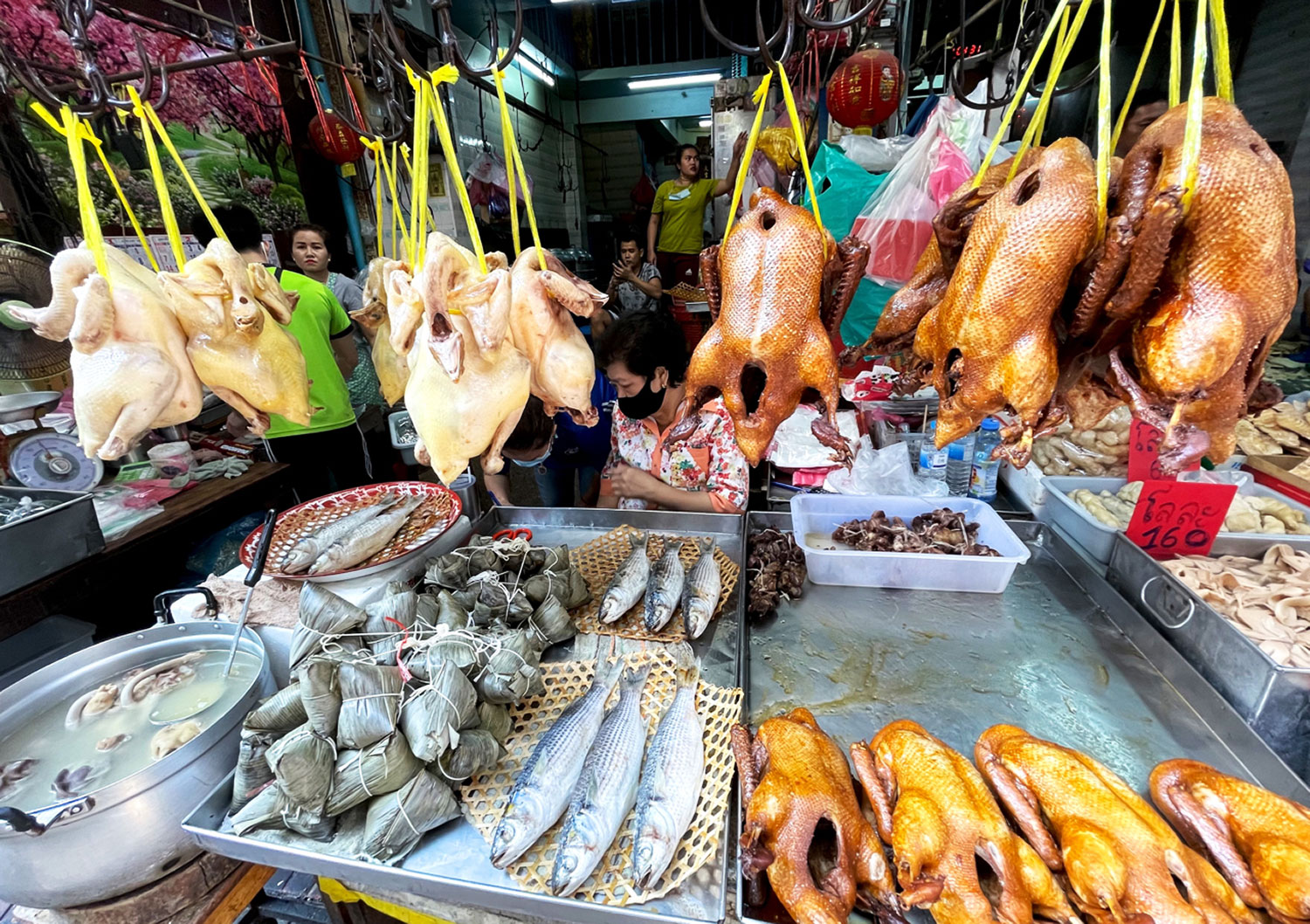 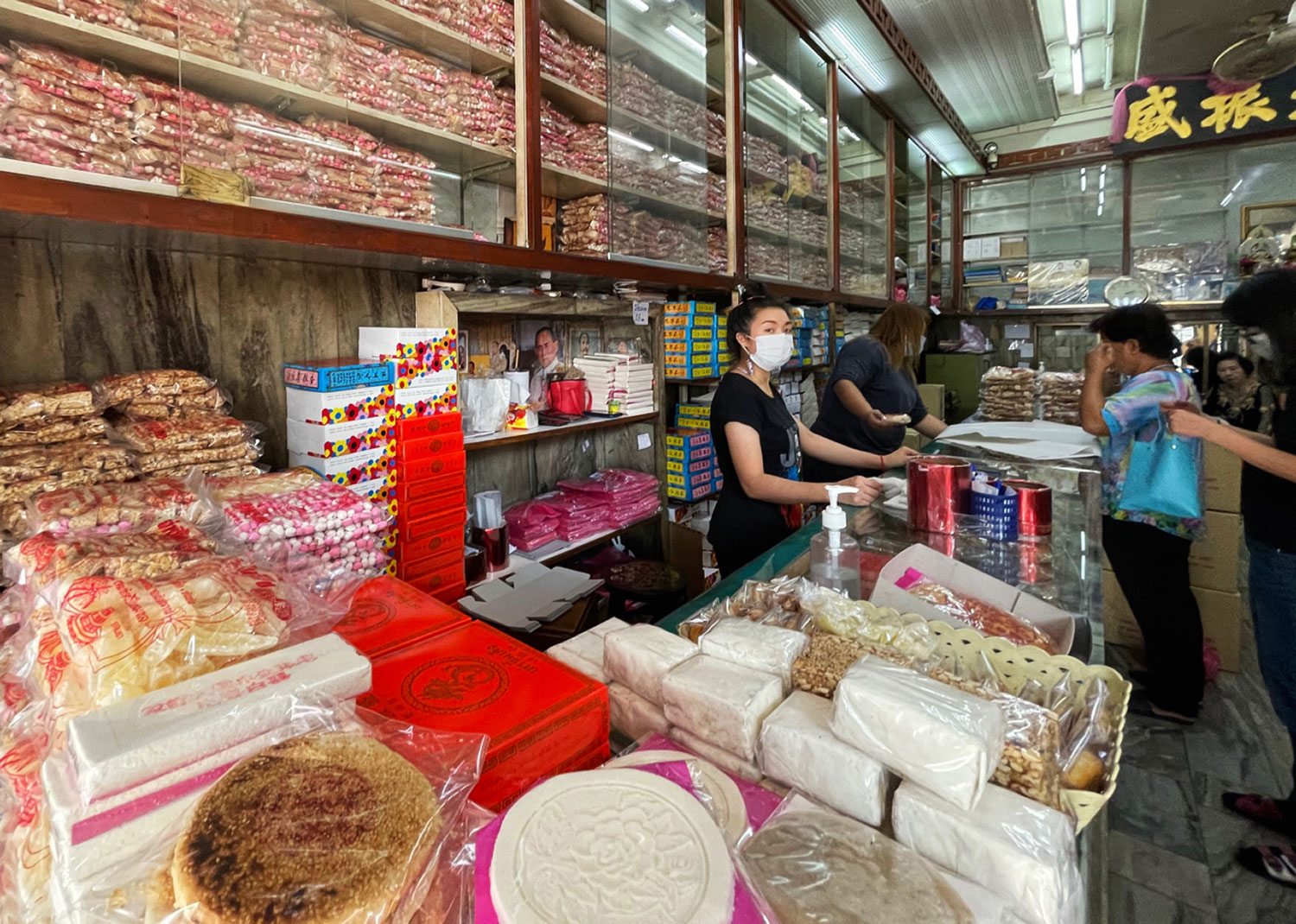 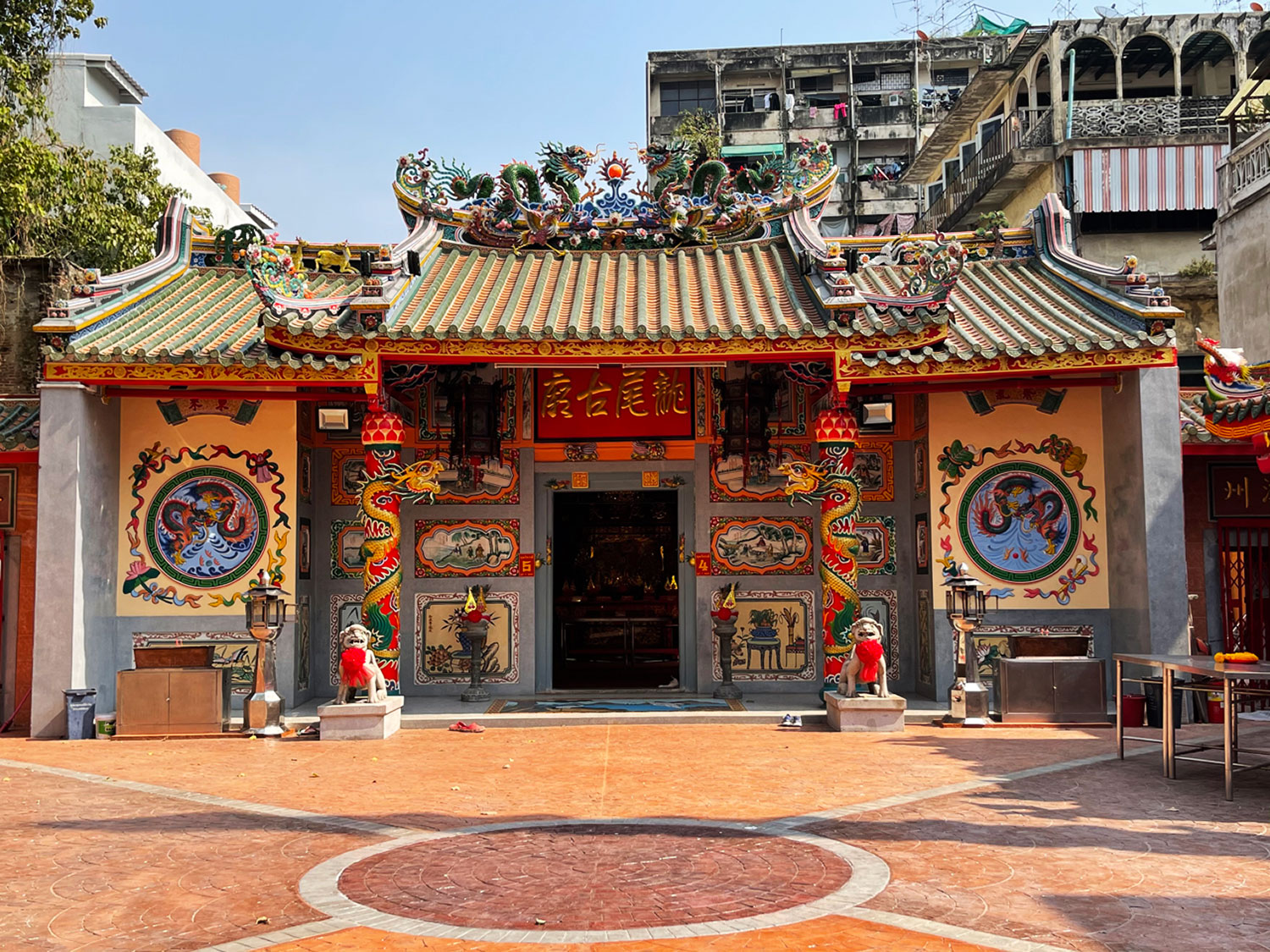 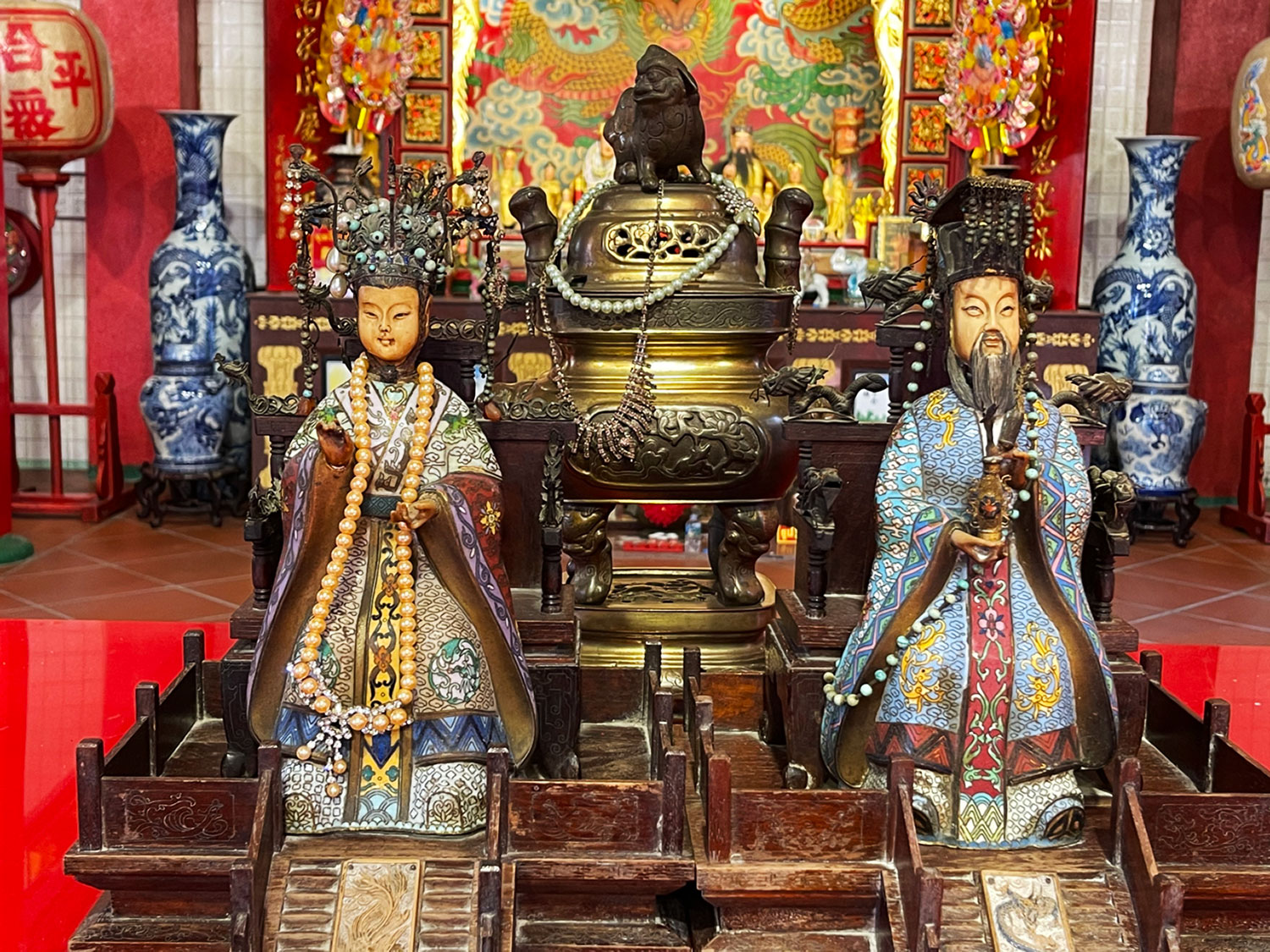 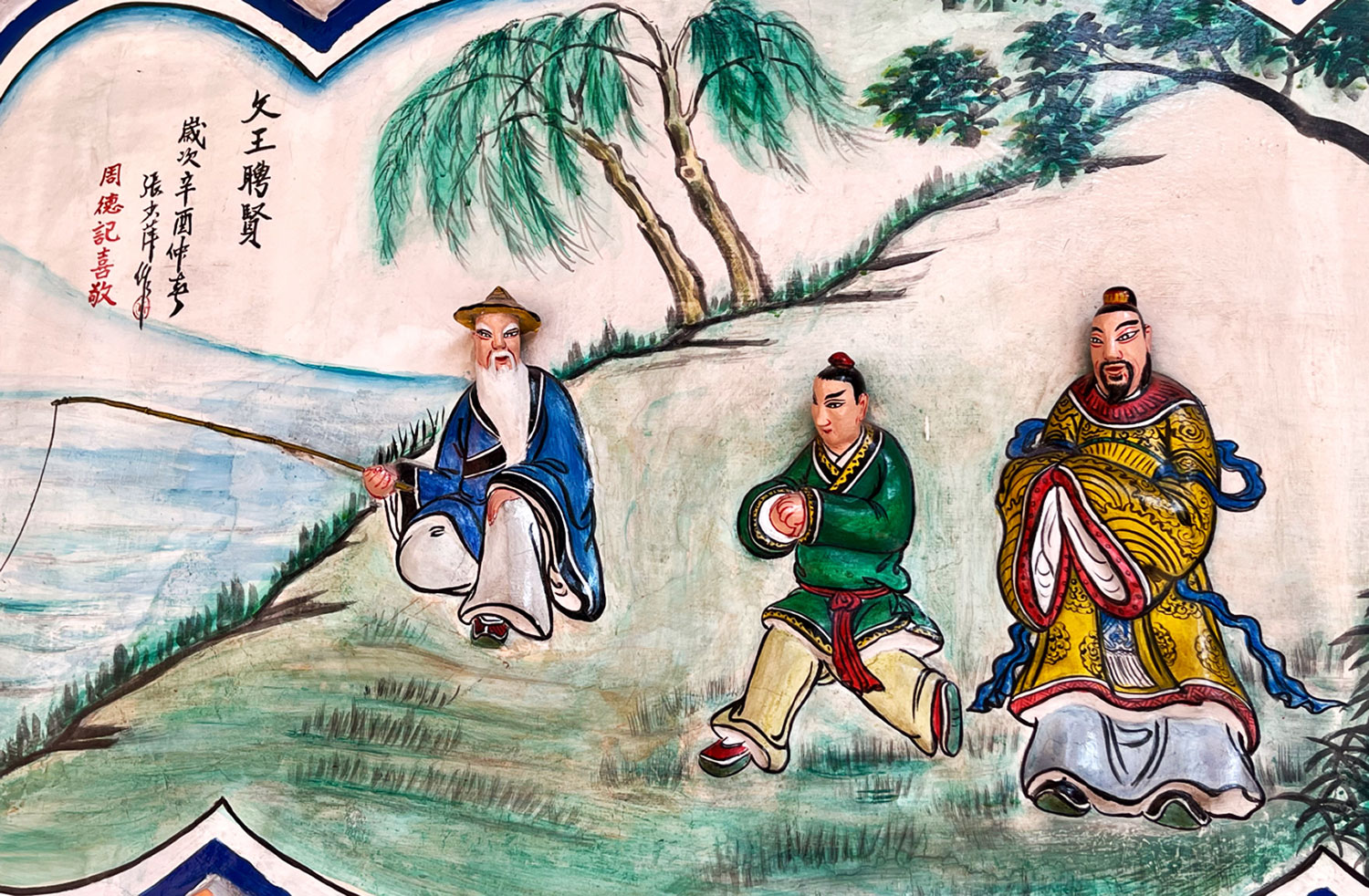 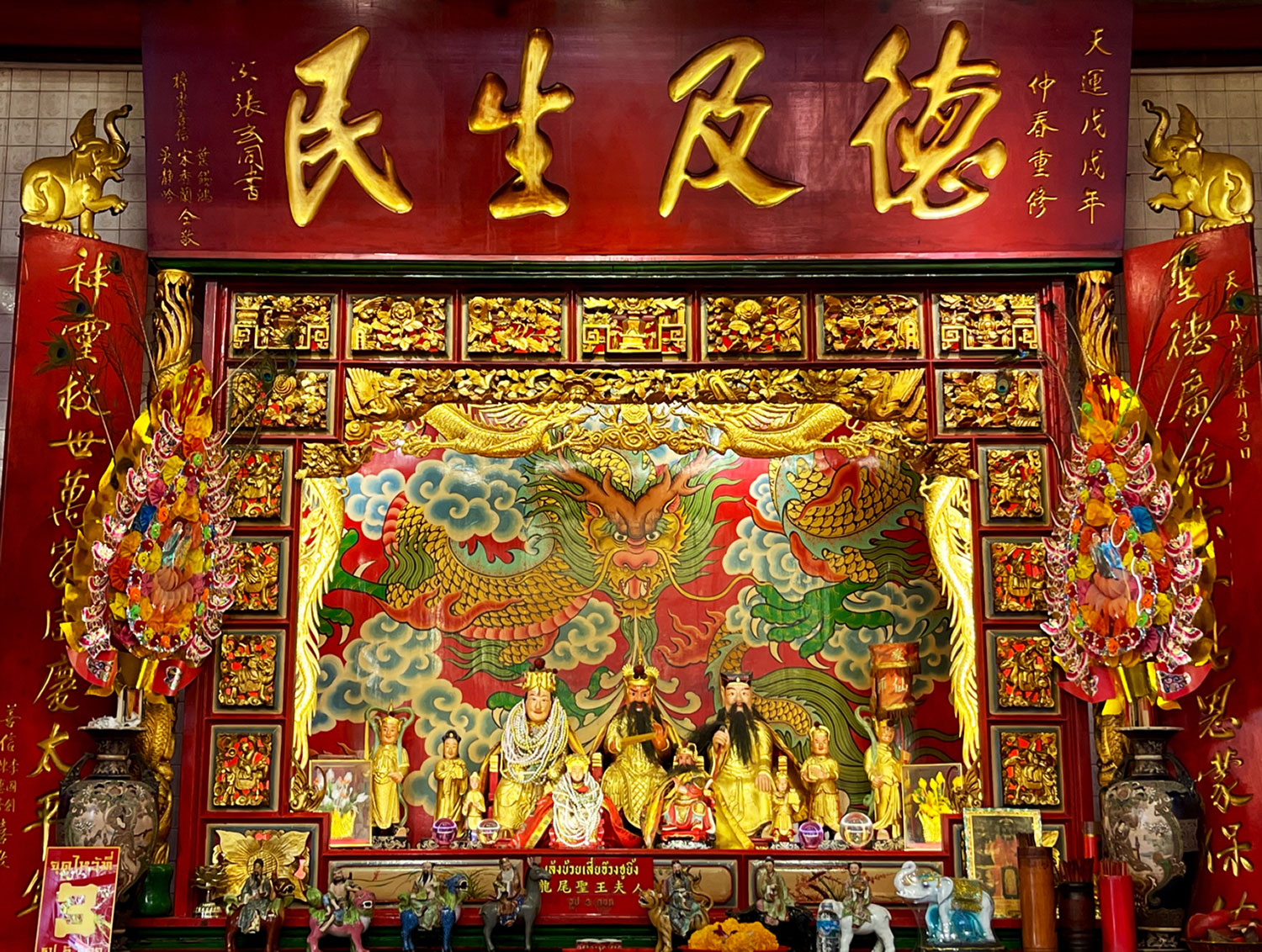 Located in Yaowarat 6, this shrine is named Leng Buai Eia. It is an old Teochew shrine. Its structure includes two dragon pillars flanking the entrance gate, two dragons facing a crystal ball on the top of the rooftop and dragon paintings in and outside the shrine. Worshippers visit the shrine to pay respect to Leng Buai Eia deity for prosperity. 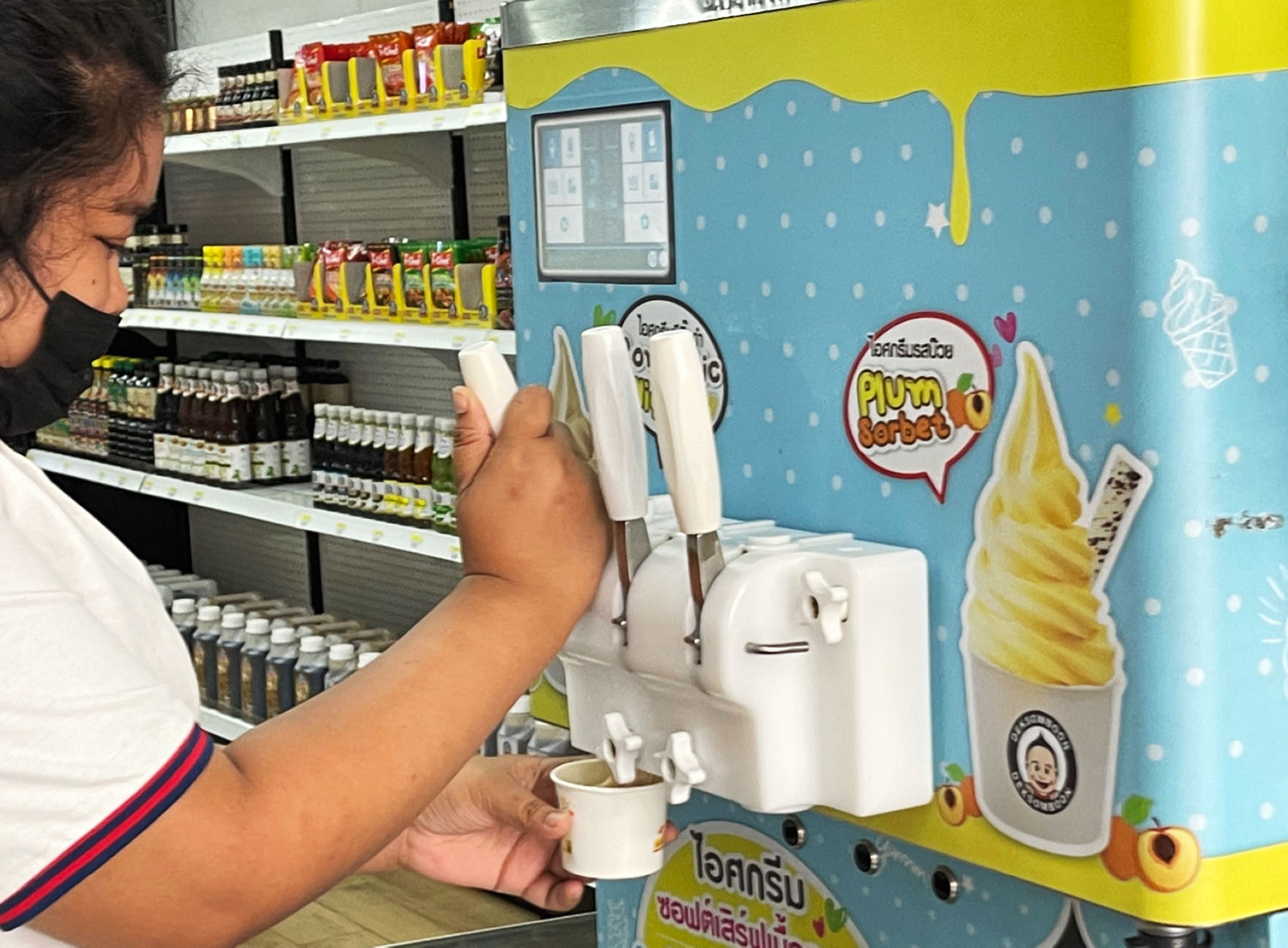 This soft-serve ice cream (20 baht) has a mild salty and sweet taste, it is black soy sauce flavour. It is produced by Yan Wal Yun, a leading soybean sauce producer and available at Dek Somboon shop on Yaowarat Road, almost opposite Plaeng Nam alley. The salesperson told me to add soy sauce on top to enhance the taste. I also tried taojiao or soybean paste in a small cup (40 baht), which was surprisingly tasty, similar to butterscotch. The cashier told me that the soybean paste is one of the best sellers. The shop also has three more signature flavours including black soy sauce and butter, black soy sauce and peanut and plum sorbet. 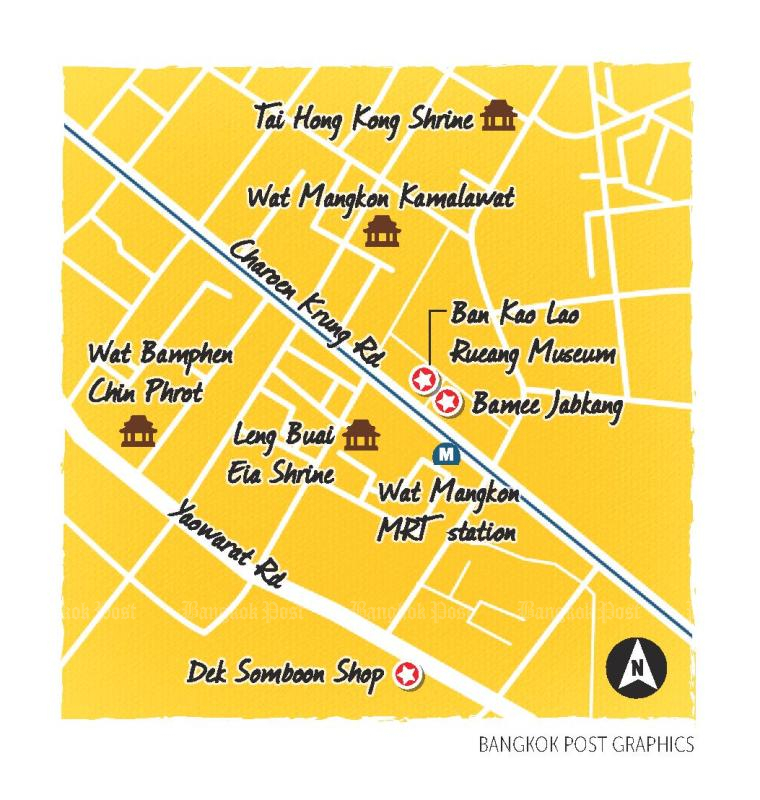