published : 15 Apr 2021 at 04:00
newspaper section: Life
writer: Karnjana Karnjanatawe
Wat Kanlayanamit Woramahavihan is built in classic Chinese and Thai architecture, which was popular during the reign of King Rama III.

The seated Buddha image of Phra Buddha Trai Rattananayok, also known as Phra To or Luang Pho To, is majestic. The statue is housed in a vihara (prayer hall) at Wat Kanlayanamit in Thon Buri on the west bank of the Chao Phraya River.

"Luang Pho To is the largest seated Buddha image posturing in pang man vichai [the attitude of subduing Mara] in Bangkok," said Krit Sathitprayut, my guide.

People believe that worshipping the image will bring them good fortune in friendship as well ensure a safe journey, he said.

The temple was our first stop in a one-day cruise trip along the Chao Phraya River organised by Chao Phraya Express Boat and supported by the Tourism Authority of Thailand.

"We all like to start our new year with good karma so we have organised the trip for people to make merit and to receive blessings in five well-known temples in Bangkok, Nonthaburi and Pathum Thani," Krit said.

A double-decker boat, which can accommodate about 140 passengers, was used for our journey. The first floor is air-conditioned while the upper deck is open-air and does not have a roof. The vessel has separate toilets for males and females. 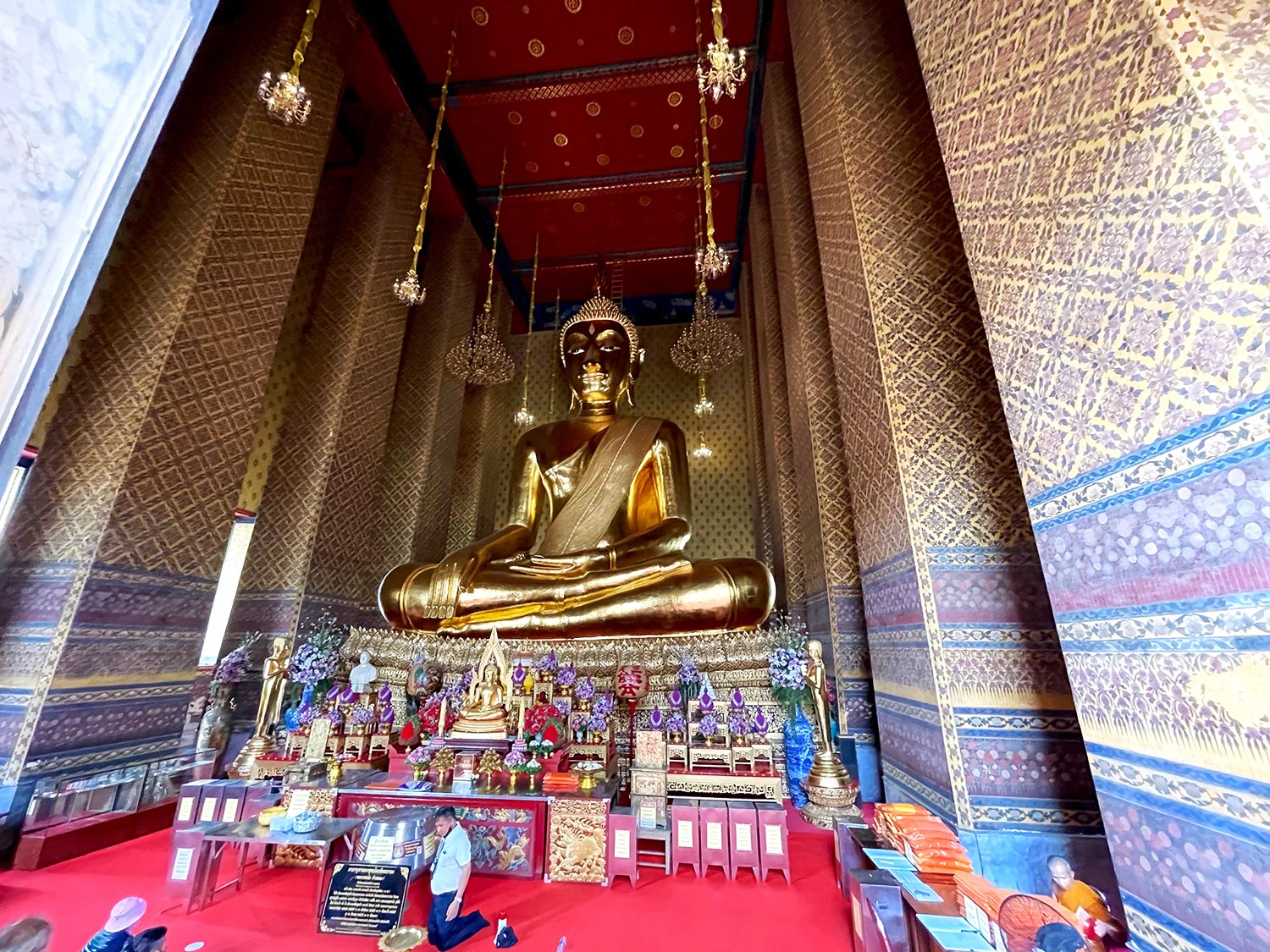 The main prayer hall of Wat Kanlayanamit is home to the towering statue of Phra Buddha Trai Rattananayok, which was inspired by the principal Buddha image of Wat Phanan Choeng in Ayutthaya.

When our tourist boat docked on a pier, all passengers went directly to the prayer hall to worship Luang Pho To. Wat Kanlayanamit was built in 1825 by Chao Phraya Nikorn Bodin. He was a high-ranking Chinese official during the reign of King Rama III. He had bought a piece of land near his house to build a temple. When construction was completed, he presented the temple to the king as a gesture of friendship and hence the king named the temple Kanlayanamit, which means "good friend".

The monarch also wanted a huge seated Buddha image to be built along the river to protect people, similar to Luang Pho To of Wat Phanan Choeng, which is a riverfront temple in Ayutthaya. The Buddha sculpture in Ayutthaya was built in 1324 and the size is 19.13m tall and 14m wide. On the other hand, Luang Pho To in Bangkok was built 500 years later. The Buddha image here is 15.45m tall and 11.75m wide. Locals refer to the image as Luang Pho To and King Rama IV later gave it the official name Phra Buddha Trai Rattananayok. The statue is famous not only among Thais but also Chinese pilgrims to Thailand.

Another highlight at Wat Kanlayanamit is Phra Palilai, the principal Buddha image in the ubosot (an ordination hall). The seated statue has a rare posture with the Buddha seated and his legs hanging down. His feet are resting on a lotus while both of his hands are on his knees. The right palm is open, a gesture that signifies receiving offerings. By the front of his right foot is a seated elephant sculpture offering water in a container. Meanwhile, a monkey sculpture sits by his left leg and can be seen offering a honeycomb. You may not see the animals from the front as there is another seated Buddha statue before the image. Once you are inside the ordination hall, take time to see the mural. It depicts the stories of the Buddha as well as the way of life of people living in the early Rattanakosin period.

From Wat Kanlayanamit, our boat headed to Wat Bot in Pathum Thani. The journey was about two hours. It was a time to relax for passengers and enjoy the views along the river. Our boat passed many temples, bridges as well as the new parliament building which will officially open next month. 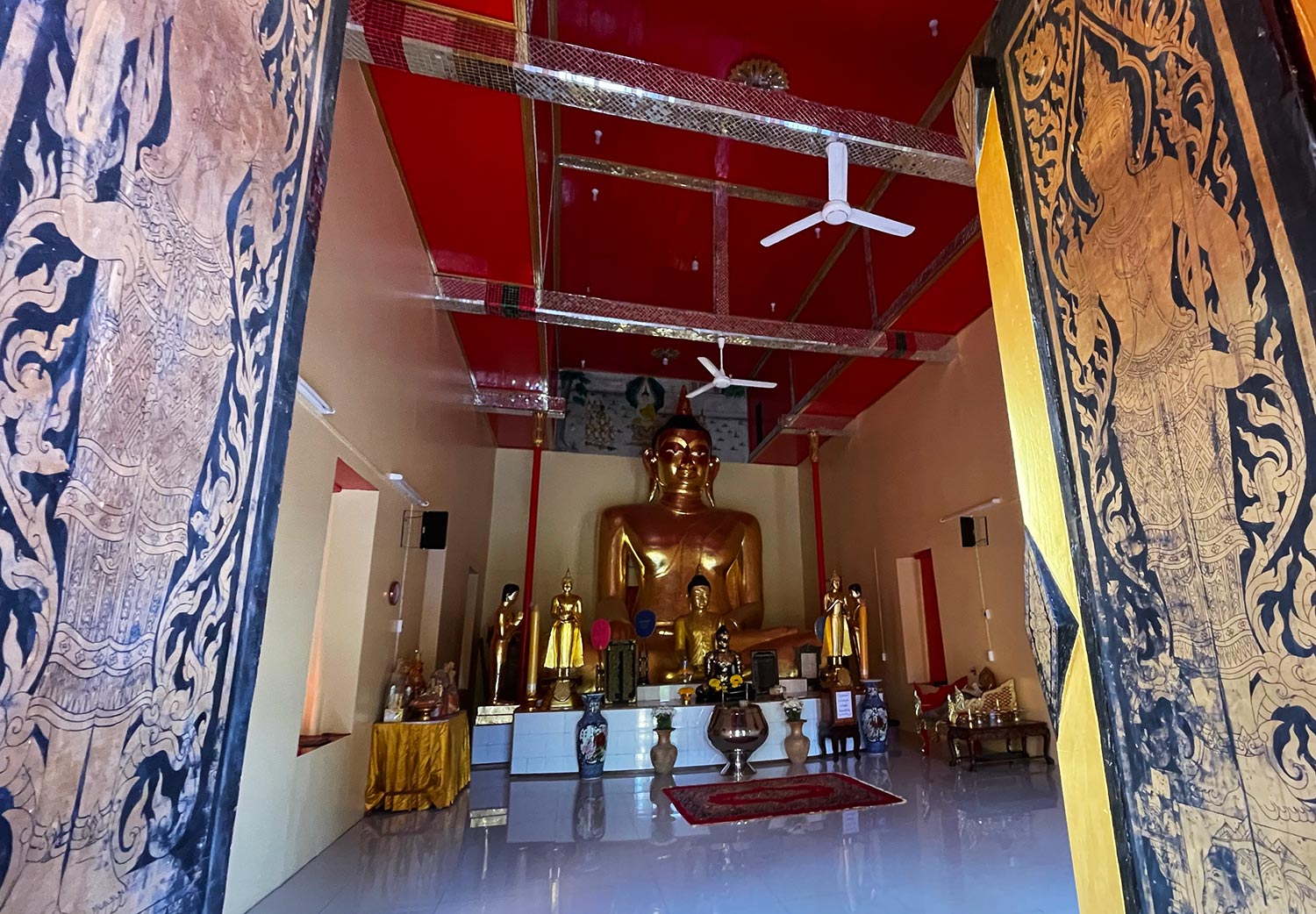 Luang Pho To is the principal Buddha statue at Wat Daeng Thammachat. It is believed that the sculpture was built in the same period as the temple or during the Ayutthaya era.

As our boat was approaching a tug boat dragging sand barges, it slowed down to prevent a strong wake. Later, we passed Koh Kret, the river island in Nonthaburi. Our guide pointed out the leaning white pagoda of Wat Poramaiyikawat, an iconic attraction of the island. The temple was built in the Ayutthaya period and is one of the most important temples in the province.

Soon our tourist boat was moments away from docking at the pier of Wat Bot in Pathum Thani's Sam Khok district. The wind had become strong and the cloudy sky even darker.

Wat Bot is an old temple that was built in 1621 by the Mon ethnic group. The temple houses a highly revered Buddha seated statue called Luang Pho Luea. Locals call the sculpture by its name because of an incident in 1964 when thieves broke into the temple and cut the heads of all Buddha images in the prayer hall, except for one image which was left untouched. Thus, locals call the sculpture Luang Pho Luea, meaning the leftover Buddha image. They also believe that worshipping the image will guarantee a safe journey, success in business, and prosperity in life.

Luang Pho Luea is housed in a prayer hall built in front of the gigantic seated Buddha image called Luang Pho Sothon. People had queued to buy flowers and incense sticks inside the hall.

After praying, I followed the queue of people to apply gold leaf on the sculpture of Luang Pho Luea. The whole image is heavily coated with gold leaf, an indication of the image's popularity.

Not far from the hall was a market. As I began to look for something to eat, the rain began and within a few minutes, it became a downpour. Our guide told us that we had to leave soon to keep up with the schedule. We waited about five minutes but the rain did not stop. We then quickly walked and ran to the pier to board the boat. I was soaked.

Another hour later, our boat docked at the pier of Wat San Chao in Pathum Thani's Muang district. Here, the temple has a riverside market with an eating area where you can order pork noodle soups or skewered pork satay with peanut sauce from two vendors. The market also houses dozens of food, snack and good stalls such as two kui chai (steamed Chinese chive dumplings), kluay tod (deep-fried banana) or fresh fruits. 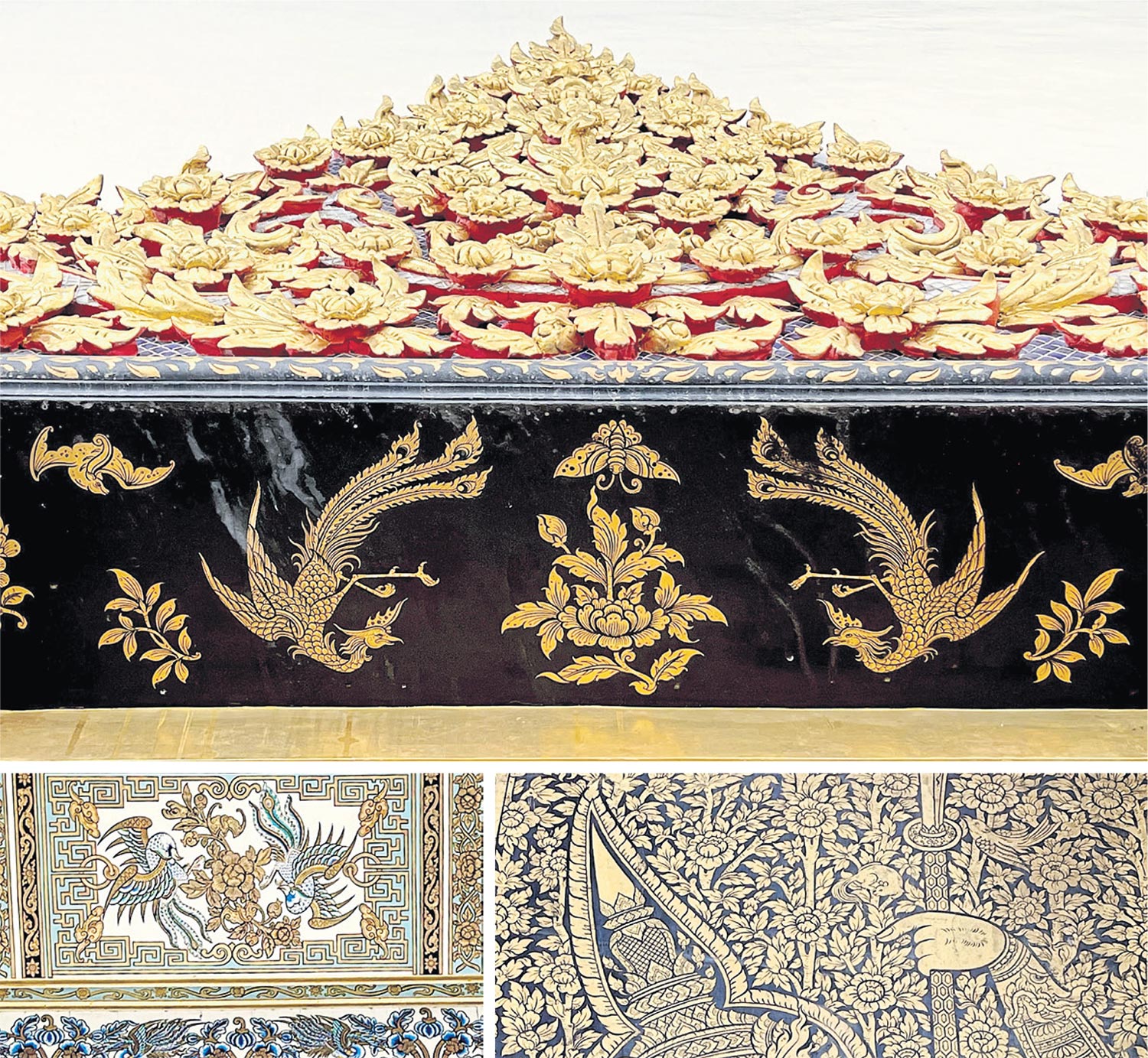 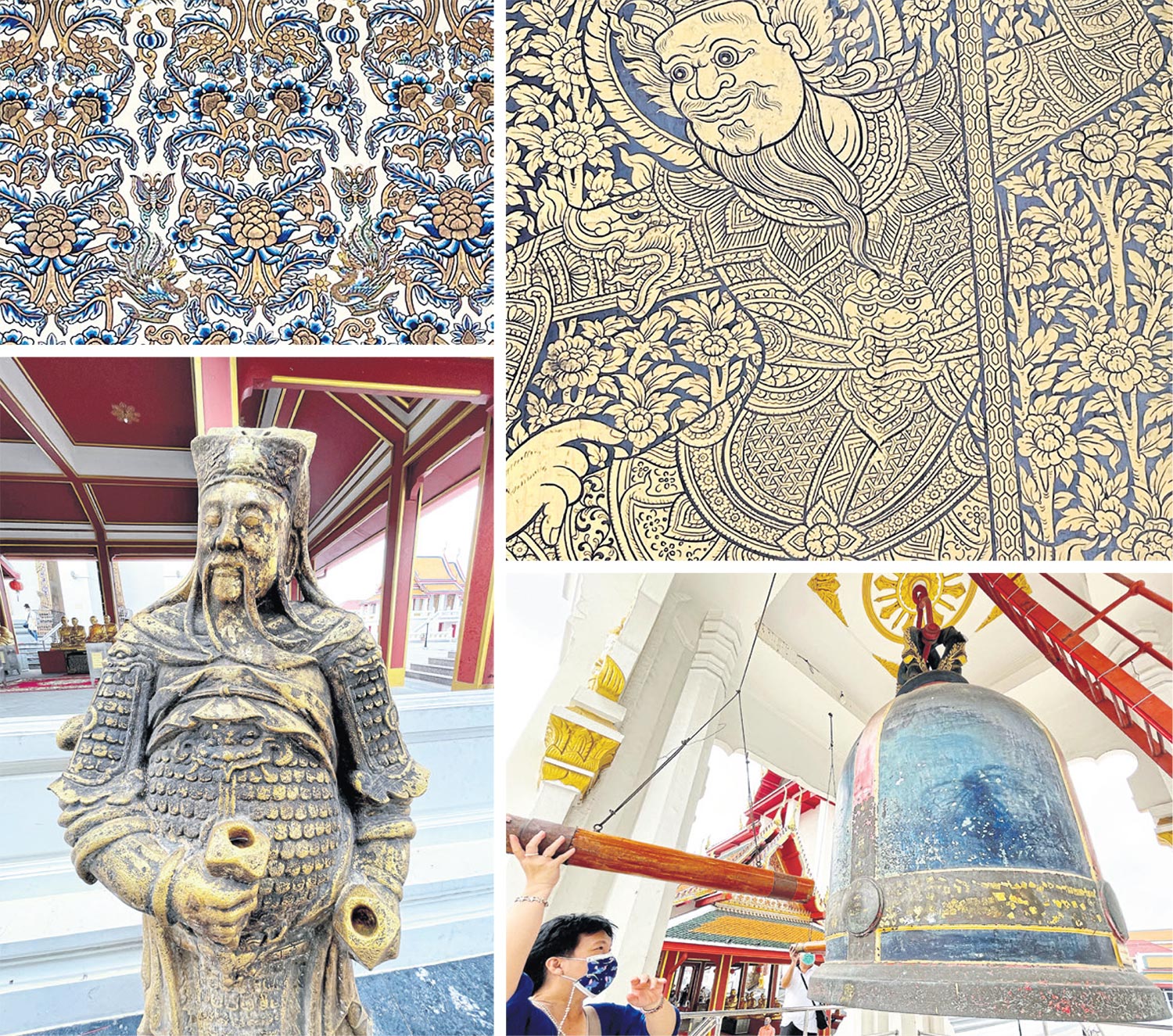 When you are in Wat Kanlayanamit, you may notice traditional art depicted on the door of the prayer hall as well as on the ceiling and door of another prayer hall located next to a bell tower. Do not forget to hit the bronze bell. It is regarded as the largest temple bell in Thailand. Built between 1933-1935, the bell’s size is 192cm in diameter and its weight is 13 tonnes.

Wat San Chao is also a respected temple in Pathum Thani. People visit the temple to worship not only seated and recycling Buddha images in its prayer hall but also a statue of an old man named Sian Pae Rong Si or Sian Pae Kim Koei.

Based on folklore, Sian Pae was an old rich Chinese merchant who built his wealth with his two hands. He also liked helping people as well as making merit to the temple so after he died, he was regarded as a saint. His followers built his statue and shrine in the temple ground.

"We believe that paying respect to Sian Pae will bring you success in business and wealth," said our guide.

By the time we returned to our boat, it was about 2pm. Our guide told us that we might not be able to complete our programme on time. We still had two more temples to visit before the last stop in Wat Pho in Bangkok.

Our next stop was Wat Bang Chak in Nonthaburi. This temple was built in 1822 by the Mon ethnic group residing in Koh Kret. From the river, you can see the large seated Buddha image with two naga sculptures at the front.

"Luang Pho To of Wat Bang Chak is the biggest Buddha statue in Nonthaburi," said our guide Krit.

He led us to the ordination hall but instead of going inside, he told us to walk around the hall for three rounds.

"When temple abbot renovated the old ubosot by lifting the hall to prevent flooding, they found two seated Buddha images. So, the abbot kept an underground path open for worshippers to walk under the hall," he said.

Locals believe that the act of praying while walking under the hall three times is auspicious. I followed the group to walk around and under the ubosot. I have to admit that the underground path had a foul smell.

Our last stop was Wat Daeng Thammachat in Nonthaburi's Muang district. It is an old temple built in the Ayutthaya period. The iconic figure of the temple is the seated Buddha image sitting on a naga with seven heads.

Our guide checked the time. It was almost 5 o'clock so he decided to call it a day.

"We can't reach Wat Pho in time because the ubosot will be closed before we get there," he said. No one opposed him.

For me, it did not matter how many temples we had visited or how big the Buddha images were. I just liked the cruising programme along the river. A chance to make merit was a plus.

"Merit-making always makes us feel a sense of contentment. It is also a good start for the traditional Thai new year," said the guide. 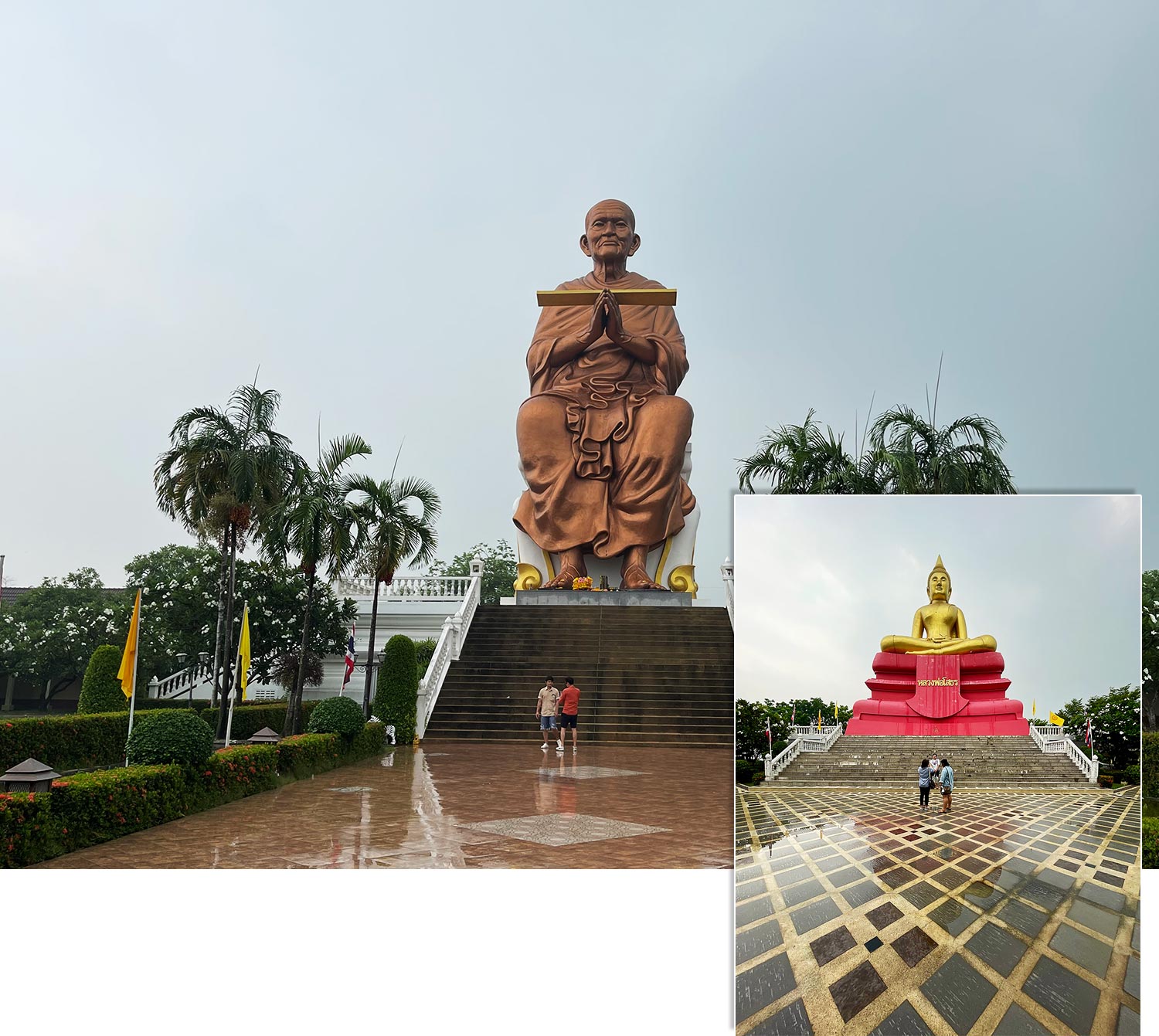 Wat Bot is known for two giant Buddha statues. One is a duplicate version of Luang Pho Sothon, a sacred Buddha image in Chachoengsao province. The seated Buddha statue is 37m tall. The other is Somdet Phra Achan To, who was a highly revered monk during the early Rattanakosin era. His statue is 28m tall. The temple also houses a small museum and a market where you can have lunch, some snacks and fruits. 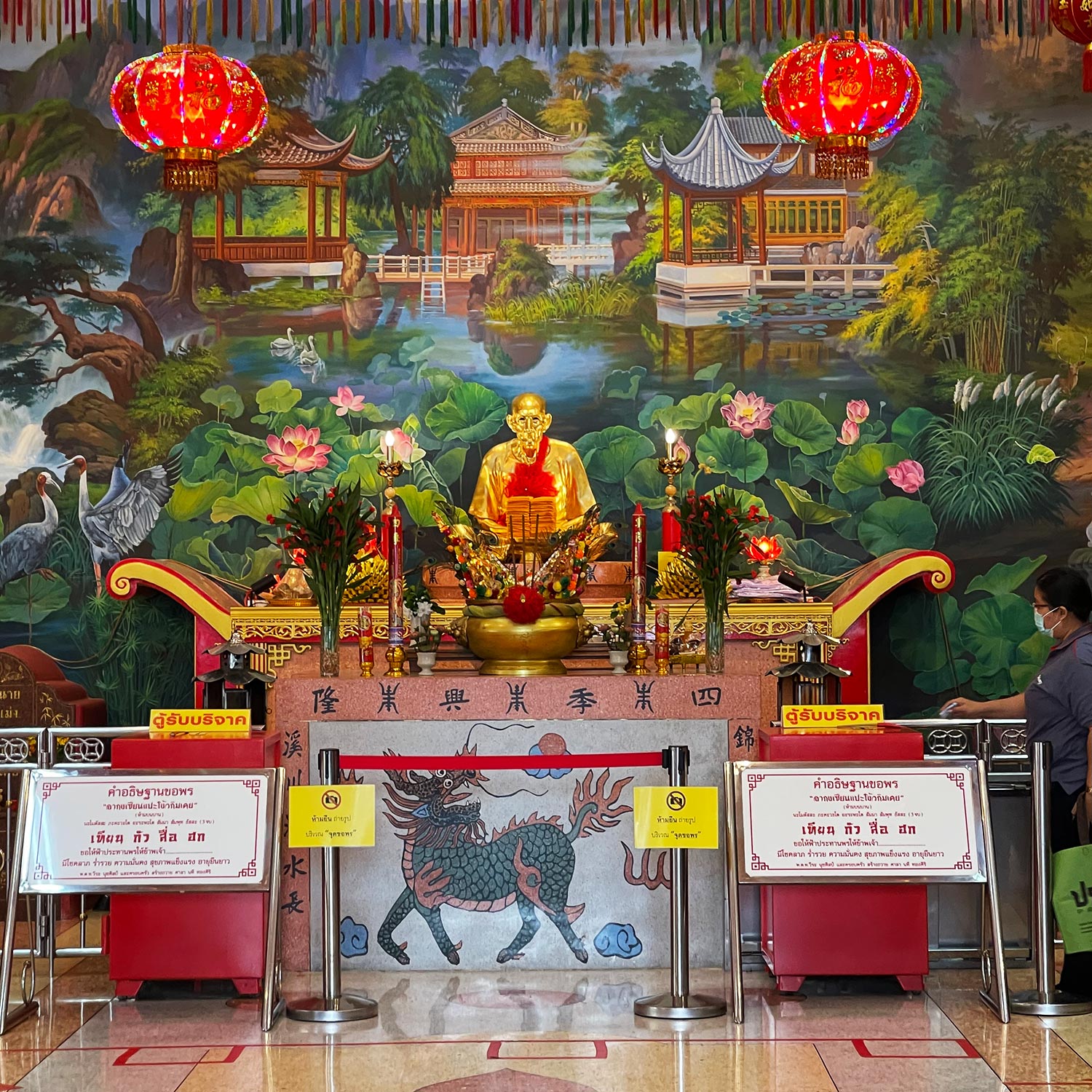 The life-sized sculpture of Sian Pae Rong Si inside his Chinese shrine in Wat San Chao. Those who offer donations will get a small pocket-size picture and a piece of mantra fabric believed to bring good luck in business. Wat San Chao also has a riverside market offering food and goods. 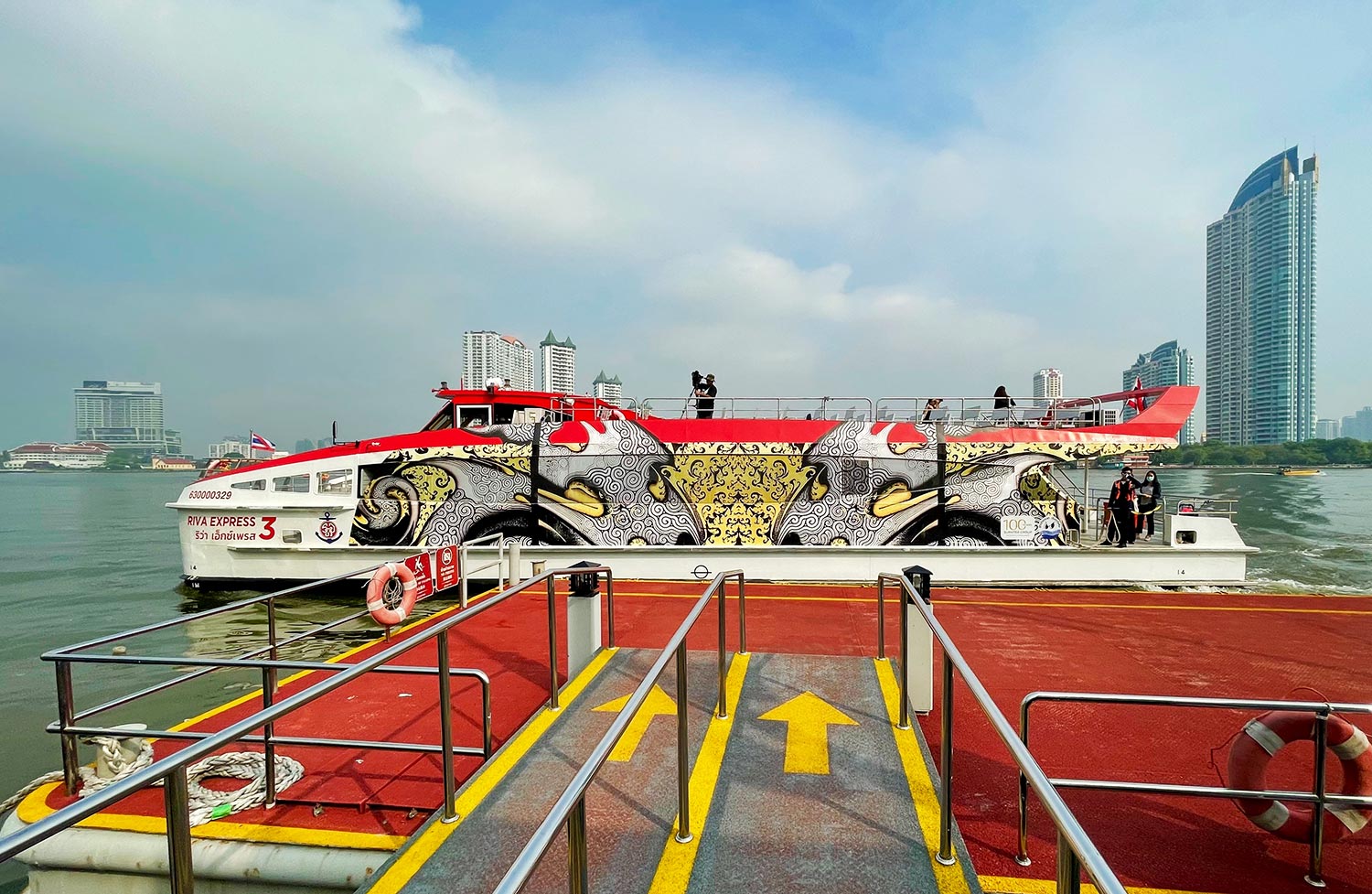 The Chao Phraya Express Boat is a double-decker that can accommodate 140 passengers. The company had planned another temple tour on April 18 but the programme is cancelled due to the new Covid-19 outbreak. Visit chaophrayaexpressboat.com for more details. 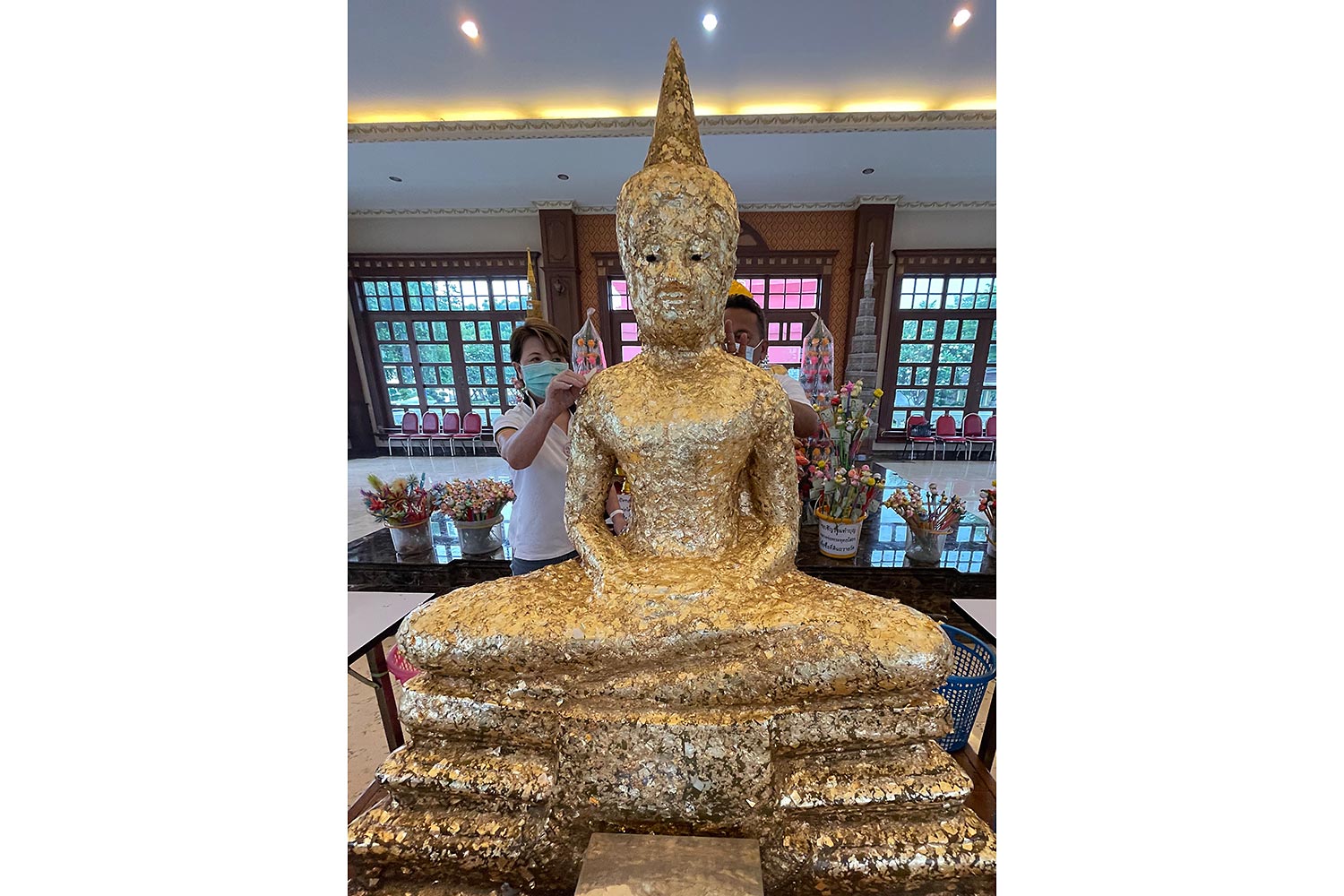 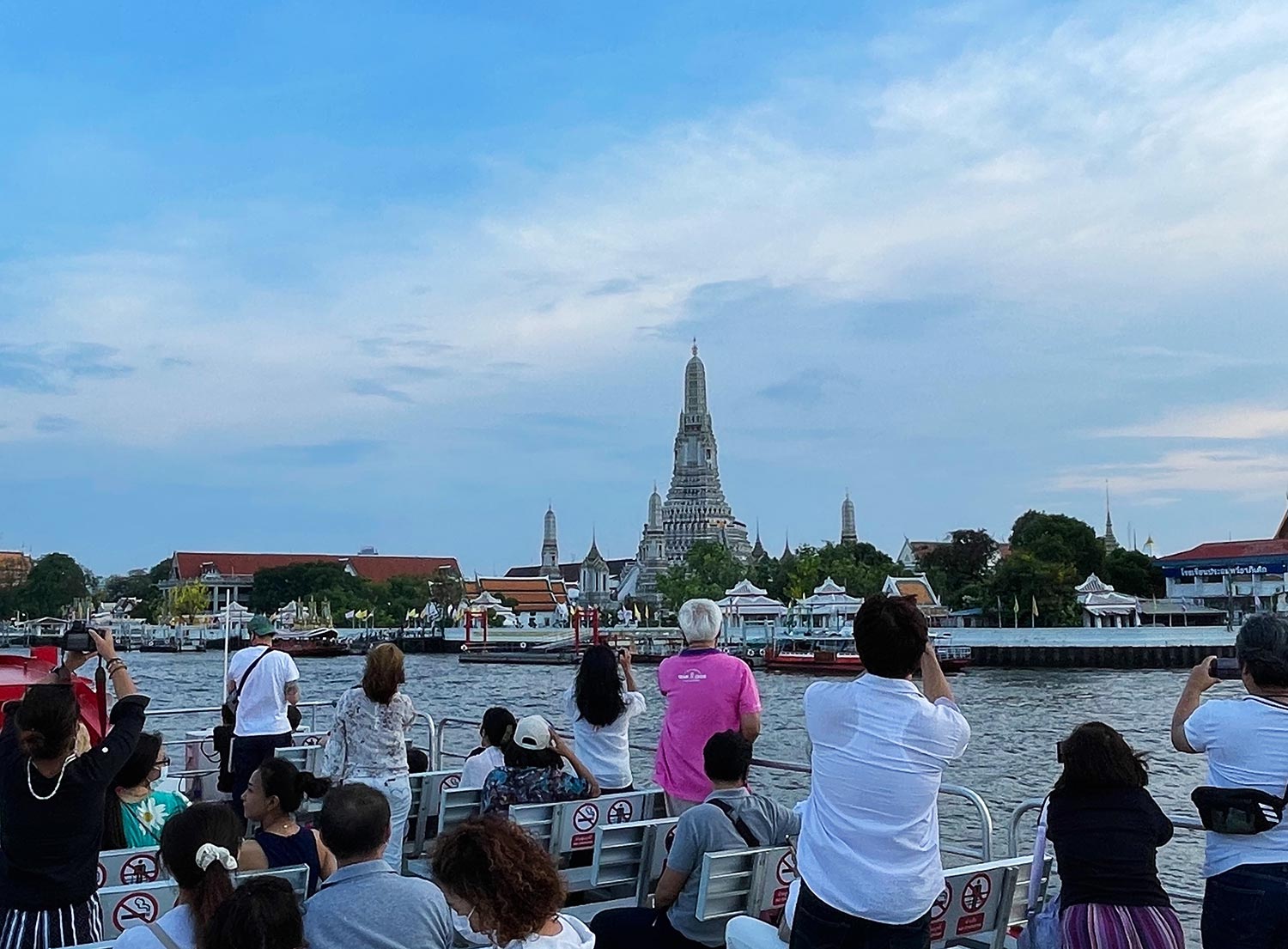 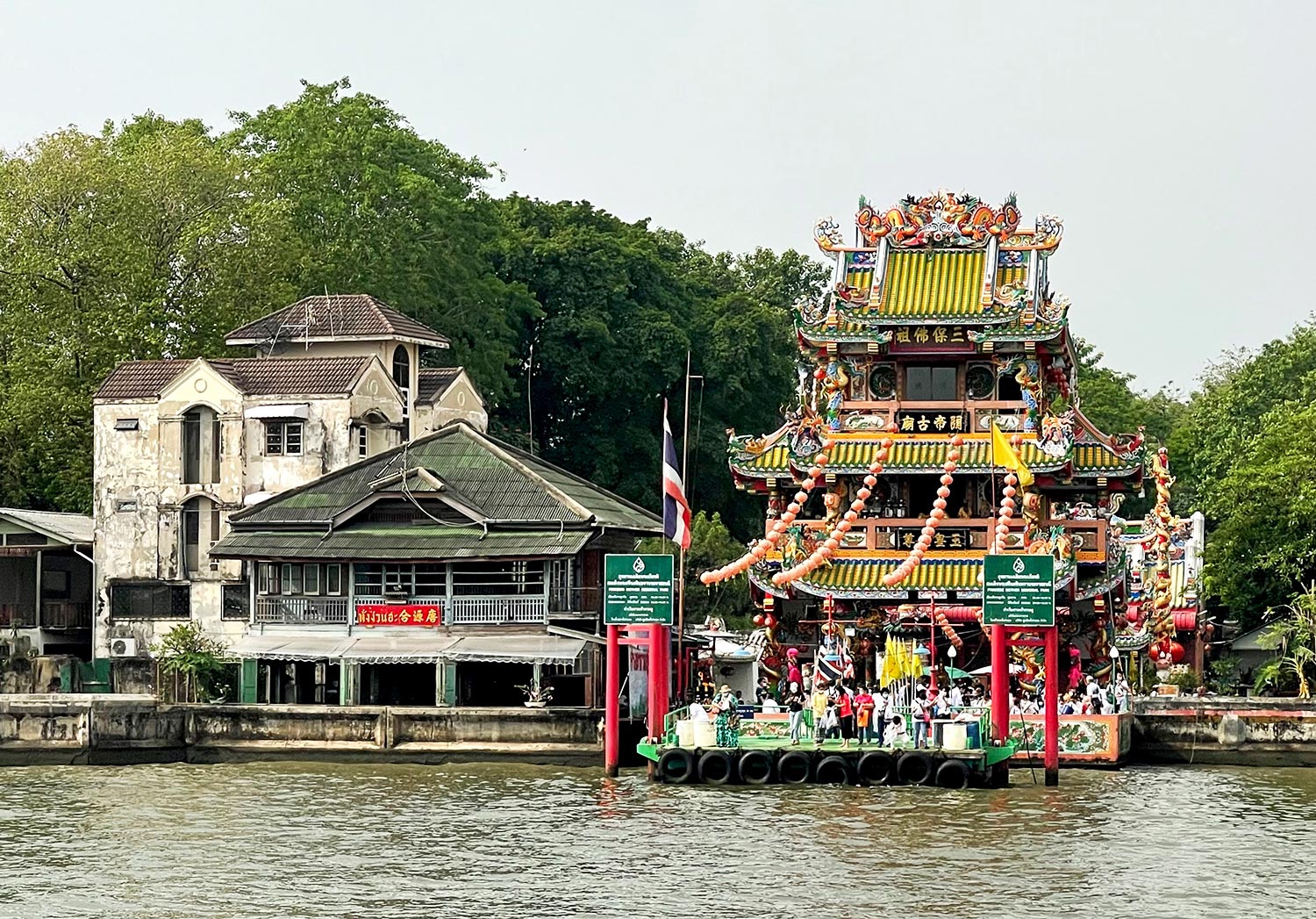 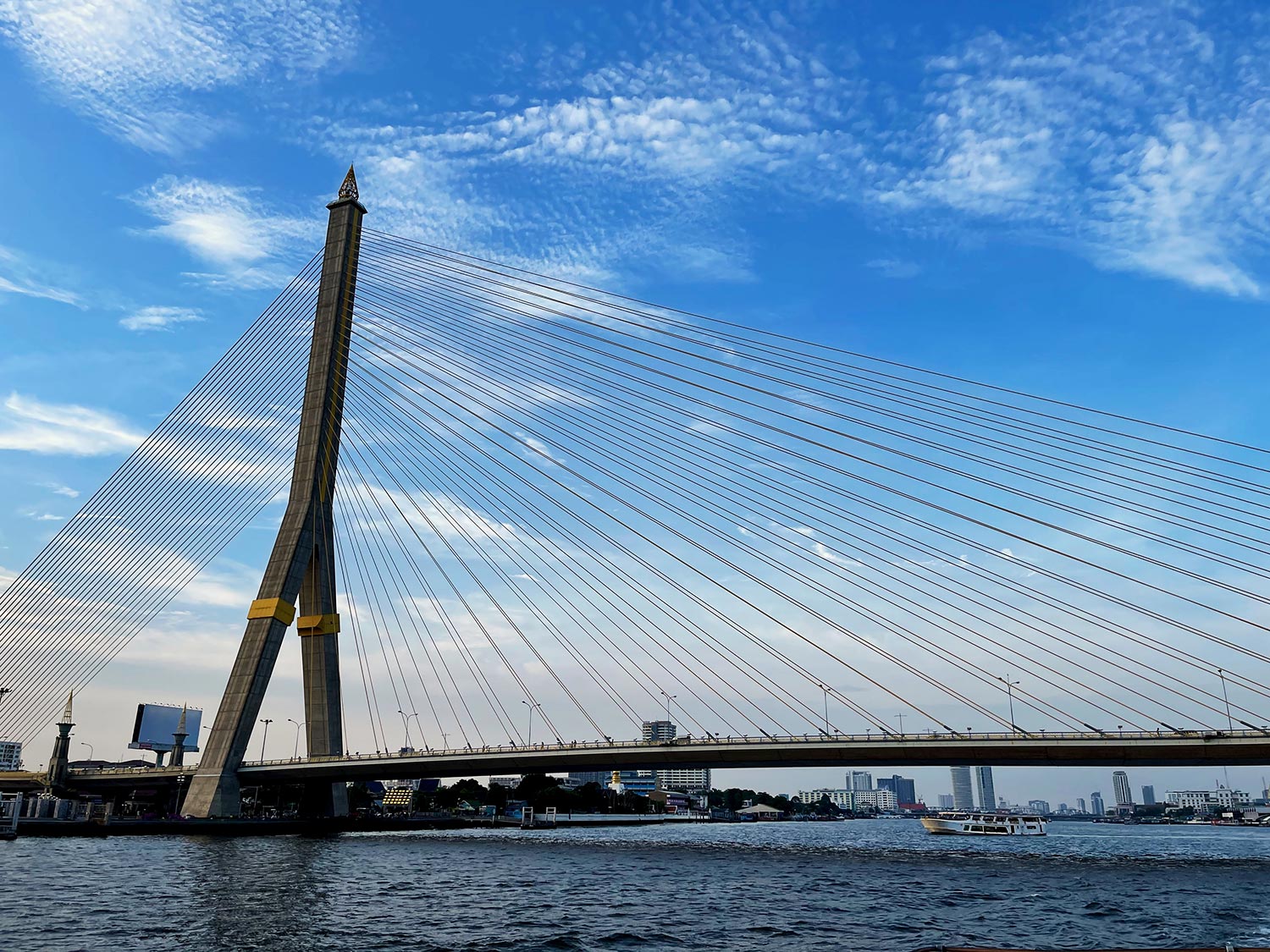 Cruising along the Chao Phraya River is a pleasant trip. You can spot beautiful attractions along the way including the Temple of Dawn, the Grand Palace, the Rama VIII Bridge, Guan Yu Shrine as well as the new Parliament House which looks like a grand temple due to its golden pagoda. 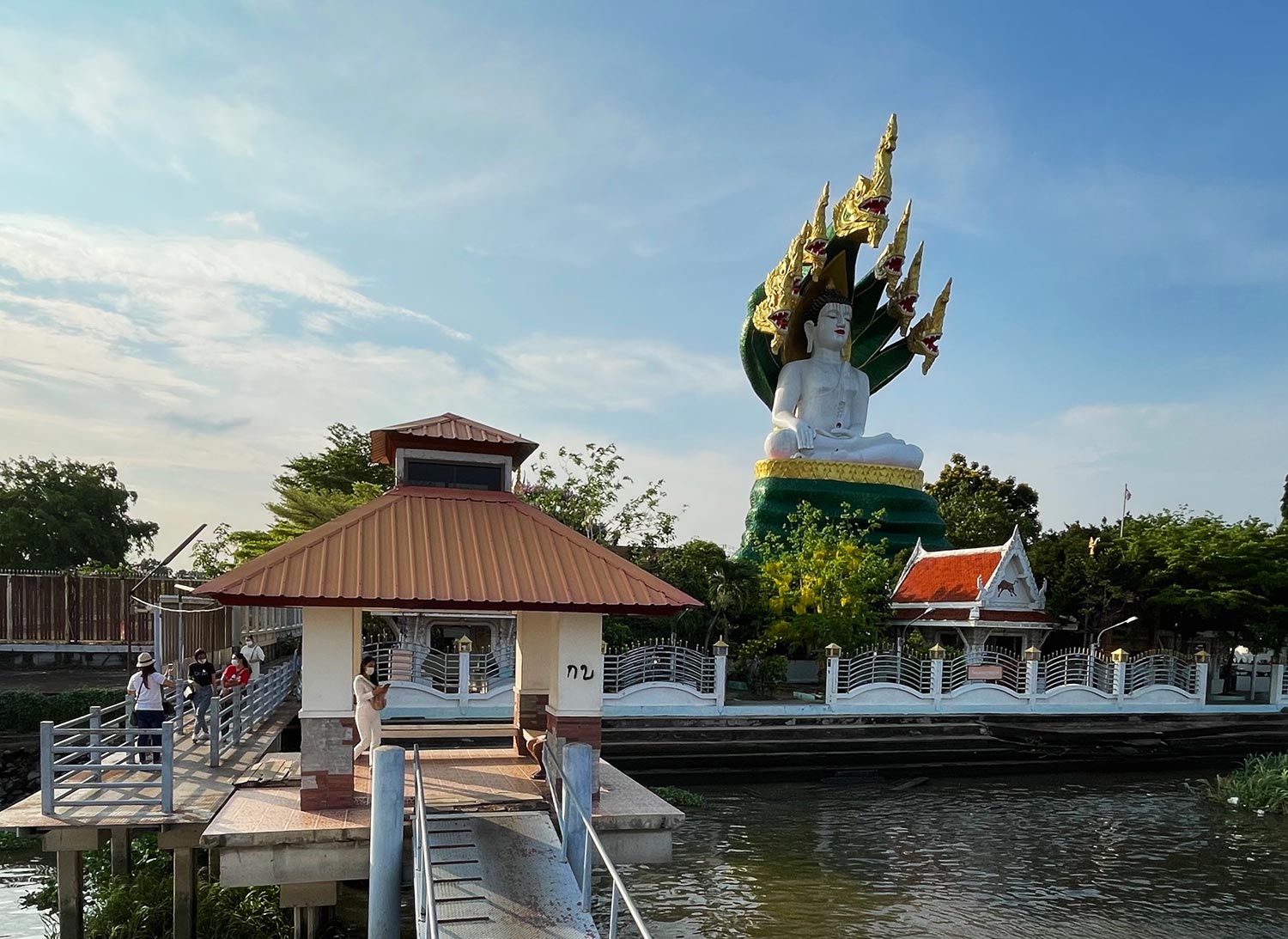 The seated Buddha image guarded by a seven-headed naga is built on the bank of the Chao Phraya River and in the compound of Wat Daeng Thammachat. From the base to the tip of the naga head, the height is 45m. 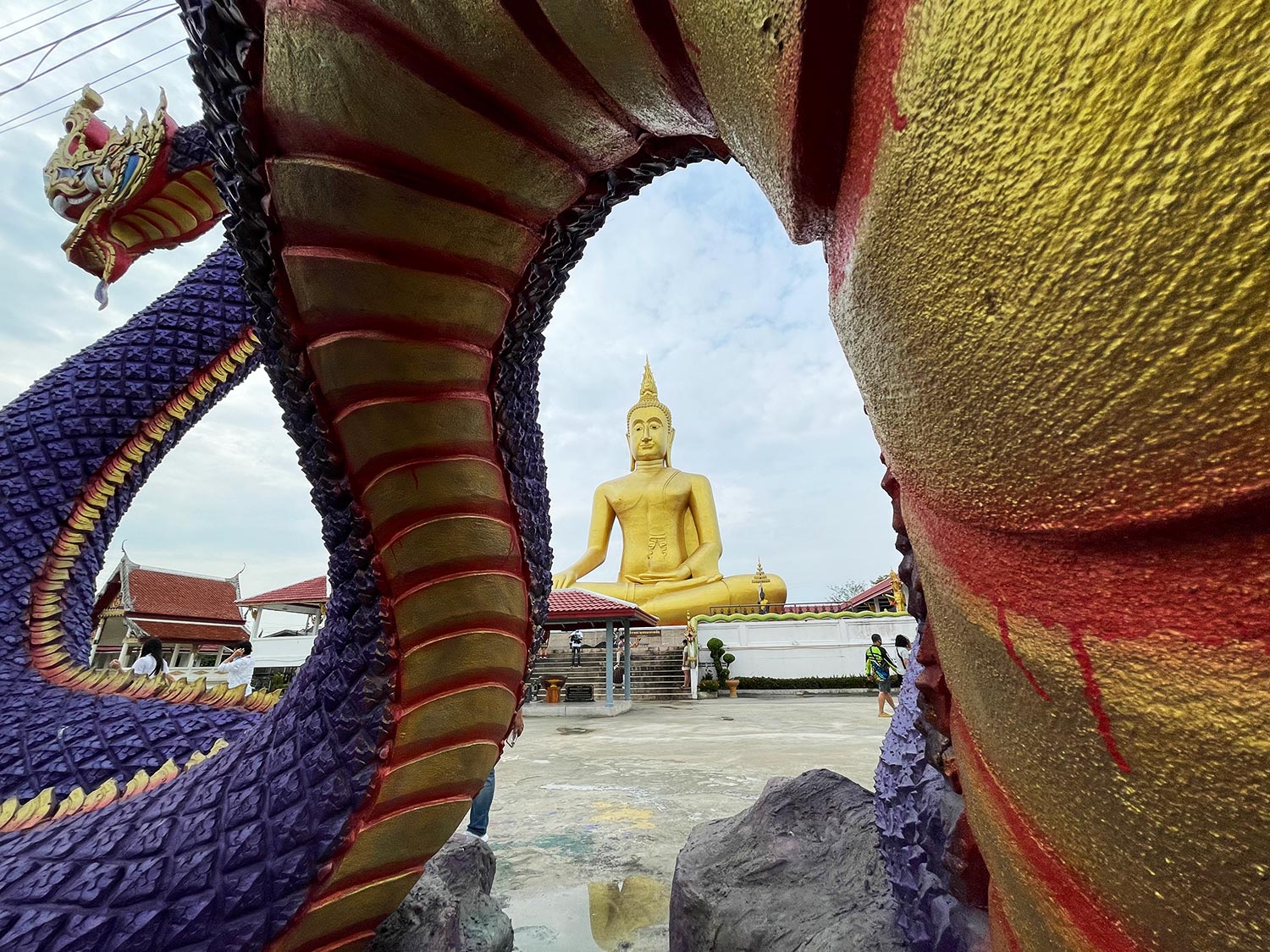 The 19m seated Buddha image is built facing the Chao Phraya River on the grounds of Wat Bang Chak. In front of the sculpture are two mythical serpents. One is painted in green and the other is purple. Locals believe that the holy well inside the temple is related to the palace of naga residing in the area. 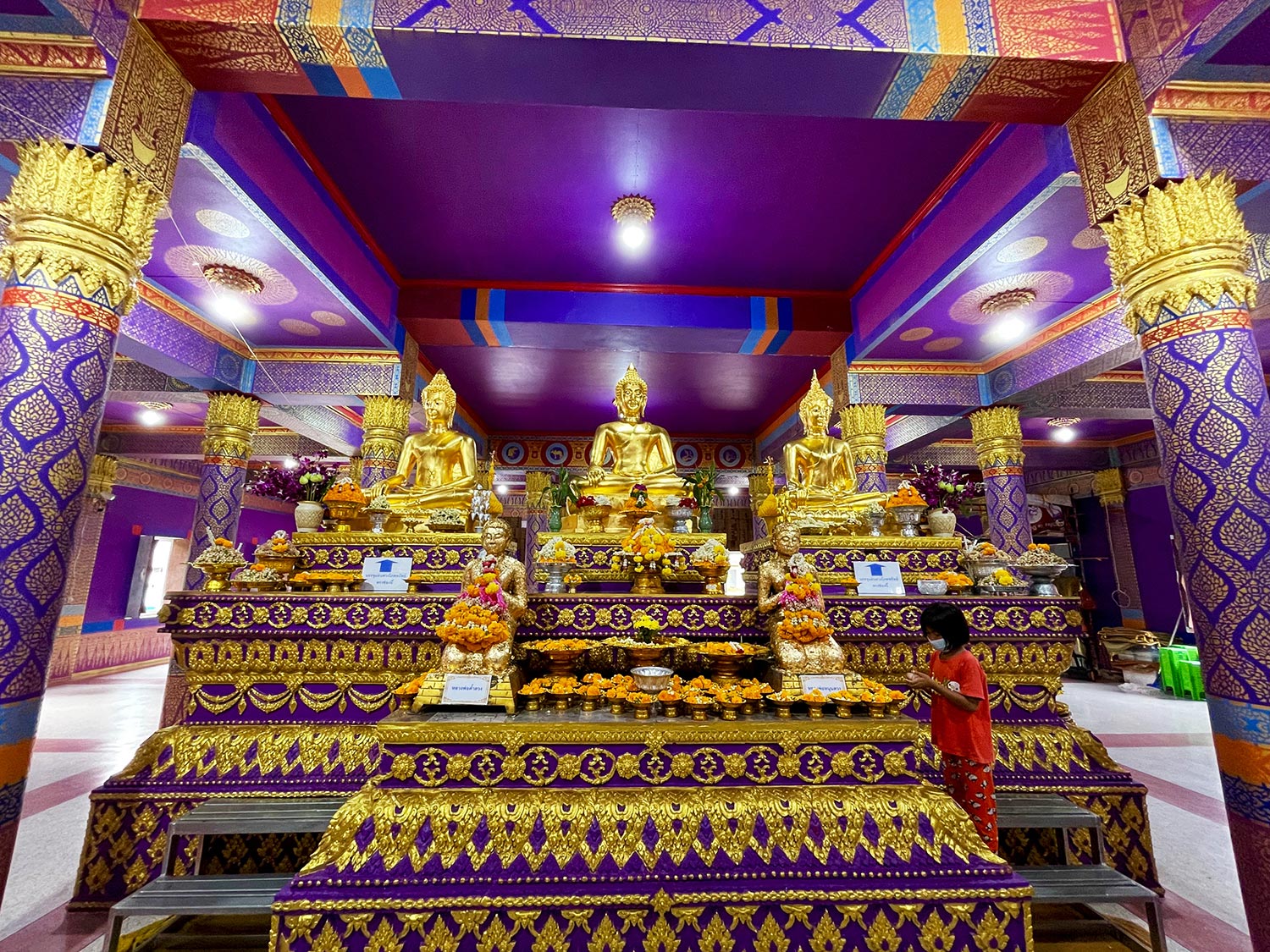 The ubosot at Wat Bang Chak is vivid with bright purple colour. It houses Buddha images including two sculptures beneath the hall (the sculptures on the front row). 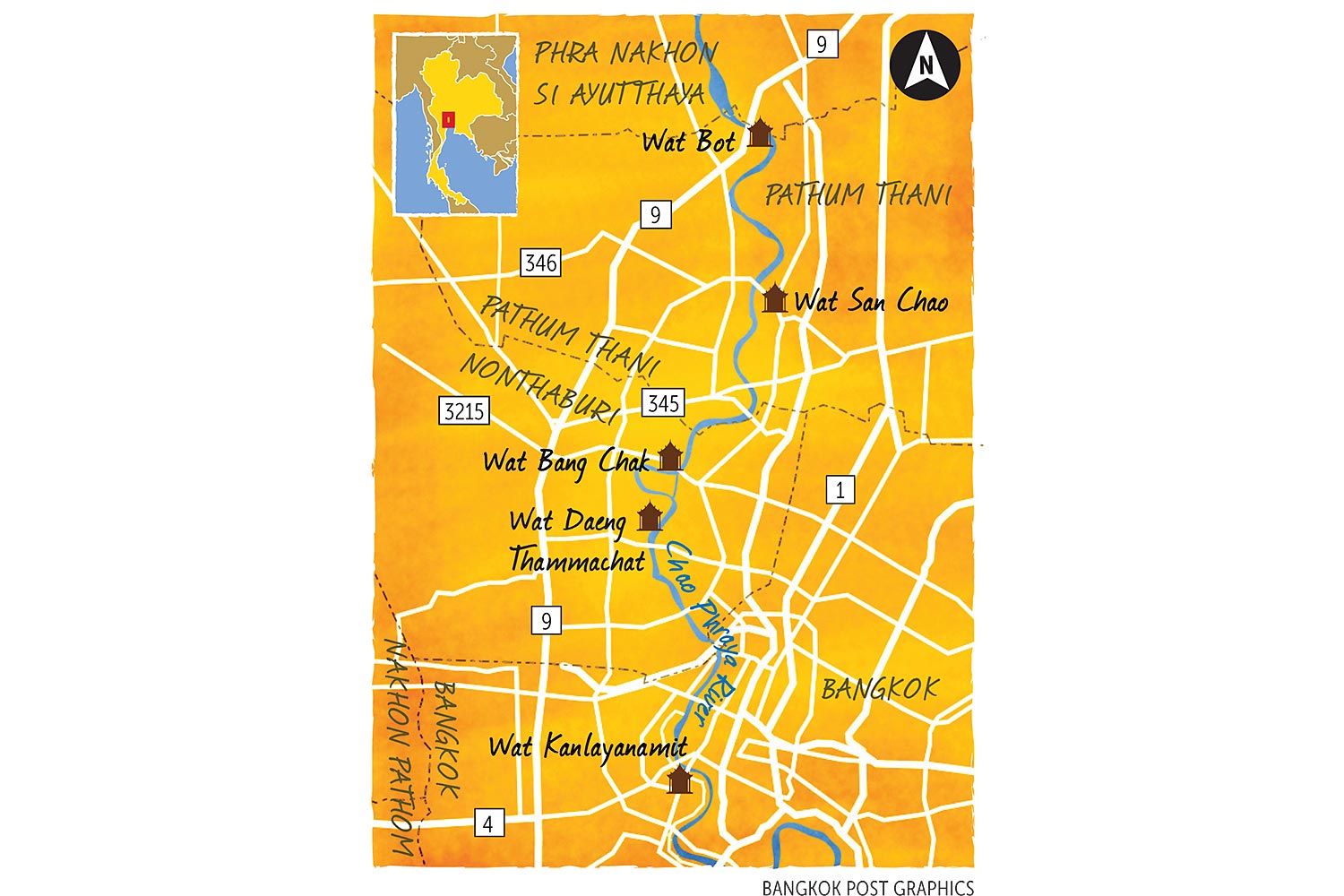