Heritage along the tracks
Travel

Heritage along the tracks

In this first edition of our hop-on, hop-off series, Life explores cultural travel destinations along the BTS Green Line

Thanks to extensions of the rapid transit system, getting around Bangkok has become easier and more convenient than ever before. 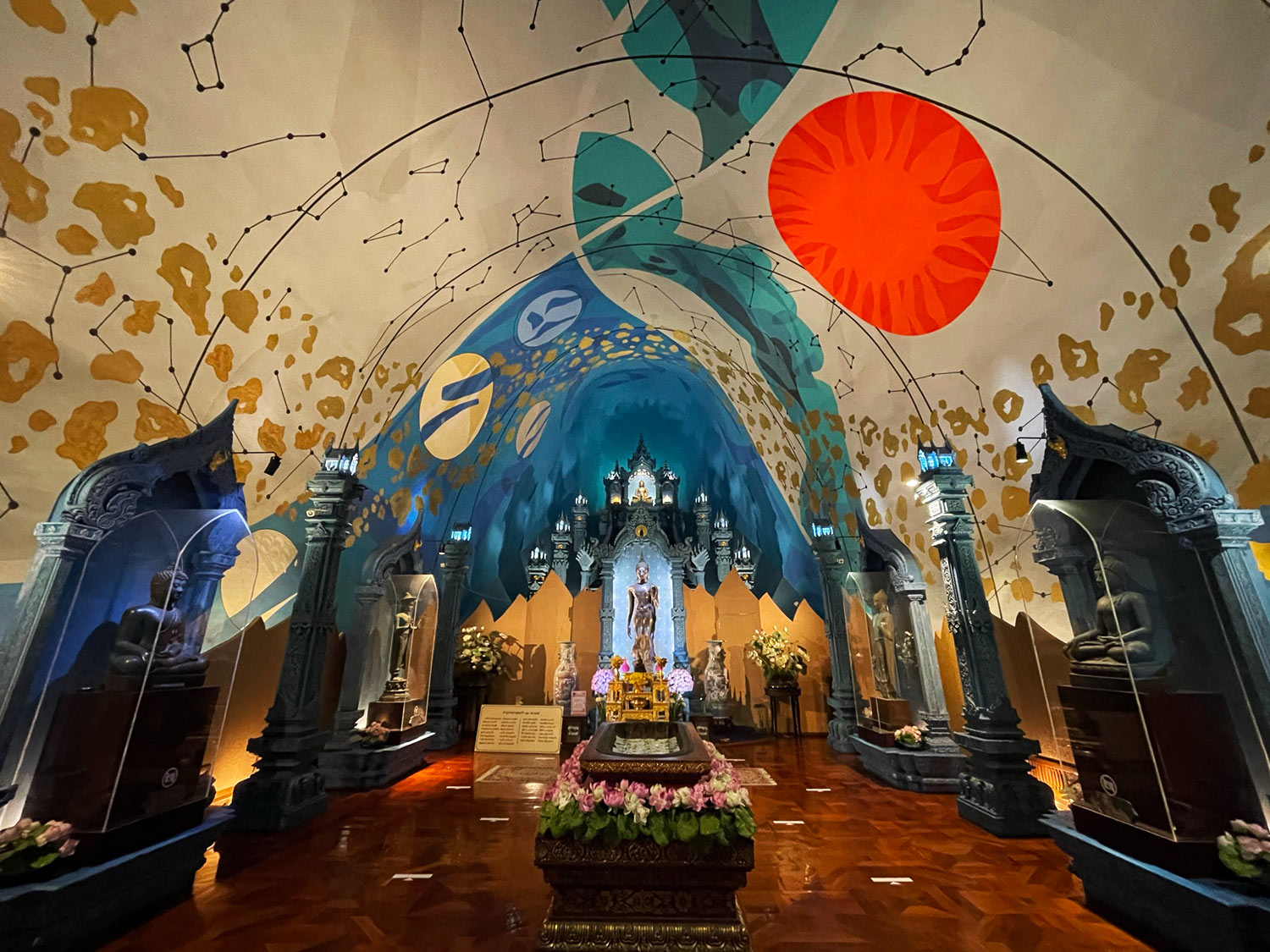 The 3rd floor of Erawan Museum is designed to resemble Mount Meru. 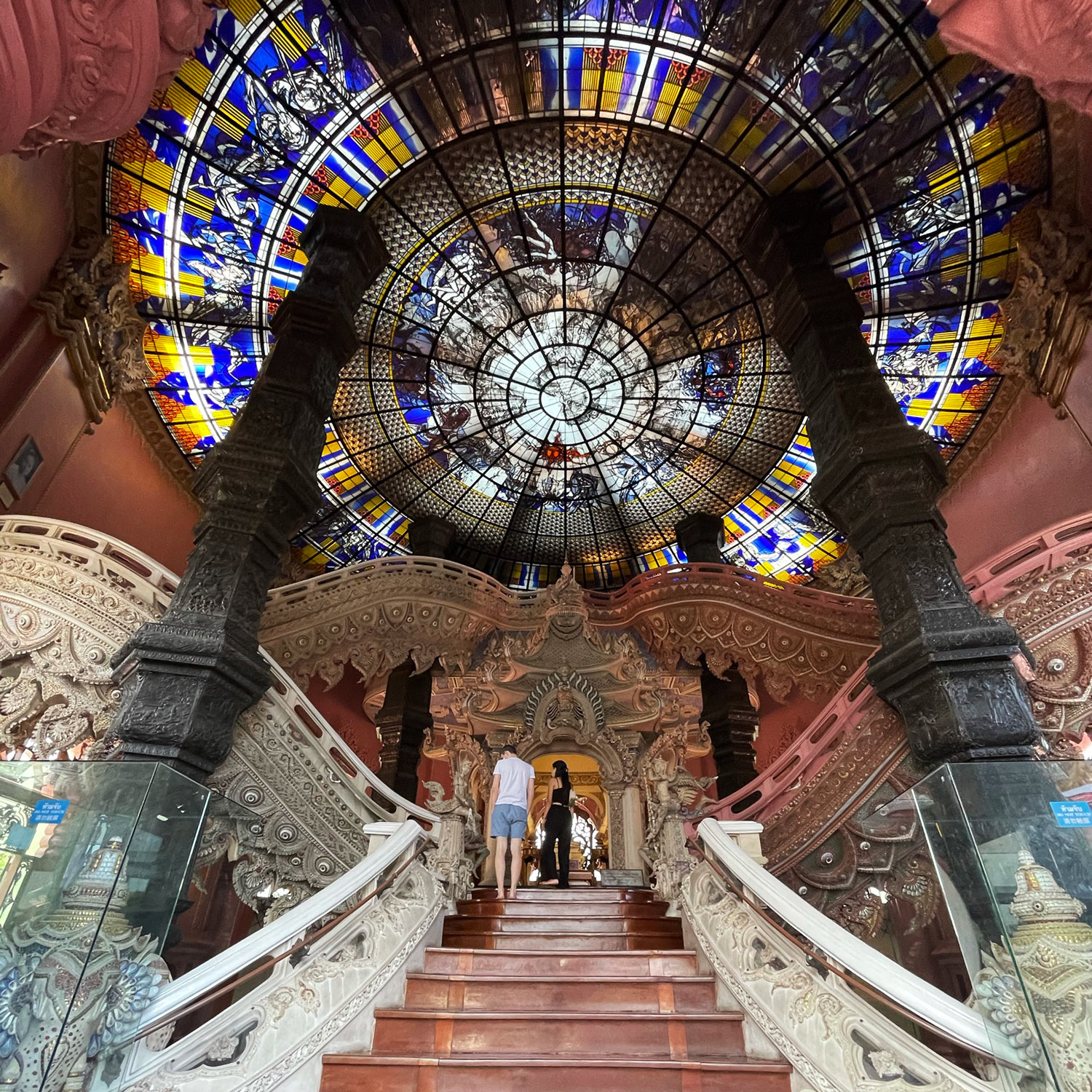 The spiral nagalike staircases link Earth and heaven and are based on Buddhist belief.

The capital is currently connected with Pathum Thani, Nonthaburi and Samut Prakan to relieve traffic congestion and air pollution after several new elevated railway routes were added to the map.

To take advantage of the growing mass transit network, Life has come up with a series of day programmes you can follow to explore interesting attractions along the Skytrain and MRT routes. This series will run at the end of each month.

With the BTS Green Line extension connecting On Nut to Kheha, Samut Prakan has become a popular holiday escape, especially since it is home to the Bang Pu Recreation Center, historical sites and museums that reflect life in waterside communities on the banks of the Gulf of Thailand and Chao Phraya River.

My sightseeing tour began with a 10-minute walk from the BTS Chang Erawan station to the Erawan Museum, which was once crowded with thousands of foreign tourists from China, South Korea, Russia and Europe, while Thai pilgrims came to pray for fortune, health and prosperity.

With the aim to educate people about Thai cultural heritage and promote craftsmanship, it took 10 years to construct the vibrant pink-coloured three-storey building and gigantic 250 tonne sculpture of a three-headed elephant installed on the roof.

"Back in 1995, the owner wanted to build a museum in a striking design to attract young people but also relate to religious beliefs. Thais are familiar with the Erawan elephant, which serves as a vehicle for the god Indra. This towering elephant-like sculpture is covered with 300,000 copper plates because they reflect heat and the material is durable," guide Songyot Wongyart said. "After being exposed to the elements for several years, the sculpture's surface gradually changed to black and blue-green before it turns white in the next 100 years. Based on a Hindu belief, the Erawan elephant has white skin."

The museum is divided into three zones. The Suvarnabhumi Level showcases hundreds of rare artefacts, sculptures of deities and porcelain from the owner's private collection to take visitors back to the heyday of old Siam.

The highlights include a wide edition of prehistoric jewellery fashioned out of copper, tin and bronze, terracotta glass beads from the prehistoric to Dvaravati periods, ancient iron implements and Chakri porcelain from the reign of King Rama V. They were specially customised to be keepsakes in the royal funeral of Princess Saovabhak Nariratana and princes in 1887.

Also on view is a series of beautiful ceramics from the Sukhothai period. Influenced by Chinese style, they feature auspicious motifs of fruits, plants and mythical animals to bring luck.

"The ancient town of Sukhothai became a major kiln site after Chinese porcelain ware was in short supply. Initially, artisans crafted them to use in homes before it was developed to be exported in the early Ayutthaya period," Songyot added. 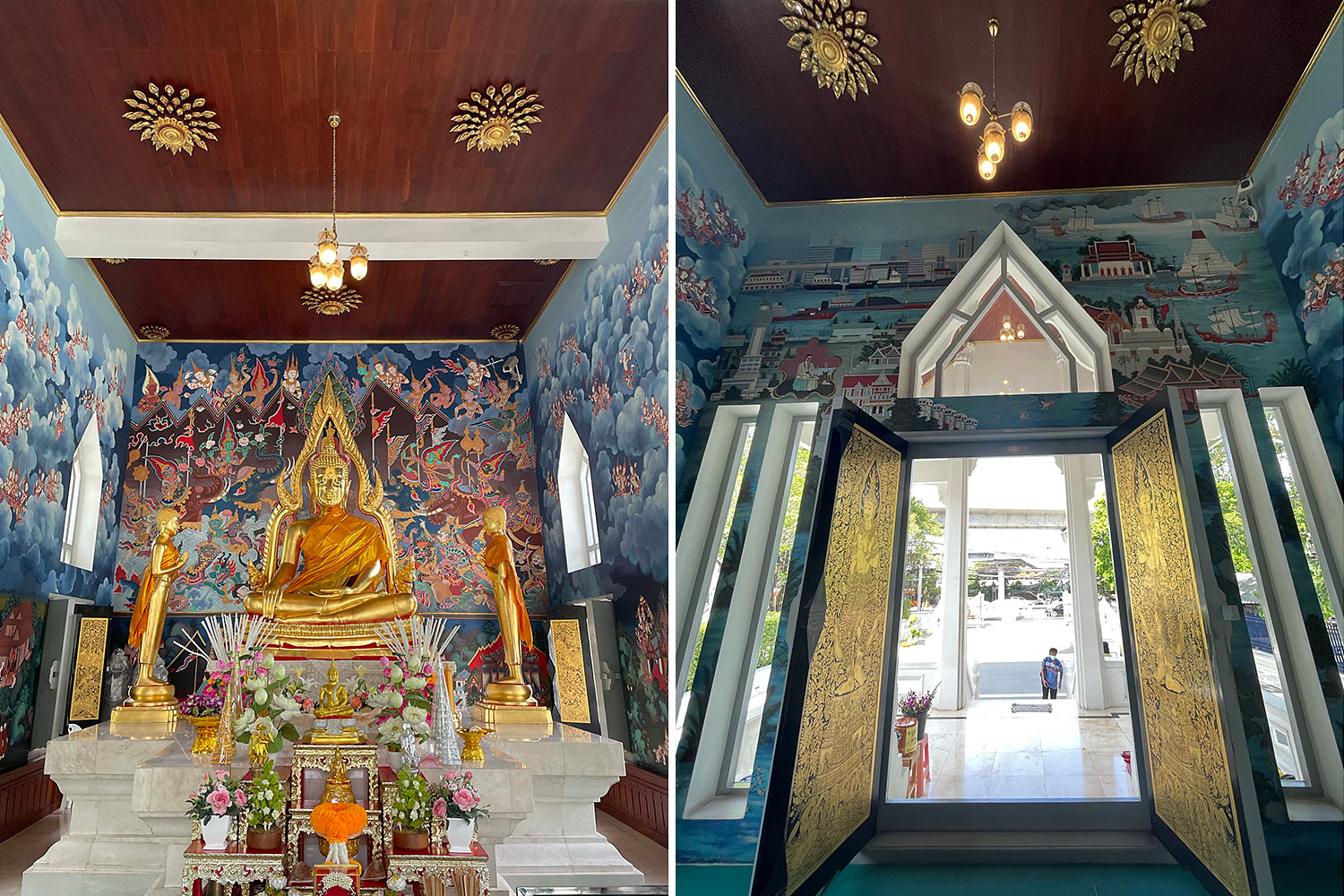 The vihara at Phra Buddha Chinnarat Mongkonprakan is the centrepiece of the local community in Samut Prakan. Thai contemporary murals at the vihara portray the lives of waterside communities.

The Human Earth Level is a combination of top-class Thai craftsmanship and Western contemporary architecture that illustrates the philosophy of life and religion. Designed by German artist Jacob Schwarzkopf, the multicoloured stained glass ceiling is shaped to resemble the planets and painted with zodiac signs and important stars while the white-and-pink spiral staircases are graced with more than 100,000 pieces of Benjarong porcelain and stucco, making it the popular photogenic backdrop for tourists.

It also boasts four colossal pillars with elaborate chasing and repousse work based on four religious beliefs to uplift your spirit. The Buddhism Pillar recounts the Lives of the 10 Bodhisattva before the reincarnation of Buddha in the Jataka tales, the Hinduism Pillar is devoted to the god Vishnu, the Mahayana Pillar is about the Mercy goddess and the Christian Pillar takes visitors back to the origin of humans and shows how Jesus Christ expressed his love to humanity.

Adhering to Buddhist cosmology, the Cosmos Level represents Mount Meru, where the king of gods Indra lived on a mountain peak and is enshrined with a row of age-old Buddha statues in different postures.

Coming back to Earth, visitors can continue their pilgrimage in the botanical garden, which is home to shrines of Phra Ket Chulamanee, Brahma, Vishnupong, Ganesh, Guanyin, Indra and Bhramapong.

Just a few stops down from BTS Chang Erawan is BTS Pak Nam and a 450m walk from this station brings you to the vihara of Phra Buddha Chinnarat Mongkonprakan, which is cherished by local residents. Inside, it is home to its namesake Buddha statue, which was built in 1963 and formerly enshrined in City Hall before moving to its new home.

Designed by independent scholar Sippavish Boonyapornpaviz, the blue walls are adorned with astonishing Thai contemporary murals depicting the Lord Buddha's life, King Bhumibol Adulyadej presiding over the opening ceremony of Khlong Lat Pho Floodgates, and scenes about how the district has served as a marine outpost. The Ancient City showcases a replica of Sanphet Throne Hall. 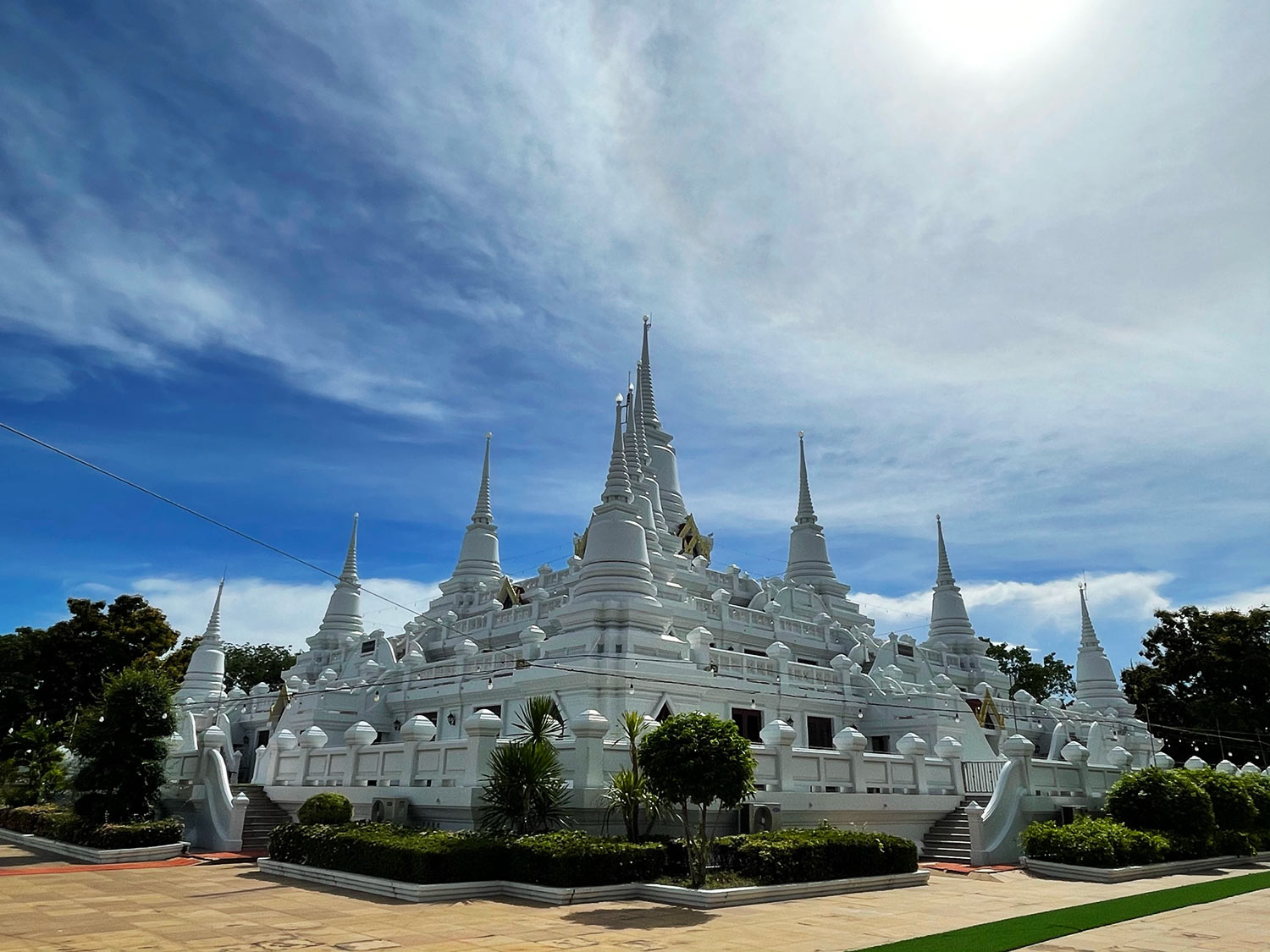 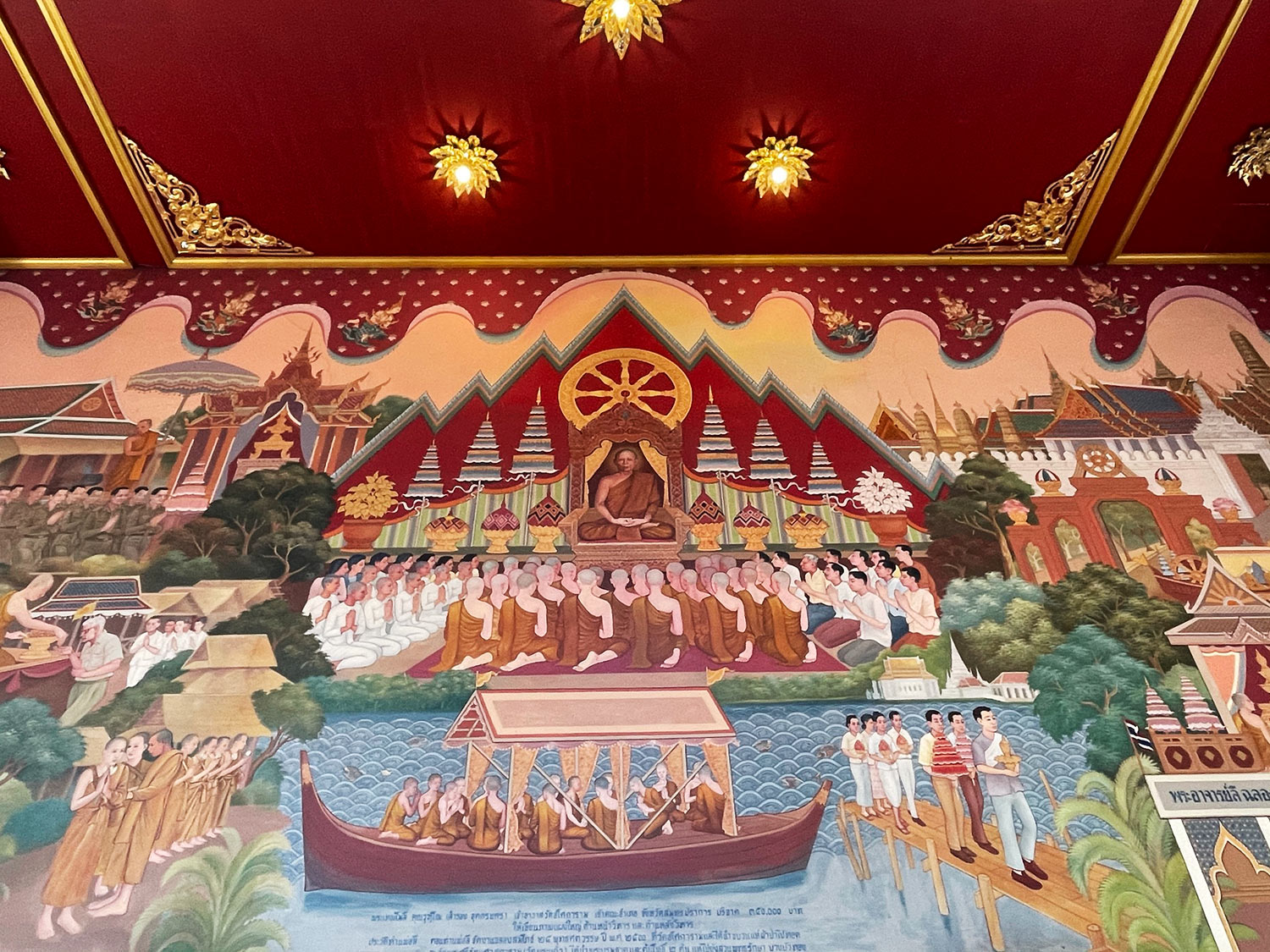 Colourful murals in Wisutthithamrangsi Vihara recount the history of the temple and community.

Long-lasting and easy to restore, Sippavish adopted modern techniques by using acrylic colours to paint on canvas before mixing them with traditional gold gilding.

Further down the Skytrain at BTS Kheha station, a five-minute drive brings you to the Ancient City where tourists can spend a day browsing significant historical attractions.

This 800 rai outdoor museum is laid out in the shape of Thailand and has now resumed operations to welcome visitors to four zones -- South, Central, Old Market Town and Recreation, following preventive measures to contain Covid-19.

At the entrance, Old Market Town is a good place to take a break and enjoy some traditional Thai snacks and beverages in a nostalgic ambience. The market is lined with barbers, old-fashioned boutiques, a traditional casino, a bawdy house as well as theatres for Nang Yai shadow play and Chinese opera to illustrate the unique lifestyle of the old days.

After a boost in energy, I boarded an eco-friendly electric tuk-tuk to the Great Hall of Vajra Dhamma, which bills itself as Lord Buddha's museum. Its design is a mixture of Buddhist principles and the beauty of Ayutthaya-style architecture and inside the luminous gold compound are the statues of 38 Buddhas from the past, present and future, according to the Buddhist canon.

The walls are adorned with millions of gilded low-relief sculptures of the Buddha and the floor is made from fragrant Hinoki wood imported from Laos while its roof features a five-spire prang, which represents a divine king and kingship under dhamma.

There's also a recreation of the venerable pagoda complex to represent 12 Buddhist zodiac years like India's Mahabodhi Temple for those born in the Year of the Small Snake and Thailand's Phra That Doi Tung for the Year of the Pig. Each replica is filled with soil from the original site and visitors can pay homage with flowers. 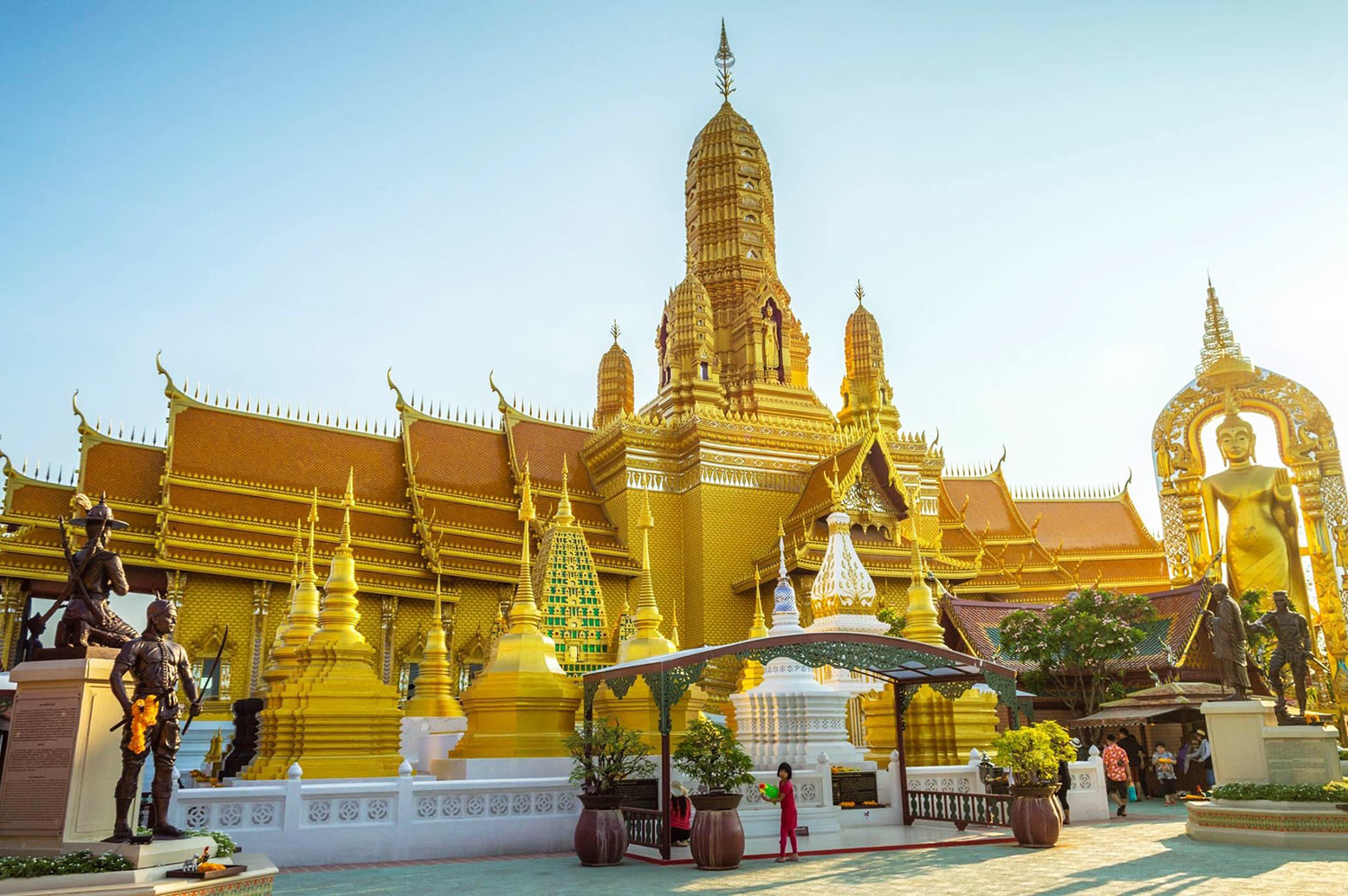 The walls of the Great Hall of Vajra Dhamma are graced with millions of gilded low-relief sculptures of the Buddha. (Photo courtesy of Ancient City) 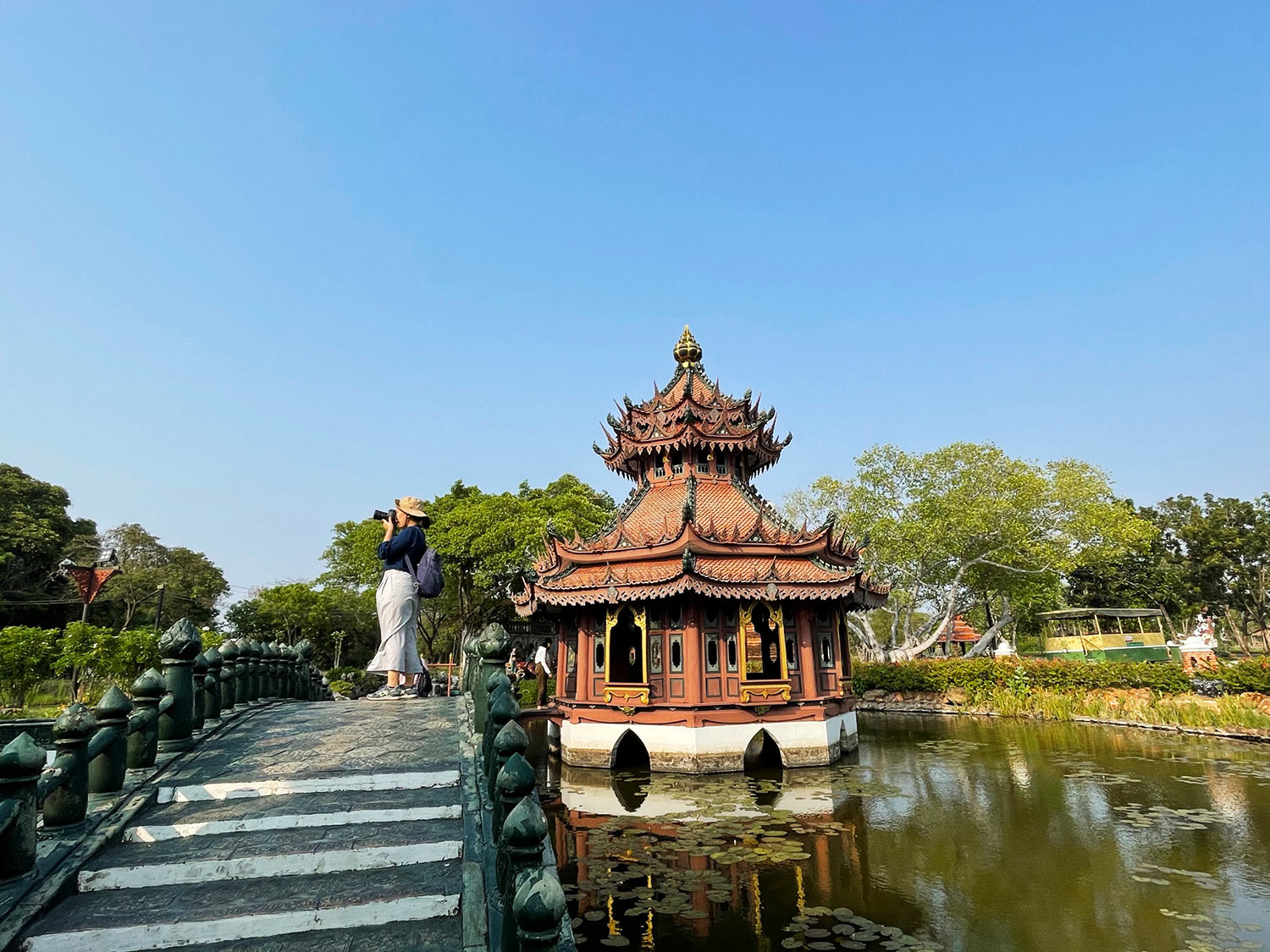 The octagonal-shaped Phra Kaew Pavilion is a mixture of Thai and Chinese designs.

Afterwards, I hopped to the Southern Region zone where Phra Maha That Chaiya is the highlight. Its structure is inspired by Chandi Pawana in Indonesia and decorated with refined stucco motifs. The main hall serves as a relic chamber and its pediments are engraved with Avalokitesvara in different postures.

Next door is the Central Region zone, home to a replica of Sanphet Throne Hall, which was erected during the reign of King Phra Baromtrai Lokanat to serve as a ceremonial site for coronations and other important events. Inside, it boasts a private collection of old porcelain and silver and gold nielloware as well as spectacular murals of the Hindu god Narayana.

Opposite, the octagonal-shaped Phra Kaew Pavilion is surrounded by a huge pond and showcases a perfect mixture of Thai and Chinese designs. Inside, it houses a beautifully carved scripture cabinet from the Ayutthaya period.

A short walk from the Chinese wood pavilion, the imitation Mondop of the Footprint of the Lord Buddha in Saraburi stands on a hilltop to boast beautiful Ayutthaya-style architecture. At night, the Central Region zone is illuminated for the "Muang Boran Light Fest", which will run until this Sunday.

Situated just 1km from the Ancient City is the Thamma Katanyu Foundation Shrine (Sian Lo Tai Thain Kong Temple), which is a place for those born in the Year of the Ox, Goat, Big Snake and Dog to gather in front of Tai Sui and ask for protection.

Influenced by Nan Kun Shen Dai Tian Temple in Taiwan, this 26 rai tranquil compound was constructed in 1991 to install statues of five Taiwanese gods and warlords from the families of Li, Chue, U Chu and Fan, known as U Fu Sian Suai.

Based on Chinese beliefs, its roof is adorned with colourful figures of auspicious animals like lions and dragons and captures some scenes from Chinese folklore. At the entrance, a pair of lion-like sculptures crafted from imported Chinese green jade serve as guardians to protect the shrine from evil. Inside, the temple features the sacred shrines of Chinese deities such as Mercy Goddess, City God, Pek Kong and Zhong Kui.

The last stop is Wat Asokaram, famous for its practice of meditation. Built by former abbot Phra Achan Lee Thammawaro, the temple houses an extensive complex of 13 white pagodas called Phra Thutangkha Chedi, whose design represents the 13 duties of monks during pilgrimage.

The pagoda complex looks like a museum that gathers statues of renowned monks and their ashes such as Luangta Maha Bua Yannasampanno, Luang Pu Fan Ajaro and Luang Pu Man Bhrudatto under one roof.

Another highlight is Wisutthithamrangsi Vihara where visitors are allowed to pay homage to the remains of Phra Achan Lee and learn about his life and the temple's history through colourful murals. 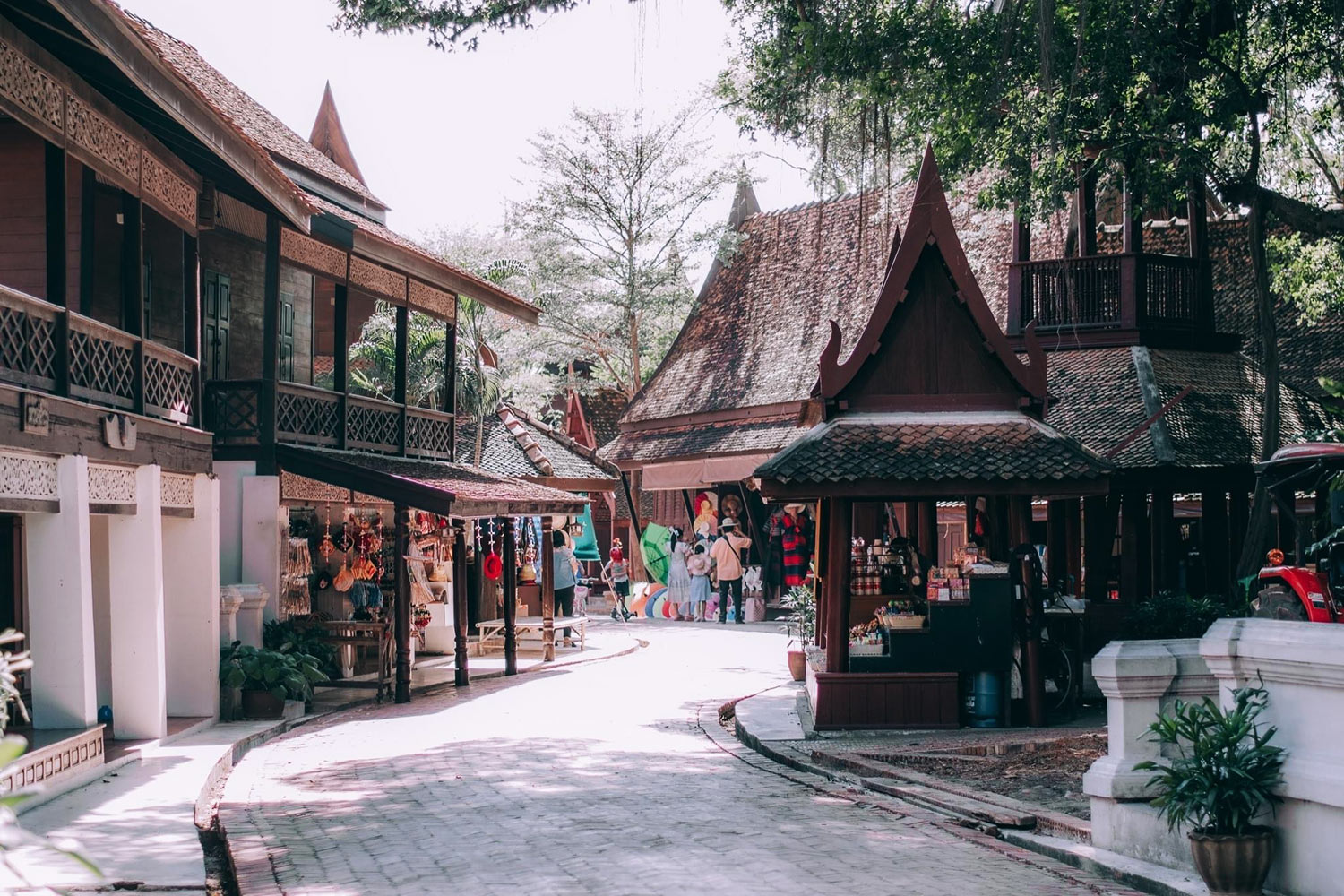 The Old Market Town is designed to be a living museum. (Photo courtesy of Ancient City) 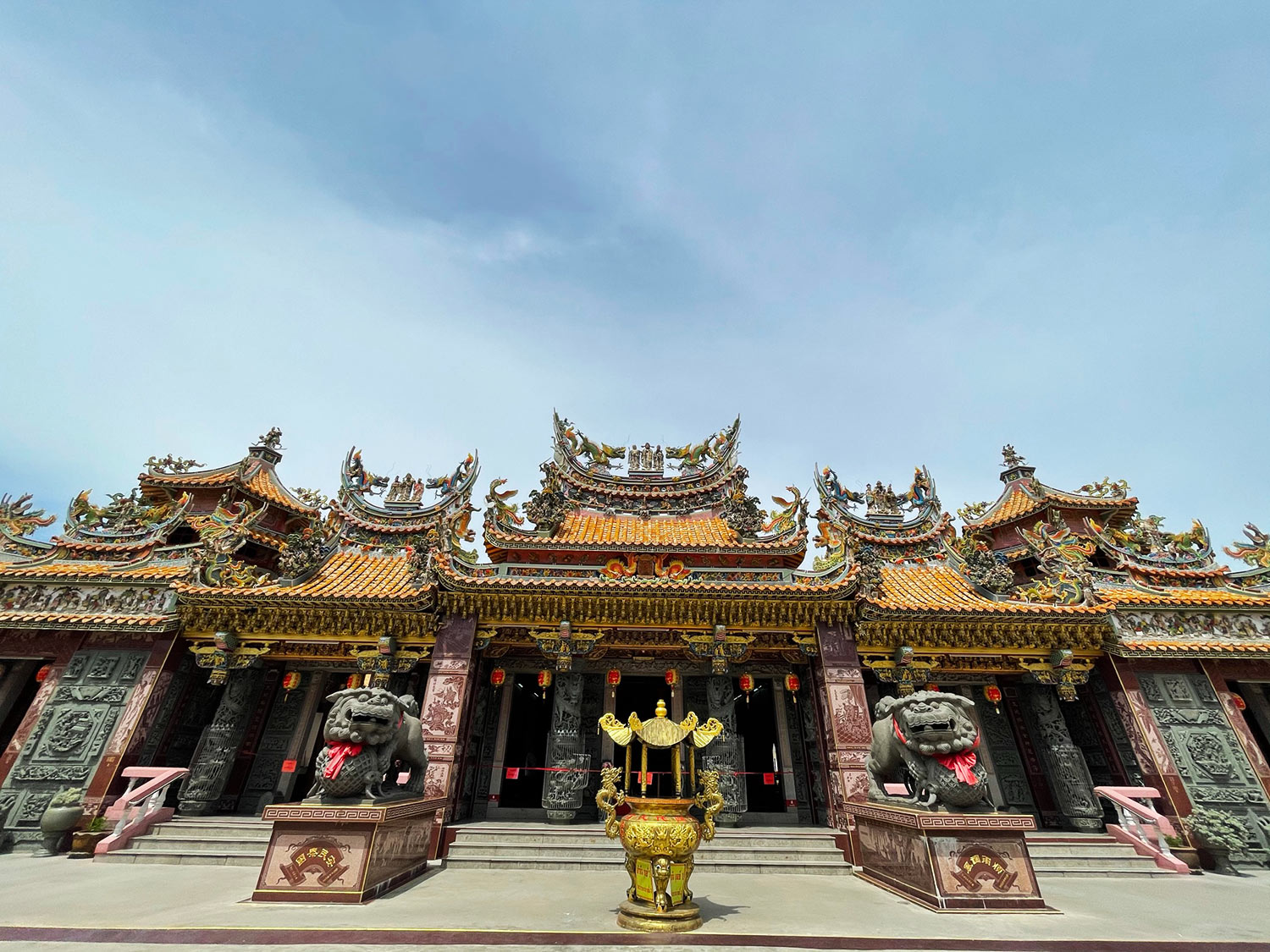 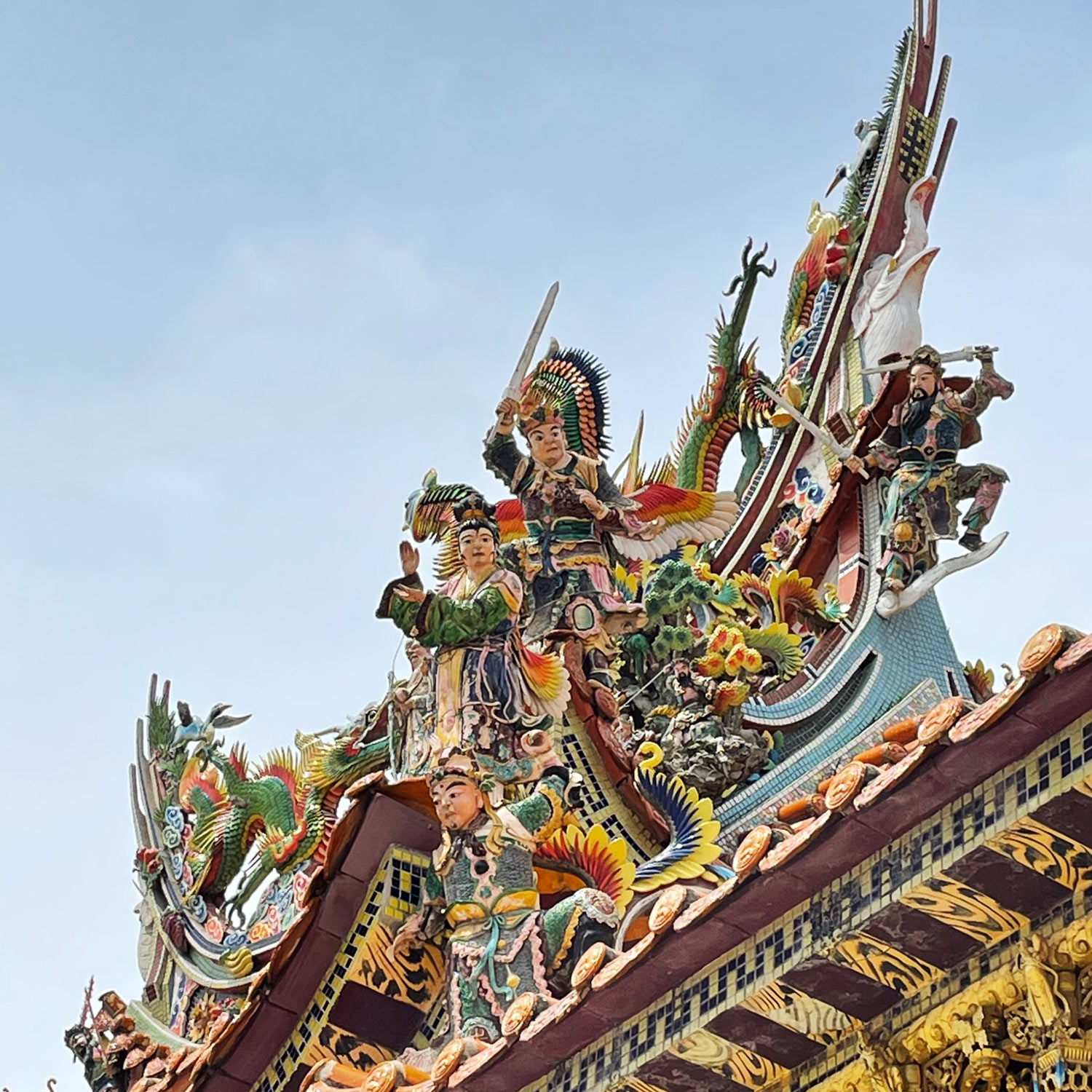 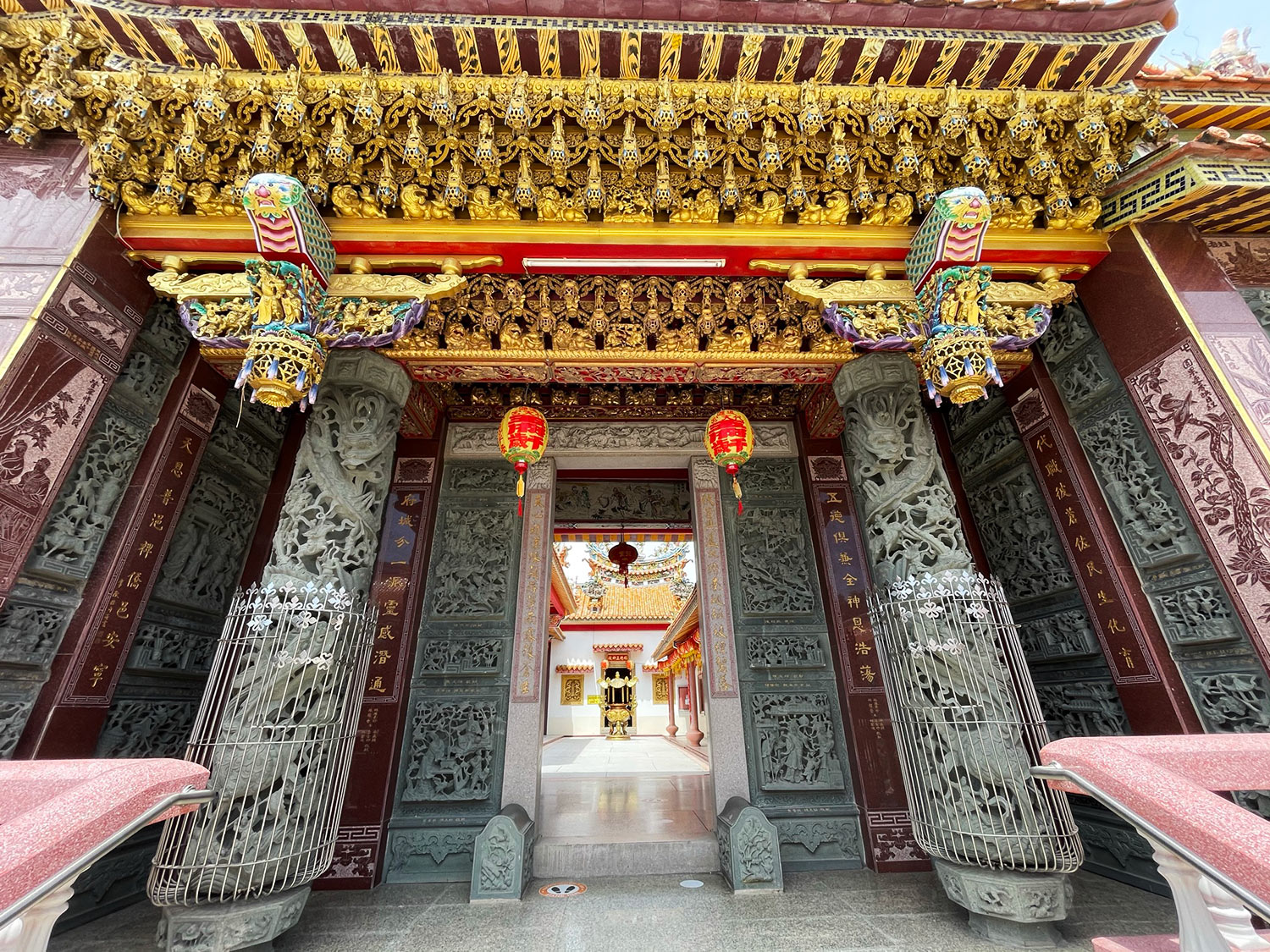 Every last Thursday of the month, Life highlights routes along the city's BTS and MRT lines for travel enthusiasts to explore the city.