A different side of the green lung
Travel

If riding around Bang Kachao isn't your cup of tea, taking a tour organised by Dasta is a great way to observe the rural life of local communities here and participate in unique workshops

Last summer, I dreamed of a fun cycling tour and taking in the fresh air while boarding a ferry from Wat Bangna Nok to Bang Kachao in Samut Prakan, which has long been a popular cycling route among local and foreign tourists to explore Bangkok's "green lung". 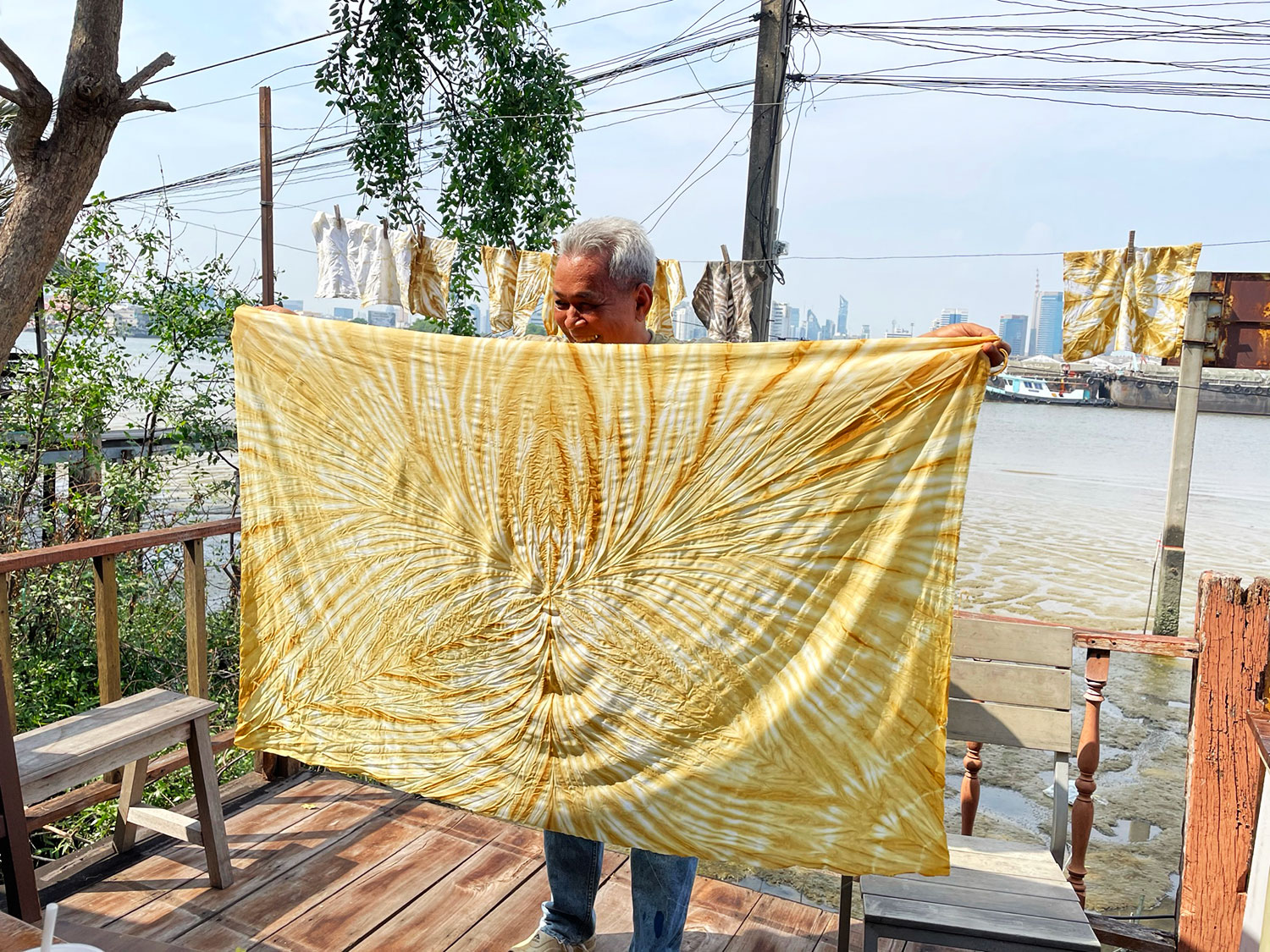 The dream was unlike what I experienced in reality. During a scorching hot day, I found myself dying on a spiral road after spending a half-day paddling around and getting severely dehydrated. I finally had to give up and ended up at a cafe instead.

However, I again visited this verdant urban forest on a two-day trip, organised by the Designated Areas for Sustainable Tourism Administration (Dasta) and KTC as part of the "Kid Thueng Chumchon" (Miss The Communities) project to help 40 communities affected by the Covid-19 pandemic. Upon my return, I found that there were several ways to observe the rural life of the charming riverside communities along the banks of the Chao Phraya River.

Just a 30-minute drive from downtown Bangkok, I arrived at Wat Pa Ket, whose ubosot was designated a historical site by the Department of Fine Arts in 1967. Erected in the reign of King Rama II, it boasts beautiful Ayutthaya-style architecture and an old masonic structure, while its unique carved wood gable depicts the god Narai riding a garuda catching a naga.

"This ubosot underwent a major restoration between 2006 and 2007. The brick structure was painted white to give it a fresh look and its wooden gable was recreated after the original one was moved to the Department of Fine Arts," said Prempree Trairat, president of Suan Pa Ket Nomklao club who served as our special guide.

Inside, the ubosot houses a sacred statue of Luang Po Yai in a posture of subduing mara with the walls covered in murals that recount Buddha's life and the Jataka tales. Using traditional techniques, they were created in the reign of King Rama III and used natural colours made from gum, local plants and flowers. 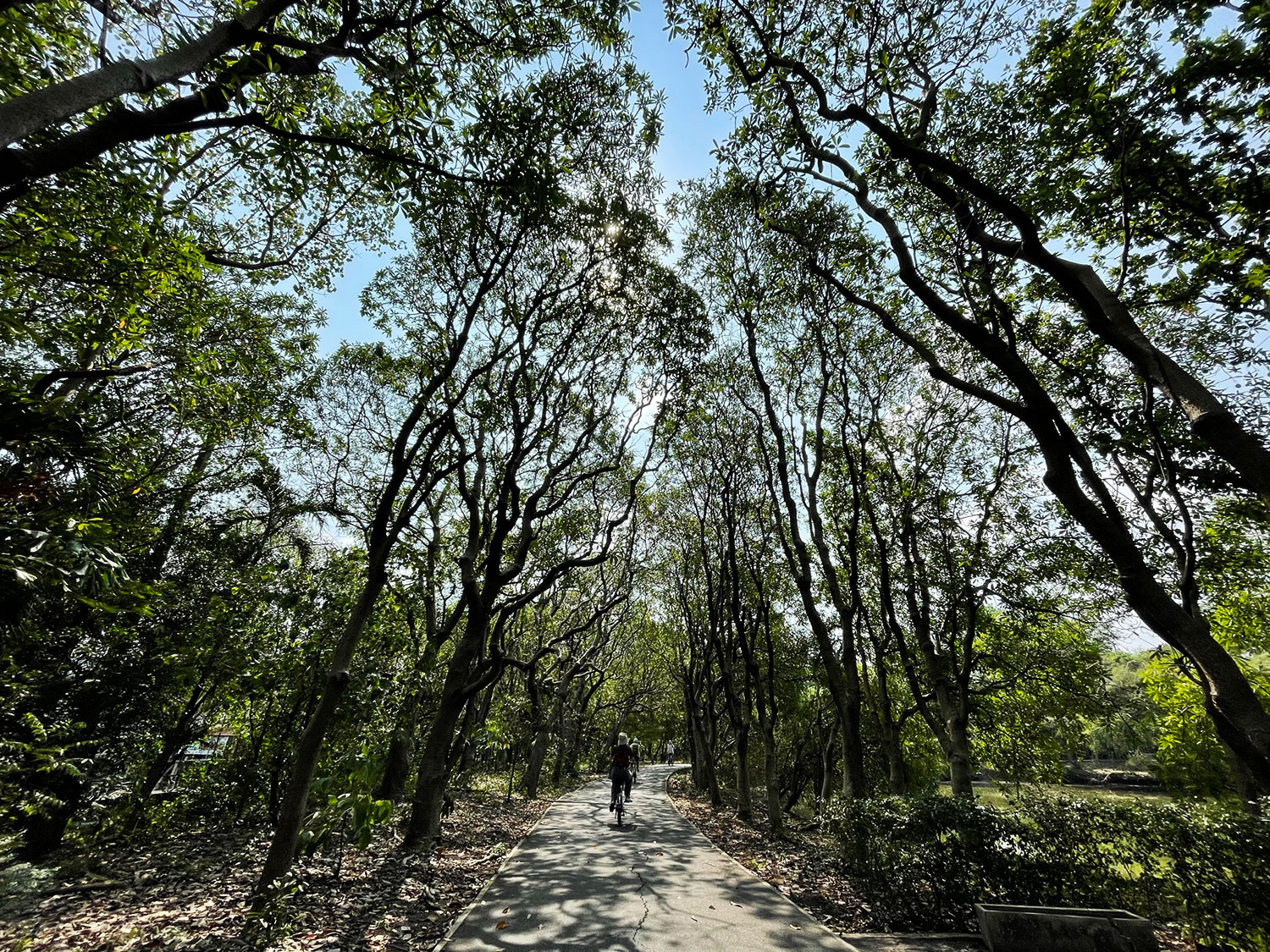 Sri Nakhon Khuean Khan Park is one of the most popular spots for a cycling tour. 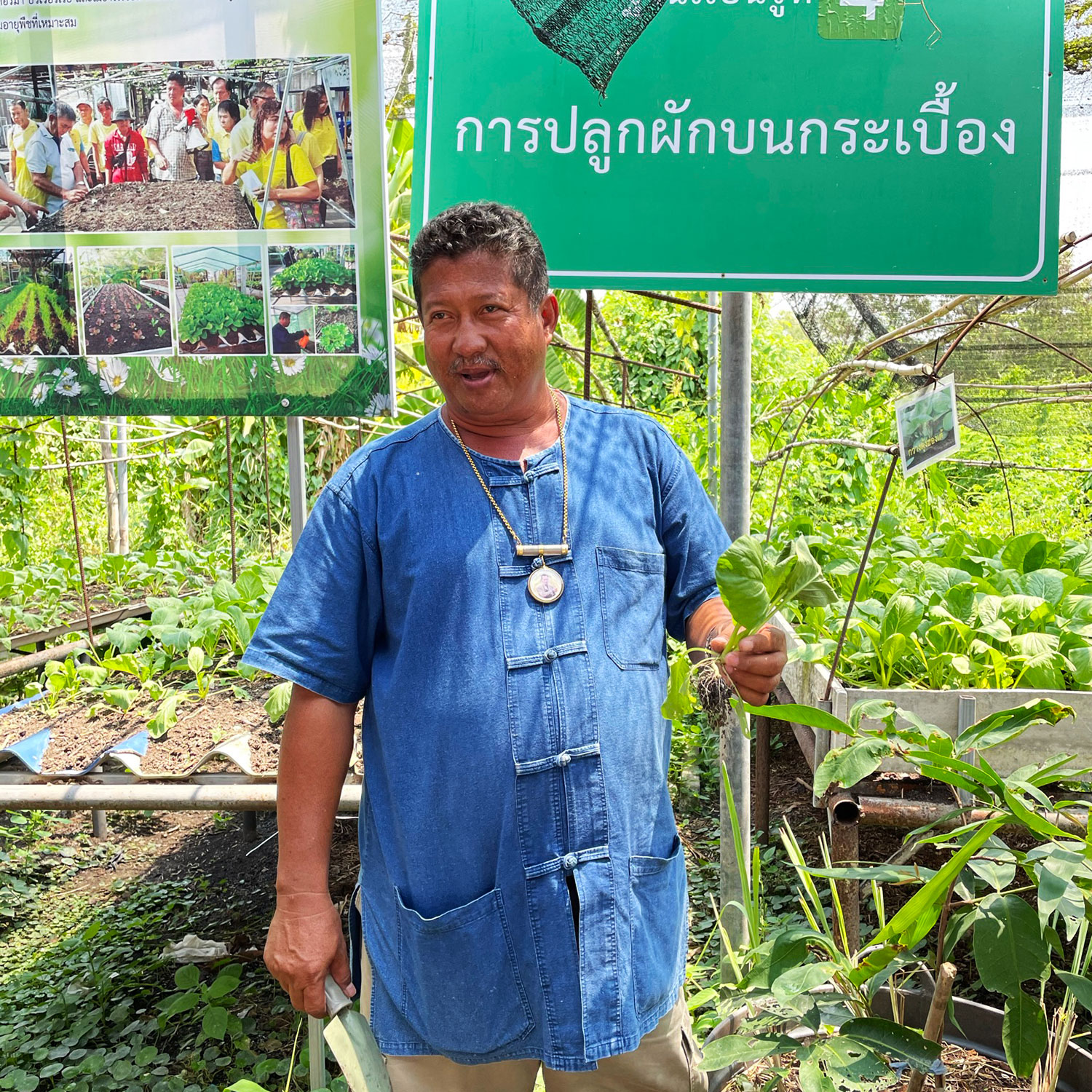 Nearby, an abbot's 100-year-old teak house has undergone renovation also to turn it into a community museum to celebrate local wisdom and craftsmanship. On view are astonishing murals on the wooden walls that illustrate local life, Thai traditions like a funeral ceremony and landscapes in the waterside communities.

Hemmed in by greenish orchards and canals, we walked through narrow alleys and discovered Suan Pa Ket Nomklao Urban Community Forest and a learning centre, which is run by the Song Kanong Network to promote sustainable living and eco-tourism.

Spread over a plot of 63 rai, local villagers have been growing more than 80 kinds of plants to rehabilitate the ecosystem since 2006. With an aim to boost the green lung, most plants can grow well in areas of brackish waters and become the main food source for local birds.

"I'm just a housewife who wants to bring our home back to life. One day, I noticed that the forest was about to disappear from our community so I started planting trees and flowers in my house before sharing my ideas with neighbours. We set up the Song Kanong Network and a group of specialists from Kasetsart University educated us on how to create a verdant urban forest using a mixture of local wisdom and modern solutions," Prempree said. "The lands are now blanketed with towering trees and plants such as black mangrove, shoebutton ardisia and Indian oak which have become economic plants in the community. For instance, the shoebutton is used to produce tea, yam and herbal extract, rich in antioxidants."

The learning centre welcomes visitors with a variety of interesting handicraft workshops. We chose to learn how to seed shoebutton ardisia and black mangrove as well as how to make home decorative items from coconut shells and other natural materials.

Not far from the Suan Pa Ket Nomklao Urban Community Forest, veteran artisan Praphat Thaicharoen has converted his riverfront house into a studio offering a workshop on how to tie and dye a scarf. He has developed several tying techniques to create new intricate designs and uses different local plants to mix his own unique colours. For example, nam dok mai mango leaves are for yellow, Indian almond for yellow-green, nipa palm bark for brown and sappan for pink. He also blends kram from Sakon Nakhon with limewater, tamarind and sugarcane to produce quality indigo. 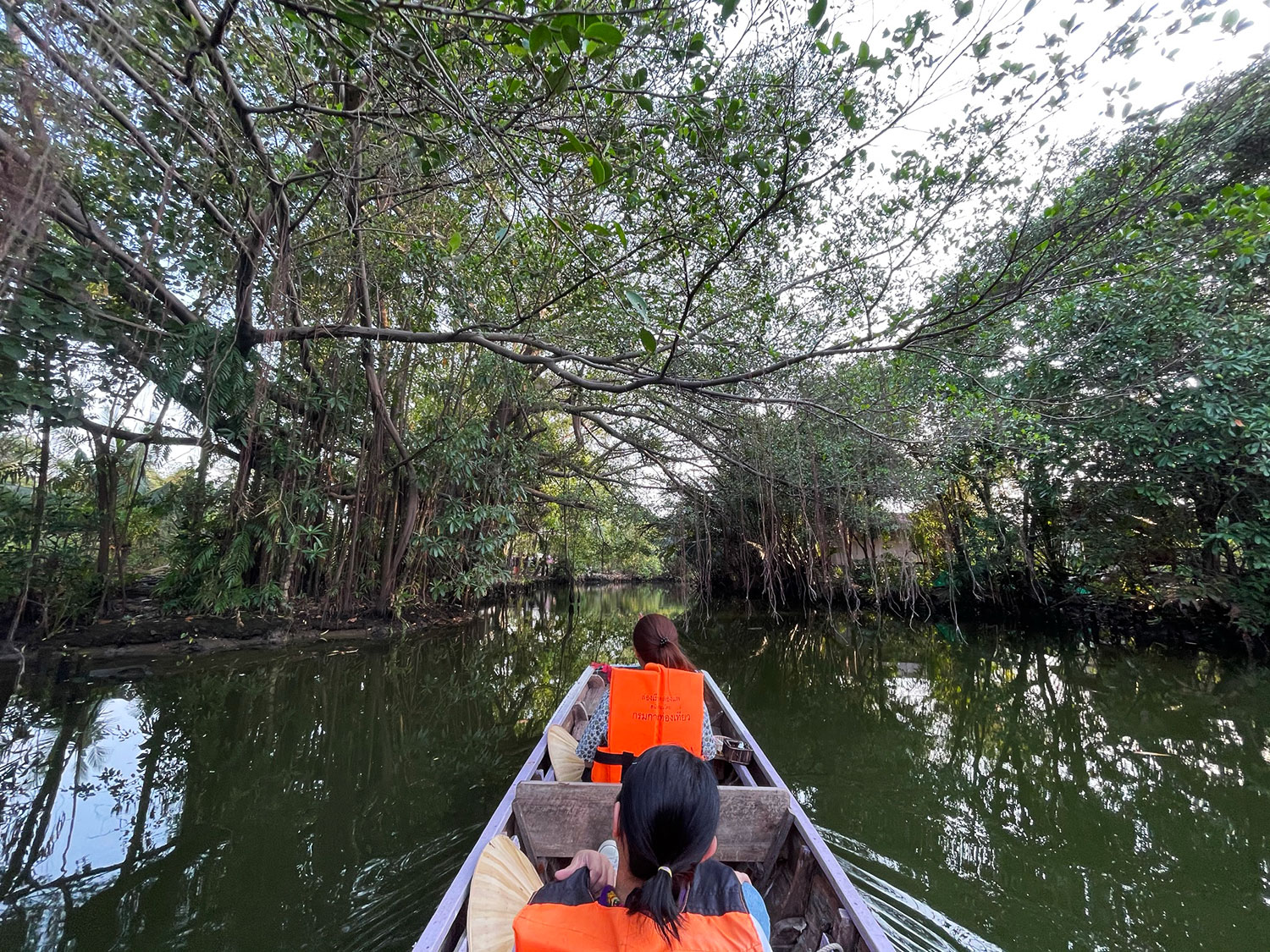 A cruise along Klong Ban Phae transports passengers back in time to when this canal was used as a main transportation route. 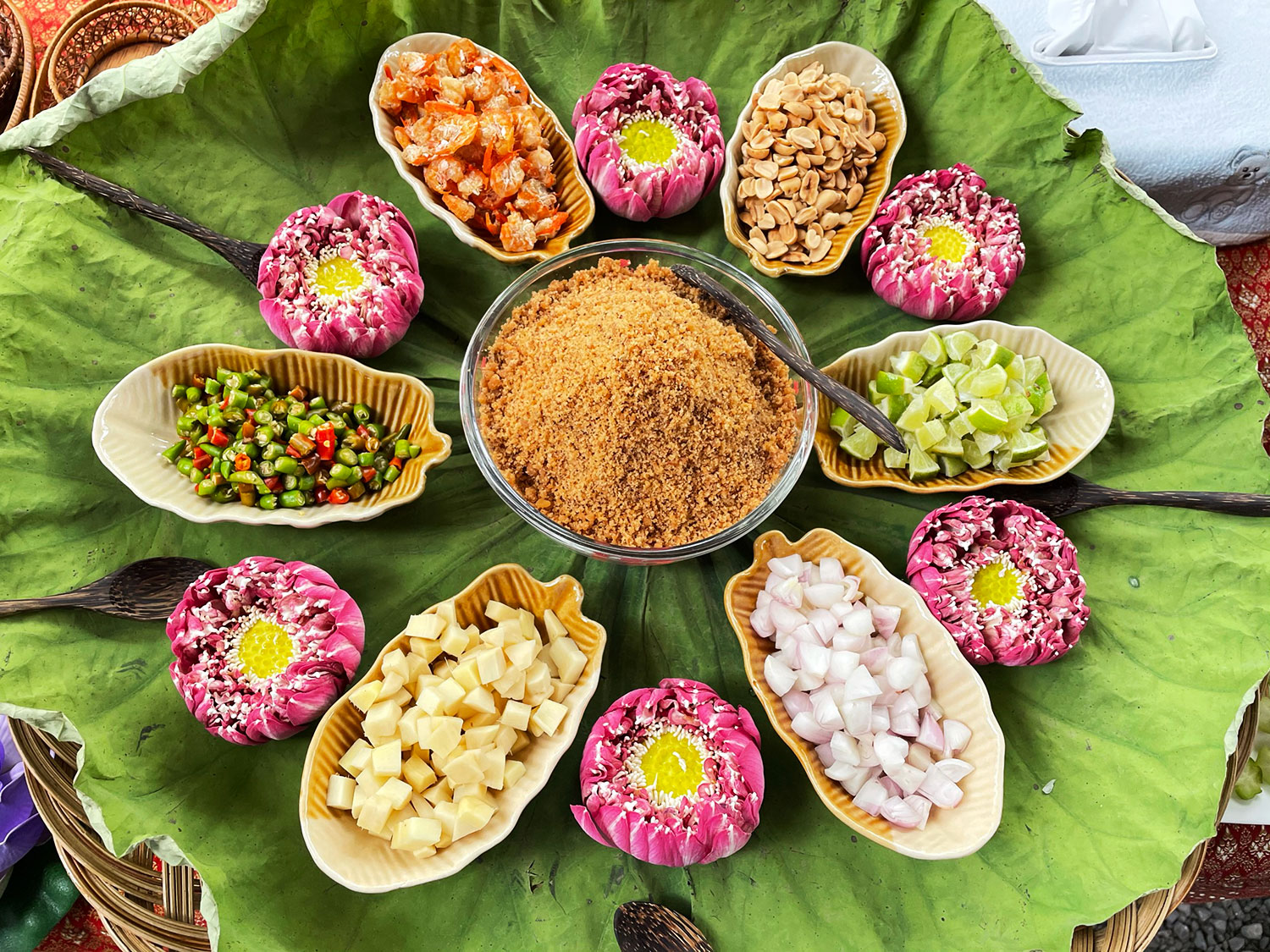 Bang Kachao Agricultural Market is a learning centre for organic farming and livestock.

Later, we continued to Bang Kobua Tourism Club's headquarters and took a break with a 15-minute herbal foot spa treatment. To help their families generate income, a group of female members enrolled in a Thai massage course at Wat Pho and serve as therapists during their free time.

They have developed multipurpose herbal oil made from seven kinds of local plants to help relieve health problems. For example, sea holly can get rid of prickly heat, ringworm bush can help boost the lymphatic system, cumin can heal a wound, tamarind leaves can ease tight muscles, and kaffir lime and lemongrass help refresh your mood and body.

After a relaxing foot spa, we walked along a wooden walkway to a dock, where a fleet of colourful canoes stood for a pleasant boat trip along Klong Ban Phae. This canal was once the main transportation route for locals to cross the Chao Phraya River to Klong Toey and Phra Khanong districts in Bangkok.

Lined with old houses and a dense jungle of nipa palms, club chairman Sittipong Phothaworn showed off his talents by composing a boat song to recount the history of the Chao Phraya River and the way of farmers and riverside communities. With the number of tourists decreasing, the canal now looks lonely and has become a temporary sanctuary for monitor lizards to escape the city chaos.

"In the past, farmers used this canal to transport their produce like fruits and coconut sugar to the mouth of Klong Rong Si, which was a popular trading hub for vendors from Bang Na," Sittipong explained while paddling a boat.

"At the same time, Klong Ban Phae linked three neighbourhoods and the lands were covered with a shady cork forest. So, Bang Kachao was considered the Venice of the East.

"Later, a watergate was built at the mouth of Klong Ban Phae to prevent saltwater inflow and flooding but it also made the canal shallower and narrower. At the same time, nipa palms have been planted to replace orchards and other local plants." 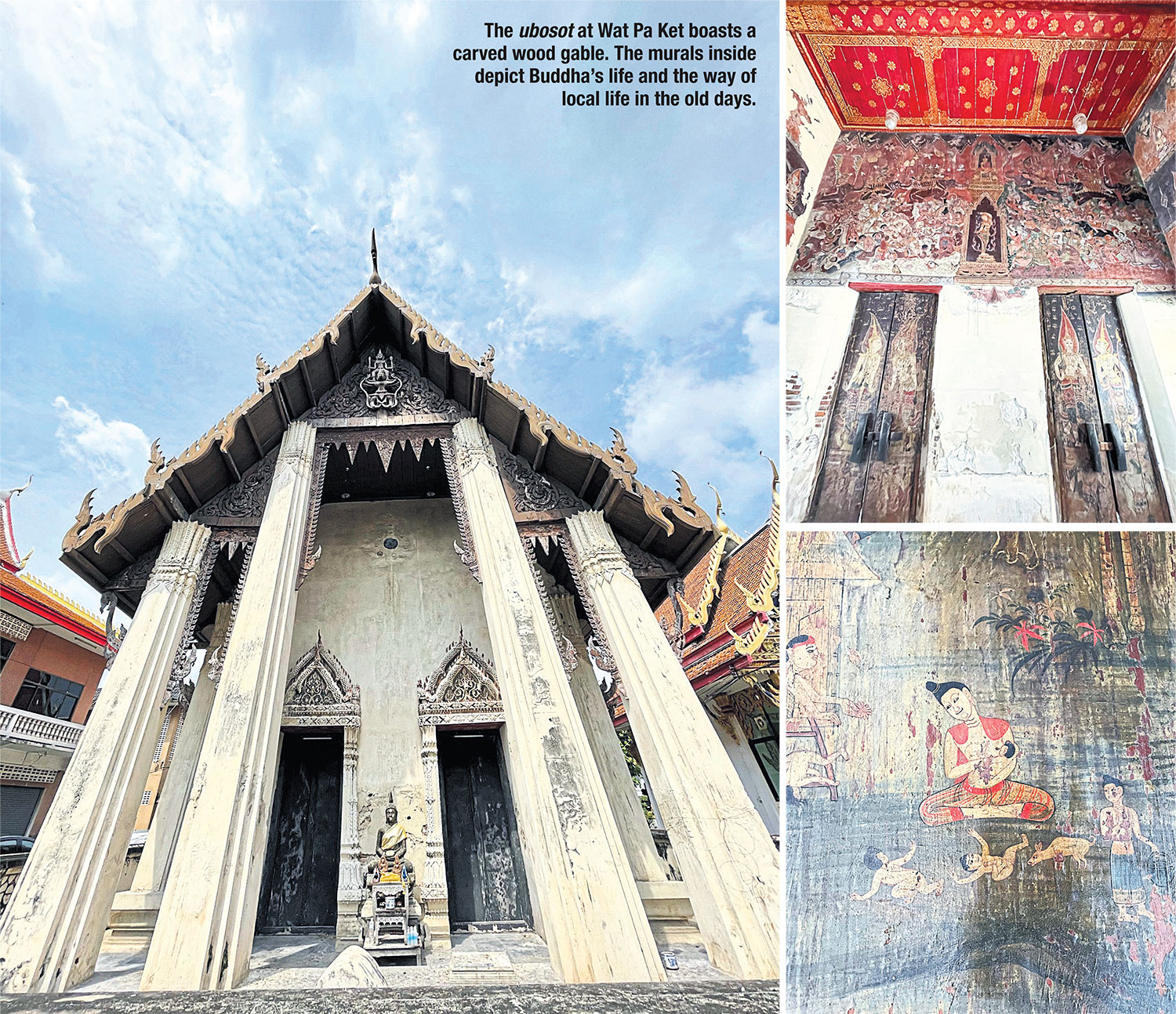 After coming ashore, it was time for afternoon tea and we were spoiled with a popular dish called miang kleeb bua. Fresh red lotus petals came with dried shrimp, peanuts, sliced lemons, chilli, shallots, ginger and salt-chilli dip mixed with coconut sugar, while sour bilimbi juice was served to refresh our mouth. For dinner, we checked in at a riverfront restaurant to enjoy fresh seafood and watched the nightlife along the Chao Phraya River.

The next morning, we started with a cycling tour to explore Sri Nakhon Khuean Khan Park, which sits in the heart of Bang Kachao. It occupies 148 rai and was designed to be a learning centre for local residents and tourists who want to know more about the ecosystem and enjoy fun leisure activities.

The park provides a bike rental service and the smooth bicycle lanes led us to many popular photogenic backdrops like a long bridge over the lake and a tunnel of nipa palms. It is also a popular bird-watching destination, home to more than 100 species of local and migratory bird such as Indian roller, white-throated kingfisher, coppersmith barbet, rufous woodpecker, orange-breasted green pigeon, peregrine falcon, Asian paradise-flycatcher and blue-winged pitta.

Not far from Sri Nakhon Khuean Khan Park, our next stop was Bang Kachao Agricultural Market, which is run by Sompong Rasamitat, the tambon Bang headman. Set up three years ago, it's designed to be a learning centre to educate local villagers about organic farming and livestock, while tourists can buy fresh produce and enjoy a meal under the theme of farm to table.

"I used to run a construction company for more than a decade but as I got older, I wanted to get back to the basics and promote sustainable living in the community. I became a self-taught farmer and spent 6 million baht building a learning centre to share my knowledge with others," Sompong said.

Roaming around this 6 rai centre, visitors can learn how to plant organic vegetables and herbs like bananas, salad vegetables, bok choy and cannabis. There's also a demonstration on how to raise earthworms to produce fertiliser and how to breed Phuphan black bone chicken, hybrid chicken, goat and rabbit.

In the late afternoon, we headed to Suan Rim Klong Mu 4, which is situated in tambon Bang Krasop and our trip ended with a workshop on how to craft an eco-friendly flower pot with leftover coffee. This has become a popular activity where tourists can design their own.

"More than 20 cafes have popped up around the neighbourhood of Bang Krasop to serve tourists and leftover coffee brings waste to our communities. To introduce a smart solution, we've turned them into a collection of flower pots that can absorb water and also reduce plastic debris," said Boonyapa Sirodom, president of Bang Krasop Tourism Club. 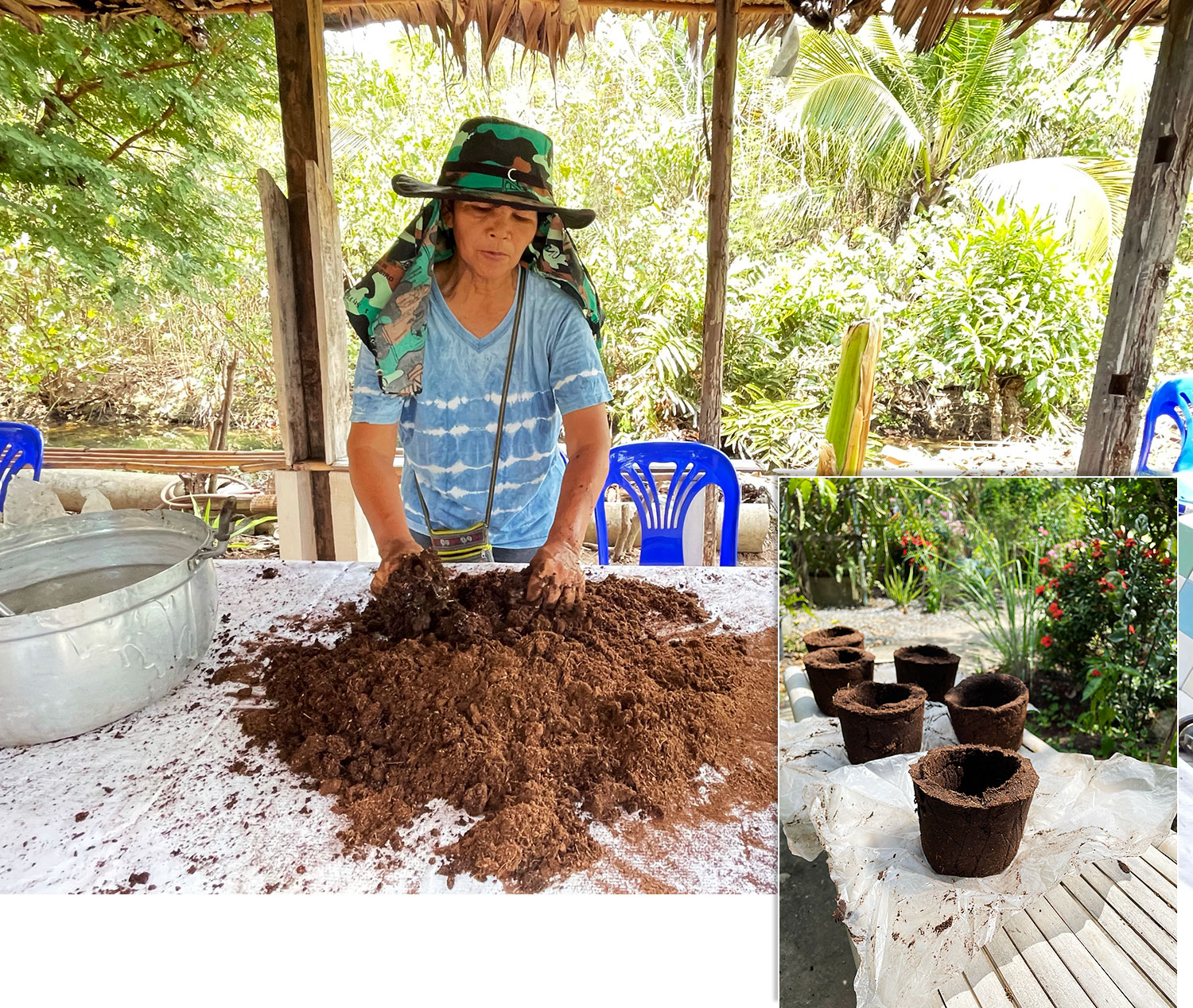